Over the past few years, the U.S. military has been looking towards the games industry in an effort to try and reach out to younger audiences for recruitment. One of those avenues is by reaching out to audiences through streaming, mostly via the army's own esports team. However, new internal documents have shown that there were once plans in place to pay a variety of different organizations and Call of Duty streamers to help raise its stock amongst young people, specifically women and Black and Hispanic people.

This is according to Vice, who has shared internal army documents from Motherboard detailing several streamers and organizations and how much money they'd receive. From what can see in the document, the bulk of these millions would have gone to a couple of esports leagues, specifically the Call of Duty League esports tournament and Twitch's Historically Black Colleges and Universities Showdown.

These documents also reveal the names of several popular Call of Duty streamers that would have received hundreds of thousands of dollars had the plan gone ahead. These streamers were apparently going to be offered money to make original content "showcasing the wide range of skillsets offered by the Army." They were also going to be asked to "familiarize [their] fans on Army values and opportunities," and also could've potentially set up tournaments in which soldiers would participate. 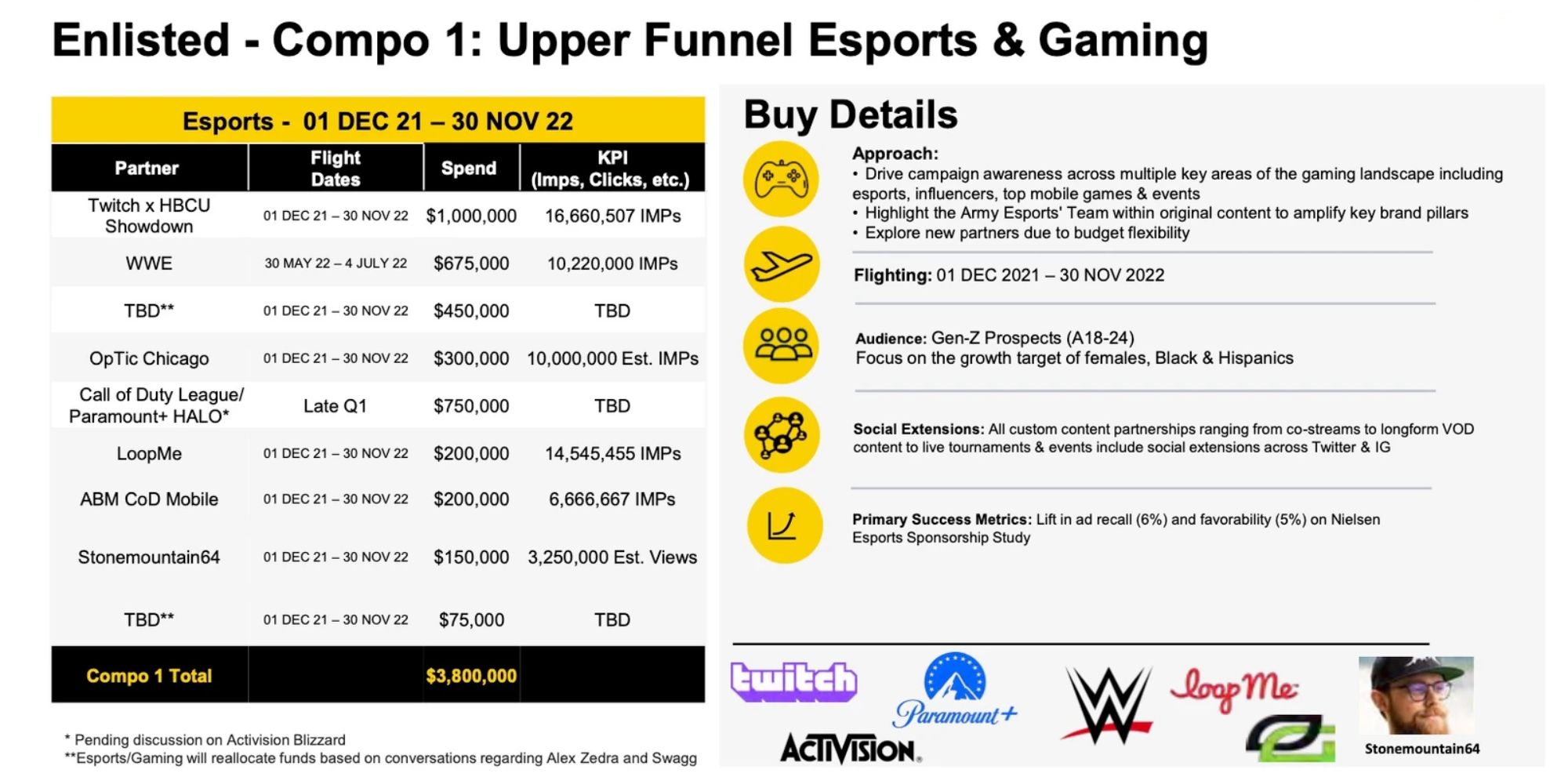 Of the streamers, Stonemountain64 would have been one of the biggest benefitors, as they would have been offered $150,000 for their services. YouTube streamers Swagg and Alex Zedra were also going to be offered money, although it's unknown how much or whether they would've been interested or not. It's also worth noting that the army was also planning to spend $300,000 on OpTic Chicago, an esports team they've worked with in the past.

While it raises questions over morality, these offers aren't too surprising. Not as surprising as some other organizations that were going to be approached though, as these documents also reveal the army planned to spend $675,000 on a sponsorship with the WWE. There were also plans in place to spend another $600,000 on gaming media outlet IGN, and a further $500,000 on the now cancelled G4 TV. We don't know in what capacity the army was going to work with these organizations, but it's baffling that they were going to be approached to begin with.

Thankfully, none of these deals will see the light of day. From what Vice tells us, these plans were thrown out after the stories of all of the sexual harassment controversies surrounding Activision Blizzard broke. With the Call of Duty rights likely to change hands soon due to the ongoing acquisition, it's fairly likely that these kinds of deals would now have to go through Microsoft, which has much more of a reputation to uphold. Still, it's another example of the U.S. army trying to recruit through gaming, and we'll see more attempts in the future.