Unless you've been living under a rock for the past couple of weeks, you'll know that Elon Musk is now the owner of Twitter. We're currently in a settling in period, as Musk and employees of Twitter are being hit with the realities of someone purchasing a social media site with money they don't have. Musk's attempts to have Twitter bring in more revenue have not gone over too spectacularly, especially his new plan to have users pay $8 if they want, seemingly unmoderated, verification.

Calling the entire situation a complete circus is being generous, and some users are even looking to other social media platforms to avoid going down with the ship. Cohost is emerging as a popular alternative, but Tumblr clearly smalled blood in the water and reallowed tasteful nudity back on its platform. However, one user has took matters into their own hands, creating their own social media site and branding it "New Twitter." There's just one major problem though – it's just a Google doc.

Anne Clark, writer and editor for Vulture, clearly choice violence today by setting up a blank Google doc and sharing it on Twitter, giving anyone with the link editing access to write whatever they please in there. The results were just as chaotic as you might expect, distilling the entirety of modern internet culture into a single place. That means you shouldn't be surprised that the first two images on "New Twitter" were Among Us and a cute cat.

"New Twitter" found its feet pretty quickly, bringing in hundreds of editors as the document expectedly descended into chaos. Discussions and posts ranged from people confused about where to type, how to treat intersex babies, to a single photoshop of a random man's face cruely plastered on top of an image of Ghenghis Khan. There were pages and pages of presumably jokes and memes, although you needed a computer built by NASA to get the thing to load properly. 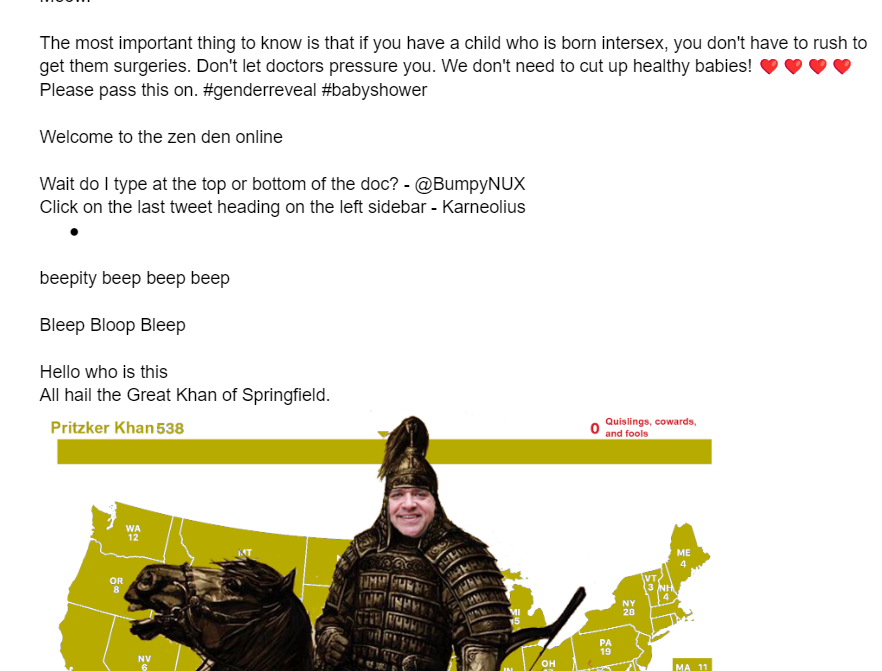 Clark then decided to set up "New New Twitter" since her original Google doc exploded in popularity. This document was just as chaotic, but you won't be able to access either "New Twitter" or "New New Twitter" anymore, because just like with anything fun and interesting that goes viral on social media, a small minority ruined everything for everyone.

The young social media platform was quickly set upon by either Elon Musk fans, trolls, or legitimate Nazis, as posts were deleted and replaced with drawings of penises and Swastikas. Noticing that things got out of hand and sensing that "New New Twitter" was never going to be the same again, Clark shut down editing access to the Google doc, which now simply reads "Fuck Nazis." A sentiment I'm sure most of us reading can happily get behind.