You are here:
Home / Turning My One-Bedroom Apartment Into An Arcade To Save My Sanity

As you might expect by someone who looks, sounds, and acts like me, I live alone. I’m lucky in that regard – not everyone is as fortunate as me. Which is really saying something that someone in their late 30s has to be ‘lucky’ to be able to use the bathroom whenever they want. Oh, the world of the future that we live in! What wonders shall it bestow us next?

But while I’m lucky enough for my weeping to be only heard by myself and thousands of roaches, my apartment isn’t particularly big. I live in New York City, where if you work hard and believe in yourself, you might get what’s best described as a 'fun-size' kitchen with a fridge that’s almost as big as the real thing. The place also doesn’t get much light. My apartment building is relatively large and horseshoe shaped – with my specific unit on the inside bottom corner of said horseshoe. In other words, I get hints of sun from approximately 11:35AM to 12:05PM. Darkness is cheap, and Scrooge liked it.

Throughout the first few years of my stay in that apartment, none of this was a big problem. In fact, it was kind of nice. I could go to work in the outside world and then return to my hovel in which I could play video games in complete shadow like our lord intended. Saturday morning cartoons? Saturday afternoon cartoons? Saturday night cartoons? It was all the same.

Like a lot of people, my job went remote during the pandemic. I’ve worked from home ever since. And it’s been fine. A lot of people, for a lot of reasons, need remote work to be able to give flexibility to lives that were essentially put in a blender. Others hate remote work because it deprives them of the ability to yell at their employees in person. Labor is a spectrum of suffering! 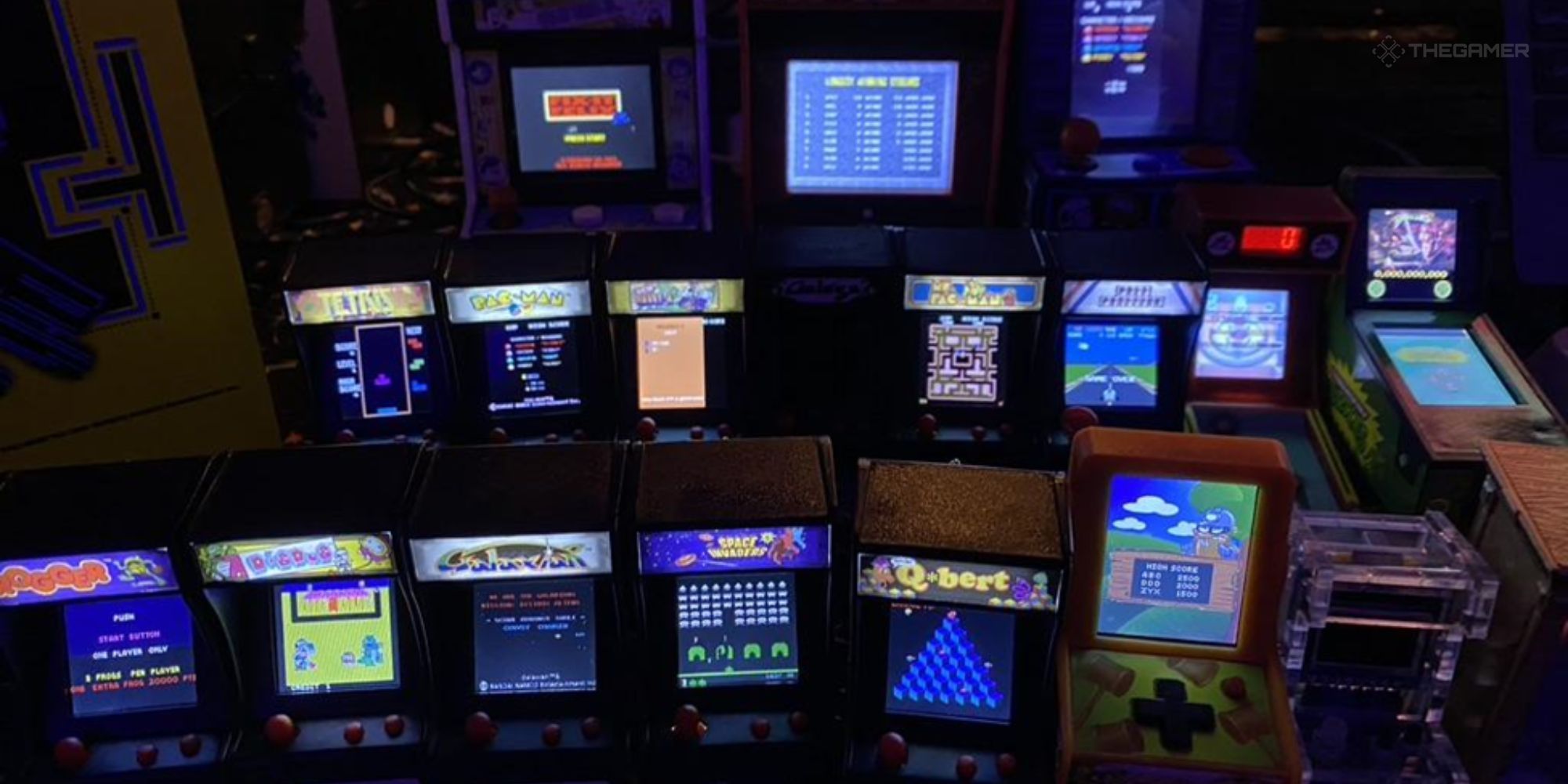 I’ve now spent two and a half years working from home. Living alone and working from home while your apartment doesn’t experience the kiss of God’s light can be a little hard on your mental health, it turns out. It can break your brain a bit when the only light to greet you in the morning is a panicked Slack. And that’s when I was lucky enough to have a regular job.

At a point, I realized the space was breaking me. So I did something for myself that I’d never done before: I rearranged my entire apartment to become an arcade.

Since I’ve only spent my adult life in apartments in large cities, space has never really been one of my biggest resources. But I do like tiny things, and I have spent years collecting tiny arcade machines. Growing up, arcades were a screeching place of peace, where I could relax and just find joy in tiny moments of losing to big kids in Mortal Kombat. They’re my Rosebud, which, spoiler alert, was a sled. 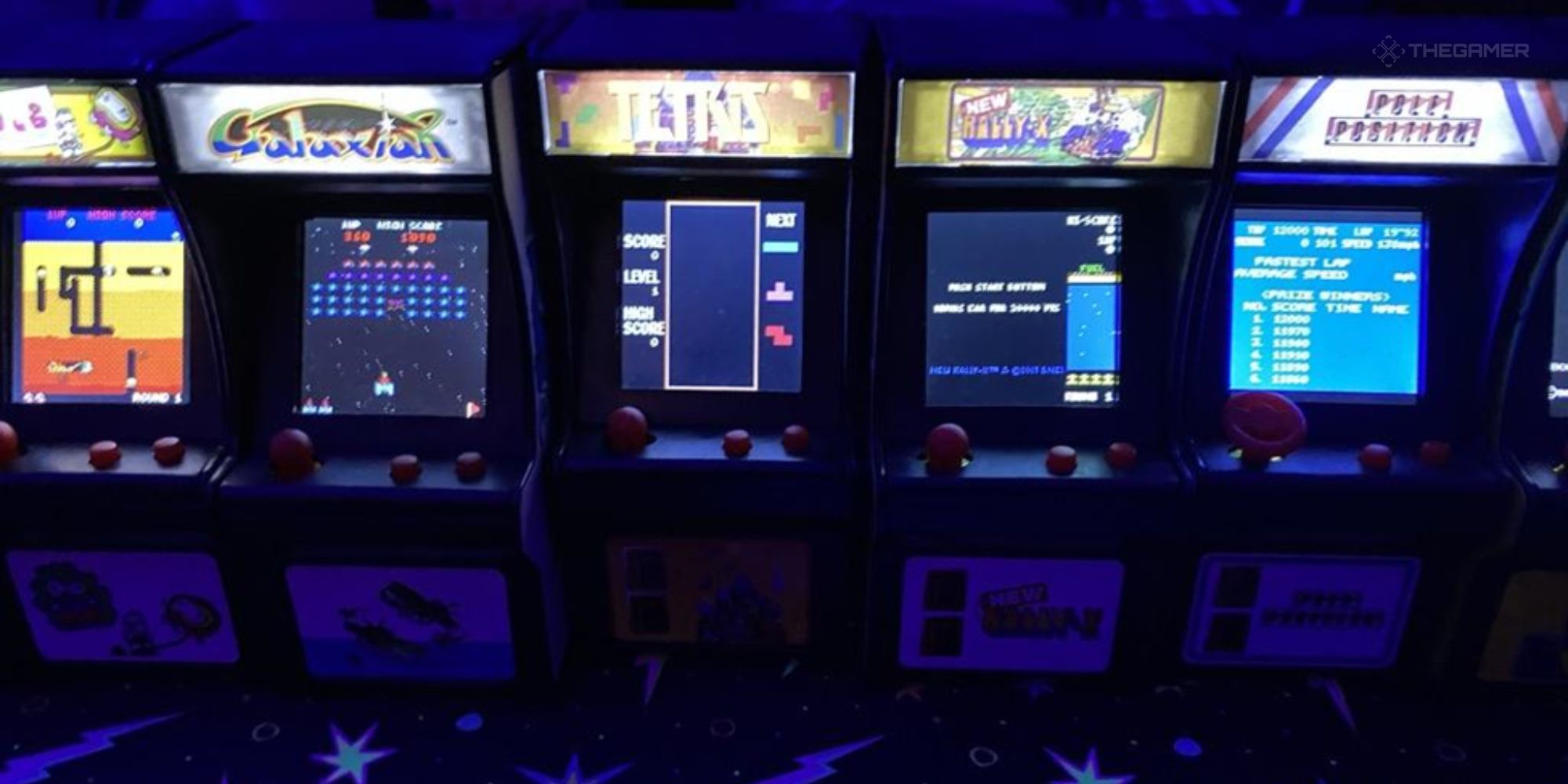 Most of my tiny arcade had actually been in my office at work. I never really played them – it just seemed like something to put on my desk because why in god’s name would I put out photos of my family? As our offices closed, those little arcade machines were shipped to me in banker’s boxes and they came home to mama.

And that made this all possible.

Color-changing lights from my room were swapped into the living room. I set up a projector on the far wall to play old video game commercials from the ‘90s (and then, in later arcade constructions, movies like The Wizard). I turned one of those old planetarium star projectors on the bathroom ceiling for effect. I made it a whole purple/dark blue mood. 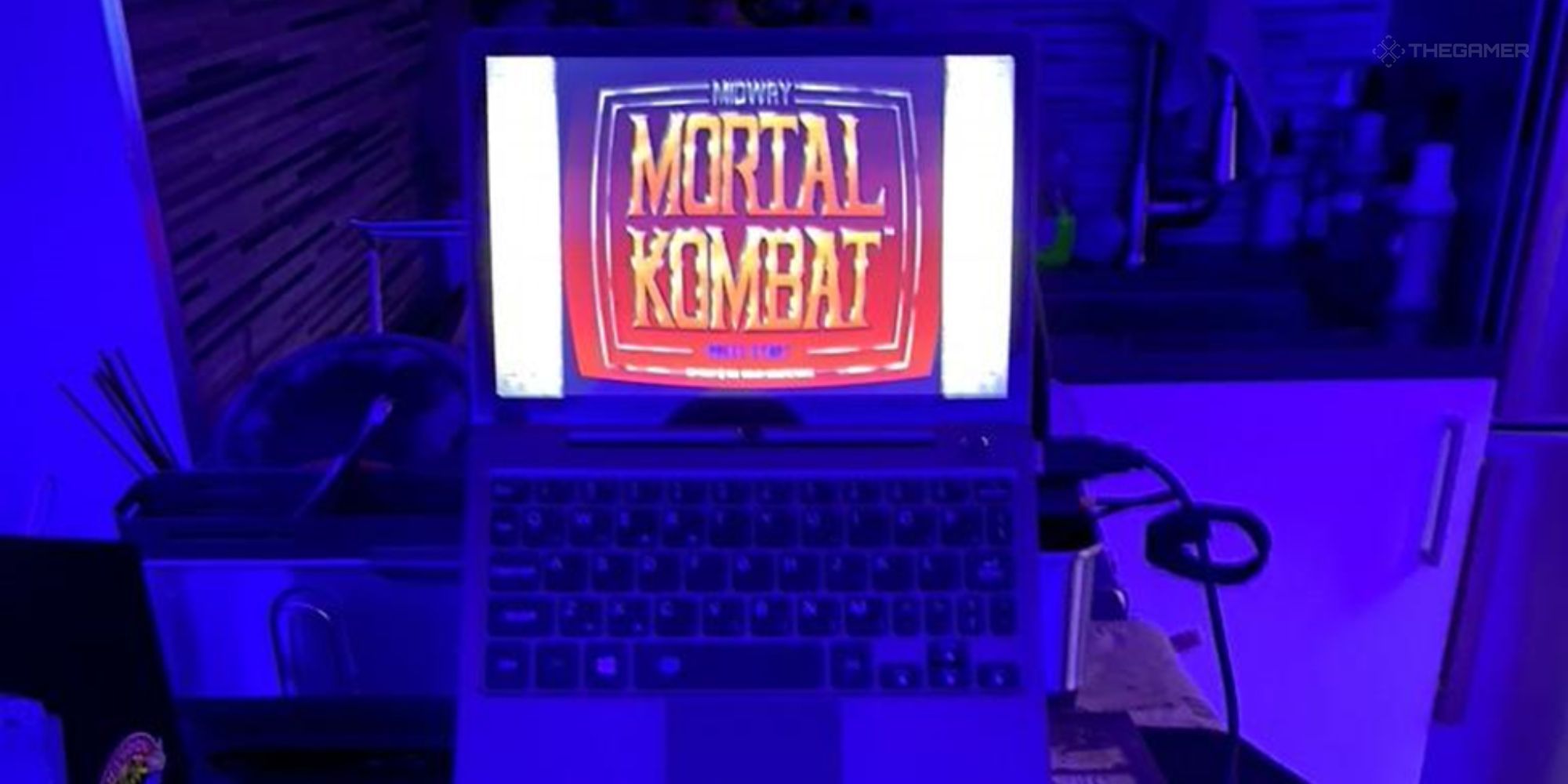 I also took the liberty of buying ‘prizes’ and ‘tickets’ on Amazon. Is this stupid? Yeah, this is stupid. But I spread out little cheap plastic prizes and assigned point values to each one. Then I laid out my arcade – including toys such as a miniature Whac-a-Mole game and Skeeball machine – and gave each one of those a price label. The tiniest arcade machines – which usually replicated older classics – cost a quarter. The bigger machines and emulators attached to an arcade stick cost fifty cents. Wii light gun games and playing Mario Kart using a Labo cardboard steering cost one dollar. Doing a virtual reality roller coaster in my Quest headset was two dollars.

Why assign a cost? Oh, baby, because I just happened to have a full cup of arcade tokens from my local Barcade. So I literally had arcade tokens and assigned arcade prices to tiny arcade games in my tiny apartment. None of which mattered. This was all fake.

Still! Not one to rest on my laurels, I baked a confetti cake (for myself) and threw together nachos (for myself). In future arcades, I’d switch to pizza – usually finding the lowest quality imaginable to match the feel of the arcade. 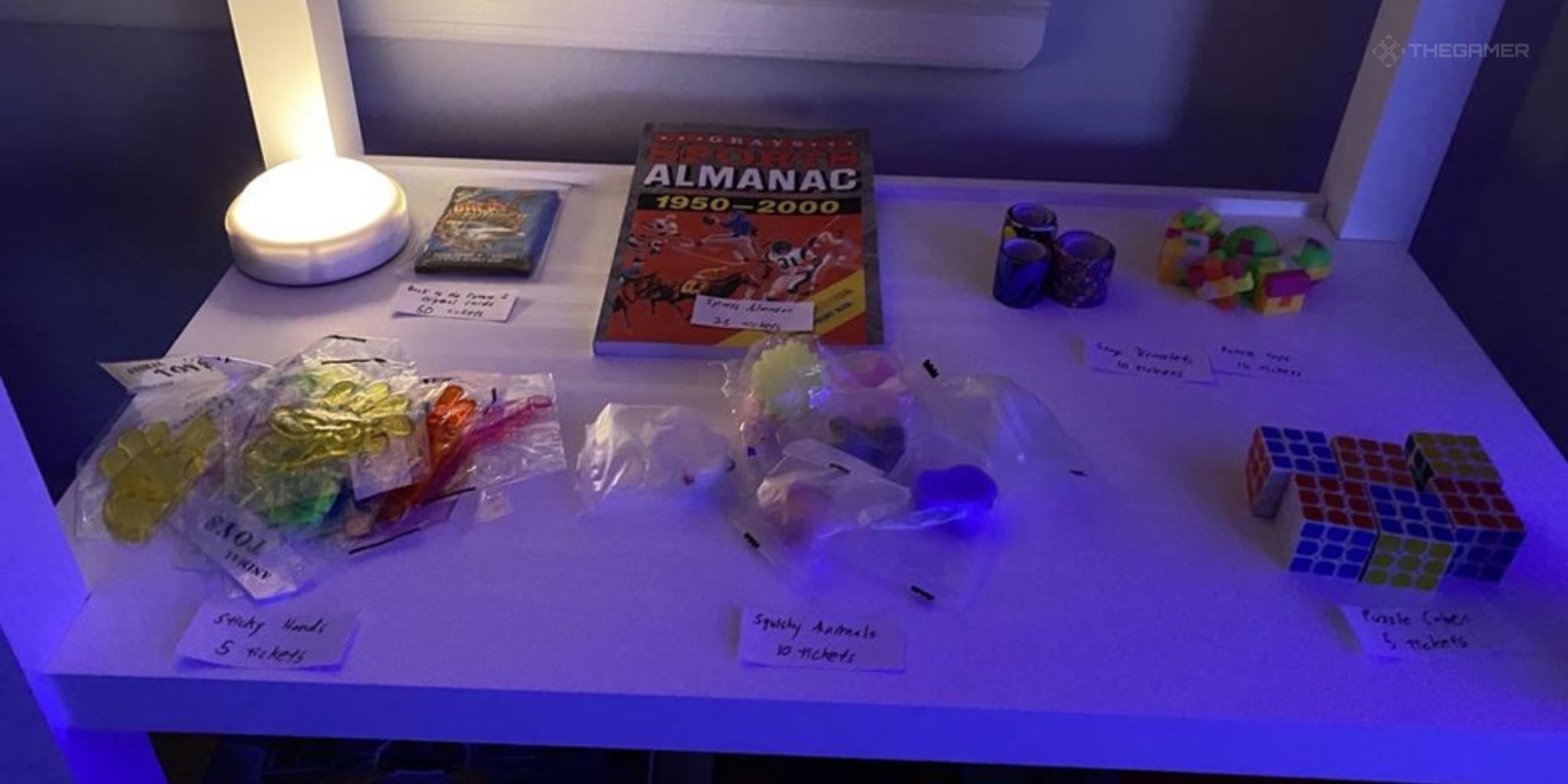 Again, I recognize how weird this is.

But it worked. And it still works.

There was something kind of comforting about immersing myself in a different space – especially in the early months of the pandemic when that literally wasn’t an option for me. It felt like I had taken a small apartment space and broken it out into something much bigger. I blasted ‘80s and ‘90s songs over my speaker. It was stupid. It was fun. I ‘spent’ a lot of money. I finally beat Mad Dog McCree for the first time in my human life. If you don’t know what that is, don’t worry – you shouldn’t.

The first time I did it, my weird magical toy arcade was a vacation. I felt normal in a way that I hadn’t felt in months. It was dorky and silly and ridiculous, but it was so nice to just be ridiculous for a little while. It had felt like forever since I did something pointless. Weirdly, it felt less like a nostalgia trip and more like I had an entirely new room in my home – one that was bigger than the home itself. I still felt like an adult, but I had more space to move in while finally getting a chance to breathe. 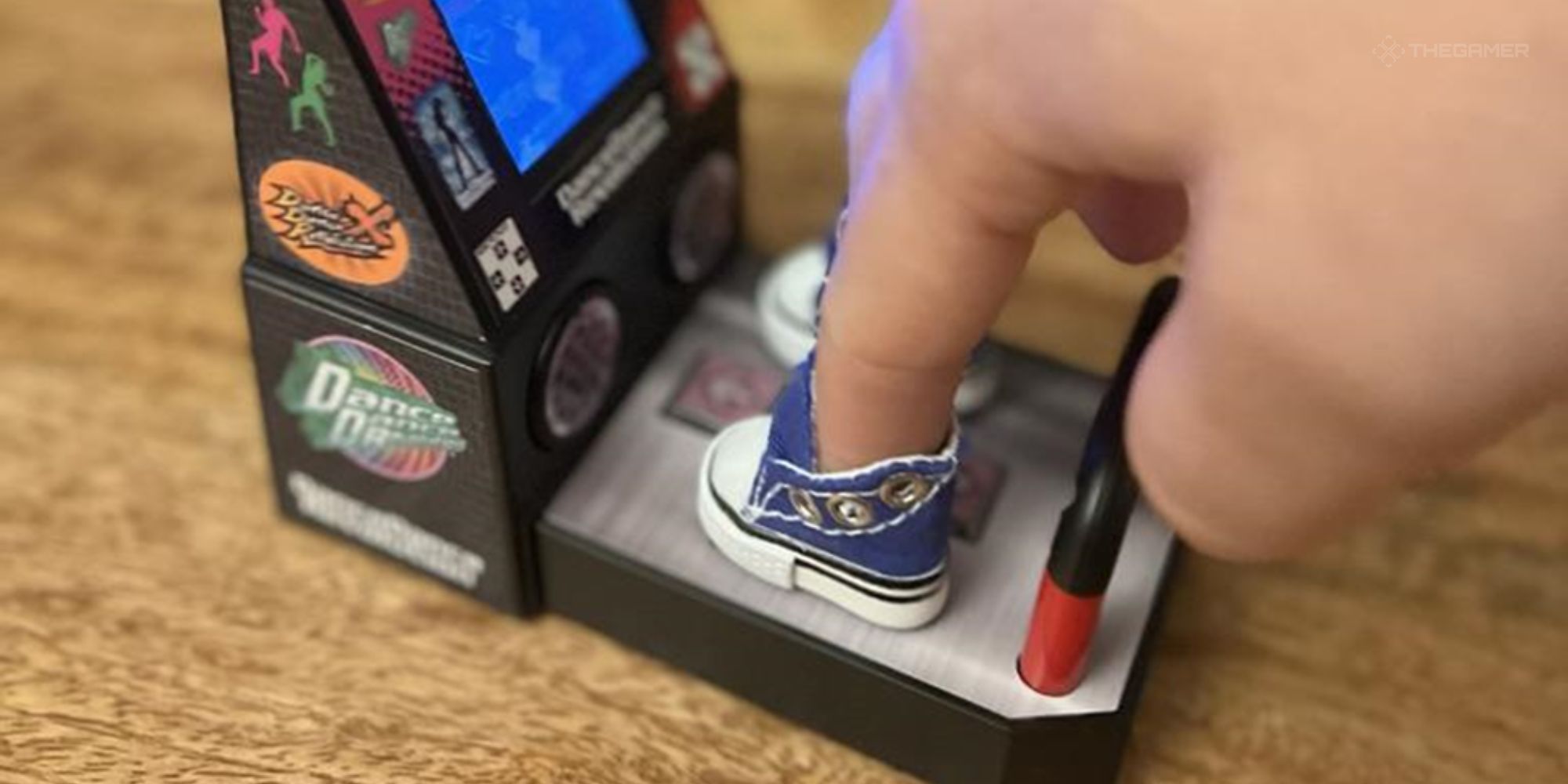 And then I kept doing them, although rarely. I’ve found that recreating an entire arcade in your apartment by moving furniture and buying props isn’t exactly sustainable. Nor is it a magic trick that easily works. But when it works – with a little unironic sense of wonder – it’s something beautiful. When things returned to a different kind of weird, I even brought a date over while I did it – who was perfectly nice about how fucking strange the experience must have been for her.

I sometimes get jealous of my friends who have the room for full arcade machines. Mostly because they can afford a house, not because they have the arcade machine. But by throwing myself the stupidest pity party in the world, I found that I could create an entire place for myself… that just happened to occur inside an entire place for myself. I was able to have my arcade. I was able to eat birthday cake and cheap pizza. I won tickets. I bought prizes.

Then I put it all away and went to bed.