Despite buying it months ago (and saying I was really, I mean it, no for real this time, going to put some serious time into it on multiple occasions), I have only played about eight hours of Triangle Strategy. But, at least five of those hours were in the last week, so I'm gaining momentum.

I'm being reminded of what I knew since I started playing it this spring — it's a good video game that combines two things I enjoy in roughly equal measure: turn-based tactical RPG combat and Game of Thrones-style political maneuvering in a low fantasy setting. It's that political maneuvering that led to one of my favorite moments in the game so far.

As you play, Triangle Strategy frequently presents multiple choice questions to you. These aren't quizzing your knowledge; instead, they're testing who you think your character, Lord Serenoa, the heir to House Wolffort, really is. There are no wrong answers. But, each time you answer one of these questions, a text box will pop up to alert you that "Serenoa’s convictions have been strengthened.” You can't check your stats to see how Serenoa's personality is developing. Instead, he takes shape more like a real person; as the sum of your decisions without the helpful cheats provided by meters or graphs. I don't know how this will pay off 30-40 hours for now, but that's part of what I like — the opaqueness of the system to me as a player. 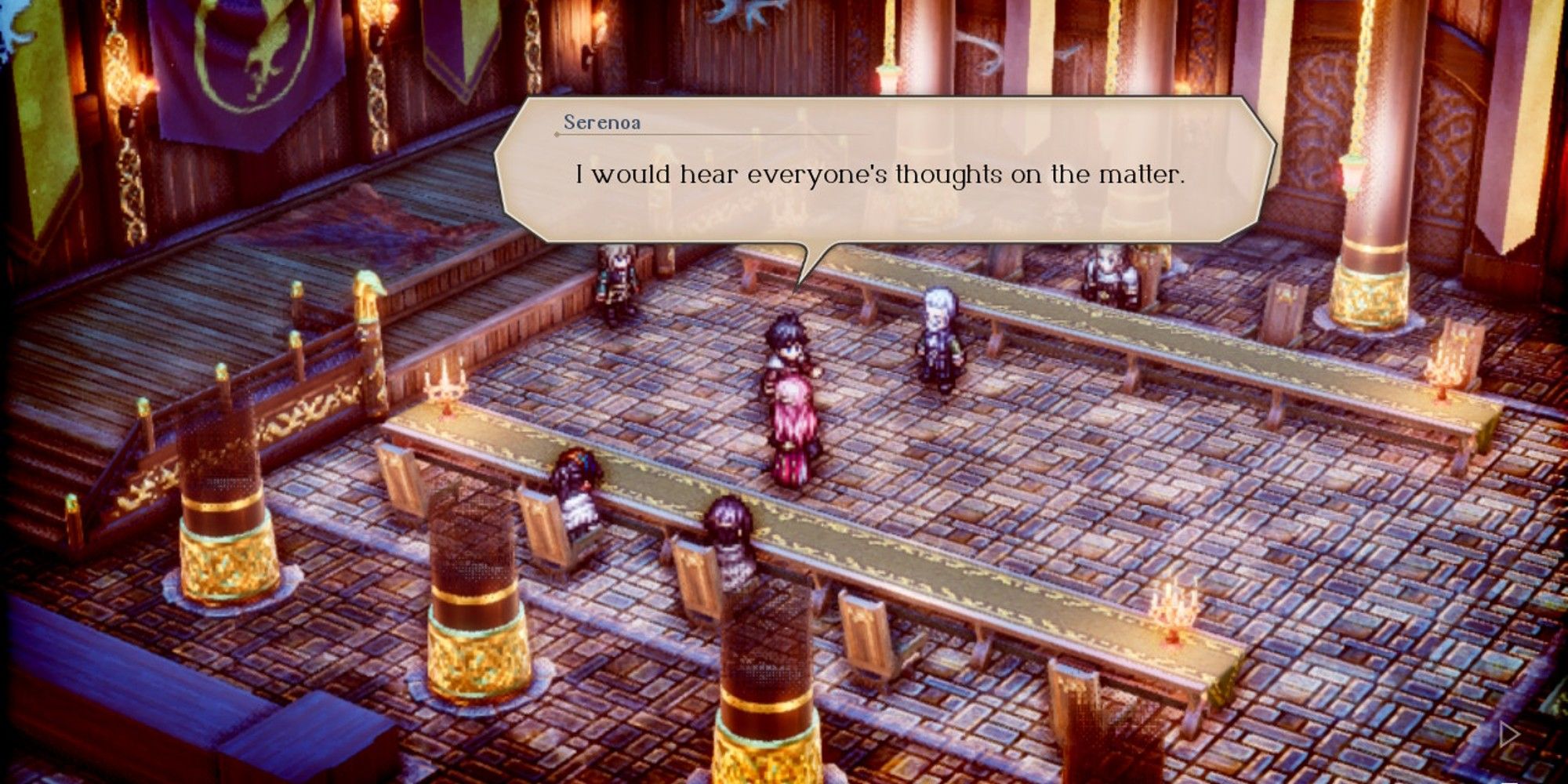 But Triangle Strategy suggests that its NPCs are, likewise, the sum of their choices and desires. About three hours in, my party ran into a decision point. Serenoa hails from Glenbrook, one of three countries in the continent of Norzelia, and to maintain a new alliance between the nations, Serenoa and his party are tasked by the king with escorting visitors from the two other countries, Hyzante and Aesfrost, home after a tournament. The king leaves the decision of which to visit up to you as a test. Neither choice is bad, but — as your advisor, Benedict, reminds you — your choice will have some effect on your national relationship with the other two.

Both have pros, starting with the aesthetic. Hyzante is arid and hot, while Aesfrost is cold and snowy. Depending on which you prefer, that may settle it for you right there. But, before you can leave on the trip, you need to bring it to a vote. You may have a preference, but your party members have desires, too. For example, Frederica, Serenoa's fiancée, is the Princess of Aesfrost, and would rather see more of the world than return to her home. Other members are strongly against going to Hyzante. Some don't care either way.

So, to settle the matter, you can try to reason with the dissenting members of your party. I wanted to go to Aesfrost for the winter vibes, but that put me at odds with Frederica. The game lets you know which of your party members may be open to changing their minds — "This one should listen to reason" — but when I spoke with Frederica, a prompt alerted me that "I'd have better luck talking to a stone wall." I tried anyway. In my attempt to convince her, I could give three reasons that I wanted to visit: 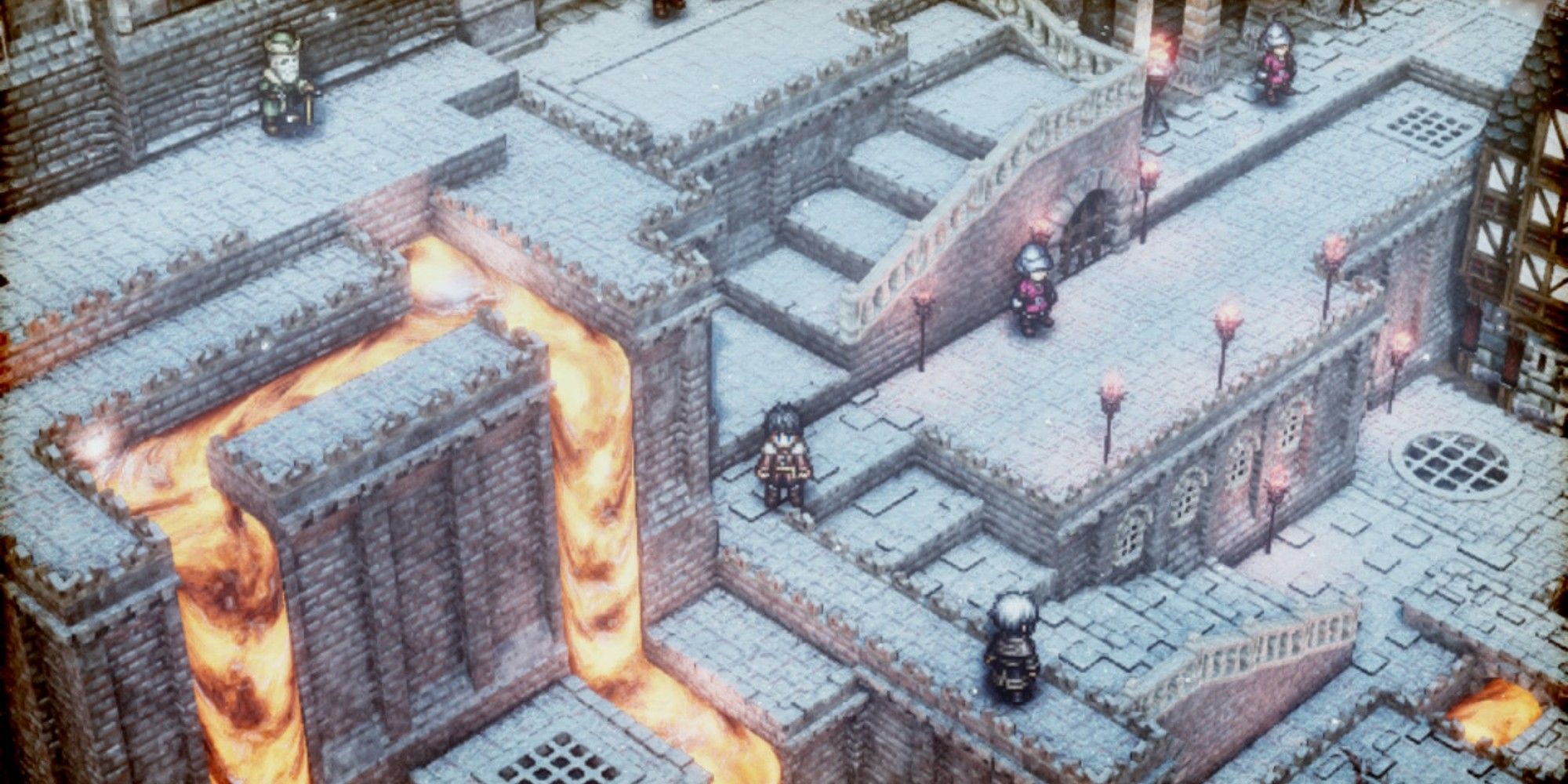 I chose the second, thinking that appealing to the importance of the relationship would have the best chance of winning Frederica over. But when it came time to cast our votes with each member of the party placing a coin on their chosen side of a scale, Frederica hadn't been convinced. "I'm so sorry, Serenoa, but I fear if I don't see Hyzante now, I will regret it."

Fortunately, enough party members were convinced that Aesfrost ended up winning the day. But, for a moment, I worried that I didn't have the votes. That's a rare feeling in choice-driven games. Even in narrative RPGs that I really love, like The Outer Worlds, the protagonist's decisions matter much more than anyone else's. If you choose to reroute power from a commune in the forest to provide juice to a nearby ultra-capitalist company town, that's ultimately up to you. Though a party member might dislike the decision, or intervene to try to reason with you, the choice is yours.

Triangle Strategy, by contrast, uses democracy as the framework for its decision-making. You can't unilaterally decide; you have to work for the votes. Playing this game is making me realize how frequently games position the player as a dictator who gets to shape the world to fit their whims. It's strange to play something where you're just another person.