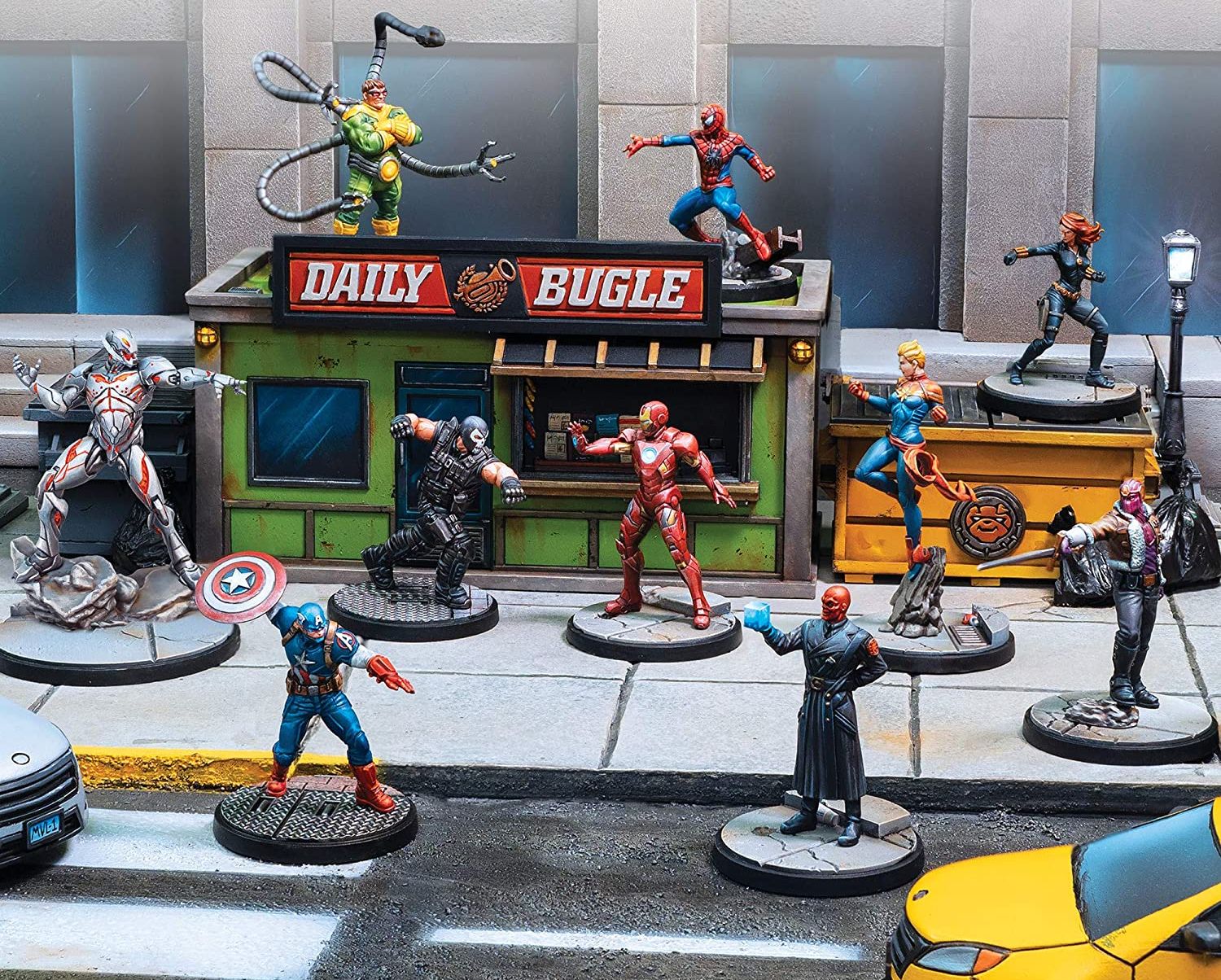 Superheroes aren’t limited to movies and video games, as GameCentral looks at some of the best tabletop games from Marvel, DC, and others.

Comic books are big business. Even though Marvel’s Eternals movie reviewed poorly it’s still been a major financial success, just like fellow 2021 flicks Shang-Chi and Black Widow. The upcoming Spider-Man: No Way Home is certain to do even better, which means that Marvel, and superhero movies in general, are going to continue to have a huge influence on pop culture for a long time to come.

Getting to the Forbidden Planet comic shop in London used to be like traversing Diagon Alley, to visit a tiny cupboard-sized shop halfway down Denmark Street. Back then, comics used to come in greasy plastic bags and with hefty price tags, but it was worth it to be able to read comic books in the tunnels of CERN, where I spent my childhood near the Large Hadron Collider (my dad is a particle physicist).

Naturally, I was desperately hoping all the subatomic radiation would give me superpowers but the closest I’ve ever got to being a superhero is scaring commuters on the bus with my Bane style Razer Zephr facemask. Well, that and playing games.

Nowadays, comic books are mainstream and Forbidden Planet has moved to much larger premises. Rather than only being appreciated by a small clique of nerds, the outlandish stories and characters have been recreated in some of the most popular movies and TV shows the world has ever seen.

Despite this success though superhero video games have been a largely hit and miss affair, with very few of any kind until relatively recently. Marvel’s Avengers was a surprise failure and while the recent Guardians Of The Galaxy game was much better the failure of its predecessor seems to have kept many away.

Once again, it’s Spider-Man that end up having to save the day but if you want to play superhero yourself then tabletop games have a much better track record of quality.

The Batman Miniature Game from Knight Models looks incredible even before you start playing with it, with the models capturing the look of various comic book iterations of the characters perfectly. The miniatures work purely as collectibles, but they’re supported by a rich set of rules and some good basic tabletop mechanics.

You control a team of characters, good or bad, as you move them around the streets of Gotham in an attempt to defeat other crews. The gameplay is a mixture of activating each character and playing cards from your custom-made objective deck to score victory points and use resources. The Batman team needs to send detectives trolling the streets and alleyways to flush out suspects and score some Snitch cards, while villains try to remain undetected and lay traps.

Marvel Crisis Protocol didn’t seem that interesting when it was first released, as it was a bit of a free-for-all at first, but now there’s a deep enough pool of miniatures to create some exciting teams it’s started to turn heads. It works in a similar way to the Batman Miniature Game, with each expansion pack adding at least two new characters and a vehicle or building, such as the Deadpool and Taco Truck set that also comes with joke character Bob, Agent of Hydra.

This has been one of the most eagerly anticipated releases of recent months, as it includes not just the two figures but a neat bit of background terrain for them to fight on. The simple gameplay system sees each model activate with two basic actions. Each miniature can then build up energy on your pull of special moves and powerful attacks. You then need to complete objectives and stop your opponent from completing theirs to win your game. Even the custom dice and wiggling measuring sticks are cool and show a lot of thought and effort have been put into the system.

Extremely popular as a live card game, each new pack adds extra heroes, player cards, and villains that provide a decent challenge and force players to work together. For those willing to invest, this means constant new content for a great co-op game. The deck construction is very straightforward, and all the characters feel distinctive, with a wide variety of different abilities and options.

You play against the game, which acts as the villain, and each human player picks a card which has a hero on one side and their alter ego on the other, such as Spider-Man and Peter Parker. There’s never one obvious route to success and so you really have to think about which side of the card to play and what strategy to take. Solid mechanics and interesting choices make this game a winner.

Magic: The Gathering also seems to have caught the superhero bug with Streets Of New Capenna due to arrive in 2022. New Capenna is a new plane of existence in the Magic universe and is set within a dark metropolis of grit and glamour, built by angels but now run by demon crime families. The concept art, showing characters looking like a cross between Thanos and Angel, have certainly sparked fan interest.

Role-playing stats are called Labels and are how the characters think of themselves, such as Saviour, Superior, Freak, Danger, and Mundane. These change as the characters’ perception of themselves is shaped by their decisions and interactions with others. With a heady mix of action and emotion, it does a brilliant job personifying the superhero genre using dice roll identity politics.

Taking on the role of one of your favourite heroes in a half-shell, or their friends, isn’t just an excuse to neck some pizza but a fun way to enjoy a miniatures role-playing game that won’t take all night to play. In Change Is Constant you battle your way through scenarios that retell the stories from the recent IDW comics and depending on the game mode missions generally take between 30 minutes to two hours.

You choose your campaign from the Adventure Comic included, which is a nice nostalgic touch. Each scenario includes the win conditions for the heroes and the villains, the number of figures that will be in the battle, and the map layout – which includes different terrain that can change what your heroes can see and how they can move around. This is a great co-op game worth buying just for the pizza dice and tokens.

Splendor is already a well-known card-based board game but what previously involved gem merchants during the Renaissance has now been adapted for the Marvel universe. As you’ve probably already guessed, the focus is now on the Infinity Gems, as you try and assemble a team of heroes to collect them all before Thanos gets to them.

Each turn you can either pick resources or recruit heroes to gain infinity points and bonuses. The more heroes you gather in your team, the more resources you’ve got available to pick-up higher-level cards. The game ends when a player manages to trigger the endgame and claims the Infinity Gauntlet. The artwork in Marvel Spelndor is gorgeous and it’s a surprisingly addictive game that can be learnt in five minutes and enjoyed for hours.

While it doesn’t introduce anything new in terms of mechanics this is a simple, fast-paced dice-driven co-op card game featuring the X-Men. Jump in the Blackbird to travel across the globe on death-defying missions to recruit new mutants, capture criminals, safeguard innocent lives, and play with a mix of veteran characters like Rogue, Wolverine, and Storm and newer heroes like Magik and Forge. With eight scenarios to choose from you’ll also bump into classic X-Men villains like Magneto, Dark Phoenix, and the Hellfire Club.

Gerard Way created something beautiful and intriguing in the Umbrella Academy comic and now’s these complex and compelling characters have found their way, via Kickstarter, to the tabletop. While not living up to its comic counterpart in terms of coherence, it’s a stunning looking game, where each player picks a family member to act as their hero card, then places a life card underneath it. Defeating the villains isn’t usually that hard but in the final battle they all come back to life and must be defeated a second time. That’ll make more sense if you’re a fan, but you’ll also find revised rules online to make playthroughs more comprehensible.