You are here:
Home / This Skyrim Mod Makes The Civil War Feel That Much More Epic

The Civil War is one of Skyrim's major events. Also referred to as the Stormcloak Rebellion by the Empire, the war sees the Stormcloaks fighting for their beliefs in traditional Nord customs and values against the Empire's Imperial Legion.

It's not all that simple of course, like any great war fictional or otherwise, with politics playing out, but it's one of those compelling storylines that makes Skyrim so gripping even today. But if players thought this great Civil War just wasn't epic enough, well there's a mod that adds to the epic-ness. The mod is question is called 'Skyrim At War Reborn'.

The mod comes courtesy of YoRHa Operator and has been a popular one since it was uploaded this month, making it onto top lists of downloads for Skyrim Special Edition. 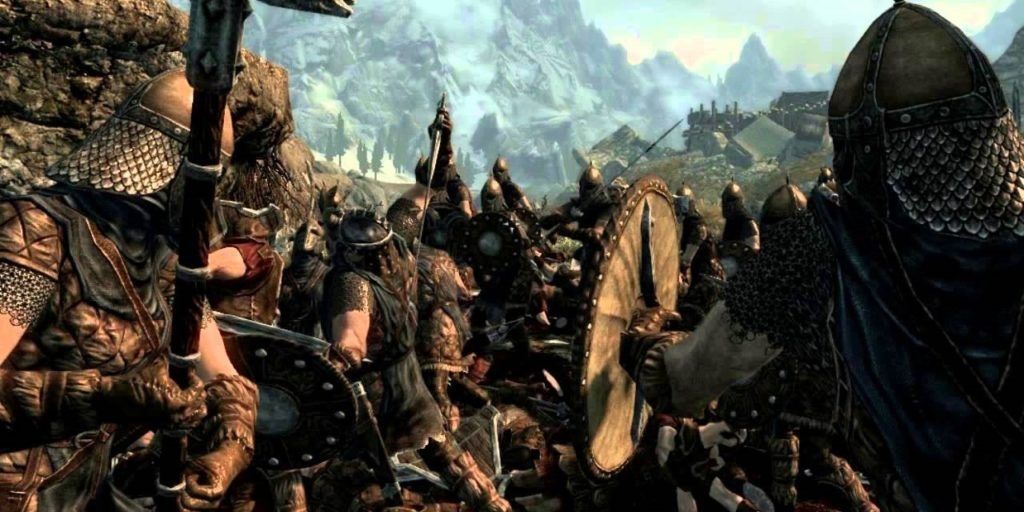 The Skyrim At War Reborn mod upgrades the Civil War by adding more than two thousand NPC soldiers that march throughout the world once installed. It also promises new Civil War units, "proper" marching and battle formations, tactical retreats, and even the ability for players to command a squadron of soldiers. Is this Total War Skyrim or what?

The mod implements an "immersive, large-scale dynamic war environment" and makes the Civil War "more fun, tactical, intense, and stressful than ever thought possible" according to YoRHa Operator. This is accomplished as more than 200 Civil War patrols are introduced throughout the main roads of Skyrim. These patrolling troops either defend their holding territories or attempt to conquer enemy holds, towns, or cities.

In addition, players can command groups of soldiers once you join a faction. As you climb the ranks you'll be able to lead more soldiers: from five all way up to 24. Battles will occur naturally from patrols crossing paths. The mod also adds new units to each Civil War faction, such as archers, heavy infantry, light infantry, officers, and battlemages.

This is a very well considered mod with a ton of features. Players can read the extensive description of the Skyrim At War Reborn mod over on its Nexus Mods page here.