You are here:
Home / The Witcher 3: The 9 Rarest Crafting Components & How Much They’re Worth

The Witcher 3: The 9 Rarest Crafting Components & How Much They’re Worth

Some crafting materials can be difficult to obtain in The Witcher 3, but certain components are rarer than others. A few of them are so rare that they’re flat out exclusive to a particular source.

We’ve excluded Flawless gems from this list, as they themselves are not used for crafting and must be broken down into the more readily available generic or dust forms to serve as crafting components. With that in mind, these are the rarest of the rare when it comes to crafting materials in The Witcher 3. 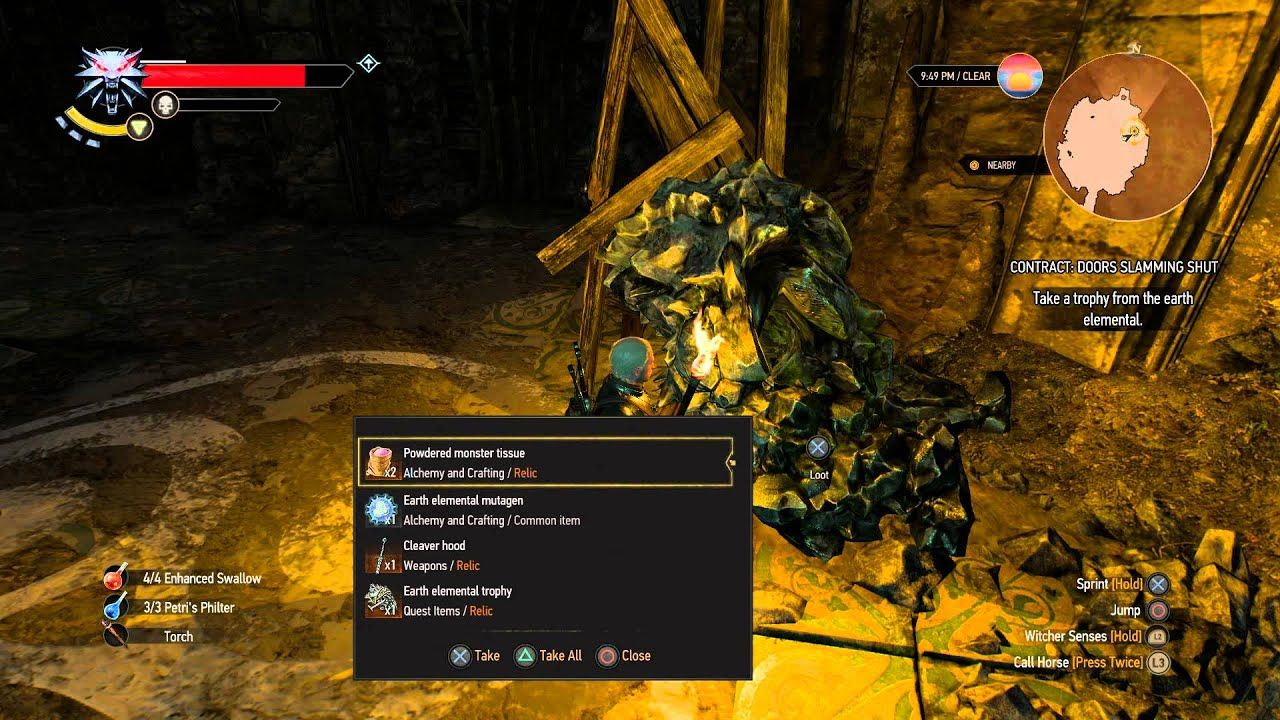 These bags of monster dust are attainable as drops from select monsters or by dismantling these particular items: Gargoyle Dust or Heart, Griffin Feathers, Shaelmaar Dust, and Specter Dust. The latter is the only pervasive component you can process into Powdered Monster Tissue, though Griffin Feathers aren’t a horribly rare drop. The Griffins they drop from are just more scarce than the various specters Geralt will encounter throughout his travels.

Powdered Monster Tissue is a key component in crafting the Lesser Veles Runestone, Infused Dust (another crafting component in several Glyph recipes),  the Faithful Friend steel sword, and Tah’Rel, a silver sword available in the Blood and Wine expansion. This dust is also used in crafting several different pieces of witcher gear.

The base worth of Powdered Monster Tissue is 15 crowns a bag with a sale rate of approximately 10 crowns. Of course, if Geralt wants to repurchase it, he’ll lose out because vendors will have inflated the price to about 66 crowns. 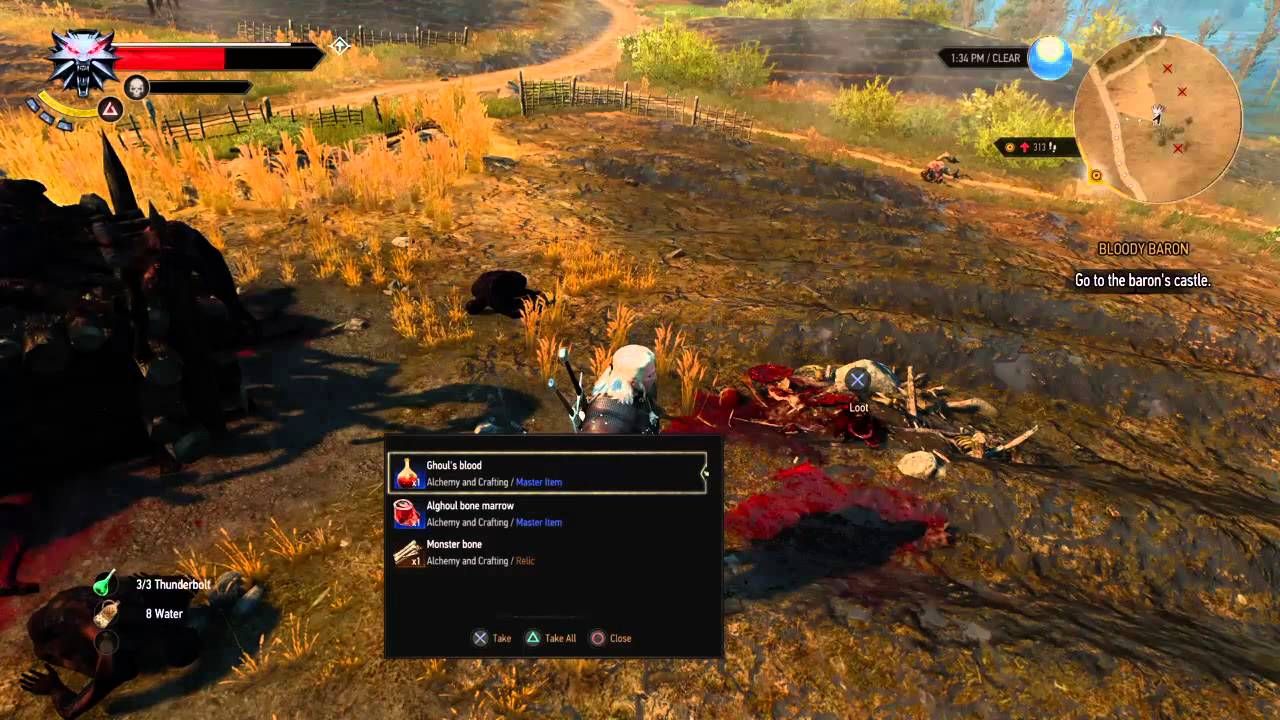 Monster Bones can also prove to be a rare find. Though Drowners sometimes drop them, the other monsters which yield them are more elusive encounters, such as Leshens, Wyverns, and Mourntarts. You can also obtain one by dismantling Alghoul Bone Marrow.

Monster Bone is used for crafting a long list of Superior, Mastercrafted, Legendary Mastercrafted, and Grandmaster witcher gear. It is also a component in the Beann’shie silver sword diagram.

Monster Bone is valued the same as Powdered Monster Tissue. That is a base of 15 crowns while selling at only around 10 crowns and an inflated 66 crown buyback rate. 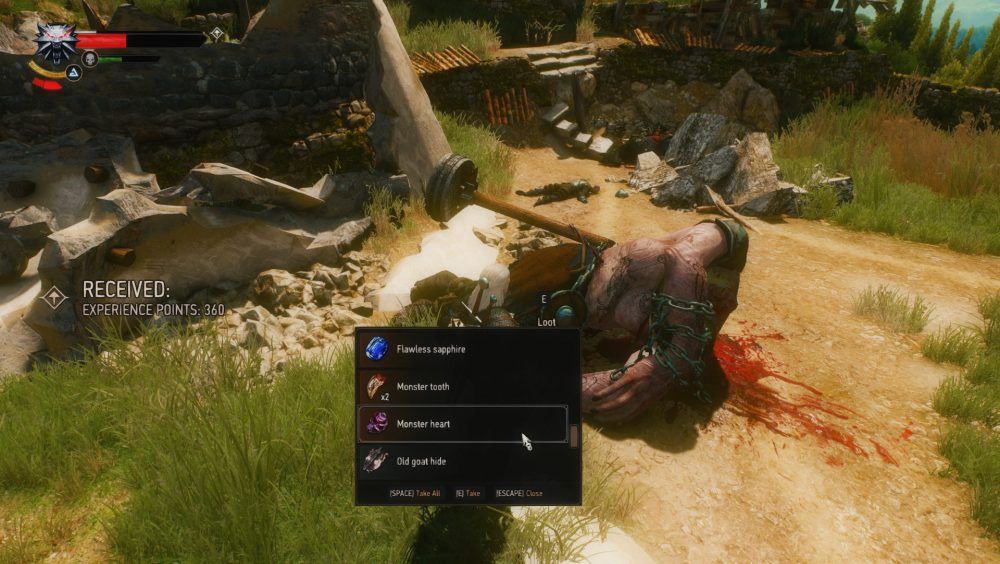 These chompers are a rare drop from particular monsters, but the more consistent way to obtain them is by dismantling Vampire Fangs, Foglet Teeth, or a Water Hag Tooth. These specific specimens can be rather uncommon drops themselves, which places a Monster Tooth among the game’s rarer Monster materials.

Like the previous Monster components on this list, a Monster Tooth is one of the requisite components in a variety of witcher gear. It will also fetch the same measly prices at market as Monster Bones and Powdered Monster Tissue. 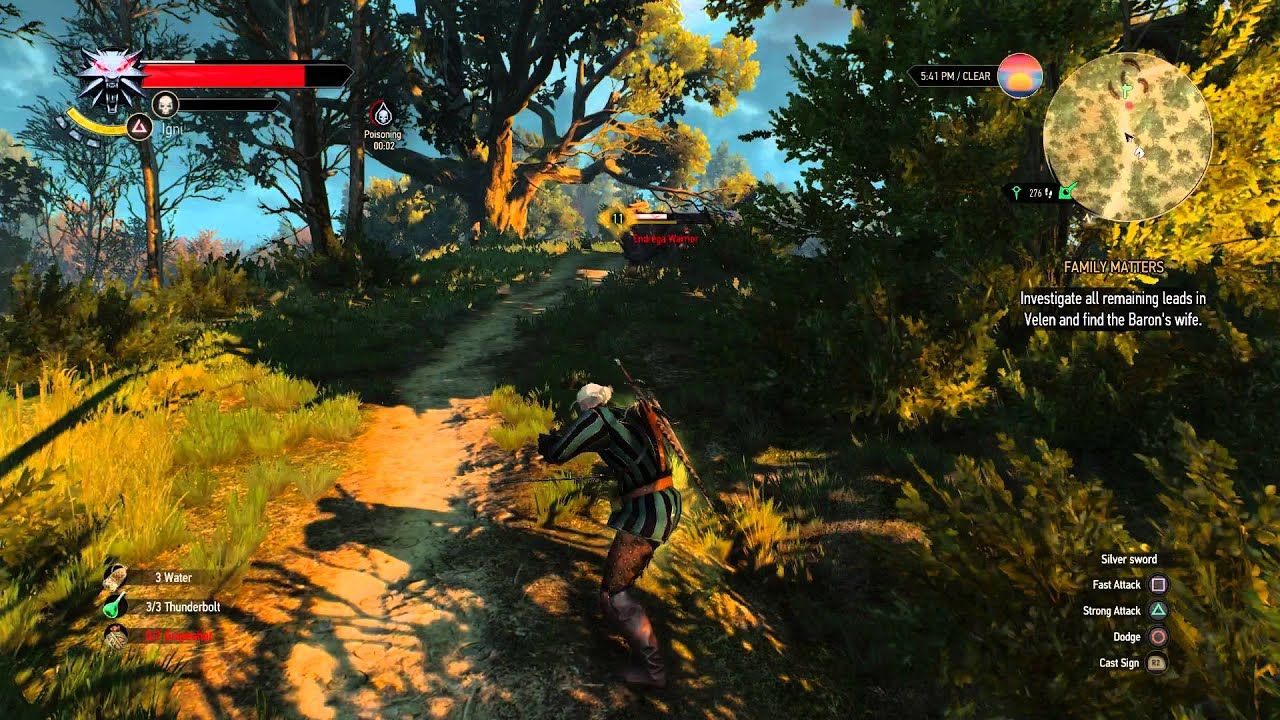 Exclusively available as loot from slain Endrega, Geralt can salvage these armored plates off the drones, warriors, and worker classes of the insectoids. However, this monster part isn’t in high demand with merchants.

Interestingly enough, the Endrega plates themselves are not used in any crafting diagrams but are instead broken down into generic Chitinous Shells needed to craft Cured Draconid Leather. These shells are more common as they can be processed from a variety of other more easily attainable monster parts.

With a base price of 60 crowns, Geralt will likely only fetch around 18 crowns for one at market. But take care that you don’t need it for any crafting before letting it go, because buying one back could cost around 113 crowns. 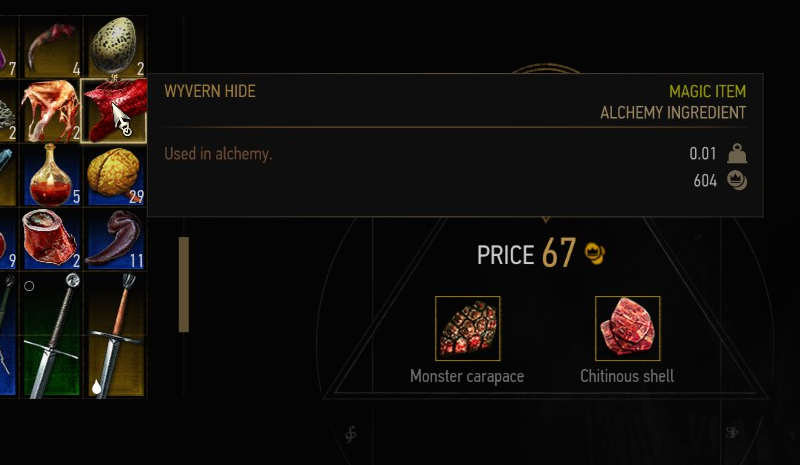 Getting more elusive now, Monster Carapaces can only be dismantled from Basilisk, Wyvern, and Forktail Hides, or Slyzard Scale Plates. All of these draconids are rather uncommon encounters, though adding all these sightings together, Geralt still stands a fighting chance at acquiring the necessary drops.

Carapaces are much more valuable than many other Monster parts, with a base value of 524 crowns. However, Geralt would be lucky to fetch about 378 crowns for a single Carapace, and he better be sure he doesn’t need it — because repurchasing one will run him 2,295 crowns. 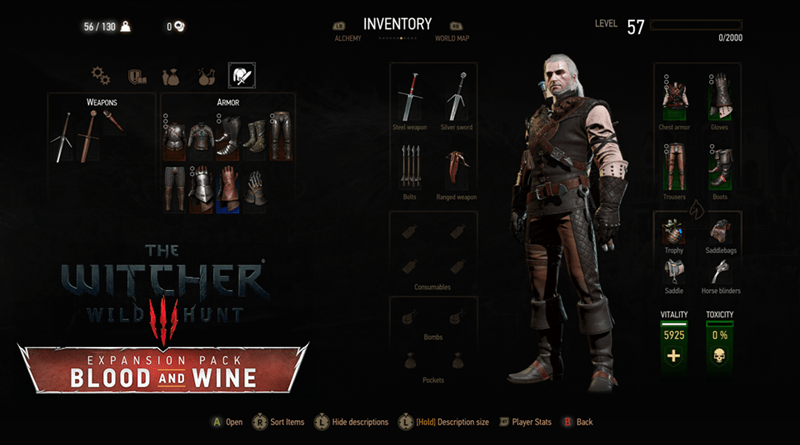 Ears are even more elusive, as they only obtained from dismantling Grave Hag or Wight Ears, though they’re not nearly as valuable. Luckily, they are only needed to craft the Manticore Armor from Blood and Wine. Ears are of the same value as Monster teeth, bones, and Powdered Tissue, which is unfortunate considering their increased rarity. 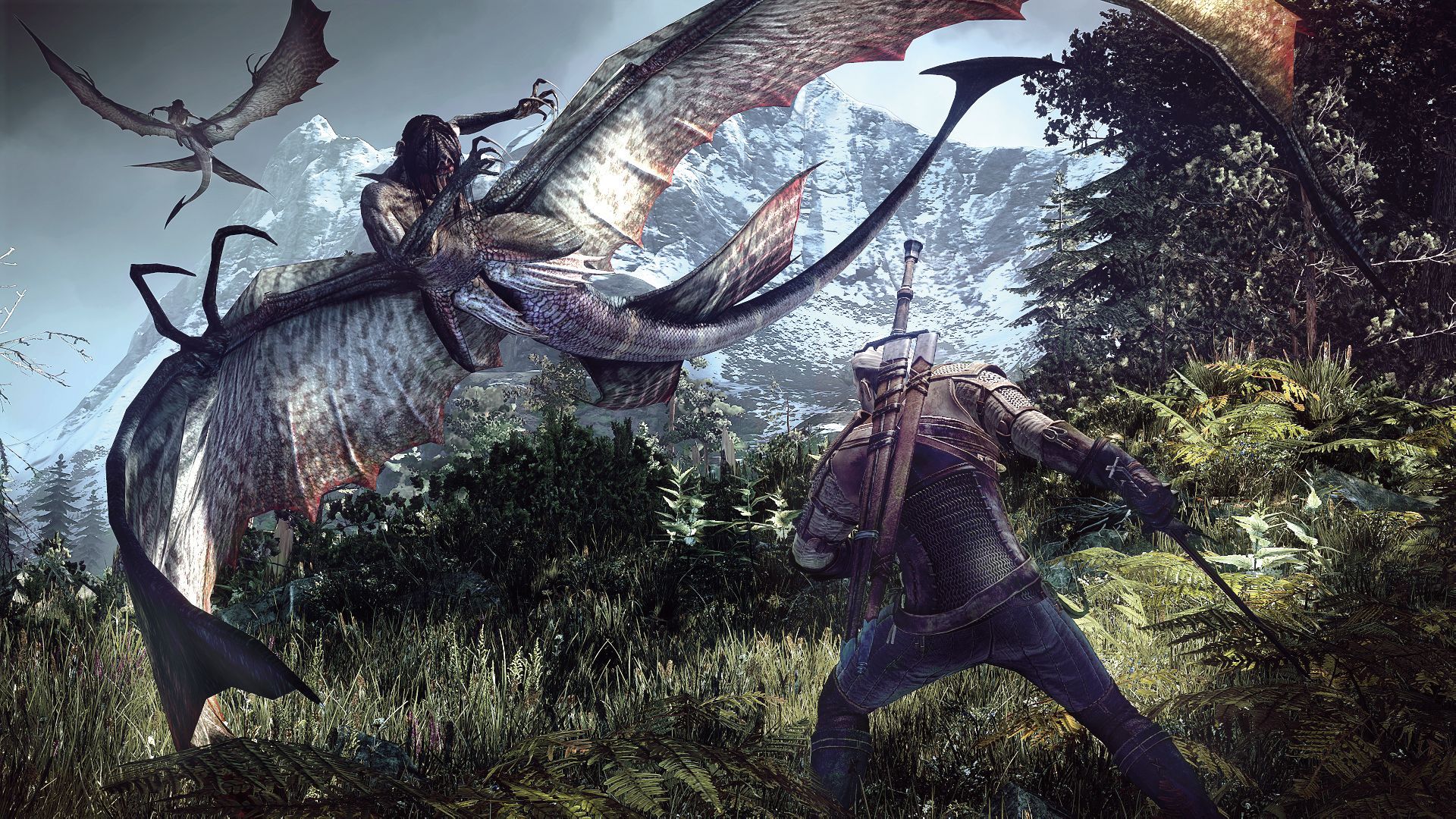 These vocal cords are about the same rarity level as the preceding material, though they will earn Geralt a prettier penny at market. This material is only available as a drop from Ekidnhas and Sirens.

Siren Vocal Chords are key components in the Mastercrafted and Legendary Mastercrafted diagrams for the Wolven and Griffin steel swords. With a base worth of 30 crowns, Geralt should aim to sell them for around 21 crowns and be prepared to repurchase them at a rate of about 137 crowns. 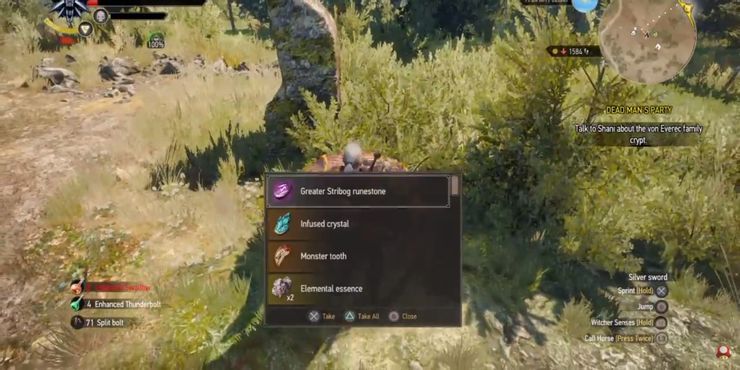 Infused Crystals are rare when looting in the vanilla game and a requirement for crafting Infused Slyzard Hide. They’re also an exceedingly rare drop from defeating the Ice Giant in Skellige. These oddities become a more common drop in Blood and Wine when seeking out hidden or guarded treasure troves. It’s possible to craft one by fusing two Infused Shards, which are a bit easier to come by, but still only drop from the more elusive encounters.

Geralt may come across one at market if he talks to a select few vendors, though he can count on them being quite costly. With a base value of 120 crowns, Geralt should expect to shell out closer to the 526 crown range if he resorts to buying one. At those rates, it’s hardly worth it to decide on selling any, as they’ll only rake in around an 86 crown payout. 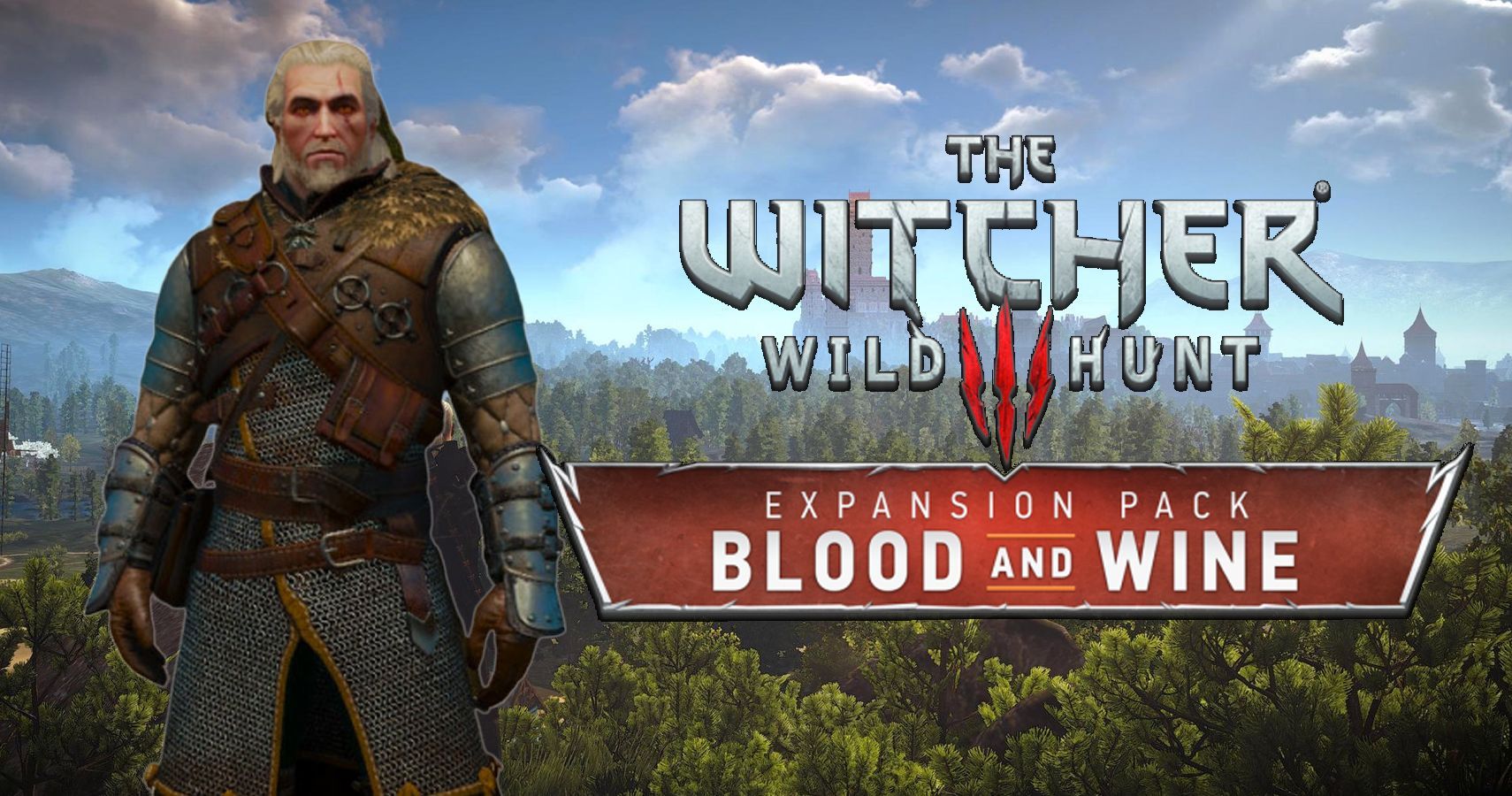 Infused Slyzard Hide stands out as the rarest of them all. It is only available through crafting exclusively in the Blood and Wine Expansion and requires rare components in and of itself.

The rarity of the material is only amplified by the amount Geralt will need of it. This infused hide is a requirement in every piece of Grandmaster and Grandmaster Legendary witcher armor except for the Viper school set. So if you’re a completionist looking to round out your witcher gear collection, be prepared for a long grind to craft all that pristine hide.

With a base value of 300 crowns, Infused Slyzard Hide usually only sells for around 129 crowns. If you were to repurchase it, however, the inflation costs Geralt a whopping 782 crowns.

The rarest materials in The Witcher 3 are mostly used in crafting elite witcher gear. So if you prefer an alternative set such as the Tesham Mutna ensemble or other perfectly viable gear, then you don’t have to worry too much about stocking up on crafting supplies. However, witcher gear such as the Ursine, Griffin, and Feline sets are widely considered some of the best gear in the game, meaning you may have a long grind ahead of you if you haven’t been squirreling away these select components.

NEXT: The Witcher 3: How To Defeat Dettlaff 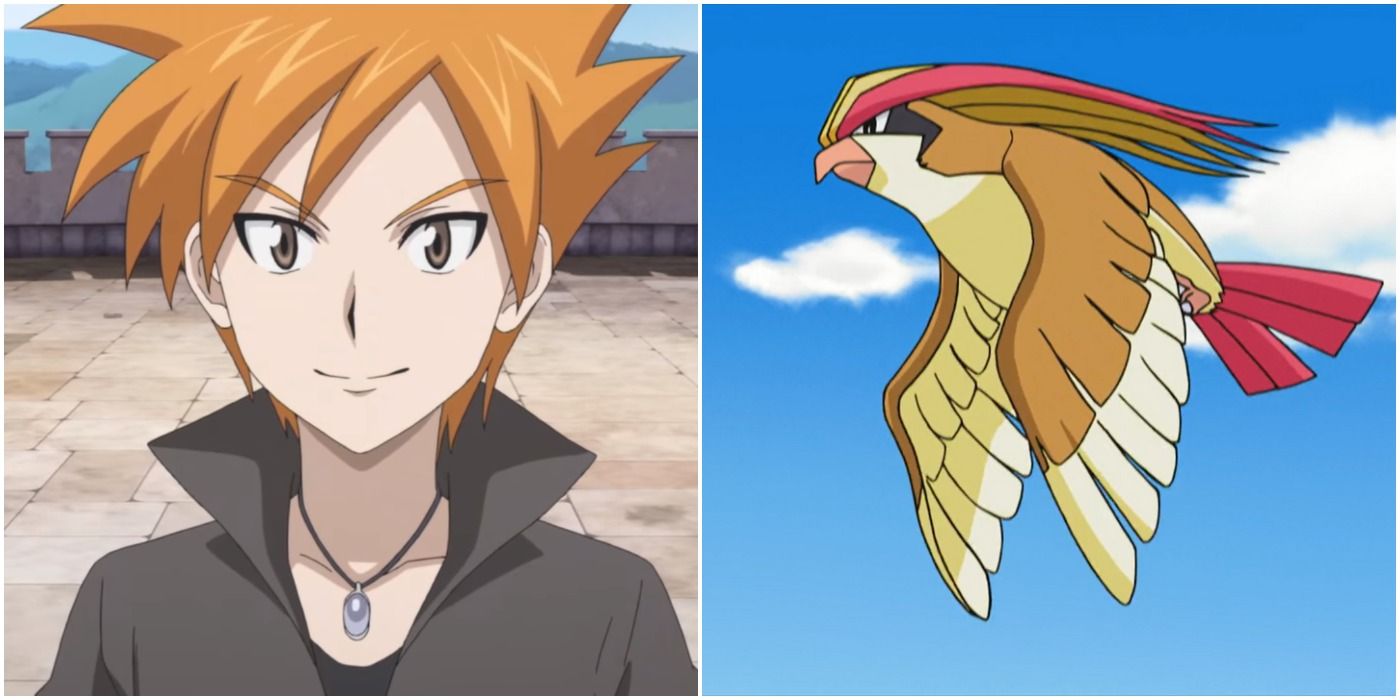