You are here:
Home / The Quarry: 10 Choices You Think Matter But Don’t

The Quarry: 10 Choices You Think Matter But Don’t

Supermassive games like The Quarry make you question every little thing you do. Almost everything in the game can lead to something no matter how big or small. Every choice has consequences, making it even harder when you see the options come up on your screen.

Plenty of moments that seem small and insignificant in The Quarry end up having huge repercussions. Simply picking up an object early in the game or choosing how you speak to someone can sometimes mean life or death. But alongside these big consequences are small ones as well. Here are ten choices you can make in The Quarry that you think matter, but ultimately don’t.

Major plot and gameplay spoilers are ahead. 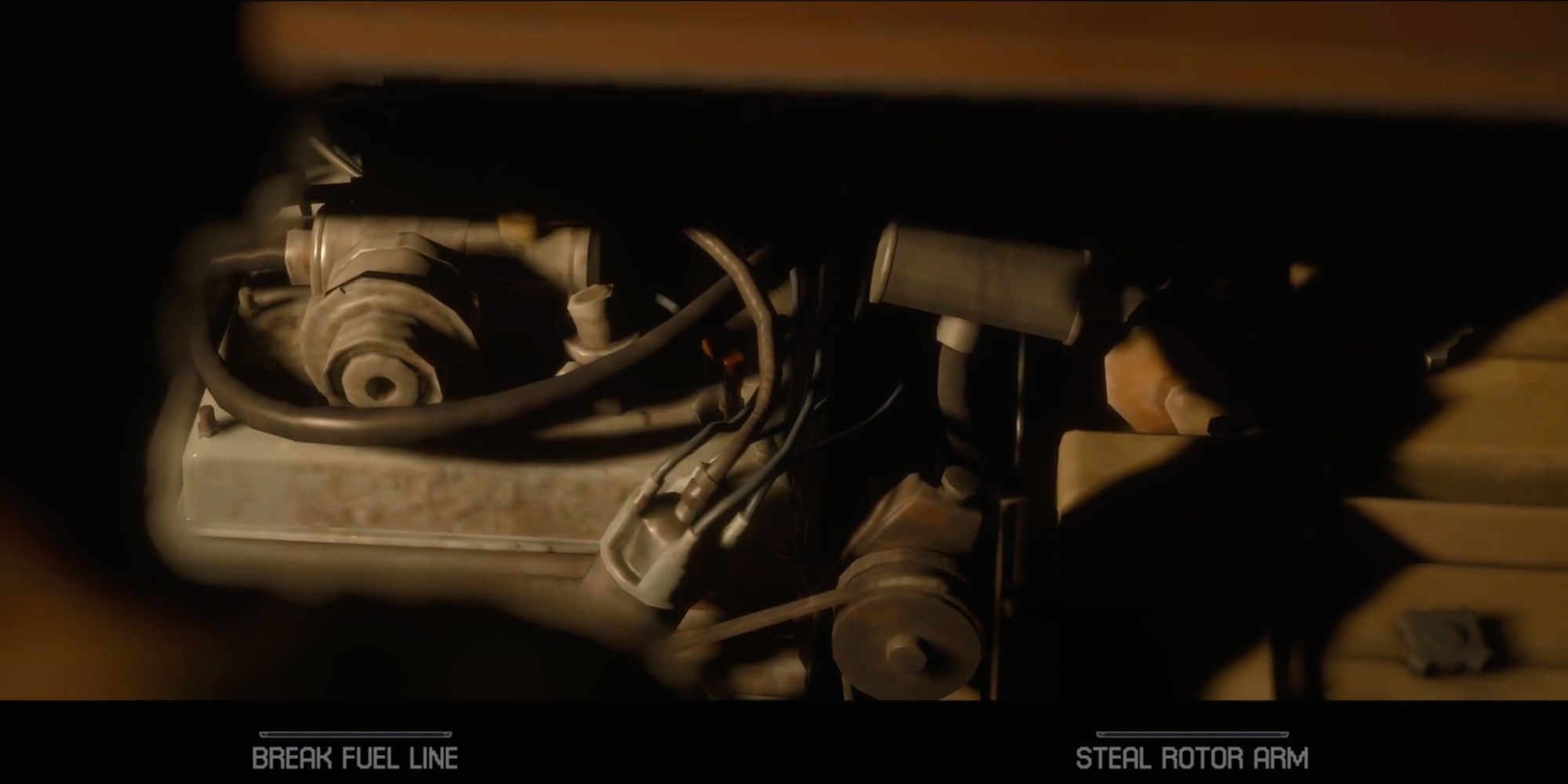 Regardless of if you break the fuel line or steal the rotor arm, the van isn’t getting fixed. The rotor arm will inevitably fall out of Jacob’s pocket when jumping in the lake. If you choose not to dive after it, you’ll lose it forever. But if you do dive in, you can find the body of one of the missing hikers.

Despite counting toward collectible evidence, this might seem like a big deal, but it really has no significant or long-term effect on the plot. The only potential risk is that Jacob can drown while diving, but it’s easily preventable.

9 Dive In Or Help Abi 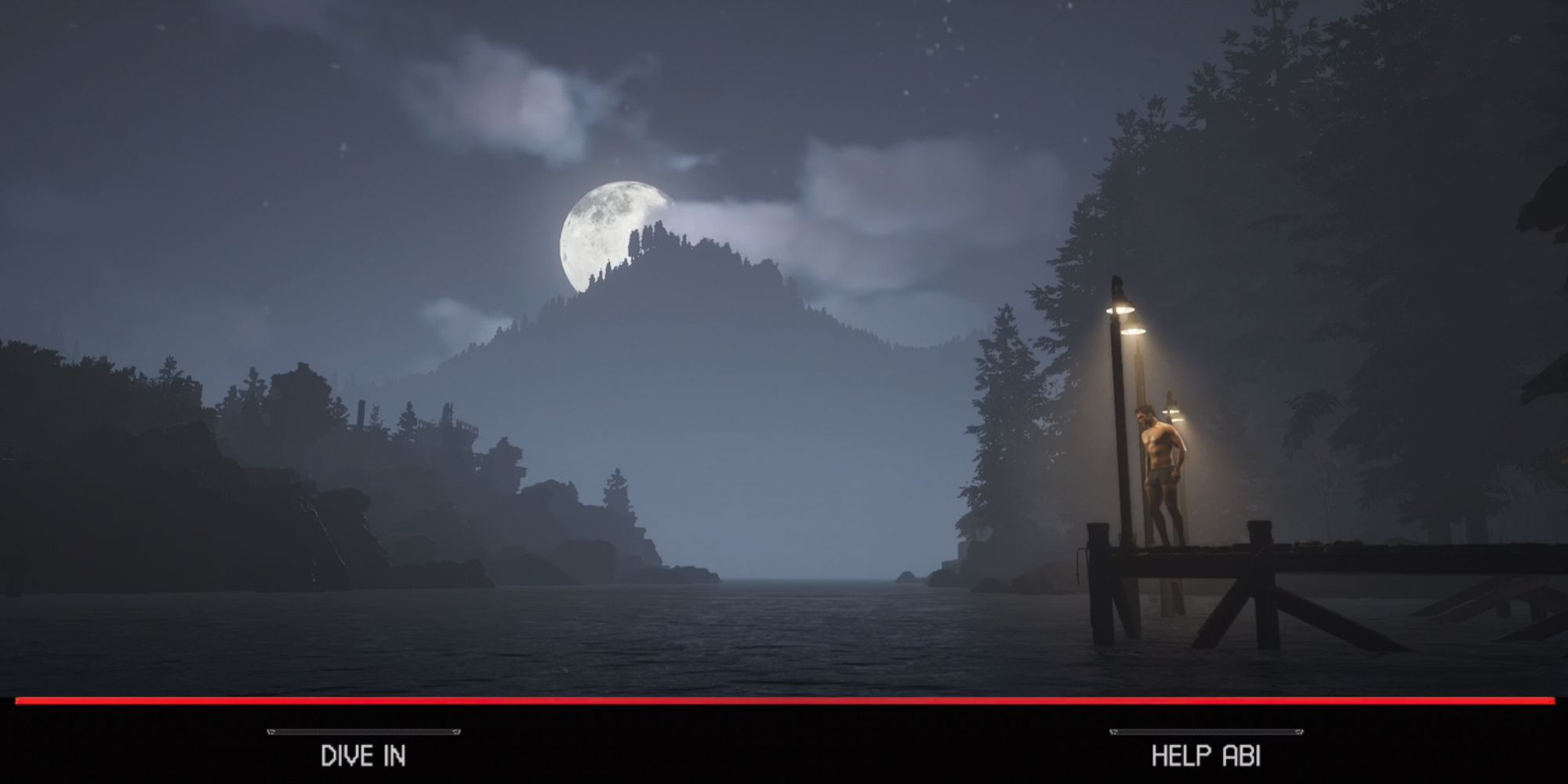 The choice to dive in after the rotor arm has an alternative. You’ll hear Abigail scream and the sound of a gun going off. Jacob can either choose to help Abi, leaving Emma behind, or he can dive back into the lake for the rotor arm.

If you choose to help Abi, Jacob doesn’t end up finding her until she’s already back with the group. If you choose to dive in, Emma will swim away assuming you abandoned her. This choice won’t change either Abi or Emma’s paths.

8 Leave Or Stay With Max 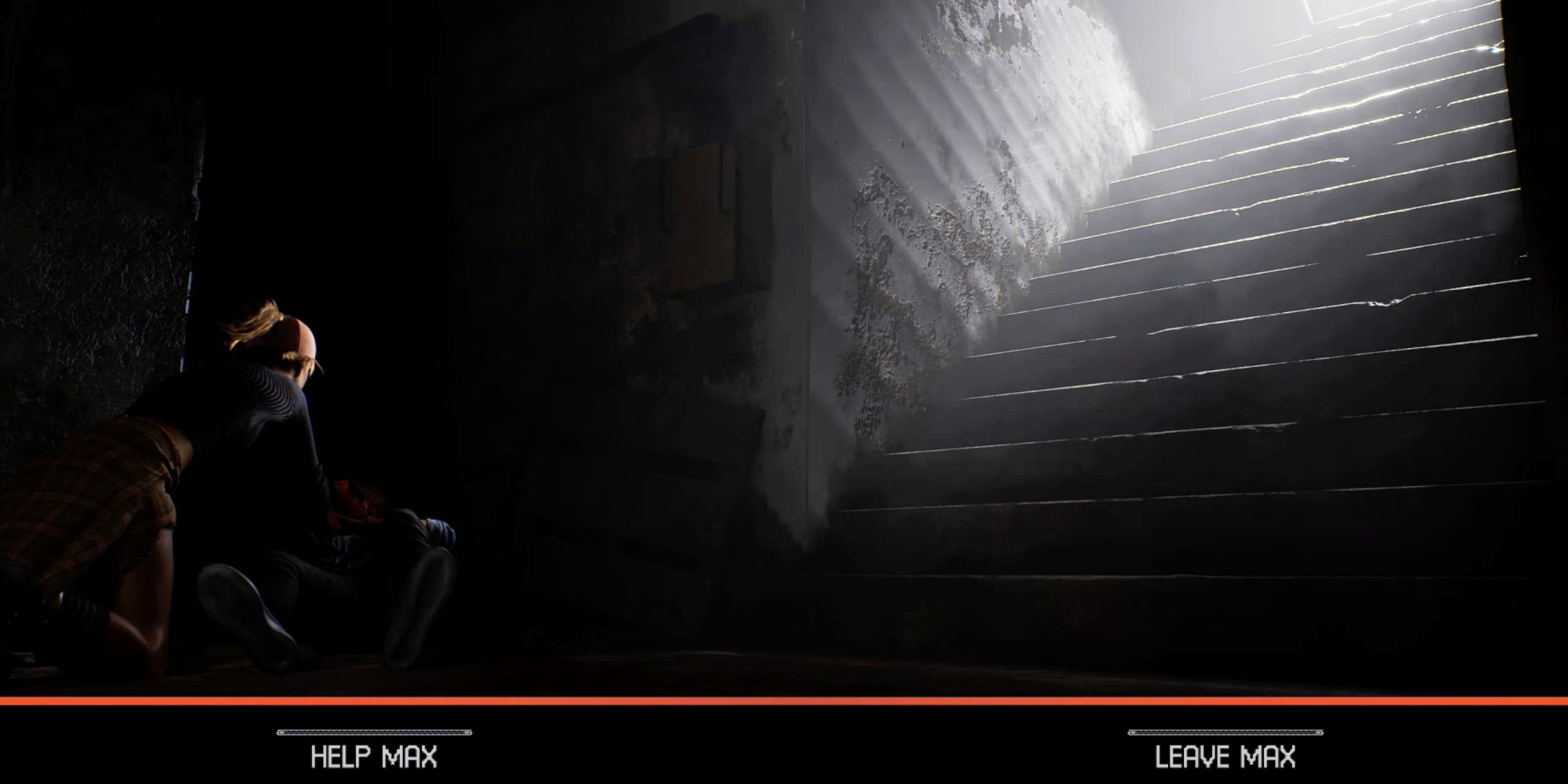 In the prologue, Max is brutally attacked by an unidentified creature. Max is bleeding out and the creature is still with you in the storm shelter.

Playing Laura, you can choose to leave him or try to save him. You might think this choice will determine if Max lives or dies, but he survives regardless of your decision. Laura also makes her way up the stairs and is tranquilized either way. Some hurt feelings are the only consequence of leaving him. 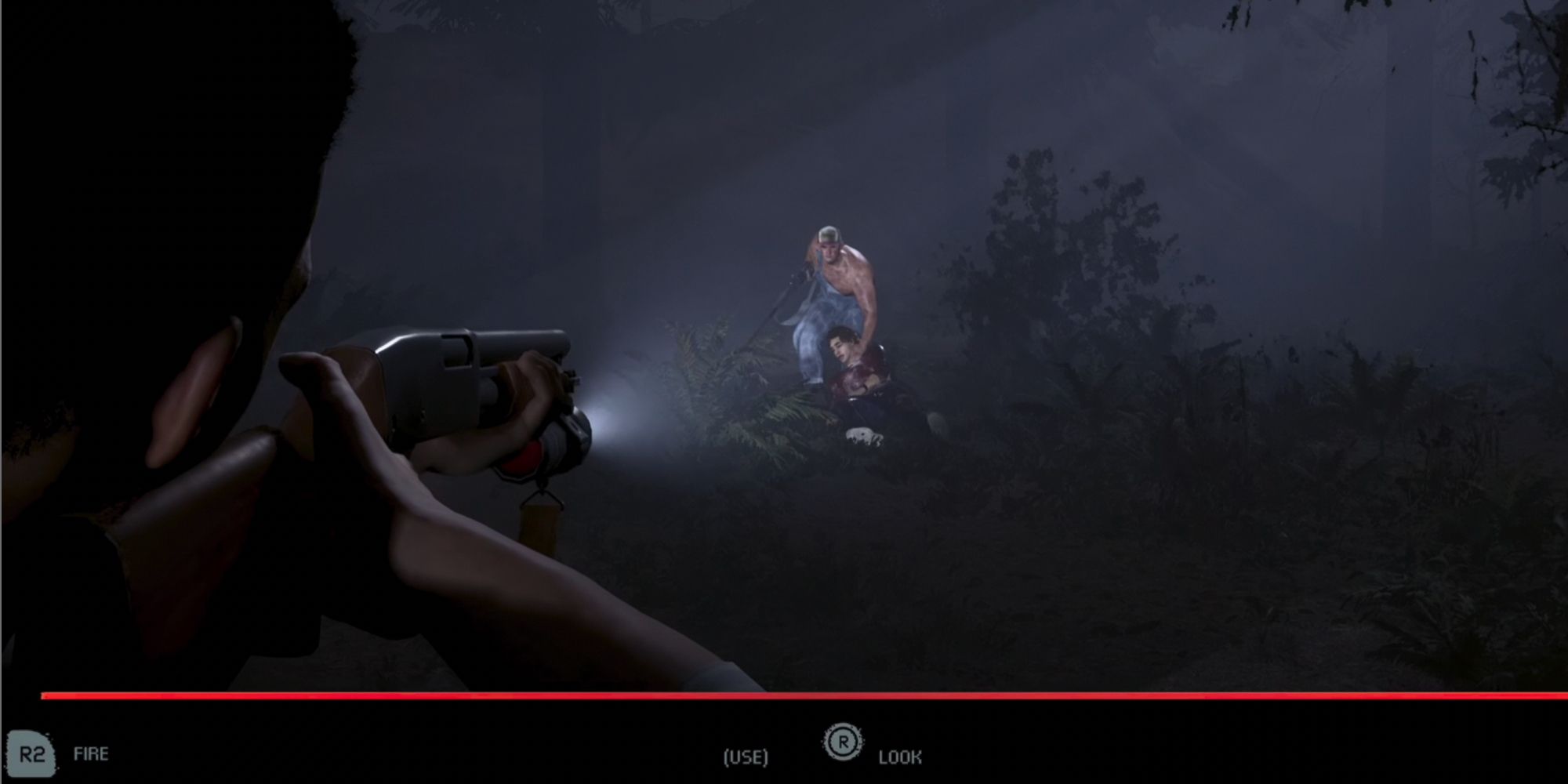 Running into Bobby while he drags Nick off is a tense moment. You automatically assume the worst, so when you see Nick injured and being pulled away, you'll have to decide whether you want to shoot or do nothing.

If you do shoot Bobby, he’ll be totally fine. He may leave the scene with one less finger, but the damage is self-inflicted. Shooting him will cause him to drop a vial of werewolf blood, which can prevent a future attack, but you can still save everyone without it. 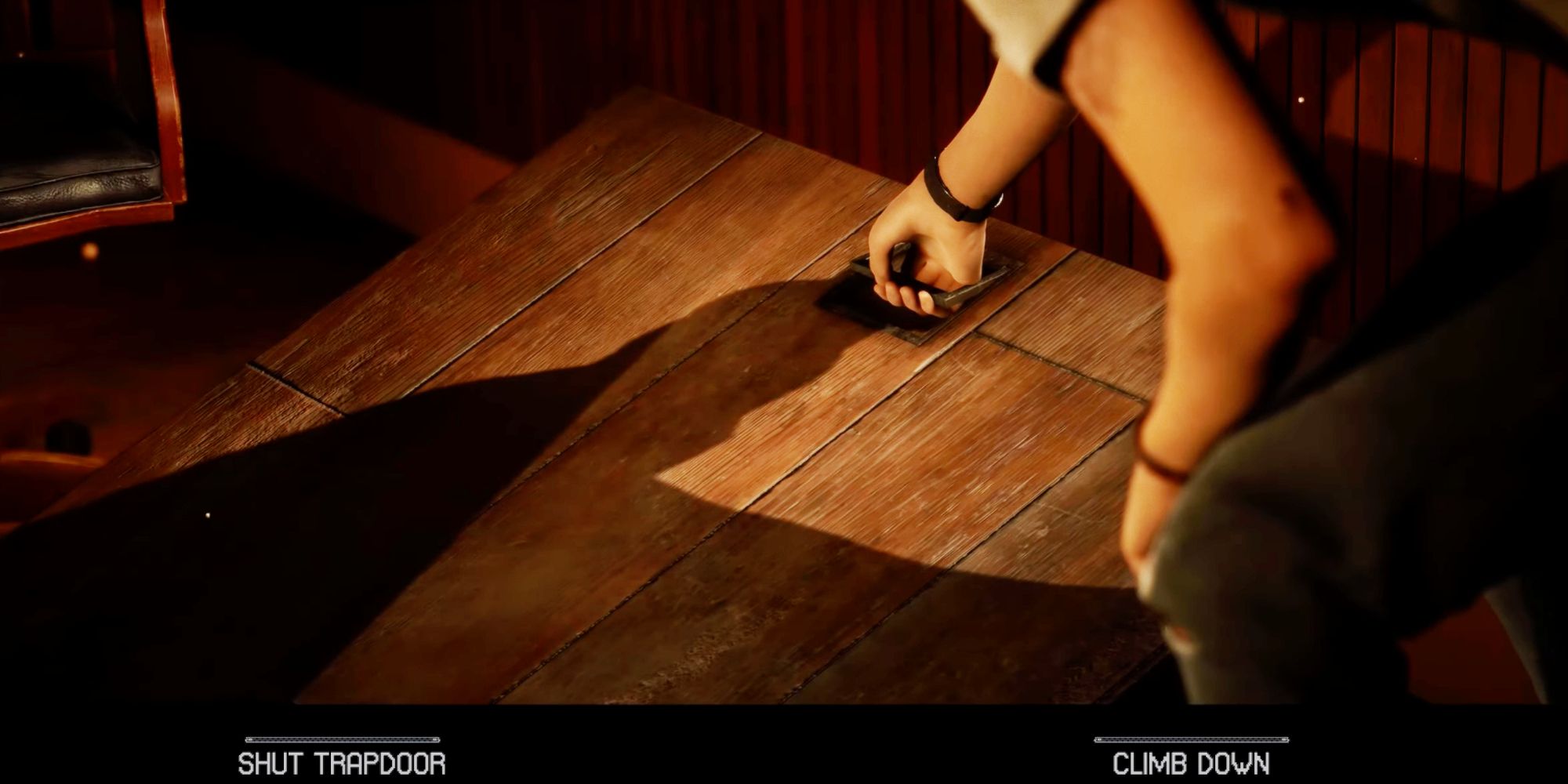 While snooping in Chris Hackett’s office, Dylan will find a trap door behind his desk. You can choose to investigate and climb down the ladder, but nothing happens to Dylan either way.

While he’s climbing back up, a rung will become loose, which will later impact Abi. If you’re stuck in the storm shelter with a transformed Emma, you can escape her attack by climbing up the ladder. Stepping on the rung will slow Abi down momentarily, but she can still make it out unharmed. 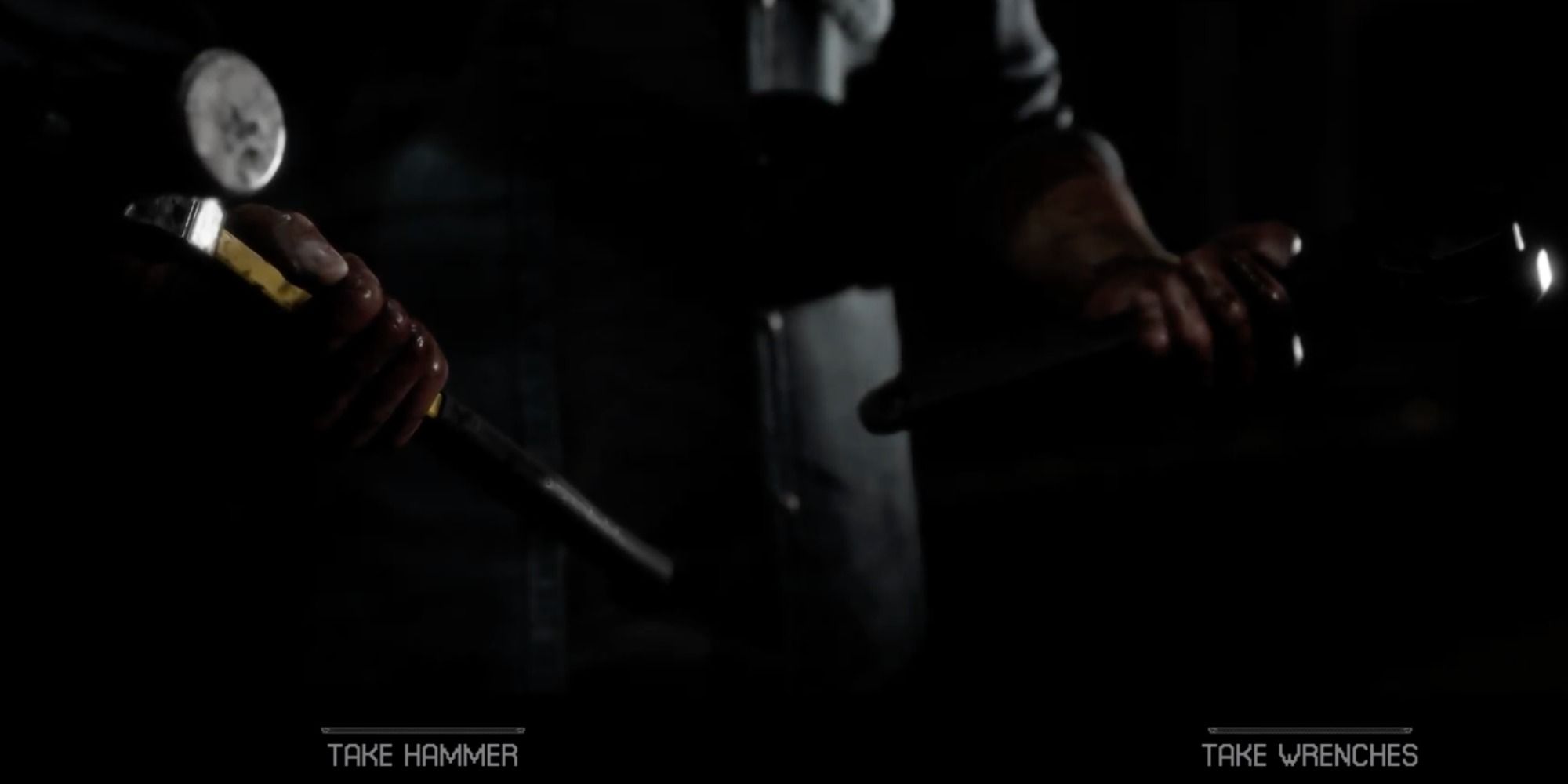 This is one of the first choices you need to make in The Quarry. Laura is faced with it in the prologue when she sees something behind the storm shelter doors. When Max presents you with the choice, you might think that it’ll make a difference, but it really doesn’t.

The hammer will be a bit louder when opening the doors, but it doesn’t change or hasten any of the events to come. Max’s attack is inevitable and can’t be prevented no matter which tools you choose.

4 Run Away Or Help Nick 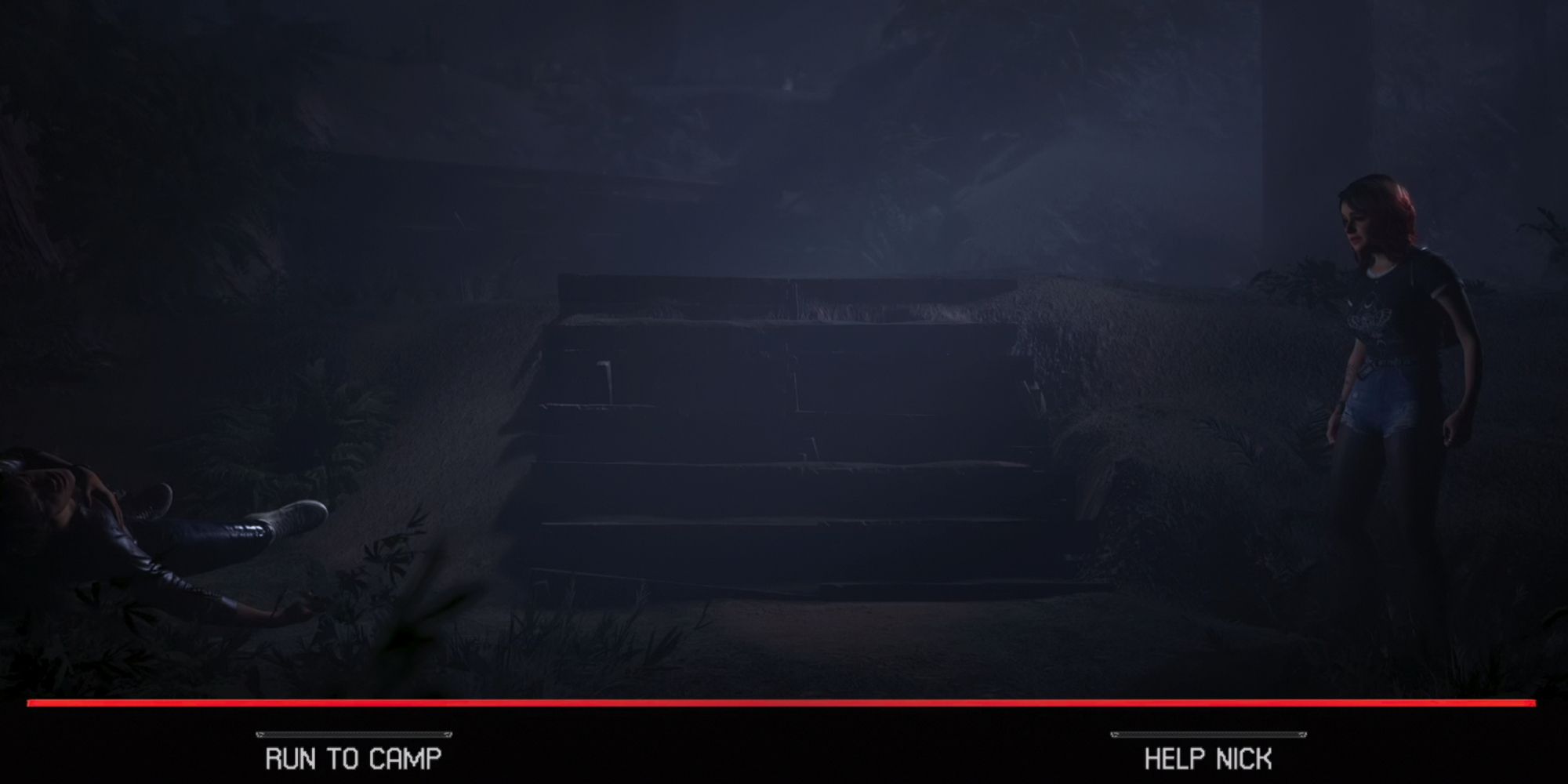 Similar to Laura’s choice with Max, Abigail will have to choose to stay with Nick or abandon him. No matter what you choose the same events will happen.

If you choose to stay, Abigail will run away once the werewolf returns, and if you choose to leave, she just runs off. Nick survives the encounter and becomes infected either way.

If you choose to abandon Nick, he’ll feel betrayed, but by the time you discuss it with him, the infection has already drastically changed his personality.

3 Take The High Road Or Stay On The Path 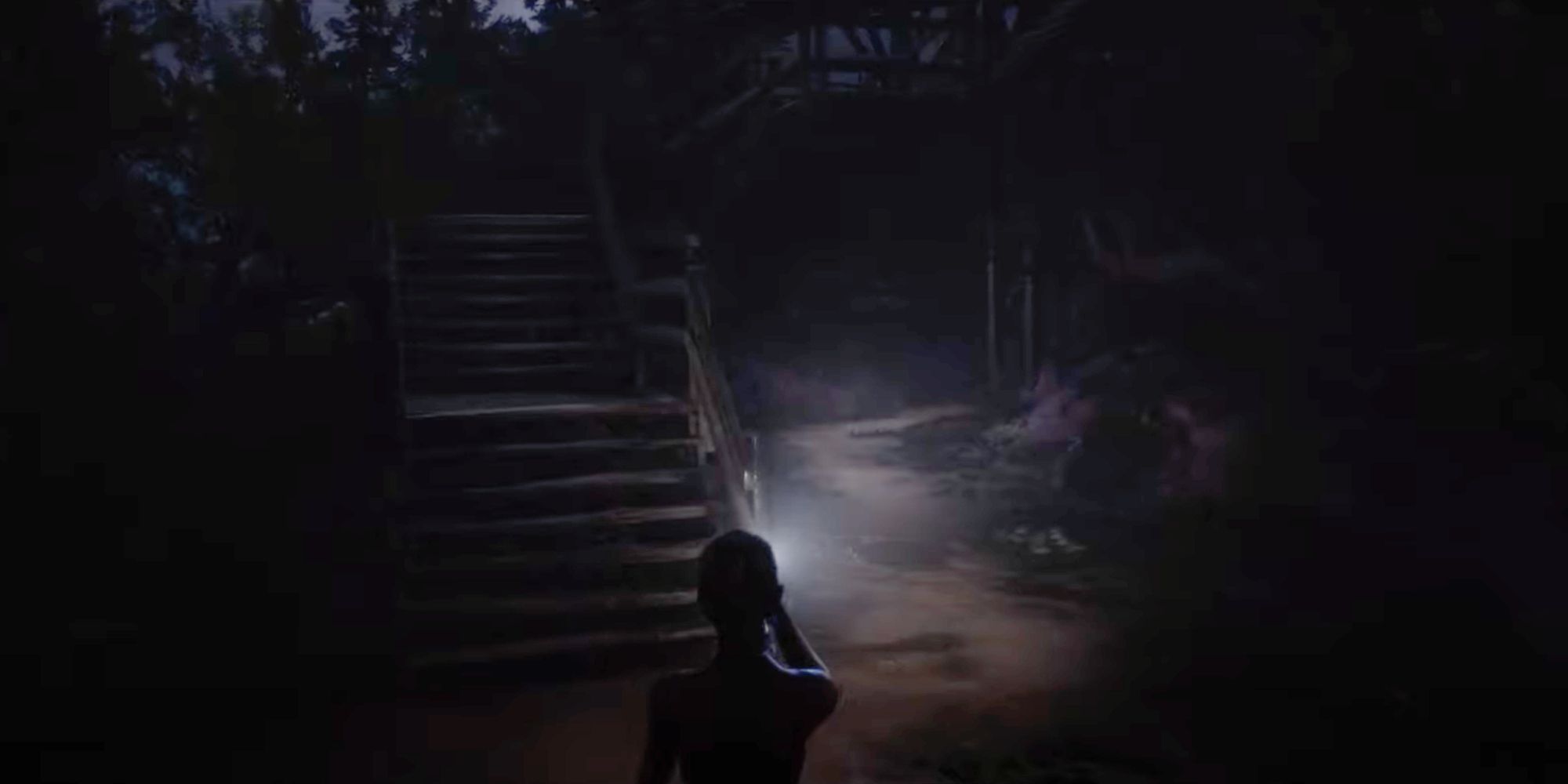 After swimming to the island, Emma starts vlogging and talking about Jacob. While venting, she encounters a literal and metaphorical fork in the road. The “high road” takes Emma up the stairs to the treehouse, and her current path leads her to some collectibles. The path you take will give Emma a different perspective on their relationship.

No matter what path you choose, Emma will eventually make her way up the stairs to the treehouse, and she’ll have to encounter Max as a werewolf either way. 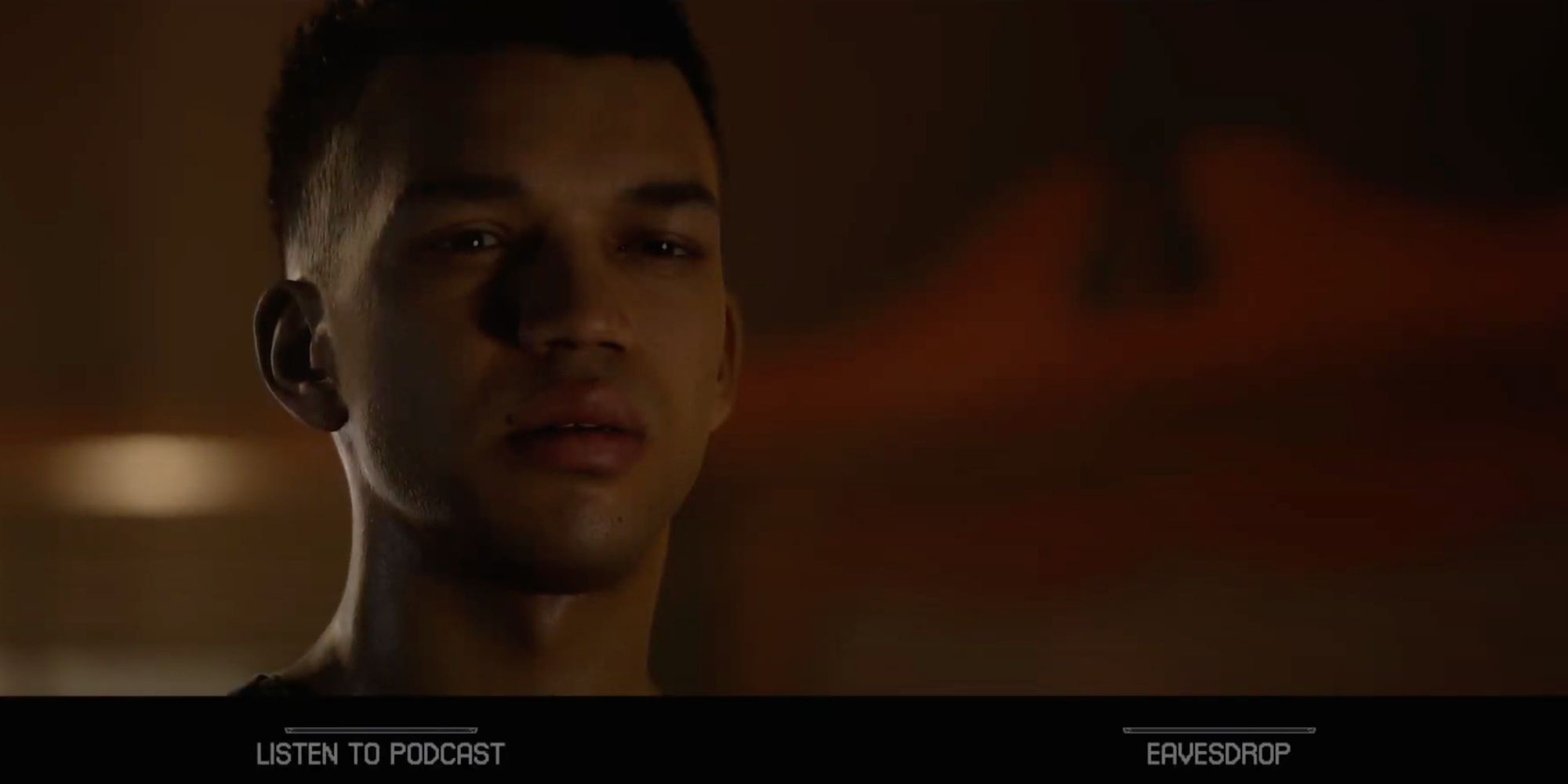 If you’ve played Until Dawn, you’re likely conditioned to choose your dialogue very carefully. In The Quarry, your interactions with most of the characters won’t impact your game.

For example, none of your interactions with Chris Hackett will affect your relationship with him or the plot. Although he plays a large role in the story, you only interact with him in human form in the first chapter. Choosing to be defiant or friendly as Dylan or Ryan won’t change any future events involving him. 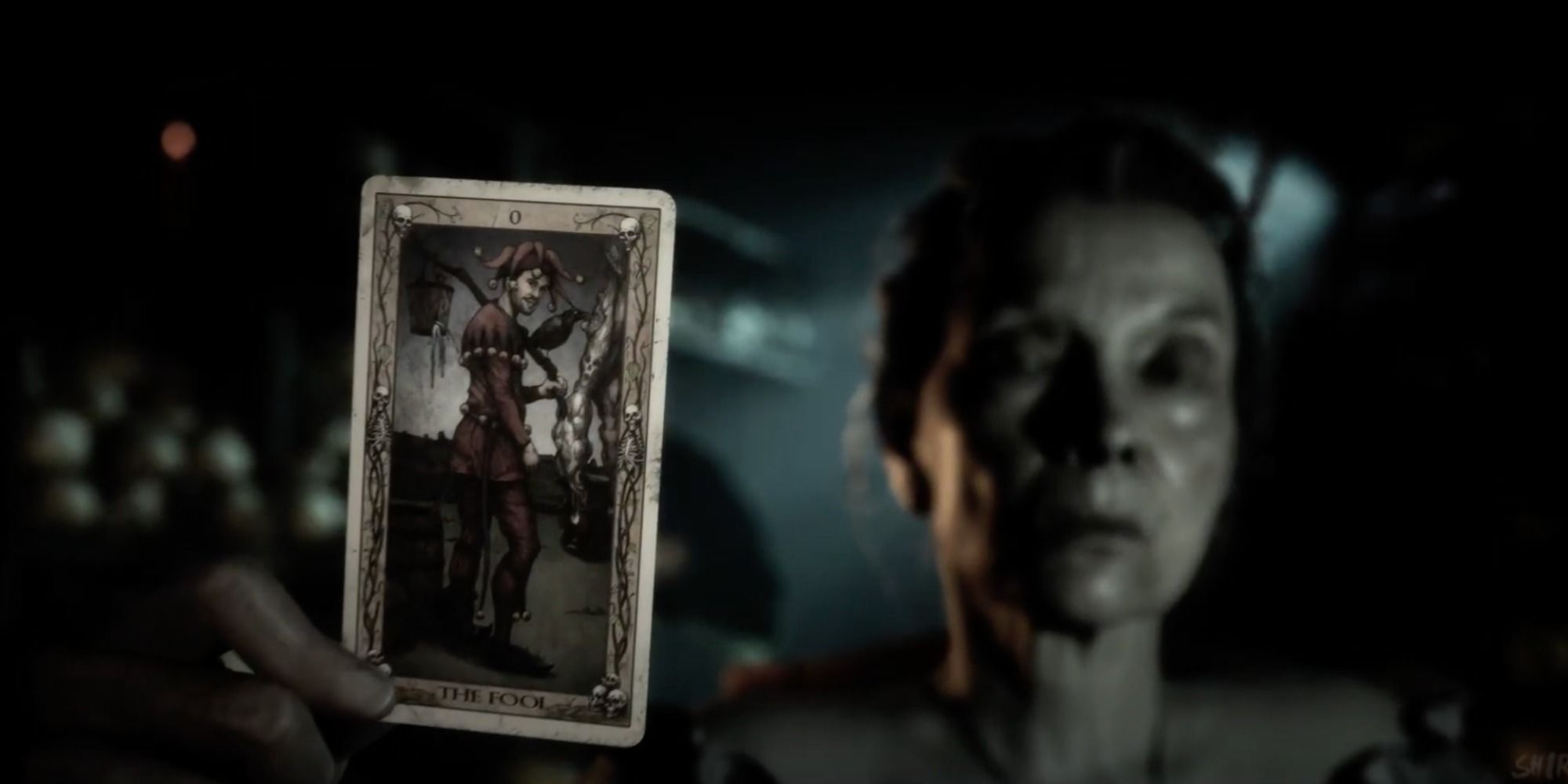 When you meet with Eliza and show up with no cards, you might think you’re missing out or negatively impacting your game. But really, the Hierophant is the only tarot card that will add to your story. All other cards are like finding totems in Until Dawn, except much more limited. If you happen to collect four cards in one chapter, you’ll only be able to see the future in one of them, so there’s really no need to stress about missing cards.