You are here:
Home / The Most Useful Tools In Embr

The Most Useful Tools In Embr

Embr is a game all about fighting fires, and as a result, you'd expect to have the right tools for the job. Whether it's breaching a room, carrying a civilian to safety, or putting out a raging fire, you'll need the best gear available to help. Embr's plethora of handy equipment is sure to see you through, but knowing which to invest in first is the trick to staying alive while everything else burns around you.

From Fire Axes to Grappling Hooks, the tools in Embr range from the reasonable to the downright bizarre. With each one costing a small fortune, it's important to know what to prioritise, especially as they all come with an assortment of upgrades as well. Fortunately, Embr's customisation never feels overwhelming and is one of the many wonderful things that make it one of the best co-op games on Xbox Game Pass. While you can absolutely pick and choose the right tool for you, there are a handful of tools that are simply the best. 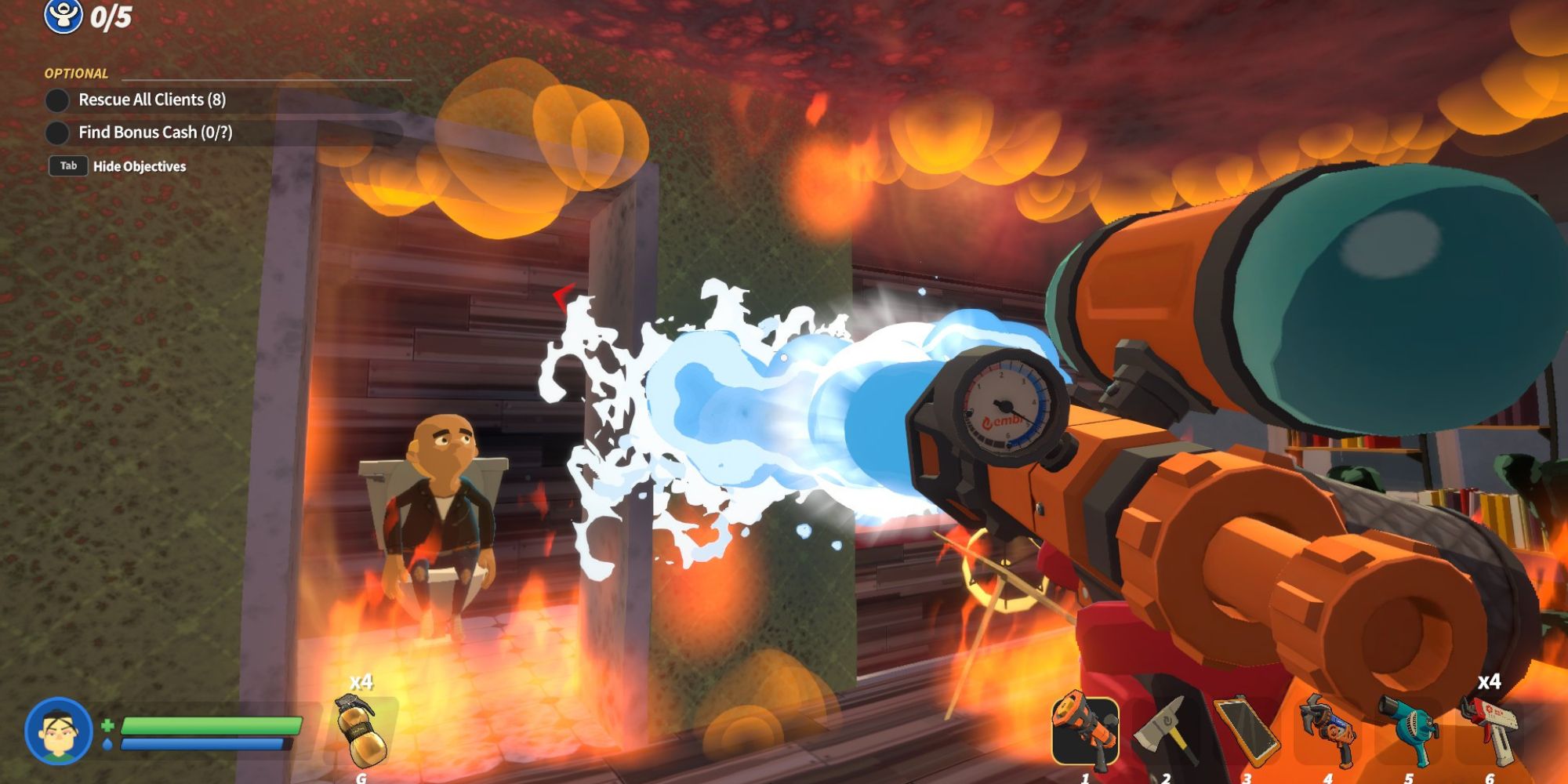 The Basic Hose may not sound particularly impressive, but it is perhaps the most useful tool in your arsenal. It is your standard flame repellent tool, dispensing streams of water at the nearest burning wall, table, or toilet. However, while fairly mediocre at first, with a handful of upgrades under its belt, it becomes a killing machine. Well, in the sense that it kills fire really really well.

With upgrades like focused streams, increased capacity, and even the ability to use it as a jetpack, the Basic Hose can become far more than the sum of its parts. It truly is an indispensable tool and one everyone should have firmly placed in their respective loadouts. After all, who doesn't want to fly through a city while being propelled into the air by a stream of water? 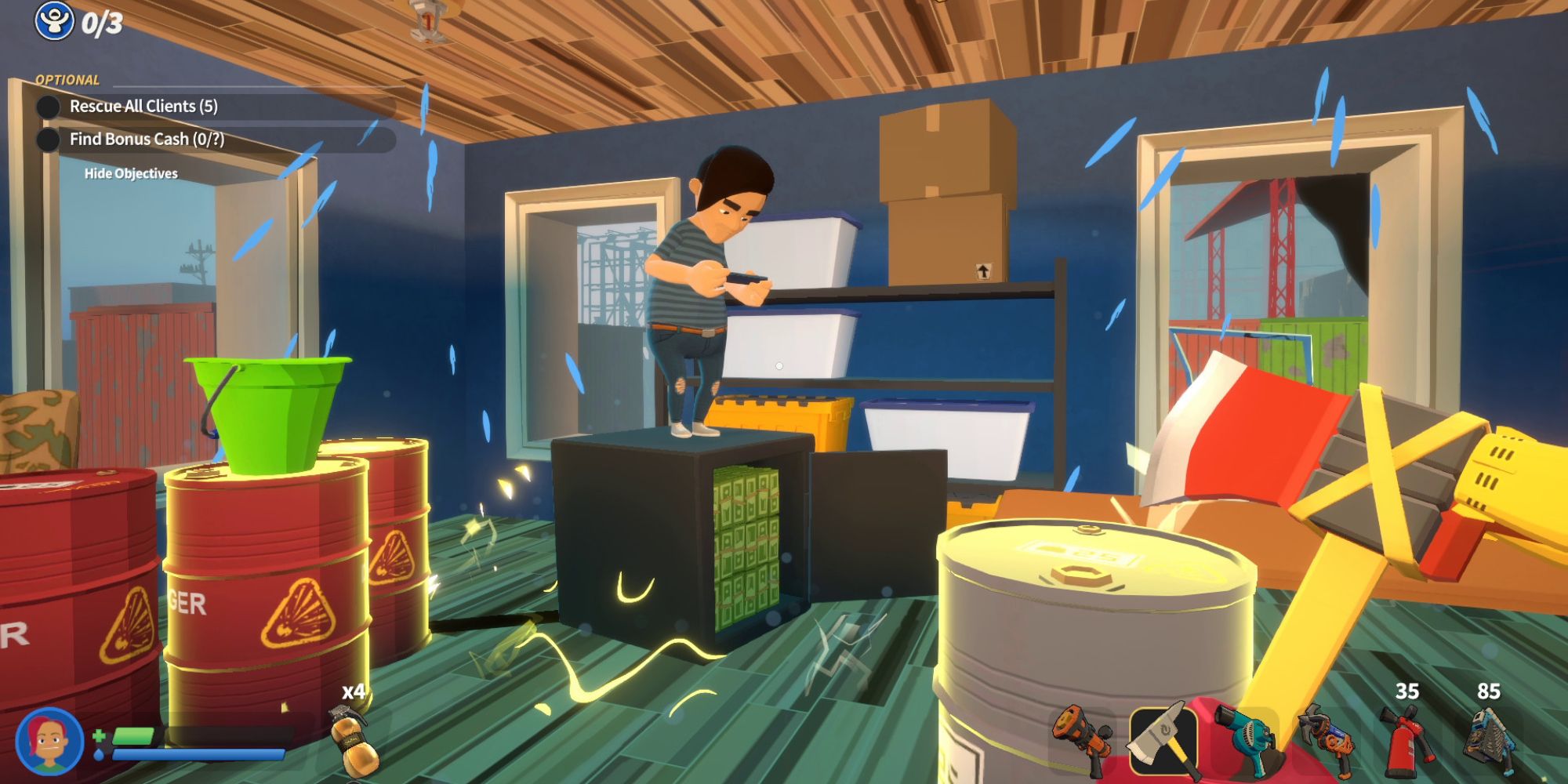 Like the Basic Hose, the Fire Axe is one of the first tools you'll be given. You can use it to break down doors, boxes, boards, and barrels, but its primary purpose is to get into places you otherwise couldn't access. When you first get access to it, you may notice it's a little slow at breaking things apart. Fortunately, while this is a minor inconvenience in the early game, by the time the Fire Axe is fully upgraded it is unstoppable.

Once fully upgraded, the Fire Axe should have no issues breaking things apart, and will grant you access to the various hidden caches of money strewn about. Additionally, once you've purchased the Client Safety Insurance upgrade, you'll be able to break windows while carrying a civilian to safety. It's a small bonus, but one that will save you a lot of time. 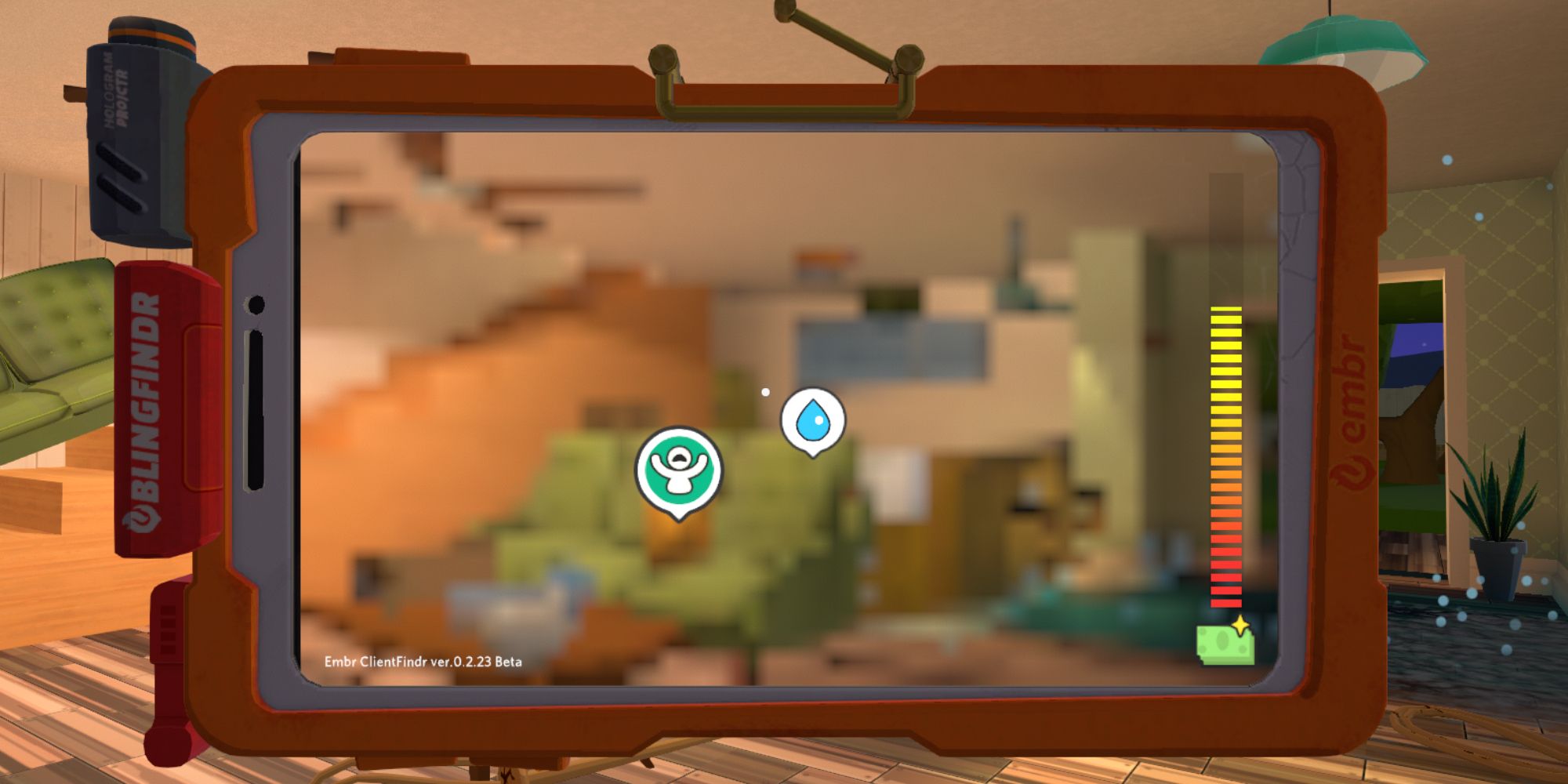 What would a firefighter be without their Client Findr? Well, probably a normal firefighter as these don't exist in real life, but in Embr they are a priceless piece of equipment you'll need to find those pesky civilians. As the people you've been hired to rescue tend to sit on the toilet playing on their phones, they can be initially quite difficult to find. Fortunately, with the Client Findr equipped, you won't have any issues finding them.

By peering through the Client Findr you can quite literally find your clients. They'll appear as little green icons, and by heading towards their location you can rescue them from any danger and bring them to safety. It's a nifty tool that seems entirely impossible, but helpful nonetheless. Without the Client Findr, it is safe to say that you would struggle quite a lot. 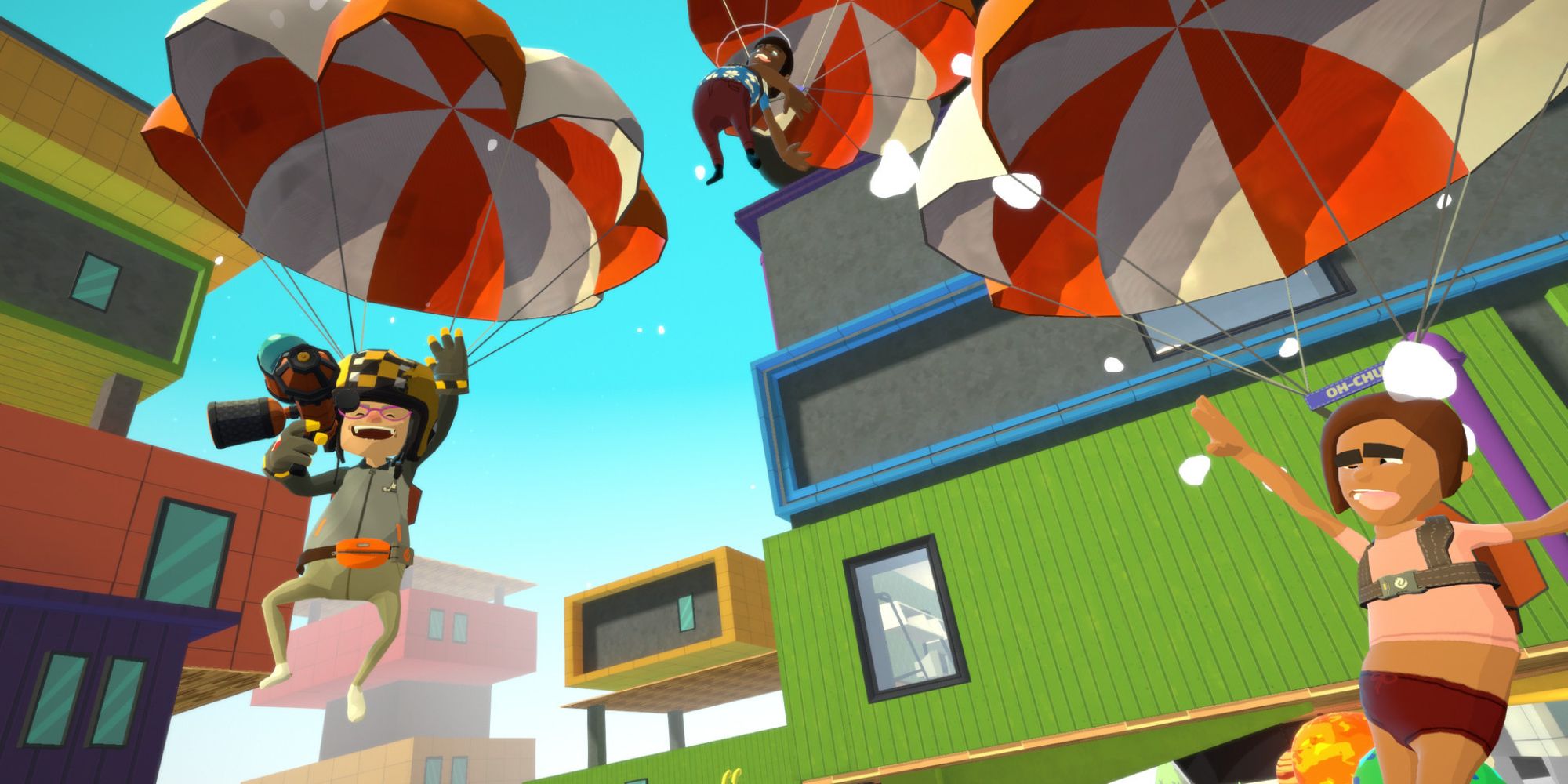 Jumping out of a plane and deploying your parachute in real life can be an incredibly daunting task. Fortunately, your fears of freely falling through the air are gone in Embr as using parachutes is exceptionally fun. The Parachute tool is quite expensive to purchase, but worth every dollar once acquired. As you can imagine, it ostensibly allows you to leap and bound from anywhere and descend to safety rather easily.

Like the many other elements of Embr, the Parachute succeeds because of the added humor it brings to the table. Embr is a game all about having as much fun as possible, and the Parachute certainly helps with that. While it's not a necessary tool by any stretch, it is a lot of fun to use and absolutely worth picking up. 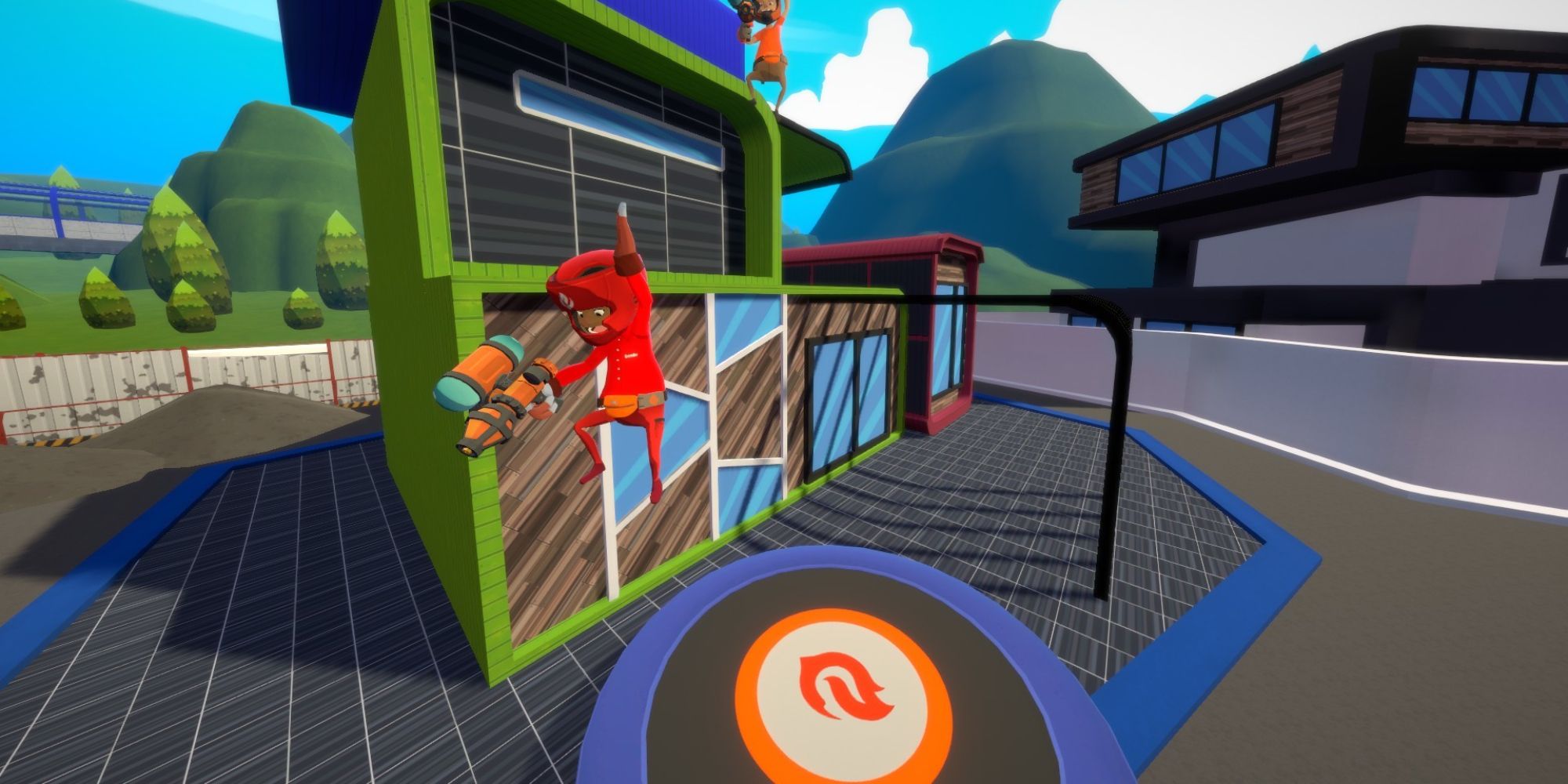 The Trampoline is likely one of the first tools you'll pick up as not only is it rather cheap, but you'll likely want to use it as soon as possible after getting a taste of it during the tutorial. The Trampoline, not unlike the Parachute, is an incredibly fun tool to use. However, it serves a very practical purpose as well. By throwing civilians down and onto it, you can somewhat safely land them into the end zone.

Having one of these at hand is exceptionally helpful as it can save you precious time and prevent you from having to dawdle down several flights of stairs in order to save someone. The ease and convenience it brings already make it a worthwhile tool – however, the sheer amount of childish fun you can have bouncing on it with your friends elevates it just that little bit more. 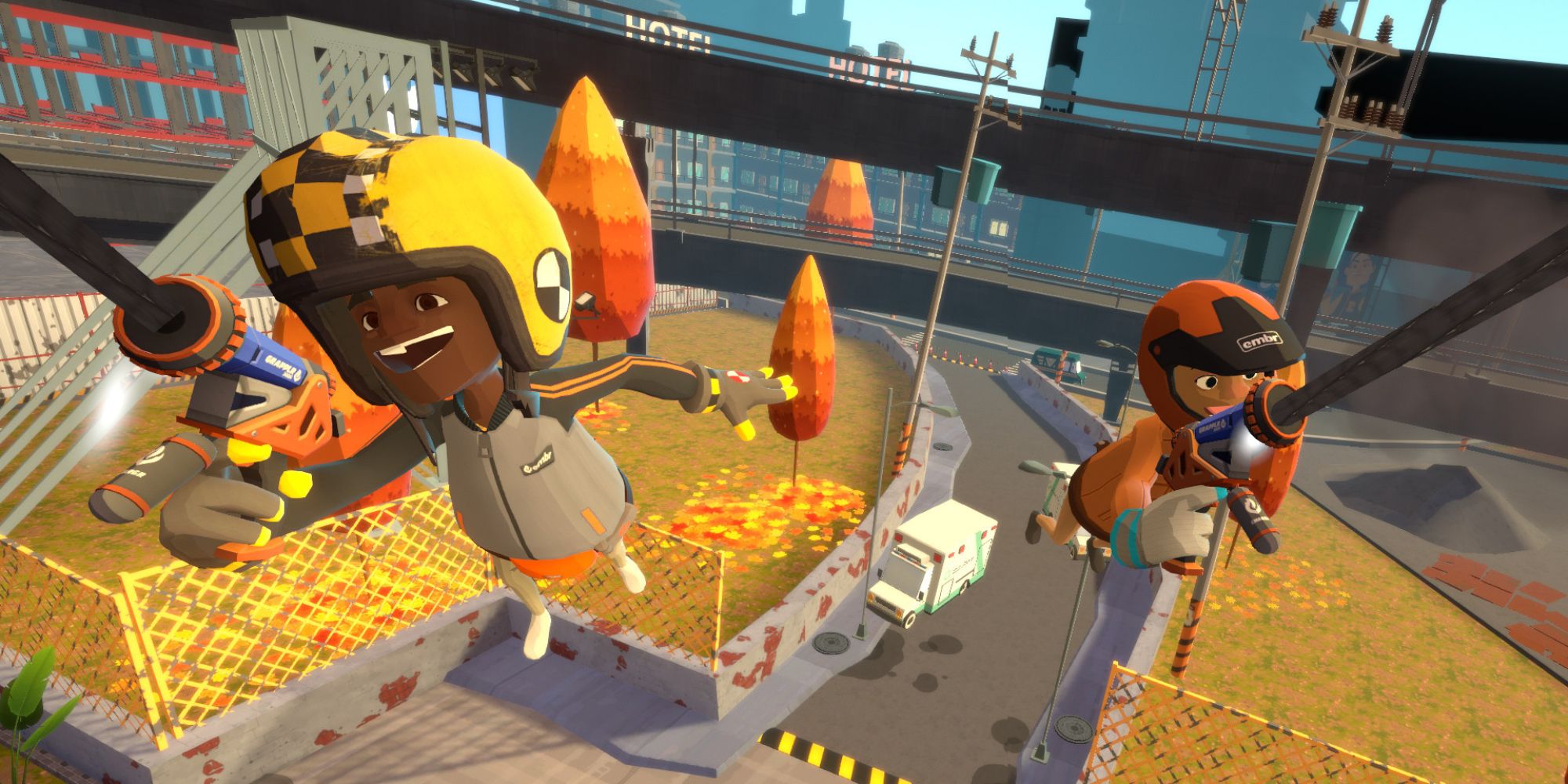 Getting around in Embr can be rather tricky. While there are tools at your disposal from the beginning – such as the Ladder that can help you reach faraway locations – for the most part, in the early stages of the game you're stuck trekking around treacherous areas in the hopes of finding a civilian in need of rescue. Fortunately, the Grappling Hook is here to save the day.

The Grappling Hook allows you to zip across each level rather quickly and reach difficult targets with relative ease. While you probably won't feel like Spider-Man, the Grappling Hook is the next best thing to being a web-slinging superhero. With games like Halo Infinite popularising the fun – albeit slightly frantic – form of travel, it only makes sense that Embr has it too. It certainly makes firefighting that much more enjoyable. 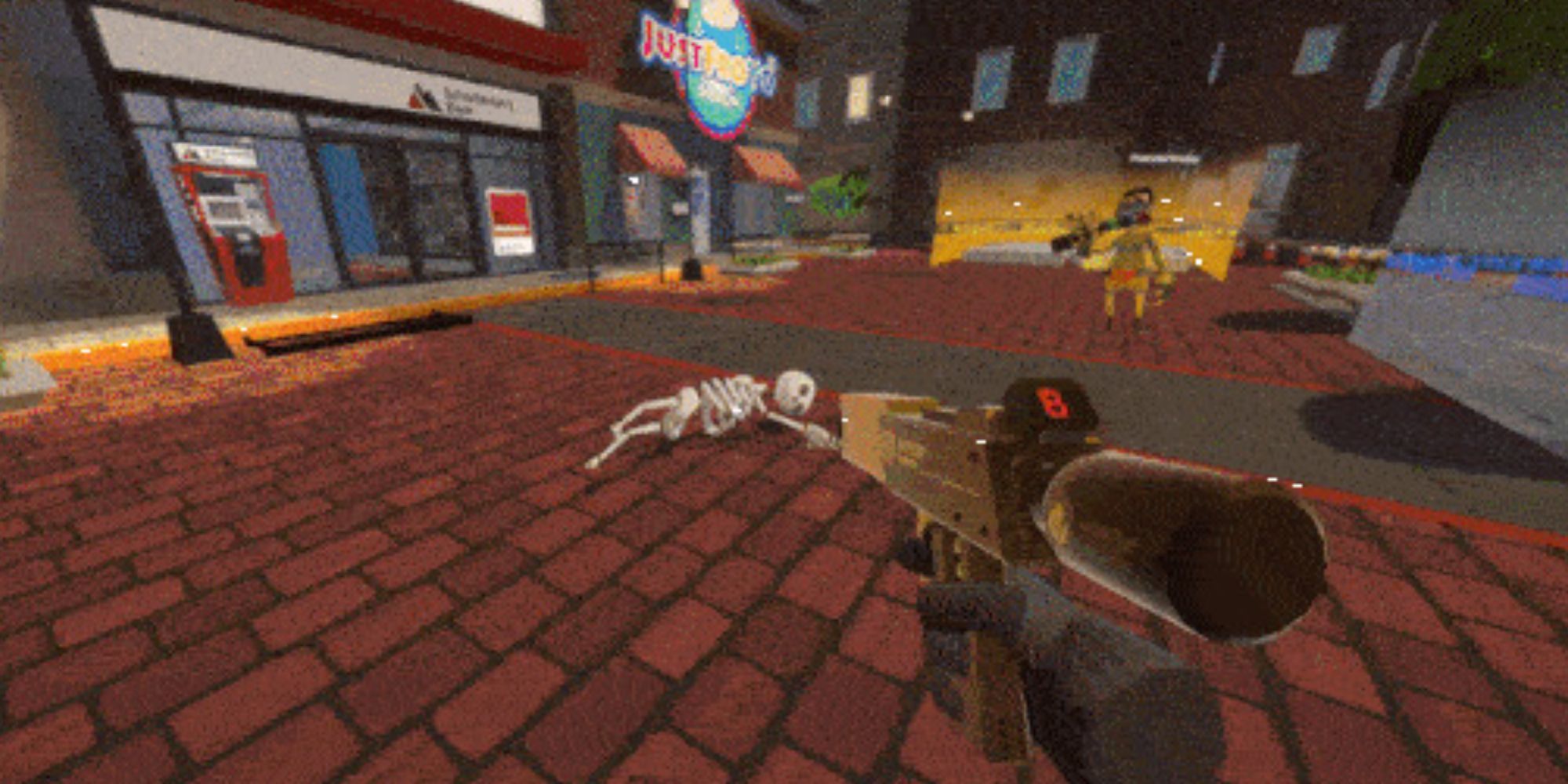 Embr is by far one of the best co-op games of this generation. It offers frantic fun with friends and an environment full of peril and a plethora of opportunities for mayhem. However, with all the flames, electricity, and exploding barrels getting in your way, it's safe to assume that amongst all the carnage and fun, you're bound to get a little hurt. Fortunately, you can purchase a Healing Needle that'll have you and your friends feeling as right as rain in no time.

The Healing Needle is a worthwhile addition to your arsenal as it not only allows you to heal yourself whenever you're in a bit of a pinch, but it also allows you to heal your friends. After heroically running into a burning building to save a bunch of ungrateful civilians, you're bound to need a little restoration, so it's great that the magical Healing Needle is here to help.