You are here:
Home / The Isle Of Bigsnax Review – A Side Dish Of Vegetables

The Isle Of Bigsnax Review – A Side Dish Of Vegetables

Heading back to the Island of Bugsnax was a strangely rewarding experience. Having reviewed and guided the game the first time around pre-launch, I hit 100 percent completion with no guides to help me out. In fact, I had to catch every creature and note my methodology to write guides of my own. I don't say this to brag – it's a fairly easy game for the most part – but to explain that my experience playing the game was very different to the vast majority of players. Returning for the Isle of Bigsnax DLC (which meant starting from scratch as I tested out the soon-to-launch Xbox Series version rather than continue my complete save) was a relatively tranquil affair. Aside from the Bigsnax themselves, I already knew how to catch each of the 'snax, and knew which were important for quests, which made the whole thing much more chill. It's still a great game, but I'm not sure the new elements tip the scale very much.

As well as the Bigsnax, which I'll get to in time, there's also a new Animal Crossing-style home customisation system. I'm starting with that because it unlocks early, but also because it's a major disappointment. The idea is neat enough, and it's true that the homes of the other Grumpuses don't have much in the way of personality either, but it feels oddly half-baked for a gimmick that's being offered as part of a fresh, complete experience on new platforms alongside a seemingly major update.

Related: Please Pay Attention To This Year's Tribeca Games SelectionYou begin with an empty wooden hut, and can slowly fill it with desks, lights, a bed, decorations, the whole works. Except it's not the whole works. Bugsnax is a short, eight-hour game and you don't even get to add walls until you bring Chandlo back to town halfway through. You get rewards for completing tasks, but the tasks are so few and the rewards so meagre it barely feels worth it. Rather than a separate plot strand for catching specific Bugsnax, rewards are given for completing various side quests, of which there just aren't enough. At 83 percent completion, I've earned 28 rewards and I'm still sleeping in a little sleeping bag and either have to use my original shelves of rotten, broken wood, or have two lab desks installed. 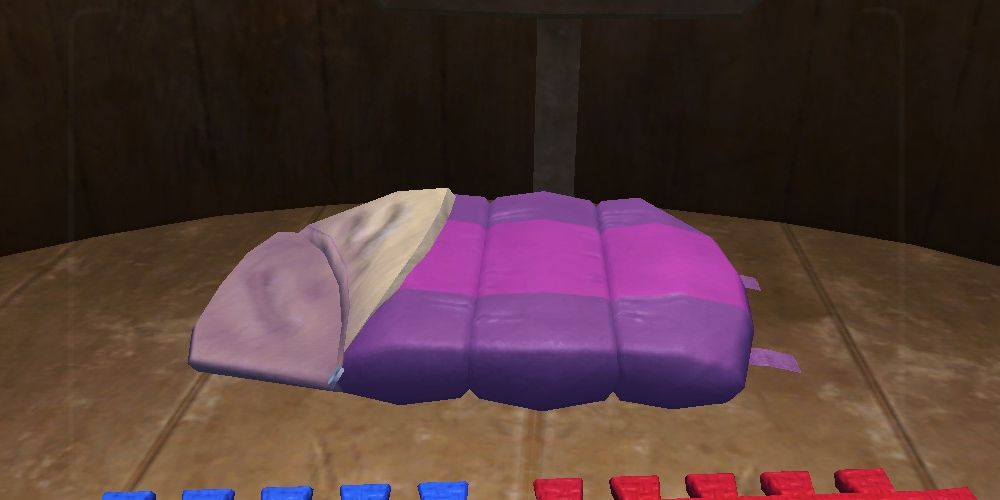 I do, however, have eight options for trinkets (only three can be displayed at once), as well as four wall decorations for two slots, five plants for one slot, and three mats, also for one slot, although two of the options are a disgusting straw mat stained with different sauces and a pile of old newspapers. I have a single option for wallpaper, a horribly garish bright blue cloud painting, as if Andy's Room in Toy Story doubled up as an arena for Laser Quasar. There’s a range if you dig deep, but you shouldn’t really have to.

There are also funny hats you can give Bugsnax at Gramble’s farm. I have found a single hat in eight and a half hours of play. 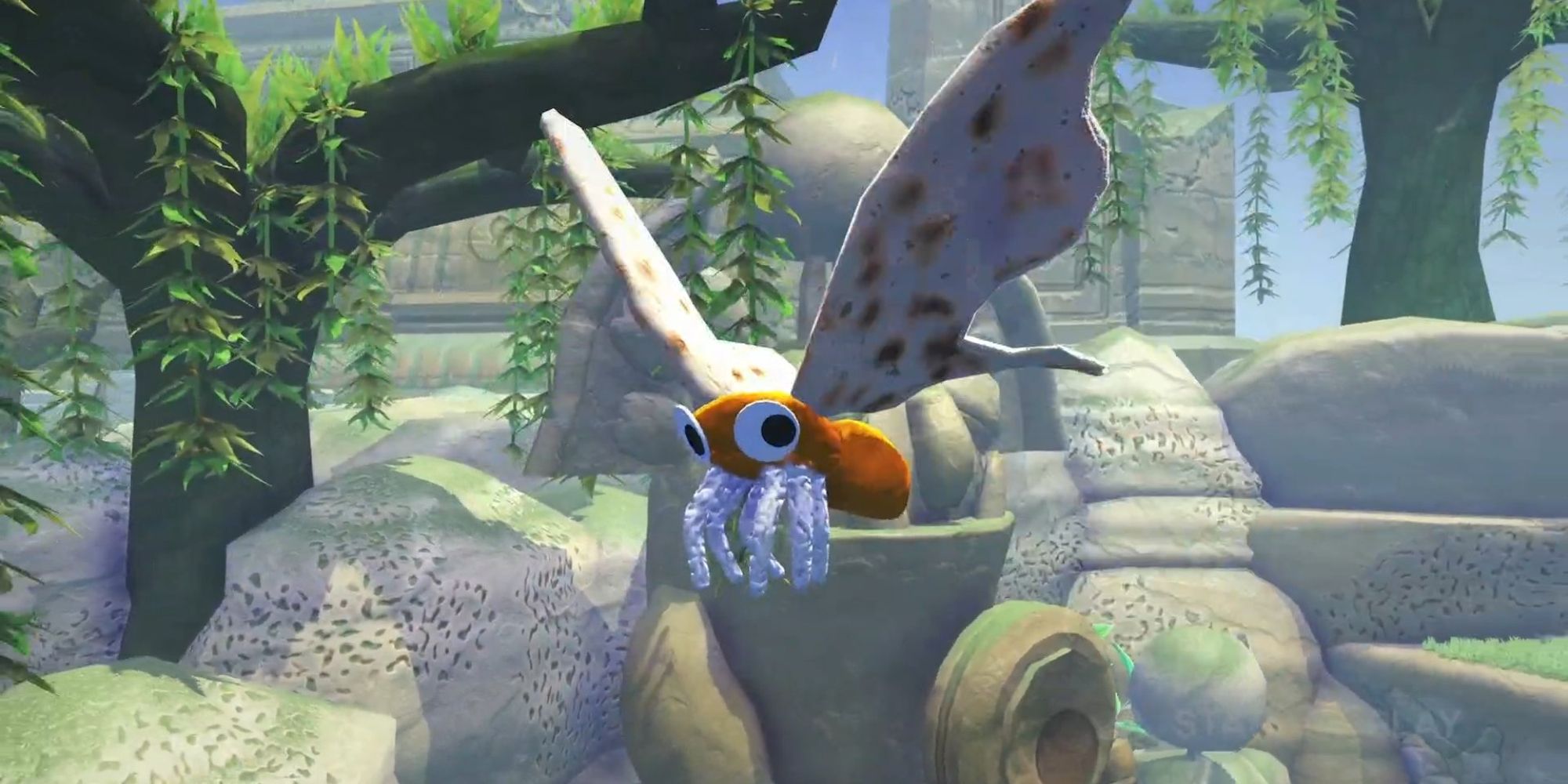 Despite Bigsnax being the selling point of the DLC (it is called The Isle of Bigsnax, after all), I was most looking forward to the homecrafting portion. That might have been a disappointment, but at least I still had the Bigsnax, right? Well, sort of.

The Bigsnax, just as their name promised, are Bugsnax, but big. The problem is this makes them too big to catch. In order to catch them, you have to find a way to shrink them down, which makes it all a little less fun. In a lot of cases, it just takes throwing some nearby powder at them, although some require more complex methods. I loved the pie-based creature, where you'll need to yank off the clasps of the plastic lid before you can even attempt catching it, while the pasta lobster is one of the best designs in the entire game. But it's essentially just one extra zone, and it's annoying that a slot is wasted on yet another burger, who just needs to be shrank down and tripped before you can scoop it up. It’s fun, but it’s not really catching big snax as was promised. 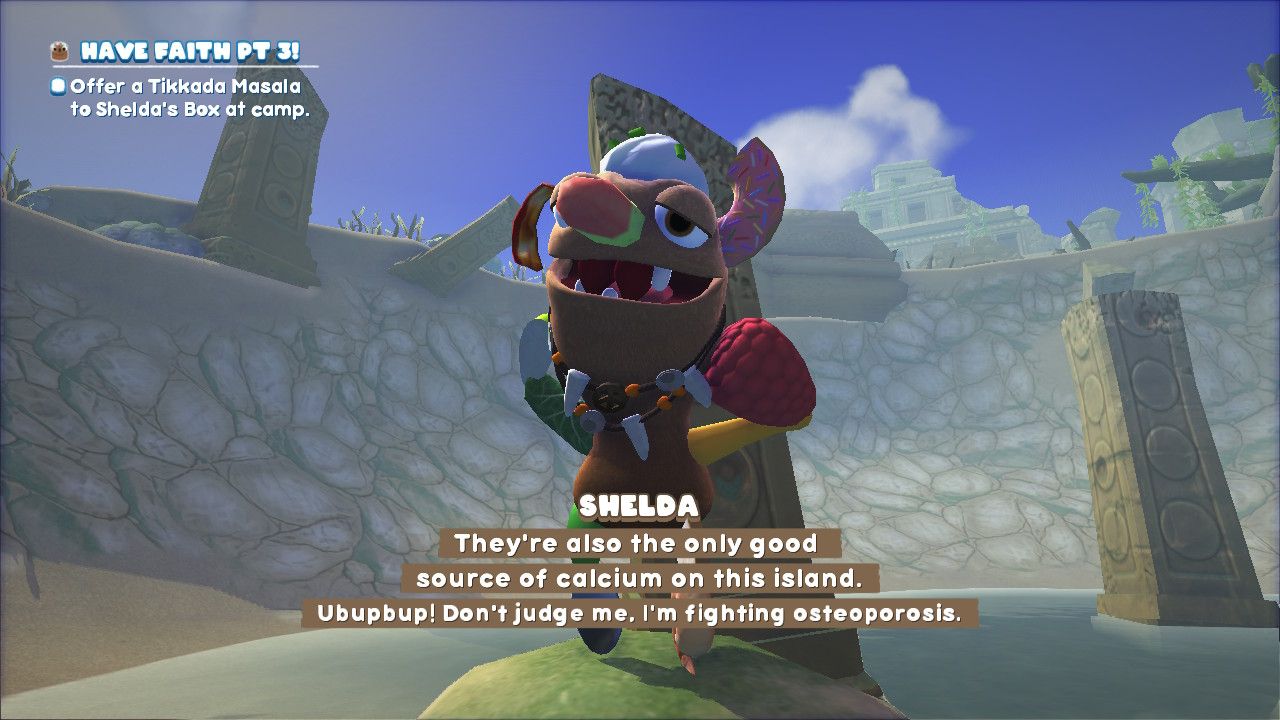 It's also a little flawed in its approach. Everyone's ranking of the Grumpuses will differ, but I imagine most people will have Shelda right at the bottom. She arrives late, has limited impact on anything, and is generally annoying. I see the logic in giving her another chance here, but I'd rather someone I already like. Shelda is joined in the DLC by Chandlo (a good pick), Triffany (logical, but not too interesting), Floofty (see above), and Snorpy, who just watches from the sidelines and has limited impact. I'm also not sure it's too much fun that new players need to complete Snorpy's quests to unlock the DLC, and then Shelda's, Floofy's, and Triffany's in order to begin. Once you have the necessary gadgets, that should be enough to set sail.

Even though the two new elements were a bit of a let down, I'd still thoroughly recommend new players try out Bugsnax as it comes to its new platforms, as it’s a delightfully whimsical take on the catch-'em-up, and the narrative goes to strange, dark places – although it perhaps doesn't commit to the bit as much as it should. Bugsnax is a great game for newcomers, no doubt. For returning players? Well, don't expect much from the new customisation of your house, and while the Bigsnax are just Bugsnax by a slightly different name, if you liked Bugsnax and you want to catch more tasty critters, the DLC has some creative new creatures for you to sink your teeth into.