You are here:
Home / The Hundred Year Kingdom: Beginner Tips

The Hundred Year Kingdom is a fun simulation game where you, with the help of one of five real-life mythological goddesses, will take charge of a world and dictate what gets built. The aim of the game is to accrue as much Food, Production, and Culture as possible to ensure that your society thrives.

You will do this mostly by constructing buildings that work well with each other and forming powerful synergies – but there are other things to consider, such as your goddess's unique powers and the rare Golden Ages that can take things to the next level. 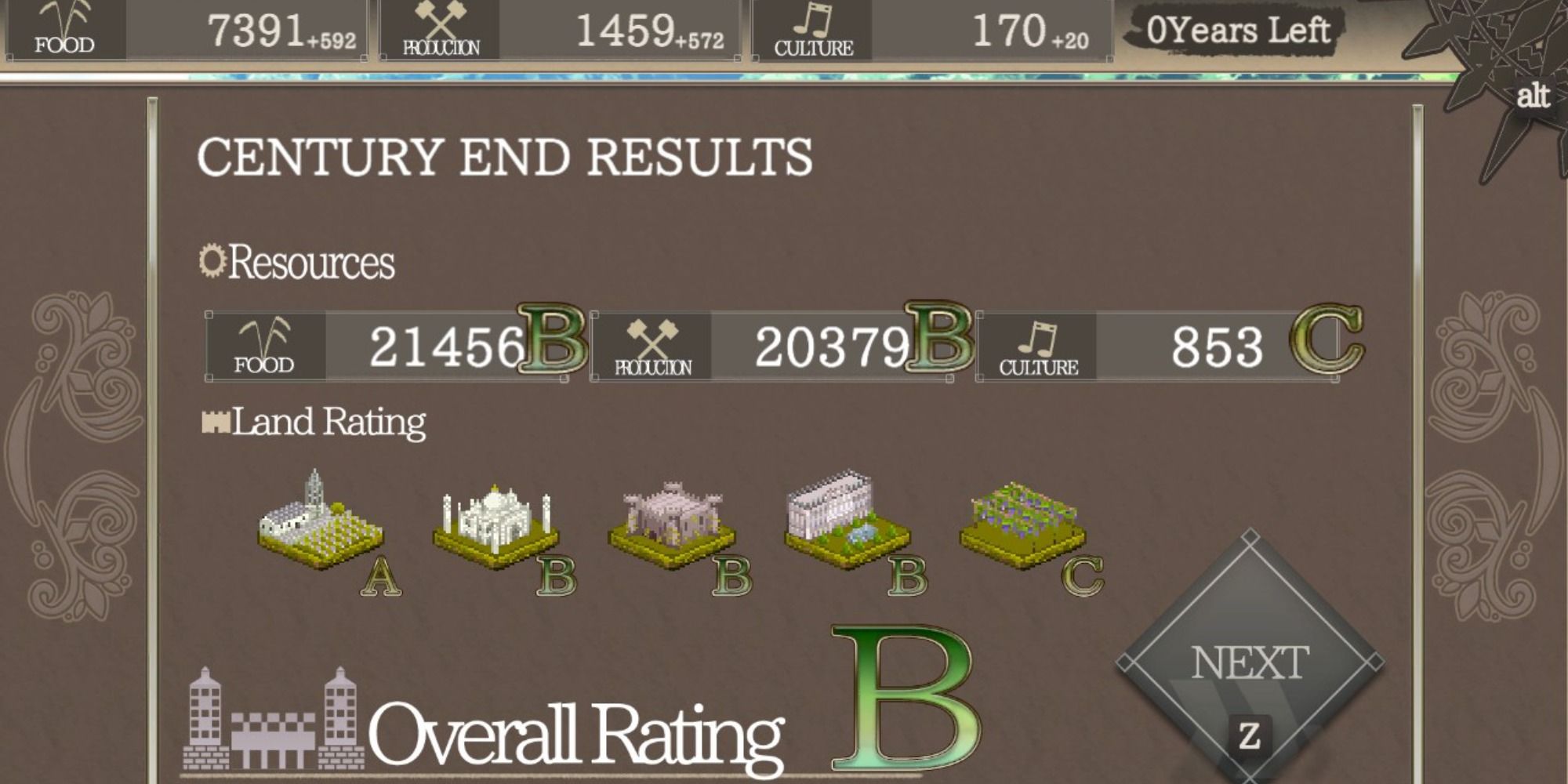 The Hundred Year Kingdom's title is a pretty important one, as it reveals what you need to know about the time limitations inherent in its gameplay. Every world you play with will only last for 100 turns (or years).

The following actions will progress the world one year: 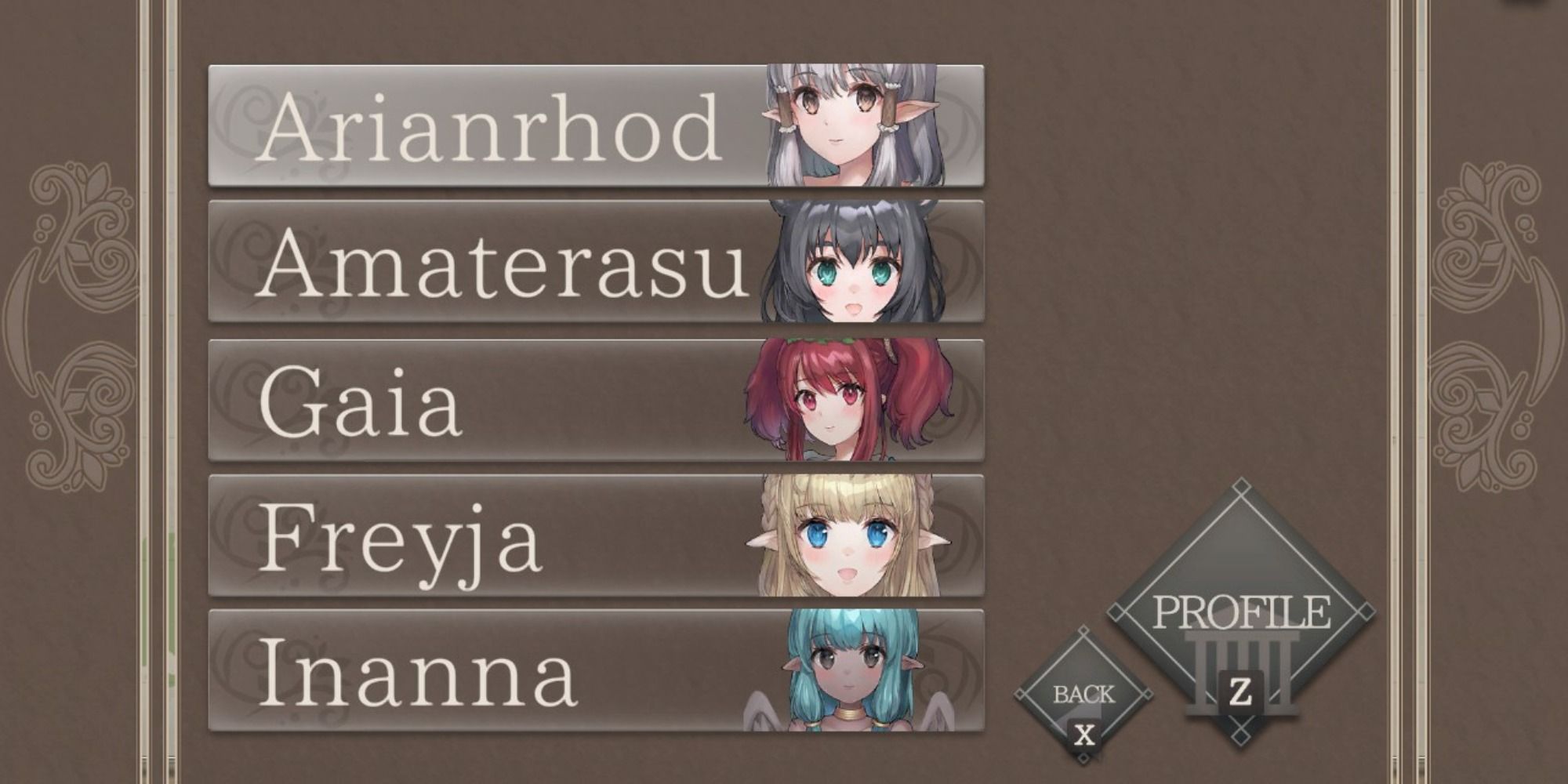 There are five goddesses/oracles in the game, and they will influence how your worlds develop thanks to two features they have:

As you play games with particular goddesses, they will level up. In addition, their unique buildings will level up – this makes them more valuable the more you play with them, enabling higher scores and more unlocks.

The table below details all five goddesses and their features.

As you can see from the table above, most goddesses will provide a certain amount of Food, Production, or Culture per turn based on their level. Gaia is different, though. Instead, playing with her will provide you with extra Plains tiles at the beginning of a game. This only begins once she's reached level two, where you'll start games with two Plains tiles. 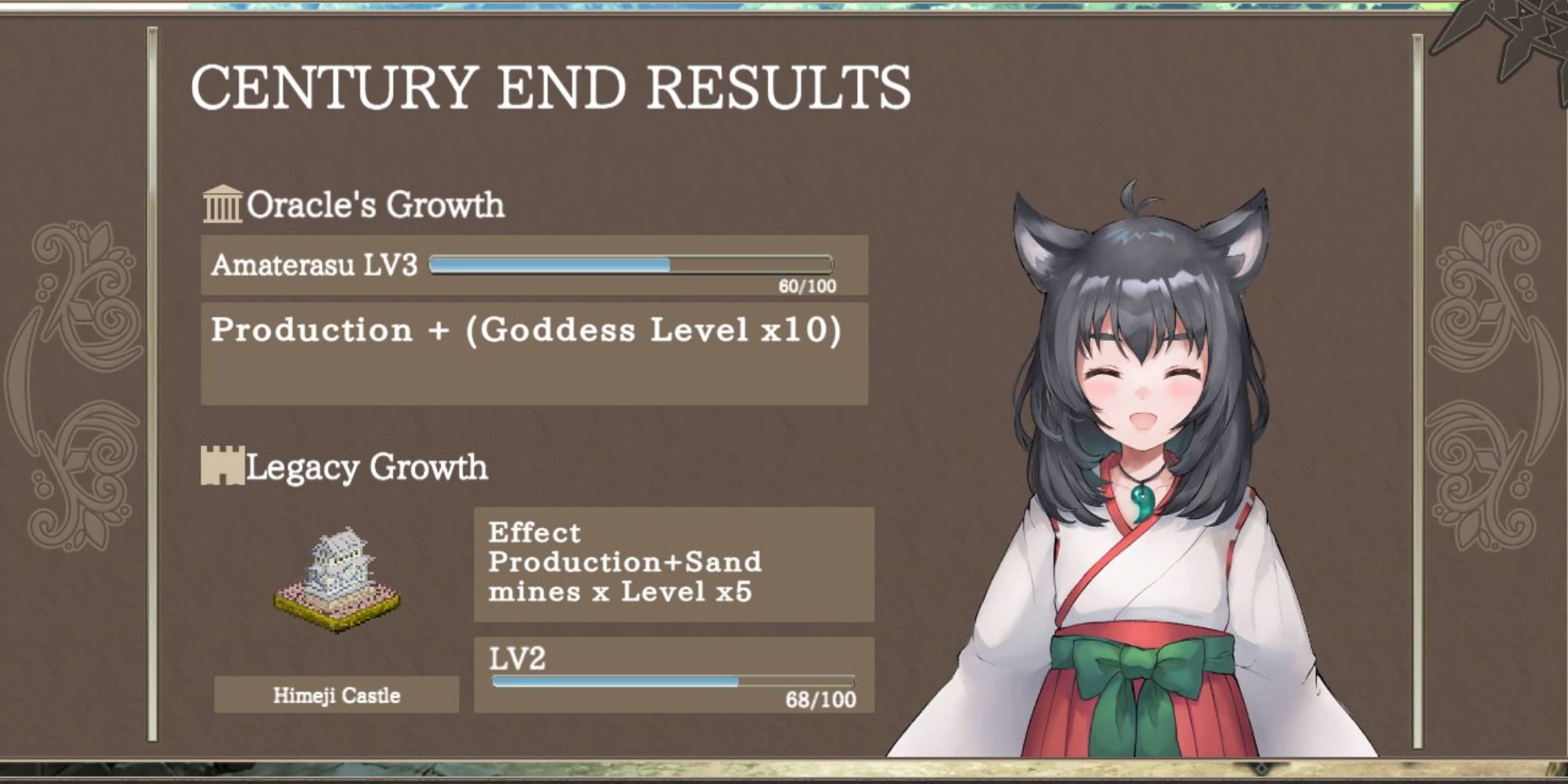 This second table explains what each of the goddess's unique buildings do.

As you can see from the table, most of these buildings will be quite weak until you level them up quite a lot. Eventually, they'll be incredibly useful constructions that you can base your entire building philosophy around.

Don't Be Afraid To Destroy 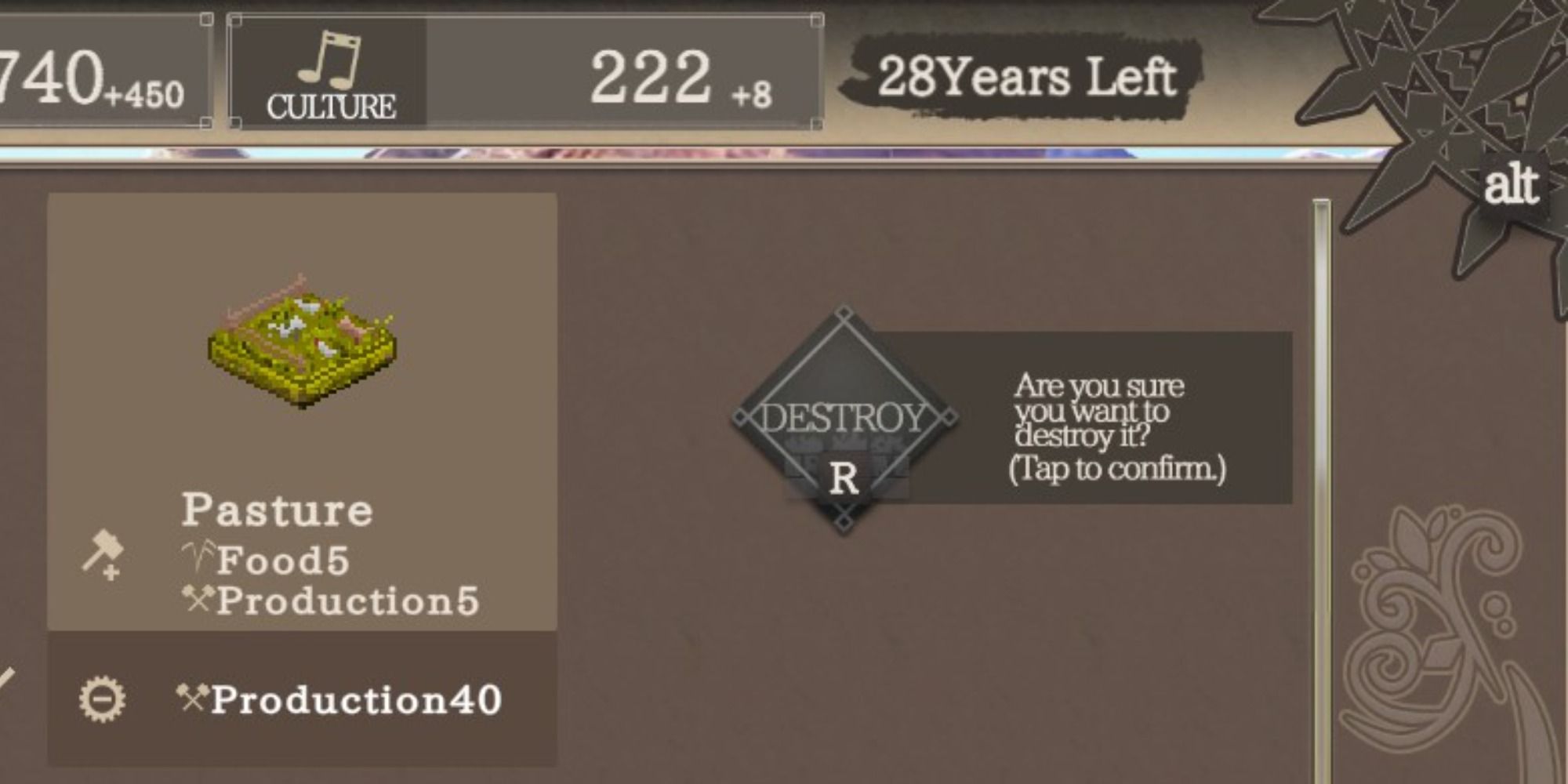 Many maps will force you to build things that aren't conducive to whatever strategy you're currently using. For example, lots of maps will have Potential Pastures and Potential Windmills, and it's only beneficial to choose one type of building to benefit from Legacy synergies.

If you enter the building's Status menu, you can destroy the building. This returns the tile to a flexible Plains tile.

The sound effect that plays when destroying a tile is very loud, high-pitched, and scratchy – beware! 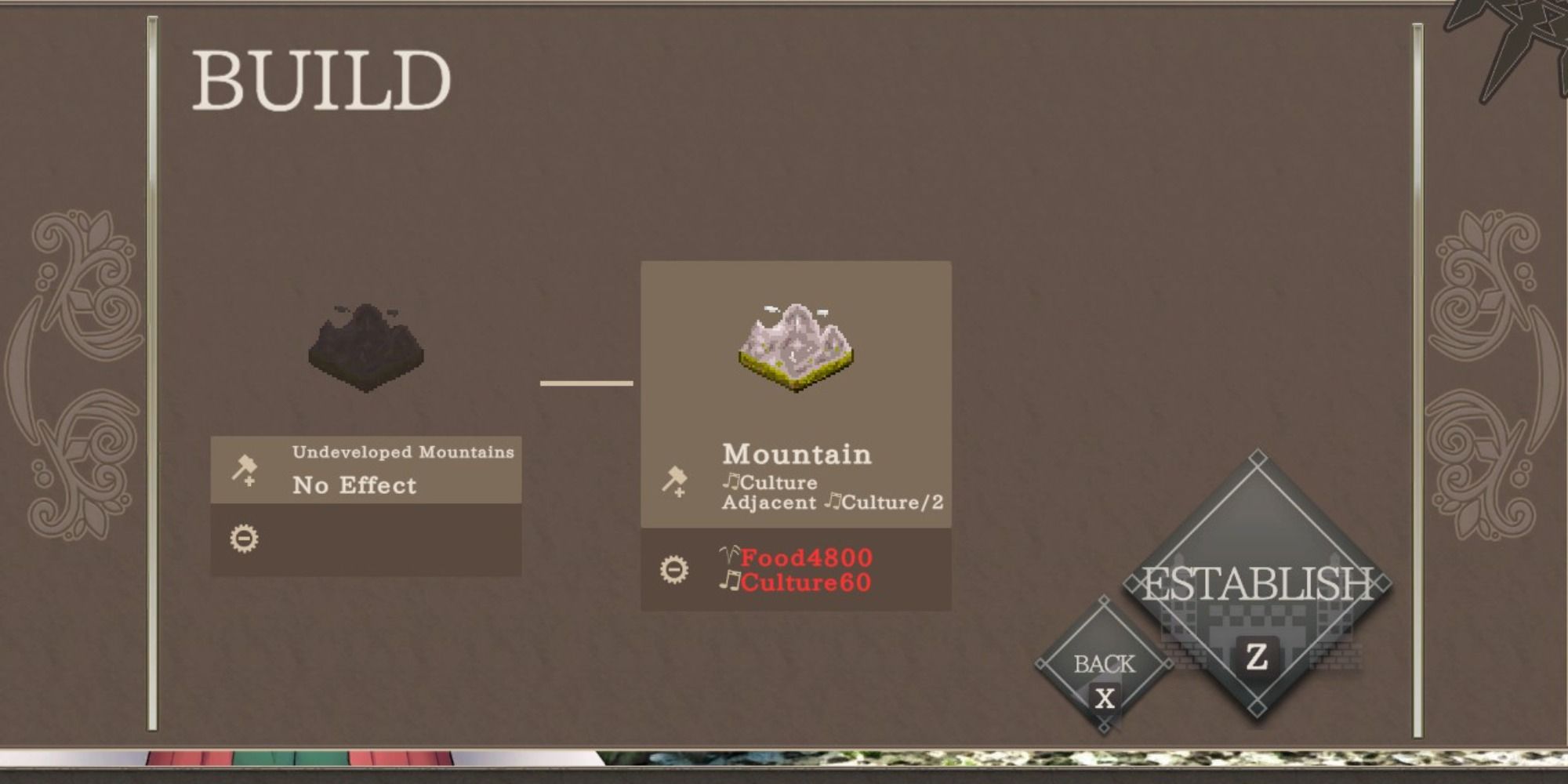 When you first start, it can be tempting to build according to the Offerings available to you. Offerings are one-time resource gifts provided for constructing certain varieties of building.

Offerings are very useful in the first few turns of a game. They will help you accrue the resources needed to develop new tiles – especially the sparse Culture needed for Plains and Village tiles. Once you have a strategy sorted out, though, it's better to ignore Offerings unless you just happen to come across them.

It's more efficient to commit to a viable strategy in the long run.

Plan For Those Valuable Tiles 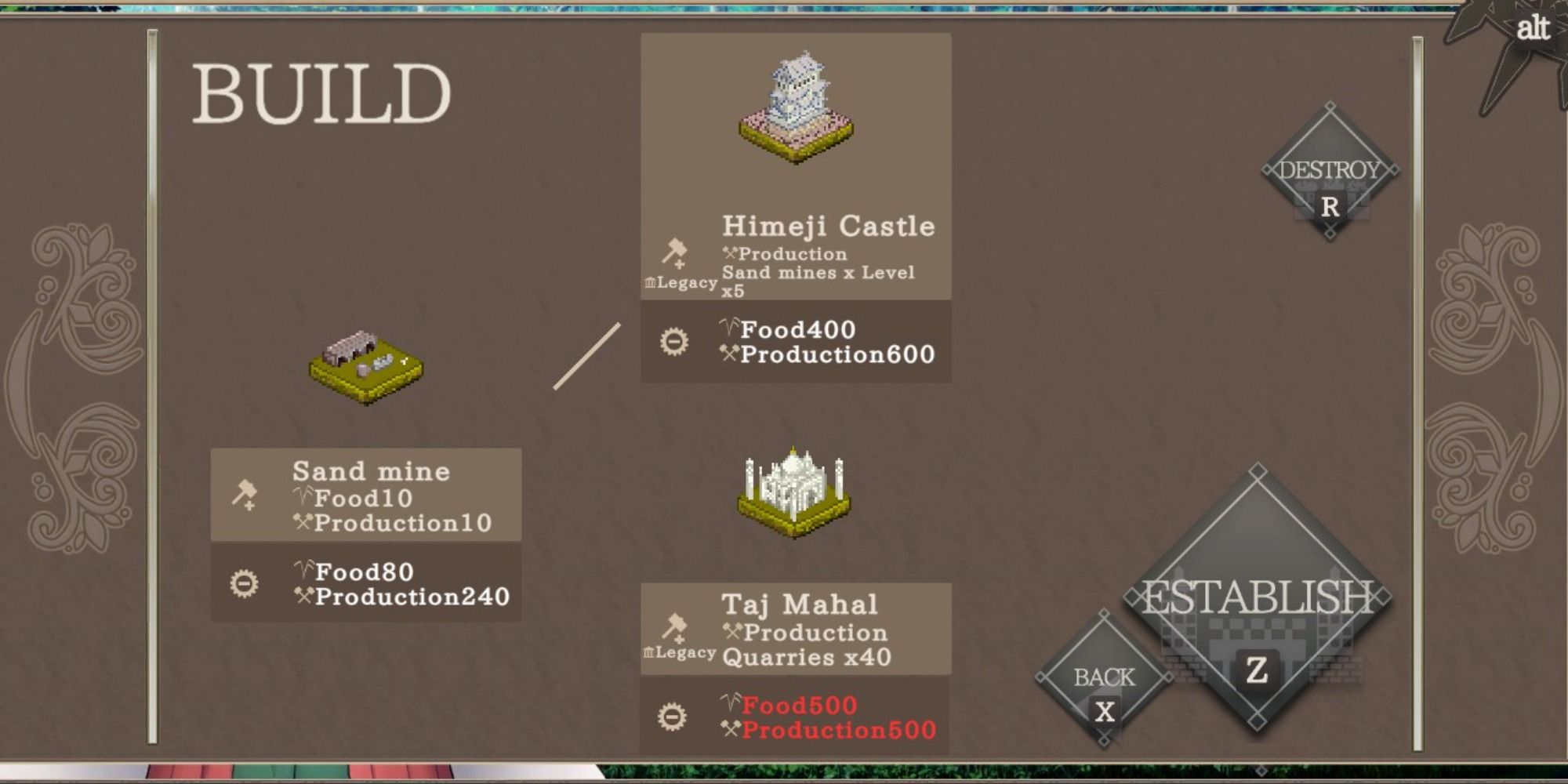 There are some very high-value tiles on many map types that you should use to your advantage. They usually produce resources based on the tiles adjacent to them.

To take advantage of these tiles, plan ahead. Once you know the types of buildings you're going to focus on, make sure your highest earners are placed in a way that makes the most of those expensive tiles.

A good example is the Mountain tile. Once developed, this tile will produce Culture equal to half the Culture of its adjacent. In addition, it can be further developed into either Machi Picchu or the Great Wall of China.

If you're struggling for Production, you could build the Great Wall of China and make sure it's surrounded by buildings that produce a lot of food, such as Amsterdam.