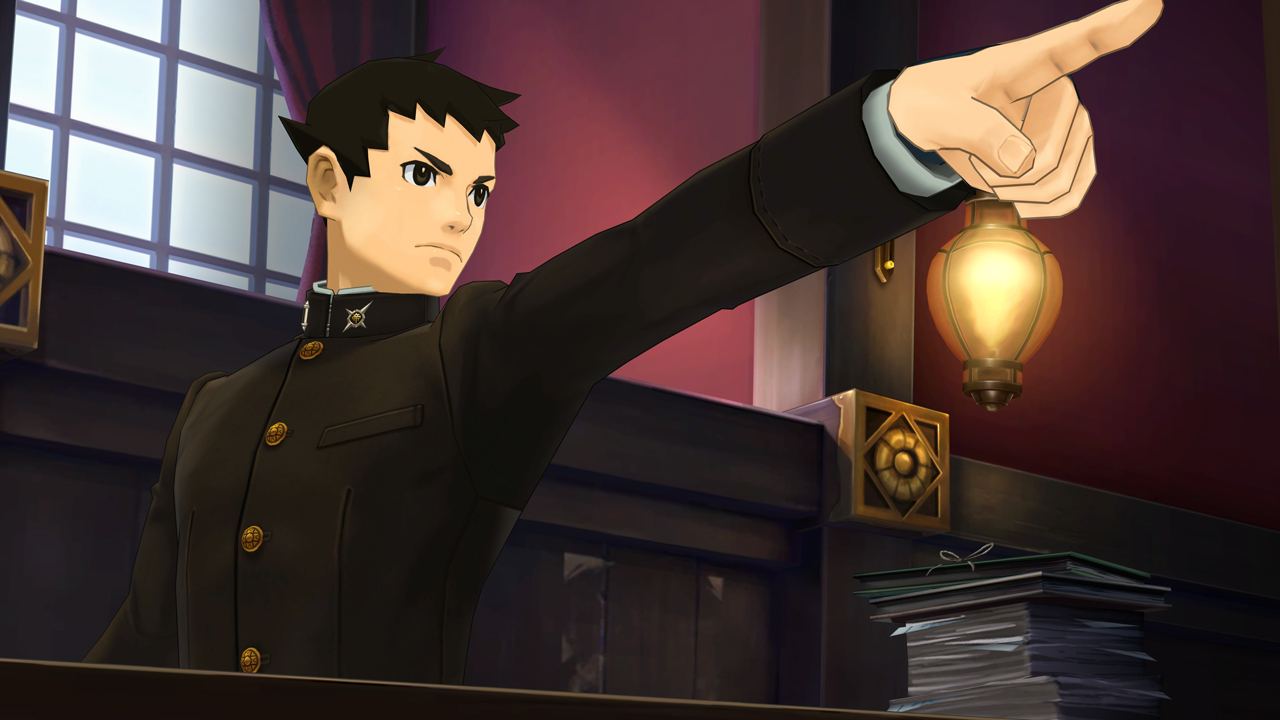 Capcom releases two Ace Attorney games for the price of one, as the ancestor of Phoenix Wright gets to meet Sherlock Holmes himself.

It’s been five years since the last Ace Attorney game was released in the West and we were beginning to worry that Capcom had given up on the series entirely. Spirit Of Justice on the 3DS was the last new one to come out here, but a year before it The Great Ace Attorney: Adventures launched in Japan and, until now, looked like it was going to stay there. A sequel was released in 2017 and now both of them have been localised and ported to the Switch and PlayStation 4 as one compilation – a move for which we have absolutely no objection.

The two games follow on directly from each other and take place in the Meiji era of Japan, which is roughly equivalent to the Victorian era in the UK. Things start off with Ryunosuke Naruhodo, ancestor of Phoenix Wright, being accused of a crime he didn’t commit and having to defend himself in a newly established Western style court in Japan. That set-up may sound like a hard sell to non-fans but soon enough events transpire that cause Ryunosuke and his assistant to travel to London in order to study the system of law there.

So many hijinks ensue that Ryunosuke can barely move a muscle without being accused of murder or having to defend someone else that has been. Not only that but he runs into Sherlock Holmes (awkwardly renamed as Herlock Sholmes for legal reasons) on the boat over from Japan and the two’s paths constantly cross in a consistently fun mix of Ace Attorney courtroom drama, Holmesian investigation, and legal farce.

If you’ve not played an Ace Attorney game before they’re basically visual novels, a style of game which is commonplace in Japan but which the series remains the only popular example of in the West. If you played the recent remasters of the Famicom Detective Club games there are very obvious similarities between the two, although by the standards of the genre Ace Attorney is more interactive than average – especially in terms of the investigation sequences which are similar to a simplified form of point ‘n’ click adventure.

There’s real puzzle solving in Ace Attorney, from abstract logic puzzles at a crime scene to the court-based cross examination sequences that have always been the core of the franchise – at least in terms of gameplay. The true heart of the series though is the characters, with the games essentially being absurdist legal comedies that only pay lip service to any sort of judicial realism.

That creates a challenge for The Great Ace Attorney though as it has to invent an entirely new set of characters, with even Sherlock Holmes and his supporting cast being all but unrecognisable in terms of characterisation. It was a risk (apparently director Shu Takumi was a big Holmes fan and wanted to a do a game involving him) but it’s paid off handsomely, anchored by the fact that Ryunosuke is a very likeable protagonist.

He has many of the same qualities as the early portrayals of Phoenix, in that he has almost zero experience and blunders through each case by the skin of his teeth, but he’s not just the same character with different hair. His reaction to visiting London, and how the various characters react to him, is always interesting and his growing confidence in his abilities is handled in a deceptively subtle way.

The culture shock of arriving in London is fascinating not only in terms of how it’s portrayed but the fact that the differences between the two countries, especially at that point in time, are being described by a Japanese writer. That’s somewhat diluted by the obviously American translation but it’s still one of the most enjoyable culture shock stories we’ve seen in a while, in any medium.

Although the overall tone is largely the same as usual, the underlying story is more serious since it’s set only a few years after Japan opened itself up to the West and the relationship between Japan and the UK is already fraught. Certain Japanese characters have a very idealised view of the UK, while many British characters are openly racist and dismissive towards Japan.

This is all handled with Ace Attorney’s typically light touch, via its comically overblown bad guys, but the central conflict of whether Japan should embrace Western ideals, and how much it should cling to its own cultural identity, does become a key plot point by the end of the second game.

Each Ace Attorney game usually introduces a new gimmick in court and this time it’s something that, bizarrely, is usually not a factor: a jury. Introduced once you get to London, the jury can interrupt you at any time and decide they’ve already reached a verdict. You then have to drive a wedge between them with your arguments, pointing out contradictions and ensuring the trial continues.

Other new features (unless you played the Professor Layton crossover) include the fact that there are often several witnesses at once in the dock – legal realism is to Ace Attorney what the laws of physics are to a superhero movie – and the whole ‘Dance of Deduction’ element with Sherlock Holmes. The great detective is portrayed as an impetuous anime pin-up who always jumps to the wrong conclusion, with you needing to reassess the evidence he’s pointed out to create an alternative theory.

This could easily have made Holmes an annoying pest but somehow he never really is, with the game’s gentle comedy and obvious love for the Holmes canon shinning through in all the many details and references, including several minor characters (or at least their names) from the original stories.

The Great Ace Attorney is an excellent addition to the series but it does suffer from all the usual problems, most notably that you’ve frequently figured out what’s going on but not the exact method by which the game wants you to prove it. That or you end up being several steps ahead of the story in general, which can make some sequences seem unnecessarily drawn out – although that’s a risk with any detective fiction.

Both games were originally released on the 3DS, so there’s nothing fancy going on in terms of visuals – although the graphics do scale up surprisingly well. Except for perhaps the worried side-to-side glances Ryunosuke pulls in court, which look like he’s got a couple of ping pong balls in his head. The soundtrack is great though, as it always tends to be.

With two full games and tons of side content, including smaller skits set at various points during the story, The Great Ace Attorney Chronicles is good value for money and a useful starting point for new players, since the first couple of cases are quite easy by the standards of the franchise. The unified story across two games works very well and the new gameplay additions are not only fun but make these probably the most interactive entries in the whole series.

Where things go from here we’re not sure though. There still hasn’t been an entry developed natively for a home format and Ace Attorney doesn’t necessarily have the pulling power to justify a large budget. With this release we’ve finally caught up with Japan (2011 DS game Ace Attorney Investigations 2 is now the only entry never to have got an official Western release) and while a new entry is supposed to be in development it’s still not been formally announced.

We certainly hope so though as The Great Ace Attorney Chronicles is a delight and proof that the series can still introduce new ideas, and take a slightly more serious tone, while losing none of its charm in the process.

In Short: Ace Attorney meets Sherlock Holmes turns out to be a great premise for a new game, with a subtle change in formula that works as both absurdist comedy and historical drama.

Pros: The new setting and characters are great, adding new gameplay features, a fun Sherlock Holmes pastiche, and an interesting historical perspective. Tons of content and a great soundtrack.

Cons: As usual, you’ll often find yourself a few steps ahead of the plot or unsure how to prove an obvious fact the way the game wants you to.