You are here:
Home / The Genius Of Mafia 2’s Twin Time Periods

Empire Bay, the setting for Mafia 2, is a fictional American city with an East Coast flavour. Artists from developer 2K Czech spent several weeks exploring the streets of New York City and Chicago, absorbing the distinctive atmosphere, culture, and architecture of both cities. They then channelled this research into a metropolis of their own creation, and the result is among gaming's most evocative virtual cities.

Or, more accurately, two cities. One of the most brilliant things about Mafia 2 is how it presents Empire Bay across two very different time periods. The first half of the game is set in 1945, towards the end of World War 2. Then, after protagonist Vito Scaletta spends some time in prison, we revisit the city in 1951, long after the war has ended. It's fundamentally the same city, but its ambience and aesthetic are majorly altered.

We're introduced to Empire Bay in February, 1945. Vito returns home from the Army, having just fought a campaign in Sicily. It's a snowy winter's evening, and as he walks through the old Italian neighbourhood where he grew up—still in uniform, carrying a suitcase—Dean Martin's 'Let It Snow' begins to play. It's an incredible piece of scene-setting, and I don't even mind that this version of the song was recorded in 1959. 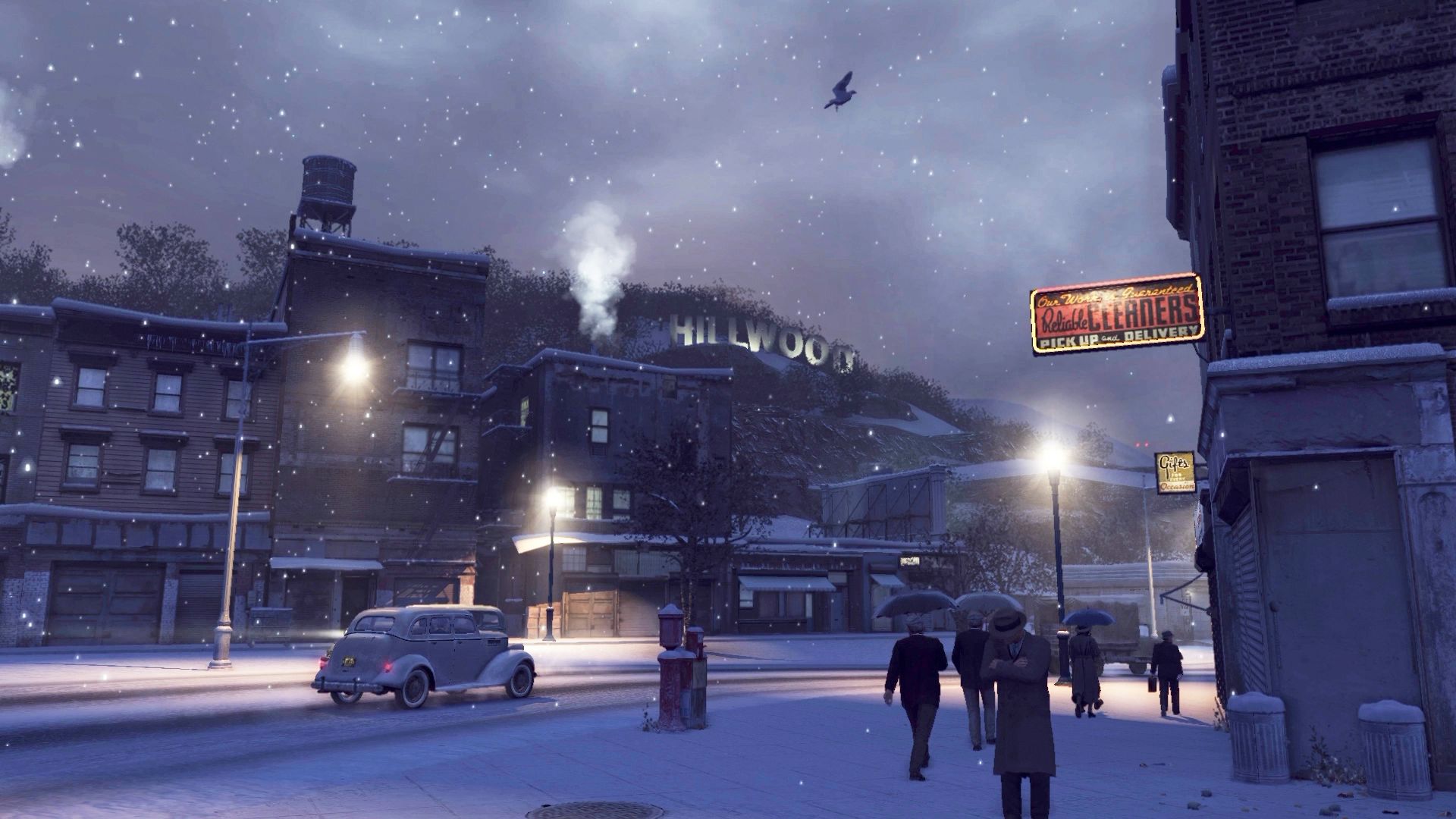 In the 1940s chapters of Mafia 2, Empire Bay is at winter's mercy. It's permanently dark, cold, and gloomy, with frequent blizzards setting in. Most of the main story missions take place at night. Pedestrians on the streets shiver, exhale plumes of breath, and occasionally slip on iced-over puddles. Snow piles up on cars, the sky is forever overcast, and there's a palpable chill in the air. You can almost feel the cold.

There are also clues that the war isn't quite over yet. This being February, we're still several months away from the Battle of Berlin, which ultimately seals Hitler's fate. Sometimes you'll hear the roar of plane engines overhead, and see military aircraft in formation. On the roads, Army trucks trundle back and forth. On the sidewalks, uniformed servicemen on leave mingle among crowds of well-dressed pedestrians.

Climb into a car—all of which are modelled on '40s classics such as Packards, Cadillacs, and Buicks—and you're treated to a selection of catchy period music on the radio. Tunes by Duke Ellington, the Andrews Sisters, Bing Crosby, Peggy Lee, and Benny Goodman help reinforce the time period. There are a few patriotic war songs too, recorded to lift the spirits of Americans back home, and crackly radio news reports.

Then everything changes. Vito ends up in jail, and we spend a chapter inside with him scrubbing toilets and fighting other inmates. When he's finally set free, Empire Bay has changed dramatically. The year is 1951 and the city is no longer bleak and snowy. It's bright, colourful, and green, with a radiant glow of post-war optimism. The sun burns in the sky and the downbeat tone of the '40s chapters are gone entirely.

No longer are the pedestrians on the street all wearing dark suits, hats and neat dresses. There's a variety of clothes, hair, and even the way people walk seems different. Vito returns home and is amused to see teenagers screeching around in hot rods listening to Buddy Holly. Rock ’n’ roll has taken over. The era of the teenager has begun. Mafia 2 captures this seismic shift in American culture after the war brilliantly.

This extends to the traffic on the street. The modest, bulky cars of the '40s are mostly gone, replaced by shinier, fancier cars—reflecting the post-war economic boom, and the American public's desire to start living lavishly again. Modern suburban houses spring up around the city. The developer didn't just slap a '50s skin on the city—it considered how a place like this would evolve and mutate in the years after a war. 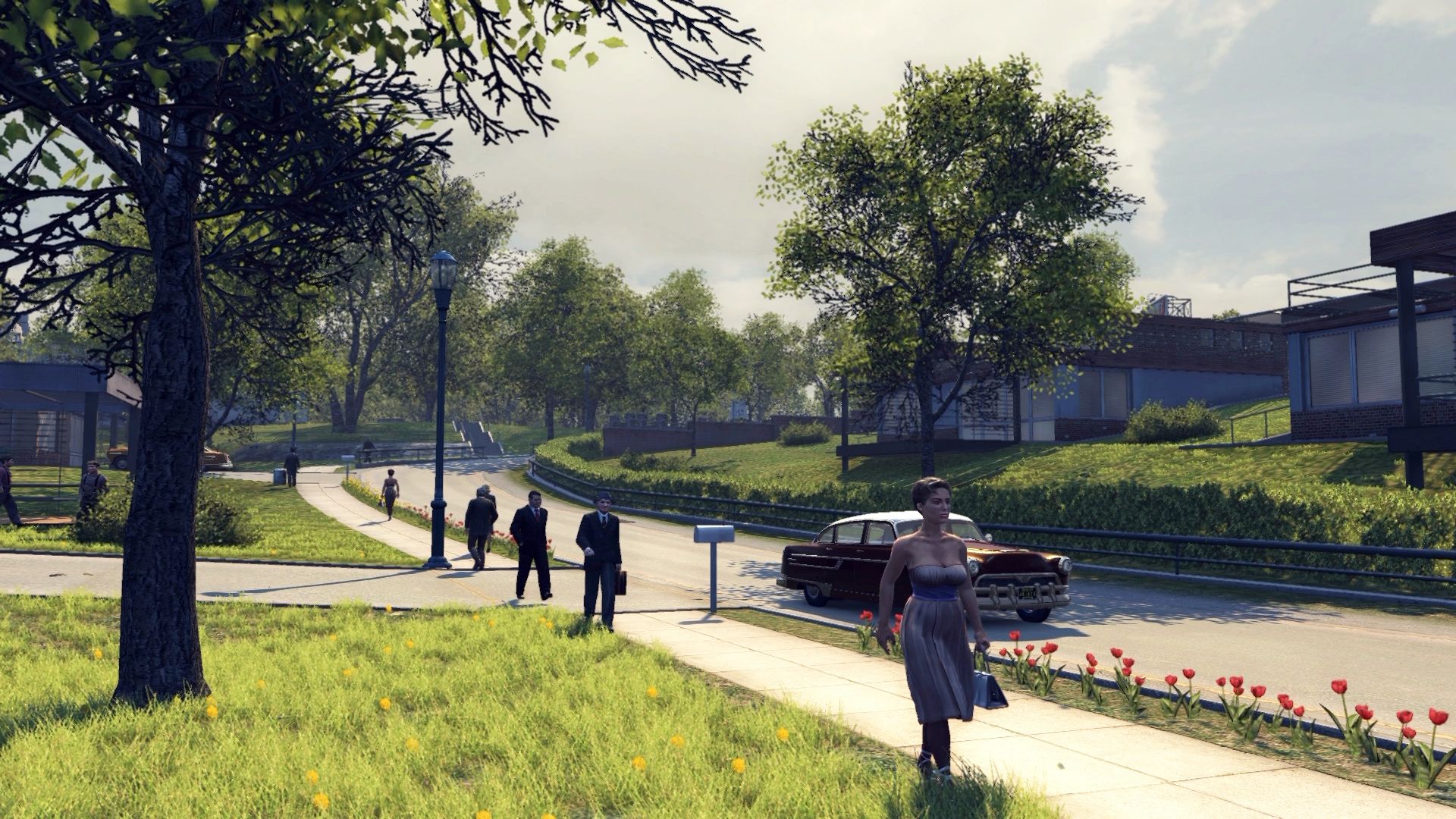 On the radio, the music is just as vibrant as the city itself. We hear tunes by Bill Haley, Eddie Cochran, The Crickets, Duane Eddy, and Ritchie Valens: all pioneers of a new kind of teen-targetted rock ’n’ roll, whose music signalled the decline of civilization for conversative Americans. Vito was only in prison for a few years, but the difference between these two time periods makes it feel like stepping into another world.

In hindsight, it was incredibly bold of 2K Czech to attempt something like this. Making one open world is hard enough, but creating two distinct time periods with bespoke cars, atmosphere, weather, pedestrians, music, and more? Ridiculous. But it pulled it off, and Mafia 2 is, to this day, a masterclass in creating a sense of time and place in a video game. I only wish we got to spend a bit more time in the 1940s.