You are here:
Home / The Evil Within 2: Every Boss Ranked (& How To Beat Them)

The Evil Within 2: Every Boss Ranked (& How To Beat Them)

The Evil Within games are known for their exciting monster design, adding an exciting twist to the horror game genre. The second installment of this franchise polishes the first game’s formula. It improves the survival horror setup’s vital features, like stealth mechanics, that allow you to pass through bosses using stealthy moves.

Whether you’re a long-time player or someone who just discovered this game series, boss fights are always something to look forward to, but they can discourage even the best of players. To make things easier for you, here’s a ranking of all the bosses you’ll encounter during the game’s chapters and where their weak spots are. 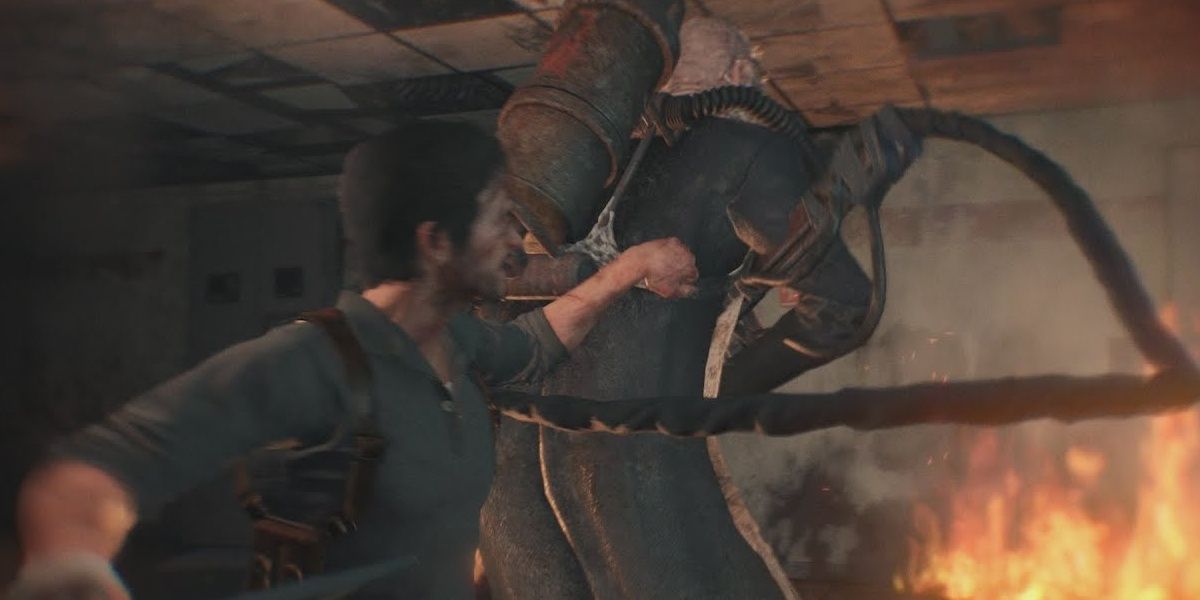 Liam isn’t a bad guy, just kind of a coward. Still, he aids Sebastian via radio. At some point during the game, Liam is transformed into a Harbinger by Father Theodore, and Sebastian will have to face him.

This boss behaves a lot like typical Harbinger, which means he’ll use his flamethrower all he can. The best you can do is aim for the head or stun him by blowing out the tank on Liam’s back. You can also try and take him down with stealth attacks (if you have the patience for that). After Liam is defeated, you’ll get his flamethrower. While it is broken, you can repair it to gain access to one of the most powerful weapons in the game. 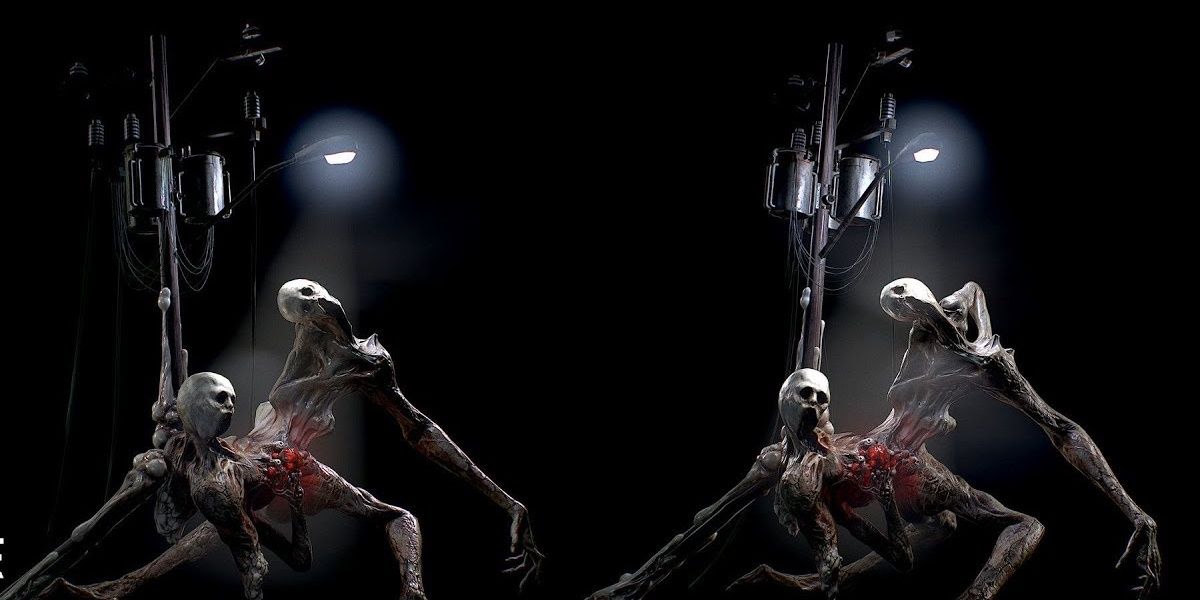 Effigy is a mini-boss Myra will summon during chapter 15. This one looks like two humanoid bodies merged (and fused with a telephone post for some reason). However, that same post gives Effigy its most dangerous feature — this monster can manipulate the post’s wires and harness its electrical power to use against its enemies.

This boss has several attacks it will use against you. It can crush Sebastian with its hands or create a temporary area of effect that inflicts electrical damage. It can also jump towards you, knocking you down. However, like all bosses, Effigy has a weak spot. Just go ahead and aim for the glowing part that’s in the monster’s midsection. On the same note, this particular creature is weak against freeze or explosive Warden Bolts (however, it’s better to use these as traps rather than firing them directly to the monster). 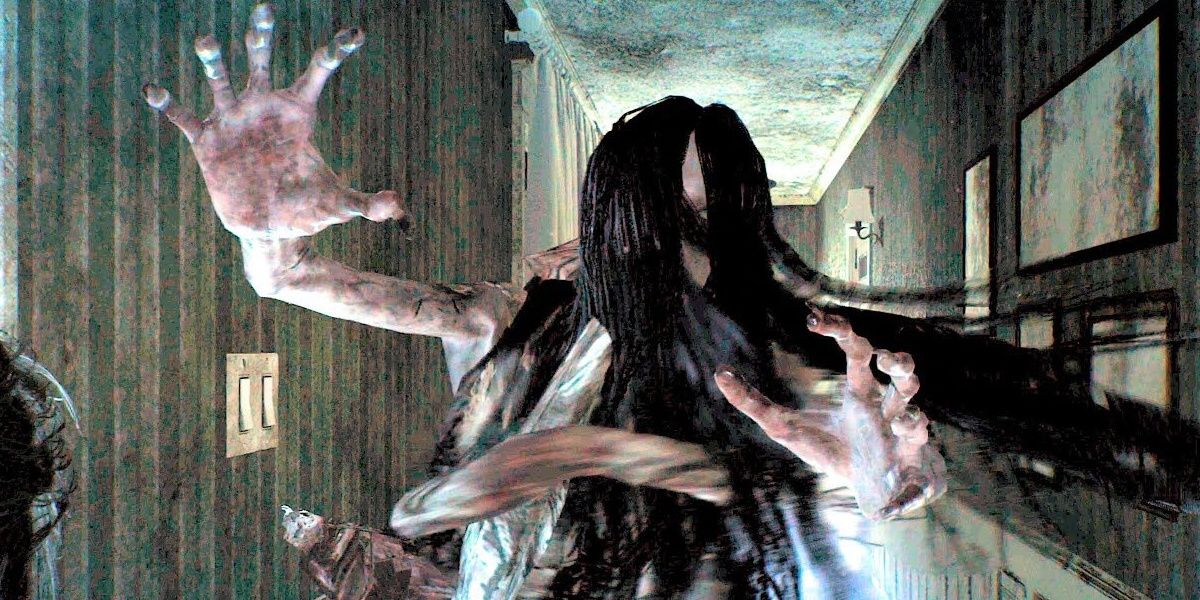 Anima is as mysterious as she is terrifying. She seems to roam the streets looking for people to attack, although she seems especially interested in Sebastian. You’ll notice Anima is close because it gets cold and fog starts to appear — she also sings in that “non-hostile” mode, so you can use her voice to ascertain how far she is from you.

1. During chapter 3, appearing behind Sebastian when he tries to leave the house at 336 Cedar Avenue.

2. During chapter 7 in the Juke Diner.

3. In chapter 11, when she ambushes Sebastian while he is trying to escape from the Restricted Labs of the Marrow.

While those are the three scripted moments in which you’ll see this creature, players can also encounter Anima randomly as they explore around (however, after chapter 11, she’ll be nowhere to be found). Either way, if you want to avoid her every time, make sure to study her movement pattern, listen to her humming, and try not to break any glass as this will expose your location. 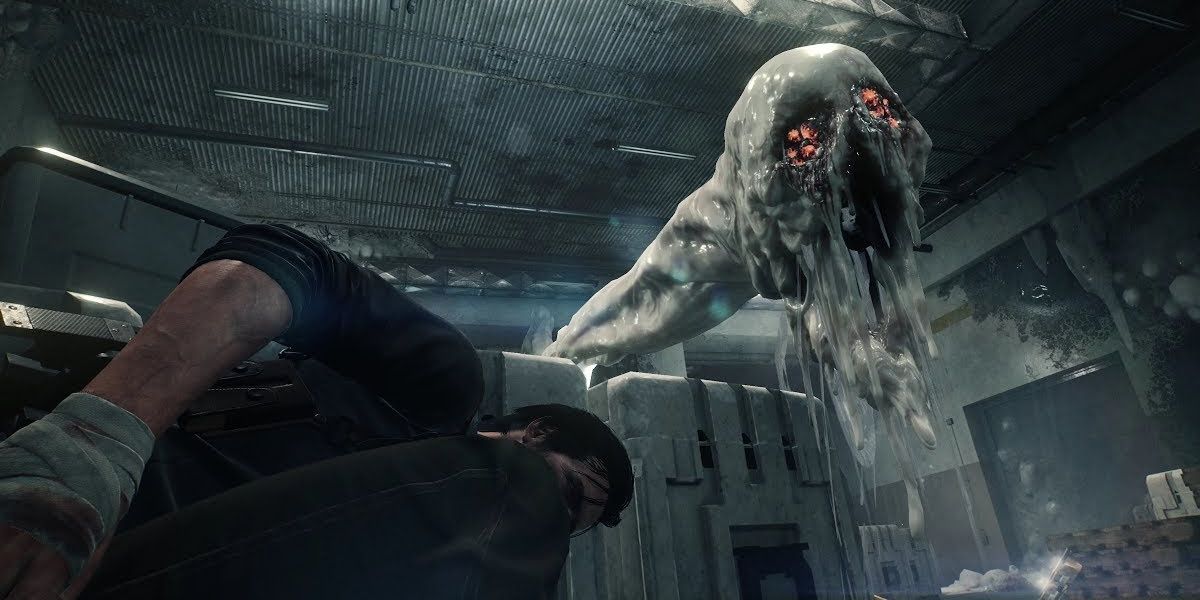 This creature looks like a floating skull covered in a white goo similar to wax. While that might sound silly, you shouldn’t underestimate this boss as the slimy substance his cover with slows down your character.

Sebastian will first encounter The Watcher in chapter 6 and then briefly in chapter 8. During its boss fight, you’ll have two options, either try to sneak past it or shoot your shot and kill it. The stealthy route will be really difficult as this boss slows you down and can summon hands anywhere. Still, it will save you tons of ammo.

If you want to attack this creature, go for the weak spots, like its red eyes. While doing so, try to avoid stepping on the goo and dodge The Watcher’s hands or spit attacks. Keep repeating this process of hitting the eyes and avoid the rest until the boss is defeated. 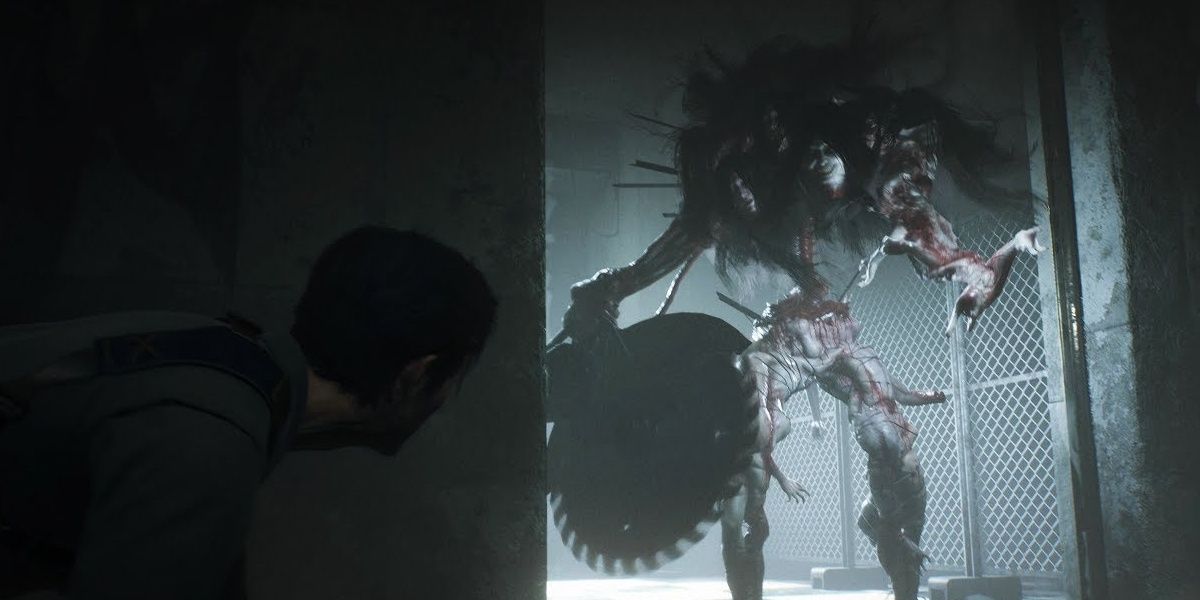 As terrifying as Guardian looks, it has a sad back story. This tall creature was created from the mutilated pieces of the women Stefano murdered. That’s why it looks like a bunch of heads glued together. If that isn’t scary enough for you, this boss’ right arm has a large buzzsaw blade ready to tear you apart.

You’ll encounter this type of creature three times in the game, during chapters 2, 5, and 7. This enemy doesn’t have a particular weak point, so to defeat this boss, use shock bolts since the Guardian has a low tolerance to their effect. A fully upgraded explosive bolt could also do the trick.

Moreover, go for weapons like Sawed-Off Shotgun and the Sniper Rifle since those two deal significant damage to the Guardian’s heads. Finally, one of the best ways to fight against this one is to use the environment to your advantage. For example, you can lure the Guardian into a gasoline puddle and then shoot at it to catch the monster on fire. You could also use oil barrel traps and camera stasis traps to slow down the creature and shoot at its heads. 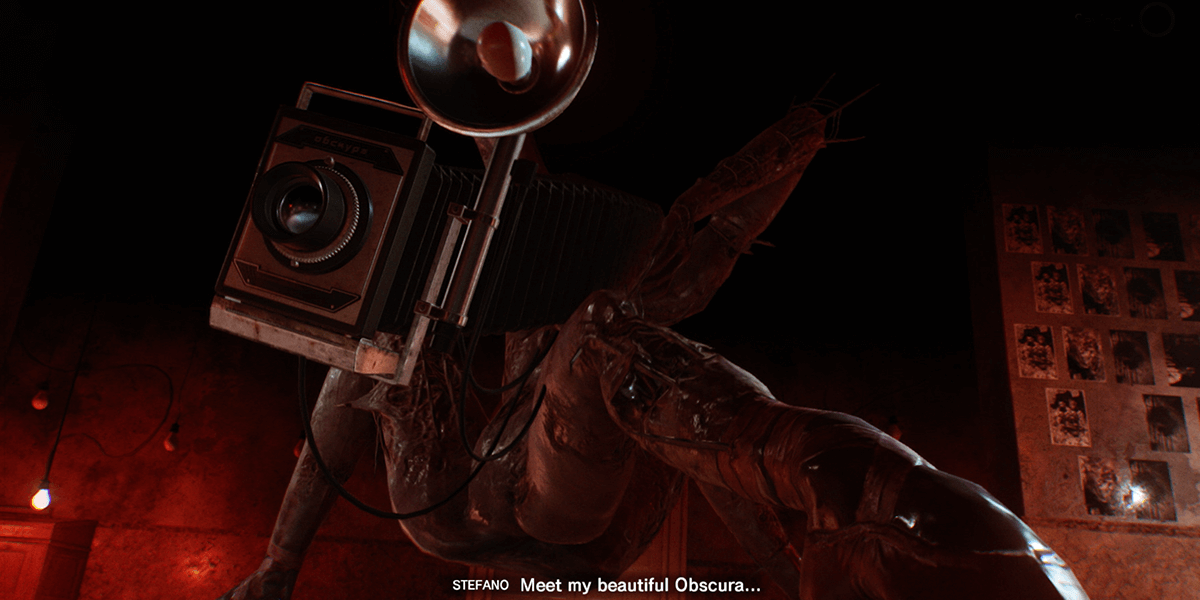 Obscura has the grace of a ballerina, a zombie’s skin, and a camera in place of its head. You’ll face this monster during chapter 5 and chapter 7 — Stefano created her, and it’s believed to be his ultimate masterpiece.

This creature attacks with its camera head and will stun Sebastian with her flash. She can also stop time, stopping the 90-second countdown from the Emitter during chapter 5.

The first time you fight Obscura, don’t try to kill it — your job here is to let the countdown get to zero. To fight Obscura’s time-stopping abilities, go for her weak spot, the camera. The second time you fight her, you can either choose to sneak past her or go ahead and try to kill her, which will grant the player 7000 Green Gels. 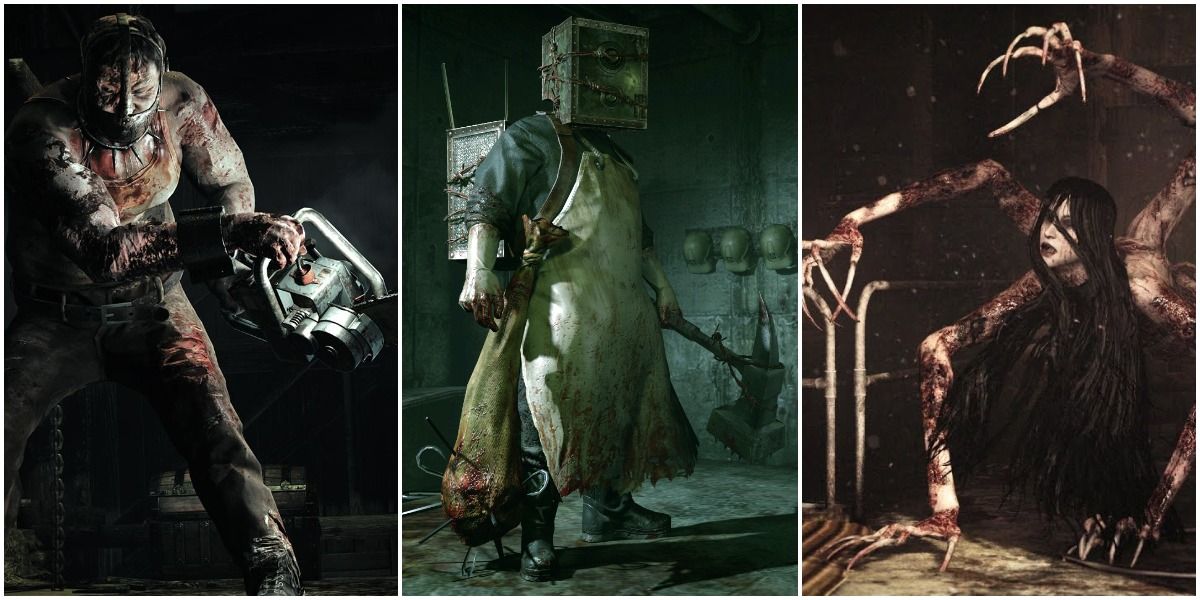 Theodore is the game’s main antagonist, so you better bet his boss fight will be a tough one. This particular enemy won’t fight you directly; instead, Theodore will summon three bosses from the previous game — a fitting strategy for a cult leader.

This fight will happen during chapter 14, so brace yourself. The first boss that’ll come back is The Sadist, a huge man covered in blood wielding a large chainsaw as his main weapon. Like the first game, you must outrun this boss and not get caught in its one-hit kill.

Next up is The Keeper, a tall humanoid-like man that has a safe instead of a head. His chosen weapon is a meat tenderizer, which he’ll use to… well, tenderize you in a most violent manner. This enemy relies on strong blows, so it’s wise to use long-range weapons against him. Also, The Keeper bangs on its head whenever he spots Sebastian, take that as a cue that he’s about to attack. Keep in mind that this phase of the boss fight will have you fighting not one but three Keepers.

Finally, it’s Laura‘s time to shine. She will gracefully come out of the Keeper’s safe-head, and the final phase of the boss fight will begin. To eliminate this spider-lady, you must open the valves to power up the incinerator. However, this takes time, so in the meantime, use freeze bolts to slow down the monster. 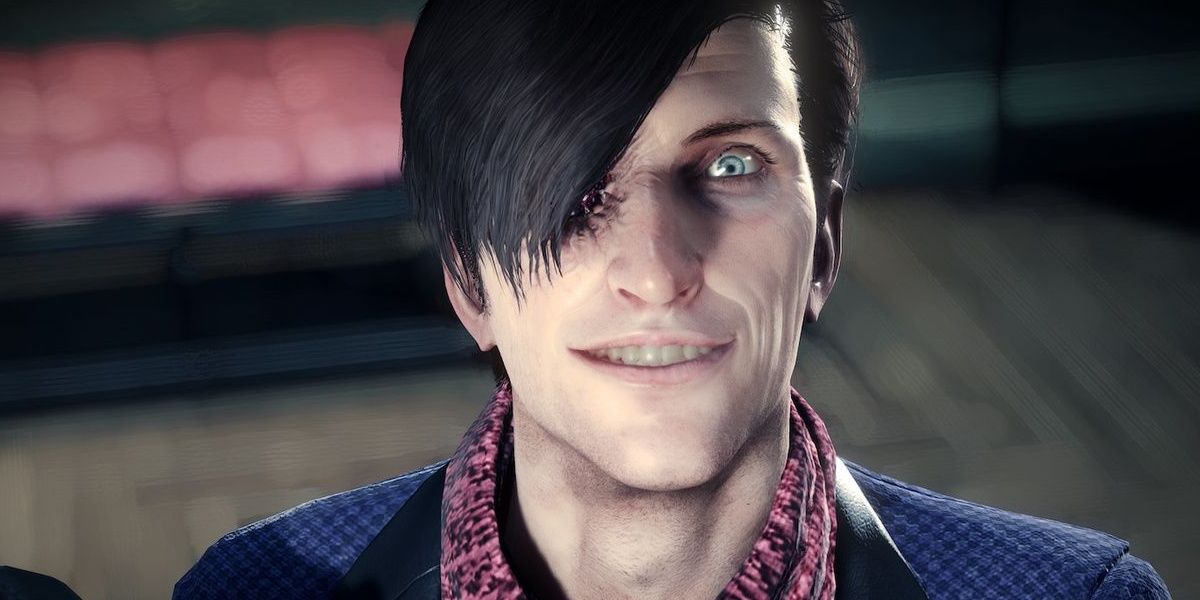 Stefano is a twisted person, corrupted by his obsession with finding the beauty in death. He was once a war photographer who lost an eye but gained a new fascination with killing people and converting them into “art.”

While Stefano appears throughout the game, his boss fight takes place during chapter 8. He has numerous attacks he can use against Sebastian, like:

There are a few tricks when it comes to defeating him. For example, paying attention to what he is saying will help you a lot. It turns out Stefano’s quotes will give you a clue about what kind of attack he will perform. 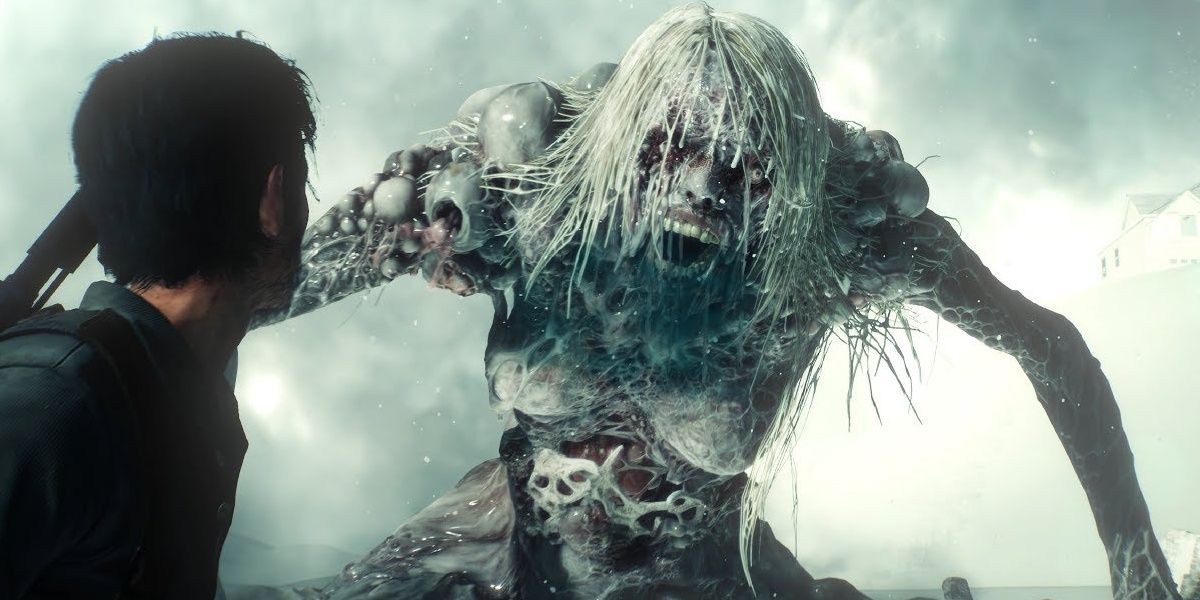 This one is the final boss in the game — she looks human enough, but her body and face are very deformed. You’ll encounter the Matriarch during chapter 16, and while the fight consists of four phases, each one has the same objective: shoot the glowing parts.

Use a long-range weapon, like an upgraded Assault Rifle, for this fight and go for the weak spots (the stomach, the two shoulders, and the mouth).

NEXT: The Evil Within 2: 10 Mistakes Most Players Make On Their First Playthrough 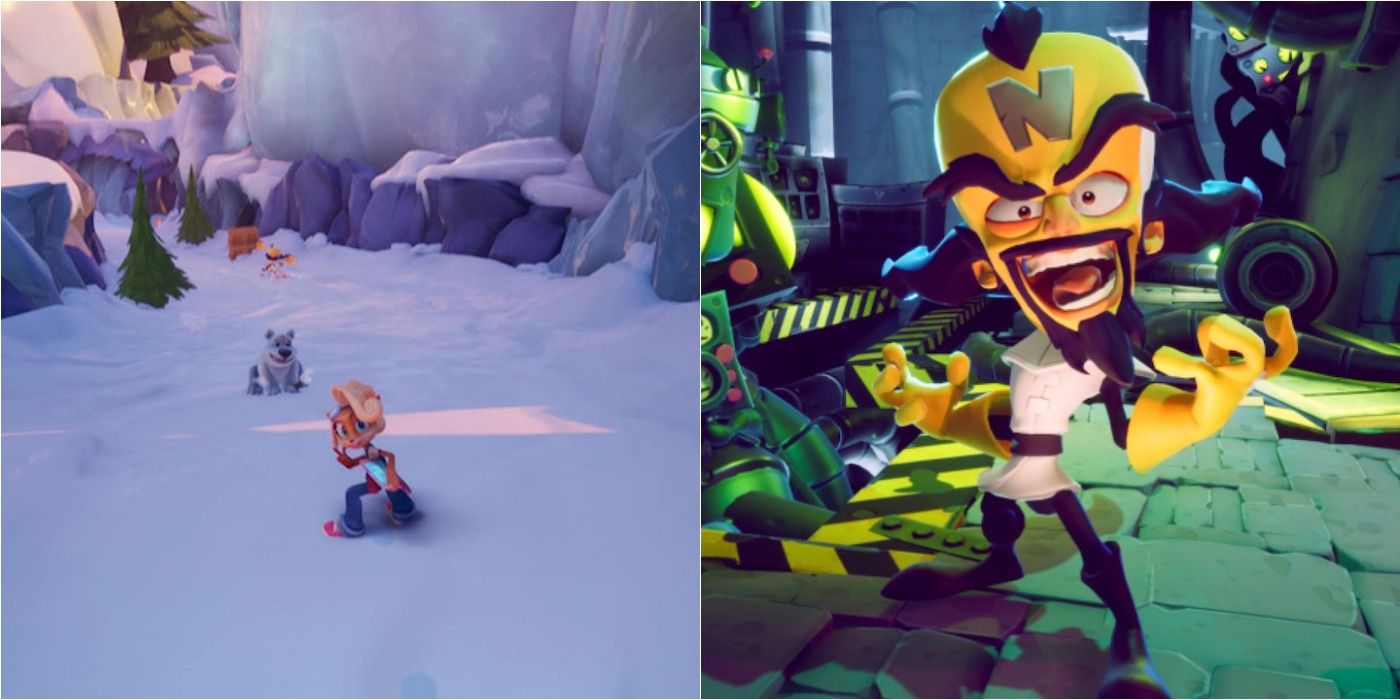