You are here:
Home / The Eight Best Staves In Elden Ring

Builds focused around sorceries are among the most powerful in Elden Ring. When properly optimized, they can trivialize some of the game's most difficult bosses. And if you’re going to cast sorceries, you’ll need a staff. You’ll come across many as you travel the Lands Between, but some are substantially more useful than others.

The reason for these differences varies; perhaps they buff a particularly useful type of spell, or simply have extremely high damage. Regardless, there's no question that not all staves are equally viable. Here are some you should consider using during your next playthrough. 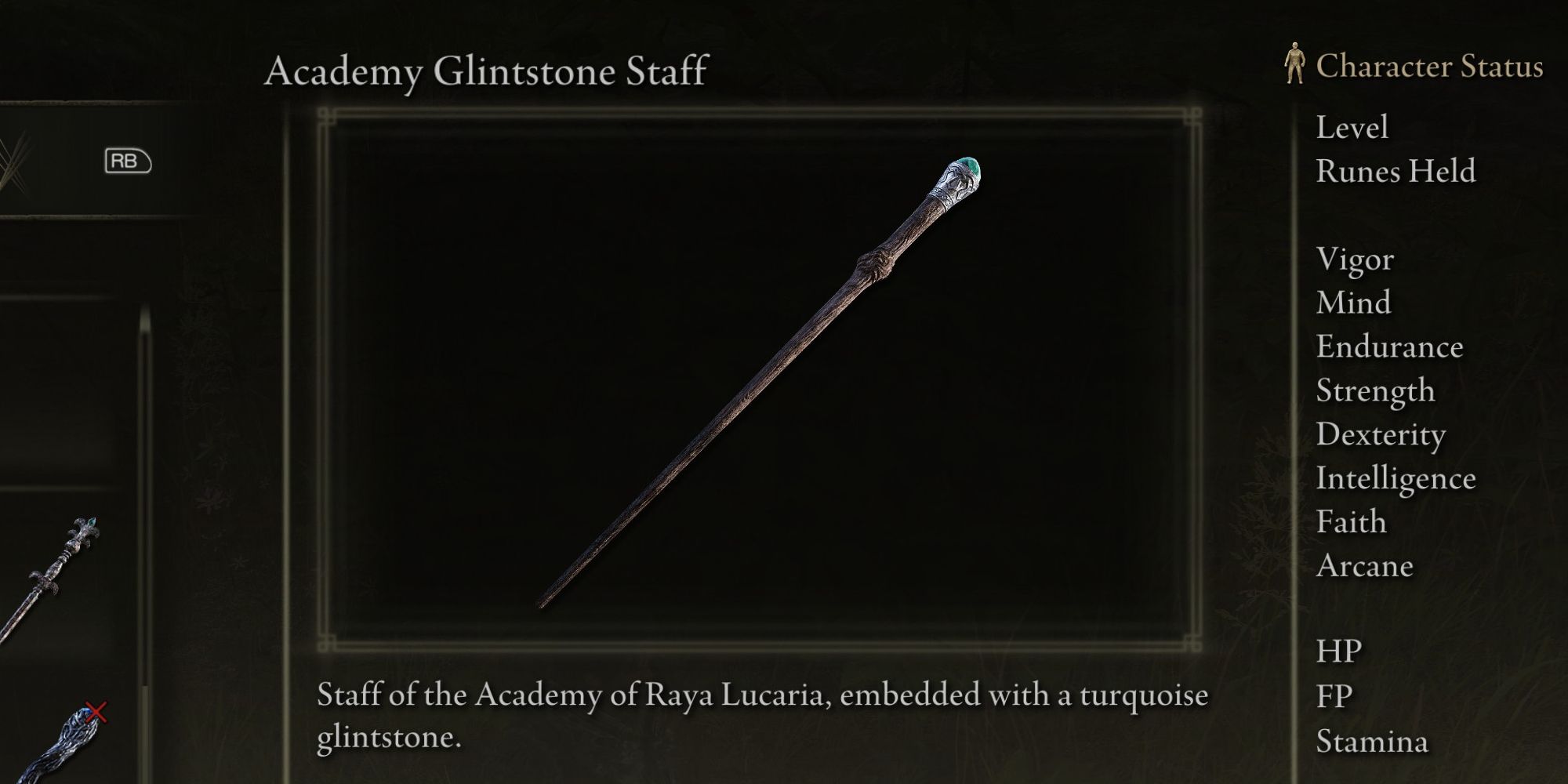 The Academy Glintstone Staff is a fairly niche weapon, but in a certain, specific scenario, it's among the best in the game. A fully upgraded Academy Glintstone Staff will deal more damage than any other between 41 and 68 Intelligence. It probably won’t be your main weapon during your entire playthrough, since if you are reaching 68 Intelligence you are probably going all the way to the soft-cap at 80.

Still, this staff can be a helpful stopgap to get you through the mid-game. You’ll have to put in some work to get it, though. Unlike most of other staves on this list, you can’t just pick it up off a corpse somewhere. Your first option is finishing Thops’ questline. You can also get the staff by farming the exceptionally irritating Glintstone Sorcerers that populate the Academy of Raya Lucaria. 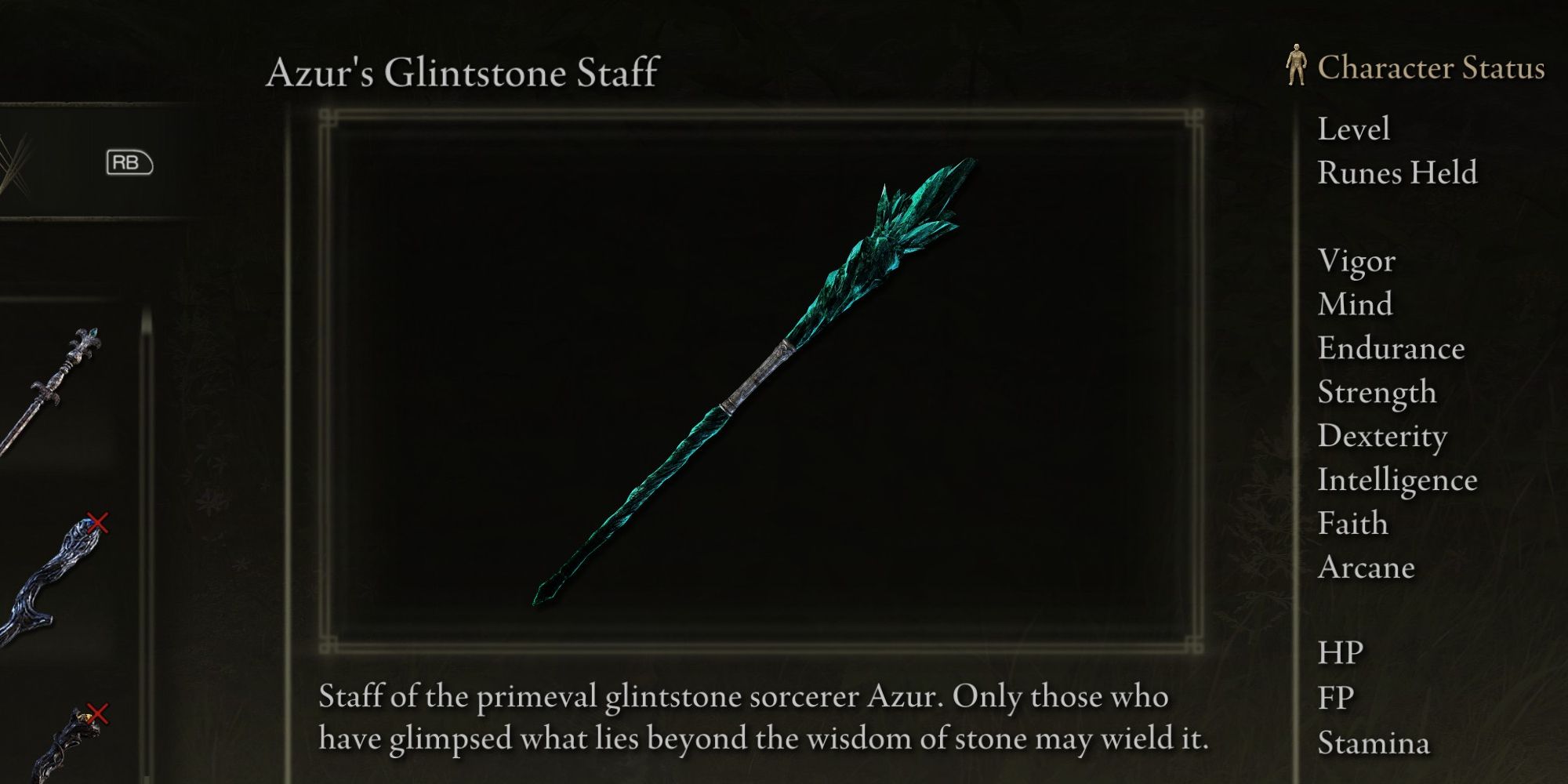 The staff once belonging to the legendary sorcerer Azur is one of the more unique staves in the game. It’s not the most powerful, but it has a rare property: it reduces the casting time of both Sorceries and Incantations by around eight percent and increases the cost of all your Sorceries by around 20 percent. It is also outclassed by many other staves in terms of damage, so the tradeoff might not seem favorable. However, you can take advantage of a holdover from the Dark Souls games: a staff held in your off-hand still triggers its buffs but, not its debuffs, even if you aren’t using it to cast spells.

If you want to sling spells with speed, Azur’s Glintsone Staff is located in the Academy of Raya Lucaria , in the room with the crystals and the dormant School of Graven Mages. 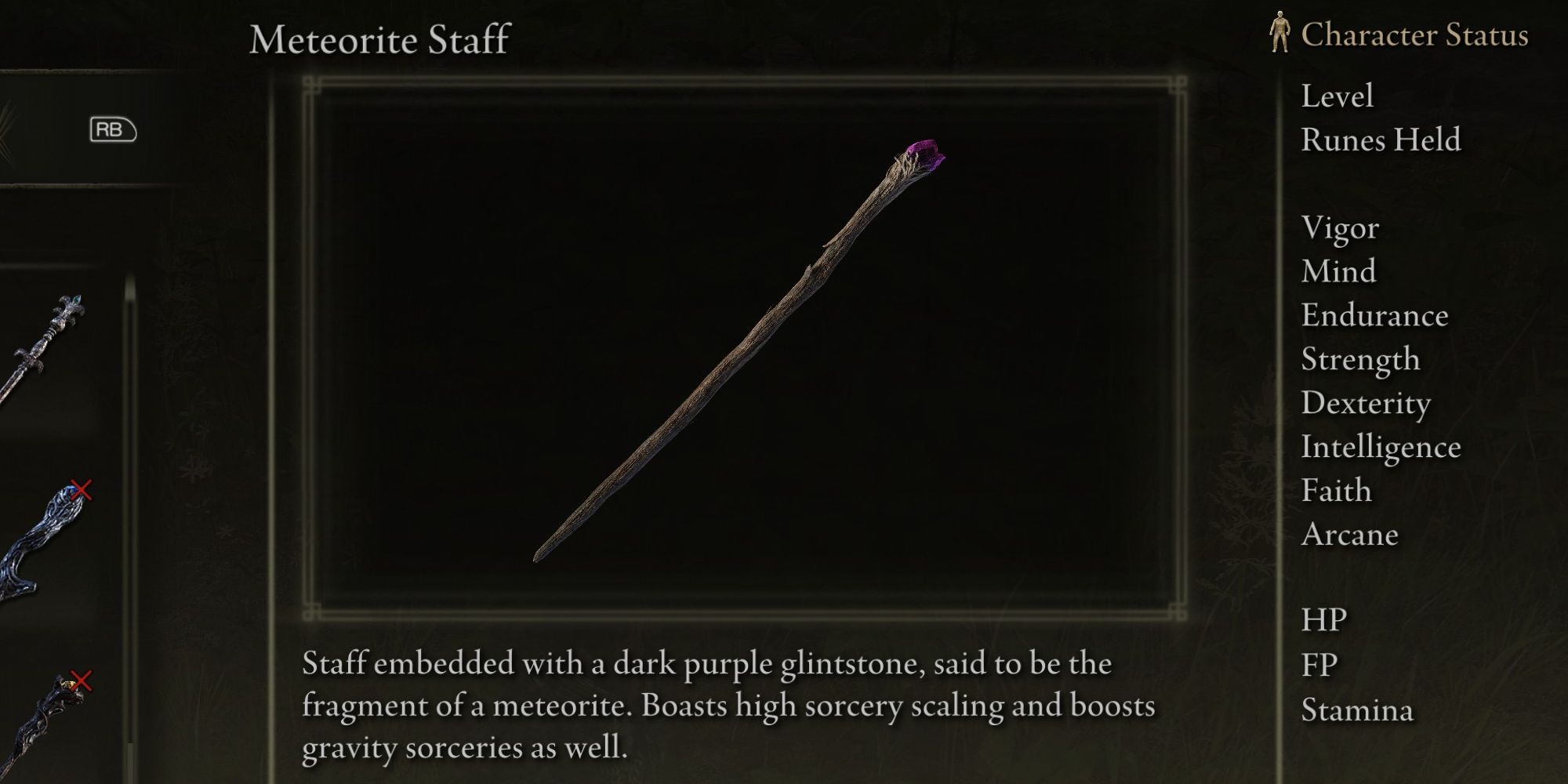 The Meteorite Staff is unique in that it can’t be upgraded at all. Normally, that would make it completely useless. However, its base scaling is exceptional. It's easily the best staff in the early game. And conveniently, it can be accessed almost right away by going to the Street of Sages Ruins in Caelid. Braving Caelid is a daunting task for a new player, but the Meteorite staff is a worthwhile reward, even if you need to make a suicide run to get it.

It’s worth noting that the Meteorite Staff isn’t completely useless in the late game either, since it boosts Gravity Sorceries by 30 percent. These Sorceries, Rock Sling in particular, are among the better options in the game. If you’re planning on focusing your build around them, holding the Meteorite Staff in your off-hand will give you a substantial boost. 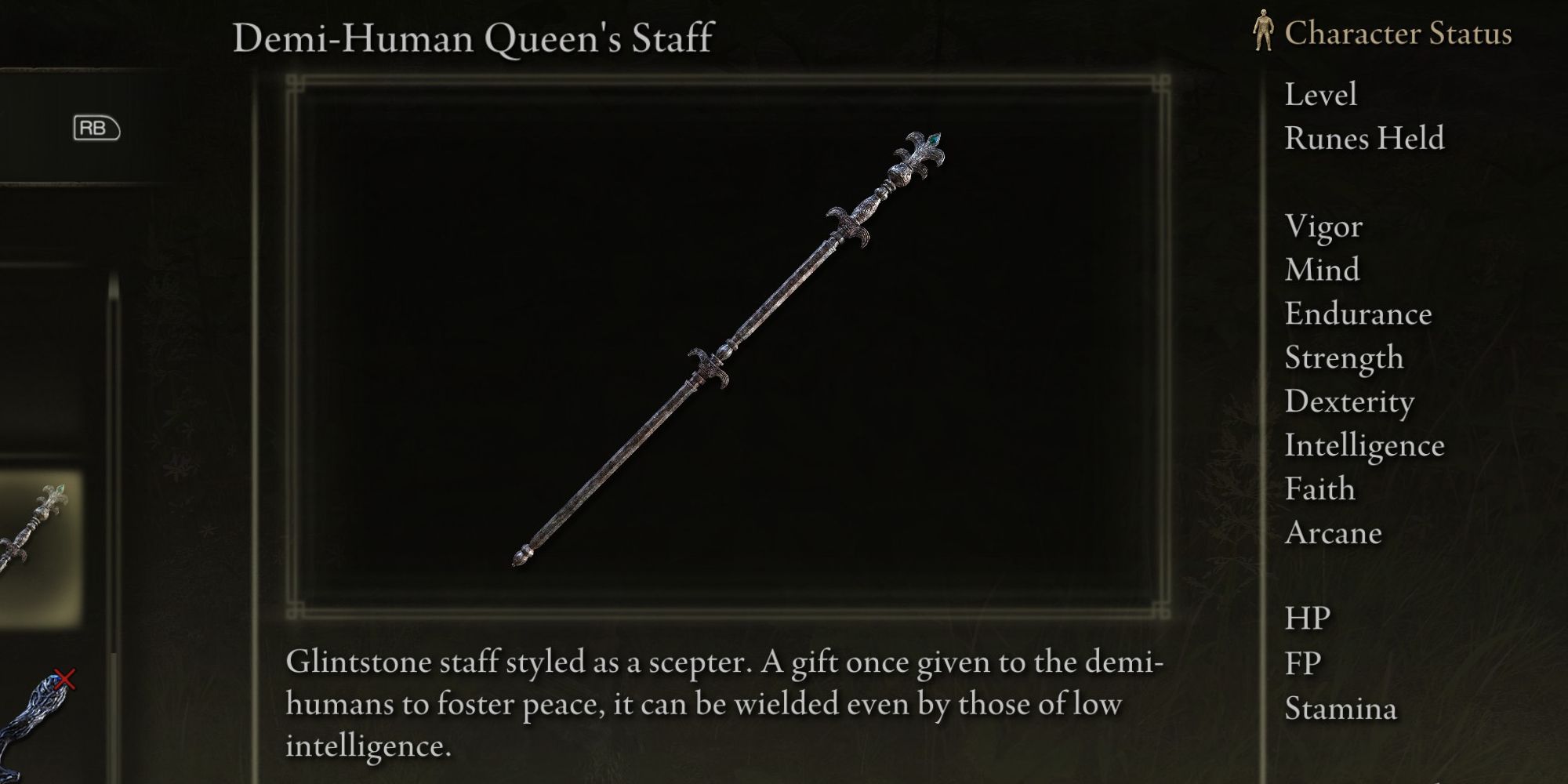 The Demi-Human Queen’s Staff is perfect for players who just want to dip their toes into casting Sorceries. Maybe you want to play a strength-focused character who uses spells for those hard-to-reach flying enemies. If you plan on staying at 40 Intelligence or below, this staff will do the most damage when fully upgraded. The Meteorite Staff is better in the early game, but if you are playing relatively low-Intelligence character in the late-game, the Demi-Human Queen’s Staff is where you should turn. 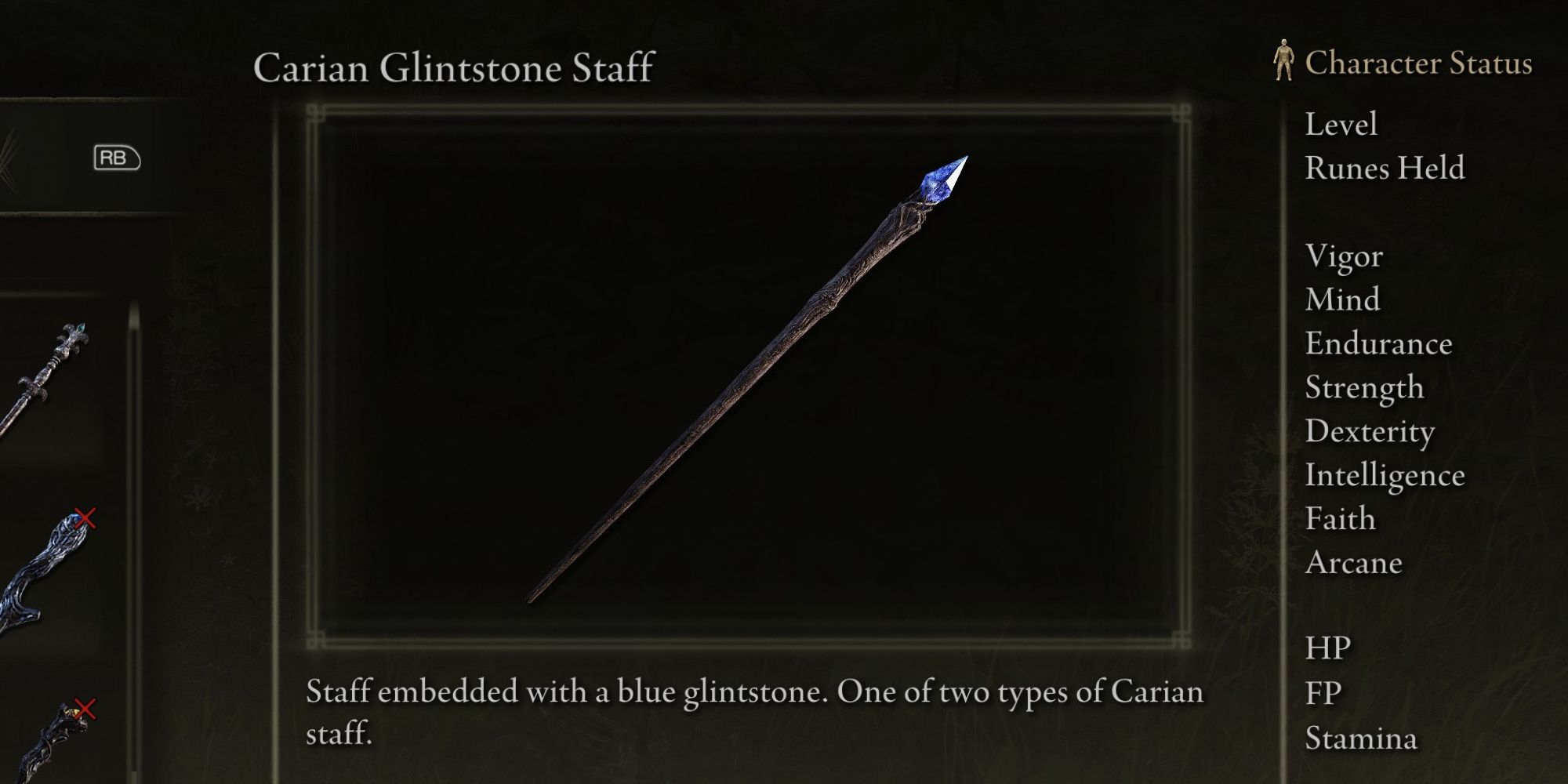 Do you think swords are cool, but wish they were made of magic instead of metal or stone? Well, do I have the staff for you! The Carian Glintstone Staff buffs Sword Sorceries (basically anything that makes a sword appear on the end of your staff) by 15 percent. Note that it doesn’t buff Glintblade Sorceries, the ones that create floating swords. You’ll need the aptly named Carian Glintblade Staff for that.

Builds based around these Sword Sorceries can deal surprisingly effective damage, and the Carian Glintstone Staff is often a key component in making them run smoothly. You can find it in the Carian Study Hall, right before the second elevator. 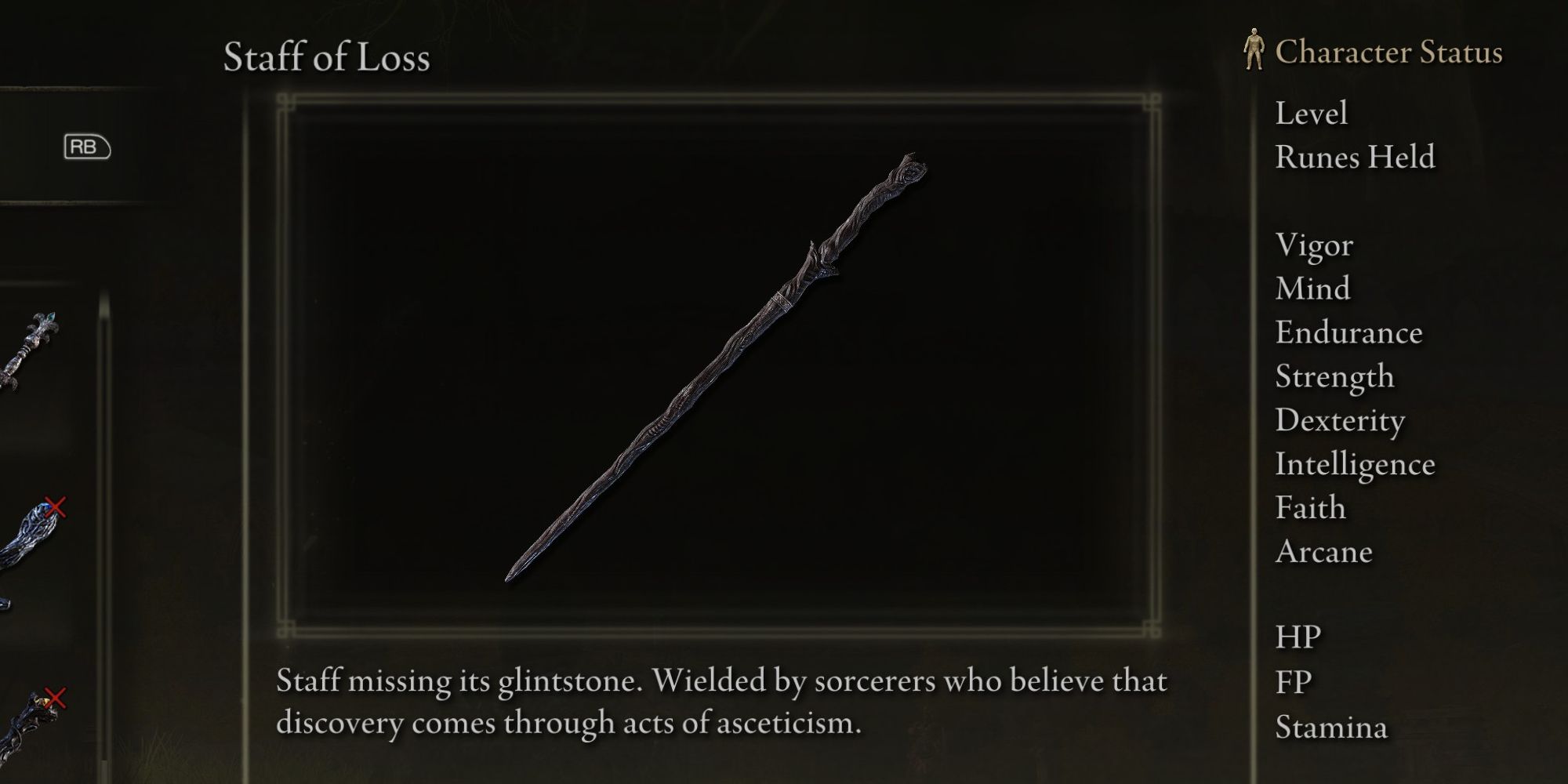 Unlike most of the other staves on this list, the Staff of Loss’ power has little to do with its base spell scaling. Instead, its excellence comes from its secondary ability: it boosts Invisibility Sorceries by 30 percent. It only affects two spells: Night Shard and Night Comet. But it turns out that those spells are exceptionally useful.

NPC invaders and some of the more annoying bosses won’t dodge these spells, making them one of the most effective options against such enemies. This strategy becomes even more effective in New Game Plus, when you can grab a second Staff of Loss, giving your Invisibility Sorceries a 60 percent boost. You can loot the Staff of Loss from a corpse on the rooftops of Sellia, Town of Sorcery. 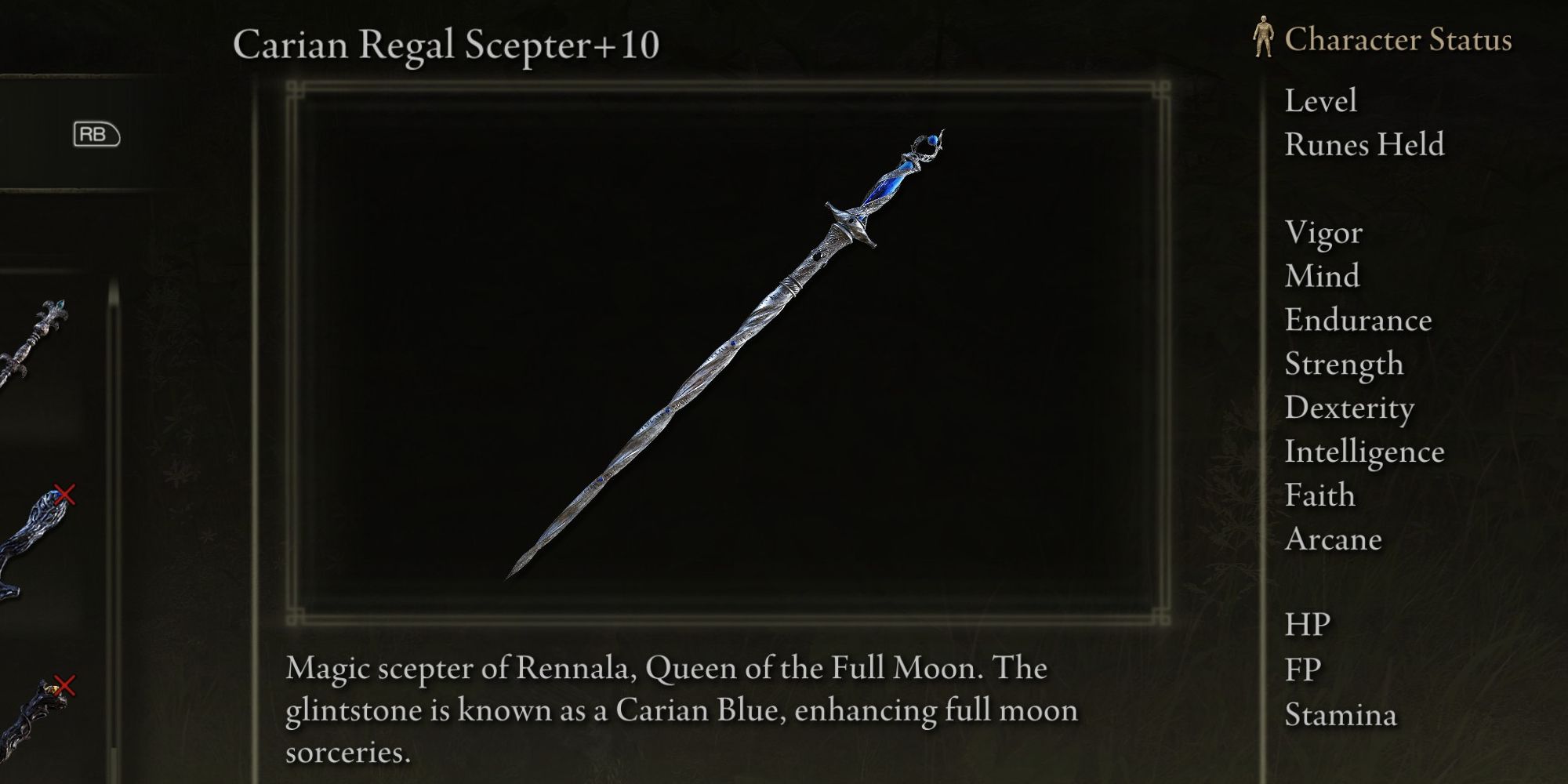 At high levels of Intelligence, the Carian Regal Scepter will deal more damage than any other staff without some drawback. It also boosts Full Moon Sorceries and has a unique Ash of War. Neither of those are game-changing, but they're still a nice bonus on an already exceptionally powerful staff.

If you just want power without worrying too much about extra buffs and debuffs, this is the staff for you. You can pick up the Carian Regal Scepter early in the game by defeating Rennala, Queen of the Full Moon, in the Academy of Raya Lucaria, and trading her Remembrance to Enia in the Roundtable Hold. 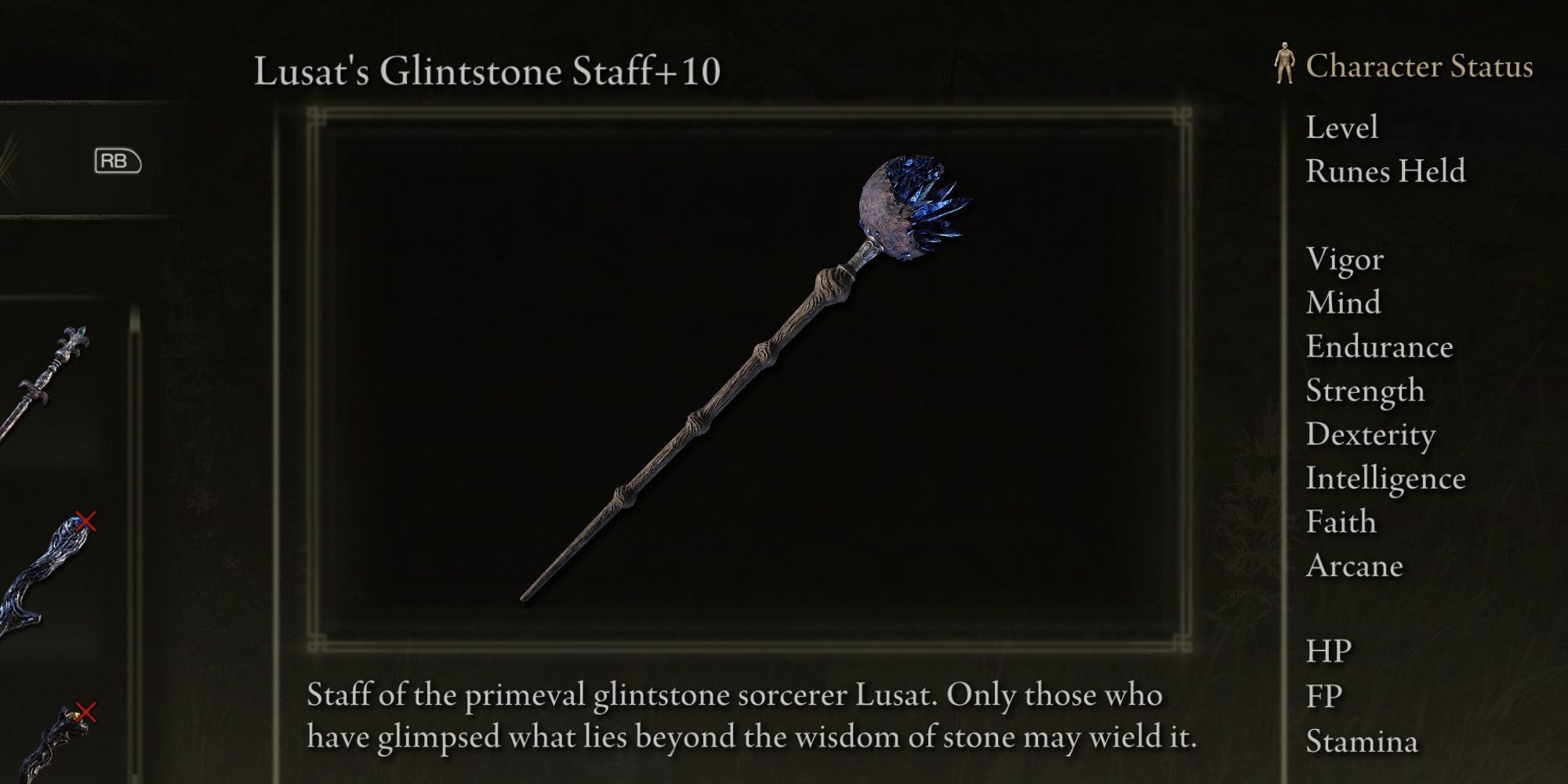 After returning to Sellia, Town of Sorcery one last time and killing the area’s boss, the Nox Swordtress and Nox Priest, you’ll find a chest. Inside is the most powerful staff in the game: Lusat’s Glintstone Staff. Assuming Intelligence is the only damage-based statistic you are investing in, it will outpace all other staves in the game in terms of damage.

Like the Azur Glintstone staff, it causes all Sorceries to cost more FP, although the increase is even more dramatic at 50 percent. However, because you’ll be dealing substantially more damage, Lusat’s Glintstone Staff is worth using if you are willing to invest the levels into Mind and boost your FP. Of course, if you’re using the Cerulean Hidden Tear in your Flask of Wonderous Physick, which eliminates all FP consumption for 15 seconds, the added cost doesn’t matter at all.

Overall, while it may not be not as efficient as the Carian Regal Scepter, if all you’re looking for is raw damage output, Lusat’s Glintstone Staff is king.