You are here:
Home / The Dark Pictures Anthology: The Devil In Me – Plot, Explained

The Dark Pictures Anthology: The Devil In Me – Plot, Explained

In The Dark Pictures Anthology: The Devil In Me, a serial killer seeks to replicate the heinous acts of America's first mass murderer, HH Holmes. You play as five members of an independent film crew who, after being lured to the remote hotel by a mysterious benefactor, find themselves fighting for their lives against a silent figure who stalks their every move.

As the story unravels, you'll have to make crucial choices in a split second that could have grave consequences. We've pieced together the plot for you in case you missed any gory details.

This article contains major spoilers for The Devil In Me.

Prelude: Who Was HH Holmes? 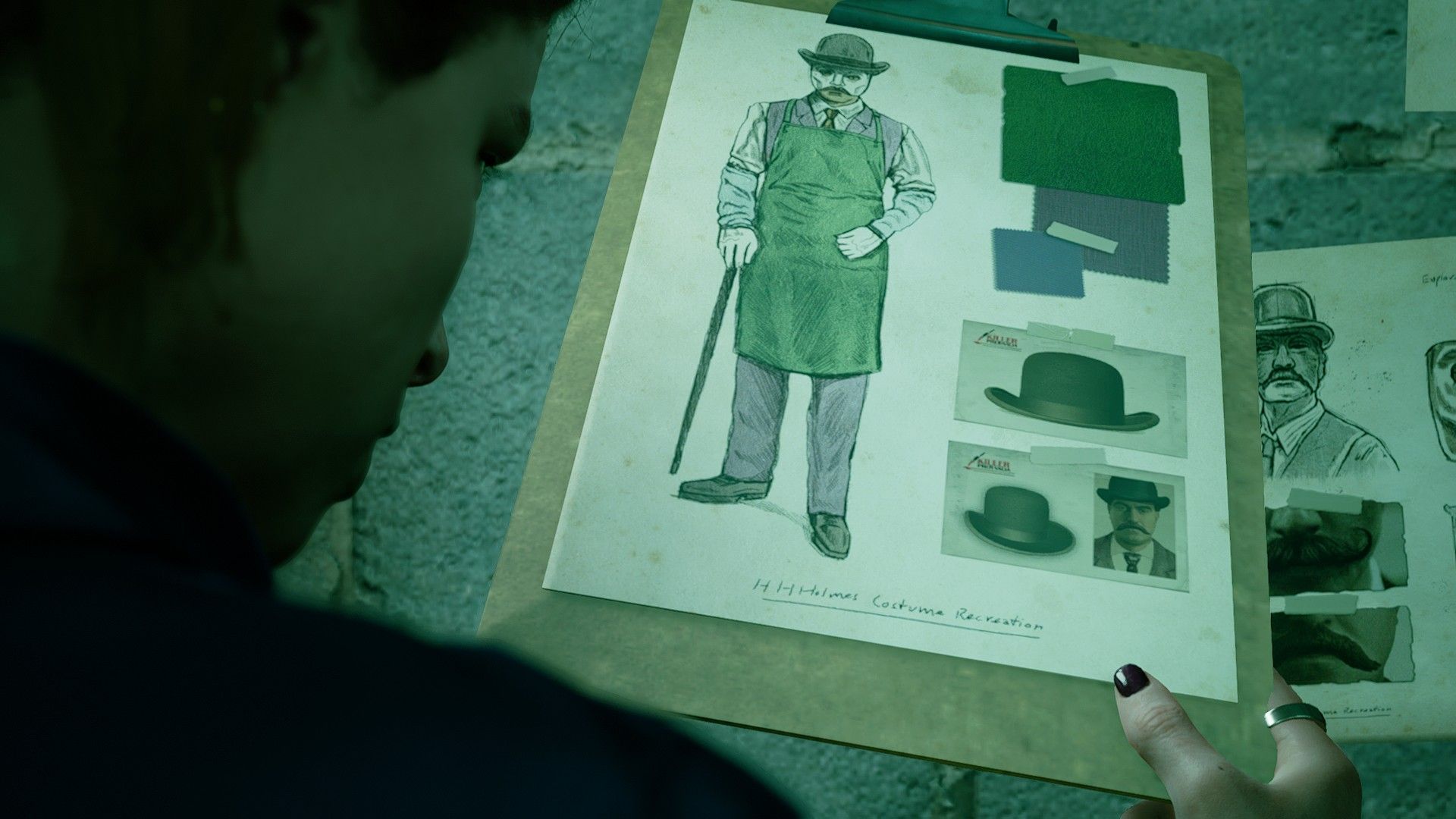 Put simply, HH Holmes was the owner and architect of The World's Fair Hotel. He used it to lure unsuspecting victims into a lethal game of cat and mouse, littering the property with secret tunnels and traps to ensnare his prey and ensure a bloody, violent end.

We meet him in the opening scene of the game, where honeymooning couple Jeff and Marie Whitman check in for their celebratory stay at The World's Fair Hotel. They both fall prey to Holmes' games, with Marie either being drowned in the bathtub or having her throat slashed. Jeff puts up something of a fight before he is locked in a gas chamber and slowly chokes to death on his own blood.

The prologue ends with Holmes standing trial for his crimes. His explanation for the crimes is simple: "I have the Devil in me." He then warns the horrified jury that death won't stop his murderous rampage, alluding to history being bound to repeat itself one way or another.

The Story Of The Devil In Me 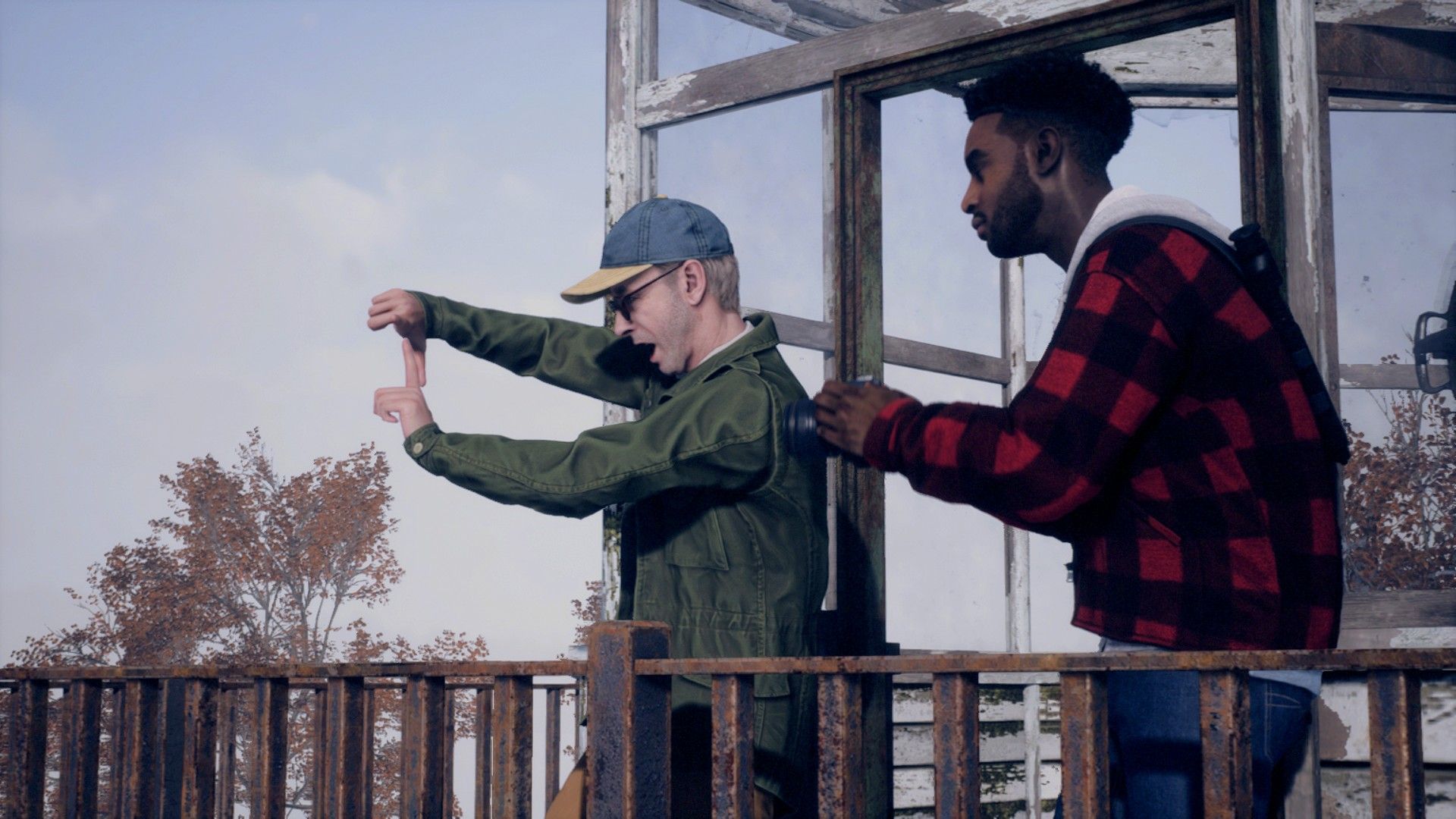 The main story takes place in modern-day America. Having received a phone call inviting them for a visit, Charles Lonnit has dragged his grudging film crew out to Granthem Du'Met's exact replica of The World's Fair Hotel. The team has been producing a true-crime series detailing Holmes' murders, so Charlie sees this as an excellent opportunity for the team to get a first-hand feel for their subject.

After arriving at the remote island, they are met by a very antsy Mr. Du'Met. He quickly reminds them not to include him in any of their camera shots, citing that he values his privacy. This doesn't seem an issue for the crew, who are more interested in catching some unique angles of the hotel itself.

The four crew members — Kate, Mark, Erin, and Jamie — check into their respective rooms. Erin and Jamie have something of a budding romance, but the air feels bitter between recently-split exes Mark and Kate. Charlie's major relationship is with his chronic smoking habit, so he barges in on Erin and Jamie to enlist one of them to help him scrounge up a packet of smokes. 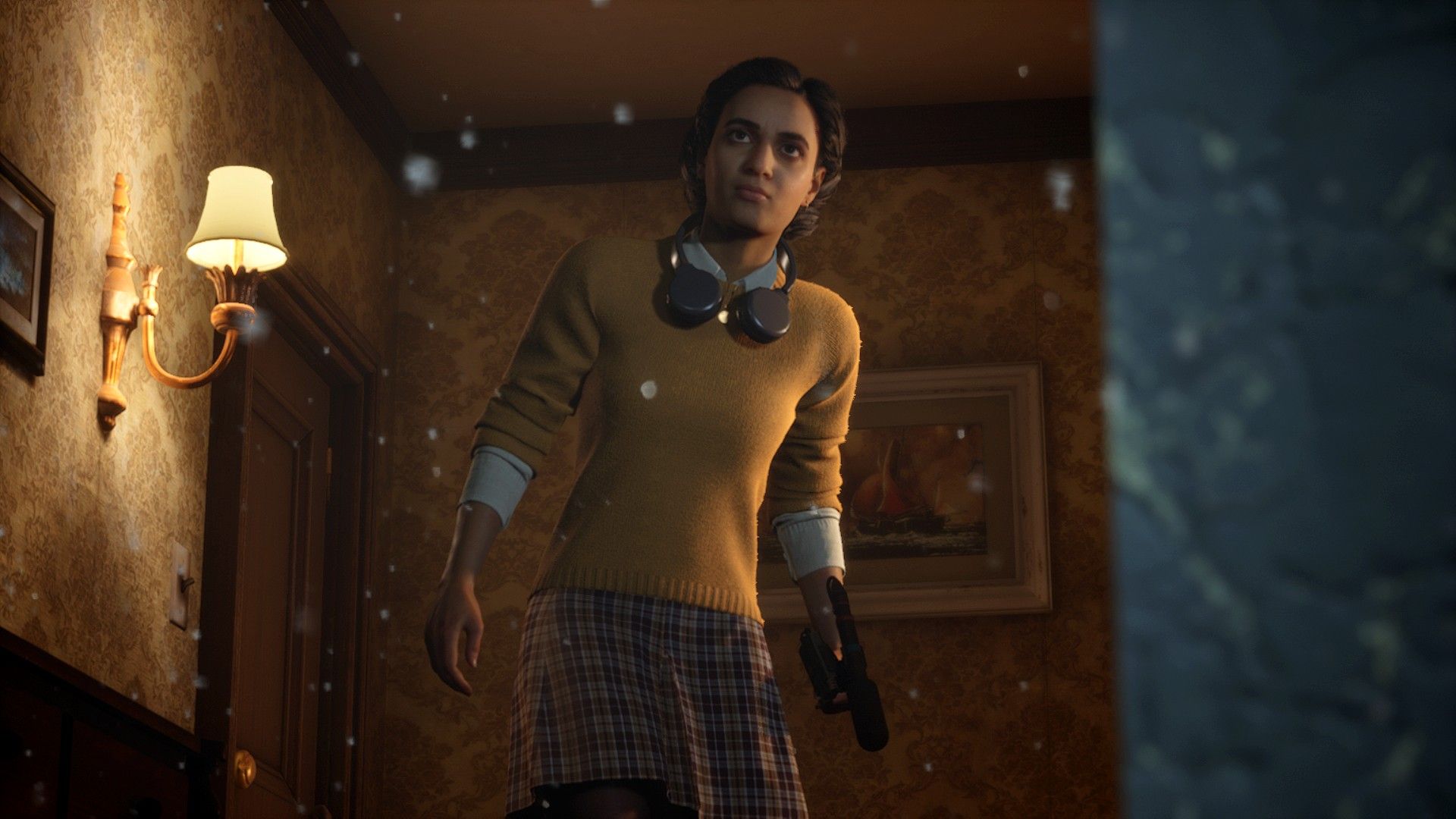 Leaving Jamie with the promise of continuing their discussion later, Erin heads down to the hotel bar with Charlie. A creepy animatronic bartender greets him from behind the dimly-lit counter, but thinking nothing of it, Charlie immediately guns for the one remaining packet of cigarettes wedged tight in the dispenser. Du'Met is trying to faithfully rebuild the hotel, after all, so why wouldn't he construct some lifelike robots to stand in place of the hotel staff? Aside from the yellow-jacketed groundskeeper they've seen shuffling about the hotel grounds, it seems Lonnit Entertainment is totally alone on the island.

The team reconvenes to dine with Mr. Du'Met after Charlie's fruitless attempts to get his cigarettes. When he doesn't show up, the crew tells Charlie that they saw Du'Met quickly getting onto a boat to cross back over to the mainland. Charlie shoots this down as being impossible; why would he abandon his new guests? Still, he decides to make a toast to the team to raise their morale. Charlie says he understands that he's been hard on them, and takes an opportunity to thank them for giving up their planned vacation time to come on this shoot instead.

Something Wicked This Way Comes 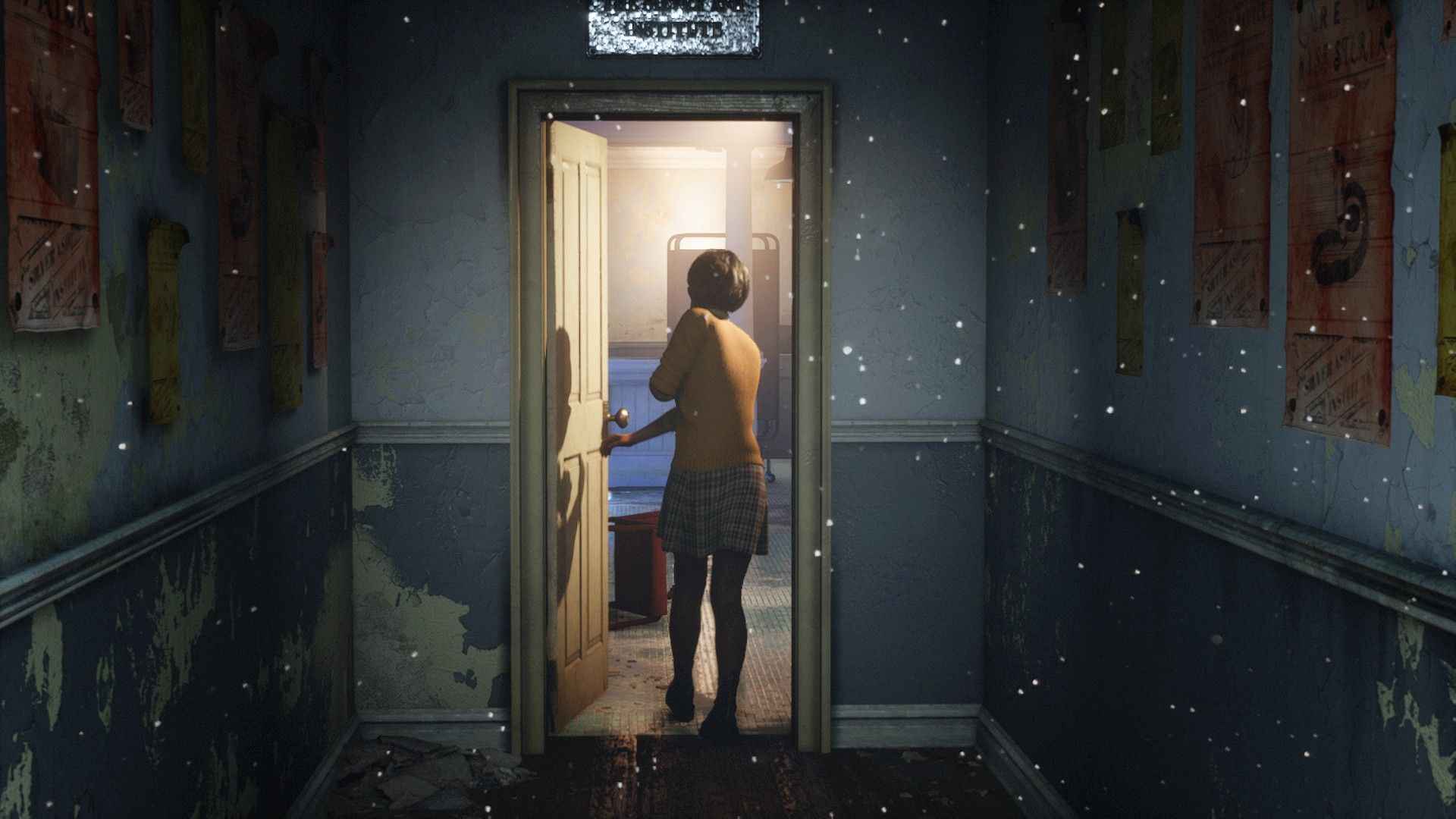 Scrapping their dinner plans in favor of getting a head start on their work, the team returns to their respective rooms to grab some gear. Erin is startled by the sounds of a woman crying somewhere down the corridor, so she takes her microphone with her to find the source of the wailing.

The corridors seem to change as she moves through them, frightening Erin but not assuaging her curiosity. She comes to a door with the placard for The Silver Ash Institute above the awning and slowly creeps inside.

It appears to be some sort of medical bay, with two gruesomely realistic animatronics reenacting a patient vomiting heavily into a bucket before being injected by the masked doctor at his side. 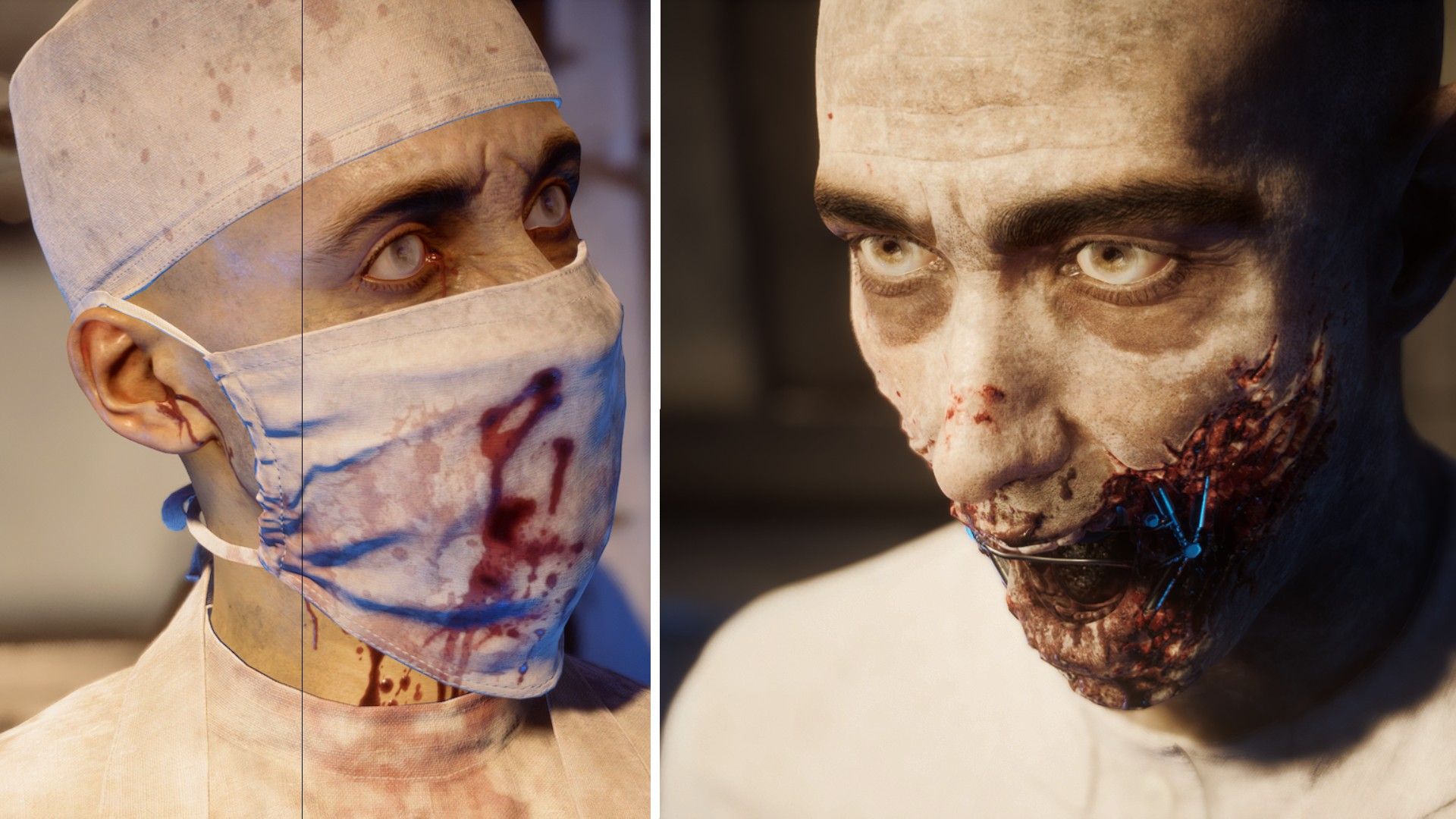 As Erin explores her terrifying new surroundings, she comes across a mobile phone housed in a glass box. It appears to show texts between Jamie and one of her friends, with her friend teasing her for having a crush on Erin. The texts show Jamie quickly brushing her off, saying that Erin is utterly clueless and not the "badass bitch" type she would usually go for.

Just as Erin starts getting angry, a voice speaks to her from somewhere in the room. It's Jamie, and she's telling Erin to quickly hide in the closet in the study behind her. If Erin tries to start in on Jamie for the texts, Jamie tells her that now is not the time for that; she has to hide right now.

If Erin hides in the wardrobe, she lives. If you decide not to listen to the warning, Du'Met surprises her at the doorway and drives her back into the animatronics. She then falls backward over the keeled-over patient and gets stabbed through the eye when the doctor brings down his needle. 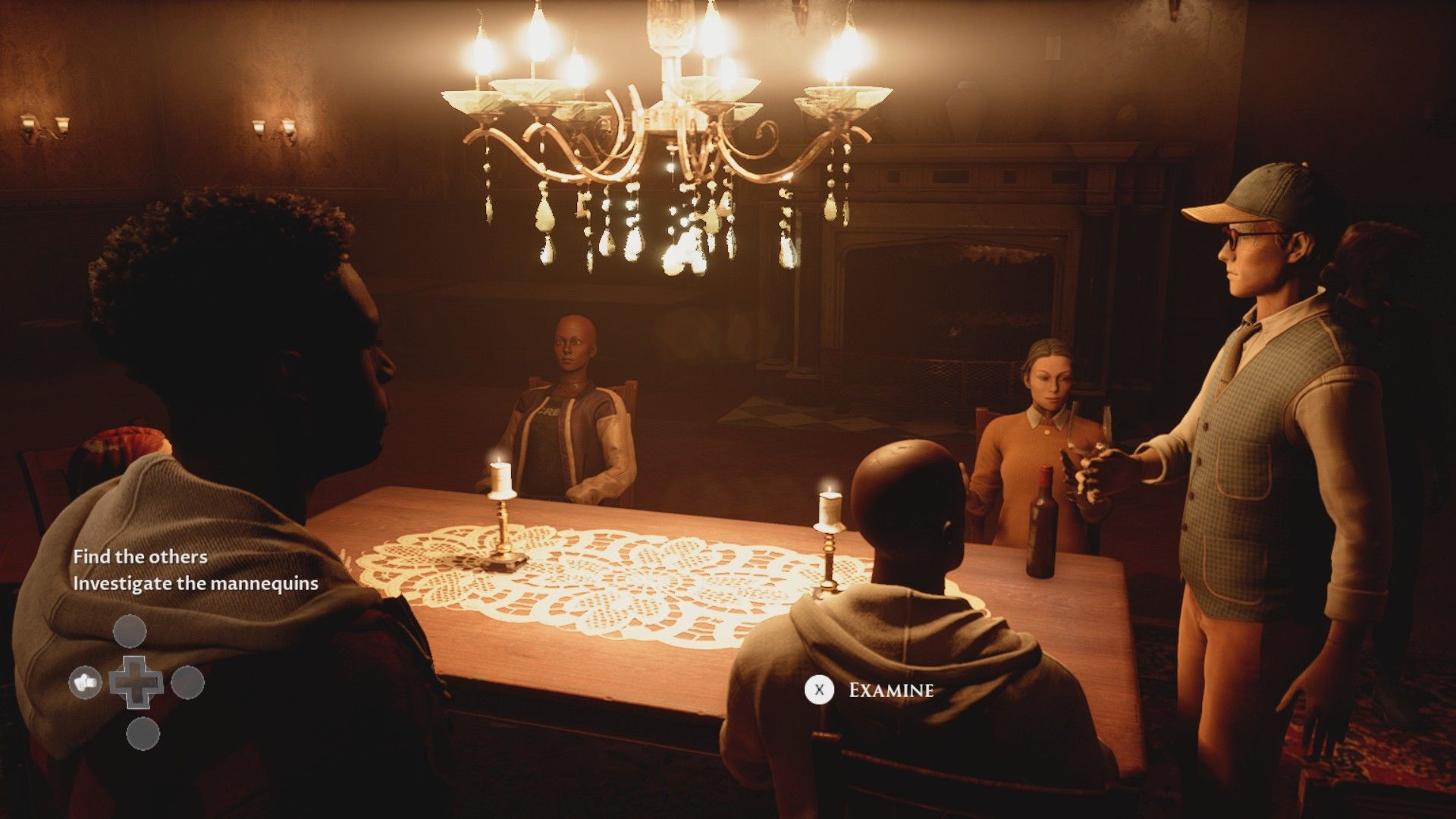 Elsewhere in the hotel, Mark and Kate have stumbled upon a tableau that has been constructed as an exact replica of the meal they have just had as a team. When Jamie accidentally knocks into one of them, a human eye splatters out onto the table. The team now knows they are in imminent danger.

Charlie is still nowhere to be found, having been trapped in a furnace by the masked killer, whose games are finally in full swing. You can choose to save Charlie by crawling beneath the grate or trying to prise open the door, which will ensure his fiery demise.

If Erin finds a doctored tape recording, she becomes convinced that Charlie is the one behind the murders and has set them up to be killed by Du'Met. If she ends up dying in the air chamber trap, she will use her last moments to write a warning in her own blood: 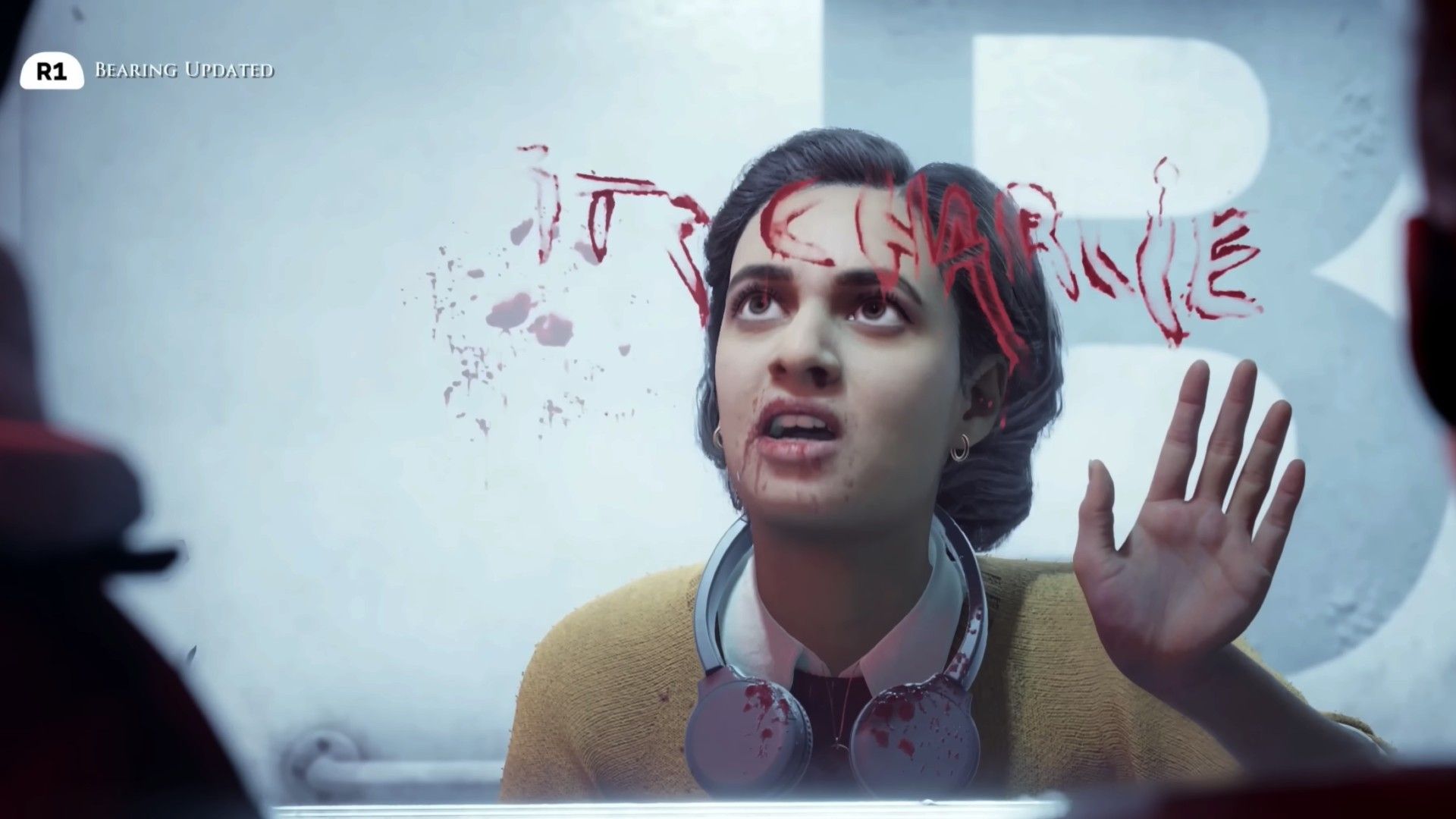 As the team struggles to fight back against their captor, they can die at any point if you don't make some very crucial decisions. From this point on, all the characters are fair game.

Whether your whole team survives or not, the game ends with an image of the HH Holmes mask washed ashore. As a gloved hand reaches down to pick it up, it is suggested that Du'Met never died after all — and his work then continues with five new victims.

Who Is The Killer In The Devil In Me? 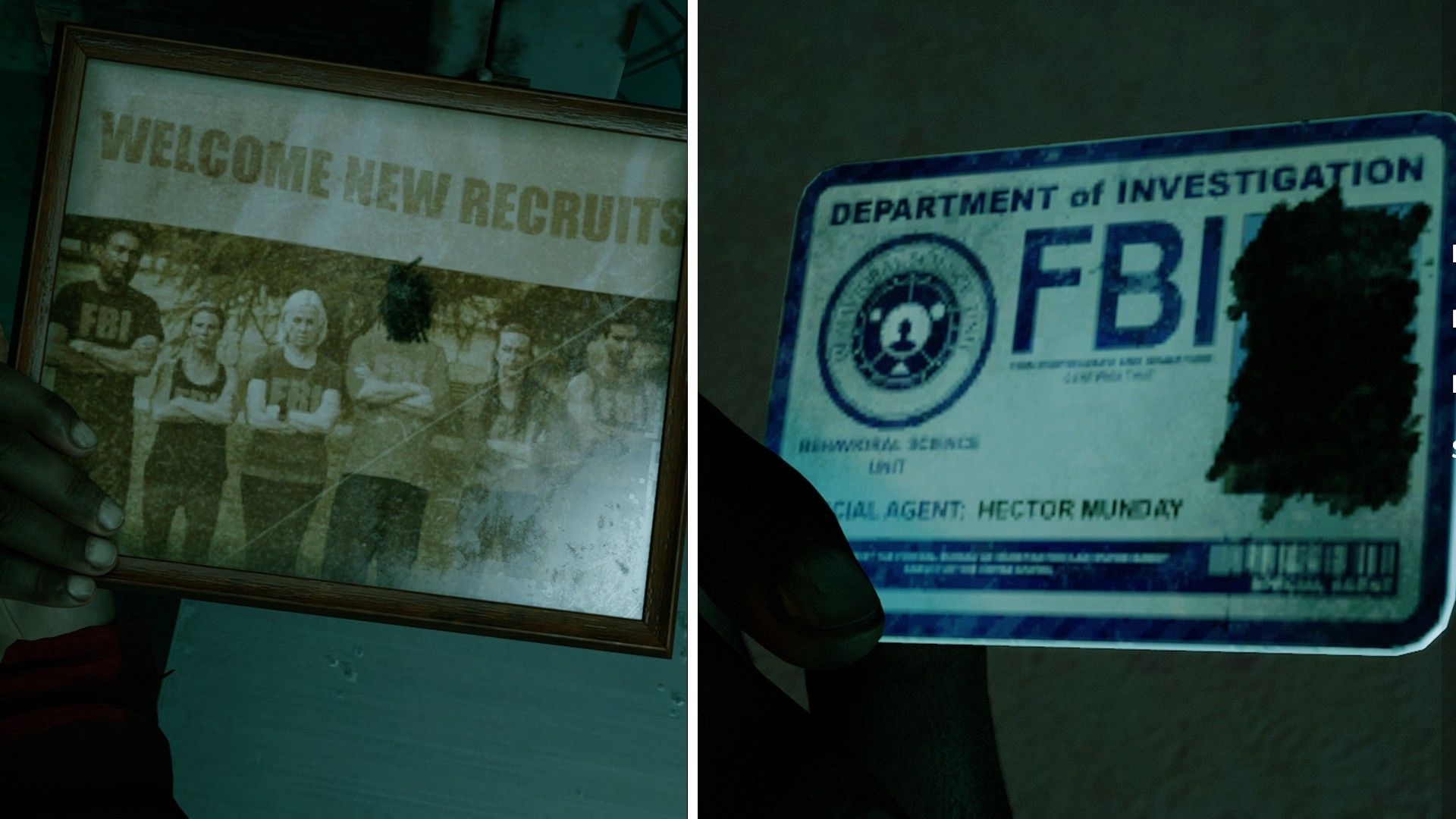 Charlie is innocent. By scouring the hotel for secrets, we find out that Granthem Du'Met is one of many aliases employed by one Agent Hector Munday. Once a behavioral analyst for the FBI, he worked the case of serial killer Manny Sherman: the Beast of Arkansas.

Munday was removed from the FBI following concerns about his mental health, growing increasingly disturbed as he appeared to become obsessed with his investigations. The Silver Ash Institute he constructed in his hotel is suggested to be a replication of the psych ward Munday was held in, which only exacerbated his rapid psychological deterioration.

He is later revealed to be the Shoeshine Killer, murdering four people including police officer Patrick Stanley. He fakes his death in a fire by pulling out his own teeth and implanting them into another corpse, fooling the police into taking dental records as evidence of his death.

The man we were introduced to as Mr. Du'Met when Lonnit Entertainment arrived at the hotel is actually true-crime author Joseph Morello. He was lured to the island with his family to research his own series of books on HH Holmes. Like with past victims of the hotel, Munday murdered and carefully preserved Morello's family to be pulled apart and given a new life among his legion of humanoid animatronics.

If you finish the game with only Mark and Kate alive, it is revealed that Morello was forced to assume the guise of Mr. Du'Met. He was to contact and invite Charlie and his crew to the island, in exchange for his and his daughter's lives. We later see the Morello family's lifeless bodies outside the lighthouse, inferring that Munday never actually let any of his prey go free.

Why Did Hector Munday Become A Killer? 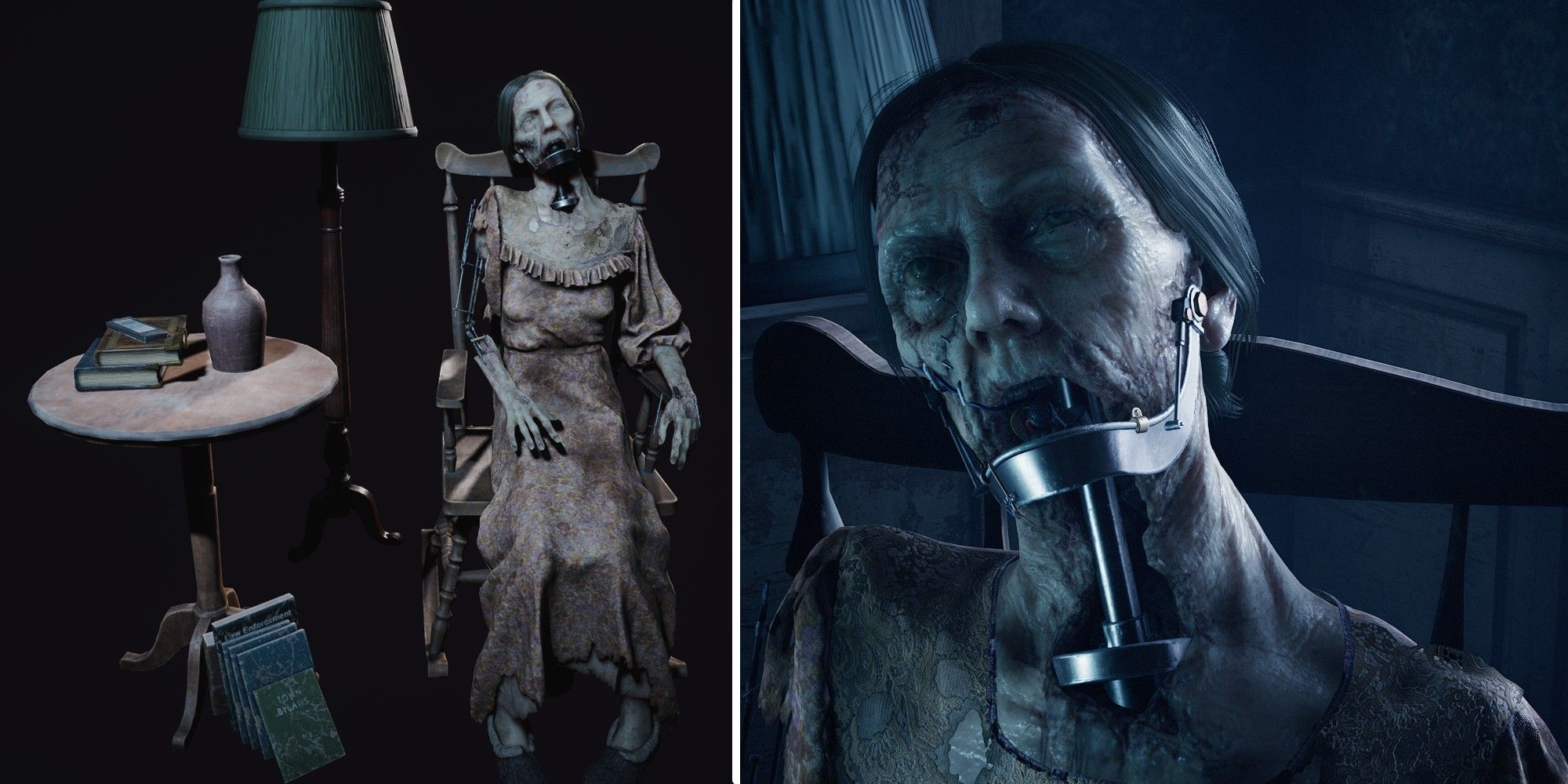 In the time-honored tradition of slasher movies, Hector's emotional disturbance began as a child. His mother was left with an infant after Munday's father, Clarence, abandoned her six months before she gave birth. She resented Hector and the failure he represented, physically abusing him as a child. She was investigated by the CPS for child abuse, as documented in Hector's medical records found strewn about the lighthouse.

Constantly goaded and shamed by his mother, it seems Hector decided to take his revenge by preserving her rotting body and keeping it around as a memento.

After becoming obsessed with serial killers — HH Holmes, in particular — the adult Munday realized that he could use his place in the FBI to commit the murders he was actually investigating.

It is suggested that Munday was one of many serial killers, all going by their own unique names in the press. Now that he is presumed dead once again, he will continue his life of crime under the guise of Granthem Du'Met; it doesn't seem we have a say in that.