You are here:
Home / The Callisto Protocol: Every Gun, Ranked

The Callisto Protocol: Every Gun, Ranked

The Callisto Protocol really helps you keep things in perspective. If being wrongly tossed in prison sounded bad, imagine having to also survive through a horde of mutated space horrors. Such is the predicament of Callisto Protocol’s protagonist Jacob Lee, an incarcerated cargo pilot who finds himself caught in the spiritual successor to Dead Space.

As Jacob, you will need to find your way out of a devastated prison facility, battling against a variety of infected monstrosities. Fortunately, you will have a slew of different weapons to aid in your survival. Knowing the effectiveness of your arsenal is the difference between escape and an unpleasant death in Black Iron Prison. 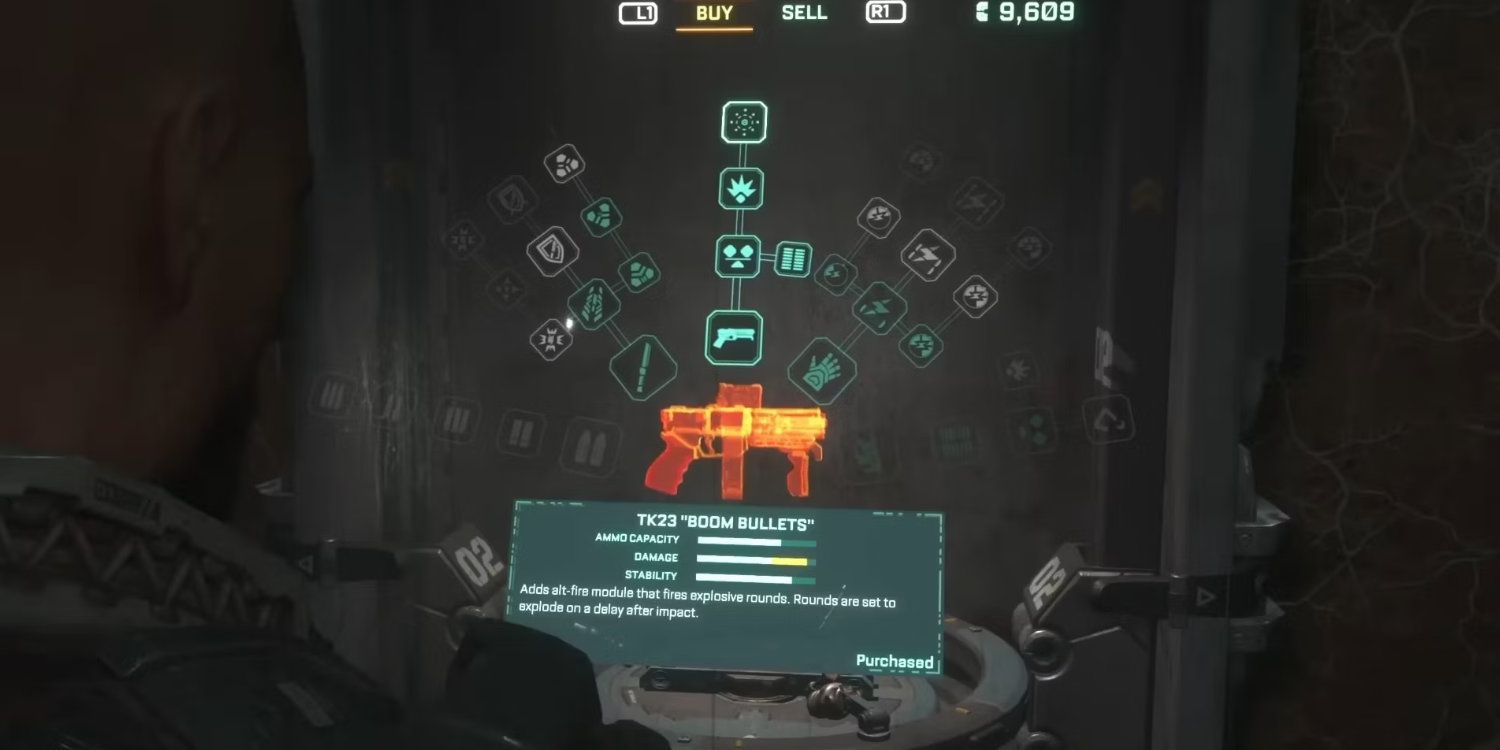 The Hand Cannon is the first gun you will be able to use. You will receive a schematic for it early on in the game and will need to print it at a Reforge Station. For a basic weapon, the hand cannon can be quite powerful. Each shot packs a punch and can blast holes through infected foes with ease. Remember that this pistol is a single-fire weapon, so make sure each of your shots counts.

Depending on the upgrades that you choose, the Hand Cannon can be used well into the story. A High Capacity Magazine upgrade will increase the ammo capacity of the weapon. However, the TK23 Boom Bullet upgrade is where the real fun is. This upgrade will add an alternate fire that shoots explosive rounds on a small delay. Fill up an enemy with TK23 rounds and watch the ensuing fireworks. Out of all the guns you’ll acquire, you will likely find that the hand cannon is the weapon you will use the most due to its reliability. 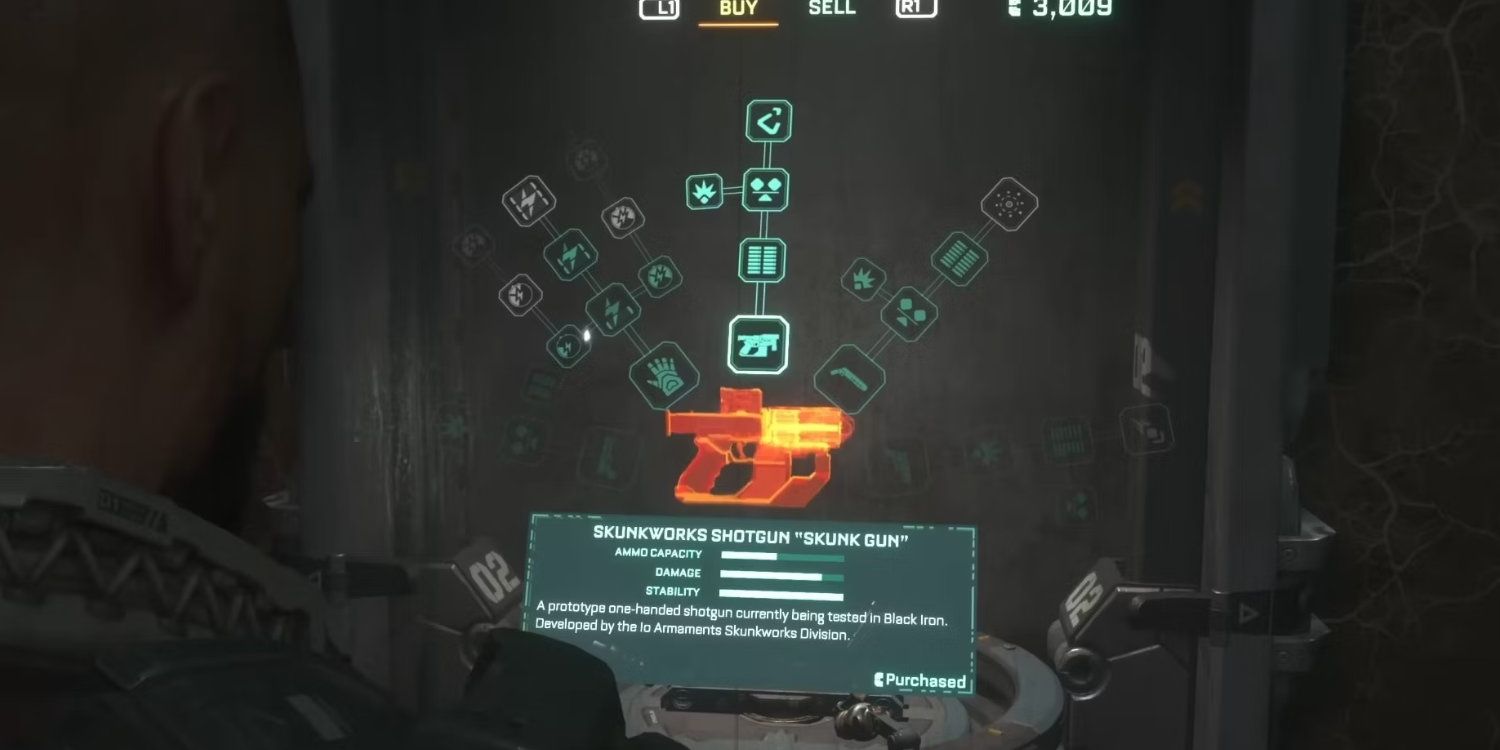 This one-handed prototype shotgun is the first of the beefier weapons you will obtain. The schematic for it can be found in Workshop 0302, and you will need to crawl through a vent in the “Aftermath” chapter to reach it. The bullets from this weapon are fired in small clusters and can hit real hard. It is a very powerful sidearm that can shred through mutating enemies that appear in later stages of the game. Unfortunately, it is held back by a small ammo capacity that demands a bit of precision.

Like the hand cannon, the Skunk Gun can be upgraded to compensate for its weakness. The High Capacity Magazine upgrade will boost the number of shots you can fire, while Swarming Rounds will cause your shots to home in on enemies. 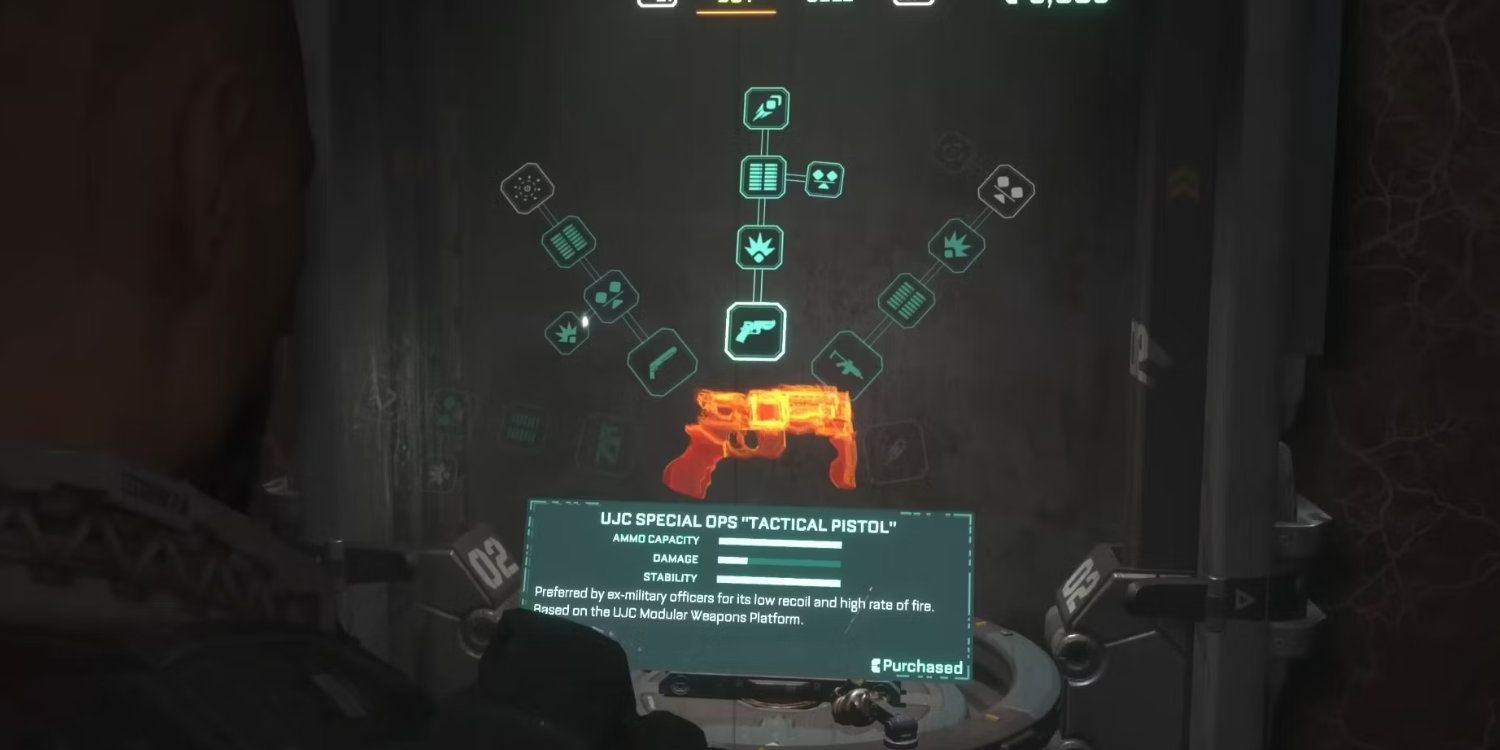 The Tactical Pistol can first be found in Workshop 2A in the “Below” chapter. It is the functional opposite of the Hand Cannon. The weapon fires very quickly at low recoil, trading damage per shot for the fast fire rate. This allows it to excel in close-range combat in tandem with your melee weapons. The pistol's quick draw time will allow you to pop it out against groups of enemies in a pinch.

Of course, the Tactical Pistol also comes with some nice upgrade potential. For example, it has the same upgrades as other guns for increasing ammo capacity and reducing recoil. The Tactical Pistol also has a unique upgrade called the TK33 Burst Mode. Like the Hand Cannon, this upgrade gives the tactical pistol an alternate firing mode. It allows you to shoot a devastating five-round burst of bullets at once and can shred through enemies with a single use of the trigger. 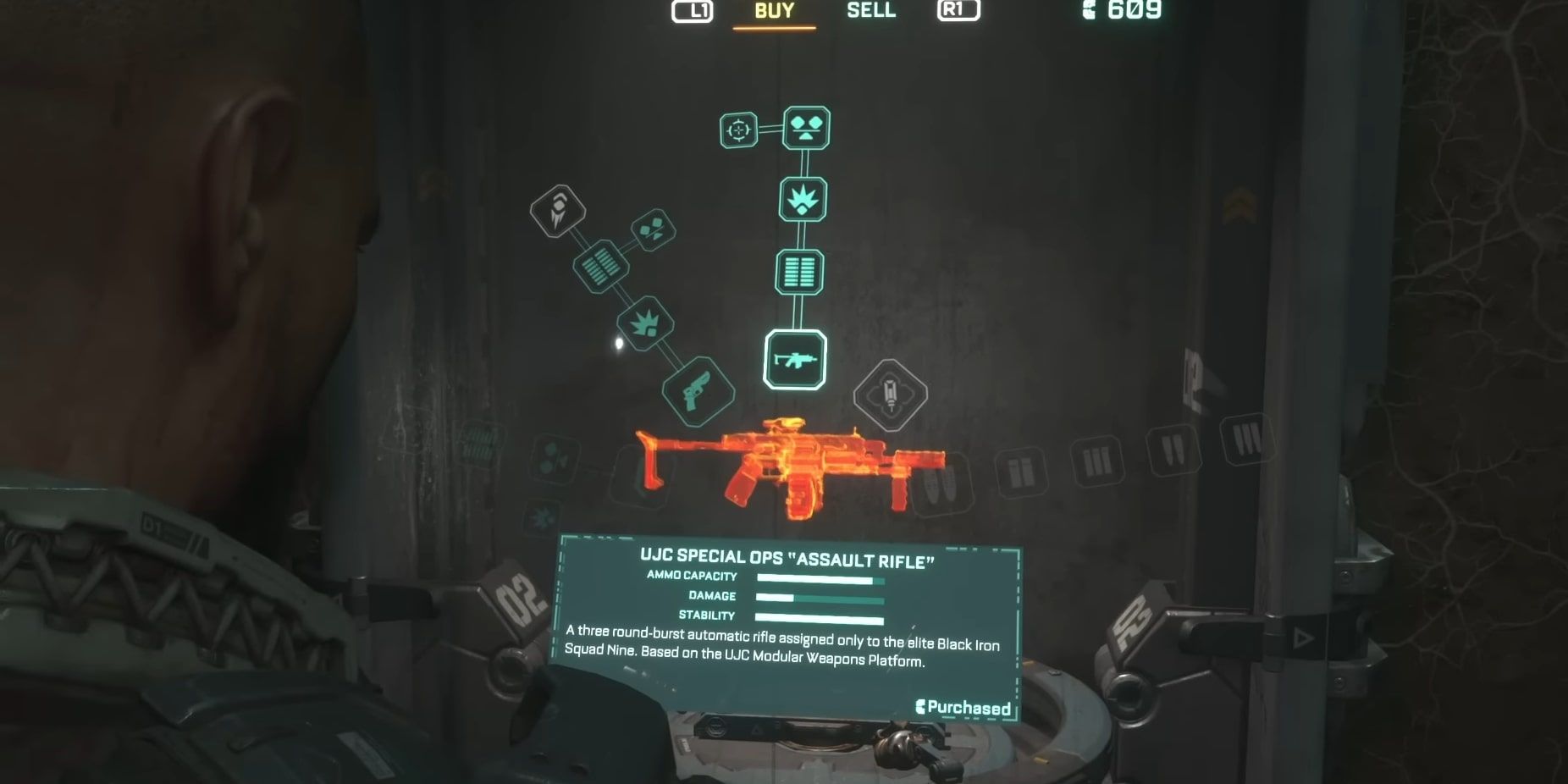 As the only automatic weapon in the game, the Assault Rifle is deadly. The schematic can first be obtained in the “Colony” chapter inside the General Store bathroom. At lower difficulties, this weapon's fire rate and range will mow down enemies. Unfortunately, the Assault Rifle has two setbacks. It will make its way into your hands late into the game, at which point your other weapons will already be upgraded. Additionally, most fights take place in small spaces that take away from the Assault Rifle's greatest strengths.

At higher difficulties, you will likely want to use other weapons, such as the Riot Gun. Although if you decide to stick with the Assault Rifle, you will find effective use of the TK63 Homing Rounds upgrade. If you're in a situation that makes calculated shots impossible, the homing capabilities of this upgrade can save your life. 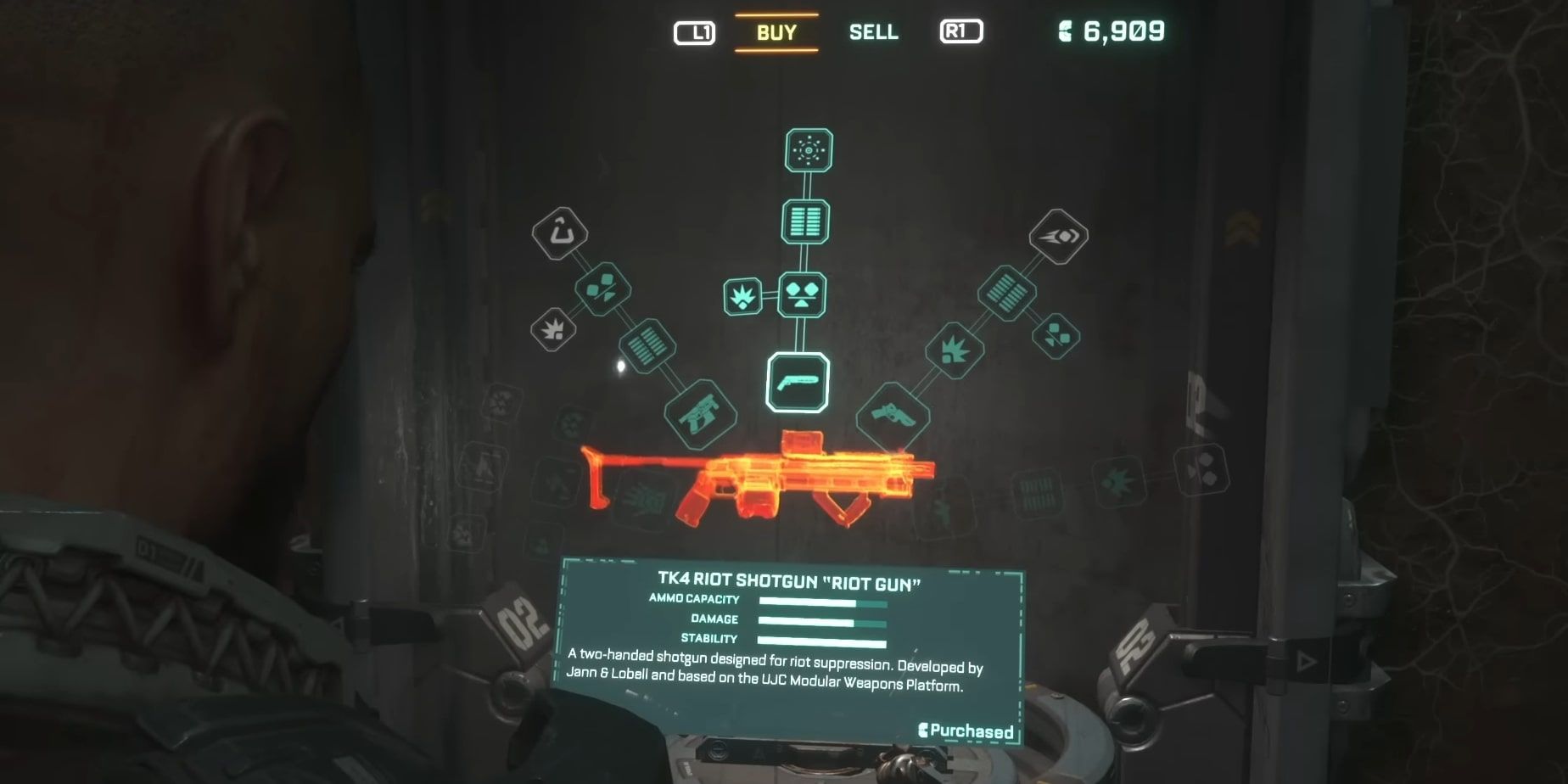 The Riot Gun is a powerful shotgun given to you by Dani Nakamura in the “Lost” chapter. The weapon does incredibly high amounts of burst damage and can literally blow smaller enemies apart. It excels in boss encounters, so you will likely want to conserve your ammo against lesser enemies. However, with the explosive rounds upgrade, the Riot Gun can obliterate multiple enemies. It will cost a bit more ammo per shot, but when you can delete a group of Biophage in one blast, the cost will feel justified.

Unlike its smaller cousin, the Skunk Gun, the Riot Gun is better suited against groups or particularly tough foes. Remember to aim for center mass, then watch as the foul creatures that attack you find themselves splattered against the wall. 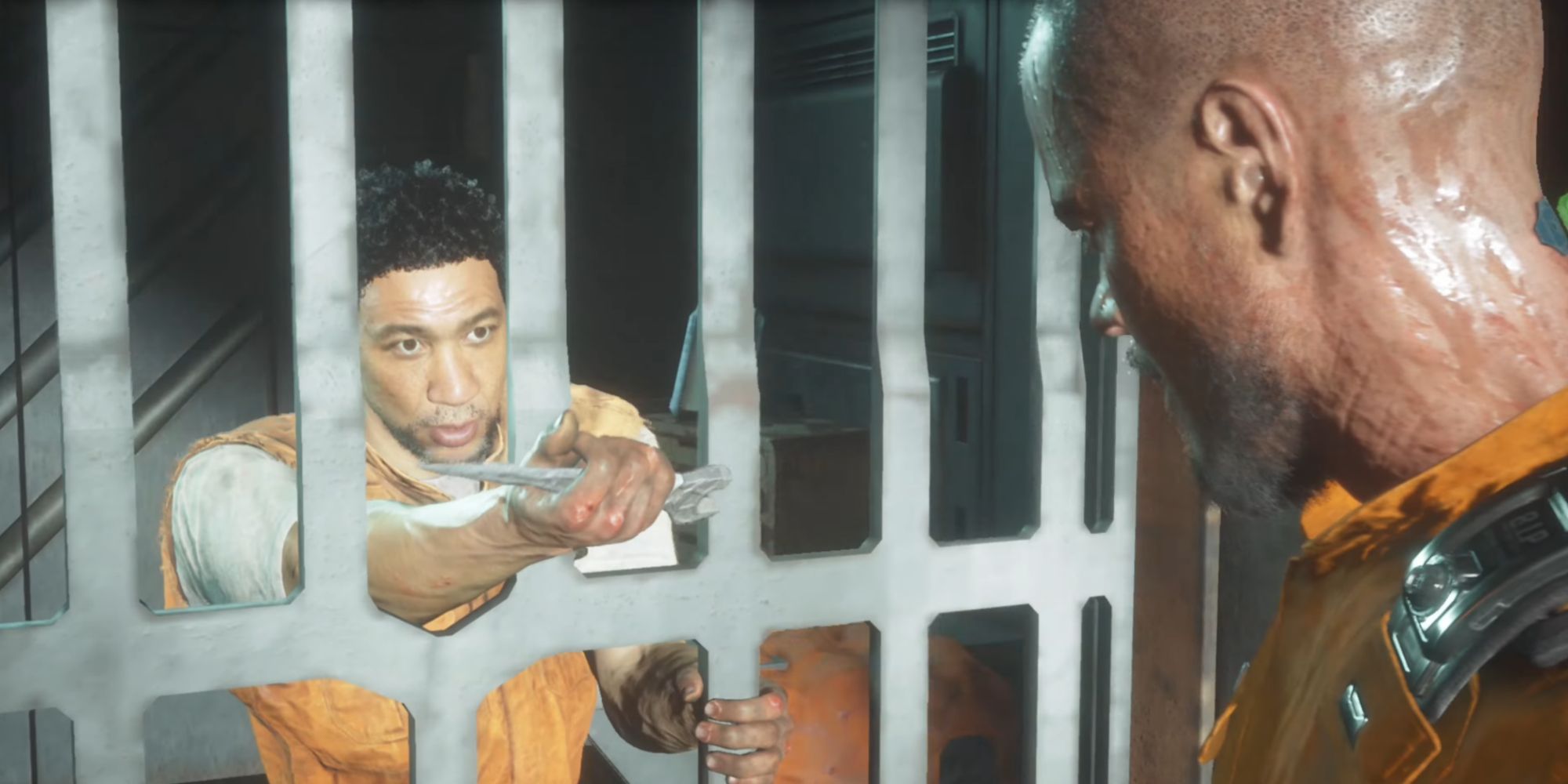 The Shiv is a rusty metal wrench that has had one side frantically sharpened into a small knife. While not actually a gun, it is the first weapon you will receive early on in the game and thus deserves a mention. This little poker is more effective at spreading tetanus than serving as a legitimate threat. However, it serves well as a tool to open certain areas or as a makeshift stealth weapon.

If you can sneak up behind enemies, the shiv will allow you to silently take them down. Just remember that this is the last thing you want to be caught in the open with against an aggressive Biophage.