You are here:
Home / The Best Thing About Dragonflight Is That It Doesn’t Feel Like A Second Job

In the lead up to the launch of Dragonflight, it seemed like Blizzard was being particularly tight-lipped about the expansion. Ahead of Shadowlands, we learned all about the roguelike Torghast dungeon, the daily grind for Stygia in the Maw, and the individual covenant campaigns. Before Battle for Azeroth, we were treated to details around the Island Expeditions, Warfronts, Faction Assaults, and the big changes that were made to the War Table. Previous expansions have all had their own unique activities to participate in and new ways to grind, but when it came time to advertise Dragonflight, the only new major content advertised was dragonriding. I kept waiting to find out about the new Torghast-like activity, but we never did.

We’re three weeks into the expansion now, and it turns out the reason Blizzard never revealed the new daily grind is because there isn’t one. There’s a lot of new public events, like Primal Storms, the Seige on Dragonbane Keep, and the Grand Hunt, but unlike Shadowlands, there isn’t a core endgame task you need to keep up with week after week. This might sound like there’s less to do in Dragonflight, but this decentralized approach to grinding actually is the expansion's big new feature. There’s an open-endedness to Dragonflight’s activities that allows you to pursue the things you're interested in and ignore the ones you’re not. The self-determination in Dragonflight is a breath of fresh air, and while it’s still early in the expansion, I’m delighted that, for once, logging into WoW doesn’t feel like clocking-in to a second job.

WoW has always offered a wide range of pursuits. PvP is entirely separate from PvE activities like Mythic dungeons and raiding, and they have completely different playerbases. Some people dedicate all of their time to WoW’s Pokemon-like pet battles, while others spend their energy collecting rare mounts. Some people grind rep, some people focus on improving at their professions, and some just want to get rich. There are plenty of different ways to play WoW, but generally speaking, new expansions are built around the pursuit of power. Leveling up, earning gear, and pushing harder content is how most people engage with WoW, and there’s typically a clear path to get there. 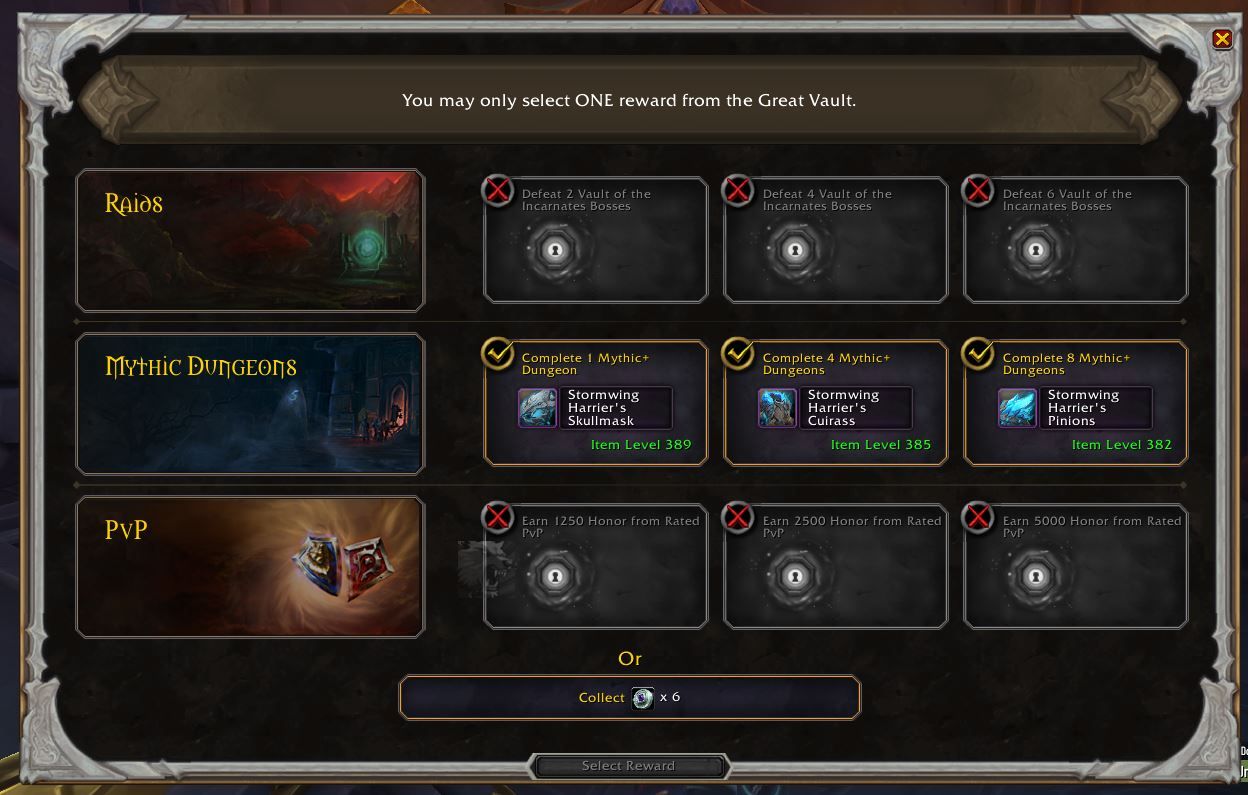 Prior to Dragonflight, the grind was straightforward and fairly linear. In Shadowlands, you’d start each week completing your Covenant campaign quests before heading to the Maw to grind Stygia, which was used to buy upgrades for Torghast. Then you’d grind Torghast for Soul Ash to craft legendary gear. You’d take that gear into Mythic+ dungeons and run a dozen or more in order to upgrade your weekly vault reward. Rinse, and repeat. This was the same process for PvP players, and if you wanted the best gear possible, you’d need to participate in the most challenging raids.

The beauty of Dragonflight is that there isn’t just one way forward anymore. If you want higher level gear you can do dungeons, but you can also grind keys in the Obsidian Citadel where the rares drop gear that scales to your level. You can farm Primal Storms for Elemental Overflow and Storm Sigils to craft 385 gear. You can focus on mining ore and skinning animals then build on professions like Leatherworking or Blacksmithing and craft your own high-level gear. There are so many more paths to power now, and it's up to you to decide which methods are the most engaging for you.

The best representation of WoW’s new progression philosophy is the Great Vault, which has changed dramatically over the years. The Vault’s requirements were slowly decreased throughout Shadowlands, and Dragonflight picks up where Shadowlands Season 4 left off with one major improvement. Whether you raid, PvP, or run dungeons, you can earn a reward from the vault with minimum effort, but now the vault offers the same gear for raids and dungeons. You no longer need to run dungeons to prepare for raids, because doing dungeons can reward you with the highest-level gear. If you’re a PvP player, that means you only need to run a single Mythic+ dungeon each week for a chance at getting raid gear.

Dragonflight represents a refinement for WoW’s systems more than an evolution, and it puts the MMO in a fantastic position for the future. Now when I log-in, I don’t feel the pressure to get on the grind and keep up with an ever-increasing gear level through dungeons and raiding. The world is so much more open than ever before, and I feel like I can head out in any direction and find something worthwhile to do.