You are here:
Home / The best of Gen Con 2022 round-up – from SolForge Fusion to Vagrantsong 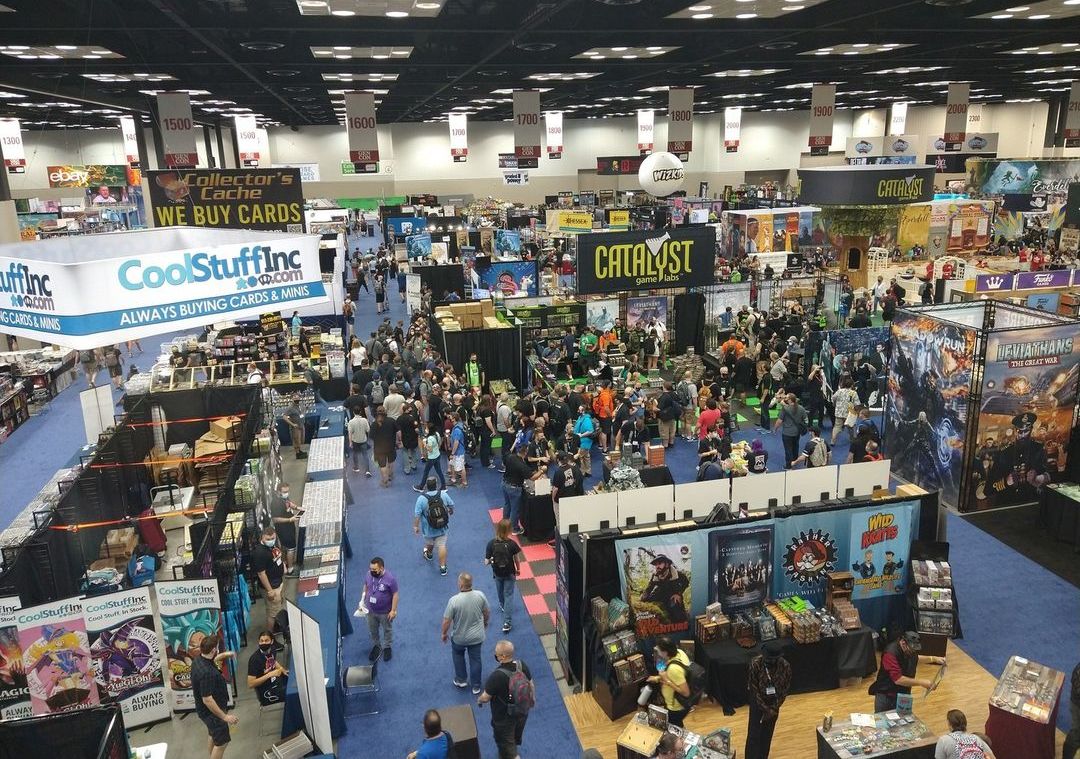 GameCentral takes a look at all the new board games and RPGs revealed at Gen Con 2022, the world’s biggest tabletop gaming convention.

The summer games drought is currently at its height when it comes to video games but August is a very busy month for tabletop gaming. While fans in the UK are getting hyped for the Pokémon Trading Card Game World Championships, on August 17, last weekend saw the biggest tabletop gathering in the world, Gen Con, take place in Indianapolis in the US.

In 2020 Gen Con was cancelled and last year saw a reduced schedule, with many events moving online, so it was great to see that this year’s convention was back in full force. Huge crowds were in attendance, looking to play a host of new board games, role-playing games, card games, and deck-building games.

Now that board games are more popular than ever, there were lots of innovative designs and themes on display – not just the usual Tolkien-esque adventures. These are some of the most interesting that caught our eye, which should start becoming available over the next 12 months.

We’ve always been big fans of Wyrd Games, whose miniatures games like Malifaux appeal to our inner (and outer) Goth, with Tim Burton-esque aesthetics and colourfully creepy characters. Their new offering, Vagrantsong, is a cooperative and story-driven boss battler where you take on the role of a tramp trapped on a supernatural ghost train, the Silver Ferryman.

You must battle ghosts called haints, who are haunting the train, by choosing between different class types such as the knife-wielding Curse Bearer or the Run Away who has a shaggy dog in tow. You can adjust your playstyle with different skills and resources picked up as you play. Succumb to the ghosts and you’ll feel like you’re on the Gatwick Express, as you’re doomed to ride the train forever.

If that sounds a bit too grim, the Cuphead style characters and rubber hose-limbed ghosts are all fun designs. Plus, you can look out for the Fox Sisters expansion for some new spooky séance mechanics.

From Richard Garfield, creator of Magic: The Gathering, and Justin Gary, creator of the Ascension: Deckbuilding Game, comes SolForge Fusion. Touted as the next evolution in trading card games, it’s a must for those who love deck building but it’s not for newcomers to the hobby. Designed to be tournament ready from the start, SolForge sees players take part in strategic lane-based combat, with decks that are algorithmically generated – so no two are ever the same.

When you play a card it levels up, allowing you to access new powers and abilities to defeat your opponent and damage their creatures. The first player to bring their opponent down to zero health wins! It’s a complex concept, but we love the idea of having such versatile decks, with the ability to fuse cards together and level up as you play.

There’s more than a touch of Tomb Raider to this beast of a 3D game, which has some astonishing build quality for its many pieces. You play as adventurers who place clay blocks in a central archaeological ruin, in order to match puzzle patterns.

One to four players take turns adding blocks to the gridded floor of the temple, in an attempt to recreate the two-dimensional outlines and match the patterns on their game cards. More complicated designs get you more points and while the game is inventive and ostensibly family friendly it can get quite cutthroat as you disrupt your rivals from completing their designs.

Fondly known in my house as Chasing Canines, Bark Avenue is a competitive delivery game where you play as a dog walker in New York City. There’s a lot to unpack between poop scoops, as you need to balance walk length, preferred doggie day care activities, and the compatibility of several dogs at once.

You must check maps to determine dog walking routes and who gets to be next for walkies, so you can build a successful career and unlock new abilities. Don’t be late or it’s straight to the vets for you!

Steam Up: A Feast of Dim Sum

A game Gordon Ramsay would certainly approve of, Steam Up is a competitive 2-5 player collection and action management game, with some delicious dinner designs. Bamboo steamers, filled with different types of dim sum, are stacked and placed on a turntable, with menu items including shrimp dumplings, meat dumplings, BBQ meat buns, sticky rice, and the exotic phoenix claws.

Each player plays a character from a beautifully illustrated card, such as a tiger who’s a seafood lover or a piglet who’s a food blogger, and they take turns performing actions each round, such as gaining and spending food tokens to purchase steamers or playing Fortune cards to benefit themselves or affect their opponents.

Just as you’re developing a strategy, a Fate card is revealed which affects all players and can upset the entire table. The game ends when a specific number of steamers are purchased or the Fate deck is emptied. This is a short and fun game where the player with the most hearty points wins.

This new game works like a cross between the board game Parks and card game Photograph (Wind The Film). After being given a single word, players must pick one of the stunning photographic play cards, that they think best represents it. So, for example, you might be given the word ‘slippery’ and choose to play a picture of a waterfall.

The cards are shuffled so no one knows whose card is whose and then everyone votes on which of the chosen images they think aligns best with the word, and then that image becomes a ‘keeper’ and earns the owner a point. Clever use of words will trip up your opponents, so if you like Dixit this game is for you.

The jewel in the crown of my gaming collection is 3D Catan; even though it takes up half of my living room it never fails to solicit ‘ahhhs’ of wonder from any tabletop gamer who visits. This newest incarnation of Catan see players going back to the Ice Age, as they guide the first humans on their migratory journey through the world, while developing their technology and culture.

It’s pretty much a reboot of The Settlers Of The Stone Age but there’s plenty of new elements, strategies, and adventures to keep new players and converts placing tiles. Cities become fur tents and mammoths roam free in this new standalone game, and we can’t wait to see how technological upgrades enhance the familiar mechanics.

I recently visited the new immersive theatre experience in London called Phantom Peak and couldn’t get enough of the steampunk Sherlock shenanigans. Turing Machine has some similar themes and is a captivating and competitive deduction game, where you question a proto-computer (made of cardboard) to discover secret codes.

You must use sets of three perforated cards to work out the puzzles and there’s plenty of chances to become an expert code cracker, as the game boasts more than seven million problems – from simple to mind-staggeringly complex combinations.

Almost at the end of the list and still no mention of Cthulhu? Well, the closest you’ll get today is a visit to Weirdwood Manor. This is a cooperative board game where you and your group of intrepid companions battle to protect Weirdwood Manor and its inscrutable ruler, Lady Weirdwood, from an invading monster and his clockwork scarab minions.

The circular spinning board not only looks cool but controls a neat temporal game mechanic, that’s not necessarily as complex as it initially looks. There are six characters to play as, all with unique abilities, who need to travel together through the mansion’s shifting rooms and corridors. Card decks allow you to perform various chain actions for powerful attacks, in what is a surprisingly action-packed game.

When it’s the monster’s turn they can use their own custom deck of cards, which allows then to grow increasingly stronger. Weirdwood Manor is an accessible but tactical game, with built in unpredictability so you’ll have to work together before time runs out.

Coming to Kickstarter in spring 2023

Nearly as old as Dungeons & Dragons, and originally launched in Sweden in 1982, Drakar Och Demoner is celebrating its 40th anniversary this year and what better way than with a revamped new edition and an English language version.

Dragonbane is a classic fantasy role-player full of magic, mystery, and adventure, now streamlined for fast and furious campaigning. We’re looking forward to seeing some new illustrations from artist Johan Egerkrans, with the game’s famous ‘mirth and mayhem’ style allowing for either days-long campaigns or quick adventures that can be played in an afternoon.