You are here:
Home / The Best Melee Weapons In Tiny Tina’s Wonderlands, Ranked

Melee weapons are often overlooked in the chaotic shoot-and-loot adventure that is Tiny Tina's Wonderlands. They can be difficult to get any utility out of, seeing as they are only for close-ranged combat. However, there are quite a few Legendary Melee Weapons that not only add a bit of pizazz to your weapon build, but make it easier to take some swings without dying in the process.

If you have set your heart on any of these Legendary weapons, keep in mind that it becomes much easier to farm for Legendary items with higher Loot Luck. Don't forget to hunt for some Lucky Dice for the best shot at obtaining these goodies. 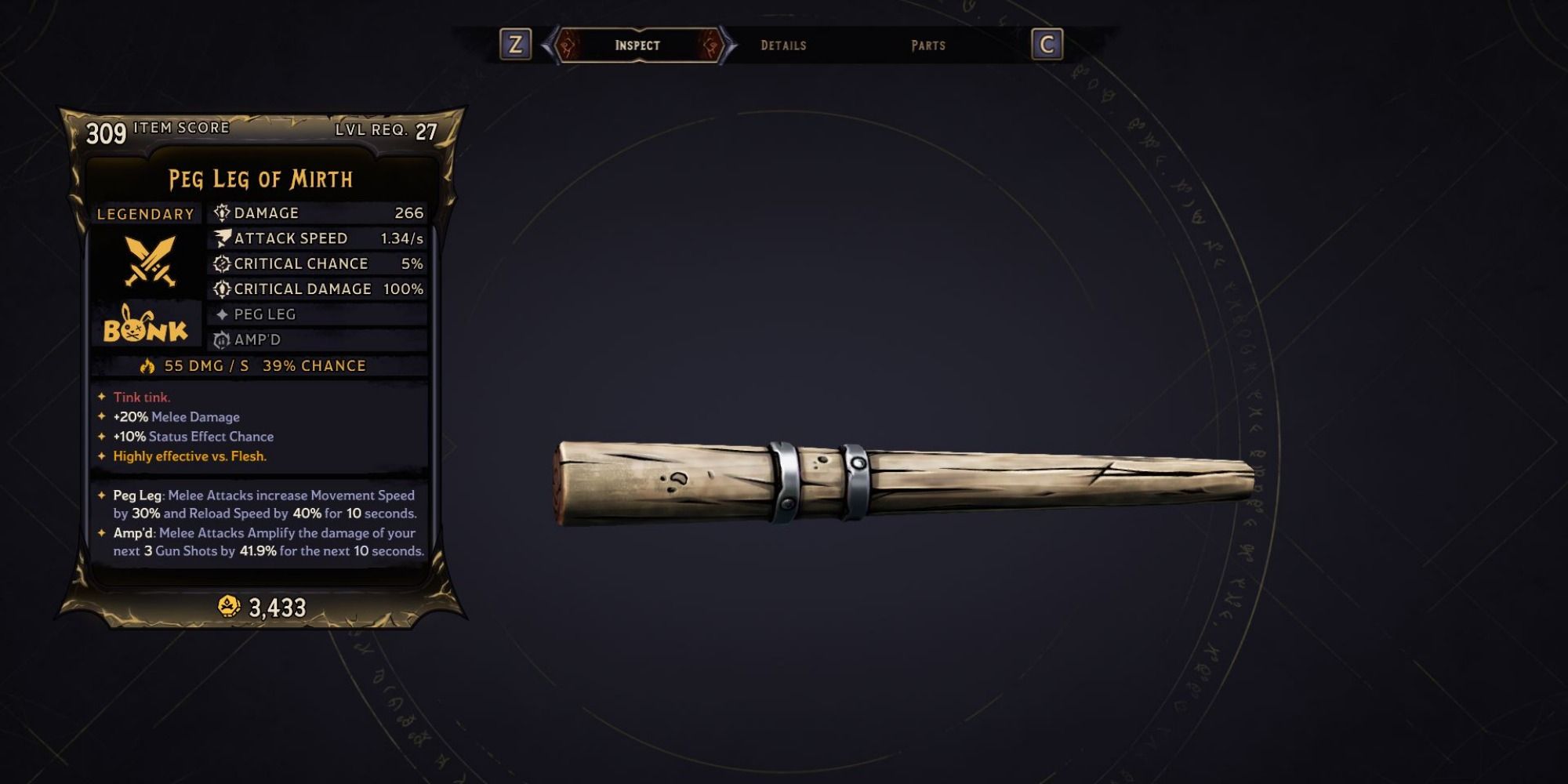 The Peg Leg is essentially your "get out of jail free" card, should you find yourself in closer quarters than you would care for. Just take a few swings with the Peg Leg after you have emptied your clip to zip out of the fray and get an even faster reload. While this is a world drop Legendary, the best place to farm for the Peg Leg drop is at the LeChance boss fight in Wargtooth Shallows. 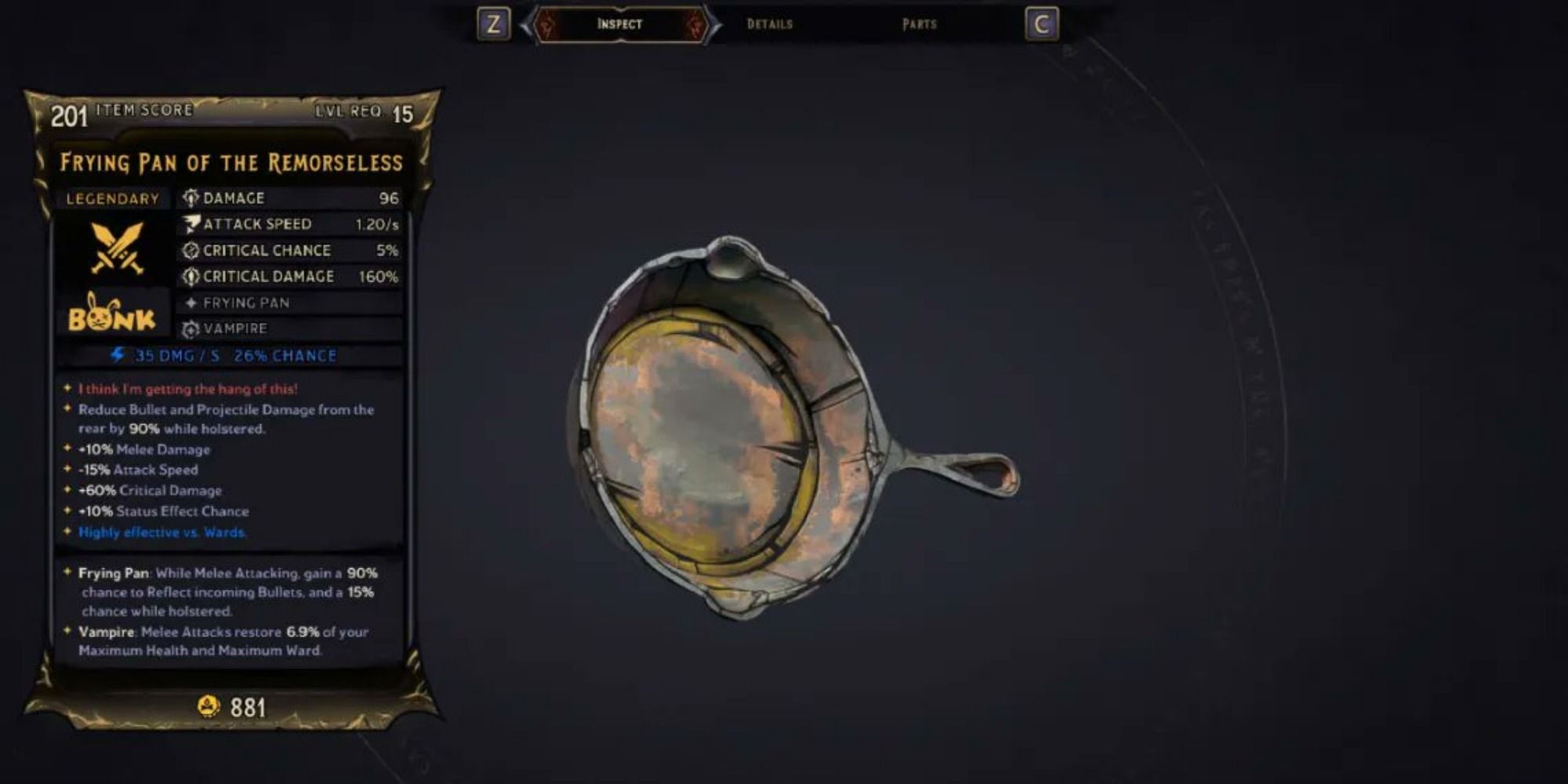 The choice weapon of brave hobbits everywhere, the Frying Pan Legendary is an awesome melee weapon for a more tank-y build. While equipped, you have a chance of deflecting bullets back at enemies, and an even higher chance of doing so while swinging. This Legendary is only a world drop, meaning it could be dropped from any old monster. To increase your odds of looting it, collect as many Lucky Dice as possible. 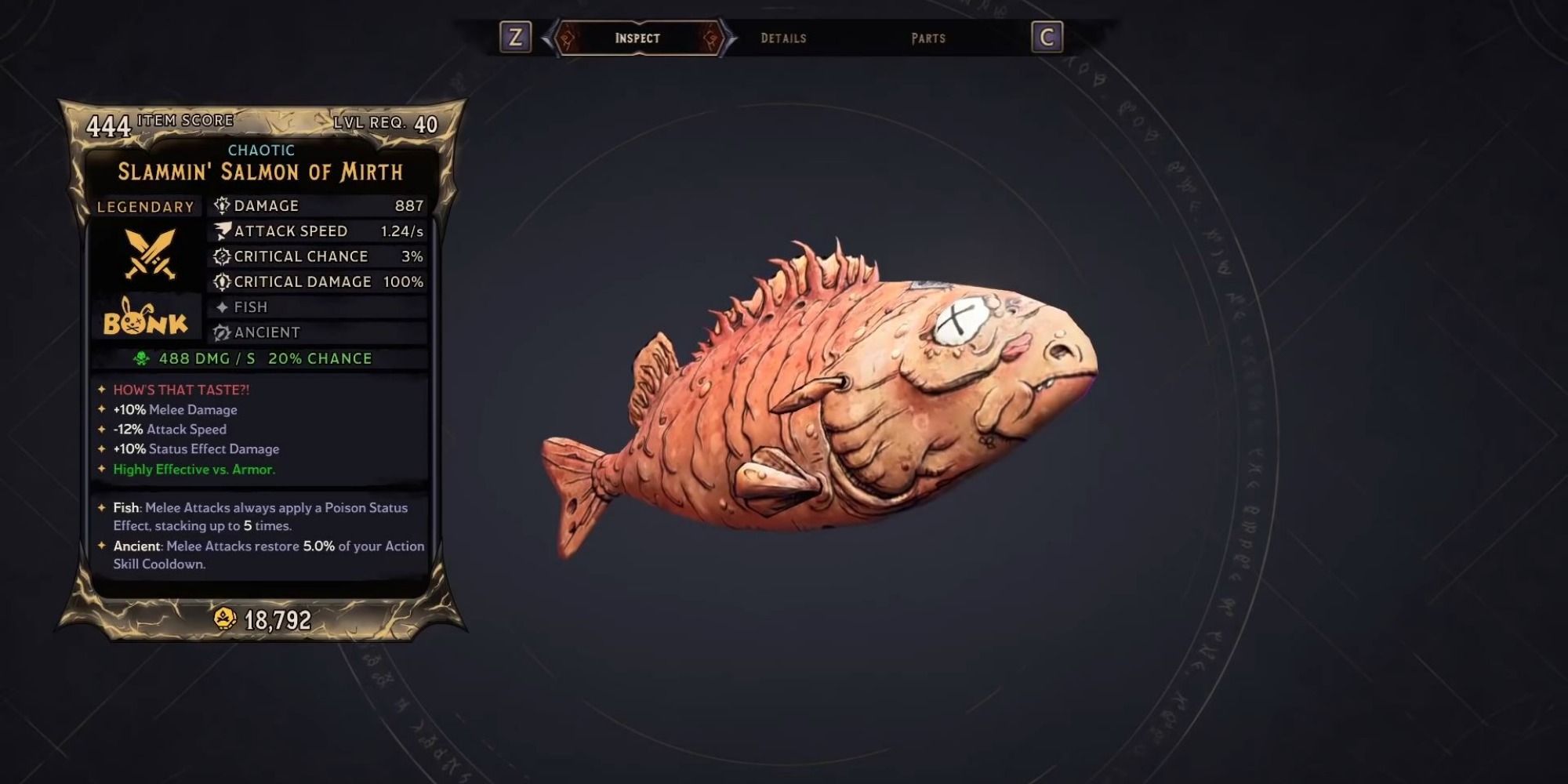 Nothing kicks off a fight quite like slapping your opponent with a stinky fish. The Slammin' Salmon hits any enemy with a Poison debuff that will start ticking damage. Slap 'em with your fish, then hop back to shoot your enemies down as the extra poison damage eats away at them. Slammin' Salmon can be farmed at the Ancient Obelisk in Wargtooth Shallows during The Great Wight mini-boss fight. 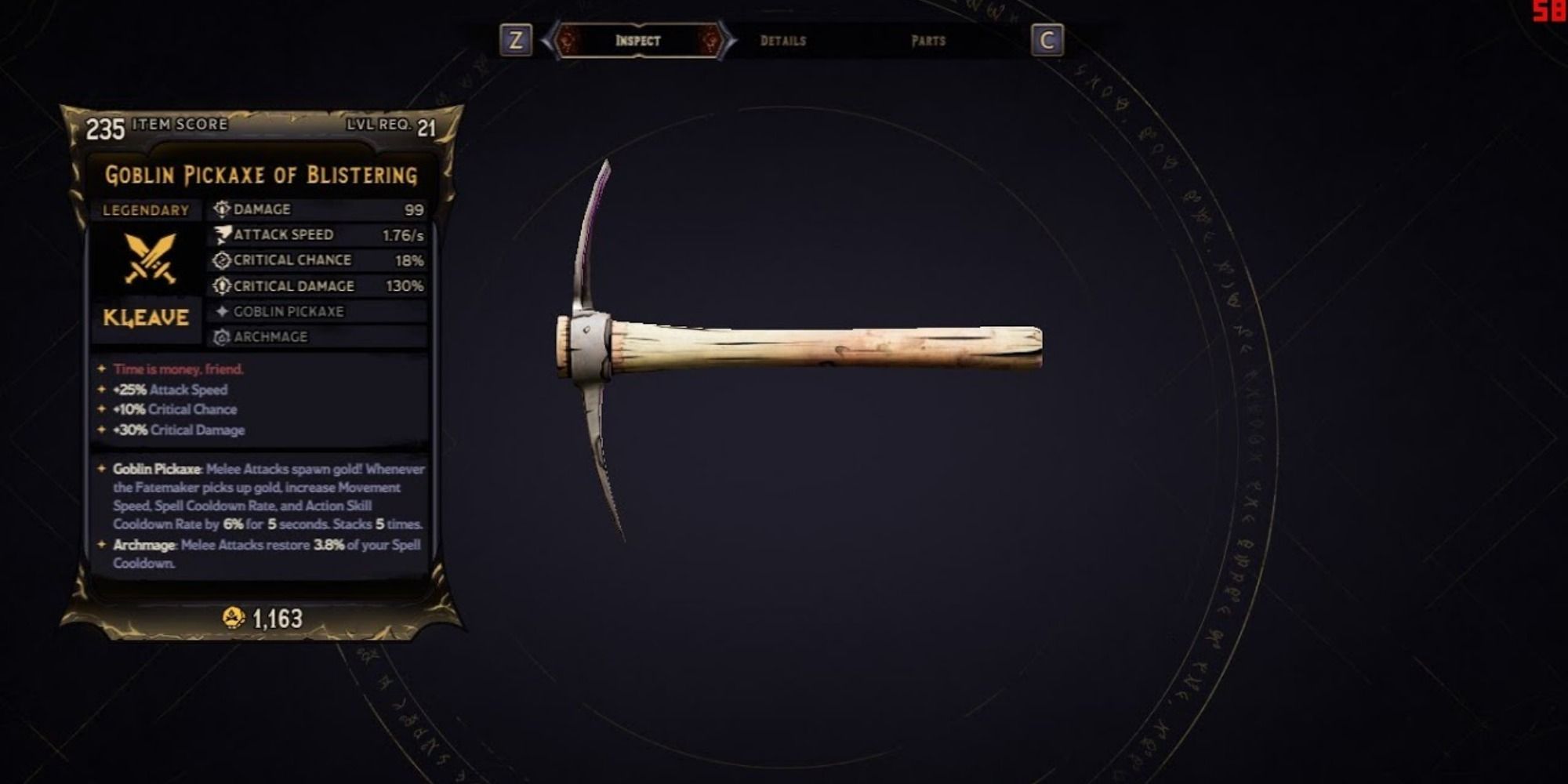 Talk about passive income. You read that right, every time you whomp someone with the Goblin Pickaxe Legendary, you smash gold out of them like a living piñata. This is actually pretty useful since as you progress further into the game, items in vending machines massively scale in price. Plus, this melee weapon increases your Movement Speed, Spell Cooldown Rate, and Action Skill Cooldown Rate for a short amount of time. It is a world drop, but to get it for yourself, try looting it from the Pigwart mini-boss at the Mount Craw Ancient Obelisk. 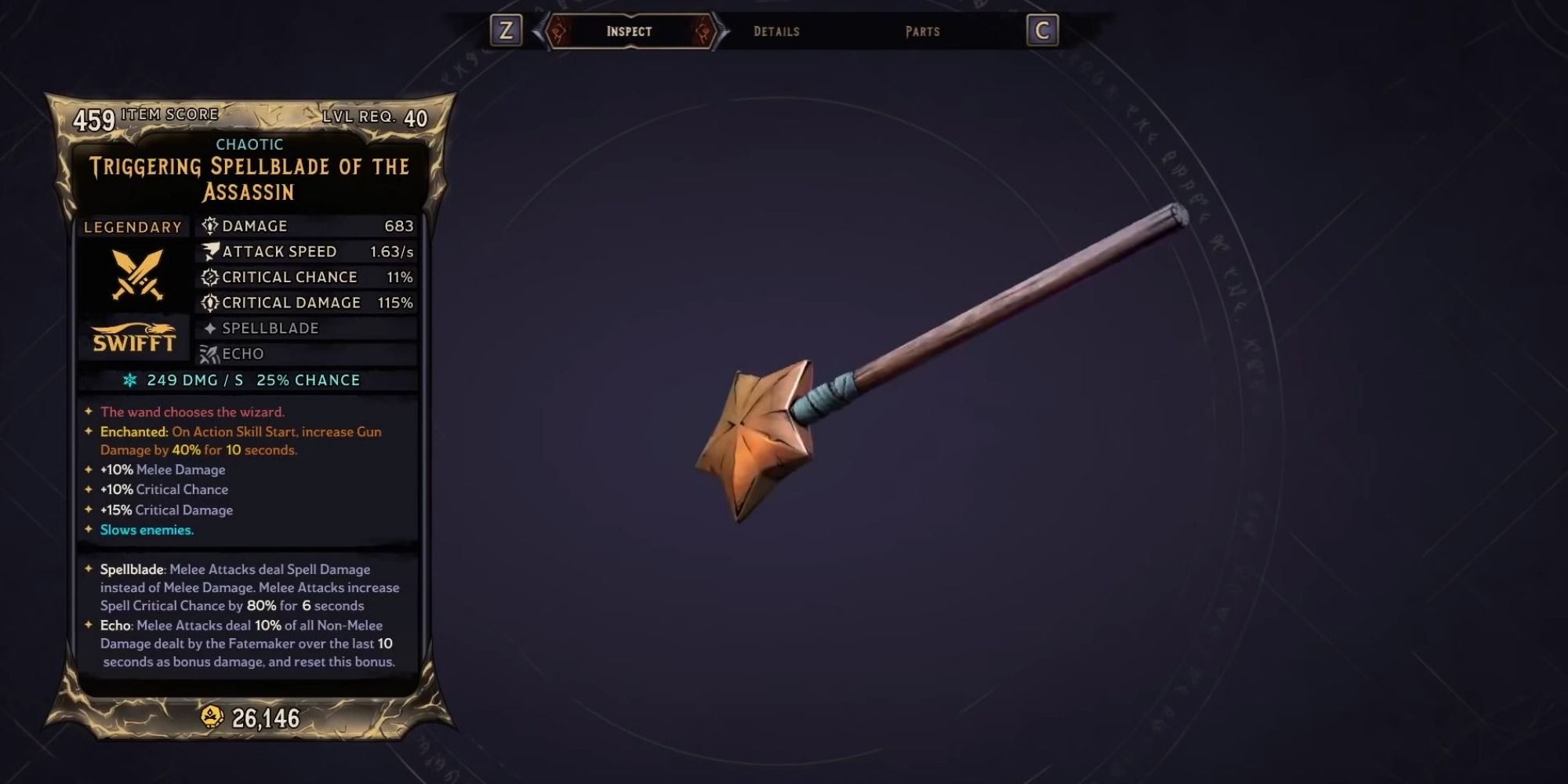 This weapon gets points straightaway for looking like a giant fairy's wand. Then it wins some extra because the Spellblade actually deals Spell Damage instead of Melee Damage. This means that with the right spell and Spellblade combo, you can do massive damage while your spells are on cooldown. While a world drop, the Spellblade Legendary has a great chance of dropping during the Wastard boss fight in Karnok's Wall. 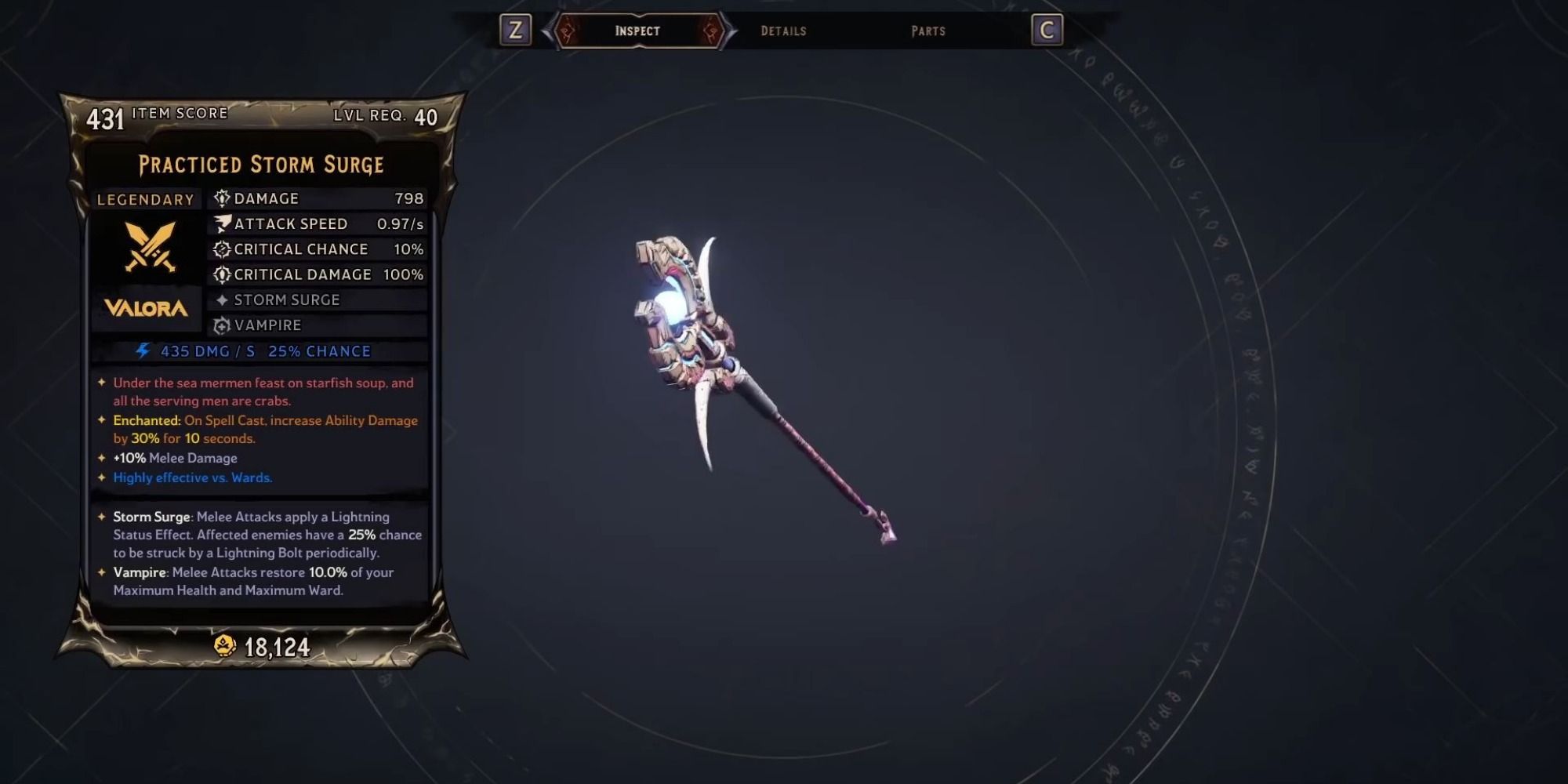 And they say lightning never strikes twice in the same spot. With the Storm Surge Legendary, peppering your foes with little whacks places an effect on them that increases the chances of Lightning striking them as long as the effect lasts. Fittingly, the only place to collect this Legendary is during the boss fight against Dry'l in Drowned Abyss, where you can also find Dry'l's Fury. 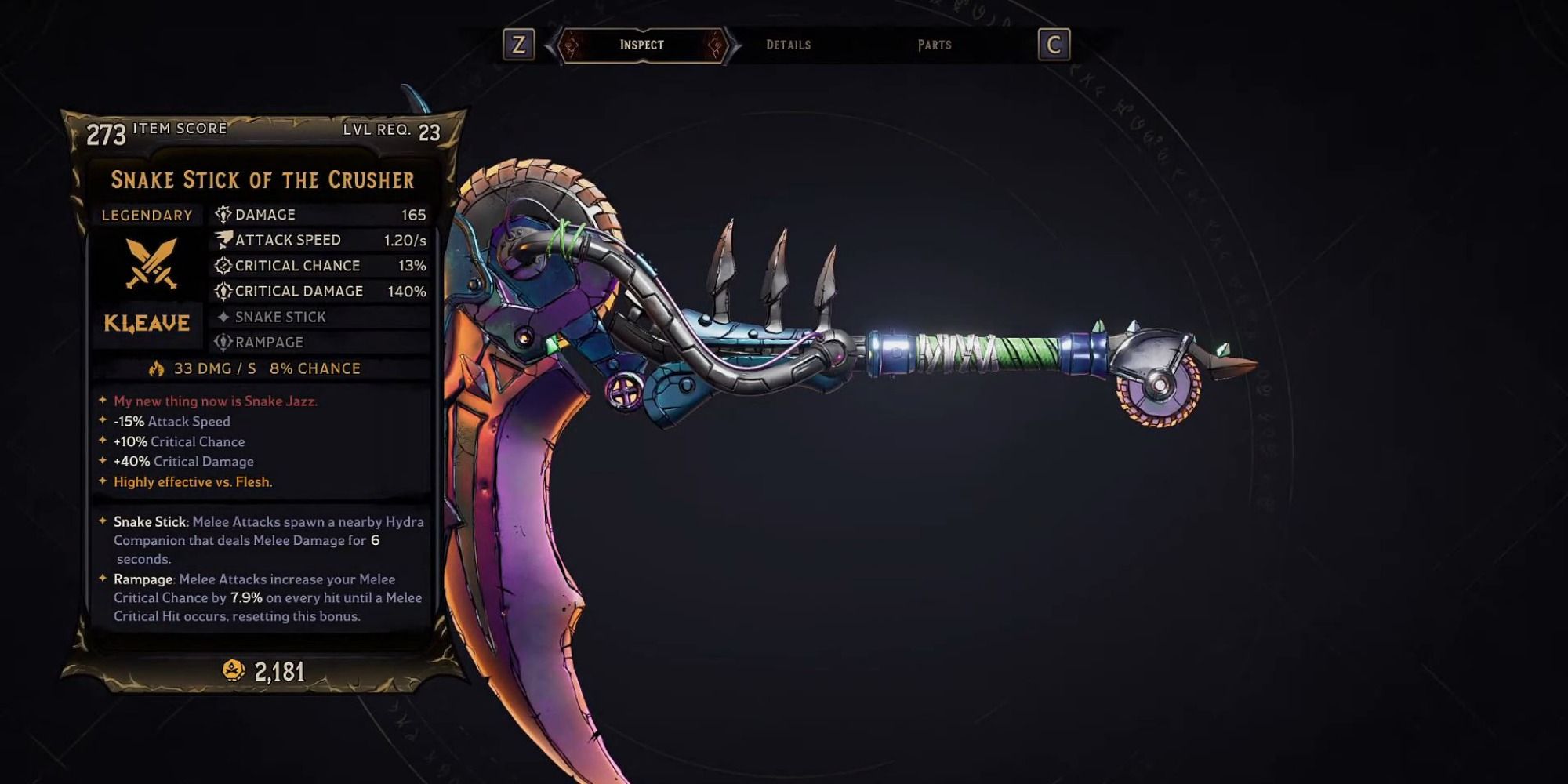 Everyone needs a little helping hand. If you find yourself struggling to get through Tiny Tina's Wonderlands solo, why not pick up the Snake Stick Legendary? This melee weapon spawns a Hydra Companion whenever you bonk an enemy, who helps you deal some extra Melee Damage for a bit. This is yet another weapon that has a good chance of dropping during The Great Wight mini-boss battle at the Ancient Obelisk in Wargtooth Shallows, but it is also a world drop. 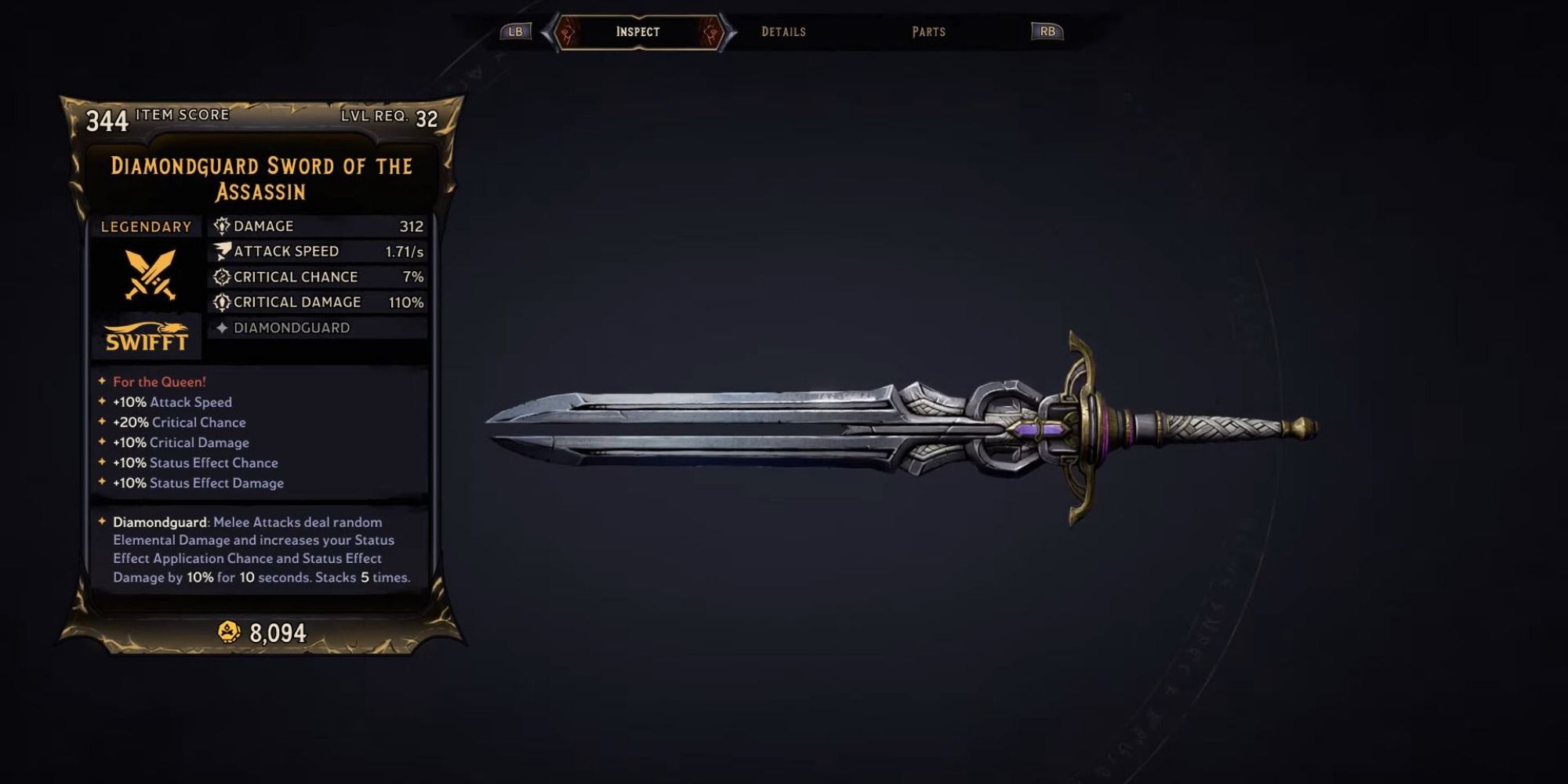 Just as diamonds can refract every color of the rainbow, the Diamonguard Legendary has a chance of dealing any kind of Elemental Damage when you strike a foe. This applies to every single time to hit an enemy, with a potential to stack up to five times. Your best shot at getting your hands on the Diamondguard is by farming the mini-bosses in the Chaos Chamber. 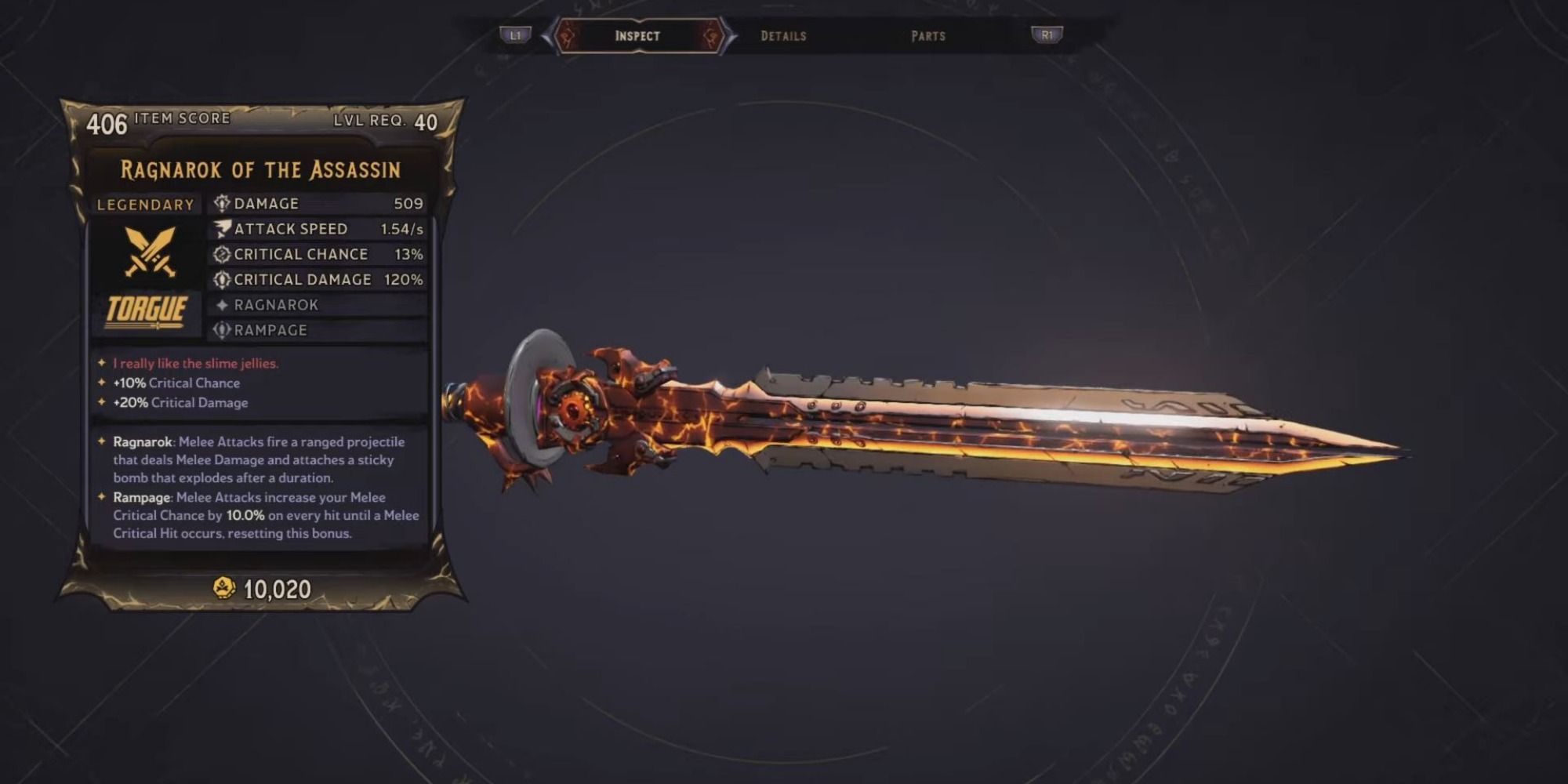 Rain fire and chaos down upon your enemies. The fiery sword Ragnarok not only shoots off a projectile every time you swing it but that projectile sticks to the enemy it finds and explodes. Get a couple of swings in here and there and watch the world burn. Ragnarok is a world drop loot, but the best place to farm this Legendary is during the secret The Maker boss fight unlocked in the Chaos Chamber. 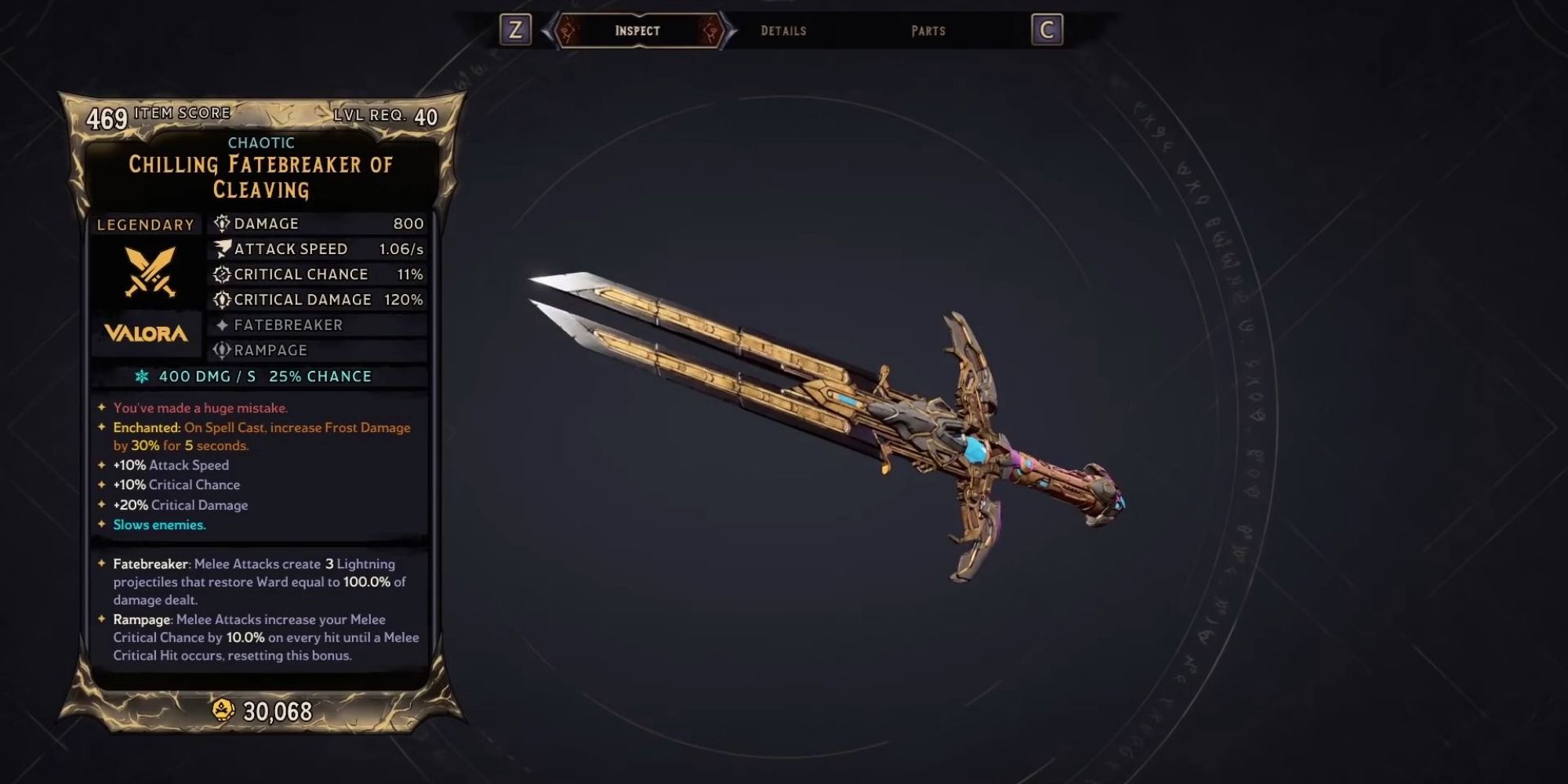 The Fatebreaker is the Legendary melee weapon that essentially never lets you die. Striking enemies not only generates Lightning projectiles but restores a massive amount of your Ward. This is a fantastic weapon for a solo or tank-focused build. It is a world drop, but to find it for yourself, farm the Dragon Lord boss fight in the Fearmid to improve your odds.