You are here:
Home / The 8 Best Armor Designs In Steelrising

The 8 Best Armor Designs In Steelrising

Set in an alternate history version of the French Revolution, Steelrising is a Soulslike that has you play as a period-appropriate robot named Aegis on a mission to take down an army of automatons and commit regicide against Louis XVI. With such an original setting, it’s no surprise that the costumes you find make just as strong of an impression.

From the neatly ornate Rochambeau set to the sleek and subtly sinister Secret du Roi set, Steelrising strikes a balance between giving Aegis a good variety of stylish outfits while still keeping each one true to the world as a whole. More importantly, these armor designs help you look even cooler when you take down yet another giant robot on your path to the throne. 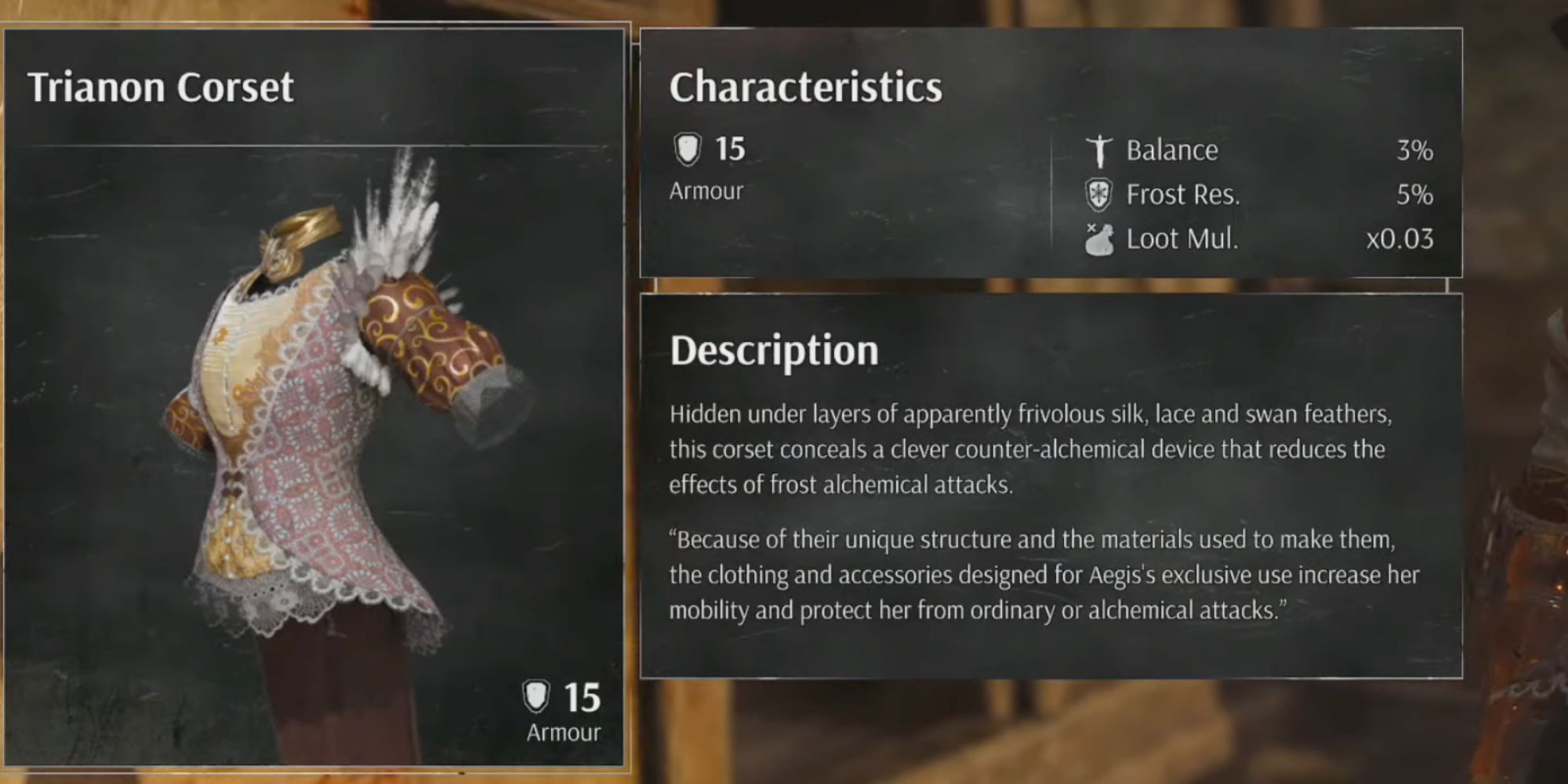 This eye-catching set is part of the Marie-Antoinette Cosmetic Pack. It has an intricate design with embroidered silk and swan feathers. This eccentric yet regal outfit is fit for royalty. Equip one of Steelrising’s more beautiful weapons like the Lady Macbeth Fans, and decimate your foes in style.

Since the Trianon set was created as pre-order bonus content, it can’t be unlocked by normal means. Fortunately, if you didn’t pre-order Steelrising, you can still purchase this set as a separate downloadable content pack. That said, you may be more impressed by some of the other outfits Aegis acquires — which can all be unlocked in-game. 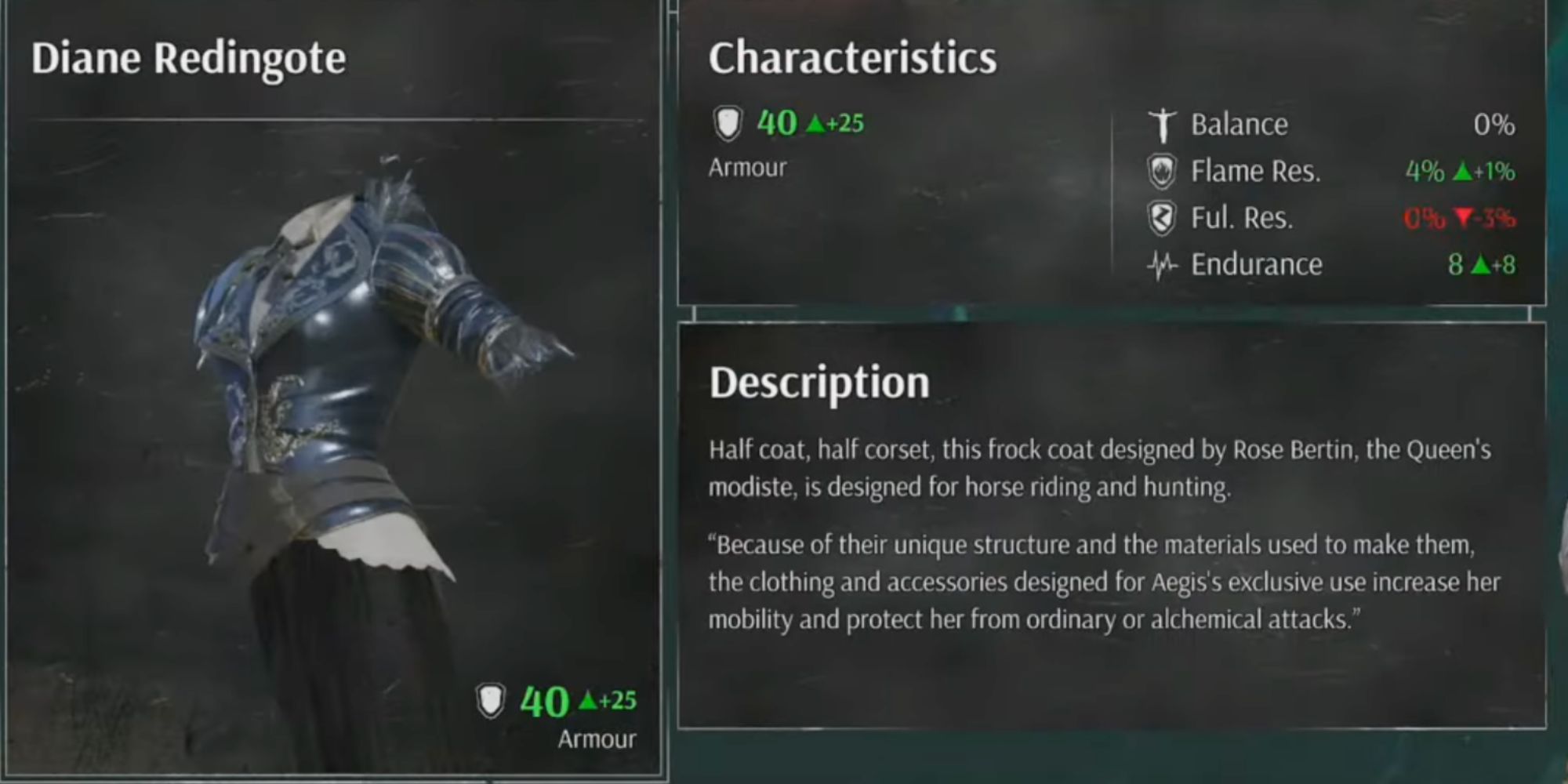 The lore behind this set is that it was made for hunting and horseback riding. This explanation is fitting for an outfit that gives Aegis a controlled, unflinching look. There’s also a shadowy element to the Diane set, with its dark, armor-like torso and distinct lack of brightness.

All four pieces of the Diane set can be found in the Les Invalides area. The capeline and redingote are located on a balcony in the Factory area. And the breeches and shoes can be found in a chest on the lower floor of the final building on the path to Esplanade Des Invalides. 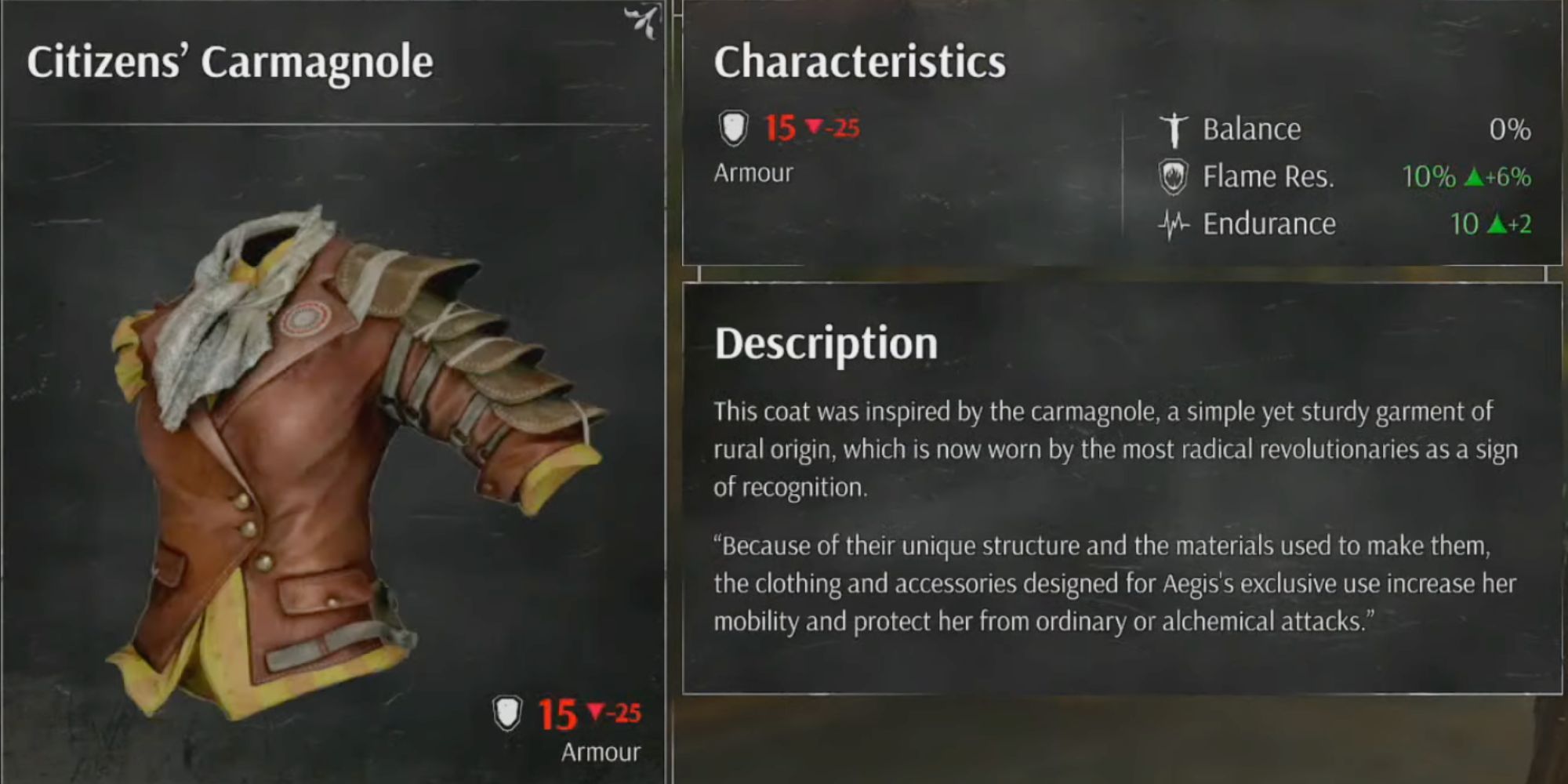 With a leather-like material and a practical appearance, the Citizen’s set is one of the plainest available to Aegis. That said, it’s also an outfit that’s ideal for the revolutionary setting. The Citizen’s outfit goes against the more elaborate designs of many of the other sets, while also maintaining an identity all its own.

Acquiring all pieces of the Citizen’s set isn’t too complicated. The top hat and carmagnole are close to where you fight the Unstable Butcher, while the trousers and clogs can be found by repairing a lever near the Vestal. 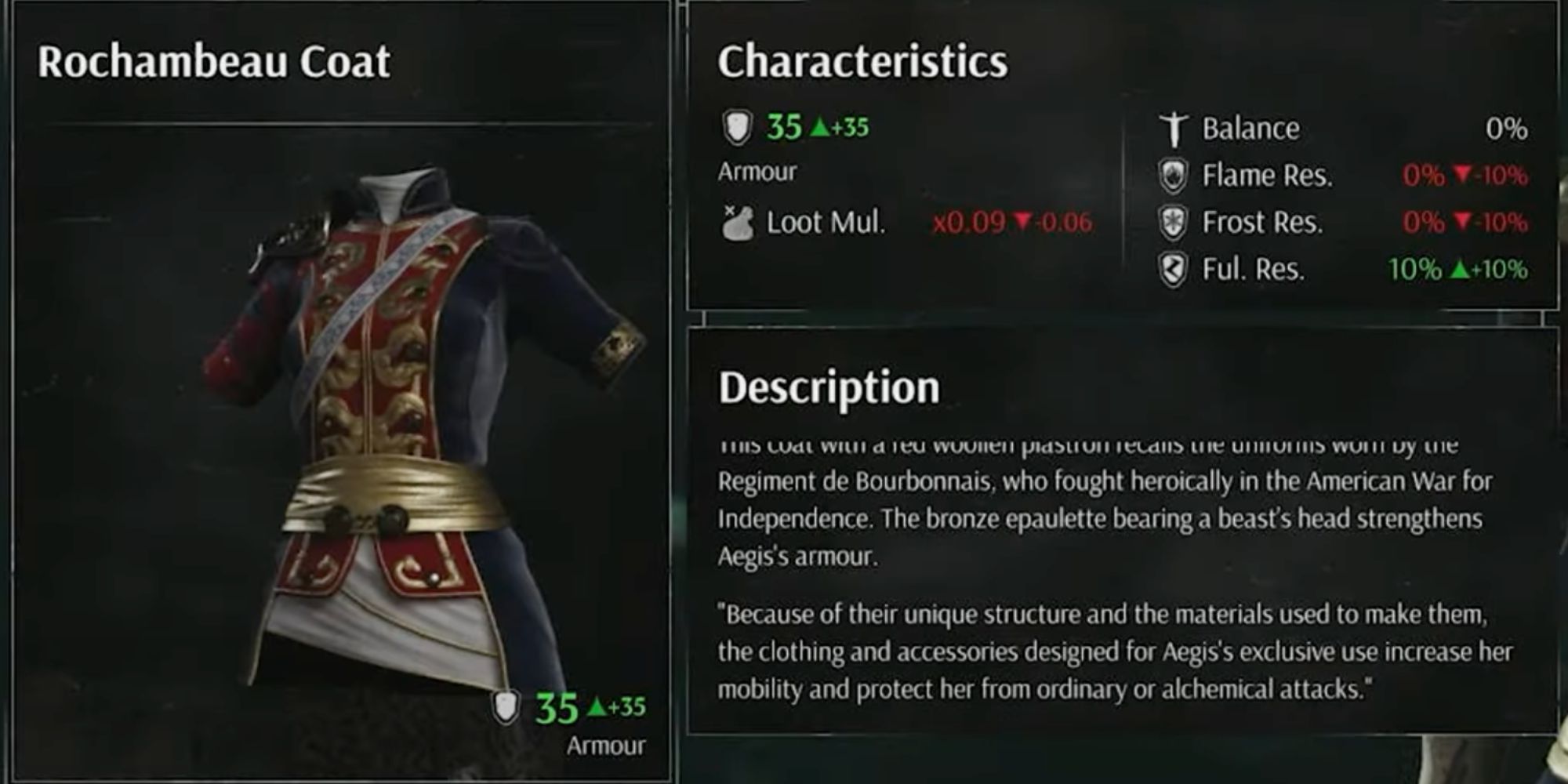 Inspired by uniforms from the United States Revolutionary War, the Rochambeau set is an elegant outfit fit for an officer. With a straightforward — if well-executed — design, the Rochambeau set isn’t the most memorable in Steelrising, but it does a good job of offering a set of attire that neatly matches the time period while managing to do a bit of world-building as well.

This set is one of the easiest to acquire in the game. All four Rochambeau pieces can be purchased from the shop. You may need to grind for Anima Essence before you can purchase the complete set, but this shouldn’t be too difficult. 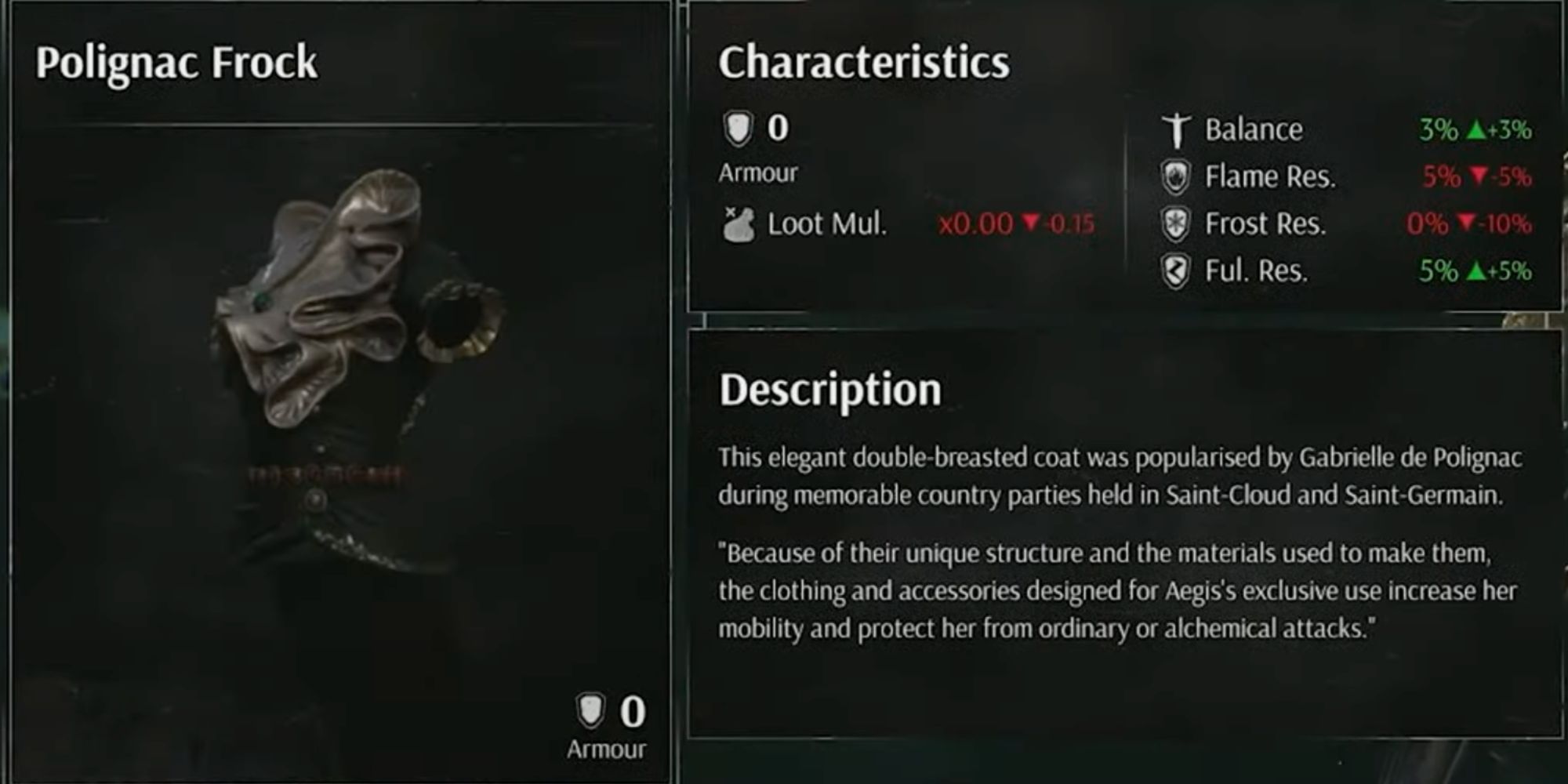 Immediately recognizable by its slightly uncanny, almost flower-like design, the Polignac set embraces the stranger elements of Steelrising. While parts of this outfit may seem to lack a defined shape at first, once in motion, it becomes precise and almost sinister. When using a weapon like the Nemesis Claws, the Polignac set makes Aegis appear light as a feather, striking and retreating in a singular, fluid motion. If you’re looking for an early-game set that really captures the style of Steelrising, look no further than the Polignac armor.

As with the Rochambeau set, you acquire most of the pieces of the Polignac set by simply purchasing them in the boutique. The one exception is the Polignac cap, which can be found in a chest during the tutorial. Shortly after you activate the first Vestal, there will be a chest located near a fountain that you can open to acquire the cap. 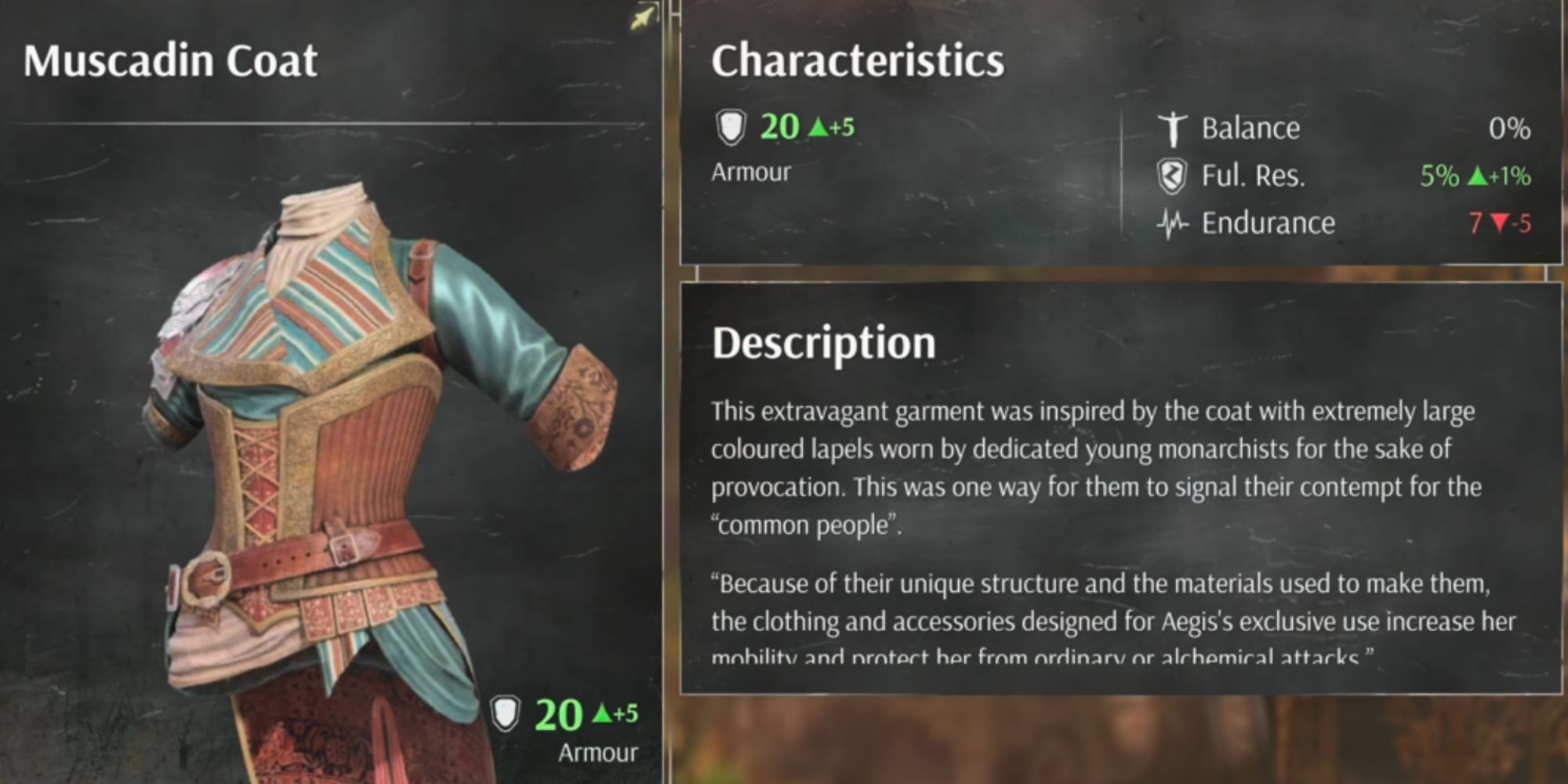 The vibrant Muscadin set has a layered look to it, blending different types of fabric and accessories. Brightly colored with a sleek, angular look, the Muscadin armor complements a brawler playstyle — good if you appreciate a direct approach to combat. To witness this outfit at its most fitting, equip it along with a heavy Halberd-type weapon and send your foes flying.

The Muscadin outfit pieces are found in two separate areas. The bicorn and coat are acquired in Saint Cloud: After you beat the first main boss, you can open a chest containing these two armor pieces in The Lantern. You can track down the remaining pieces of the set during your first visit to Les Invalides, in the Gross Caillou. 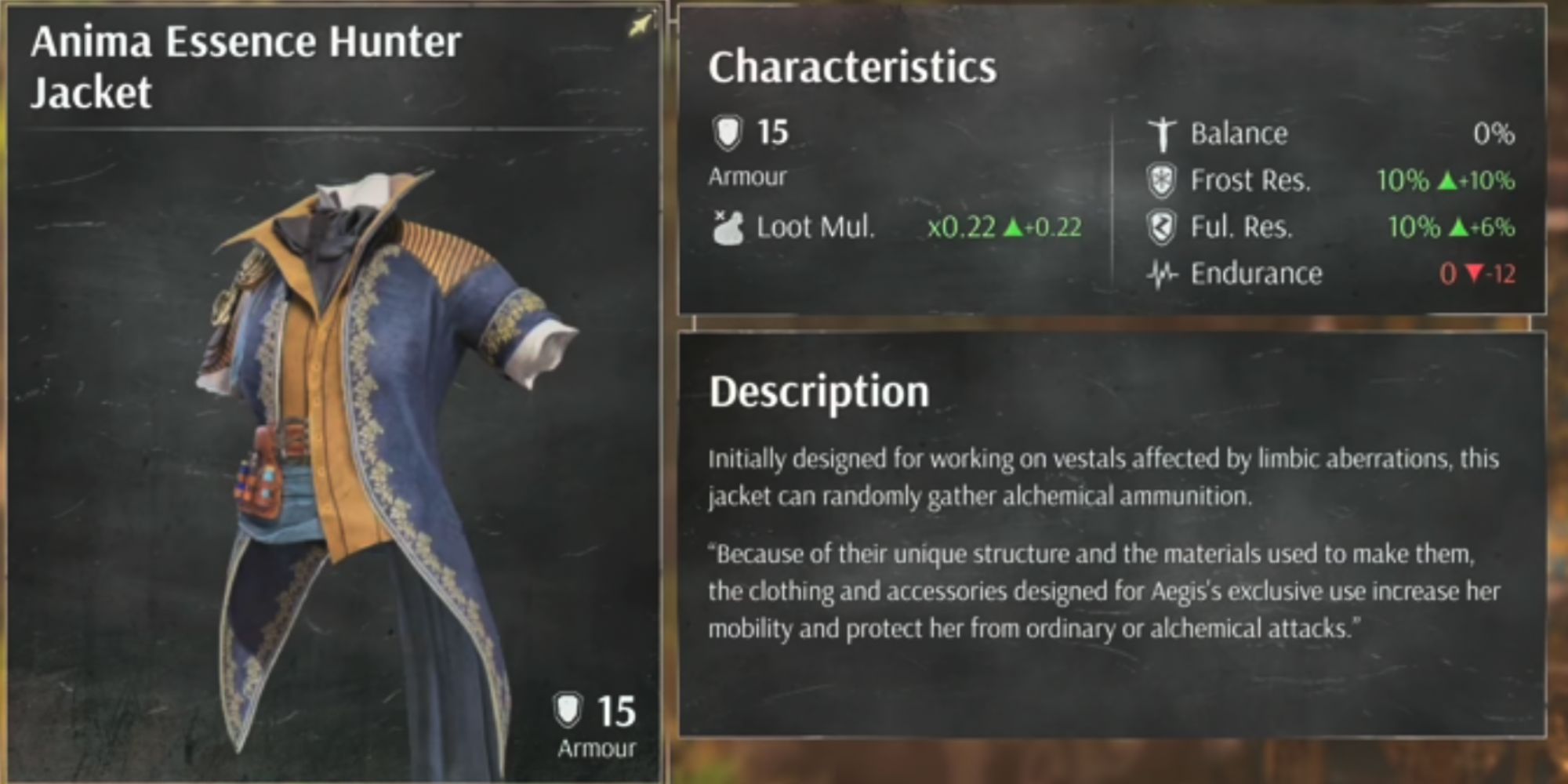 The Anima Essence Hunter set is both stylish and practical. This deceptively simple jacket seems fit for an especially clever revolutionary who always knows what to bring to a mission. This armor gives Aegis a cool, experienced look no matter the situation. This armor also seems like a perfect match for ranged weapons like the Charleville 1789 Shield Musket or even the Fire Chain. Keep your enemies at a distance while planning your next move with this outfit for today’s most calculating automatons.

Since it’s “New Game Plus” armor, the Anima Essence Hunter set cannot be acquired until you’ve already completed the game once. That said, adding the Essence Hunter armor to your collection is actually very straightforward. You can simply buy it from the shop during your second playthrough — assuming you have enough Anima saved up. 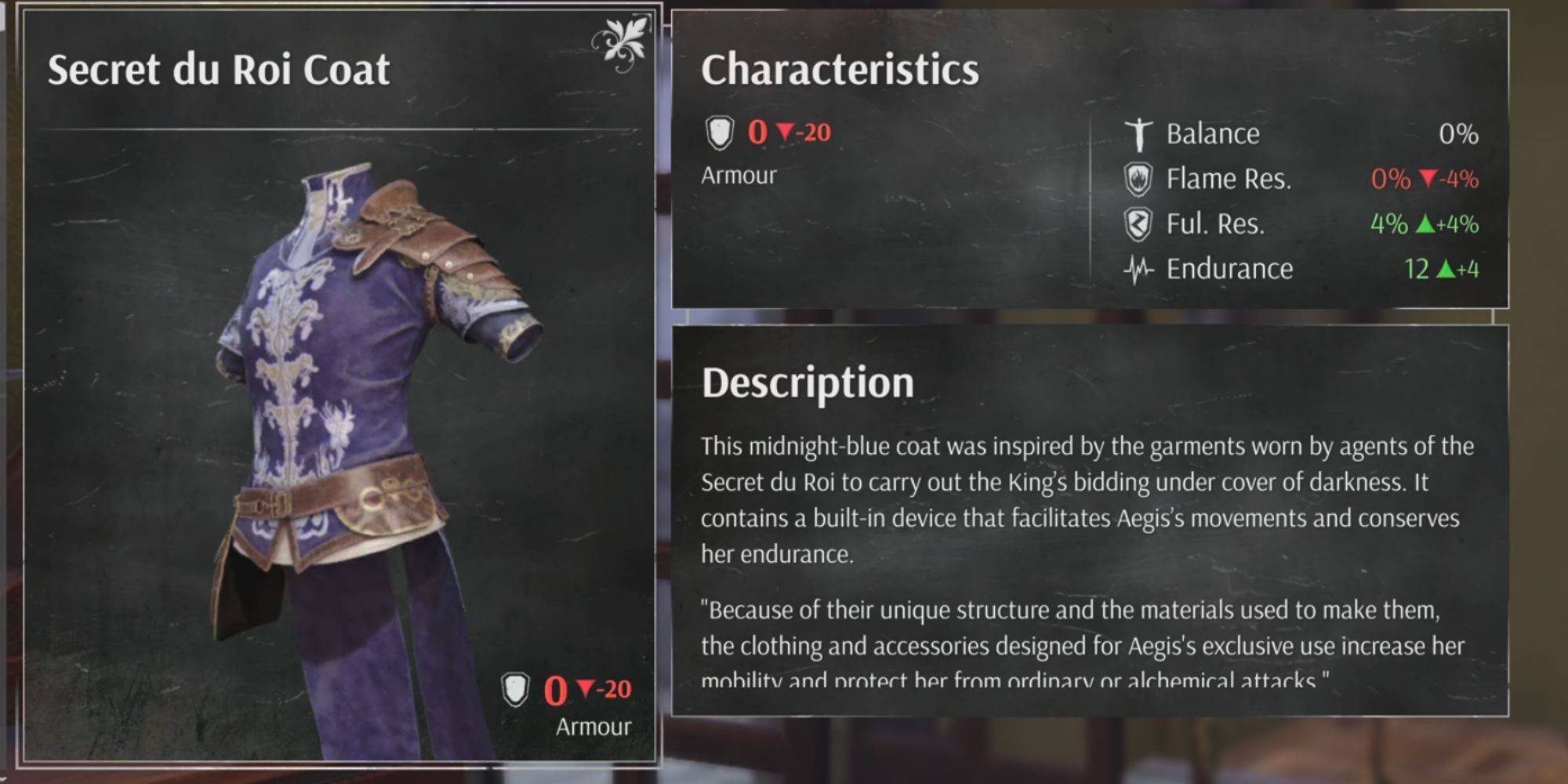 An outfit tailor-made for an assassin, the Secret du Roi set seems to combine elements of Eastern and Western design. This equipment is both lightweight and lethal. A venomous blue fabric is contrasted by sharp armor over the left shoulder. Blending in with the night, this armor encourages a delicate, fatal playstyle. Try equipping Aegis with a nimble weapon such as the Falchion and Sabre, then dance around your enemies with the Secret du Roi set.

This set is one of the more complicated ones to obtain. Split into two locations, the first part of the Secret du Roi outfit is located in The Tuileries. You’ll find the culottes and shoes during Necker’s mission where there’s a breakable door near the horseless carriage that you can go through. To get the hood and coat, use the compass in Dr. Lemonnier’s office shortly after completing the Alchemist of Luxembourg boss fight.