You are here:
Home / The 7 Best Helms In Elden Ring And Where To Find Them

Elden Ring has well over 100 armor sets, more than enough to sate the appetite of even the most fashion-focused player. When it comes to helms, you're almost spoiled for choice. This diverse selection provides unique options to really perfect your Elden Bling, but some of these helms can have a significant impact on your Tarnished's power level.

They come with a wide array of effects, ranging from simple stat increases to unique buffs that can give your builds a real boost. Here are some particularly powerful helms that you should consider grabbing during your next playthrough. 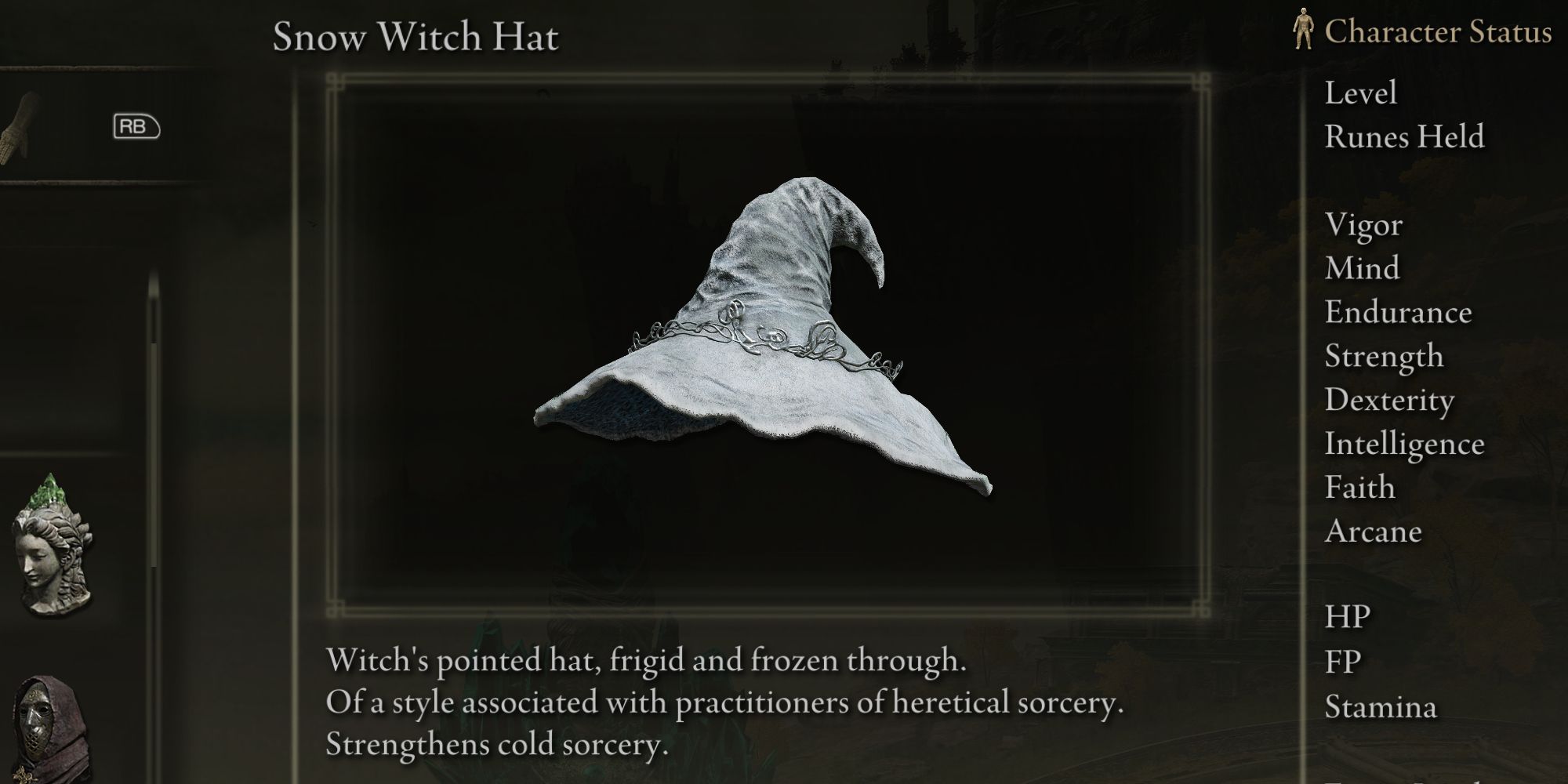 Ranni the Witch is one of Elden Ring's most complex and interesting characters. She also has a really cool hat. Fortunately, From Software lets you get your hands on it. The Snow Witch Hat, along with the rest of Ranni's outfit, can be found in Renna’s Rise after giving Ranni the Fingerslayer Blade.

Upon picking the hat up, you might be surprised to find that it buffs cold sorceries, a relatively niche category of spells. Still, a ten percent boost is nothing to sniff at, and the Snow Witch Hat is the only item in the game that buffs these sorceries specifically. With a little work, you can put together some unexpectedly effective builds.

There are still more powerful things you can do with spells in Elden Ring, but if you’re looking for a slightly different approach to sorceries, the Snow Witch Hat can go a long way toward making your efforts viable. 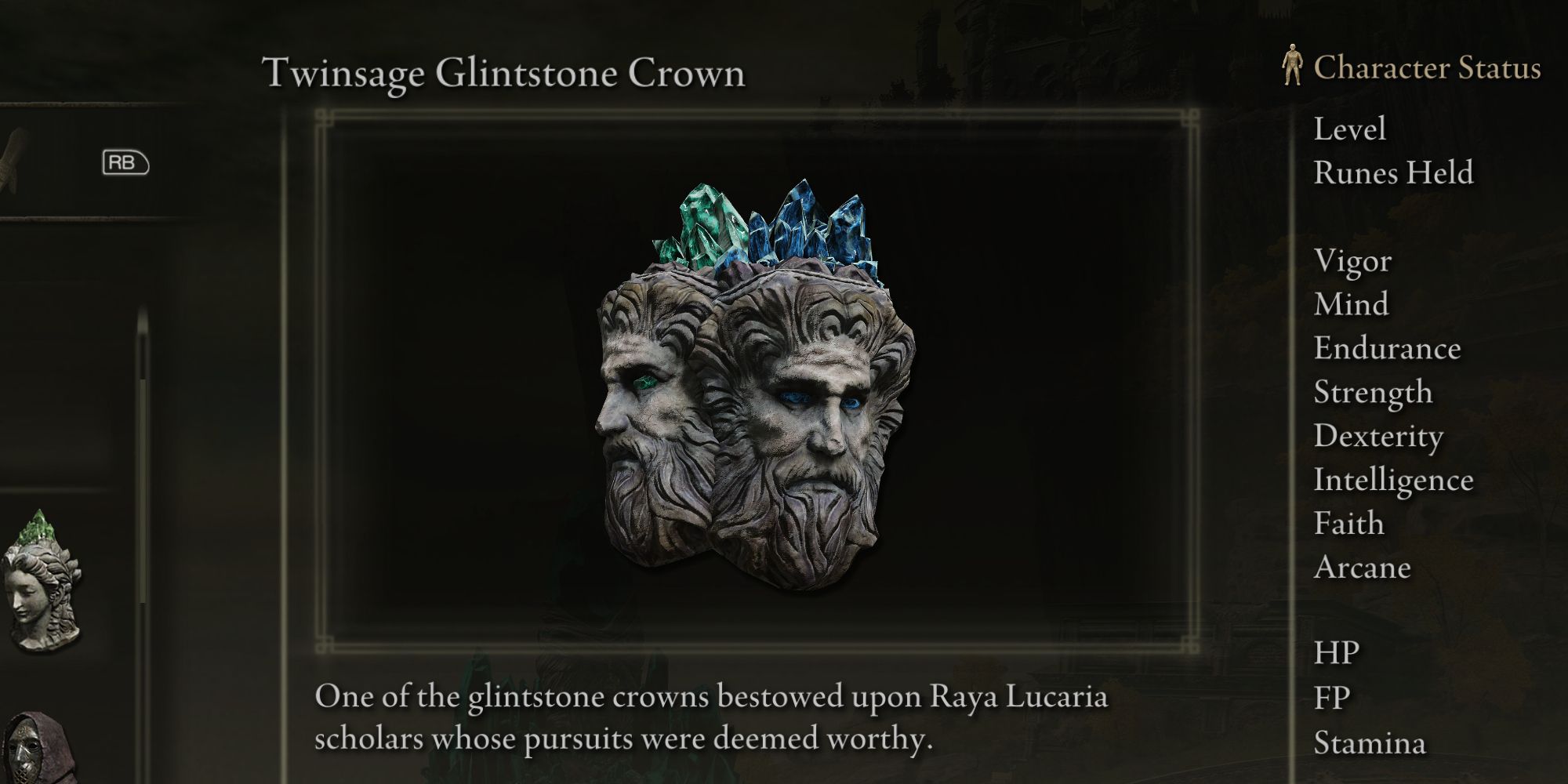 For the most part, helms that buff your statistics aren’t especially useful. Sure, they save you a couple of levels, but they often come with drawbacks. Besides, eventually you’ll reach the soft caps in those statistics anyway, at which point the helm will become effectively useless.

Still, the Twinsage Glintstone Crown, acquired by killing a crystalized crab in the Academy of Raya Lucaria, is among the best in this category. It adds six points in intelligence at the cost of a nine percent debuff to both your health and stamina. Obviously, those reductions aren’t ideal, but most sorcerers will be trying to stay as far away from their enemies as possible anyway. Why bother trying to dodge or tank hits if you’re launching powerful spells from halfway across the Lands Between? 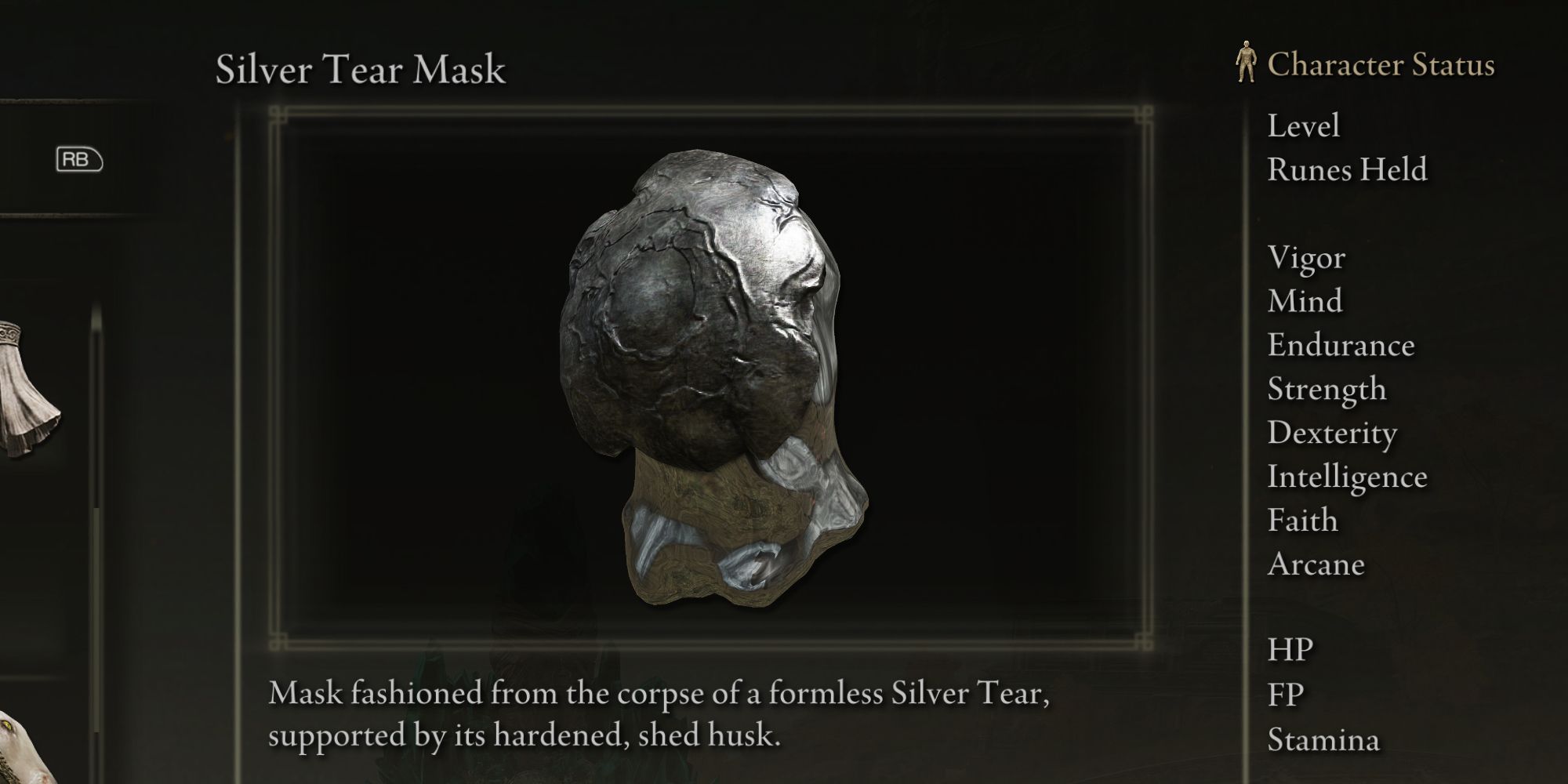 Functionally, the Silver Tear Mask is extremely similar to the Twinsage Glintstone Crown. But instead of boosting intelligence, it increases your arcane by eight. That's the largest buff to your statistics by any helm. And while I said earlier that those statistic-boosting crowns aren’t great, eight levels really do make a massive difference. The Silver Tear Mask does have a downside; its description says it gives a “detriment to physical attack power,” which sounds like a major drawback. In reality, though, it only lowers your attack power by about five percent.

Even if you’re relying on an arcane-based weapon for your damage, that decrease is likely outweighed by those eight levels of arcane if you haven’t hit the soft cap yet. And since the debuff doesn’t affect incantations or skills, certain builds won’t be bothered by it at all.

Until you reach the highest levels of play, the Silver Tear Mask can be a real boon. To get it, kill the Mimic Tear boss in Nokron, Eternal City. 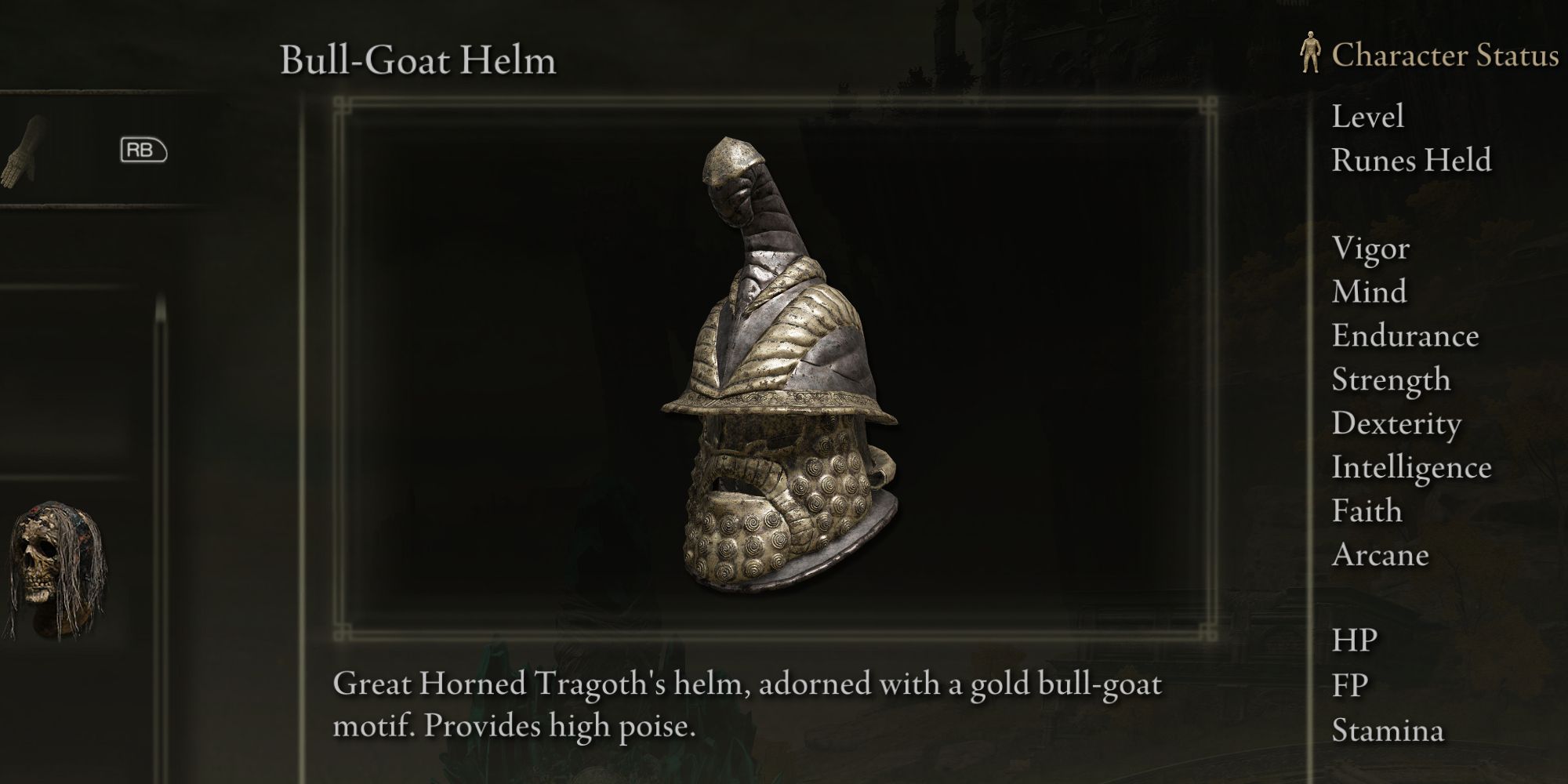 Unlike the other helms on this list, the Bull-Goat Helm doesn’t have any special properties. It's just a plain—if somewhat goofy-looking—helmet. What it does have is the highest poise value of any helm in the game, at 15. And while some builds don’t care at all about poise, others want to get up close and personal with their enemies. In that case, being able to avoid being staggered by their attacks can be extremely important.

The Bull-Goat Helm might not be the most exciting option, but if you’re trying to poise through absolutely everything possible, you want it on your head. To acquire it, go visit your trusty friend Patches at Volcano Manor. He'll ask you to invade and kill Great Horned Tragoth near the Ruin-Strewn Precipice. Tragoth will drop the helm, along with the rest of his armor set. 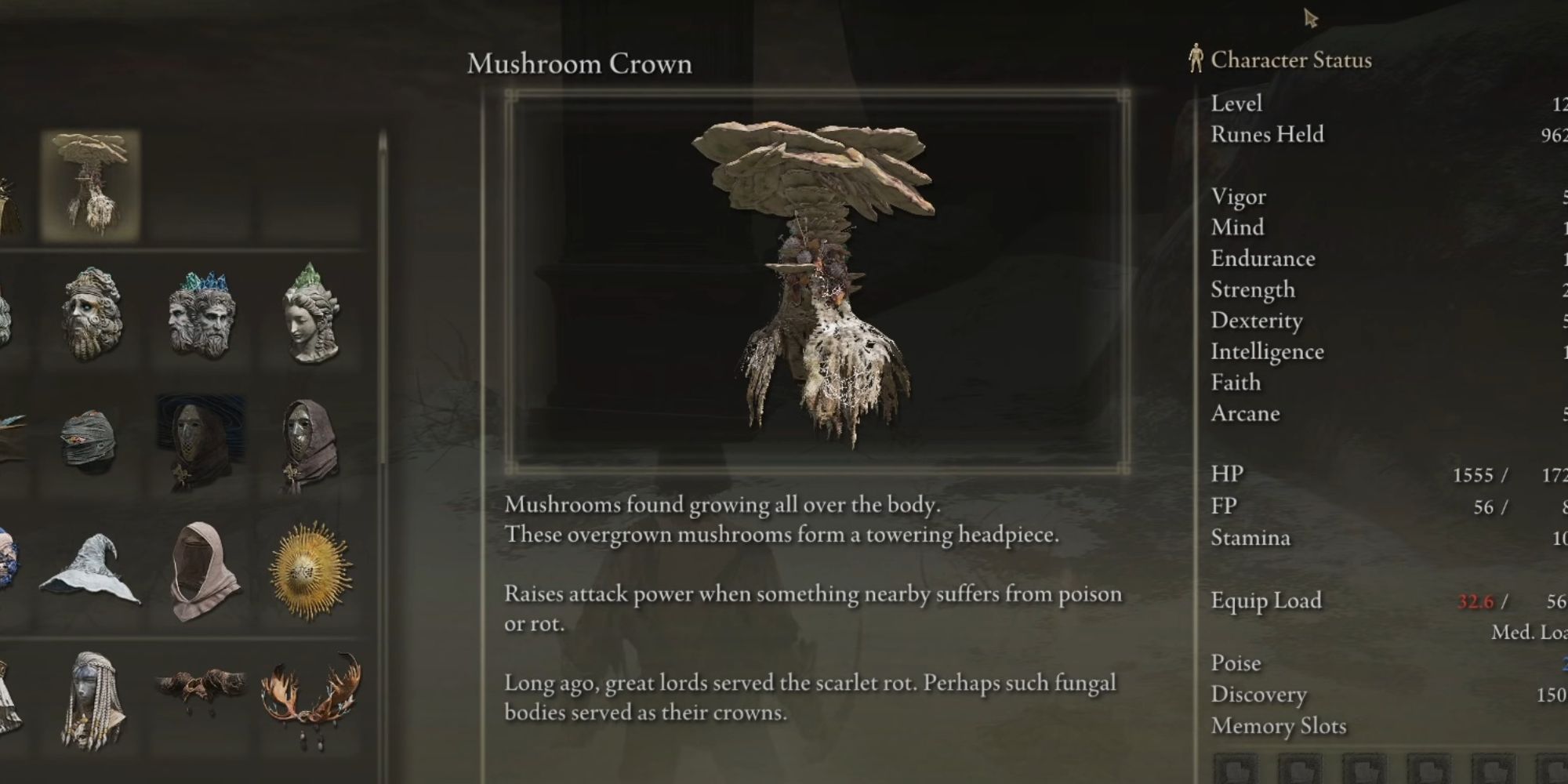 The Mushroom Crown is one of the more outlandish helms in the game. Aside from allowing you to run around with a giant mushroom on your head (arguably worth it on its own), the Mushroom Crown gives you a ten percent damage buff for 20 seconds any time something nearby suffers from poison or scarlet rot.

The most obvious use for it is to combine it with the Kindred of Rot’s Exultation talisman, which gives an additional 20 percent damage buff when poison or rot are around, and then using a weapon that inflicts one of those status effects.

Unlike most status effects, poison is relatively easy to trigger on yourself either by eating Raw Meat Dumplings or throwing Fetid Pots. And both the Mushroom Crown and the Kindred of Rot's Exultation will count you as a trigger for their effects, which means you can go into fights with a thirty percent damage increase already activated.

Whatever method you use, the Mushroom Crown will be a crucial part of your build. Unfortunately, getting it requires wading through the Lake of Rot. Assuming you're willing to brave the rot swamp and its basilisks, you'll find the Mushroom Crown on some rubble in the southeastern corner. 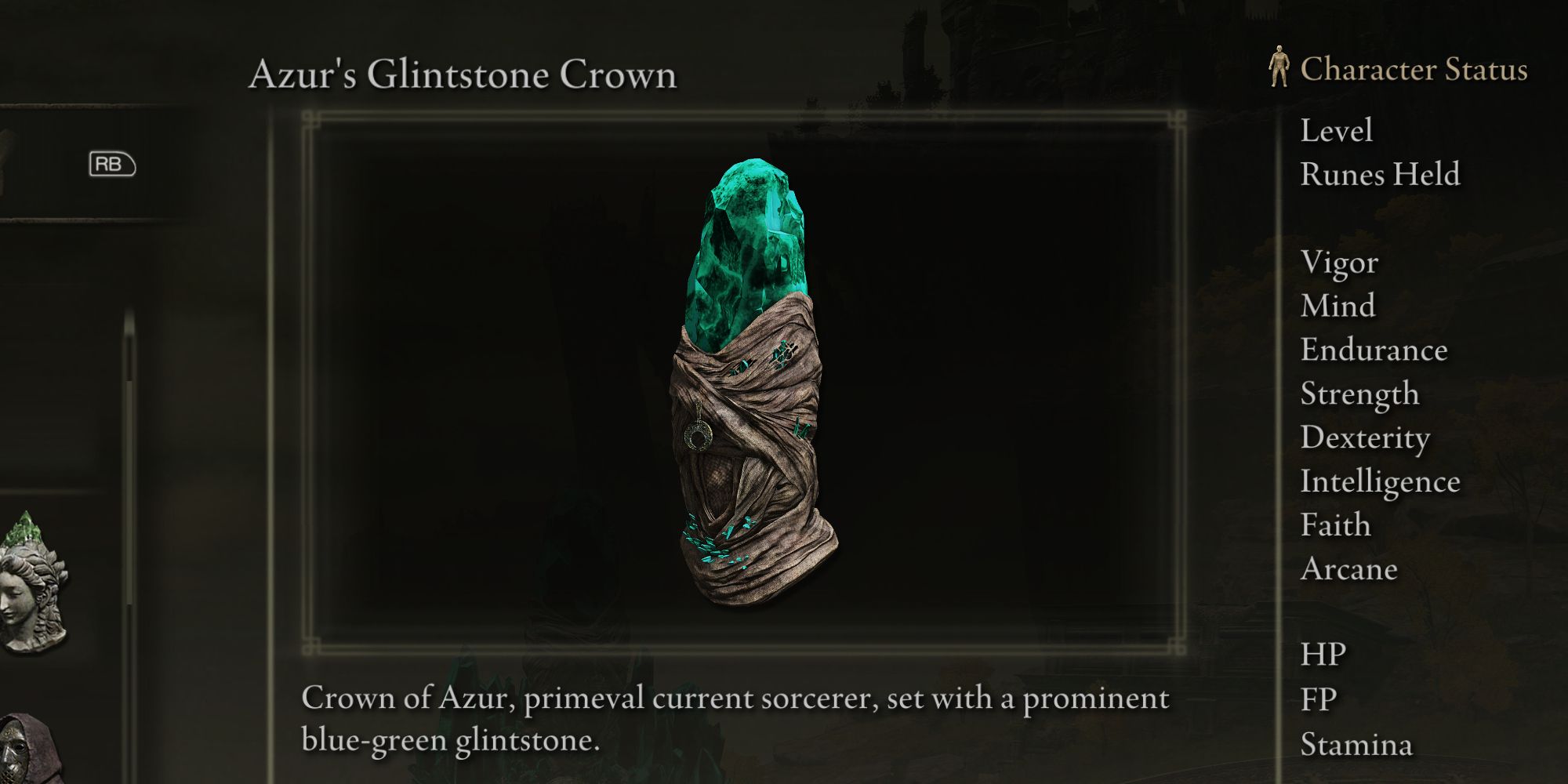 Azur’s Glintstone Crown is a case of an item that is only useful in extremely specific scenarios, but in those cases it is game-breakingly powerful. The crown increases the damage of three spells: Comet Azur, Glintstone Cometshard, and Glintstone Comet, but those boosts come with a major downside: increasing the FP cost for all of your sorceries by 15 percent.

Under normal circumstances, that would not be a worthwhile tradeoff. Late in the game, you can compensate by putting more levels into mind, but where the Crown really shines is when combined with the Cerulean Hidden Tear for your Flask of Wondrous Physick. The tear negates all FP costs for fifteen seconds, meaning you can cast Comet Azur for free, even while wearing the crown and using other buffs that increase FP costs.

15 seconds of fully buffed Comet Azur will one-shot certain bosses, and do immense damage to any boss that stands still (or can be staggered) for a significant amount of time. Azur’s Glintstone Crown is effectively the cherry on top of your laser turret.

To get it, you’ll have to finish Sorceress Sellen’s questline, then return to the spot north of Hermit Village where you first met Primeval Sorcerer Azur. There, you'll be free to loot the helm from his corpse. 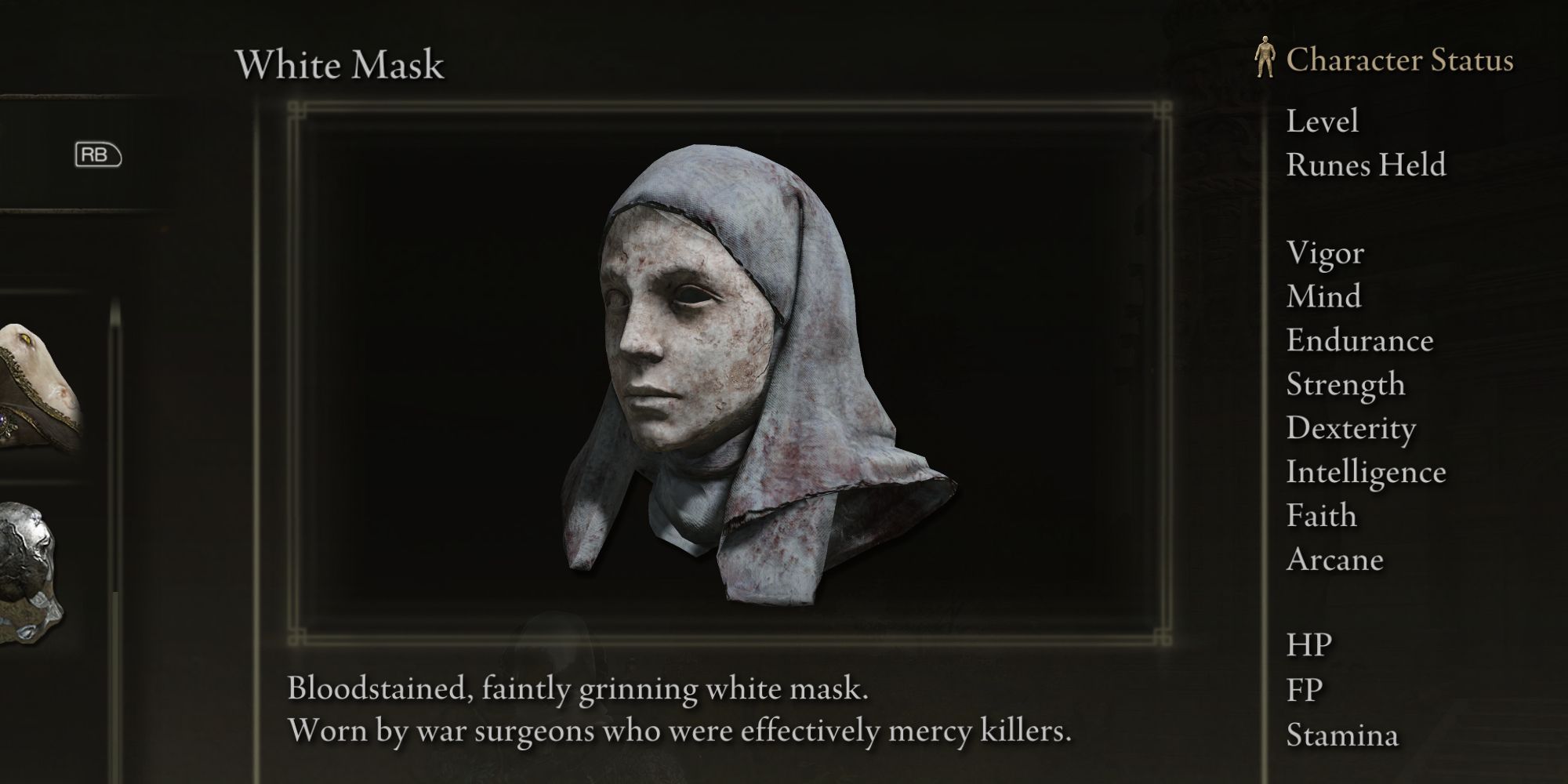 Anyone who has ventured into Elden Ring’s PVP scene knows how powerful bleed builds can be. The phrase "Rivers of Blood" likely sends shivers down their spine. And these builds are among the most powerful in PVE as well. If you want to join the ranks of those already crushing their enemies in Elden Ring, you'll need the White Mask.

It raises your attack power by ten percent for 20 seconds after blood loss has been inflicted in the area. It's the exact same effect as the Mushroom Crown, but for blood loss instead of poison and rot. And unlike those other two status effects, blood loss is extremely easy to proc. Plus, it deals its damage all at once, rather than over time.

Interestingly, you don’t actually get the White Mask from White Mask Varré, the first NPC you see wearing it. Instead, it drops from one of the Nameless White Masks who invade you in the swamps of Mohgwyn Palace. Be careful, though; they won’t invade you if you’ve already killed Mohg, Lord of Blood.

It's somewhat ironic, really. If you kill the Lord of Blood too early, you won't be able to access the full power of his domain.