You are here:
Home / Teldryn Sero Is Skyrim’s Greatest Companion

When you first meet masked mercenary Teldryn Sero, he makes a compelling case for recruiting him. He claims to be the best swordsman in Morrowind, promising "swords, spells, and other surprises" to any adventurer willing to pay his 500 gold fee. If you oblige and take your new follower into a dungeon, that surprise takes the form of a powerful, fire-spewing Flame Atronach. This is just one reason I never travel anywhere in Skyrim without him by my side.

You can find Sero in Raven Rock, in the Retching Netch pub. He sits patiently by the fire waiting for a client to hire him, but his chitin armour—made from the hard shells of giant ash-dwelling insects—is a clue that he'd much rather be on the road fighting alongside a fellow warrior. From the moment I saw him, I had to hire him. I didn't know anything about him, but that bug armour looked so damn cool. It was a superficial decision, but I was amply rewarded for it.

You get a lot for your 500 gold. Sero is, as promised, a talented swordsman. He's equipped with an Elven sword and is the only follower in Skyrim with the Armsman perk, significantly boosting his one-handed attacks. He's pretty handy with magic too. As well as summoning the aforementioned Flame Atronach, he enjoys nothing more than toasting enemies with Flames and Firebolt spells. In battle he'll alternate between his blade and destruction magic, making him very handy in a scrap. 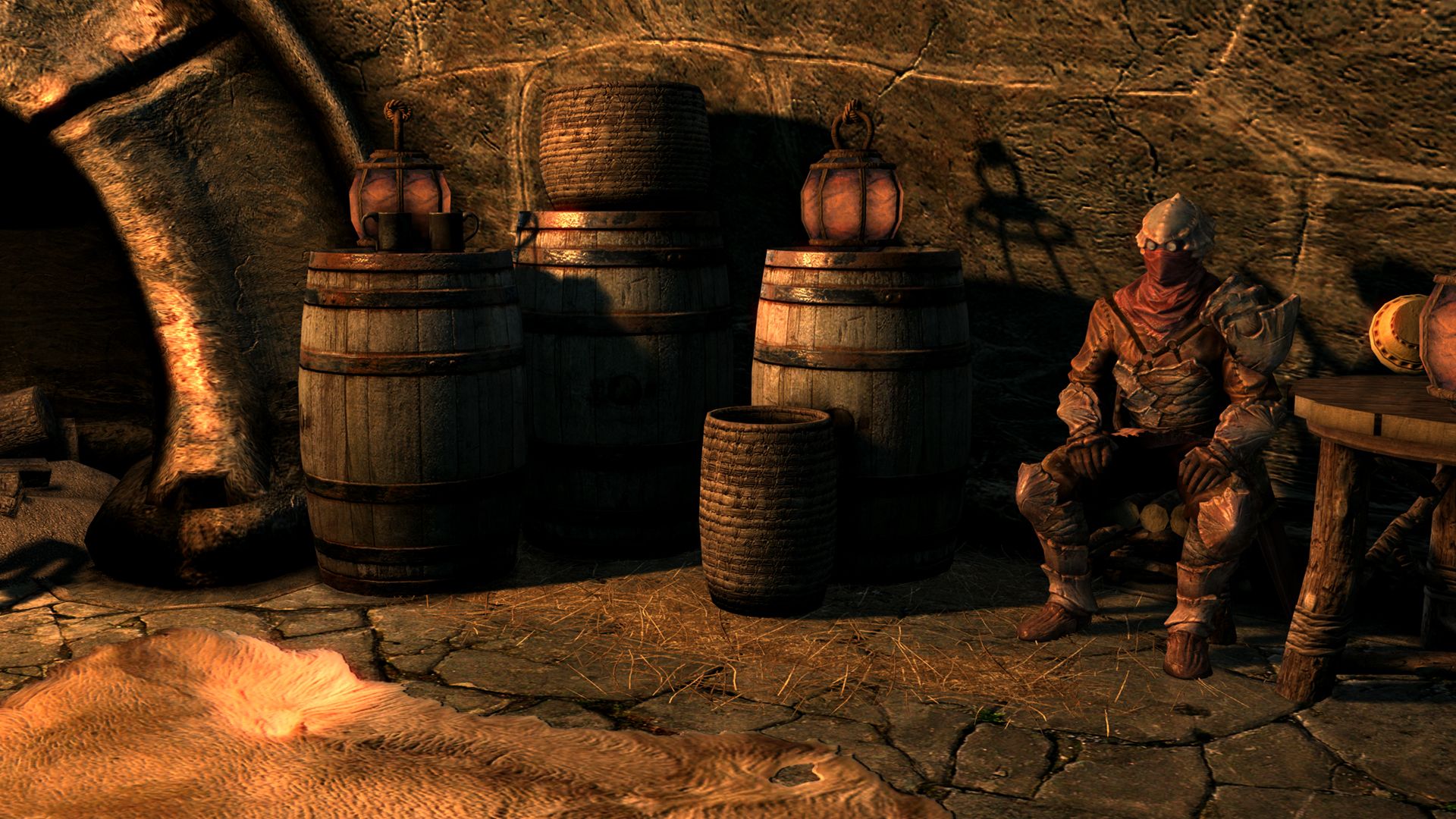 But there's more to Sero than combat prowess: he has a personality too. Skyrim followers usually have little to say about the places you drag them to, but this guy is incredibly chatty and regularly comments on his surroundings. He's a Dunmer, and as such has an affinity for Morrowind, which often creeps into his dialogue. You never see his face either, to the point where he refuses to wear head armour that doesn't fully cover it. A small touch that gives his character a wrinkle of mystery.

He'll marvel at the College of Winterhold, daydream about settling down in Riverwood, and talk about the hard years he spent living in Windhelm's Gray Quarter. In Dwemer ruins he'll wonder about what the mysterious lost race was like, curse vampires in their lairs, and point out the telltale stench of nearby giant camps. In Skaal Village at the freezing northern edge of Solstheim he'll wonder how the locals can stand to live in such an inhospitable place. He always has something to say.

This makes Sero feel like a proper companion, not just an emotionless mannequin blindly following you around. He even has a brief but interesting backstory, revealed by talking to him. But a lot of the character's charisma and charm comes courtesy of voice actor Dan Donohue, who plays him with a likeable, weary warmth that is a joy to listen to. He's a classic example of a well-travelled, battle-hardened merc with a deep knowledge of the world and a wise perspective on it. 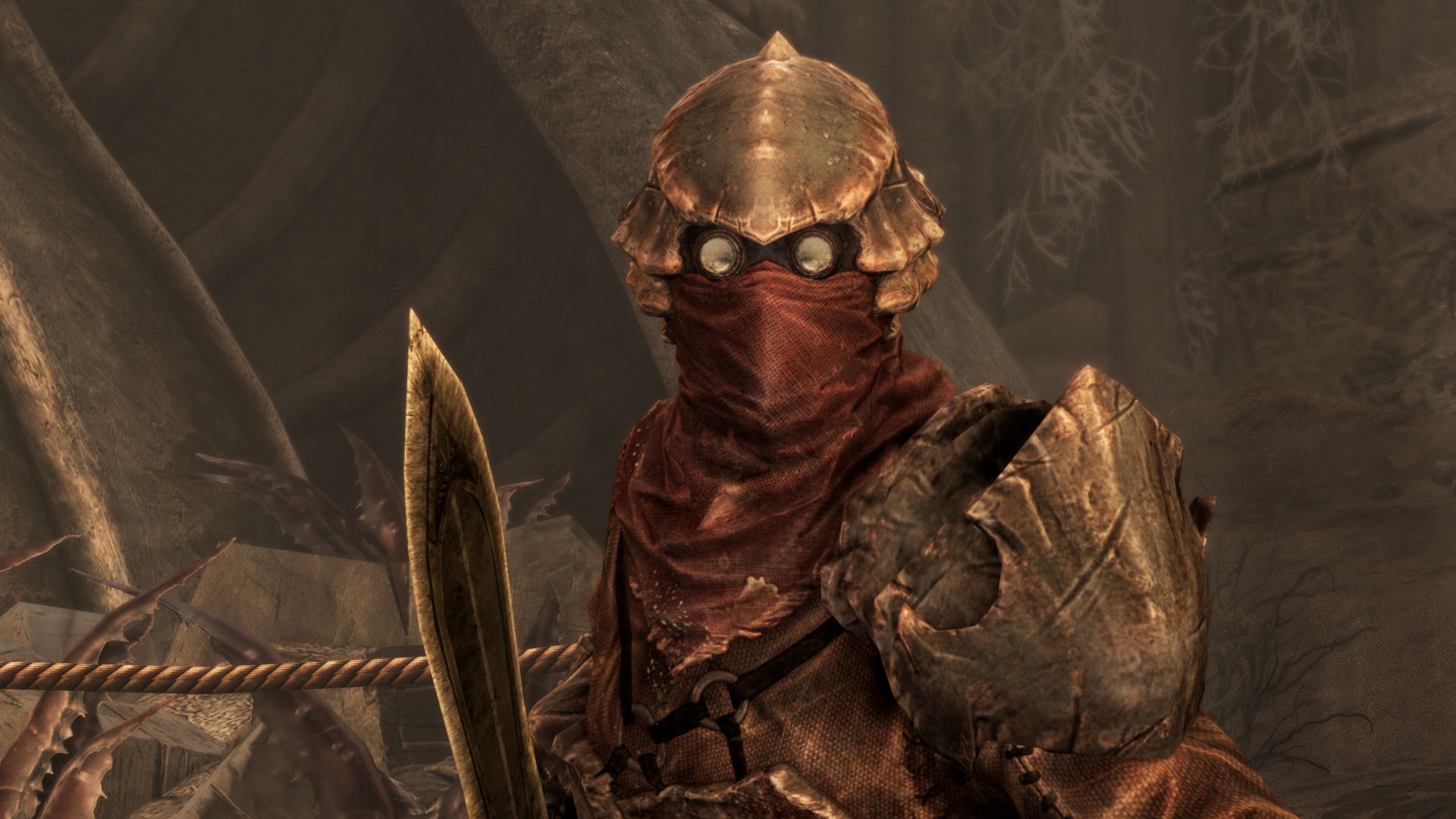 I'll often get frustrated and dismiss followers in Skyrim because they have a maddening habit of getting in the way when I'm swinging my sword, or stumbling stupidly into traps. But I'm willing to put up with the, let's say, idiosyncrasies of Bethesda's companion AI in Sero's case. He's just really fun to hang out with, and brings a bit of colour to questing. I just wish Bethesda had written more dialogue for the character, because after a while he starts to repeat himself and certain lines become too familiar.

This inspired a mod called Teldryn Sero Dialogue Expansion, which uses voice synthesis software to give Sero over 200 new lines of dialogue. The AI-generated voice isn't perfect, but it's an impressive mod nonetheless. Sero has a lot of fans in the Skyrim community, and there are other mods dedicated to him including a quest that expands on his backstory and, inevitably, a mod that removes his helmet and reveals his face. I prefer to keep it on, though. For me, the mask is part of the appeal.

Teldryn Sero is my go-to follower whenever I play Skyrim. Without him battles feel oddly drab and empty. I need him there slinging fireballs, conjuring Atronachs, impaling enemies on his Elven sword, and commenting on whichever dingy crypt I've forced him into. Skyrim's followers are pretty basic compared to other RPGs, which is something I hope Bethesda expands on in The Elder Scrolls 6. If my man Sero makes a return, depending on when it's set, even better.