You are here:
Home / Tekken’s Kazuya proves Smash Bros. Ultimate is a great fighting game after all

Tekken’s Kazuya proves Smash Bros. Ultimate is a great fighting game after all 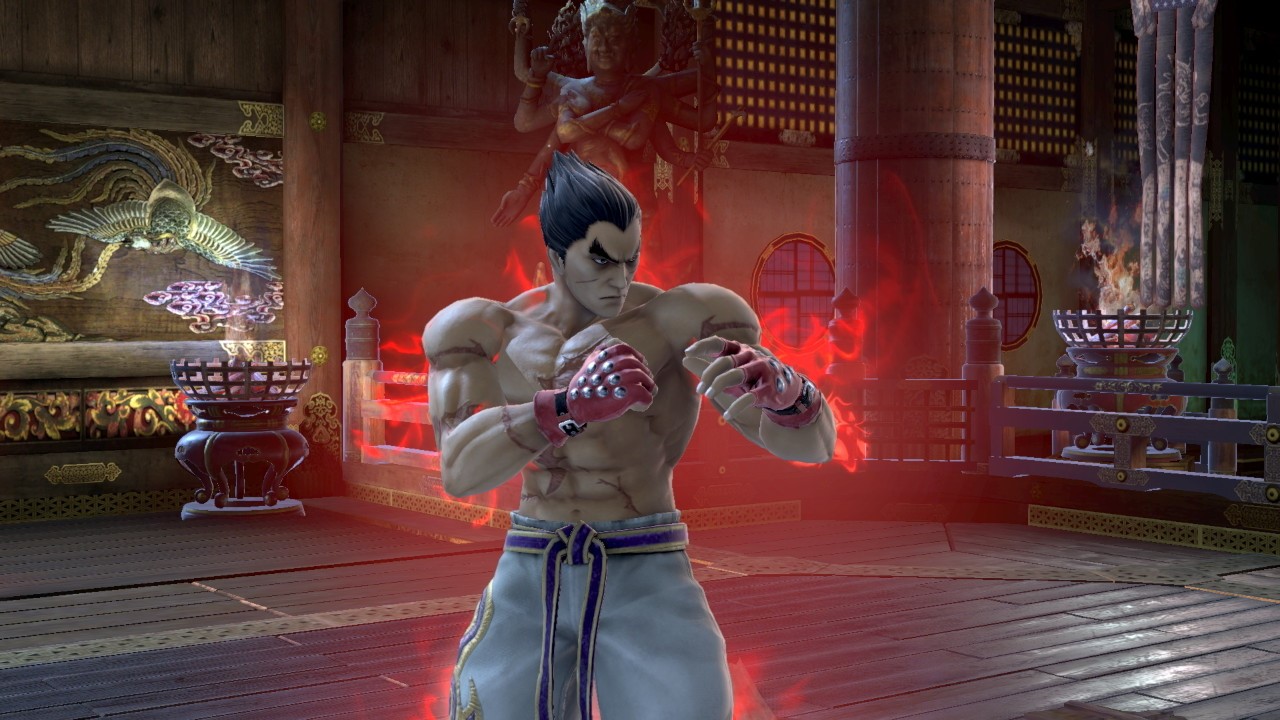 As Kazuya from Tekken arrives in Super Smash Bros. Ultimate, GameCentral gives its verdict on one of the game’s most complicated fighters.

Already the king of crossovers, Super Smash Bros. Ultimate has also become the definitive venue for scraps between fighting game titans. Street Fighter’s Ryu and Ken, Terry Bogard from Fatal Fury, and Tekken’s hyper-ripped mascot Kazuya Mishima can now bump fists across the Mushroom Kingdom. The only major franchise that doesn’t have a representative is Mortal Kombat, which will likely miss the party unless creator Masahiro Sakurai takes his final bow with Mario’s head on a pike.

Kazuya Mishima is the fifth addition to Fighters Pass Vol. 2 and he boasts the same overwhelming, microscopic attention to detail as previous DLC fighters such as Minecraft’s Steve and Min Min from ARMS. Even next to Terry Bogard, who has an impressively distinct fighting style befitting the character’s origins, Kazuya is a step above in blending existing mechanics with elite fan service.

Whereas most characters in Super Smash Bros. Ultimate can be figured out on the fly – hitting the standard special move inputs and working out when best to unleash attacks – Kazuya may be the first time you’ll feel compelled to open the moves list. He has the most attacks of any character, many being taken directly from Tekken, although they are simplified. You can just hold ‘A’ to pull off a 10-hit combo, but others require specific directional inputs and timed button presses reminiscent of Tekken’s traditional fighting game mechanics.

Like any Smash character, Kazuya’s moves are still split between special and basic attacks. His specials revolve around his villainous alter-ego Devil Kazuya, which grants him flight, a dash punch which stuns, and a thin laser beam borrowed from R.O.B. They’re useful but compared to the flexibility in his normal attacks they’re also strangely underwhelming. Unlike the rest of the roster, Kazuya’s basic moves utilise eight input directions instead of four, meaning there’s more variety in his punches and kicks than anyone else.

It’s a complex move-set for Super Smash Bros. Ultimate but it’s nowhere near the depth of Tekken in terms of the inputs and the moves at your disposal. As an abridged version though, it’s an impressive translation of Tekken’s foundations. There’s always been the argument of whether Super Smash Bros. should be classed as a fighting game or not, with many believing it’s too mechanically different to fit the bill (even Sakurai has rebuked the claim). Kazuya’s treatment here though feels like an ideal on-boarding exercise for anyone intimidated by traditional fighting games.

In the chaos of Smash, some of Kazuya’s intricacies don’t translate well. Combos are difficult when pokéballs, stage hazards, and multiple players can interrupt from every direction. His saving grace in these moments is how much damage he can inflict in a short window, especially with clearing moves like Wind God Fist and down-B special Heaven’s Door – where he swoops an enemy before slamming them into the floor.

These moves also power up into Rage Drive when you’re either over 100% damage or below 25% stamina, boosting the attack by 10%. Even with his extra power though, he doesn’t feel designed to cope with Smash’s mechanics at maximum frenzy.

Kazuya shines when items are off and hijinks are reduced. In fights against one or two opponents he’s one of the most compelling fighters to master because of his flashy pay-offs. Grab moves in 1v1 matches cause the camera to zoom and spin before blasting away your opponent, like Tekken’s dramatic camera turns.

On his Mishima Dojo stage, where Heihachi lurks in the background, smash attacks blow enemies through walls and ceilings with thunderous impact. Screeching finishers have always been part of Smash’s DNA, but there’s extra satisfaction when it lands after a well-timed combo string.

To see Kazuya’s full potential turn to the enemy AI. Even professional Super Smash Bros. Ultimate players are having a tough time against level 9 Kazuya, to the point where he’s already gained borderline meme status. He’ll likely be heavily nerfed in an upcoming update, as most DLC characters are following release, but for now his CPU version is both a worthwhile teaching vessel and a source of utter brutality.

Just like Minecraft’s Steve, Kazuya brings a new, more considered dimension to Super Smash Bros. Ultimate’s combat. He won’t be a favourite at chaotic parties, where the distractions make Kazuya more frustrating than deadly, but he’s certainly one of the most mechanically memorable characters amongst the DLC additions.

With only one position left in Fighters Pass Vol. 2, which Sakurai has promised is the final one ever, this feels like a fitting bookend for the fighting games crossovers – tipping the hat to the genre by making Tekken’s difficulty quirks as inviting and satisfying as possible.