You are here:
Home / Stray’s Guitar Robot Is The Heart And Soul Of The Cat Simulator

Stray is a beautiful game, and I particularly love The Slums. The relatively small area has been painstakingly designed so it not only feels like a real city – the first hurdle at which most games fall down – but also feels much bigger than it is. Part of this comes from the twisting alleyways and shortcuts that only cats could take, through ajar windows and across narrow walkways. More of that presence comes from the verticality, and the fact that traversing the rooftops feels like being in a whole new world compared to traipsing around on the floor.

Stray’s clever platforming would be meaningless, however, if there was nobody to make the underground city come alive. And with all the humans long gone, it comes down to the robots who inhabit this Kowloon-inspired city to bring it to life. Despite the fact that you’re the only living creature in The Slums, the robots have created a small society down there, and are living their best robot lives long after the humans that created them have perished.

There’s a robot bar where a robot called Seamus is drowning his sorrows. There are houses, complete with hanging beads, beds, and TVs as though robots need any of those things. The robots themselves wear clothes, mimicking the humans that made them as a way of coping with their loss. Seamus dresses as Marty McFly and his dad, Doc, as (you guessed it) Doc, so they have some recognition of popular culture too. Or at least popular culture from a few decades ago. They celebrate a retrofuturistic ‘90s aesthetic, which is presumably when Stray’s humans first disappeared. 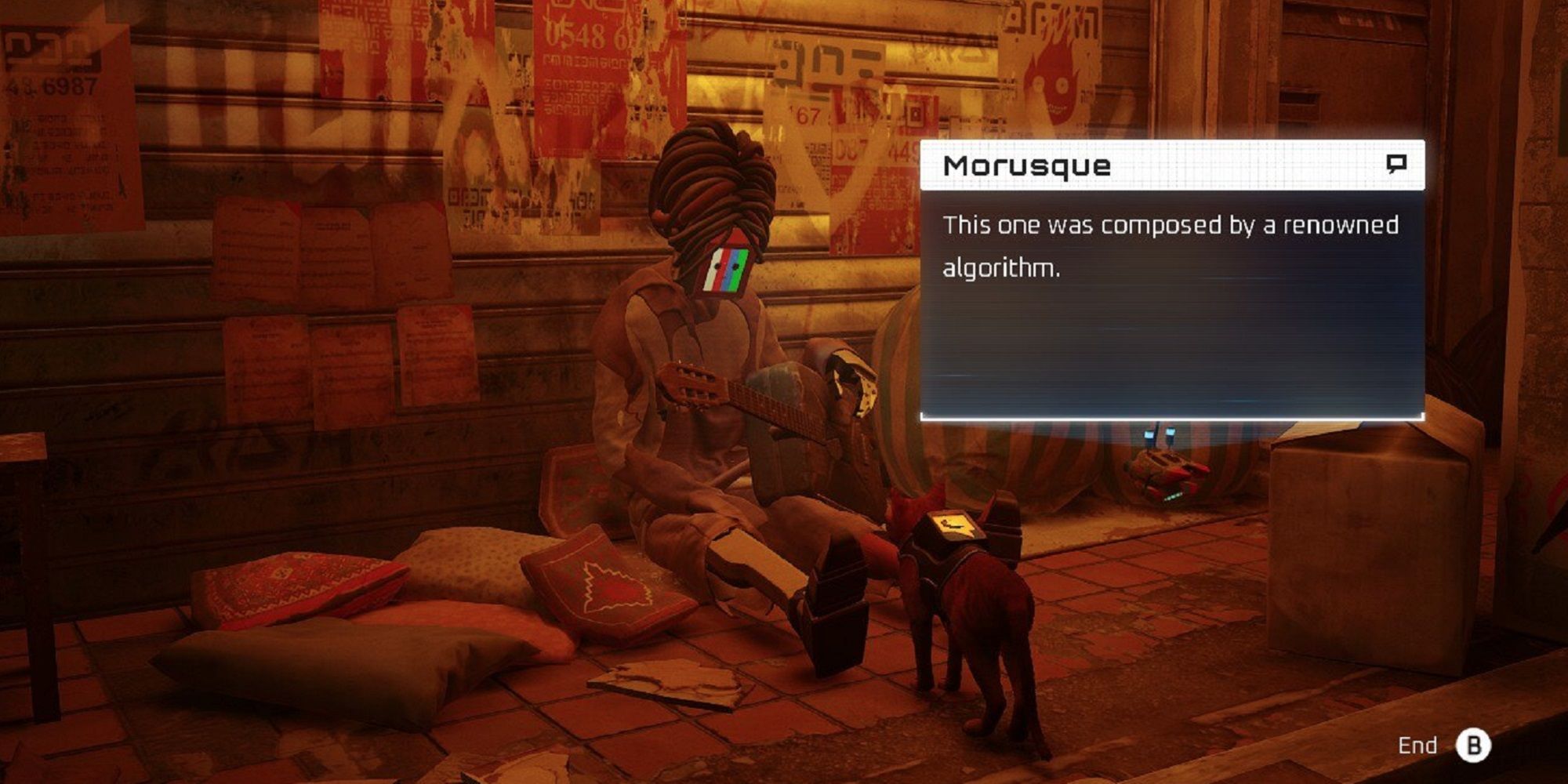 The fact that the robots have achieved sentience and try to mimic their human creators is a given in Stray, it’s normal. For us, a cat from above ground who quite literally fell into this world, this might be the only city we’ve ever seen. The robots talk and play and get drunk and have arguments, they’re essentially, emotionally, human. But there’s one man, one robot, who embodies this more than anyone else.

Morusque is a chilled out robot trying to learn the guitar. He wears dreadlocks made out of wires and a loose fitting shirt, his guitar is made out of a repurposed jerry can, and his tunes are 16-bit approximations of the sheet music you find around the town. I’m not unconvinced that he doesn’t sing these tunes himself, hence the robotic sounds emitting from his strings.

In 2004, Will Smith asked, “can a robot write a symphony?” Morusque can’t, but algorithms can. ‘Mildly important information’ is a chilled out number and a personal favourite – mostly because is sounds like it could soundtrack a cyberpunk Zelda game – was composed by a “renowned algorithm,” suggesting not only that an algorithm wrote this tune, but that it wrote many such songs and gained a reputation and following due to its skill doing so. Will Smith may not be able to write a symphony (at least not in I, Robot), but algorithms can. I assume that’s how Ed Sheeran writes his tracks, too. 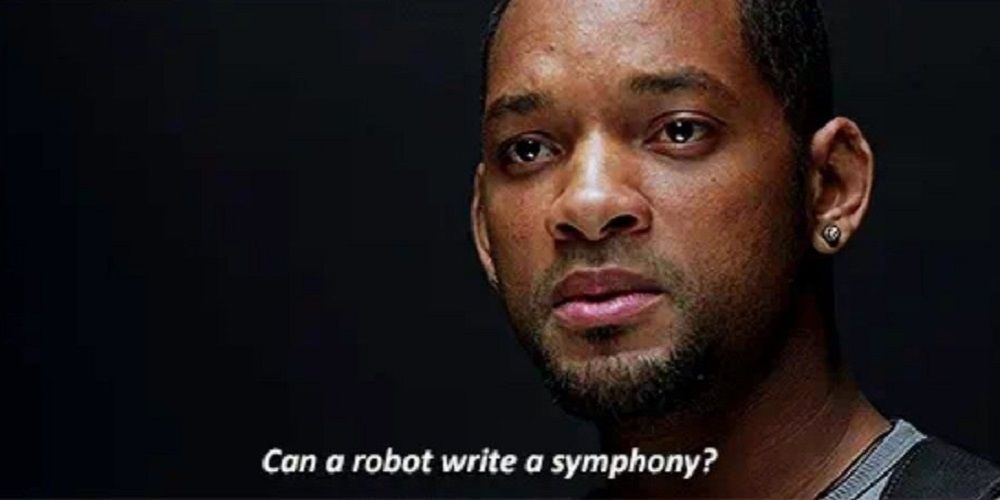 Algorithms aside, Morusque strums his little tunes and puts out a pillow for you to take a nap on. It’s a relaxing place to sit in the bustling town, and I enjoyed just spending a few minutes there and listening. Morusque is the heartbeat and the soul of The Slums, but he embodies the relationship between robots and their human forebears more than any other.

Morusque is desperate to copy the humans, going as far as modelling a precariously balanced hairstyle atop his metal head. On top of wearing human clothes as idolising human aesthetics like the other robots, he wants to make music like them, to be like them in any and every way possible. Humans in science fiction are often defined by their creativity, by their ability to make music and poetry. A robot could never be Tolkien or Plath, Hendrix or Cobain, they don’t have the heart – figuratively and literally. But Morusque will be a pretty good tribute act, and he’s the heart of Stray.