You are here:
Home / Stray: Who Are The Outsiders?

Stray: Who Are The Outsiders?

Stray is virtually impossible to dislike. Prowling the streets of a post-apocalyptic walled-in city and aided by a talkative drone bot, you play as a ginger tabby cat who spends his time snoozing, solving puzzles, and evading bloodsucking rodents on a mission to reopen the cement skies above.

Beneath the soft ginger fur and neon-lit landscapes is an inherently dark, gritty core. Your quest is governed by the inspiring notes of The Outsiders – the last remaining creatures who once lived beyond the city's confines. But who are they, and can we piece their stories together using context clues?

This feature contains spoilers for the ending of Stray – read at your own risk!

The Outsiders: Momo (The Slums) 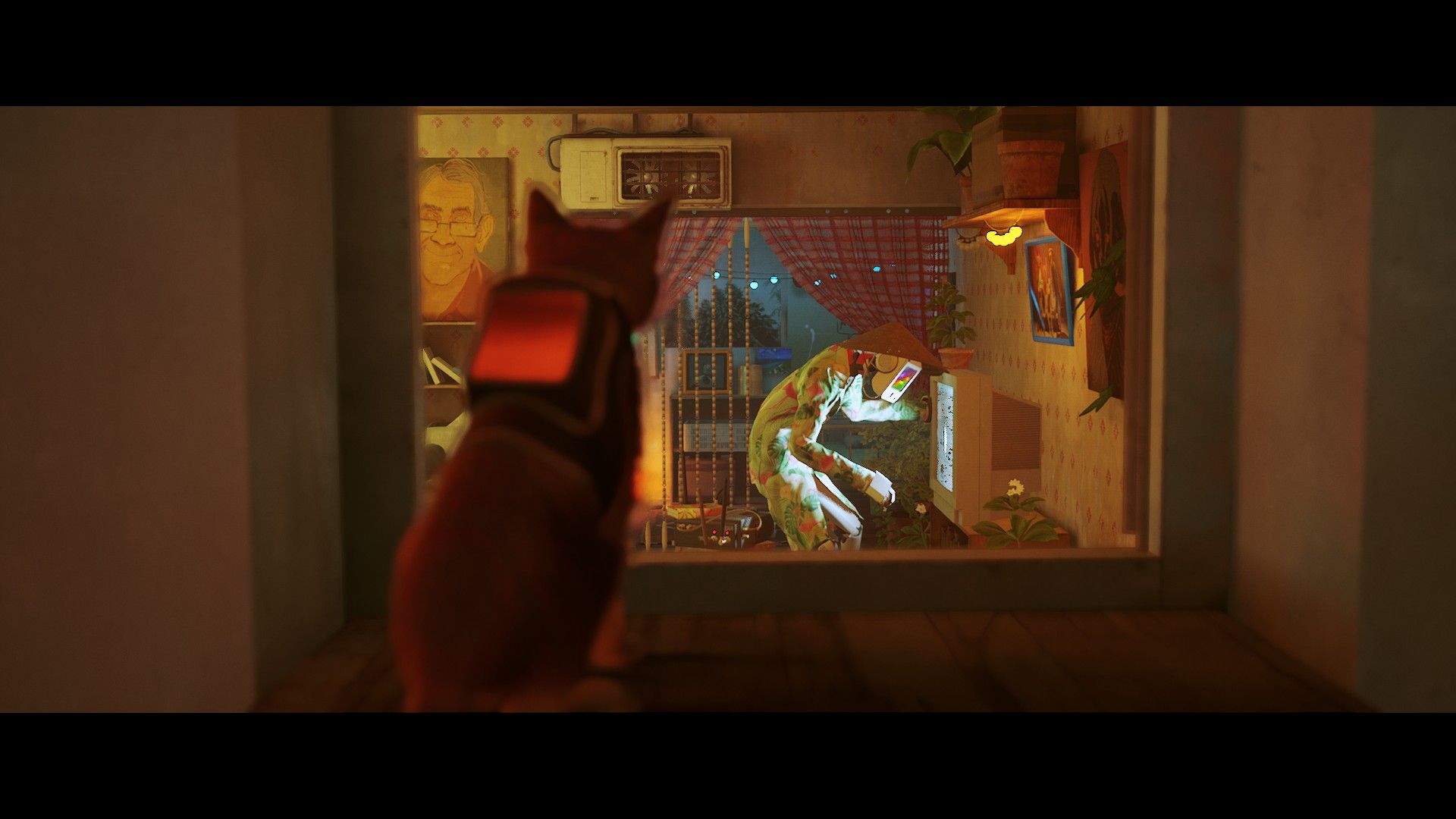 Momo is the first Outsider you meet on your journey back to the surface. His rooftop apartment in The Slums is indicative of his character; with twinkling Christmas lights adorning the curtain rails as a nod to the faded memory of human traditions, Momo is ready to surrender all hope of escape as the last remaining Outsider in this neck of the woods.

Like his fellow robots, Momo wears human clothing. His straw rice paddy hat is a tacit link to the game's aesthetic inspiration of the Kowloon Walled City of Hong Kong, as are the tightly-packed residential buildings and boxy air conditioning units which, for a city of cyborgs, are probably defunct.

A State Of Limbo

Eccentric Momo is the one Outsider whom you spend the most time with, aside from B-12 if you count him (which, for the purposes of now, we do). He helps you find your footing in the confusing streets of the Slums, talking to the locals and learning snippets about the world around you which sees both the cat and Momo as suspicious, foreign bodies trapped somewhere in between belonging and displacement.

This itself is not unlike the attitude of Walled City residents to those who lived in mainland Hong Kong. A self-governed city state that found itself above the Basic Law, most locals were fundamentally disinterested in the world outside the Walled City. As the Companions regard the cat with emotions ranging from tepid disinterest to cautious suspicion, the context once again mirrors the narrative.

The Outsiders: Doc (The Slums) 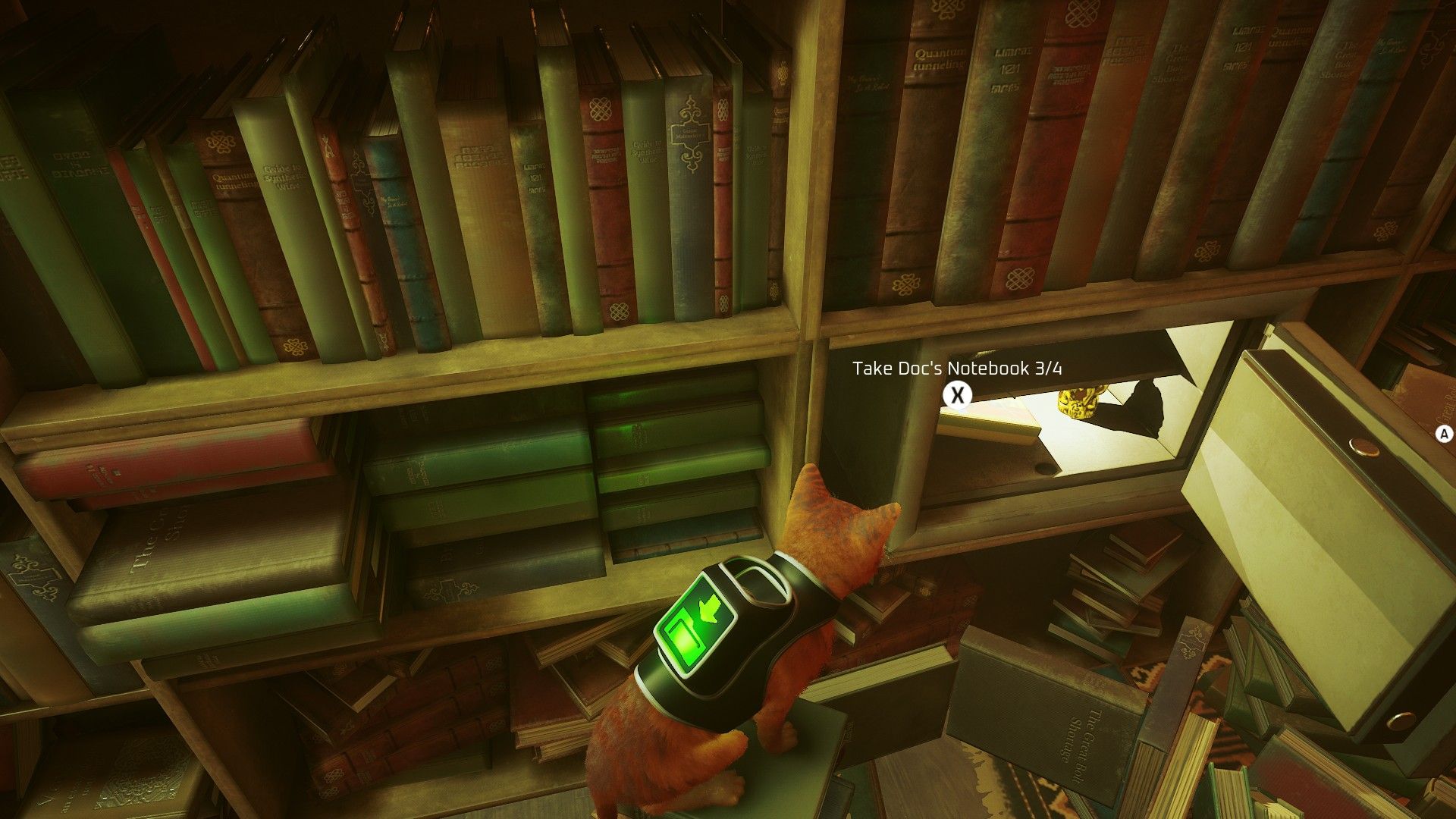 Doc, with his library bursting with tome after tome of books whose pages must predate most characters in the game, needs to be rescued by the cat and B-12 from a safe-house just beyond The Slums.

After convincing his moody son, Seamus, that his father is very much alive, the most action-packed segment of the game commences with you needing to flee hordes of Zurks as you go in search of the kooky scientist.

Doc, in his stained lab coat and sticky-out wiring, is a loving ode to the "mad scientist" archetype popularised unwittingly by the likes of Albert Einstein. Again, even in this world all but devoid of humanity, there are signposts that lovingly point to its past as the world's remaining inhabitants repeat history, perhaps without realising it themselves.

As Seamus and his father lovingly embrace, reunited, we learn that the robots of Stray are not emotionless husks left to rust peacefully but rather have become a living, feeling life force in their own right. They might not be flesh and blood, but genuine emotion is shown by the robots – whether the "strange urge to pet you" as noted by one android to the flustered irritation of another as he scrambles to scrub the paint off the pavement, the robots of The Slums are far from soulless. 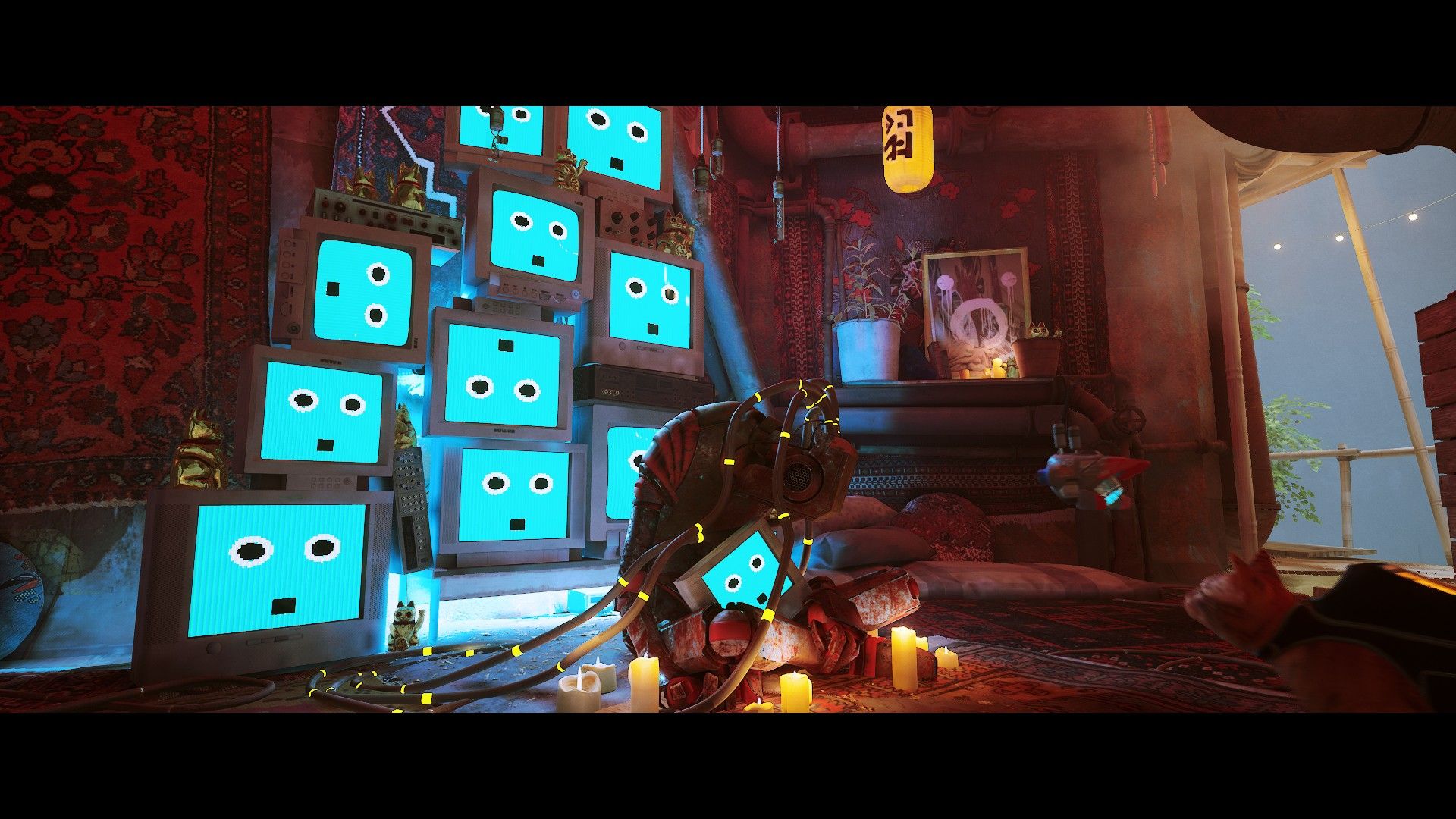 After passing through the sewers, you finally arrive at Antville: the home of Zbaltazar and his own host of Companion androids.

High up above a kingdom of veritable trash and scraps, the Companions still find ways to nurture the world around them, even growing plants and decorating their narrow slice of the Walled City with streaks of colourful homemade paint.

The makeshift style of Antville is reminiscent of the shanty towns of Hong Kong; these simple structures still exist as functional villages on Hong Kong island, largely formed of metal sheets bound together by rope and bamboo scaffolding.

Much like Antville being built at the mouth of a sewer, large sections of Hong Kong have been built atop reclaimed land; the Tseung Kwan O region itself was built right on top of one of Hong Kong's many landfills, a place once clogged with dumped rubbish now operating as a fully-functional neighbourhood.

As the cat leaps up to promptly ruin a traditional game of mah jong, it is especially hard to ignore the many contextual clues given to us in Zbaltazar's makeshift kingdom that give him and his environment so much depth of meaning.

If the name "Zbaltazar" strikes you as strange, you're not alone. It does, however, seem to be an anagram of sorts for the name Balthazar. Balthazar was one of the Three Wise Men who, if you're not swotted up on your Biblical lore, were purported to have brought Baby Jesus some gifts after his birth.

This might seem like a trivial fact at best, but it becomes all the more intriguing when you learn that the Biblical Balthazar's gift of myrrh is said to have prophecised the eventual death of Jesus himself. With poor B-12 crushed by the realisation of his once-human existence after regaining his memory moments before arriving at AntVille, could this "gift" of sorts have been double-edged foreshadowing this whole time?

Isaac and Noam are two other members of Antville with biblical names. Isaac was the beloved only son of patriach Abraham, and Noam is the feminised version of the character Noah, who survived a world-ending rainstorm by taking shelter in his ark. 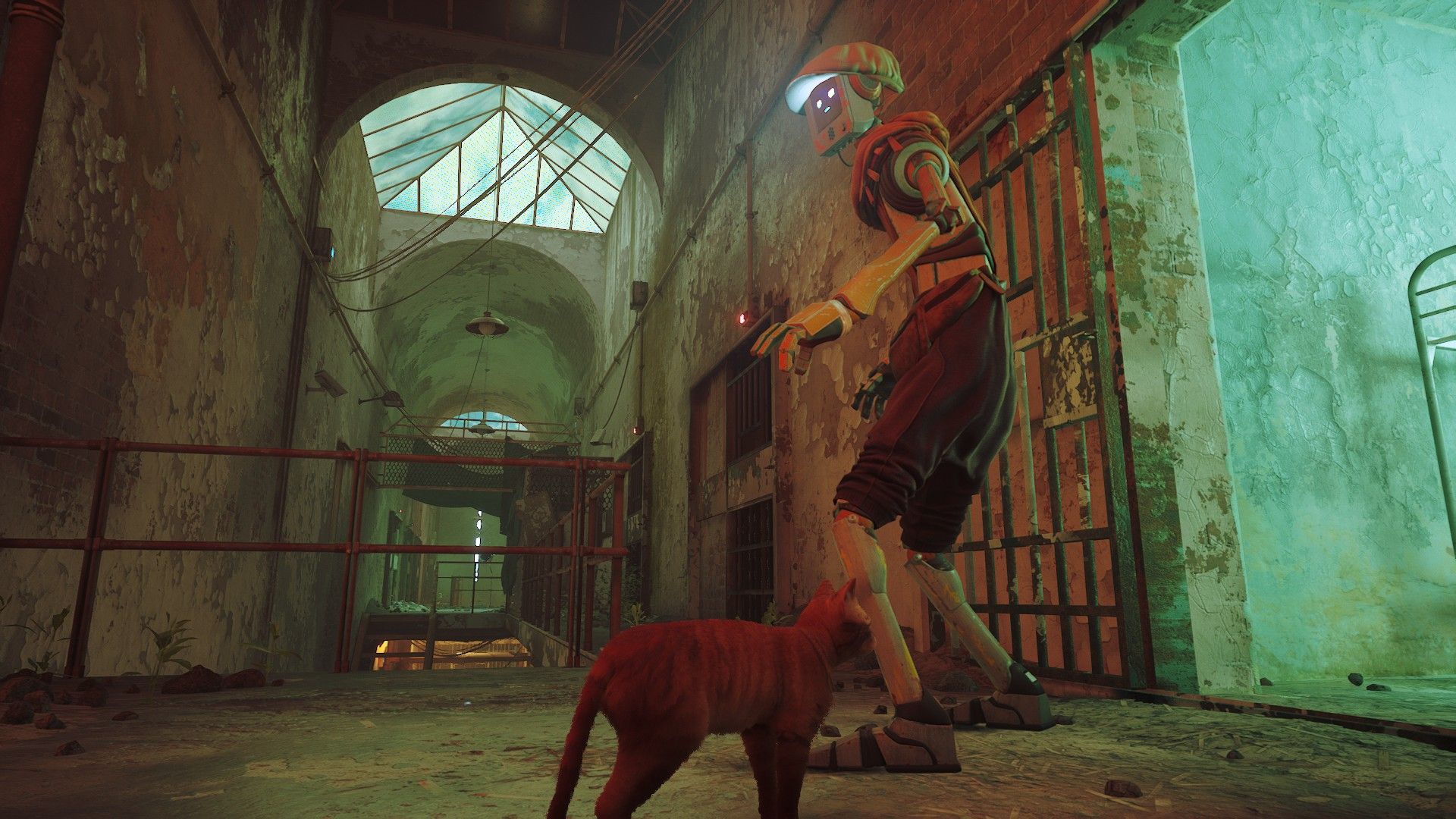 Clementine, the rebellious droid of Midtown who never managed to make it to the surface, is one of the most compelling Outsiders. Intrepid and immediately eager to help the unlikely duo on their mission, she is the embodiment of the dream of freedom that seems to have died out in other parts of the City.

Midtown as a setting is rife with symbolic allusions to the theme of societal decay. With a new order being implemented by the Peacekeepers and their eagle-eyed Sentinel droids, Clementine and her friends hide out at the Residence and plan their next acts of dissension.

The patrolling of police and harsh border restrictions are reminiscent of the impact of the SARS epidemic of 2003, when the disease went endemic in Southeast Asia and resulted in land border closures, quarantines, and heightened police presence in the streets.

In Stray, one needs to stop and wonder what the droids are scared of; pathogenic contagion in the form of disease won't affect them, as they are comprised of inorganic matter, and so the notion of societal contagion must be addressed instead.

Perhaps the Peacekeepers fear the contagious notion of freedom, fear the whispers of the Outside being mentioned in passing between the bowed heads of the enlightened few, as unsuspecting droids on the streets have their tin heads filled with messages of social uprising in the form of seditious music, art, and literature.

Midtown is a metaphor for the suppressed voices of a people yearning to be free again, and Clementine's sacrifice makes her the martyr for the cause. 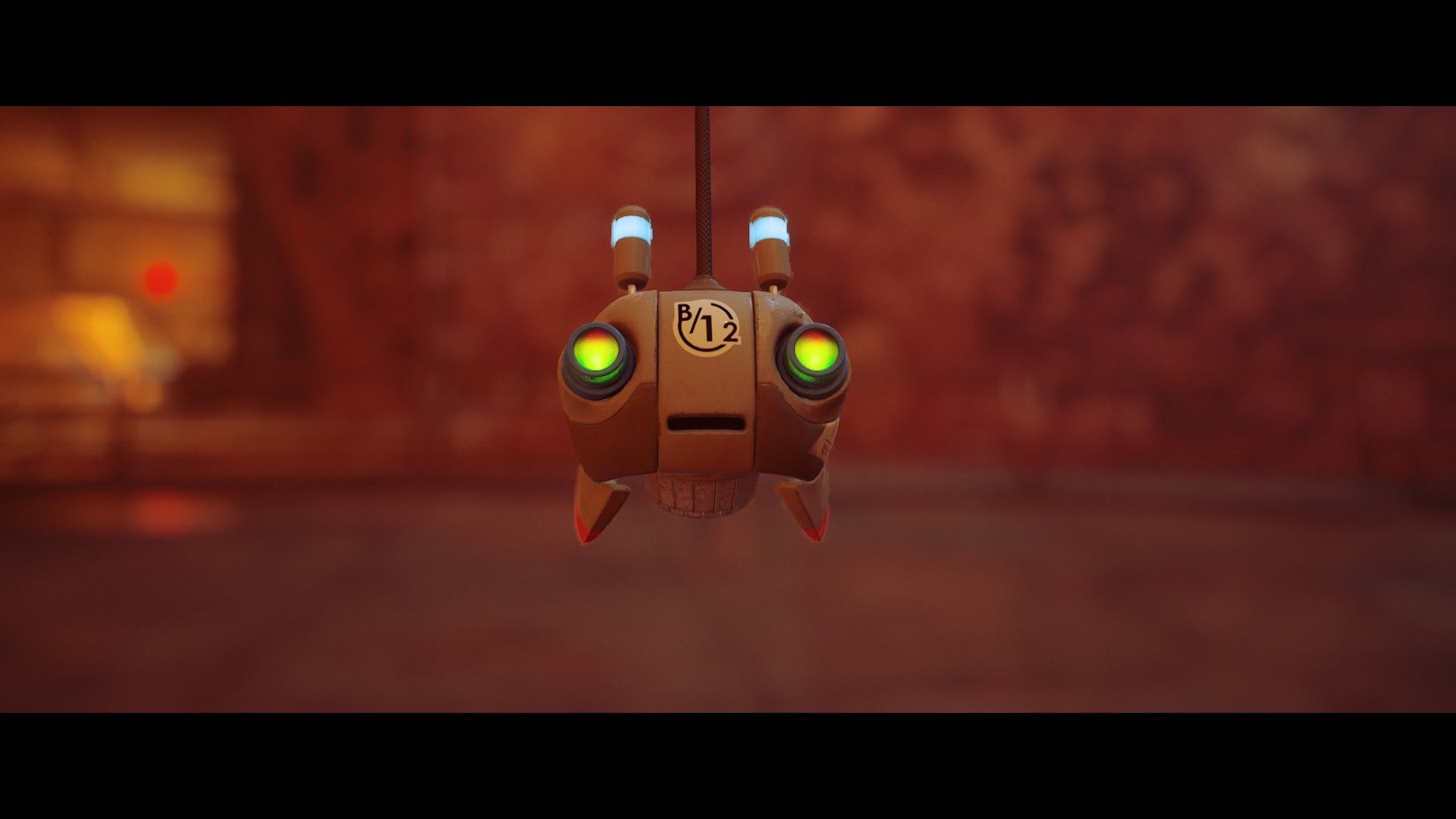 It wouldn't be Stray without a ginger tabby cat, but that tabby cat would never have made it through The Slums without his best friend, B-12.

B-12 is the consciousness of a human scientist who, in a desperate final attempt to re-open the city walls after the onset of a disastrous global plague, uploaded his memories to an android drone before he passed away. In a world where humanity seems to have gone extinct, B-12 was the last remaining human "alive" (technically) within the City walls.

The Only Hope For Me Is You

All the Outsiders combined did not do as much for the cause as B-12 himself did. They helped along the way, of course, sometimes providing utterly priceless tools that assured survival – that UV lamp was a Godsend, thanks Doc – but at the end of the day, only B-12 had the power to reopen the city.

Feeding back to our symbolic reading of history, organic versus social decay, and the creation of something beautiful from scraps of garbage, perhaps B-12's sacrifice teaches us a poignant truth: that only humanity can save itself from its own downfall.

Or perhaps it just teaches us that all our favourite characters have to die in every game.

Even in the game about a cute cat and his android best friend.