Rainmaker is one of the many Anarchy Battle modes that make up Splatoon 3’s competitive ranked multiplayer. Rainmaker, traditionally, has been a quick mode that often ended before it really began, making it highly unbalanced, but equally as high octane. Splatoon 3 has made some changes that help round out the overall experience.

Whether you are a fresh-faced squid or an old octoling, Rainmaker will take some getting used to. Due to the lack of tutorials found for any of Splatoon 3’s Anarchy Battles, this can be easier said than done. Don’t worry though, we’ve got you covered with some tips and tricks on how to succeed. 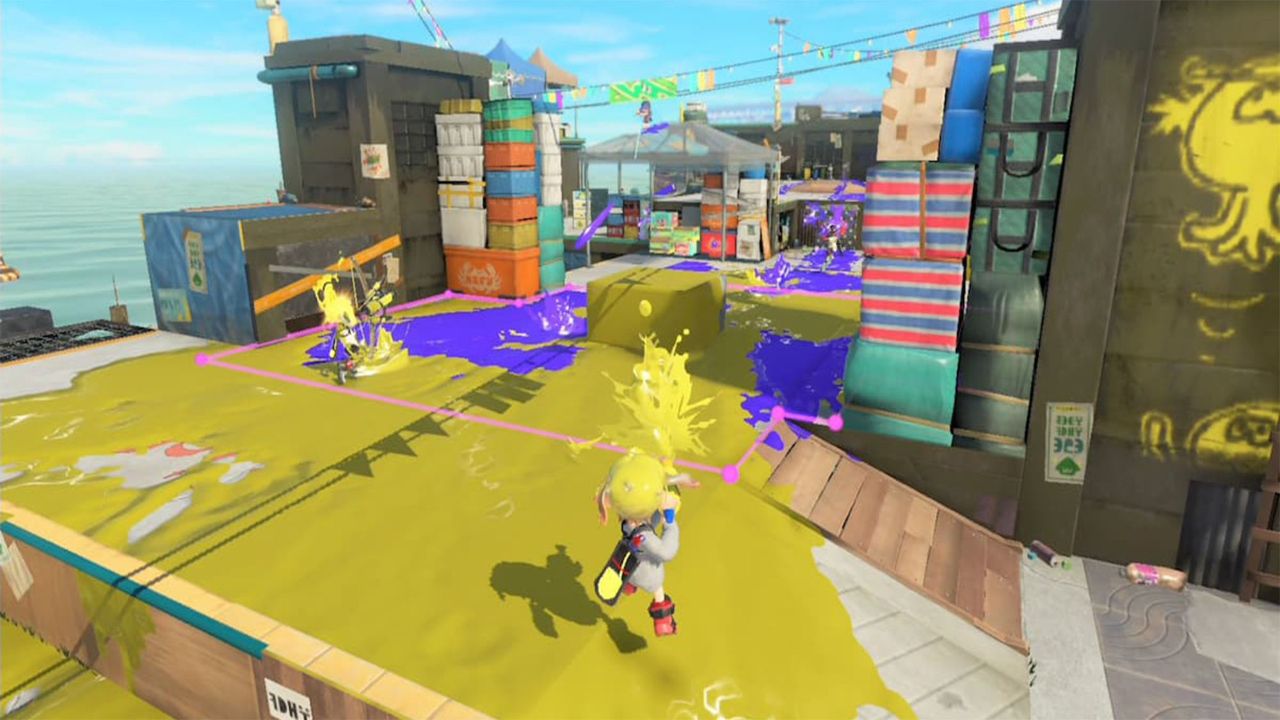 Rainmaker is not a complex mode in theory. It is basically just ‘Capture The Flag’ with some slight (ok, maybe MAJOR) alterations to the formula. In the centre of the field, there is the Rainmaker. Teams rush to the Rainmaker in an attempt to claim it. The team who manages to claim the Rainmaker and dunk it in their opponent's base wins.

There are a few things to note when playing Rainmaker that makes this process a bit more complicated.

The Rainmaker has a shield that must be destroyed before it can be claimed. This requires your team to focus their ink on the Rainmaker. Be warned, however. When the Rainmaker’s shield breaks, there is a large explosion in the colour of the team who broke it. This explosion is powerful enough to instantly splat any opposing player.

Getting the Rainmaker into the enemy base is difficult since maps are fairly large, and the enemy team is trying to splat you at all times. Not only that, but the Rainmaker is quite literally a giant golden beacon that is hard to ignore. Its very presence will draw the ire of your foes.

To make travel easier, there are Checkpoints on each map that snake their way towards the enemy's base (and yours of course). If you take the Rainmaker to one of these Checkpoints, you can dunk it, causing the Checkpoint to activate. This will drop the Rainmaker, and it will also cause a fresh shield to spawn. However, Checkpoints are very important for one simple reason…

If the Rainmaker is dropped and not picked up quickly, it will vanish and reappear in the centre of the battlefield. That is unless you have captured a Checkpoint. This will instead cause the Rainmaker to appear at the Checkpoint, making it much easier to push into enemy territory after an unsuccessful attempt.

The Rainmaker will spawn a fresh shield every time it respawns.

The Power Of The Rainmaker

The Rainmaker replaces the weapon of anyone who picks it up. The Rainmaker is a potent weapon in and of itself, however. You can fire a powerful blast of ink at enemies if you are stuck in a bind, and this blast is more than enough to make people think twice about coming after you. The Fire Rate is very low, so don’t get too cocky.

Not only that, if someone holds the Rainmaker for too long, the awesome power this golden ink font holds will result in them being splatted. This is another reason why you want to be swift and aim for those Checkpoints. 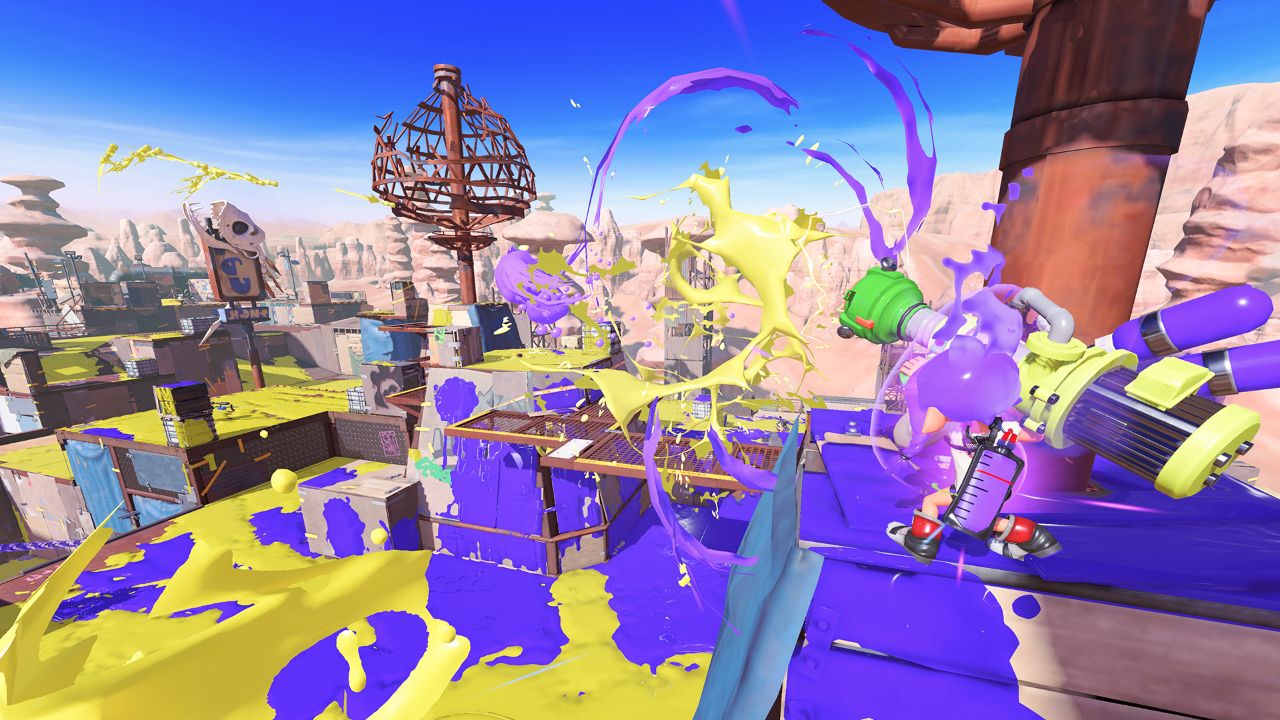 We’ve covered the basics of the mode, and now we are going to dabble in some tips to make your Rainmaker journey that little bit easier.

Whilst no competitive mode in Splatoon 3 requires inking/coverage/turf to win (unlike Turf War), that doesn’t mean you should ignore it. Having your team's ink covering the battlefield makes everything easier. You can move faster, hide, engage, escape – the works. Not to mention it also hinders your enemy, making their life harder. It’s a win-win.

Splats might not seem that important in Splatoon 3 because, well, no mode directly rewards you for doing so. Splatting is not a win condition. That being said, Splatting in Rainmaker is very important. The enemy wants to take down the Carrier, and you want them to not be doing that. The best way to stop them? Take them out.

Everyone should be trying to get Splats – even your Support. If players aren’t able to push the enemy back or get Splats, then they aren’t pulling their weight.

Of course, the ‘best’ route isn’t always the best. Sometimes the enemy is holding that position too well. In that case, knowing each map well enough to find alternate routes is always a good idea.

In previous games, the player holding the Rainmaker was incredibly vulnerable and hard to support. This was due to the Carrier not being able to take advantage of most buffs in the game. This has changed in Splatoon 3.

Carriers can make excellent use of Tacticooler in particular as this will provide them and their teammates with a much-needed burst of speed. Movement is king in Splatoon, and if you can move better than the enemy, you are much more likely to come out on top.

Following on from that, the Carrier is way more mobile in Splatoon 3 than in any other game. This is because they don’t lose access to their innate movement abilities. We are talking about Squid Roll in particular.

Squid Rolling is a movement technique that allows for rapid changes of direction when in squid form. Using it well can drastically increase your survivability since you gain access to a very effective dodge. Since you can use this with the Rainmaker, you can be quite slippy if you have a good handle on your movement mechanics.