You are here:
Home / Someone Made A List Of Nintendo Must-Plays For 2021… For The Wii

If you need a list of Wii games to play in the new year, one person on the ResetEra forums has you covered.

Nintendo’s revolutionary console celebrated its 14th anniversary last month. Yes, it has been 14 years since the Wii launched. It would end up being Nintendo’s most successful home console, selling over 100 million units. A primary reason for its success was the innovative motion control. Some might take it for granted now, but motion control was new for many people in 2006. For the first time, players could manually slash opponents as Link in a new Legend of Zelda rather than just simply pressing a button.

The Nintendo Wii also has a good game library, with a number of highly-esteemed titles. Sadly, the Wii is also home to much shovelware, such as the infamous Ninjabread Man. Still, despite the shovelware, the Wii was certainly worth getting for its motion control and quality titles. There are plenty of great Wii games if you’re picking up the console today, which is what one person has recently done.

Over on the ResetEra forums, one user named Ostinatto picked up a Wii and was looking for game recommendations. Handily, he compiled all the recommendations into a list. Check it out in the screenshot below. 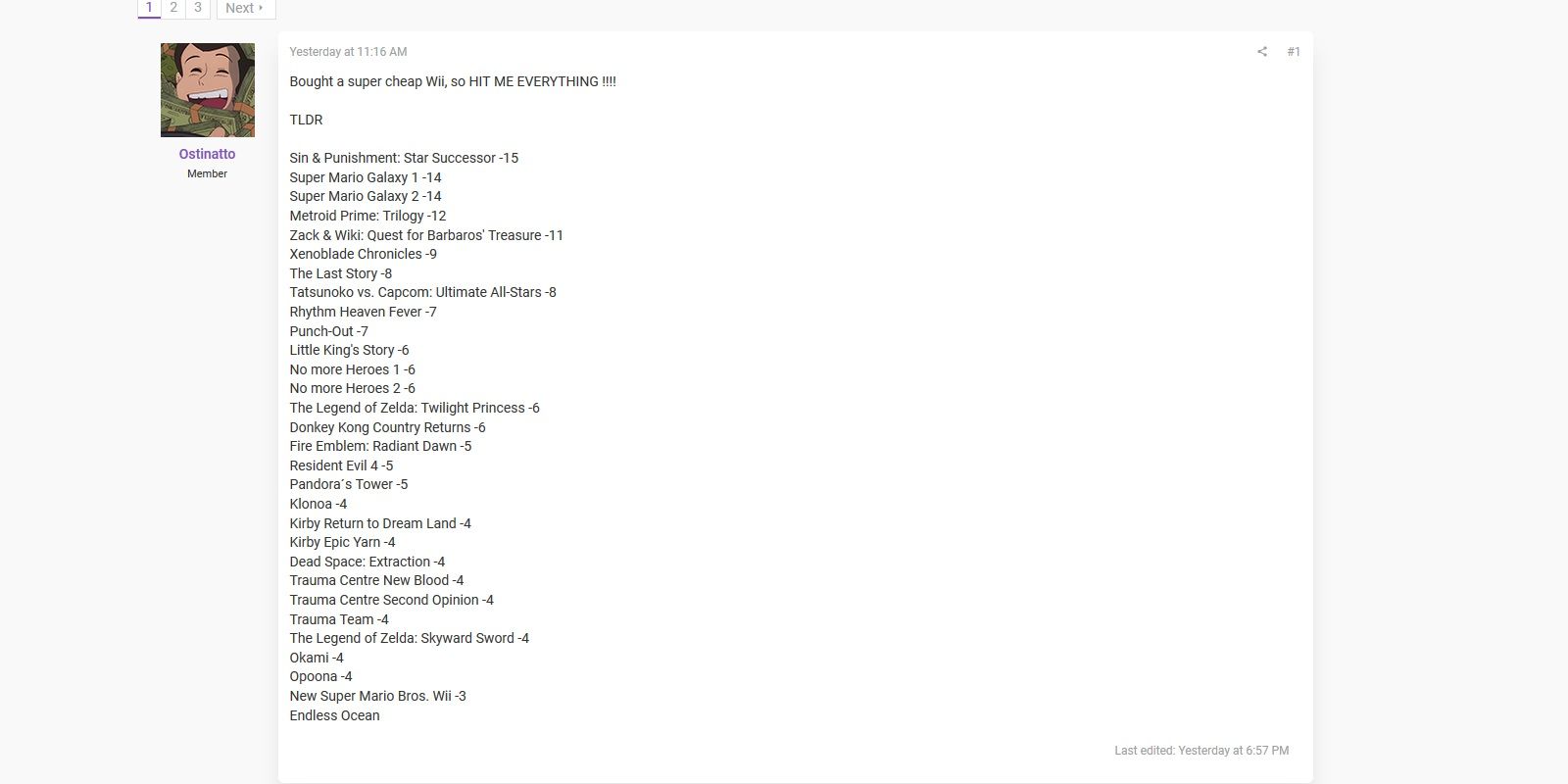 It’s a great list, with the obvious ones like the Super Mario Galaxies, The Legend of Zelda: Skyward Sword, and Metroid Prime Trilogy making it. We also see some lesser known titles, such as Trauma Team and Opoona. If Ostinatto follows the list, he will have plenty of grand experiences to jump into.

Some might be wondering: Why pick up a Wii in 2020 when the Nintendo Switch is going strong? It’s not uncommon to go back and pick up an older console for different reasons. Perhaps you missed out on the Wii era, or have some games you want to play again. There are many titles that remain exclusive to the console. The Last Story and Fire Emblem: Radiant Dawn are two such exclusives. Sin & Punishment: Star Successor, the most mentioned game in the list, is also exclusive to Wii. Also, if Ostinatto picked up a first model Wii, that means he could also play GameCube games. Many GameCube titles have not been ported, making playing games like Paper Mario: The Thousand-Year Door and Eternal Darkness: Sanity’s Requiem impossible unless you own a GameCube or first model Wii.

Simply put, picking up a cheap Wii in 2020 can still lead to good times.

NEXT: Nintendo Switch Is On Course To Have The Most Successful Year For A Games Console Since 2010