You are here:
Home / Solasta: Crown Of The Magister: Complete Combat Guide

Solasta: Crown Of The Magister is a game that harkens back to the good old days of CRPGs. Way back when these games had complex character creation tools, in-depth mechanics, challenging combat, and oodles of dice getting rolled behind the scenes to simulate that classic pen and paper, Dungeons and Dragons feel.

The most popular of these games were based on Dungeons and Dragons, recreating the rulesets of the time in electronic form. Solasta follows suit and brings Dungeons and Dragons 5th Edition to computers for the first time – albeit in a homebrew kind of way. It can be tricky to grasp all of the mechanics that make up combat, so we are here to lend a hand.

Bring A Healer With You 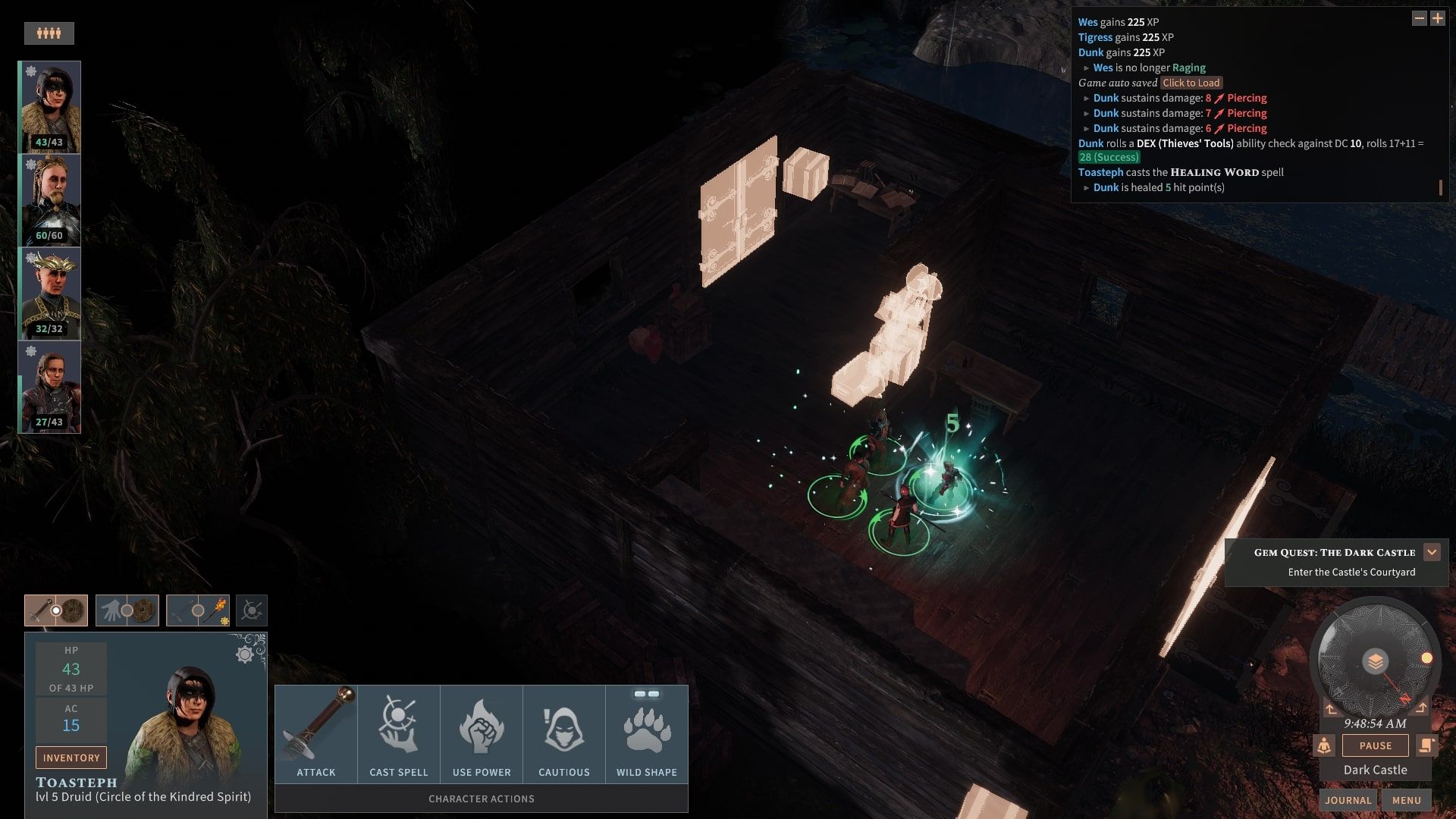 One thing that differentiates modern RPGs and RPGs based on pen and paper systems, is the random nature of dice. Whilst similar to the percentage systems commonly used in the likes of, say, Final Fantasy, dice offer a greater degree of variance, and that can lead to a staggering amount of damage inflicted by enemies who really shouldn’t pose that much of a threat.

Because enemies can get lucky and chunk your party like a block of cheese, you need some way to offset that. This is where healing comes in, but healing does not come easily. You can buy expensive potions, or you can craft them with expensive ingredients. Better yet, you could bring a Cleric or a Druid, and they will use their magic to heal you for free. Heck, the Cleric can even revive the dead – a very useful ability.

Don’t Leave Home Without A Rogue 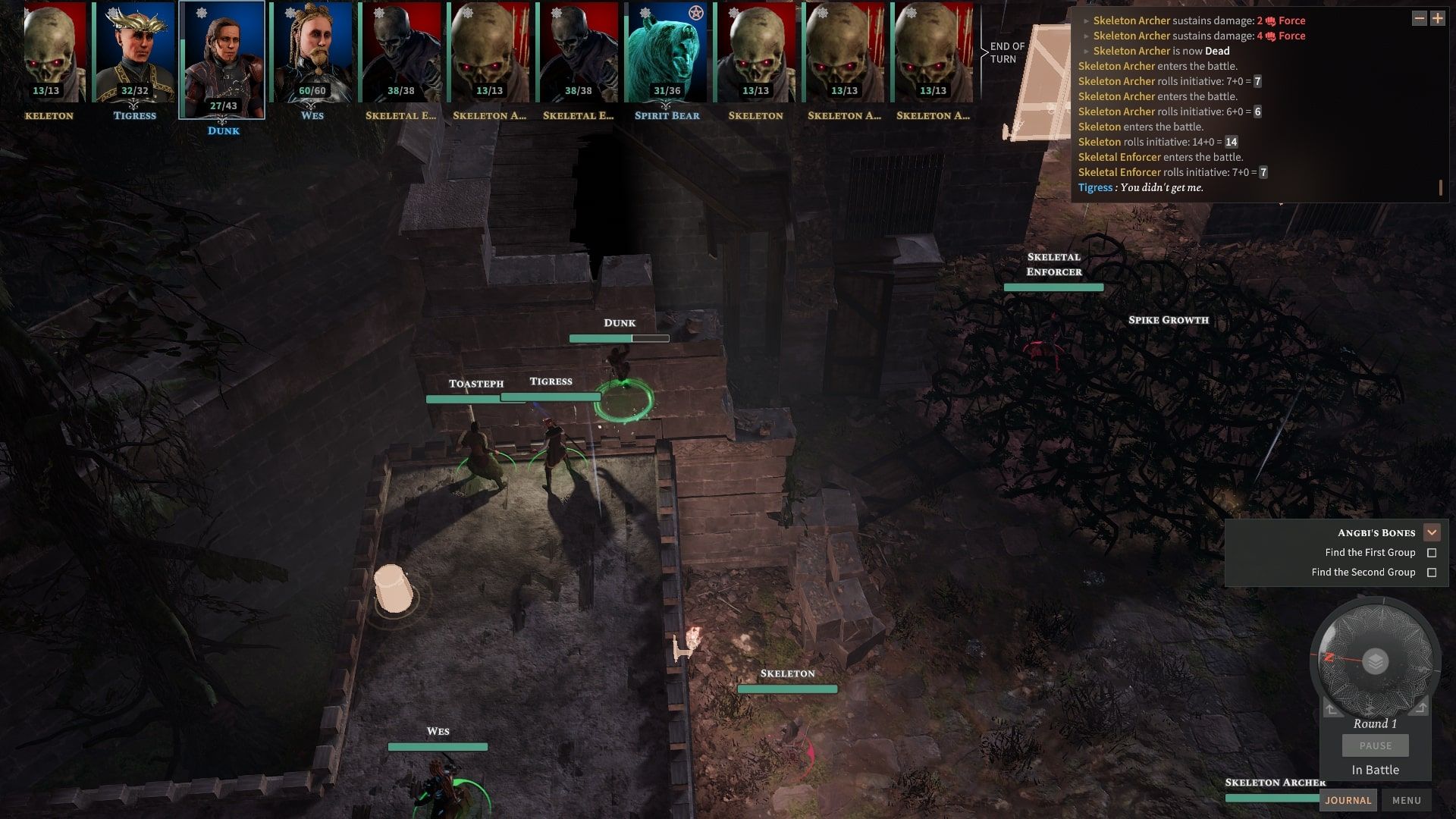 Rogues are quite possibly the most important character in any party. They are masters of subterfuge, trickery, and locks. If you need to open a door, scale a wall, or pick a chest, then the Rogue is the guy/gal for the job. A well-built Rogue, even at level one, can crack even the hardest of early-game locks, and their skills only grow from there.

The monetary benefits of being able to loot everything that isn’t nailed down is only one part of the Rogue's appeal. The Rogue is also a stellar combatant who will very likely out-damage the rest of your team. With access to powerful abilities like Sneak Attack, and being proficient in all manner of ranged and melee weapons, they can operate in any capacity and work well. They are also incredibly fast and hard to catch, making them shockingly survivable despite their general lack of armor.

Use Buffs And Debuffs 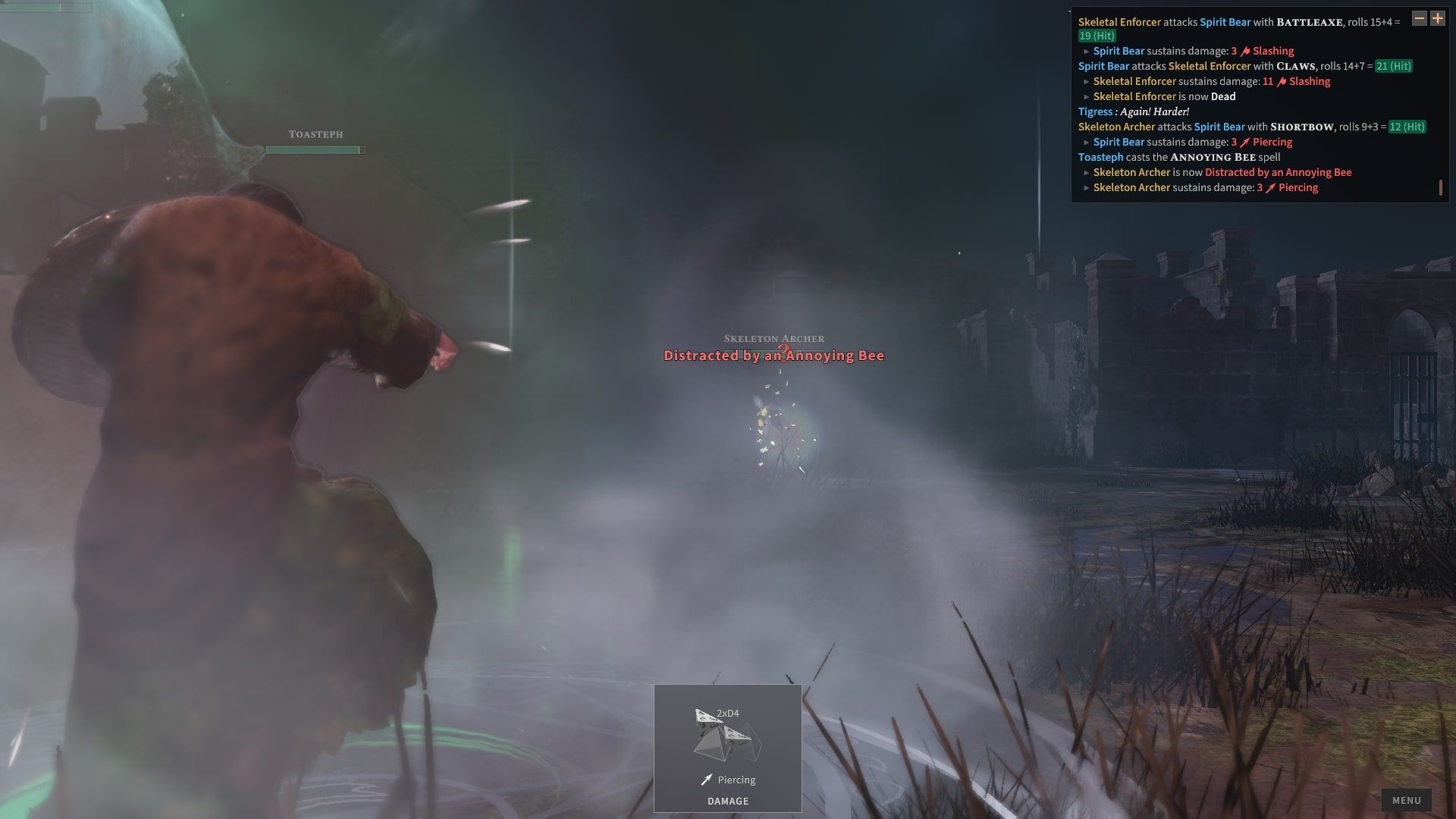 Damage is all well and good, but a lot of factors can get in the way of you dealing damage. Maybe an enemy has really good AC, maybe they are ludicrously powerful and will tear your party apart in melee. Whatever the reason, sometimes you just don’t have the means to effectively tackle an enemy.

This is where buffs and debuffs come into play, and these are one of the primary reasons you would take a magic-based character. Simple spells like Blind can often outshine damage spells as it leaves the enemy unable to attack or defend effectively. Casting Bless on your party can push their stats above and beyond their natural limits, giving you that extra edge. It’s almost like cheating – if you can’t beat them, find a way to even the playing field.

The Benefits Of Advantage 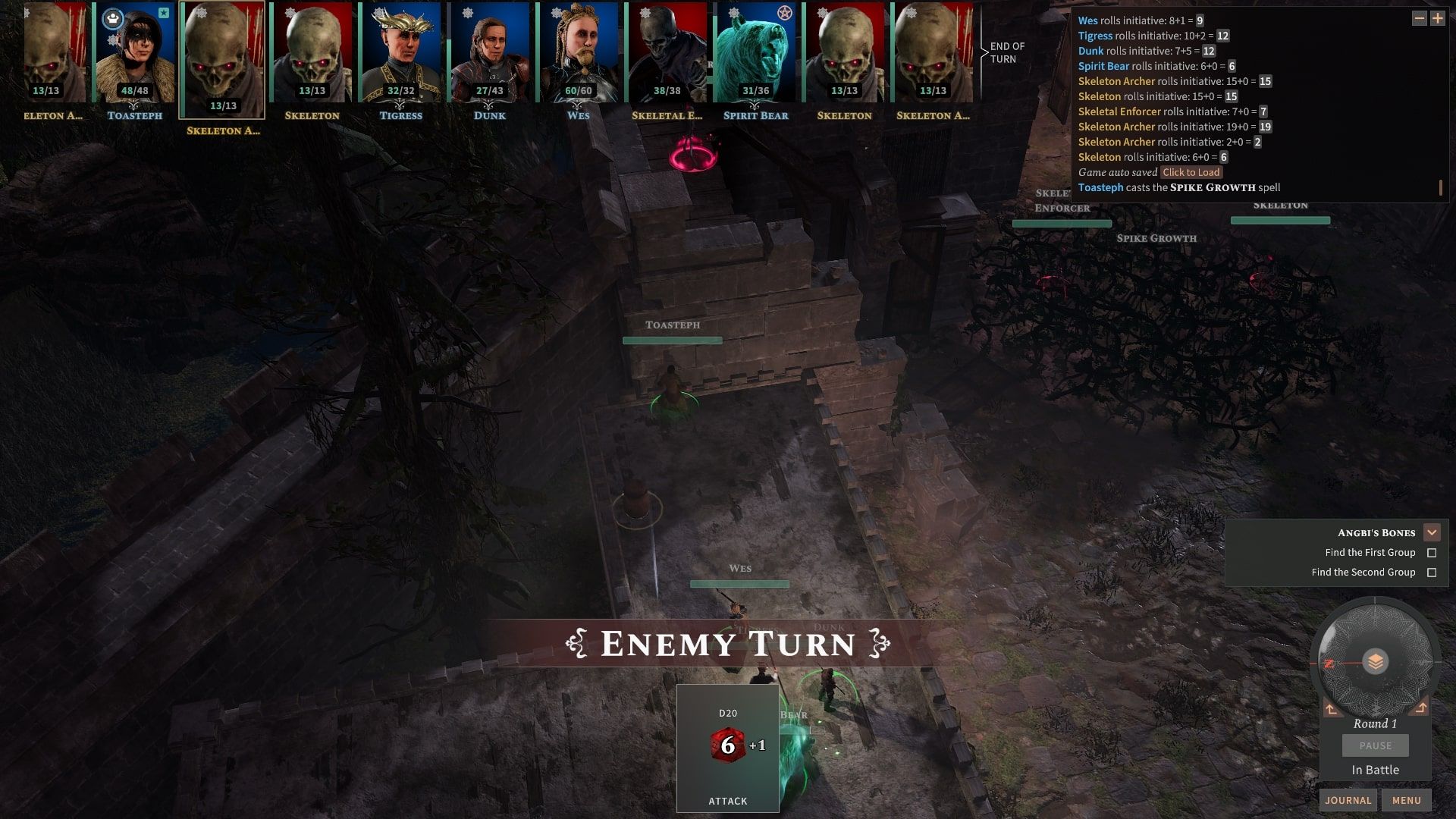 Dice will be your bane when playing Solasta. It doesn’t matter how skilled you are, sometimes your roll is a one, and your Barbarian flunks their attack. This can be devastating as you don’t want to be in a prolonged combat. The longer a fight goes on, the more chances the enemy has to mess you up with their dice.

This is where Advantage comes into play, and why you want to do everything in your power to constantly have an Advantage. What Advantage does is allow you to roll two dice every time you do anything, and then you get to pick the highest result. This drastically increases your odds in combat, making your team shockingly reliable. On the flip side, you want to try and ensure your opponents are at a Disadvantage, which forces them to roll two dice and pick the lowest result. 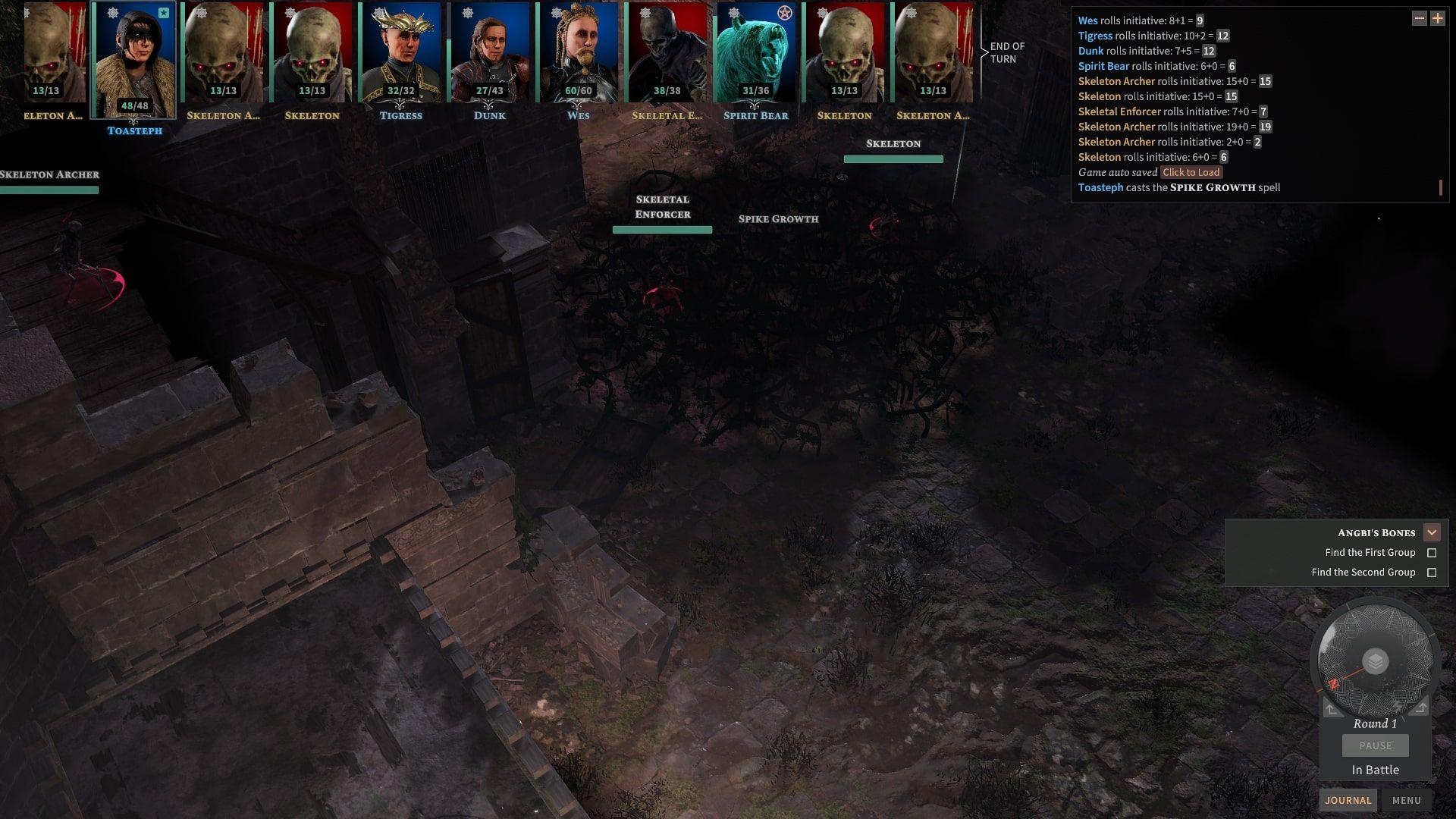 We have talked about buffs and debuffs, but there are way more spells and abilities that produce effects that don’t fit into that category but should not be overlooked. These often end up being environmental effects. For example, Grease can be used to coat an area with a slippery surface. Enemies can fall over, wasting their turn when crossing it. Placing it in a choke point can limit how many enemies can attack.

Spike Growth, on the other hand, does a similar thing only with a different focus. You can cover a large area in thorns, and enemies walking through them will take damage for every step. Worst case scenario, they waste movement trying to avoid it, giving you more time to deal with a split force. Best case, they run through it and take mountains of damage. An all-out attack isn’t always the answer. Make use of all your options. 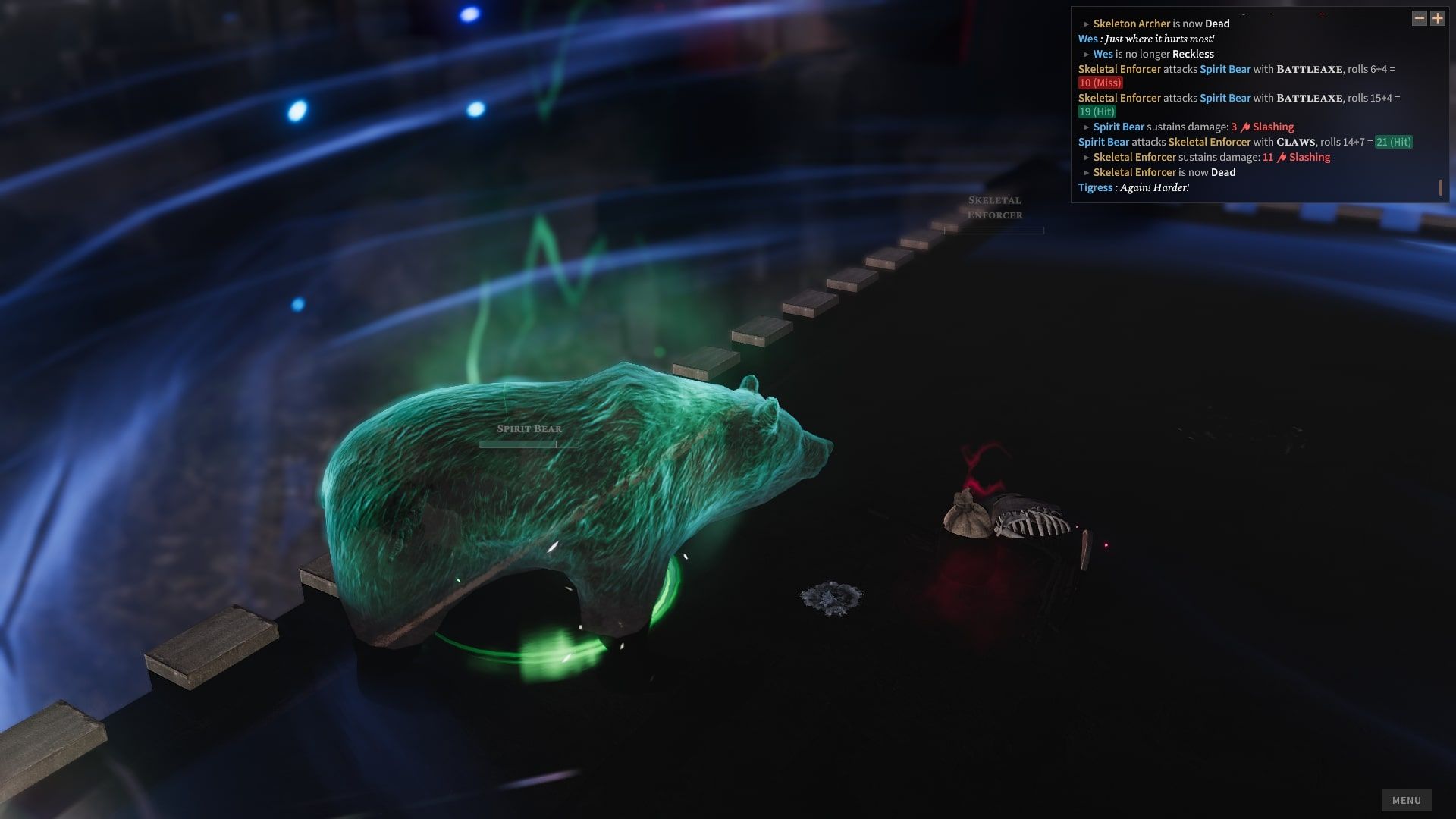 Solasta operates on a tile system, and you and your enemies can’t exist on the same tile. It also means larger enemies take up more tiles. A goblin may take one tile, whilst an Ogre could take up to four. Depending on the environment, you can use tough allies to block strong enemies from getting through to your squishy characters.

To do this, all you have to do is find a chokepoint, place a character in the middle of it, and suddenly, enemies either can’t get past because they are too big, or if they try to squeeze past, they will get hit with Attacks Of Opportunity. If you are body-blocking, consider forgoing your attacks to use the Dodge action. 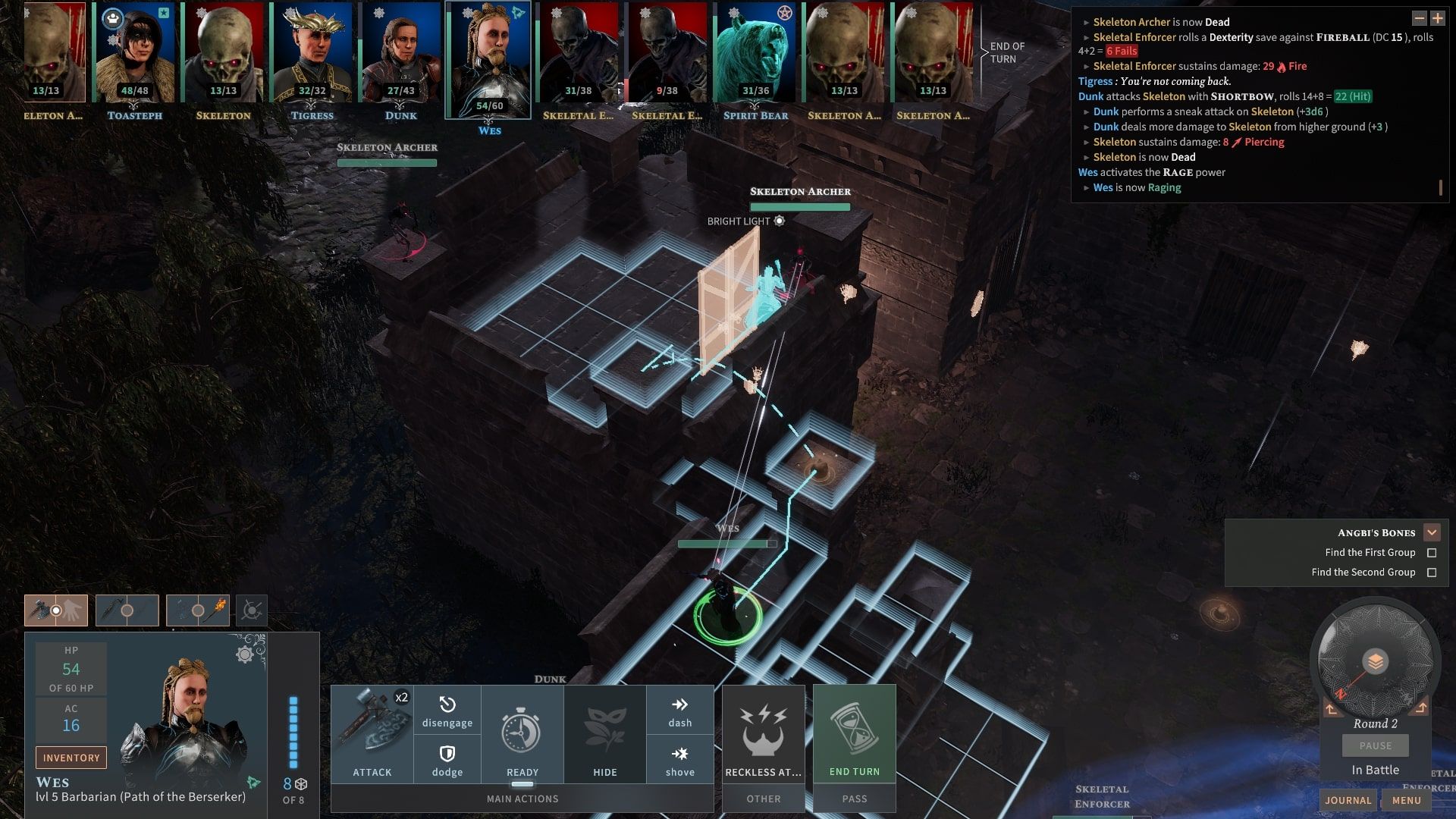 Speaking of Dodge, there are many actions characters can take that can be better than just simply attacking. These tend to take up your Action for the turn, but certain classes (like the Rogue) can use Bonus Actions instead. Maybe you need to get to a location quickly to stymie the flow of enemies? Dash is great. What if you want to ambush enemies? Then Hide can work wonders.

Not only that, but you can also use actions like Shove to mess with enemies in several ways. How about pushing an enemy onto a Greased surface, forcing them to risk tripping, or pushing them off a high ledge and letting gravity do the work? You can even knock people over, forcing them into a vulnerable Prone state, allowing your team to attack with Advantage. We’ve said it before, but sometimes attacking isn’t the best option. Solasta gives you countless options, experiment with them all.

Make Use Of Your Environment 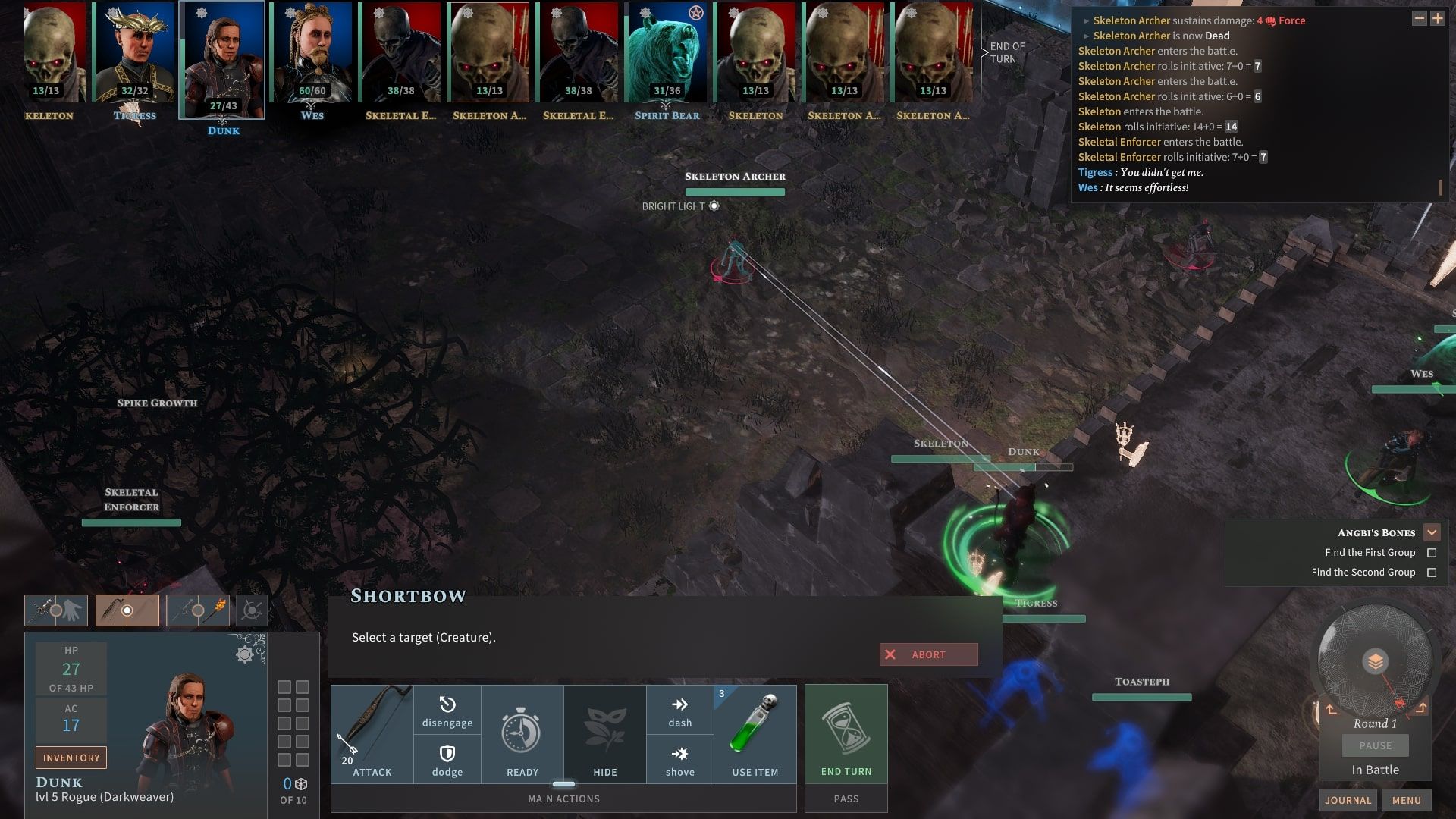 Whilst you can create your own hazards with the likes of Spike Growth, there are plenty of hazards that exist in the world naturally. You could be exploring some caves and the stalactites could be dangling from the ceiling for example. A well-placed arrow could be used to dislodge it and have it collapse on some hapless foe.

Maybe a location is particularly dark, making it difficult for your team to see. Throwing a Firebolt at an unlit sconce can help grant vision to characters who don’t have Darkvision. We touched on gravity earlier, but why not get creative. Try casting Sleep on a group of flying enemies and watch as they plummet to their (potential) death. Maybe make use of the vertical terrain features to get bonuses to your ranged attacks, or stay safe from enemies who can't climb as effectively. 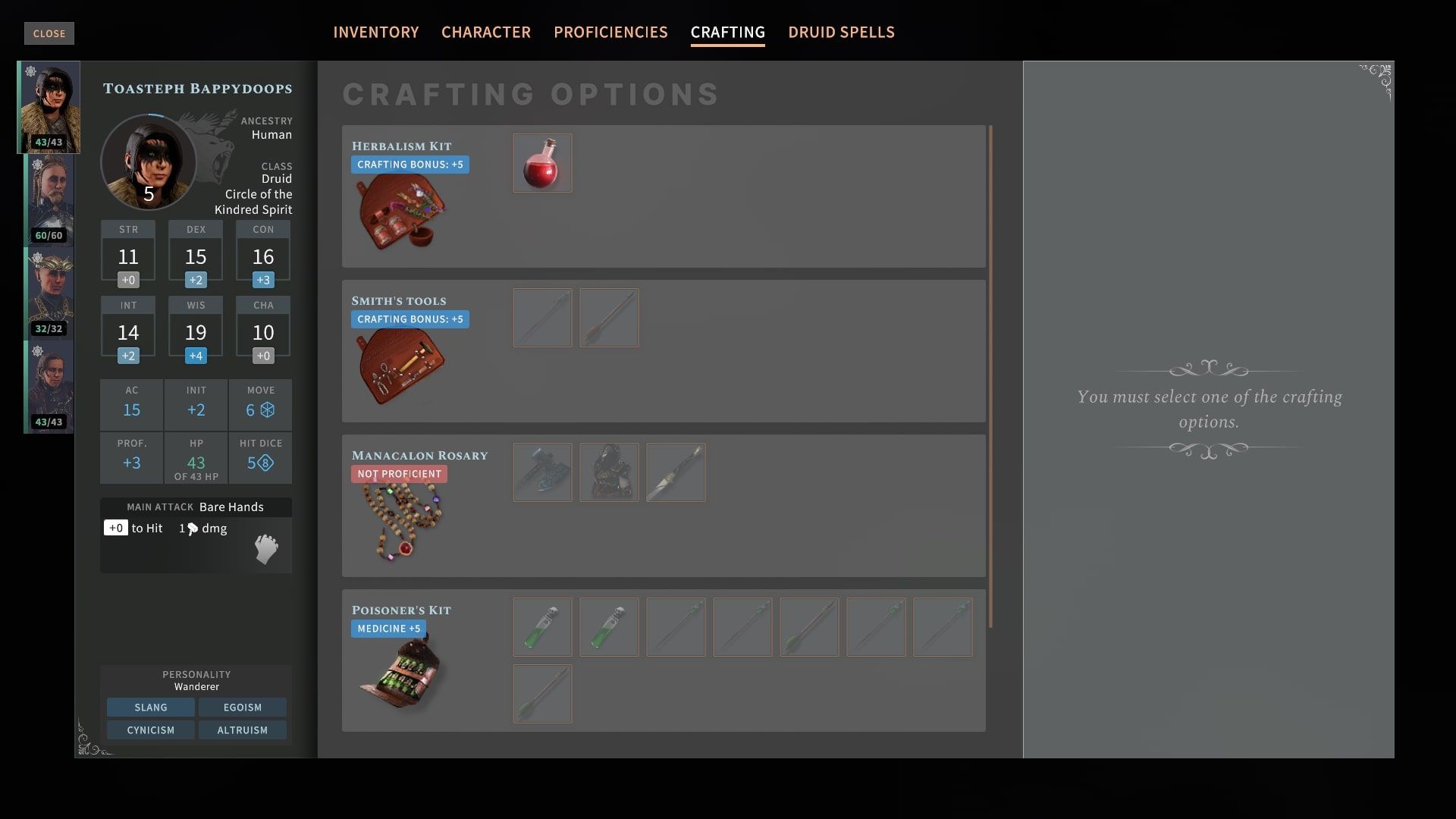 One of the easiest systems to overlook in Solasta is crafting. Crafting allows you to create not only simple potions, but also arrows, magical scrolls, and even poisons. Having your Rogue coat their dagger in a powerful toxin can increase their already substantial damage. Saving a Spell Slot and incanting a scroll instead is good resource management.

Not only that, but you can craft powerful magic weapons and armor by combining Primed items with specific ingredients. For example, Oil Of Acuteness combined with a Primed Longsword will create the Longsword of Acuteness – a mighty starting weapon indeed. You will need the recipe for anything before you get crafting, so keeping your eyes open when exploring, or checking shops, is a must.