Hey you, you’re finally awake. You’re starting Skyrim, right? Same as us and the millions of players ahead of us. This is just the prologue, where one of gaming’s most iconic adventures begins.

All you need to do is sit tight and wait for this carriage ride to end. Sit back, listen to the music, and Ralof. Don’t worry, you are not about to be executed; this game would be a real waste of money if it was. Instead, think about what sort of character you’ll be making for the adventure ahead. You’re in for a pretty long adventure, after all.

How To Escape The Dragon 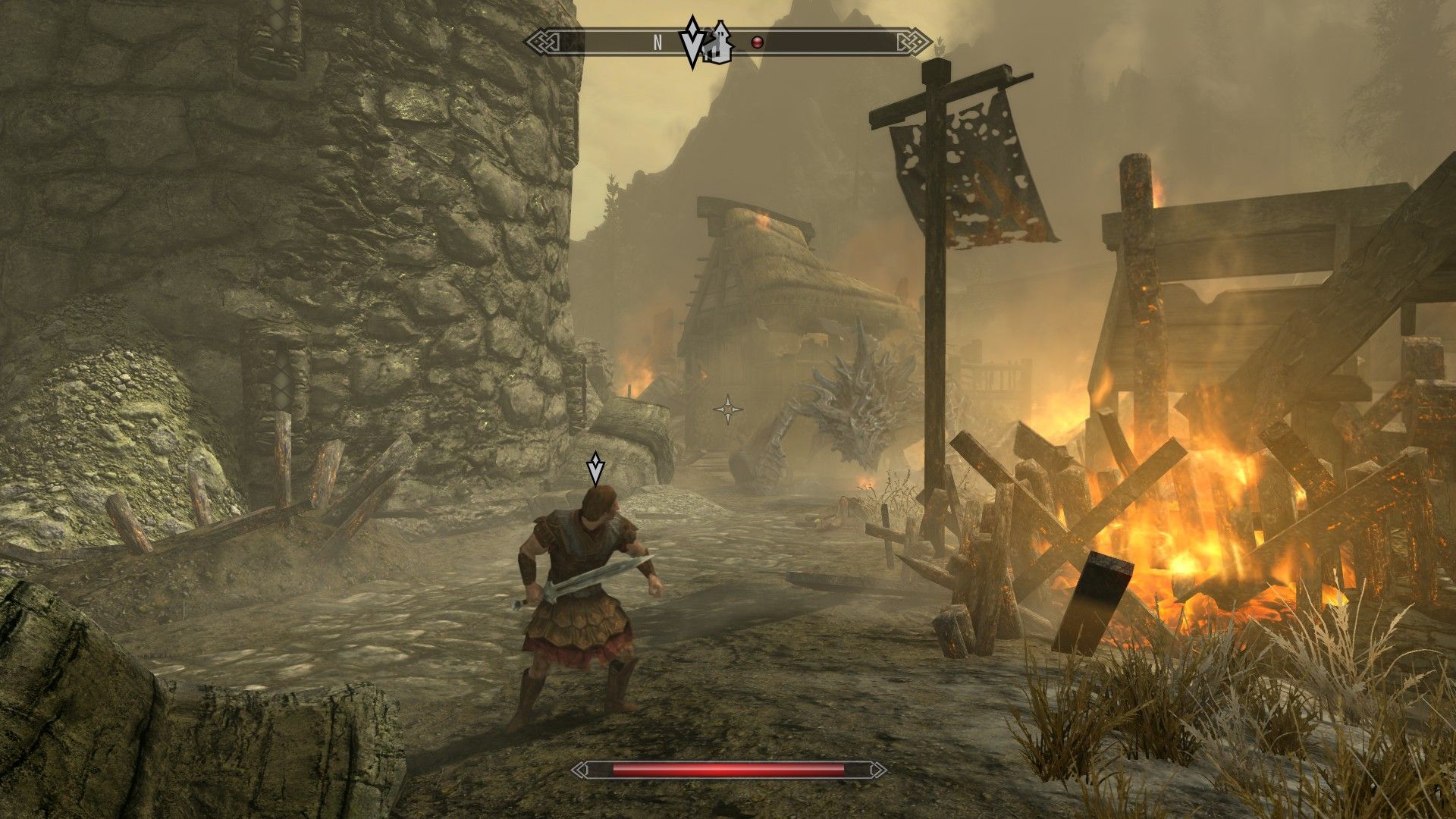 That was wild, huh? That dragon may have accidentally saved your life, but you only have a few seconds before it takes it. Follow Ralof and run to the watchtower ahead. In all the chaos, listen to what they’re saying and follow the quest objectives.

This section is quite linear, but you can still die if you’re not careful.

Once they finish talking, head up the stairs. Don’t worry too much about the snapping dragon head, and keep moving as soon as you can. You’ll reach a part of the map that’s blocked off by debris. Listen out and make a running jump. You’ll miss otherwise. From here, walk through the house and fall through to the first floor. You’ll meet Hadvar, the one who asked you for your name.

Follow Hadvar and pay attention to your surroundings. Make sure to hug the wall. The dragon will kill you if you walk into its fire breath. Make sure to follow your former executioner away from the chaos and to the keep. Here, you have to make a decision about who to follow.

This decision will have some consequences for what you encounter in Helgen Keep, who you talk to in Riverwood and Civil War Questline, but it won’t affect the overall game.

How To Get Through Helgen Keep 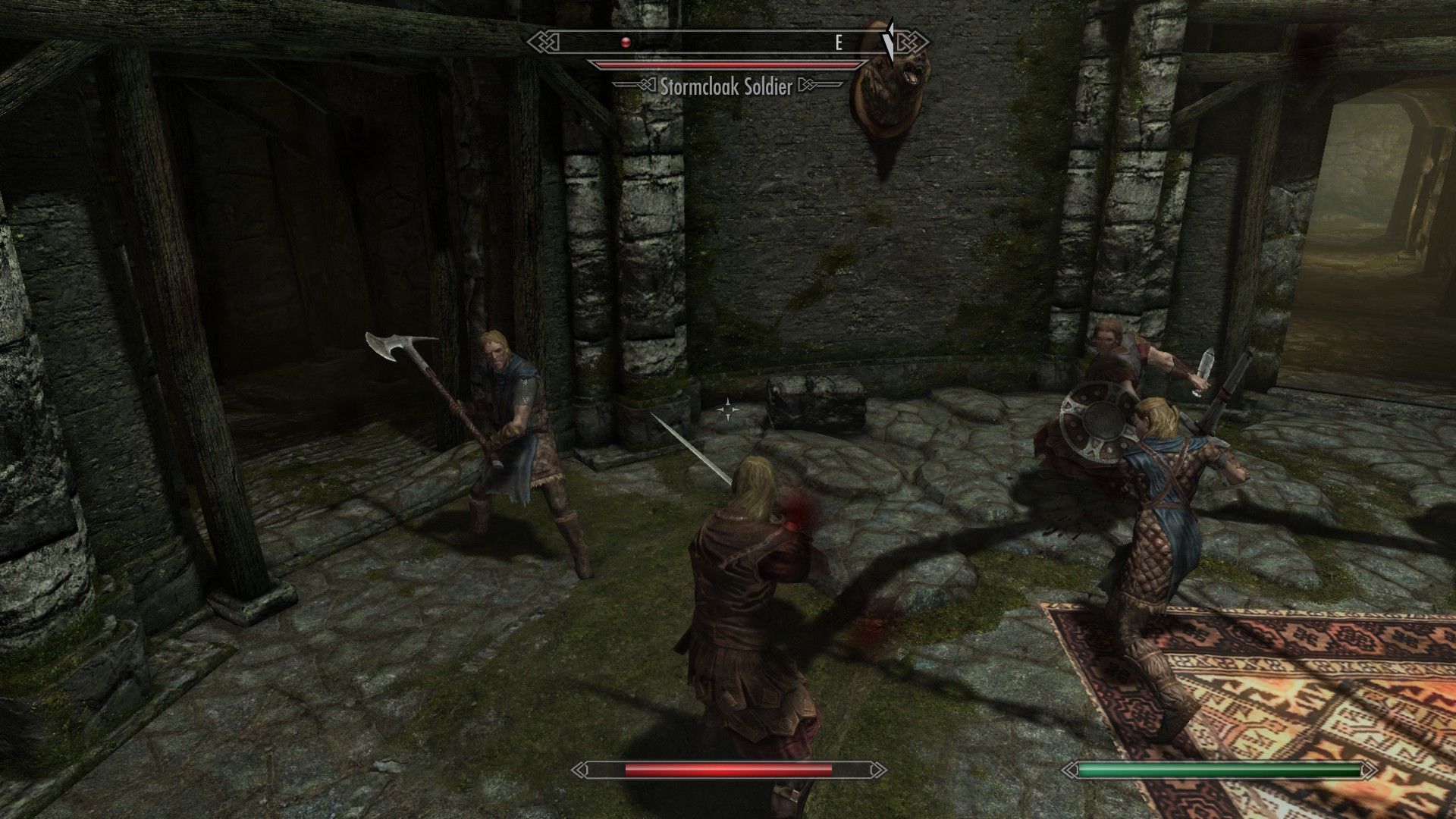 When you get inside, your chosen companion will unbind your hands, letting you interact. Loot the nearby chests for equipment. They will provide you will armor and weapons to survive the rest of your escape.

After a short delay, you'll be able to leave the room. Follow the path to the next encounter. Here, you will have your first taste of combat against two enemies. Make sure to block incoming attacks and constantly swing at the enemy to chip away at their health. After you defeat them, loot them. They can provide you with equipment to sell or two-handed weapons, if you're interested in going down that route.

Don't be afraid to scavenge equipment from fallen enemies. It's an excellent source of early money. 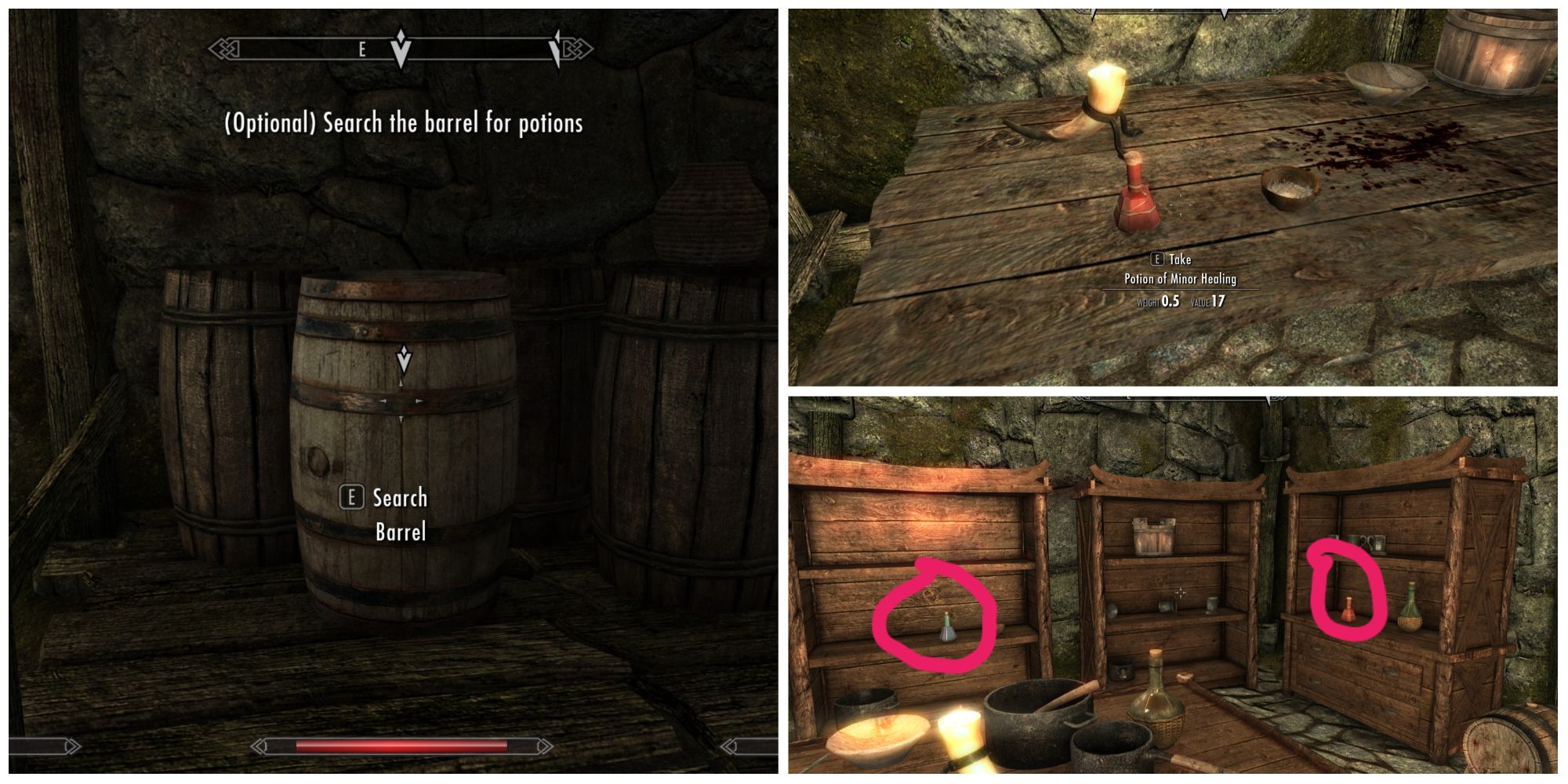 From here, follow your companion out of the room and down the stairs. After a quick interruption from the dragon, your companion will enter a room populated by two enemies. You will get an optional objective to loot a barrel for potions, which you should absolutely do. Make sure to search the shelves; you should be able to find a couple of other potions there. 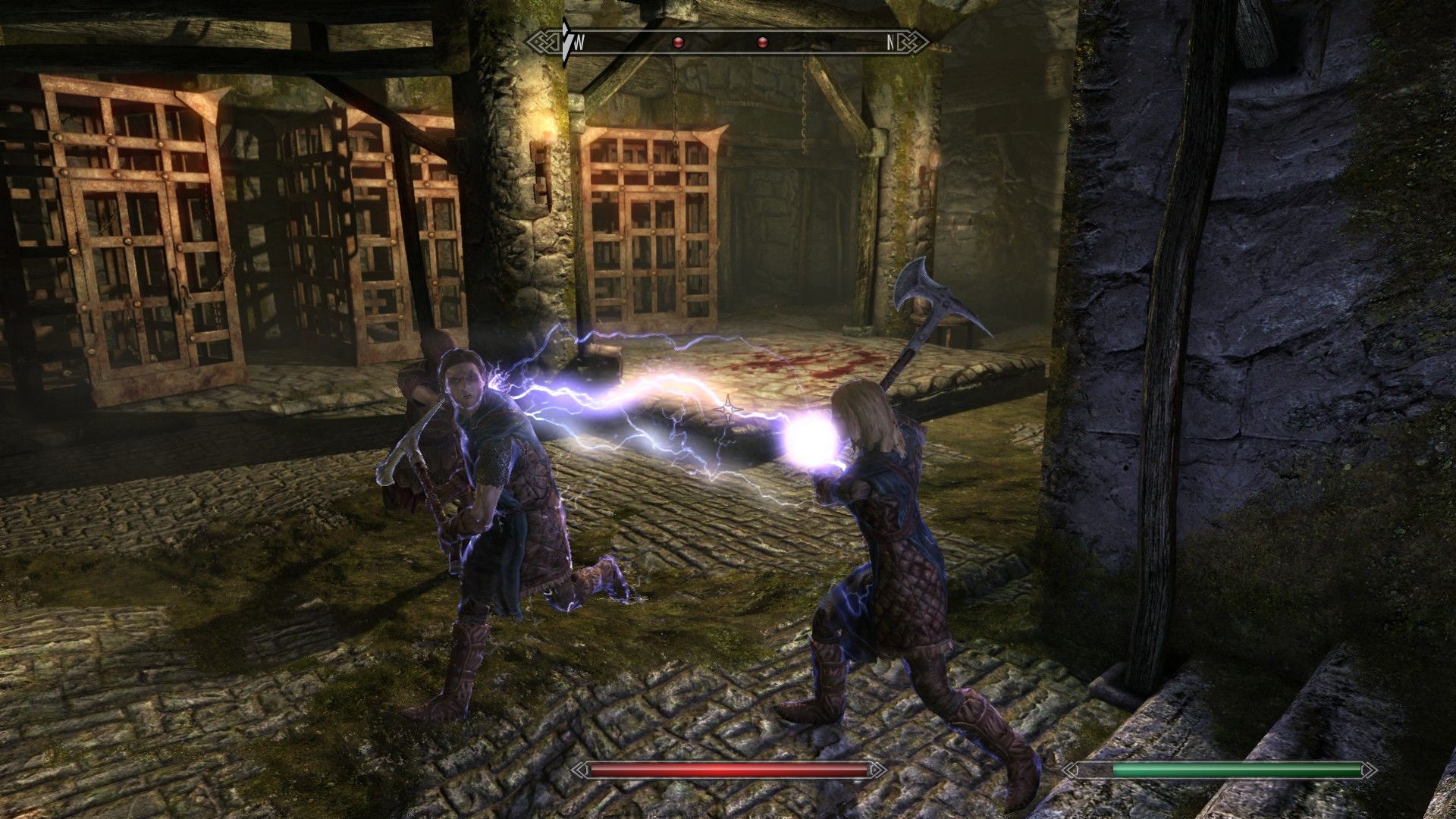 The next room is the torture chamber, where you'll encounter the Torturer, an Imperial mage, fighting a pair of Stormcloaks. What happens here depends on which person you chose to escape with. 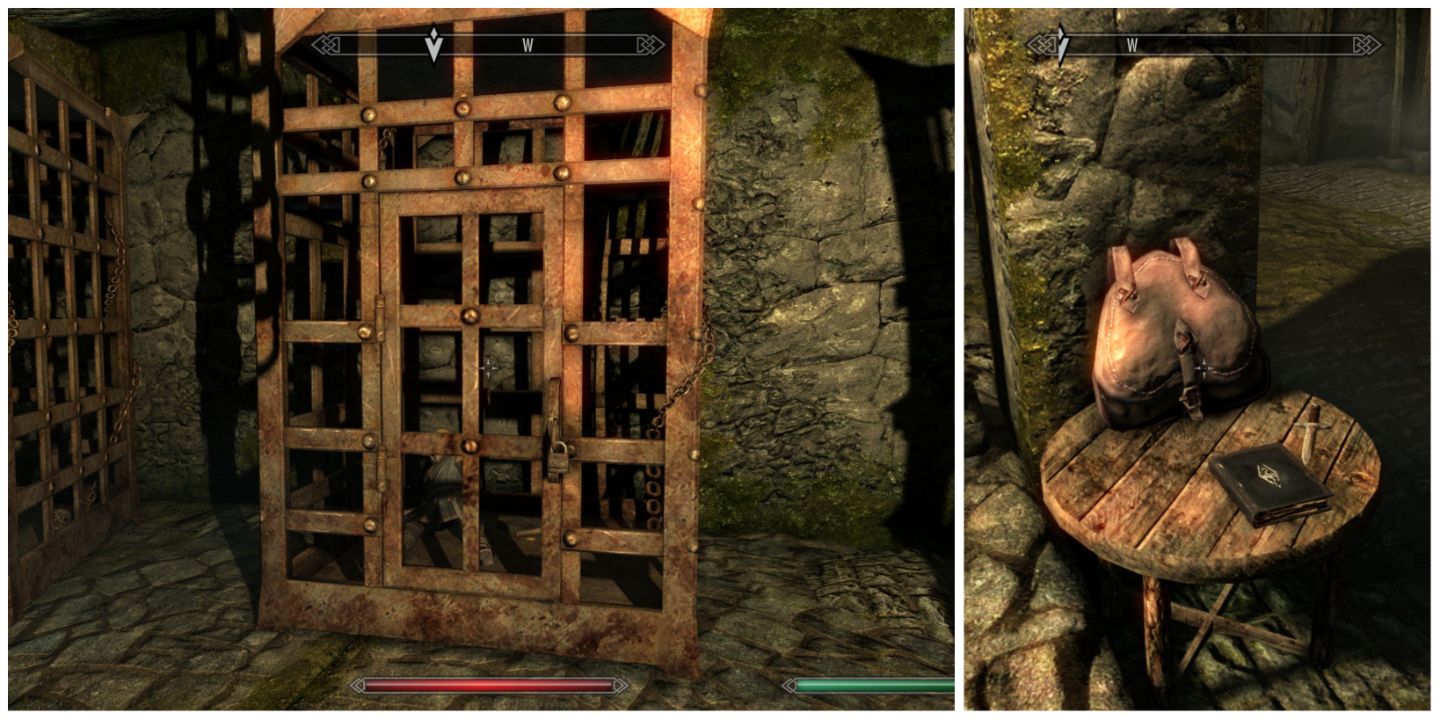 The robes and spell tomes are especially useful if you plan on using magic. 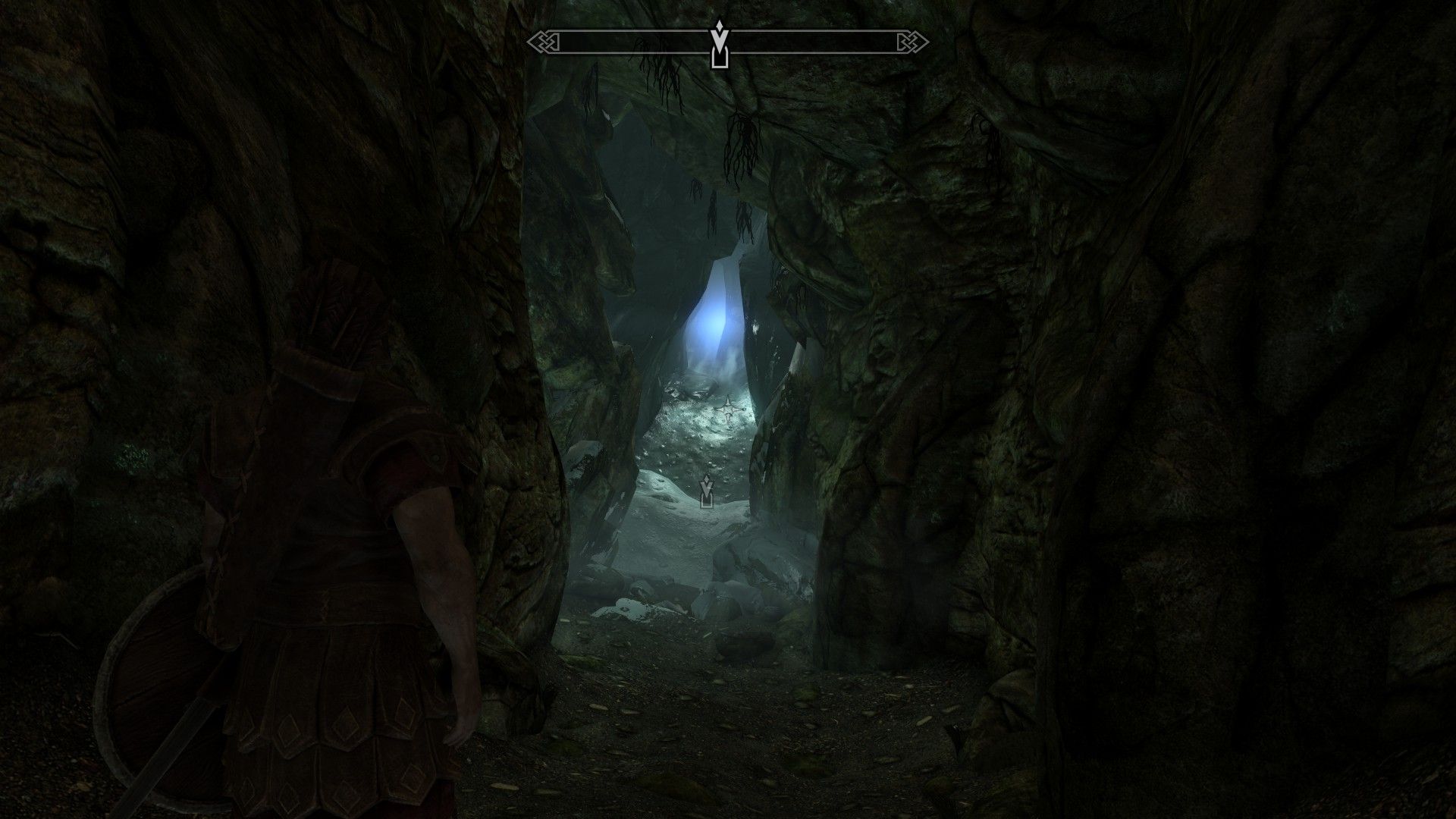 The next area is a large, open room filled with enemies. While it's going to be the largest fight that you've had yet, be mindful of the archers at the back of the room. They can mess you up if you're not careful. Odds are your allies will distract nearby enemies, giving you a chance to eliminate the archers. If you're struggling, use the Flames spell to set fire to the oil at their feet, burning them to death. Make sure to take their bows and arrows. They are useful ranged weapons.

From there, you will need to pull a lever to lower a bridge. Once you cross, you won't be able to return.

By now, you'll be seeing signs of nature thanks to the small stream in the cave. Follow it to a cave full of Frostbite Spiders. These enemies will spit venom at you, damaging you over time. They shouldn't be too challenging but if you're struggling to kill them, try shooting them with a bow while sneaking to thin the herd. Keep going once you're done.

The final challenge is a sleeping bear. Your companion will advise you to sneak past it, which is pretty good advice, given how dangerous they are. Still, if you want to slay it, try starting with a sneak attack using your bow before fighting it however you prefer. Those potions may come in handy, as well.

Once you're done, head out and into Skyrim. Congratulations!

From this point on, you can do anything you want. Skyrim will be yours to explore.