Daedric quests in Skyrim offer some of the strongest items in the game. Some Daedric Princes will grant powerful weapons. Some artifacts offer invaluable utility items. In Boethiah's case, she offers a chest piece that nearly every stealth character will want.

Known as the Ebony Mail, this armor piece cloaks the user in shadow while poisoning nearby targets. This relatively light piece of heavy armor is excellent for keeping stealth characters alive during challenging group engagements. To earn this armor piece, you must complete a quest called "Boethiah's Calling." Here is a complete guide on how to earn Boethiah's favor and earn this exotic piece of armor.

Updated November 20, 2022 by Nicolas Ng: This article has been updated with new tips with the rest of the walkthrough to help you seize your destiny more easily.

How To Start The Quest 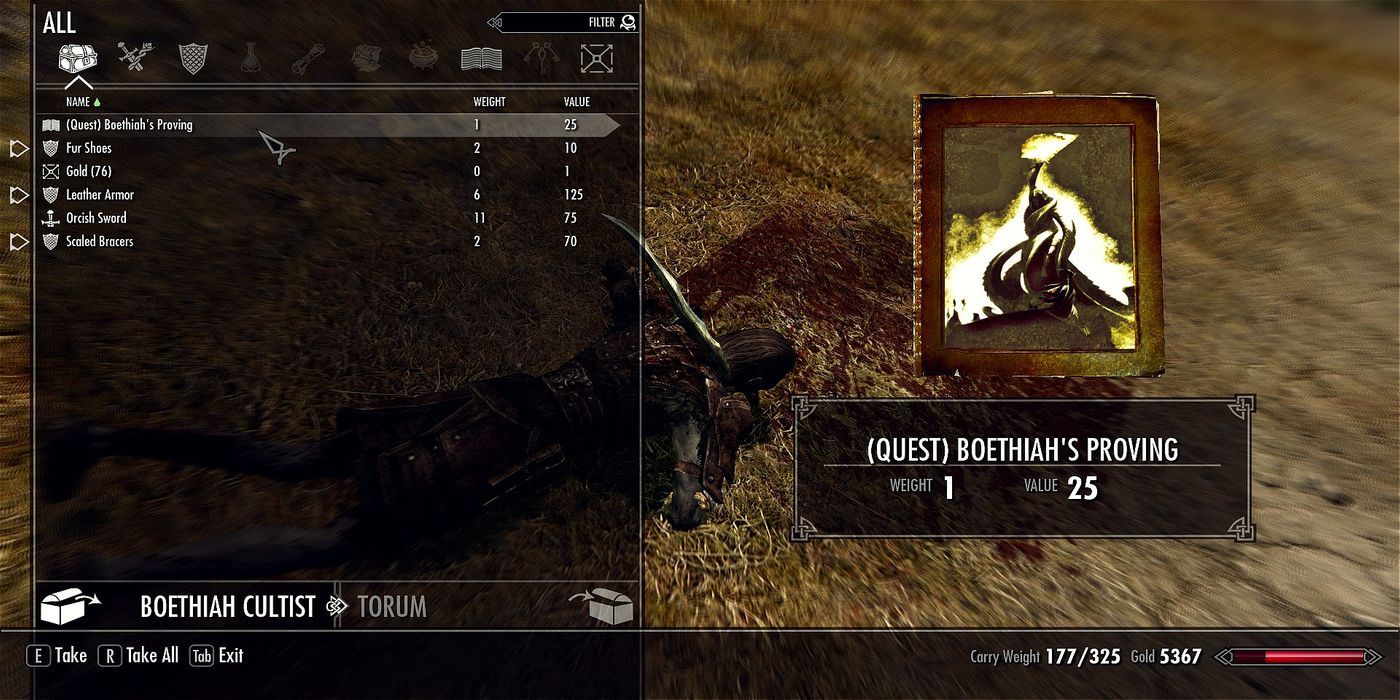 You will not be able to start the quest until you are level 30. The books and cultists will not spawn, and nothing will happen at the shrine until you reach that level.

Suppose you want to skip the book and find the shrine yourself, head east of Kynesgrove until you reach Traitor's Post. Take the right fork on the nearby road to reach the shrine. 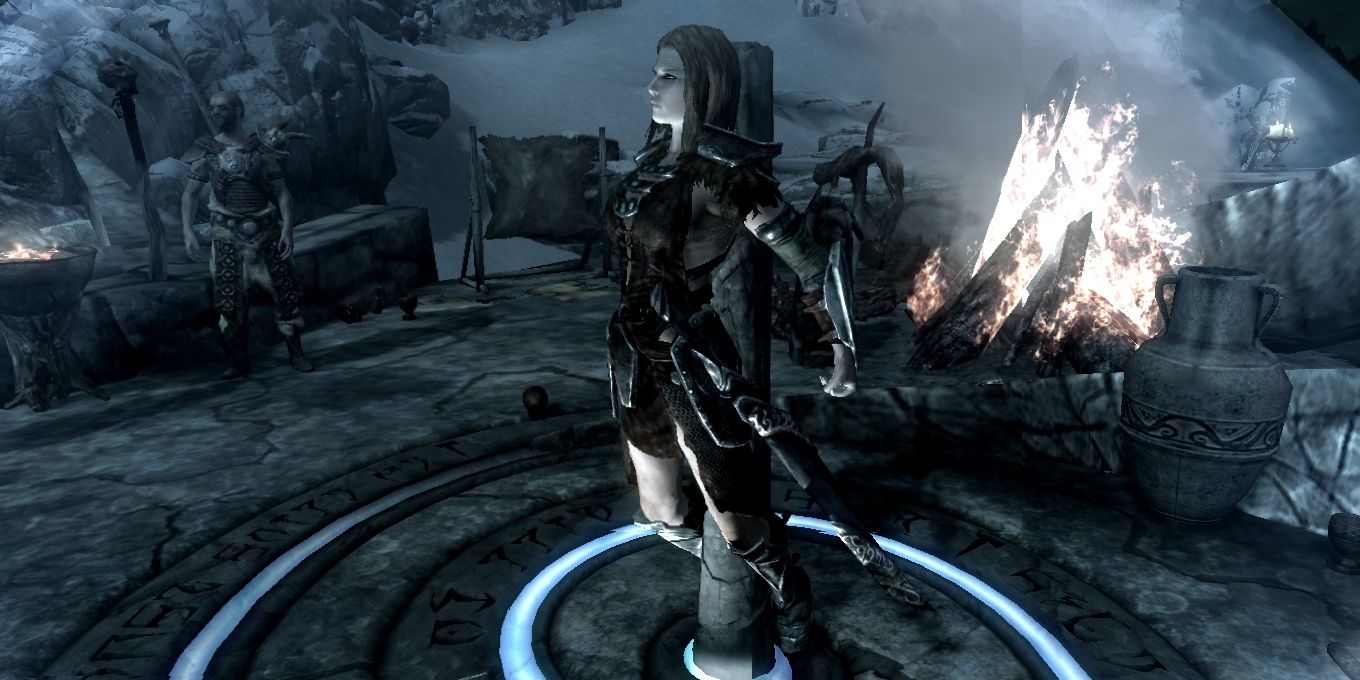 Cultists will surround Boethiah's statue when you approach. Talk to the priestess to start the first quest objective. She will inform you that Boethiah demands a sacrifice. The priest will give you the Blade of Sacrifice and ask you to kill someone you trust.

There are two ways to proceed:

You will need to find a willing follower and bring them to the Sacellum of Boethiah. Only non-essential followers will work for this. Essential followers, such as Aela the Huntress or Frea cannot die and will not be suitable for this step.

If you don't wish to kill a Housecarl or useful companion, you can find a hireling for the sacrifice.

If 500 gold is too expensive, head to Riverwood and help either Faendal or Sven. They give you a short quest that lets you take one as a follower. Their lives are free and nothing of value will be lost by sacrificing them.

At the Sacellum, hold down the interact key and direct your hapless victim to the Pillar of Sacrifice. Once they are trapped, slay them.

Killing every cultist at the Sacellum of Boethiah also works. These cultists can put up quite the fight if you're under-geared, so be sure to bring upgraded weapons and armor before attempting this. Area of effect spells and Shouts do wonders here. 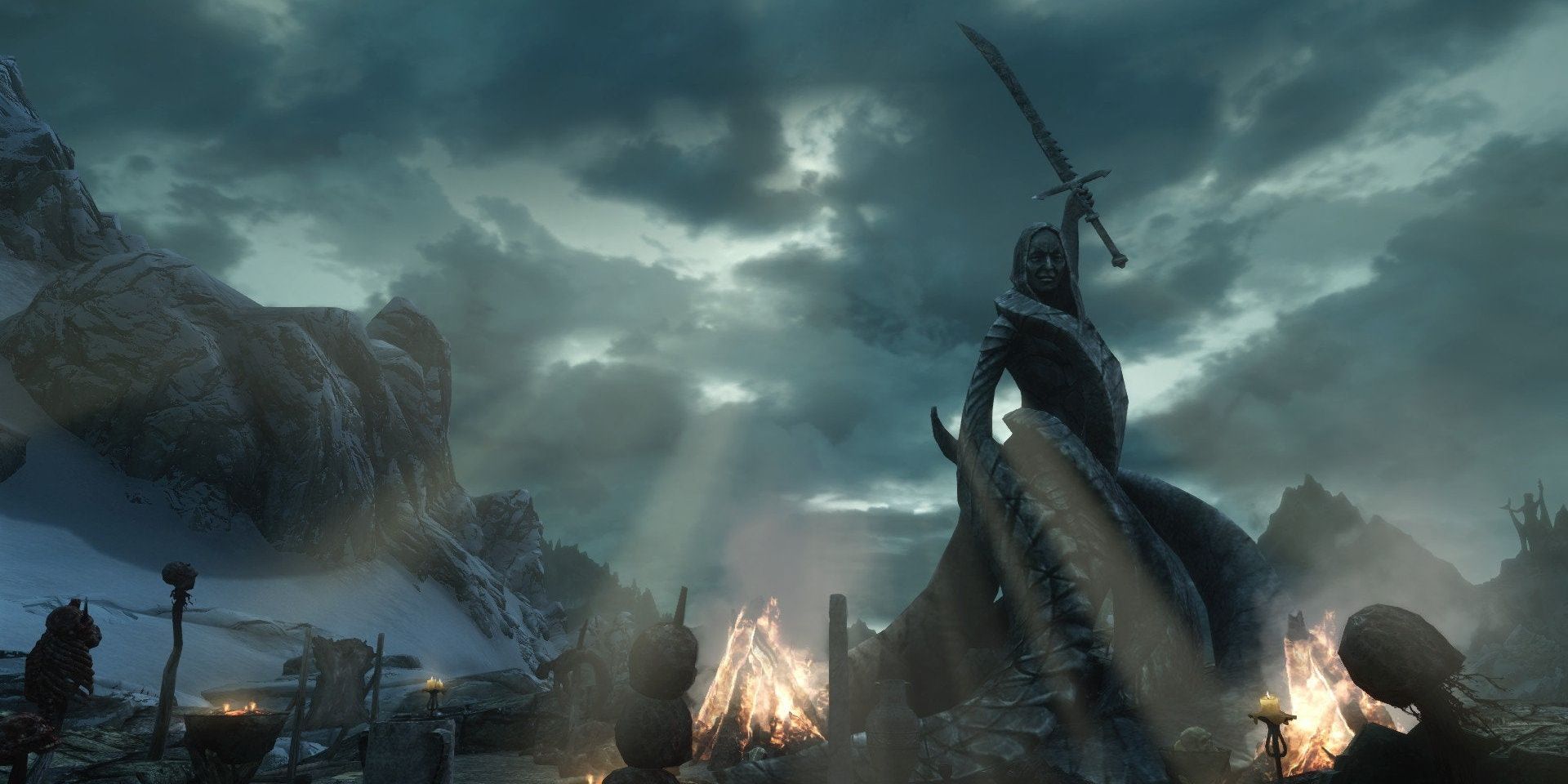 Whether you killed every cultist or sacrificed a follower, Boethiah will begin to speak through a corpse. If you killed a companion, Boethiah will state that she has a task for whoever is left standing. This will cause all cultists to become hostile and attack each other. Kill the cultists to proceed.

You can hang back and let the cultists kill each other instead of getting involved and potentially dying.

Once the cultists are dealt with, Boethiah will offer to make you her champion under one condition: her old champion must die.

Kill The Bandits In Knifepoint Ridge 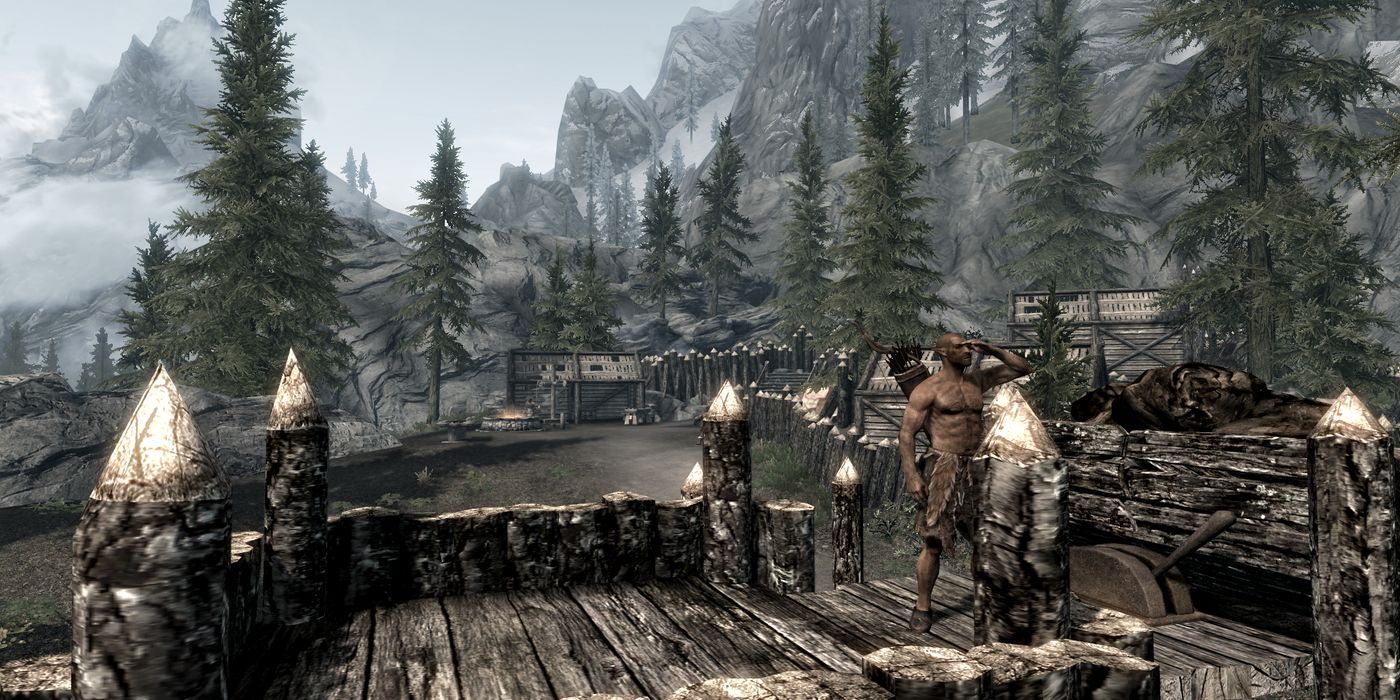 Despite what Boethiah requested, you do not need to use stealth in this dungeon. She will chastise you for using brute force, but this has no impact on the quest. There are two sections to Knifepoint: an exterior bandit camp and an interior mine. Boethiah's Champion can be found in the mine.

Most of this dungeon is linear. Use the shadows, flammable traps, or use sheer aggression to take down the bandits. Once you reach the lowest section of the mine, you will enter a room with the Champion of Boethiah, along with a few bandit guards.

If you can calm the champion, he will have a few lines of dialogue explaining his change in attitude. In essence, he became tired of killing for the sake of a Daedra's entertainment. He is content with dying by your hand.

Killing the champion up-close is somewhat challenging due to the Ebony Mail's enchantment. Using ranged weapons or spells to damage the champion is a good idea. Once you take his life, equip the Ebony Mail chest plate on his corpse to end the quest.

Getting The Ebony Mail 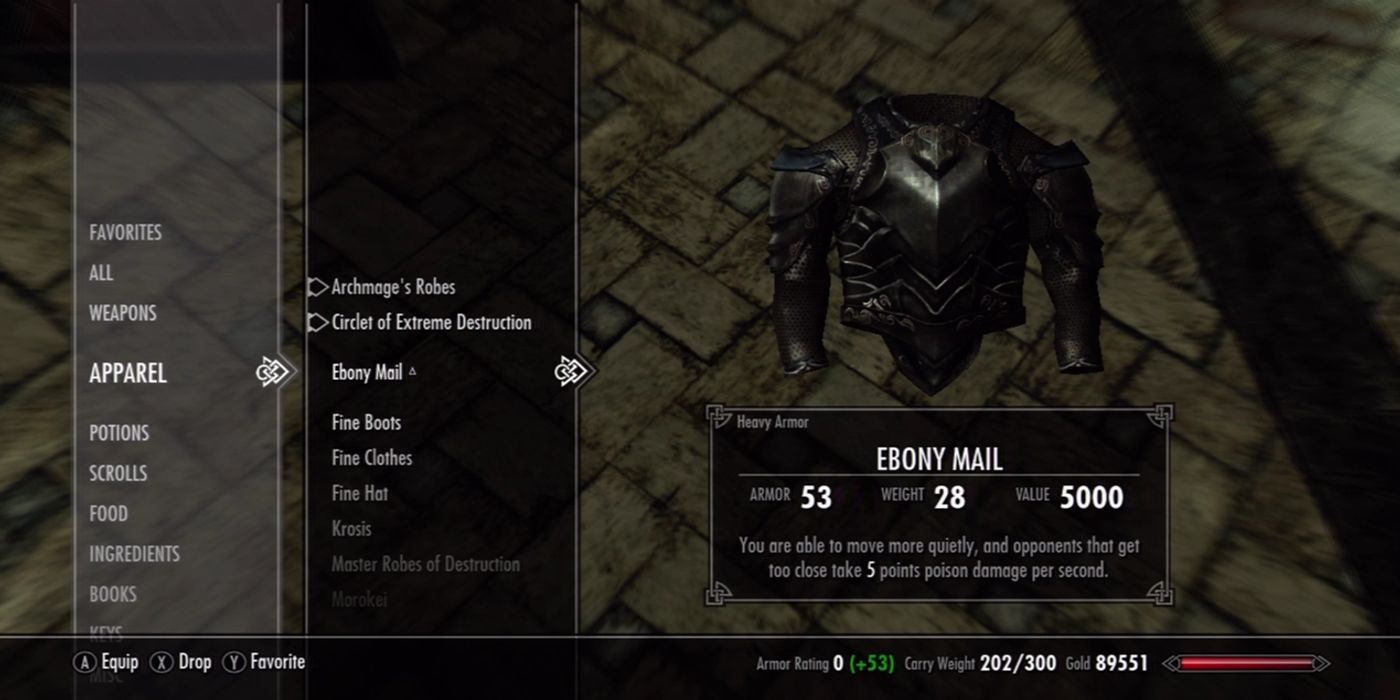 Regardless of how you complete this quest, Boethiah will always give you the Ebony Mail as a quest reward. This Daedric Artifact is a heavy armor chest plate that acts as a stealth item.

Crouching with this chest plate with cloak your character in shadow. The chest plate also has the muffle enchantment, the only non-boot item in Skyrim to have this effect. Additionally, any foe that gets near you takes five points of poison damage per second.

Enemies that are usually immune to poison will take damage from this effect. This includes vampires, Dwemer automatons, and even draugr.

The armor does come with a few quirks:

Ultimately, this item excels at giving players enhanced stealth mechanics while buffing their armor rating. If you love heavy armor and stealth, the Ebony Mail is an item you'll want to own.