You are here:
Home / Skyrim: 10 Side Quests We’d Love To Experience All Over Again

Skyrim: 10 Side Quests We’d Love To Experience All Over Again

As the world impatiently waits for news on The Elder Scrolls VI, there are things we mortals can do to get rid of our Elder Scrolls-related itches. But, of course, that's a replay of Skyrim or any other of our favorite chapters in the series.

With trickster Daedra and as many factions as you could wish for. What are some of the missions in the game that really stuck with us? And really, which ones would we love to play over again for the first time? We could only pick some of them, or you would get bored of this post, so we picked only the most iconic side quests Skyrim offers. 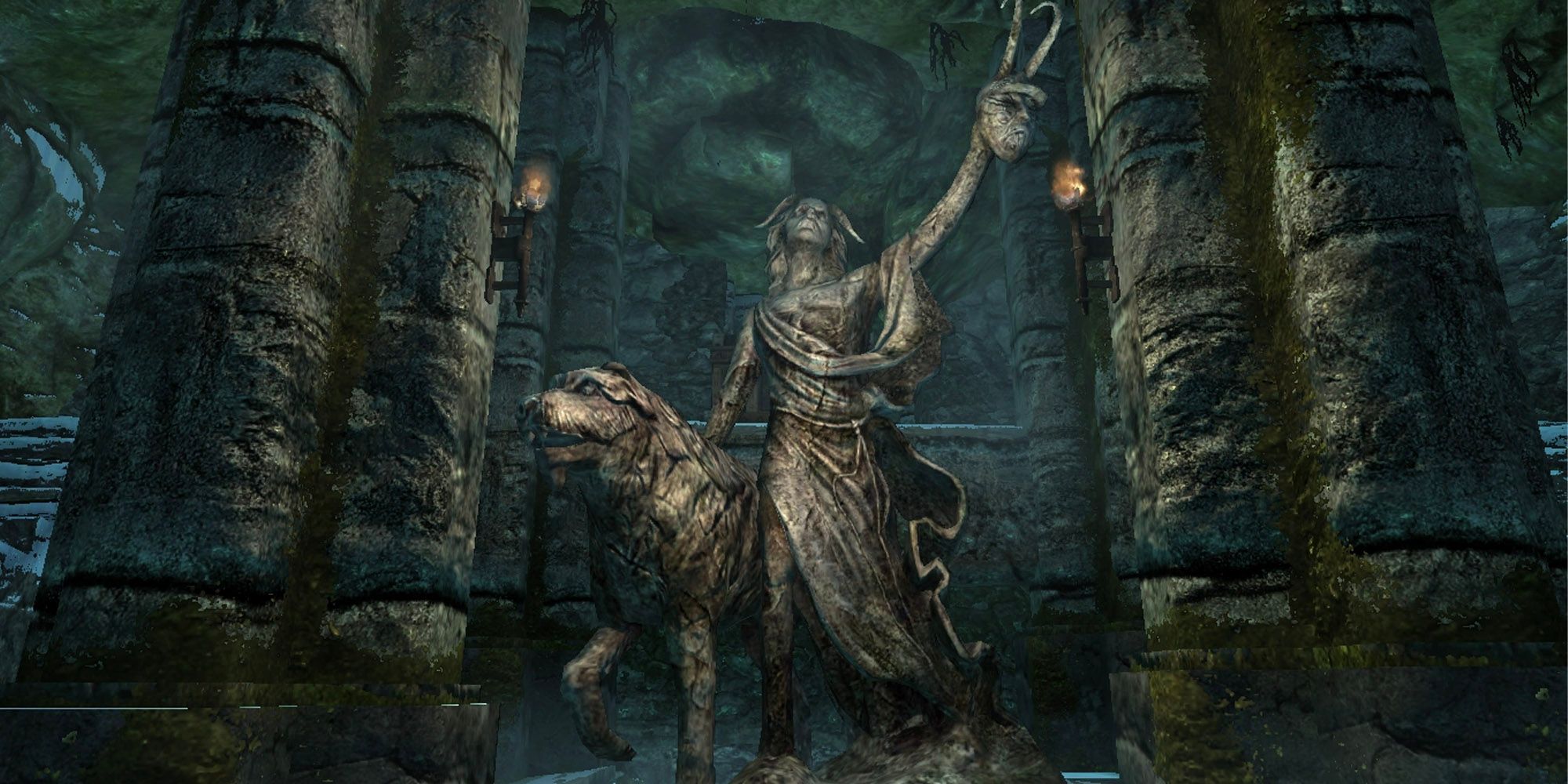 One thing we all love in RPGs is the ability to pet dogs; that's a given. But what about the ability to have a talking dog companion that is no other than a Daedra's Best Friend? Barbas is one of the best dogs to be placed in an RPG; everyone can agree.

A little tip, if you don't want to have Barbas ever leave you, you can not finish the quest, and he'll be a follower until the quest is complete. We get that you want the Masque of Clavicus Vile and the Rueful Axe, but Barbas is a fun companion. 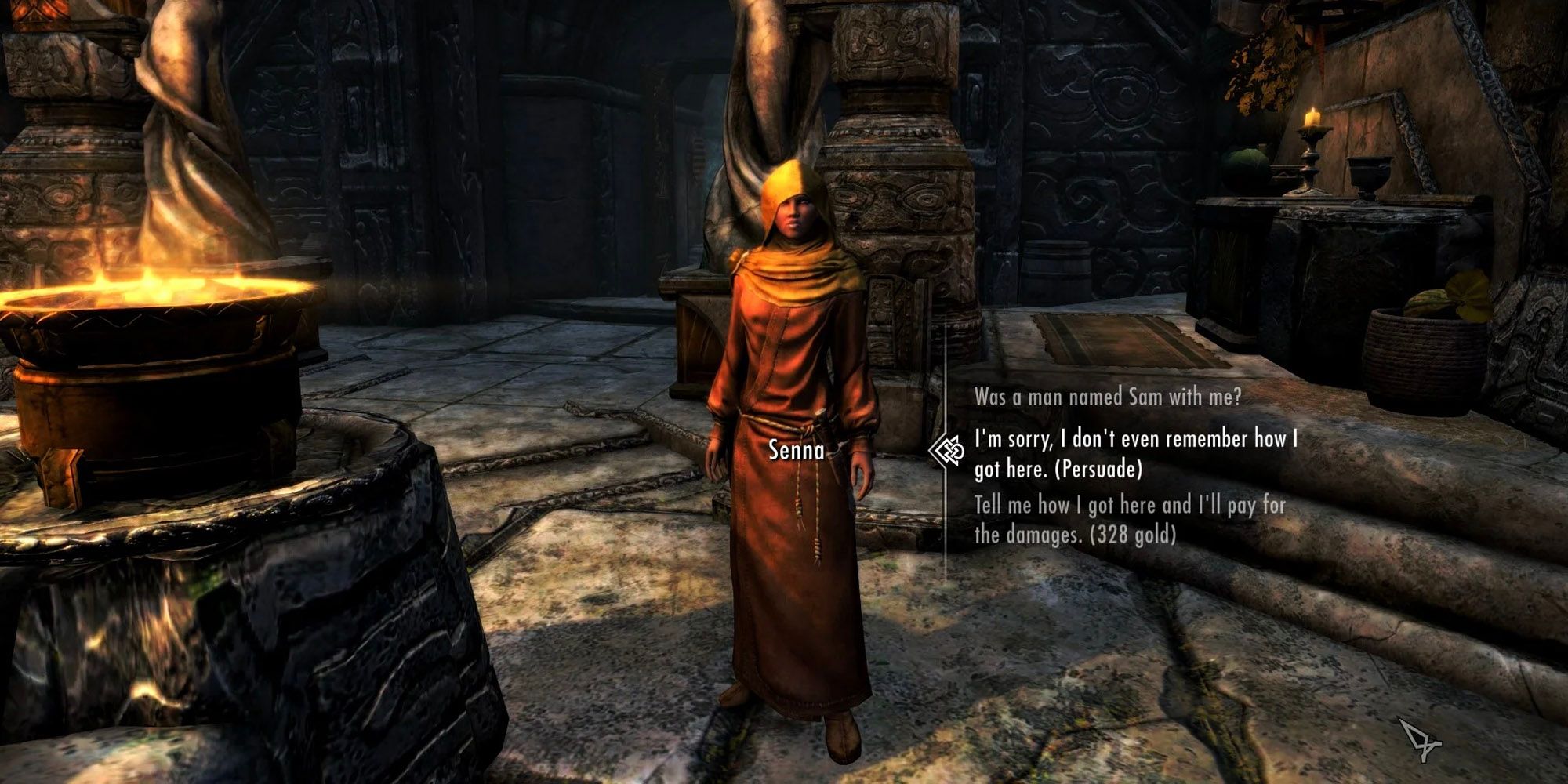 Gaming and drinking games go hand in hand. We're not advising you to play and drink, but when you're about to embark on a 'drinking contest' side quest, you accept it.

A Night To Remember is one of the funniest missions in the game, as you accept to participate in a drinking contest with whom you later learn to be none other than the Daedra Sanguine. Of course, every one of us can't forget the chaos that ensues after. So, if you were lucky enough not to try it out, go out and enjoy this side quest.

8/10 To Kill An Empire/Hail Sithis 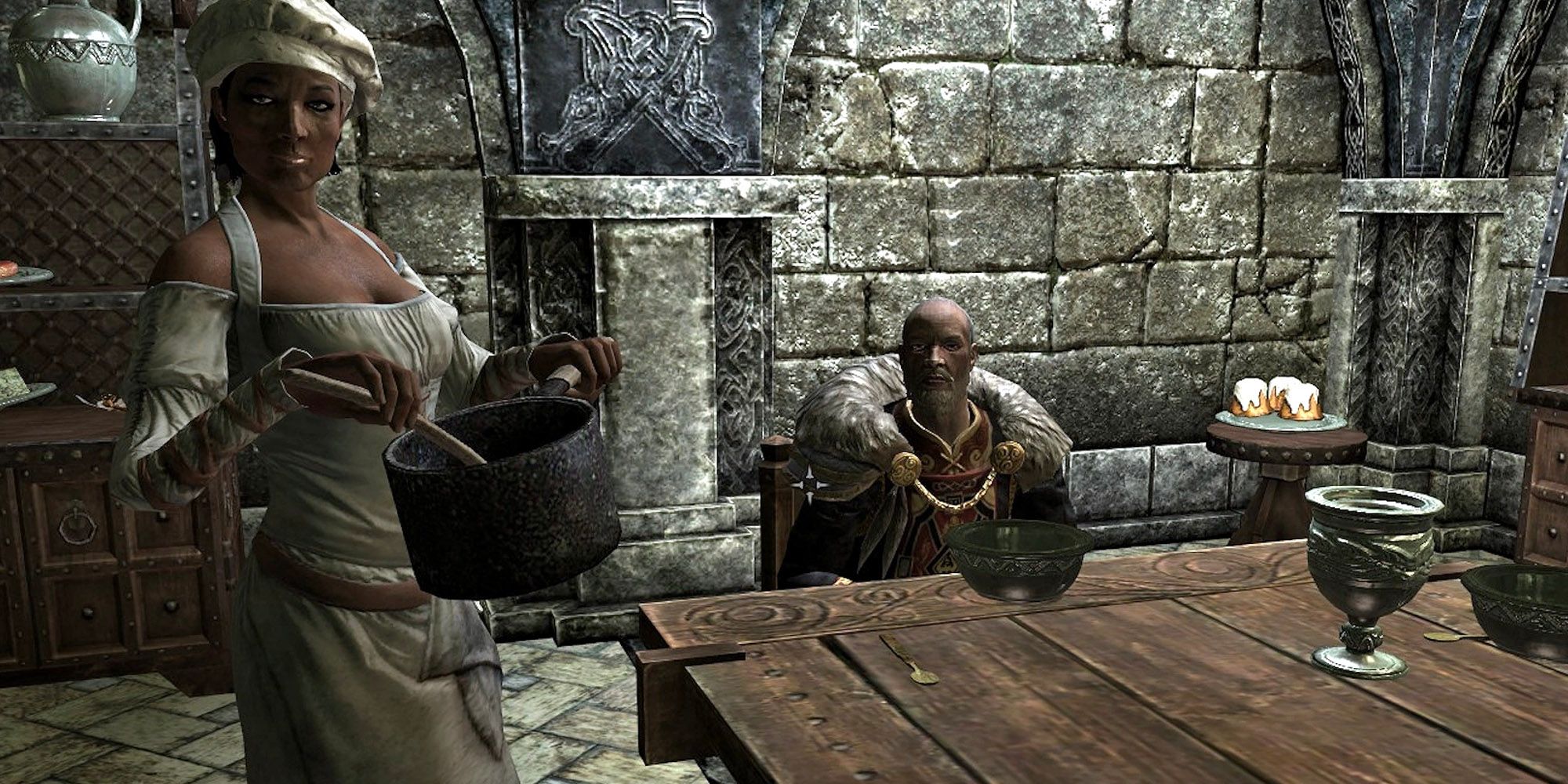 The Dark Brotherhood saga is one of the scariest ones in the game, but it also has some of the best moments to enjoy in the game's minor sagas. From the initiation mission with the three hooded "sinners" to ending it by taking down the Emperor.

We've placed both To Kill An Empire and Hail Sithis, as the combination of the two really gives out the creepiness that comes with working for the Night Mother. And remember, "Hail Sithis!" 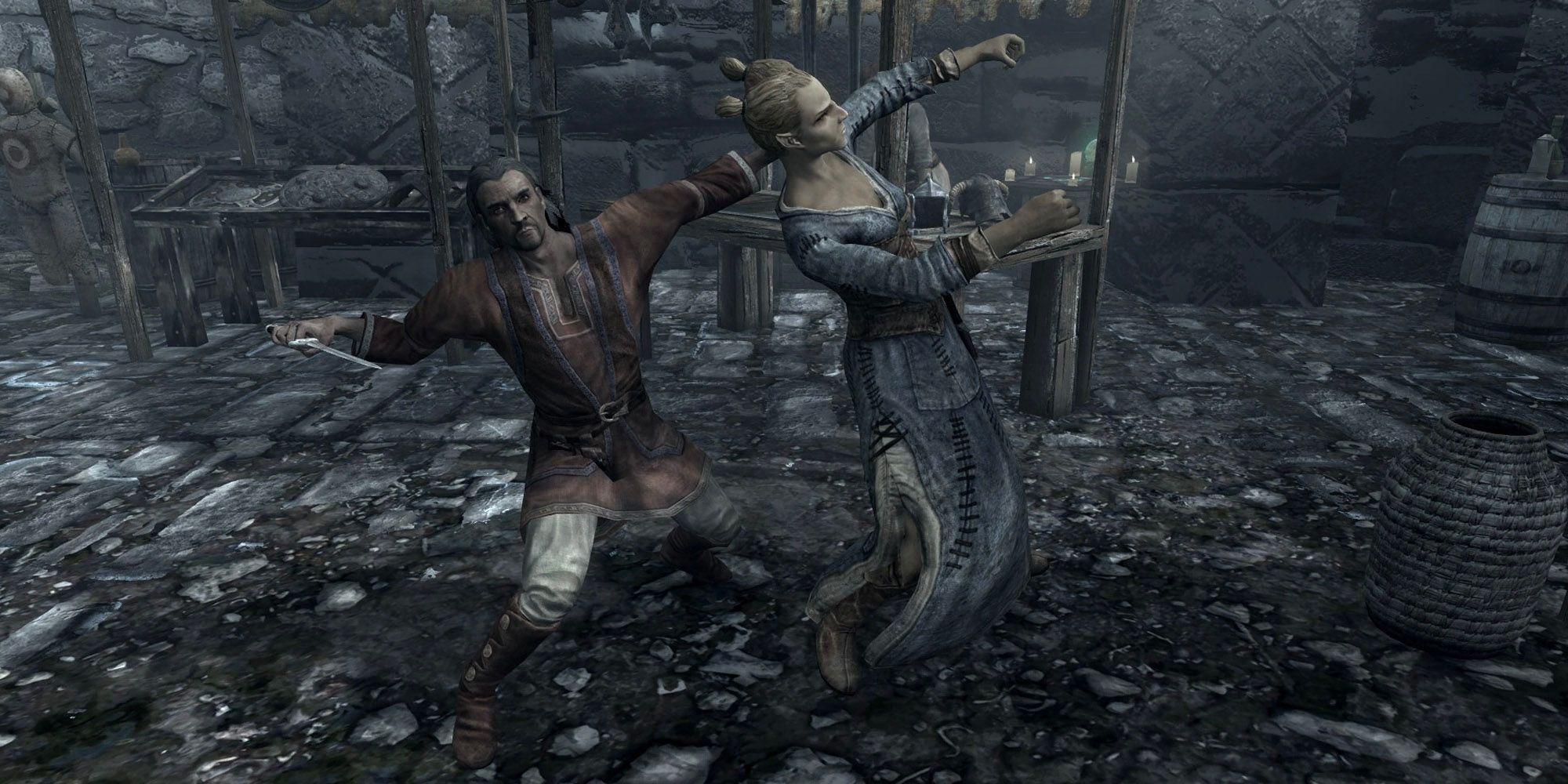 When you arrive in Windheilm, you'll encounter this side quest. Every time someone boots up a new Skyrim session, Blood On The Ice is one of the missions that always get a play-through.

The first investigation mission that is put in front of the Dragonborn, you'll find yourself playing the role of a Skyrim-based Sherlock Holmes on the tracks of the Butcher. This serial killer only goes after young women in the city, a Jack the Ripper-Esque easter egg, if you may. 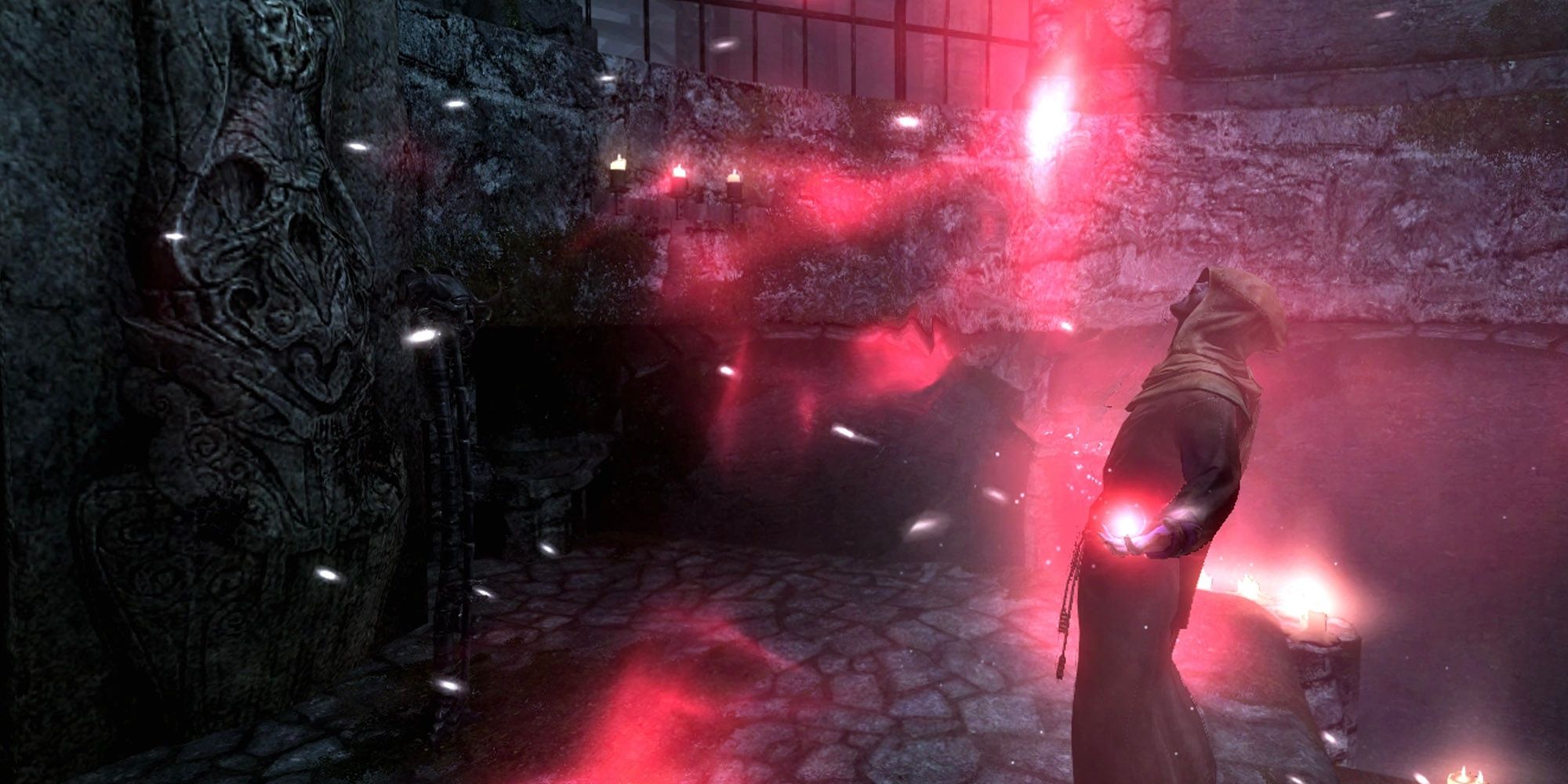 The whole city of Dawnstar is plagued by sleepless nights, and only a Priest of Mara named Erandur seems to know what is causing all these problems. However, when you first arrive and start talking to the townsfolk, you realize that the restless nights are becoming a bit too cumbersome for them.

Those final moments with Erandur are some of the most intense decisions to make in the game. On the one hand, you can save the town by taking away the Skull of Corruption; on the other, have Erandur follow you as a companion. 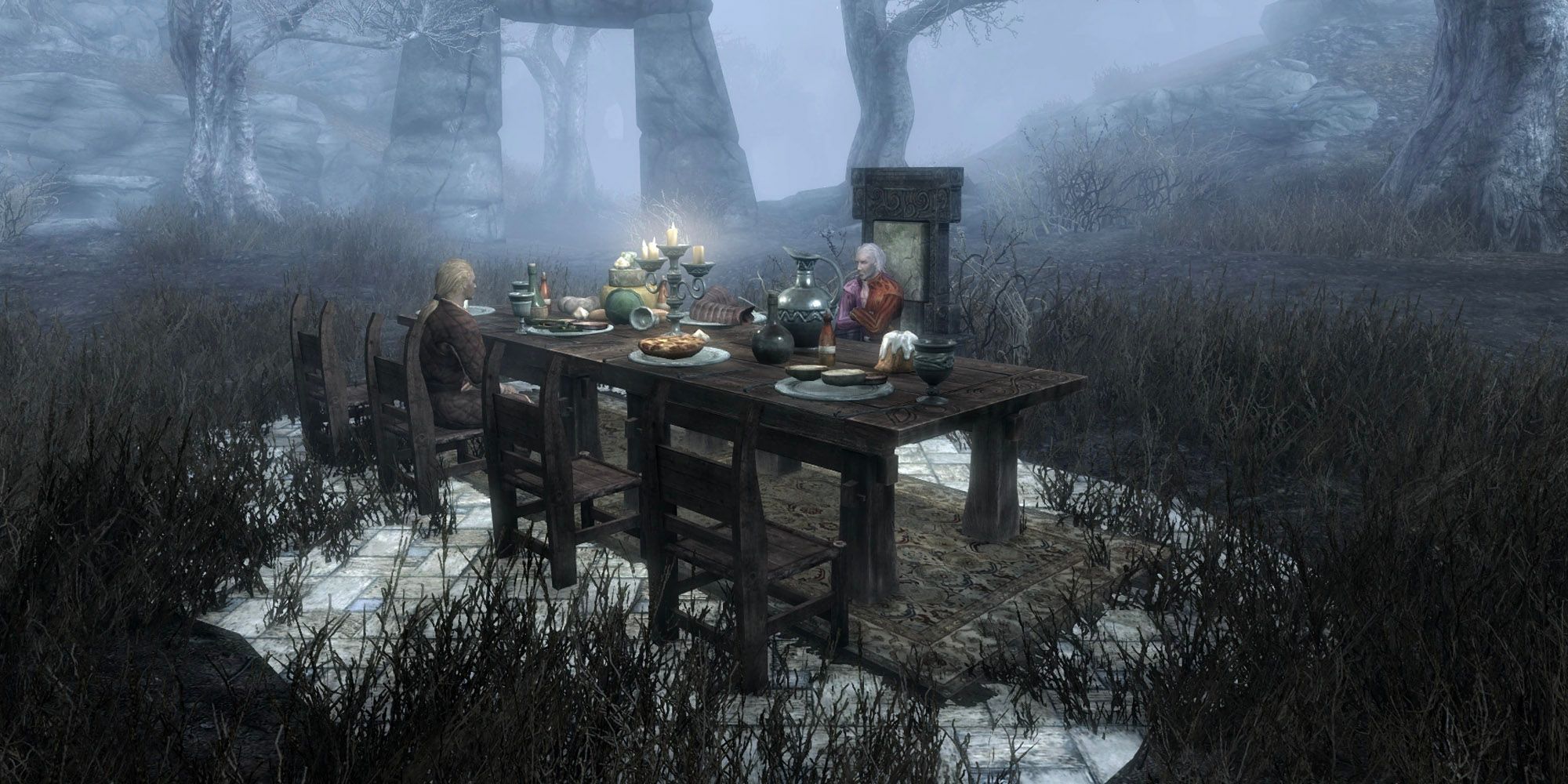 One of our favorite side quests in Skyrim has to be The Mind Of Madness. Just thinking about receiving the Wabbajack once again is a Daedra-send. The mission in which you need to clear Pelagius's mind from his night terrors lets you go down a rabbit hole.

The mission is inspired by the classic Alice in Wonderland tale and has excellent parallels to the story. All the way to a nice little tea party at the end. Also, there's a little Barbas mention if you pay close attention to Sheogorarth. 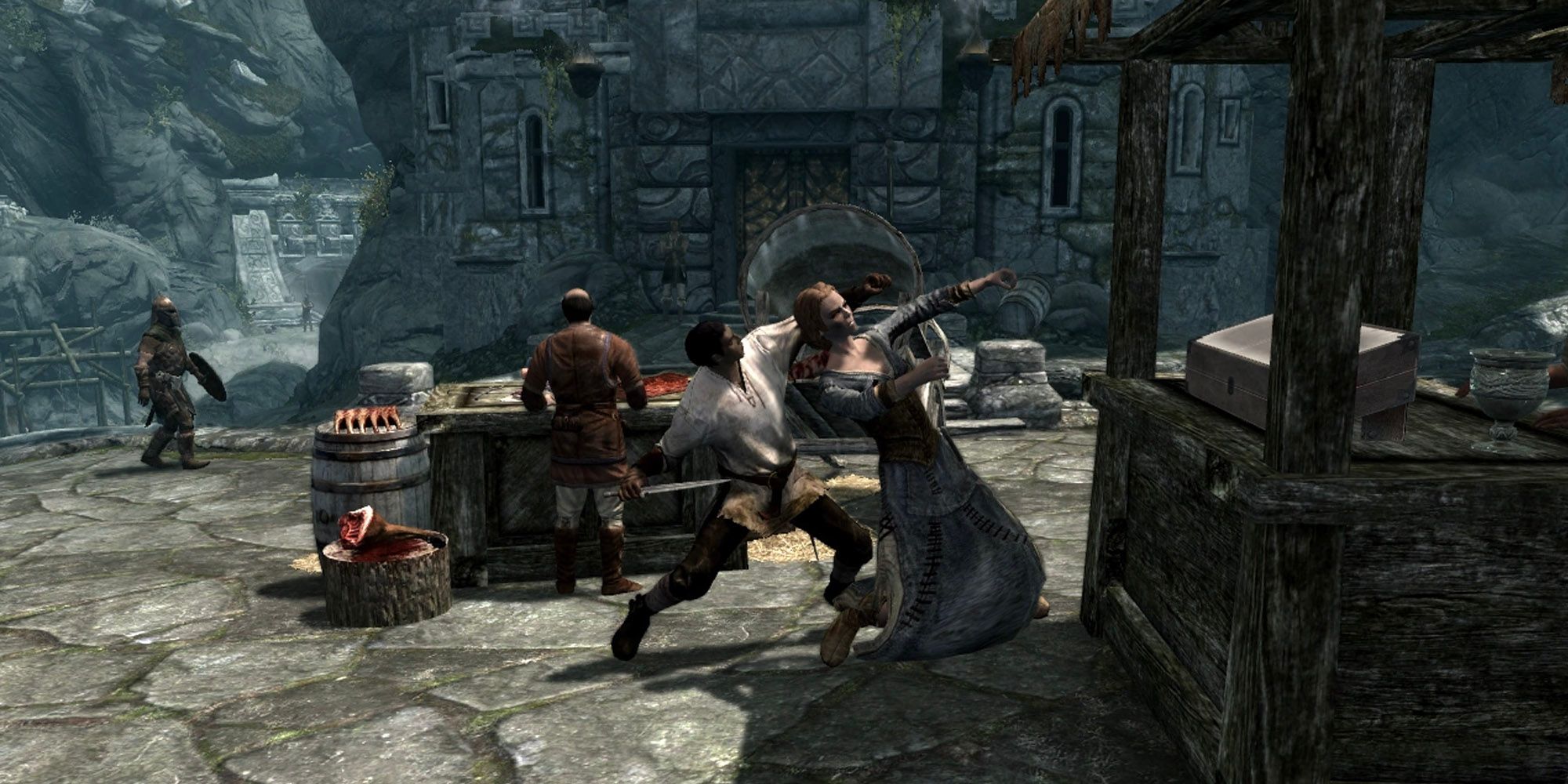 The Forsworn are an odd bunch of humans in Skyrim, loyal to the old ways and having a foothold in the city of Markarth. When you first arrive in the town, you witness a murder in the central square. This triggers the side quests, and it's up to you to find out who is behind it.

Another significant part of this side quest is its ending, where you are forced to go to the mines: The Cidnha Mine. 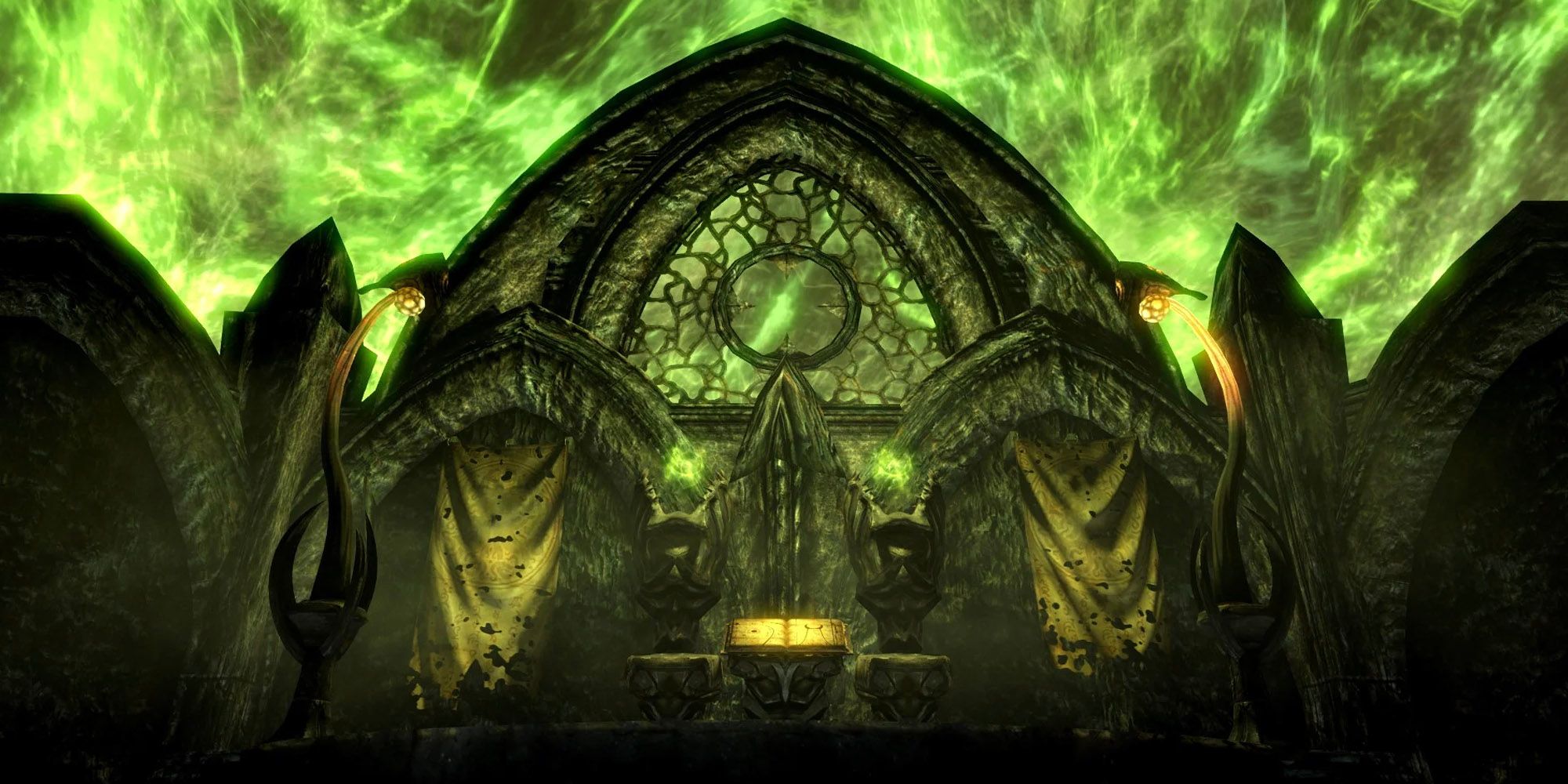 This side quest is available if you've played the Elder Scrolls V: Dragonborn add-on, where you can travel to the island of Solstheim and learn more about Dunmer culture. You will meet Neloth, who asks you to find Hermanaeus Mora's Black Books.

The particular aspect of this quest is that the books aren't in any normal dungeon but in Apocrypha in the Plane of Oblivion. So be ready for beautiful visuals if you've never played this quest. 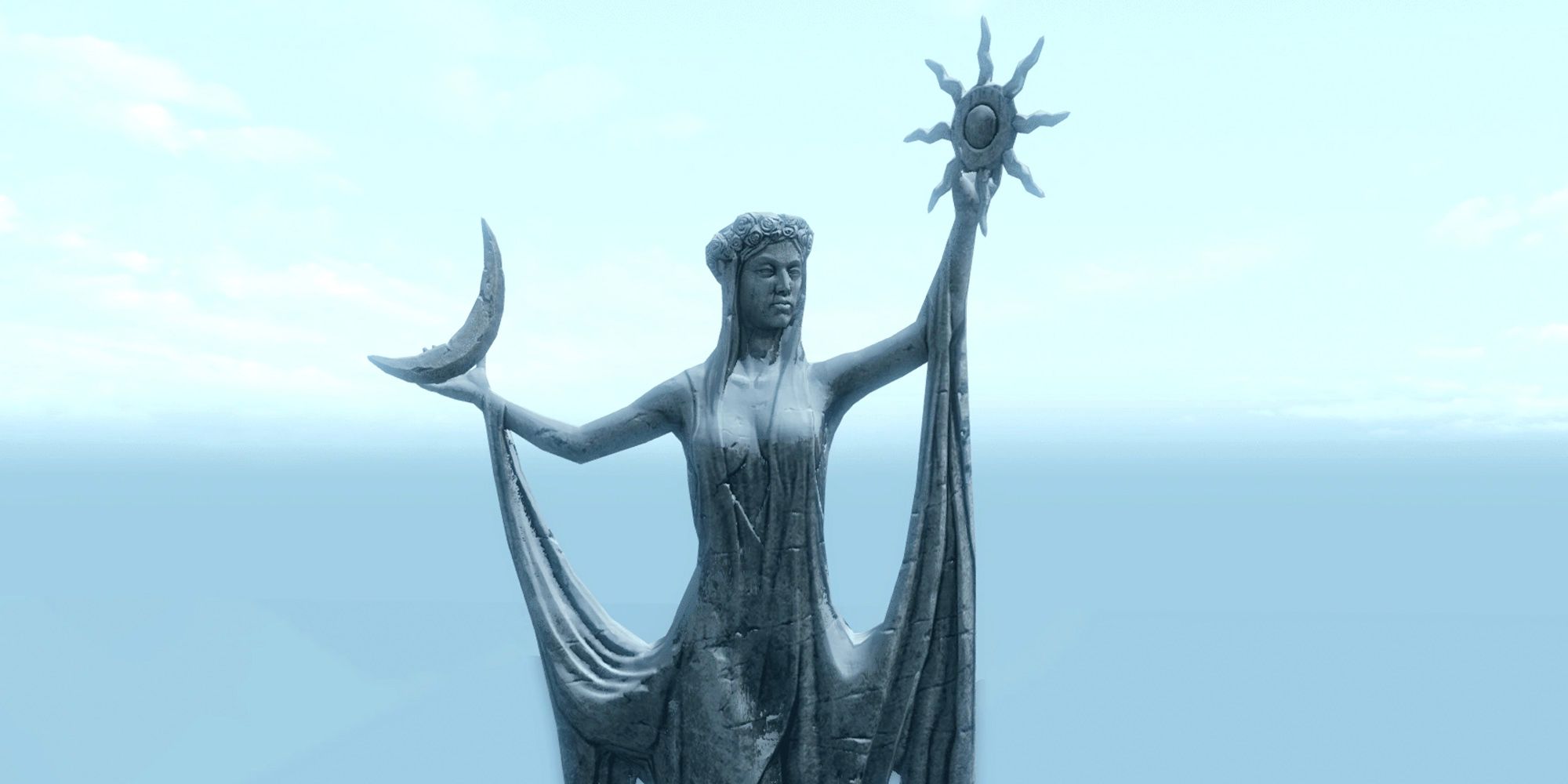 One of the most iconic missions in all of The Elder Scrolls V: Skyrim, The Black Star is a mission we're sure everyone has played through at least once in their Skyrim roams.

When you arrive at the Shrine of Azura built by the Dunmer Ashlanders, you must rid Azura's Star of the corruption brought about by necromancers. Seeing the Shrine in the middle of the mountains for the first time is enough reason to want to play the game from the start. 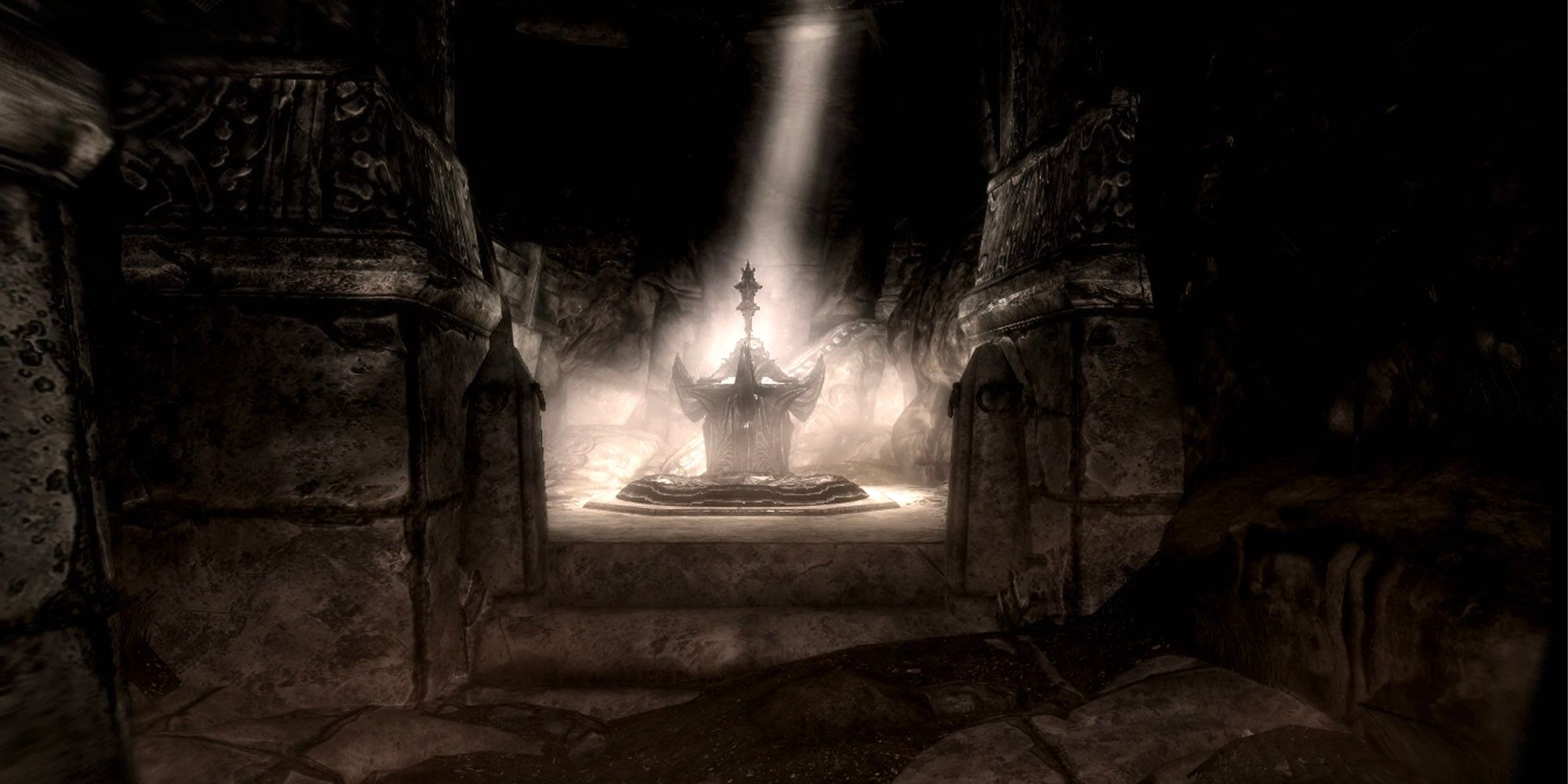 By many, considered one of the most disturbing side quests in Skyrim, The House of Horrors really puts a strain on your ability to choose what you think is best for the region's people. Once you meet Tyranus, a Vigilant of Stendarr, he asks you to join him while seeking to exorcise an abandoned house from the presence of a Daedra.

The only problem is that the Daedra in question is Molag Bal, not a minor Daedra seeking fortune. The forced action you must take to complete the mission can be frustrating for some, but it shows how much power Daedra have over Tamriel.