You are here:
Home / Shin Megami Tensei 5: How To Beat Odin

Taito is the final open-world hurdle Shin Megami Tensei 5 has to offer. Everything has been dialled up a notch, so bosses, exploration, quests, and even basic enemies are noticeably harder to overcome.

Split into three areas, Taito is home to the Hindu, Greek, and Norse Pantheon – Vasuki, Zeus, and Odin. Of the bunch, Odin is the most physically capable, although he has a few tricks up his sleeve to make this more than a mere slobber knocker between would-be gods. 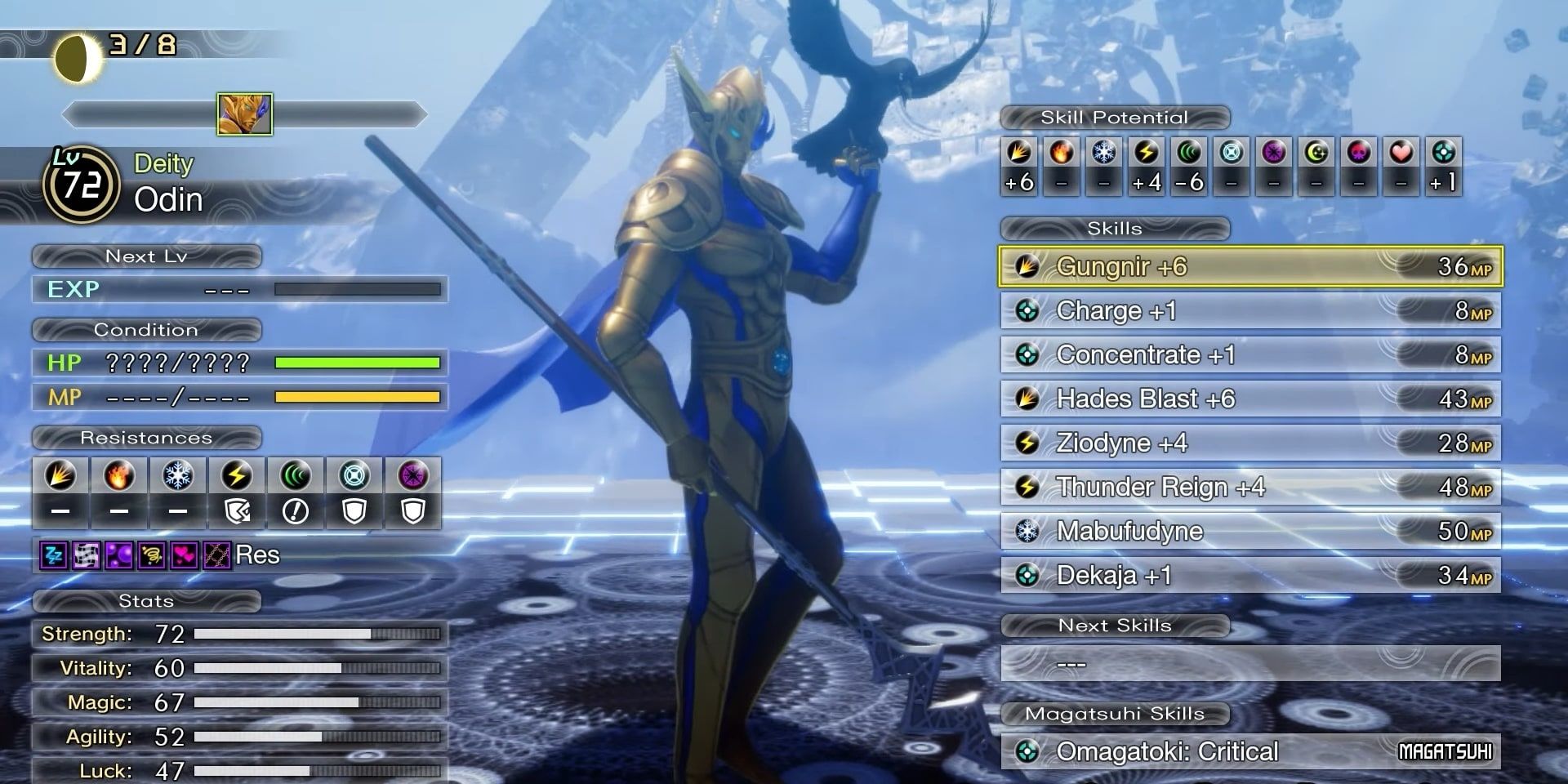 Odin is an incredibly threatening Physical force of nature. To represent this, Odin has one of the highest Physical Potentials in the game, and this is supported by an absolute killer Strength stat of 72.

Topping it all off, Odin comes with a very respectable Potential with Electric, which is backed up by a surprisingly high Magic stat of 67. He also has access to some support Potentials and Magic, rounding off his kit nicely.

Odin is a tricky duck with a kit that is harder to counter than you’d expect from the trio’s brawler boss. His attacks come in hard, they can come in even harder when it wants them to, and he can flat-out ignore your stats.

Gungnir is Odin’s most powerful attack. If this lands, someone is taking a bunch of damage and there is very little you can do about it. This thing deals Severe damage and ignores your defenses. Your only hope is to reduce Odin’s Attack through spells, or decrease his accuracy and pray.

Gungnir is made even more terrifying when Odin preps it with Charge, which adds a substantial damage boost to any attack it precedes. If Odin uses Gungnir after Charge, there is a very real chance that anything he hits will straight up die. If this collides with Nahobino, it could be game over.

Concentrate acts a lot like Charge, however it works on magical attacks. Odin is nowhere near as proficient with magic, so this is less threatening. He also lacks any means to pierce defenses with his magic, so some Electric resistance or immunity will shut this down no bother.

Hades Blast is another Physical attack Odin can throw out, and it’s not a fun time either. Heavy damage in an AoE is still threatening, and if Odin decides to Charge beforehand, your party can take some serious damage. Thankfully Odin lacks a skill like Impaler’s Animus to apply pierce to this attack, so Physical resistance will go a long way here.

Ziodyne, with Odin’s stats, is a fairly dangerous spell but is easily planned for. If it lands, it’ll hurt, but there are plenty of ways to mitigate this, such as – debuffs, resistances, and dampers.

Thunder Reign, like Ziodyne, can be a pain if it lands, but it really shouldn’t be landing. Because it is striking multiple times, it is especially vulnerable to being accuracy-debuffed into oblivion.

Mabufudyne is Odin’s Magatsuhi attack, which means it’s a waste of time. He has no Potentials in Ice magic so it won’t do much if it lands, but it will never land. Bring Ice Dampers and delete his turn.

Dekaja is Odin’s final skill, and it changes up how you can engage with him. Simply put, you won’t be able to buff up your party in this fight. To counter this, just use debuffs to get the same effect. Lowering his attack and accuracy should be a priority.

Odin shares most of his resistances with Zeus surprisingly enough. He reflects Electric damage, and he is completely immune to Light and Dark. Odin’s Achilles heel is his weakness to Force. As is the case from here on out, Physical damage has better scaling than Magic, so bringing brawlers to the fight instead of Force users is viable. 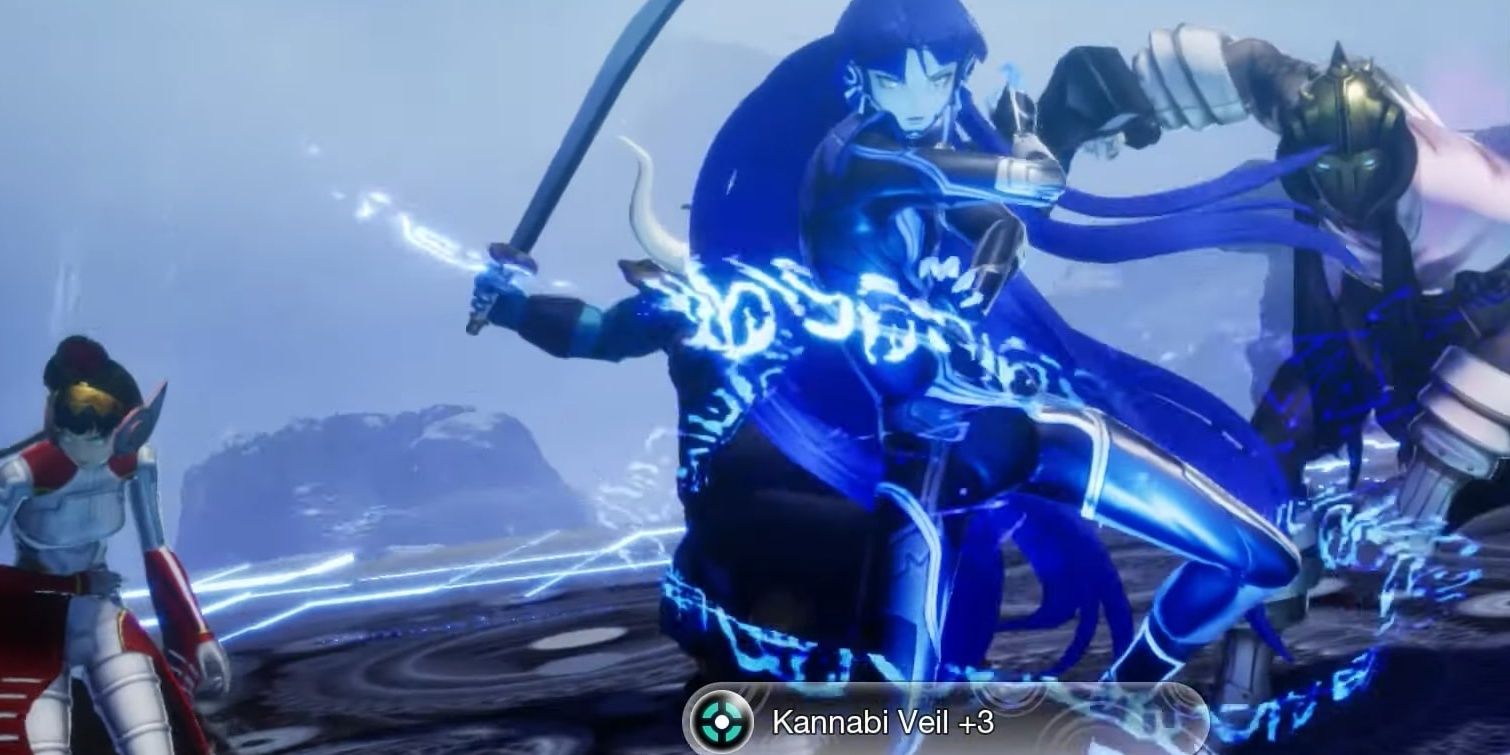 The best way to deal with Odin is to bring a tank and spank party. This will require a beefy demon who can take a bashing and a bunch of aggressive demons who lay into Odin like there is no tomorrow.

Remember, support demons are very powerful in their own right, but support skills can be put on any demon – even your offensive ones. This can give you a bit more wiggle room when designing your party.

Rangda is the glue that holds this team together. Rangda is one of the very few demons who can reflect Physical attacks as standard, making her a fantastic tank. She isn’t perfect, however. You will need to put some work into turning Rangda into the indestructible beast she should be.

Firstly, you want to transfer as many nulls and/or resistances as possible onto Rangda. The most important are Electric and Ice, and both of these can be done with Fusion. Demons like Skadi and Lillith will sort that right out, and you can cover the rest of her weaknesses with essence transfers.

Rangda is also a decent Force user, making her useful for generating bonus turns when attacking. This is just icing on an already amazing cake.

Things to remember when using Rangda – firstly, Taunt is not 100 percent effective, and Odin will sometimes ignore it. You will need to make sure your entire party is capable of taking a hit – especially Nahobino. Secondly, Gungnir will punch straight through your resistances, so be prepared to revive if Rangda can’t take a direct hit. You could also take Enduring Soul.

Odin’s son, Thor, is fantastic in this fight. Heck, he’s fantastic in all the Taito boss fights. His physical capabilities are not to be underestimated, and he doesn’t care about Odin’s Electric attacks.

With very little effort you can transfer Physical Resistance onto Thor making him much harder to shift – even when Odin is throwing out charged Hades Blasts. Consider transferring Catastrophe to boost his damage as well as Physical Pleroma.

If you don’t want to transfer stronger attacks onto Thor, remember his strongest native attack scales based on his current health. Have Thor placed after your healer in the party lineup to maximize his damage.

Mara is the perfect brawler for this fight. Similar to Thor, Mara doesn’t care about Odin’s Electric magic, and with some transfers, can be made resistant to his Physical efforts.

You will want to transfer Physical Pleroma onto Mara too to boost the already potent damage that Hell Thrust delivers. Finally, Toxic Spray, whilst unlikely to Poison Odin, will lower his defense. This is a great way to debuff Odin without having dedicated support.

Fuu-ki is more of a utility pick. In terms of stats, Fuu-ki is not great – his Magic and Strength stats are seriously lacking for a demon of his level. That being said, Fuu-ki has access to Zandyne, has a great Force Potential, and has native Force Pleroma which helps make up for it. Fuu-ki also comes with Masukunda which can be used to lower Odin’s accuracy, which is something you really should be doing.

Unfortunately, Fuu-ki is weak to Electric which makes him vulnerable to both Ziodyne and Thunder Reign. You will need to transfer Electric resistance onto him at the very least.

Seth is akin to a Red Mage in this fight. He has great stats, and he has the Potentials to match. His base kit has access to the auto-critting Yabusame Shot, the swingy Madness Nails, and Mazandyne. Transferring Physical and/or Force Pleroma will help push Seth to the next level, as well as a single-target Force spell, like Zandyne or Zanbarion to save on MP consumption.

Mot is probably the strongest dedicated Force caster available for this fight. Mot comes with Zanbarion, a fantastic Force spell that will take chunks out of Odin. He also comes with High Restore, which helps recover some of the MP used when casting Zanbarion. Mot backs up this great combo with a great Magic stat and Force Potentials to move.

If you can get Force Pleroma onto Mot, then he becomes even more powerful. Like Fuu-ki, however, Mot is weak to Electric which is a no-go in this fight. To counteract this, transfer Electric resistances. 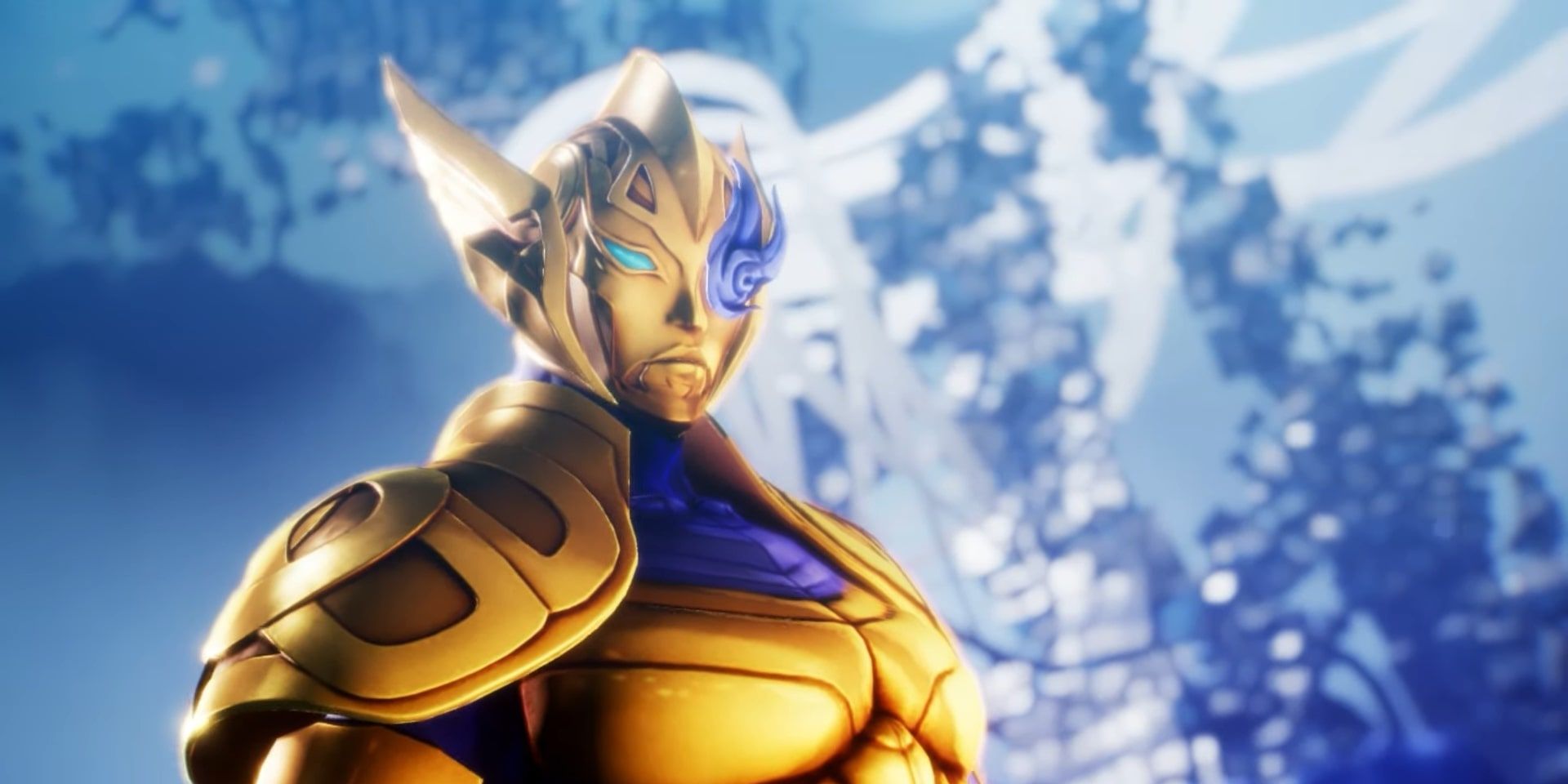 Keeping Nahobino alive should be your top priority. The best way to do this would be to bring Physical resistance, and, if possible, some Electric. Just bear in mind that nothing will stop Gungnir, so if this lands, you are going to feel it.

Besides this, having Nahobino pull his weight in combat will help too. Magic Nahobino’s should try and get Zanbarion, whilst a Strength-based one should focus on Murakumo from Aogami Type-0. This Almighty attack deals great damage as standard and will do bonus damage on a critical. Consider boosting this will something like Murderous Glee.

Kannabi Veil continues to be a fantastic support spell too. This will stop Odin from krumping your party with AoE attacks, and dampen Gungnir’s damage. A great spell to have in your lineup.

You will want to bring three Ice Dampers to keep Odin’s Magatsuhi turn shut down. It only costs 450 Macca, and it is well with that small investment. If you want to be especially aggressive, pick up three Electric Dampers and throw them out to catch Odin’s Ziodyne and Thunder Reign. This can give you three full turns of non-stop aggression at the start of the fight if you are lucky.

Gems and Shards are ideal for giving you extra turns when trying to cycle your party. You could also use Pass, but this allows you to do that, whilst inflicting some minor damage. You will want to bring Force gems for this fight. 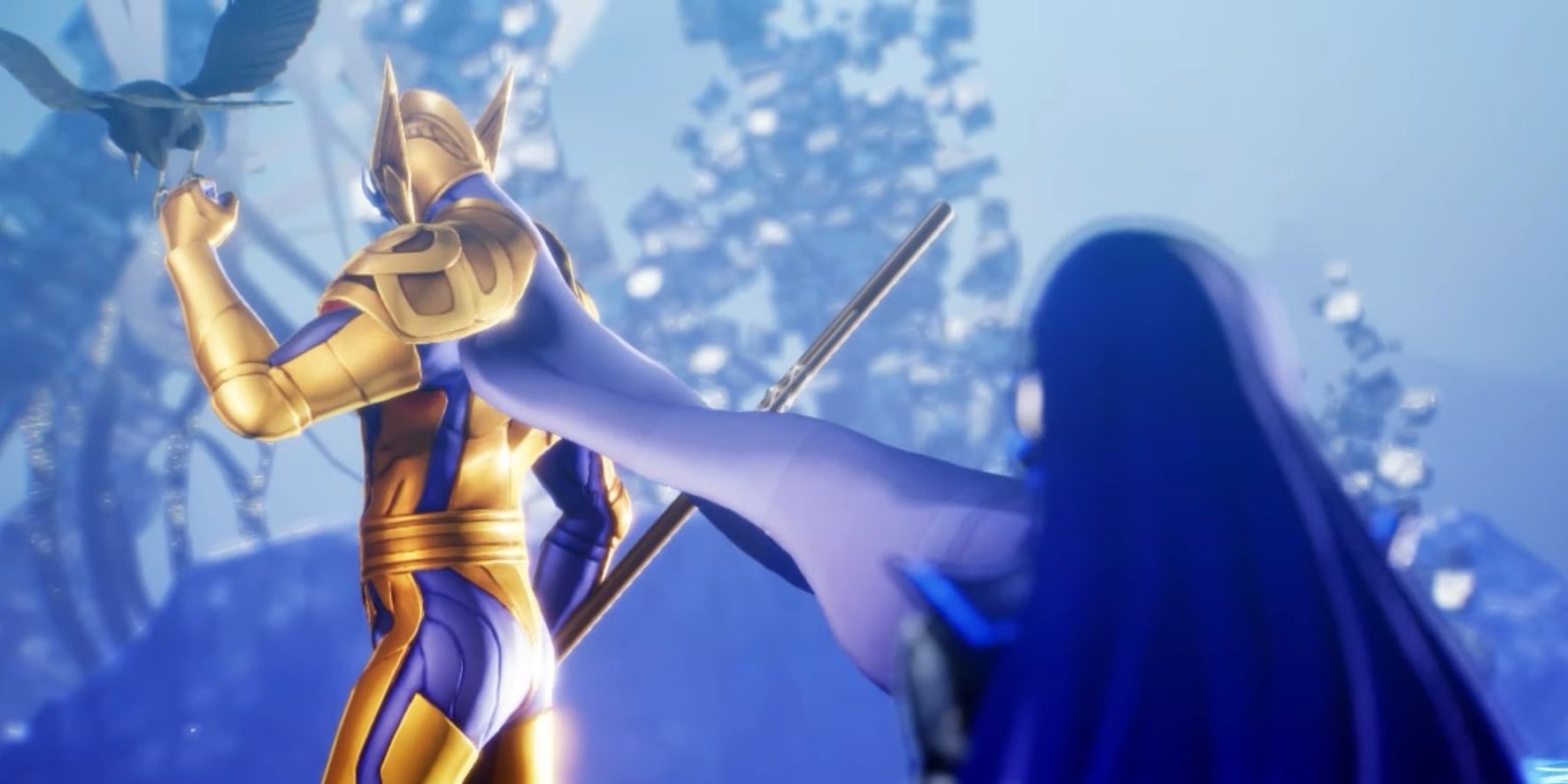 First things first – Odin might just win with a lucky Charge+Gungnir straight into Nahobino’s face. If he crits, that’s pretty much Game Over right there with no counterplay. If this happens, then you got unlucky. Reload and try again.

Your game plan should be to have Rangda cast Taunt every three turns to keep Odin busy (most of the time). Because you spent time, effort, and resources prepping for this fight, Rangda should be almost immortal, giving you plenty of turns to lay into Odin without much issue.

Whilst Rangda is tanking, you should spend some time lowering Odin’s accuracy and/or attack to take the edge off of Gungnir. A few Sekundas here or there will do the trick. Once he is nicely debuffed, lay into him with your strongest attacks.

Odin is a tough cookie, but with a concentrated offense, he will go down without much hassle. If Rangda dies, then quickly revive and get her back into the fight.

With Odin down, you are one step closer to leaving Taito.