For many years, Monkey Island creator Ron Gilbert said he’d never make another game in the series unless he owned the IP. The LucasArts franchise was acquired, along with the rest of the company, by Disney in 2012, and since then, Gilbert has made some attempts to get the rights back. While Disney wasn’t prepared to relinquish Monkey Island to Gilbert, they were still able to work a deal that would give his studio, Terrible Toybox, the opportunity to finally return to Monkey Island.

I sat down with Gilbert and co-designer Dave Grossman, who co-wrote and programmed the first two Monkey Island games, at PAX West in Seattle last weekend to talk about coming back to the series after all these years, and what it’s like to work with Disney on their own original creation.

“It’s not that we want to make the game and just ignore everything everyone says,” Gilbert explains when asked about sharing creative control with the House of Mouse. “Disney has been wonderful to work with. They’ve had notes about the game, some are good, some we say ‘Hey, that’s a really good idea, let’s do that. Some of them [we] wouldn’t like. We have basic control, but we also just take ideas that people have. Any good idea can go in the game.”

Gilbert and Grossman have been working on Return to Monkey Island in secret for the last two years until it was announced on April Fools’ Day on Gilbert’s blog the Grumpy Gamer – an inside joke for fans who are well aware of Gilbert’s dislike for the holiday. In that time, the studio has found a completely new look and style for the game that Monkey Island fans have never seen before. Gilbert says it was important for them to make something that didn’t feel like it was stuck in the past, both visually and mechanically. He recognizes that players are different today than they were 30 years ago. They have different interests, busier lives, and there are a lot more games competing for their attention. “I think those are things that you have to adjust for, but still try to be true to the thing that you’re building,” he says.

One of the ways Terrible Toybox is modernizing Monkey Island is by adding a hint system. Gilbert recognizes that players are a lot more impatient when it comes to getting stuck on a puzzle. Now that they can look up the answer on the internet, they don’t want to spend as much time trying to figure it out for themselves. He decided to integrate a hint system in order to help players find the solutions without resorting to walkthroughs. While Gilbert admits it's discouraging that people give up on puzzles so quickly, he discovered through focus testing that the kind of old school problem solving that made classic adventure games so difficult and rewarding wasn’t actually essential to enjoying the game.

Gilbert told me about watching some beginners play the game. “It was interesting to watch them play because they would hit a problem, and they would immediately go to the hint,” he says. “It was just like five, maybe ten seconds of thinking about it [before] the hint button.” At first, it horrified him, until he realized it didn’t bother them at all. “They loved the game,” he says. “There was nothing about going to that hint button that distracted, in any way, from their enjoyment of the game.” Gilbert believes that giving people more options will allow them to enjoy the game the way they want to play it. “We’d rather not have them jumping on the internet and trying to scroll through a 20 page walkthrough to find the exact thing and have it tell them exactly what to do,” Grossman adds. “We want to give them something contextual that hints them gradually towards the solution so they can still have that [moment of] ‘Oh! I get it!”

Another challenge of the modern era was figuring out how to tell a story that doesn’t confuse new players, while also moving things forward and keeping things interesting for fans. “I think the approach Dave has taken on a lot of this is to reintroduce characters that matter,” Gilbert says. “When Guybrush meets them, yes Guybrush has [met them] before, but they can reintroduce themselves to get people caught up in their relationship and they’re dynamic.”

“So that’s sneakily slipping all that stuff into whatever conversation is happening,” Grossman says. “I gained some useful experience working on games for kids the previous decades because you have to be working on two levels. You’ve got to be working for the kids and for the adults who are playing with the kids. You have to give it to the kids without boring the adults. It’s a very similar challenge to do something for an experienced audience and an inexperienced one.”

There are those among that experienced audience that take issue with Return to Monkey Island catering, to any degree, to a new audience. Earlier this year, Gilbert wrote in his blog about his disappointment that there was so much negativity and hostility from certain fans about the new art style. “When I started this game my biggest fear was Disney wouldn't let me make the game I wanted to make but they have been wonderful to work with,” he wrote. “It’s ironic that the people who don’t want me to make the game I want to make are some of the hard core Monkey Island fans. And that is what makes me sad about all the comments.”

I asked Gilbert about what effect writing that blog post had, and how he feels about it today, some four months later.

“It certainly didn't change anything about how we make the game,” he says. “We very much believe in this game and the art style and all the choices, and it did not influence that at all. I think what it did influence for me, is just the amount of stuff I shared with people.” For many years Gilbert has used his blog to show behind-the-scenes work and reveal making-of info about his games, but he no longer feels comfortable sharing that kind of content. “ I felt like I could not do that,” he says. “I felt the negativity. It wasn't from a larger group of people, it was a very small, very vocal group. But I was disappointed because I was looking forward to sharing a lot of stuff about the design in this game and some of the trade-offs we made and stuff. And I felt like I just could not share anymore, because if I did, it would just become the same people hyper-focused on why the decision we made was wrong, not understanding everything else. That was disappointing for me.”

Gilbert says he still doesn’t feel comfortable sharing insights on his blog the way he used to. “I’m active on Twitter, we do Monkey Island Mondays and stuff, but I don’t really feel like I can share insights into why we made the decisions we made because they’ll just get picked apart.”

Gilbert doesn’t think the hyper-critical negativity is anything new. People have always ranted to their friends about creative choices in comics, film, and games, but now they have a platform to share those criticisms with the entire world, including the people that actually made the art. “I don’t think anything’s changed,” he says. “Except that everyone has a megaphone.” 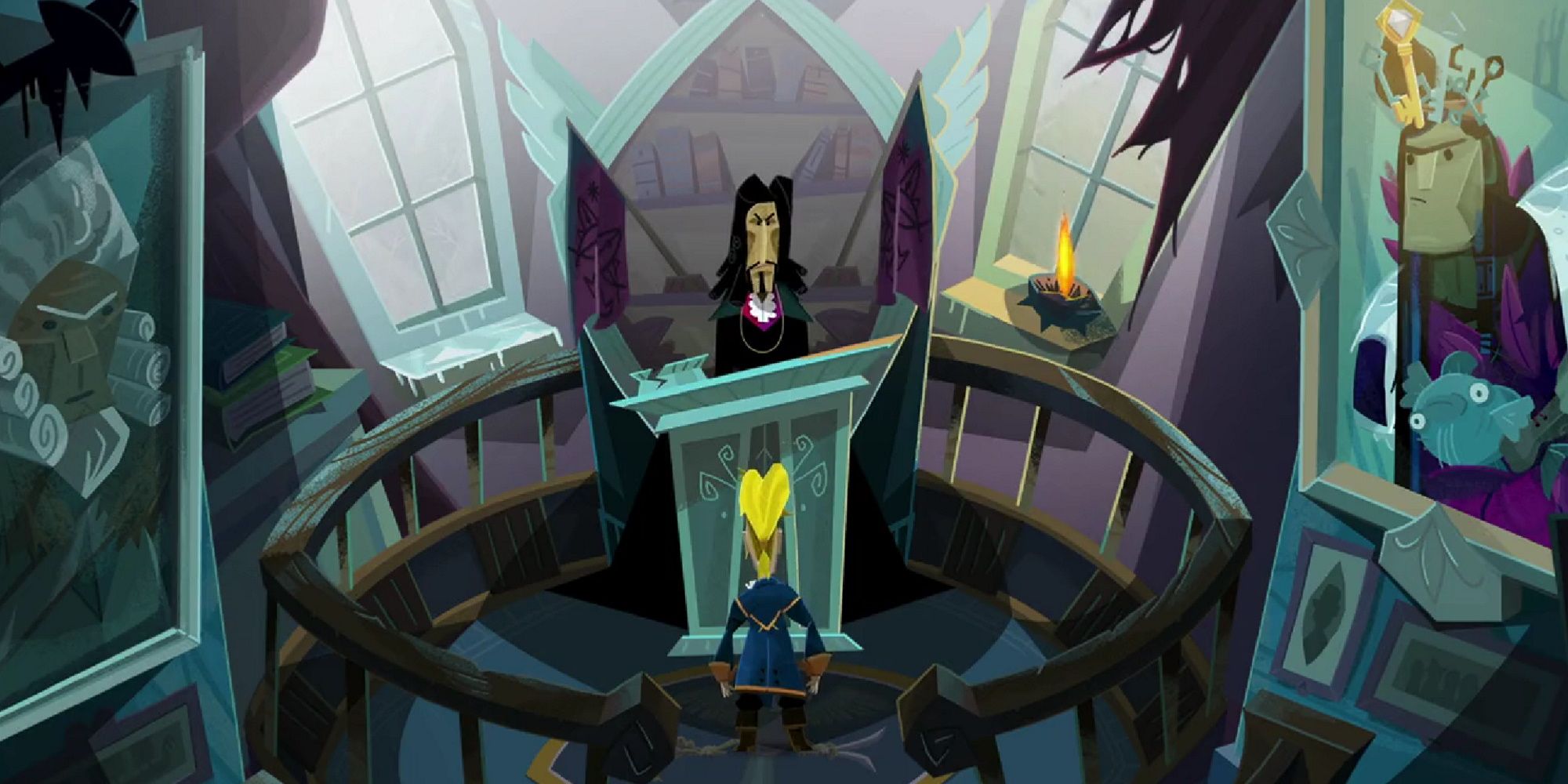 The silver lining to all this – if you’re willing to look on the bright side of internet trolling and targeted harassment – is that people care very deeply about Monkey Island. Gilbert says there’s something comforting about going back to the world of Monkey Island, and he knows that fans feel it too. “The game means a lot to a lot of people,” he says. “It was the game they grew up on, it was the first game they played as a kid. It was the game they shared with their siblings or shared with their father. You can’t really just ignore that people are so passionate over it that they argue with us about the font that we chose. On some level, you do have to respect that.”

That love and passion for the series may sound like it puts a lot of pressure on Gilbert and Grossman to get it right, but Gilbert says that isn’t the case at all. “I think that Dave and I do what we want to do,” he says. “We’re doing the game that is authentic to us and that we believe in. There’s horrible noise out there, but it doesn’t make us feel like we made the wrong decisions. We made the right decisions on this.”