Romancing SaGa: Minstrel Song has a pretty robust magic system that allows all characters to become mages to a certain extent – some will always be better than others, after all. The closer you look at the collection of magic spells available to you, the more complicated things get.

In addition to making sure your spell school skill levels are up to date, you can dabble in Spell Synthesis to create new spells or upgrade old spells in exactly the ways you want. The possibilities are truly endless.

The Basics Of Magic 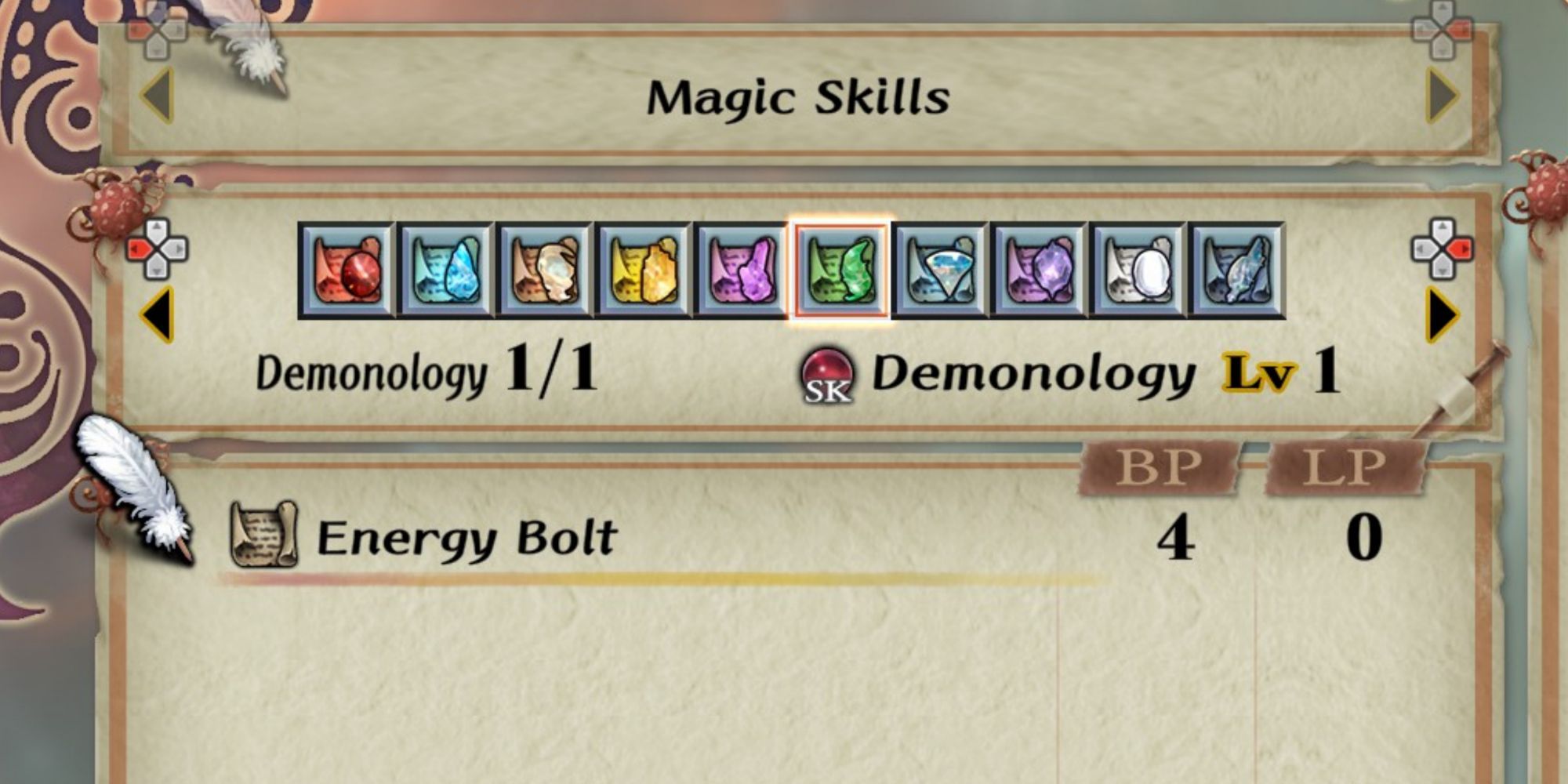 Unlike other skills in this game, spells must be purchased – they are purchased individually for each character, and there are ten schools of magic that each character can gain levels in – though only eight are accessible to all but one character.

You don't have to be in a class that is proficient with a school to use spells from that school.

The ten schools of magic are split into five pairs of two. A character cannot have both halves of a pair 'active' at any one time – switching the active school in a pair requires either purchasing a new spell of the desired school or paying a very small fee to switch at a merchant who sells spells of the target school. Refer to this table for more details.

The two schools that normal characters cannot access are Sorcery and Necromancy. These are only used by a temporary character and will not be covered in this guide.

Your skill with a spell's school and your class's proficiencies will affect how much BP that spell costs in battle. Spells also have skill level requirements like regular skills, so learning very high-level spells too early will make them cost LP in addition to BP.

Characters who know no weapon skills, only spells, gain a bonus to their spells in the form of a cost reduction. They have to know a lot of spells before this bonus kicks in. 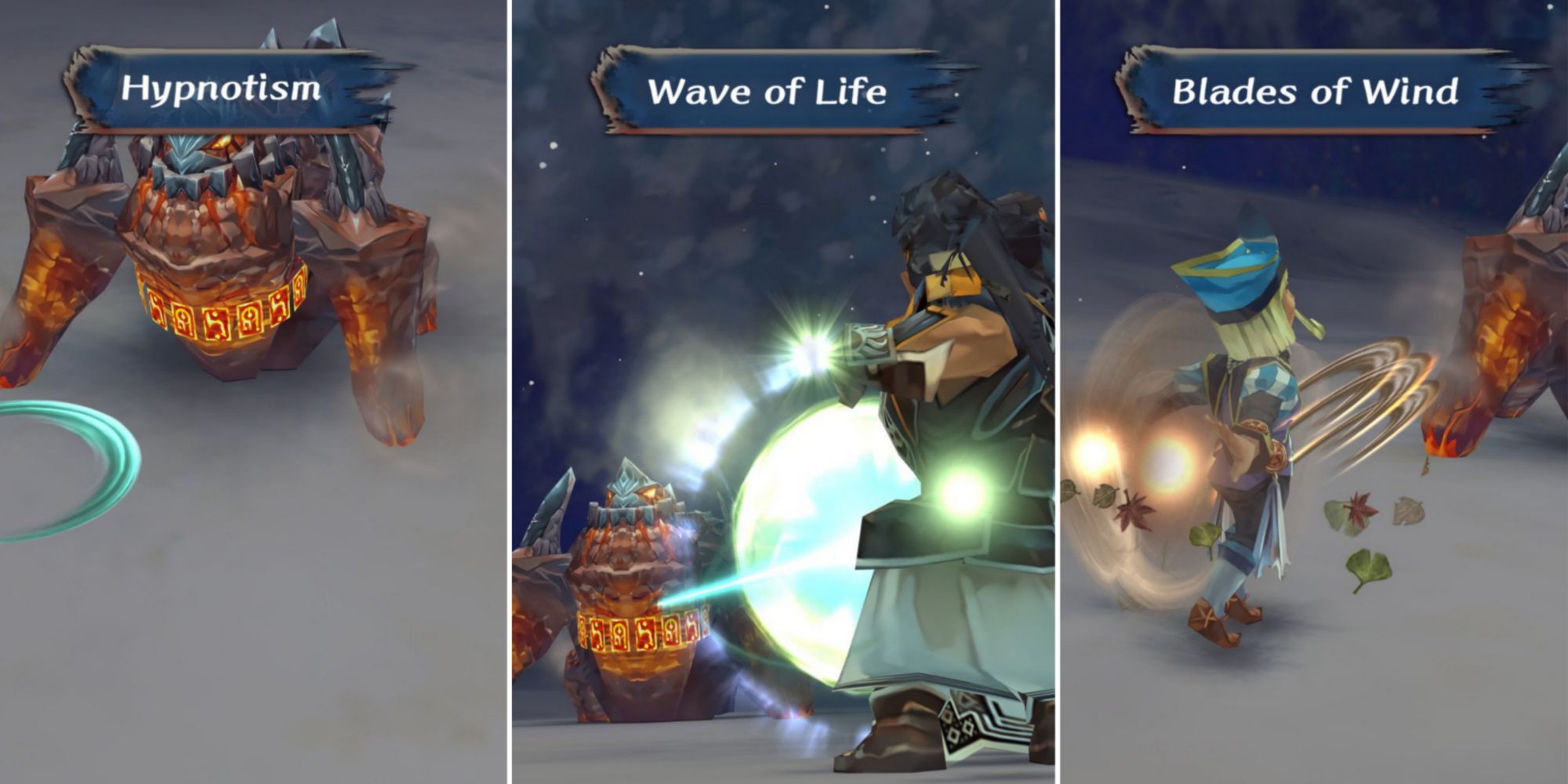 The tables below detail every spell from each school of magic, as well as how much they cost and where you can purchase them. They will not detail the unique synthesized spells, as they cannot be purchased.

Prices are a little bit higher in temples. 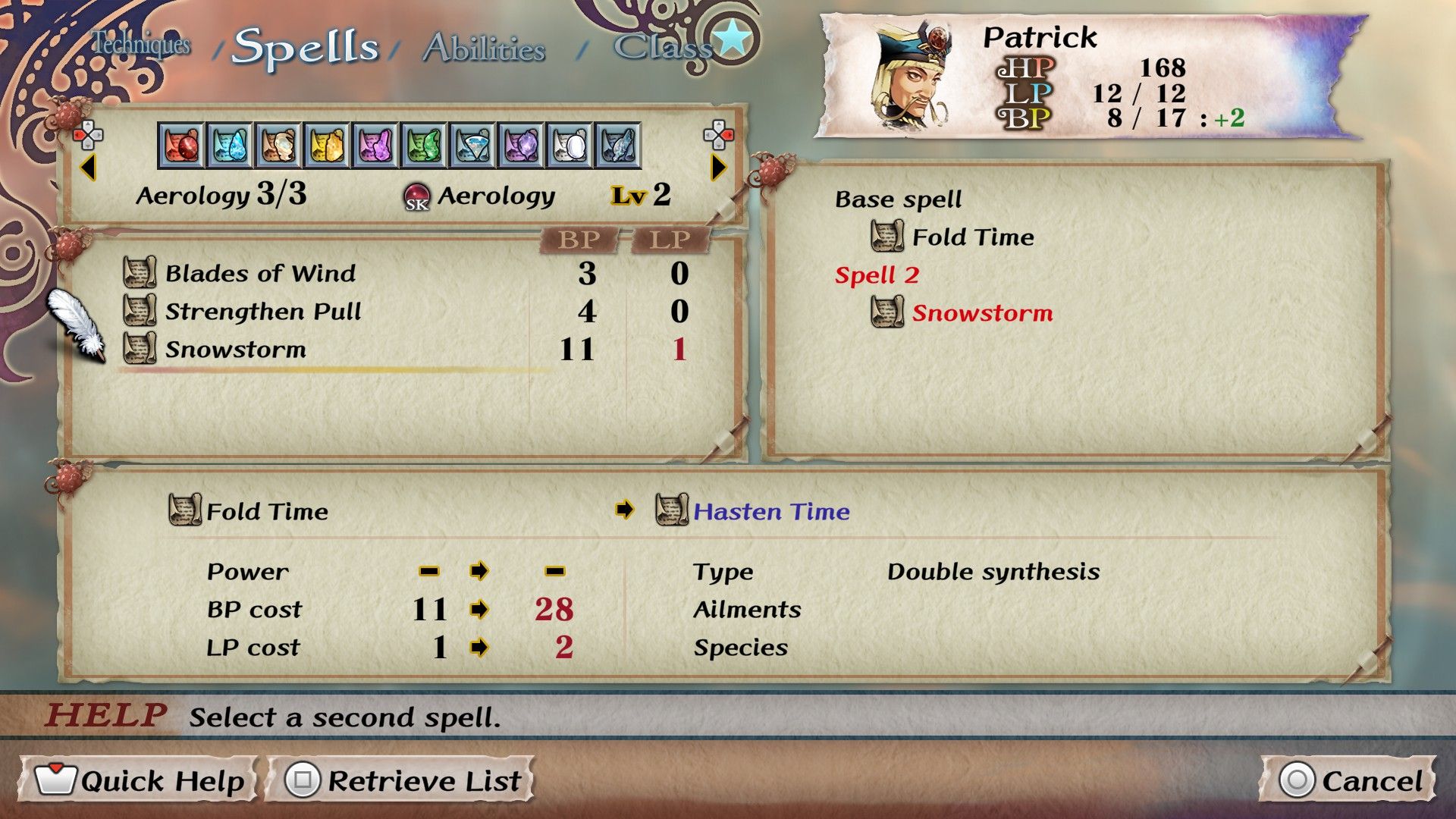 There are two specific classes that can access Spell Synthesis.

While Rosalian Mages have more flexible options when it comes to Spell Synthesis, they are only proficient (and thus get far lower BP costs) with Hydrology, Demonology, and Bewitchery spells. Imperial Scholars have four magic proficiencies, with Hydrology, Aerology, Illusions, and Cosmology. Both are viable.

When you start Spell Synthesis (which is accessed from that character's spell list in the Abilities menu) you must choose a base spell and then modifier spells. In most cases, this will simply modify the base spell, raising power, adding a secondary effect, or lowering BP cost. Certain combinations will make new spells entirely, however.

The table below details the spells that are only accessible through synthesis. All of them can be made with Triple Synthesis, but some of them are accessible with Double Synthesis, too.

The first spell in a combination is always the base spell.