One of Rogue Legacy 2's biggest changes from its predecessor is its item system. In the original roguelike metroidvania, you occasionally find shrines that give you a random item when encountered, but they're so rare that they don't feel crucial to your success.

Not only are items much more common in Rogue Legacy 2, but they also significantly change how you play the game. Now called Relics, these items can modify anything from how much damage you deal to how much gold you gain. But taking a Relic costs Resolve, a new stat that reduces your max health when it goes below 100 percent. Since you don't want enemies to immediately make mincemeat out of you, learning which Relics are worth taking is key to your survival. 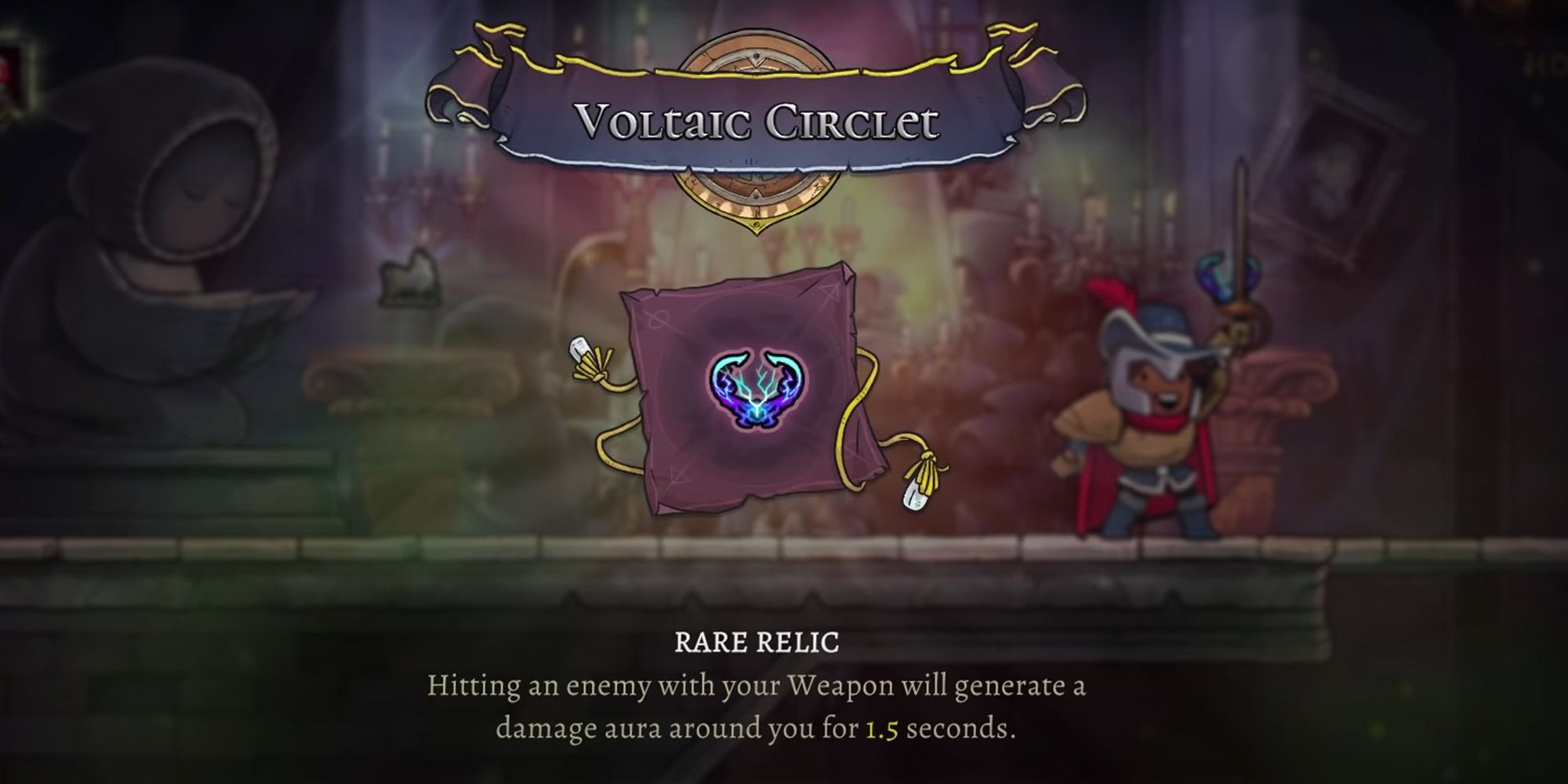 Turn yourself into an Electric-type Pokemon with the Voltaic Circlet! With this Relic, hitting an enemy with your weapon summons a ring of electricity around you for a few seconds. This Relic is especially helpful for classes that like to get close to enemies, like the Knight and the Barbarian, since enemies will usually be close enough to get hit by the electricity as well.

The ring also destroys Curse projectiles (which look like miniature skulls), so Voltaic Circlet also has a defensive benefit. Its somewhat high Resolve price may mean that it's not suited to every run, but it's definitely worth it if you have the Resolve to spare. 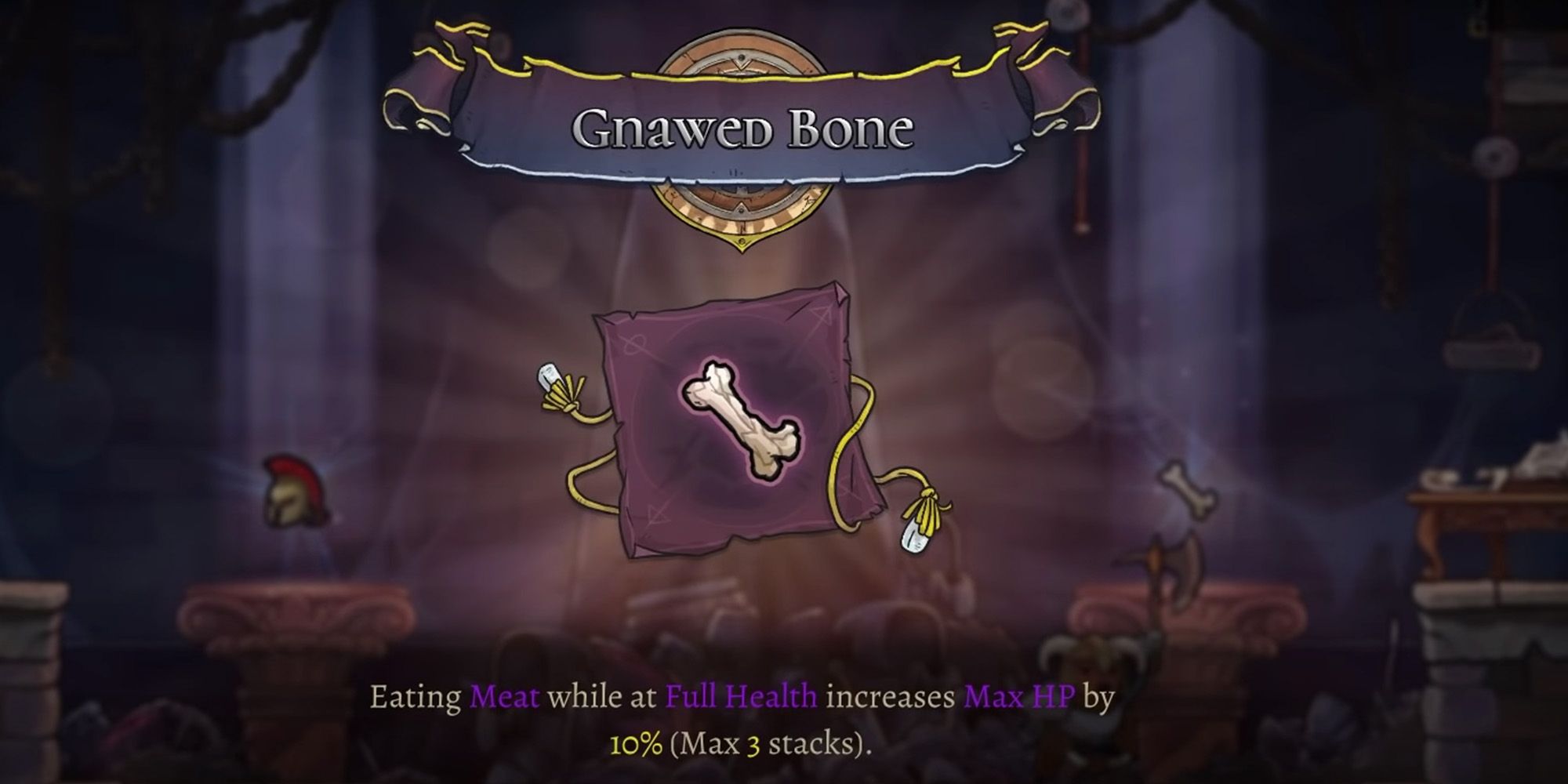 Gnawed Bone is a simple but effective Relic: when you're at max health and pick up a Health Drop, you increase your max health by 10 percent. This Relic is very good if you equip lifesteal Runes or if you have the Chef's Stew class skill, since those make you more likely to be at full health.

Gnawed Bone doesn't cost a lot of Resolve, but it can only increase your health three times, so sacrificing some max health to take this item may not always be worth it. 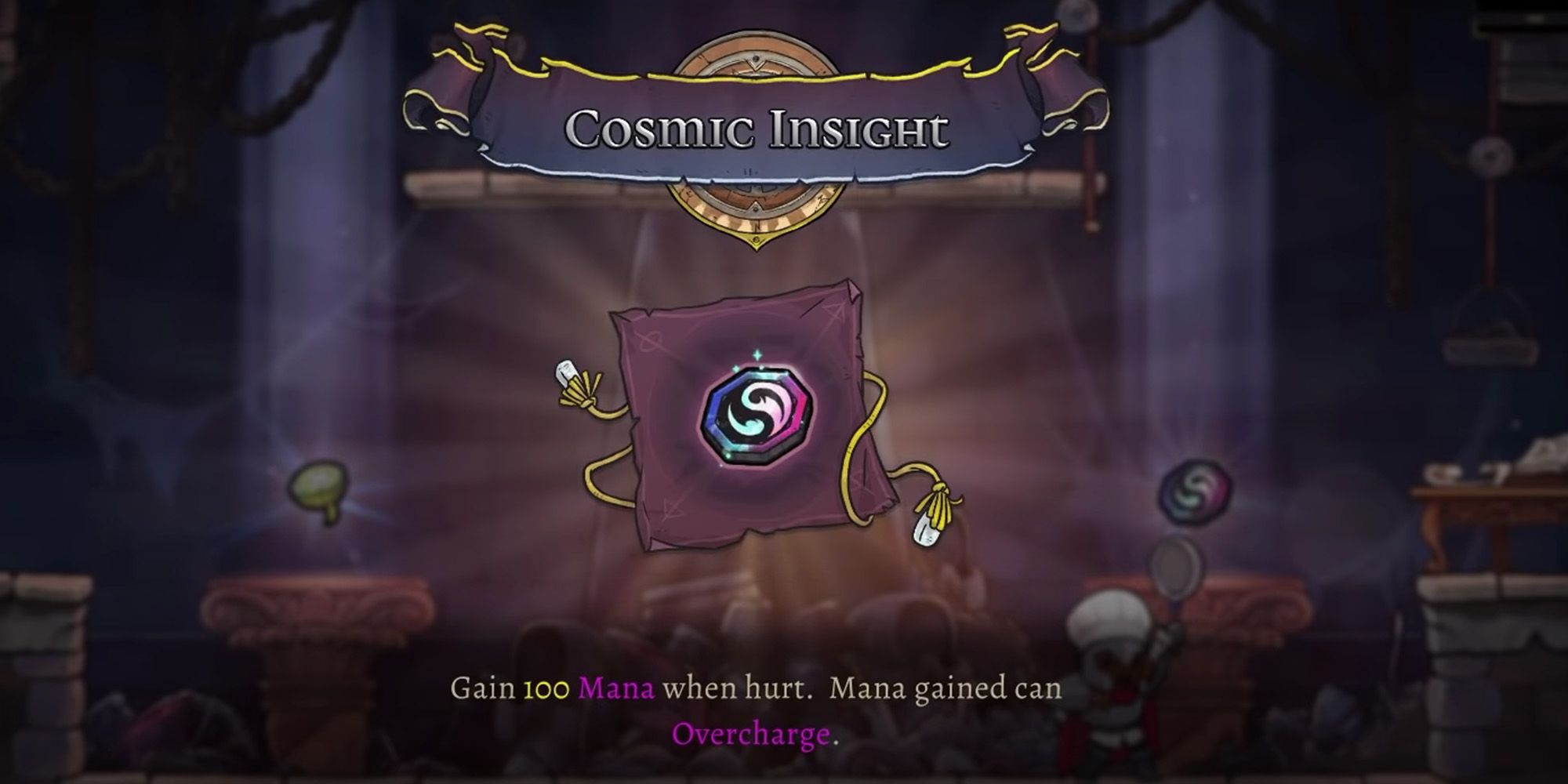 In Rogue Legacy 2, every class can now regenerate mana by hitting enemies, which makes spells a lot easier to use. Although some classes may have abysmally low mana, Cosmic Insight can give them a good injection of it. When you take damage while holding this Relic, you gain 100 mana – it can even go over your mana threshold.

This Relic gives you more opportunities to cast spells and it costs a low amount of Resolve, though the need to take damage to gain that additional mana keeps it from being overpowered. 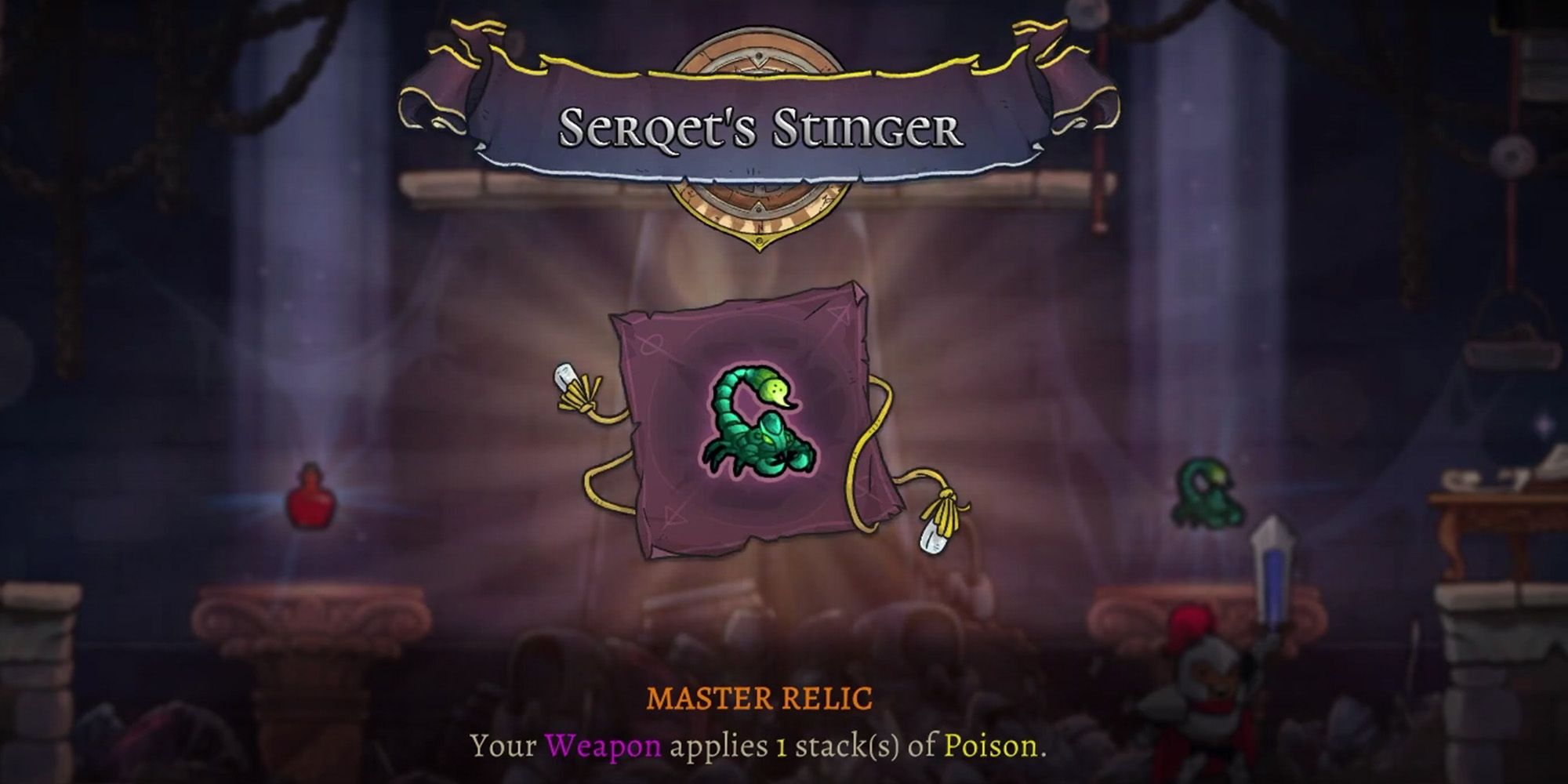 Named after the goddess Serket, who heals venomous stings in Egyptian mythology, the Relic Serquet's Stinger makes your weapon apply the Poison status effect to enemies. Poison can stack up to 10 times, making it deal more additional damage for each stack, and it deals critical damage if it stays on the enemy for over six seconds.

Though it has a very high Resolve cost, Serquet's Stinger should always be picked up while playing as a class with a multi-hit weapon, like the Gunslinger or the Boxer, since they can apply 10 Poison stacks in no time. It's time to stop stinging like a bee and start stinging like a scorpion. 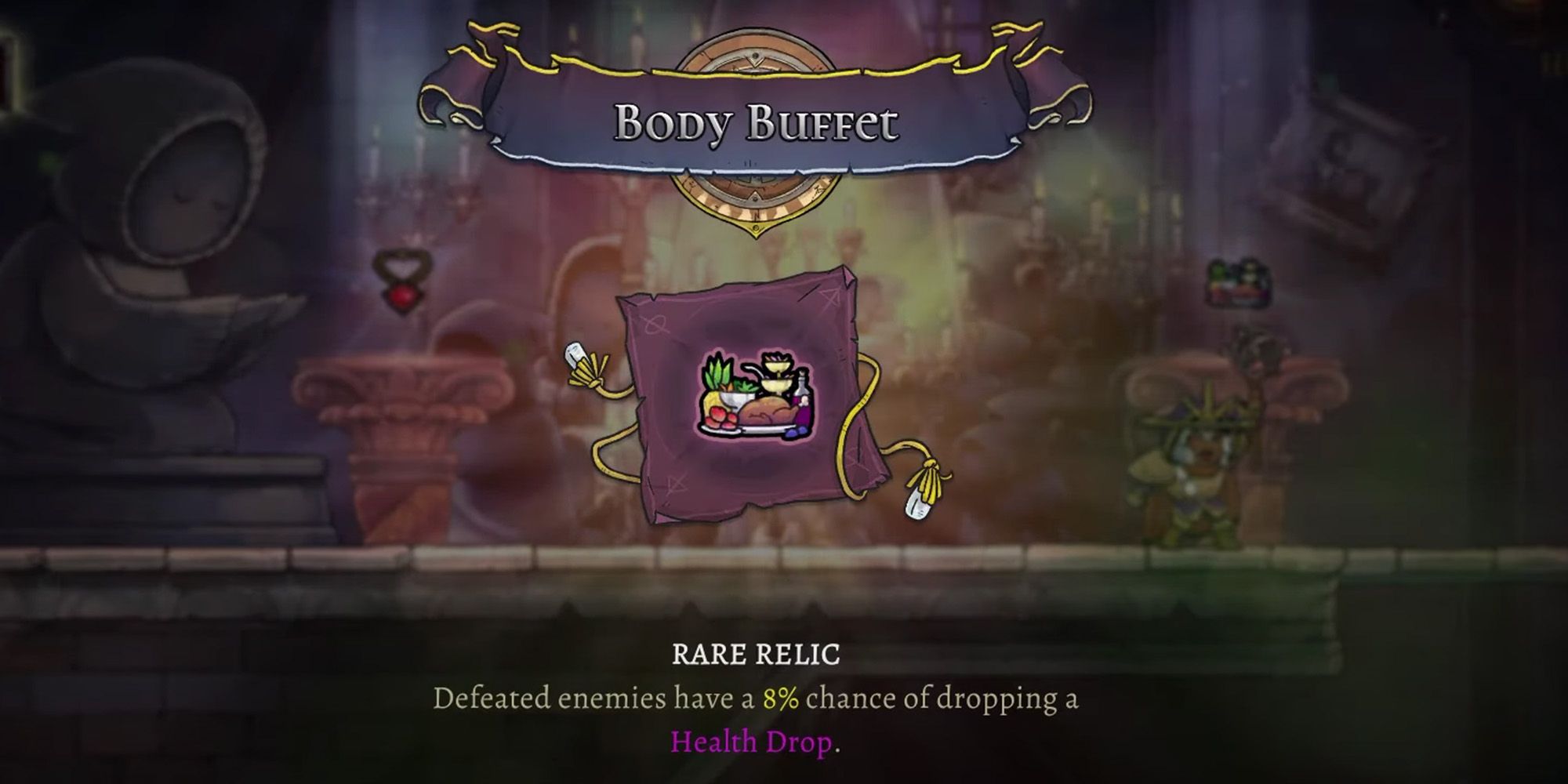 Health can be hard to come by in Rogue Legacy 2. Most of the health you get will come from Health Drops, but since you can only find them in breakable objects scattered around the castle, they aren't a great source of healing.

With Body Buffet every time you beat an enemy they have an eight percent chance to give a health drop. Since enemies are everywhere, and since you can always return to easier areas to fight more enemies, Body Buffet offers a reliable way to gain health. This Relic is already really strong, but if you manage to also find the Gnawed Bone, your heir can become nearly unbeatable! 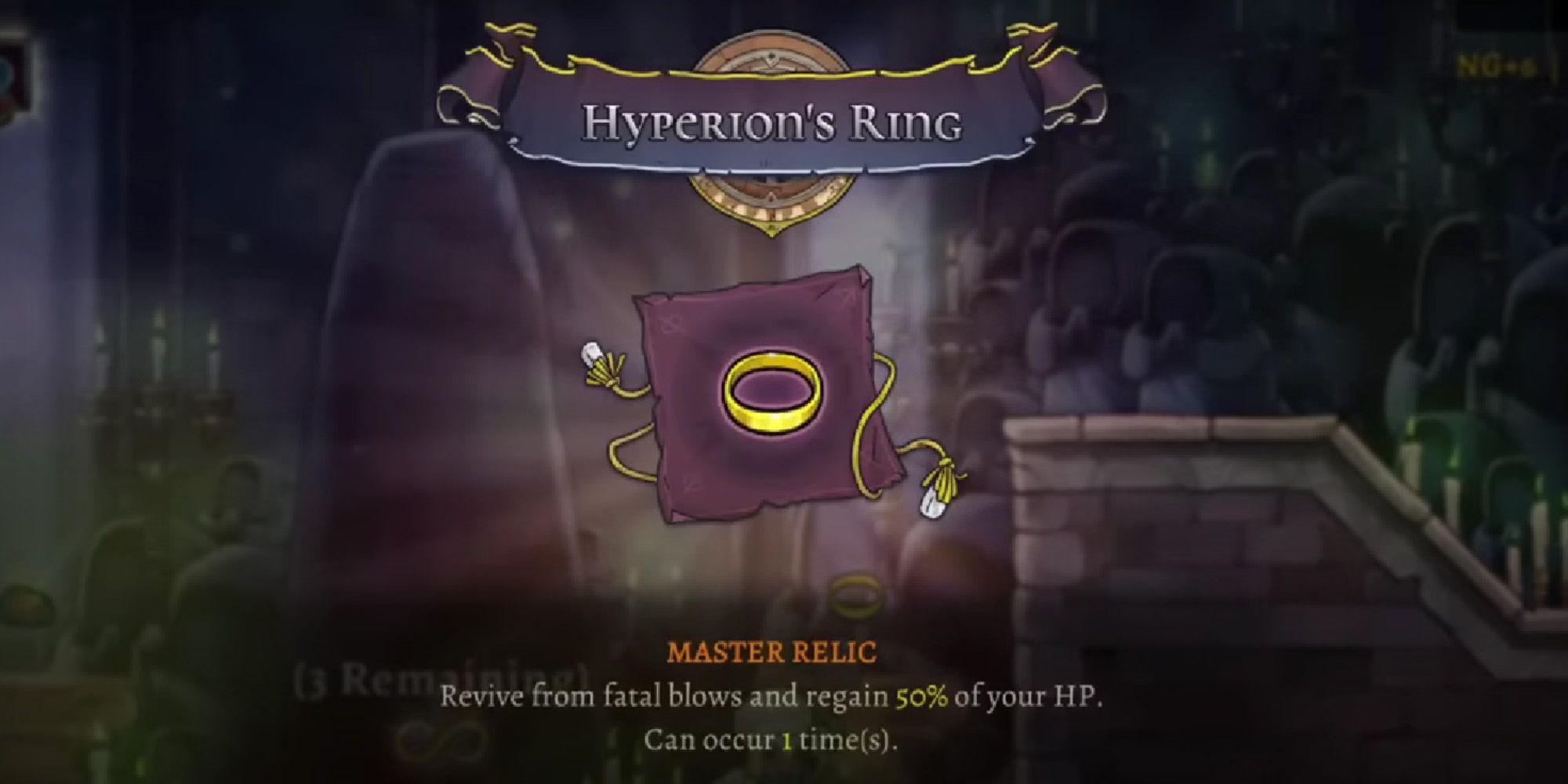 You will take a lot of damage in Rogue Legacy 2. It's nothing to be ashamed of, but it can suck when a promising and powerful heir's life is cut short because you took just a bit too much damage. Though Hyperion's Ring costs the most Resolve out of any Relic, it can be your saving grace in those moments, since revives you at 50 percent health the first time you would die.

This Relic has a great synergy with The Future Successor's Bargain: instead of dying and giving your heir 35 percent more gold, Hyperion's Ring will let you continue to play with the 35 percent gold bonus. Though this synergy is uncommon, it's worth keeping in mind. 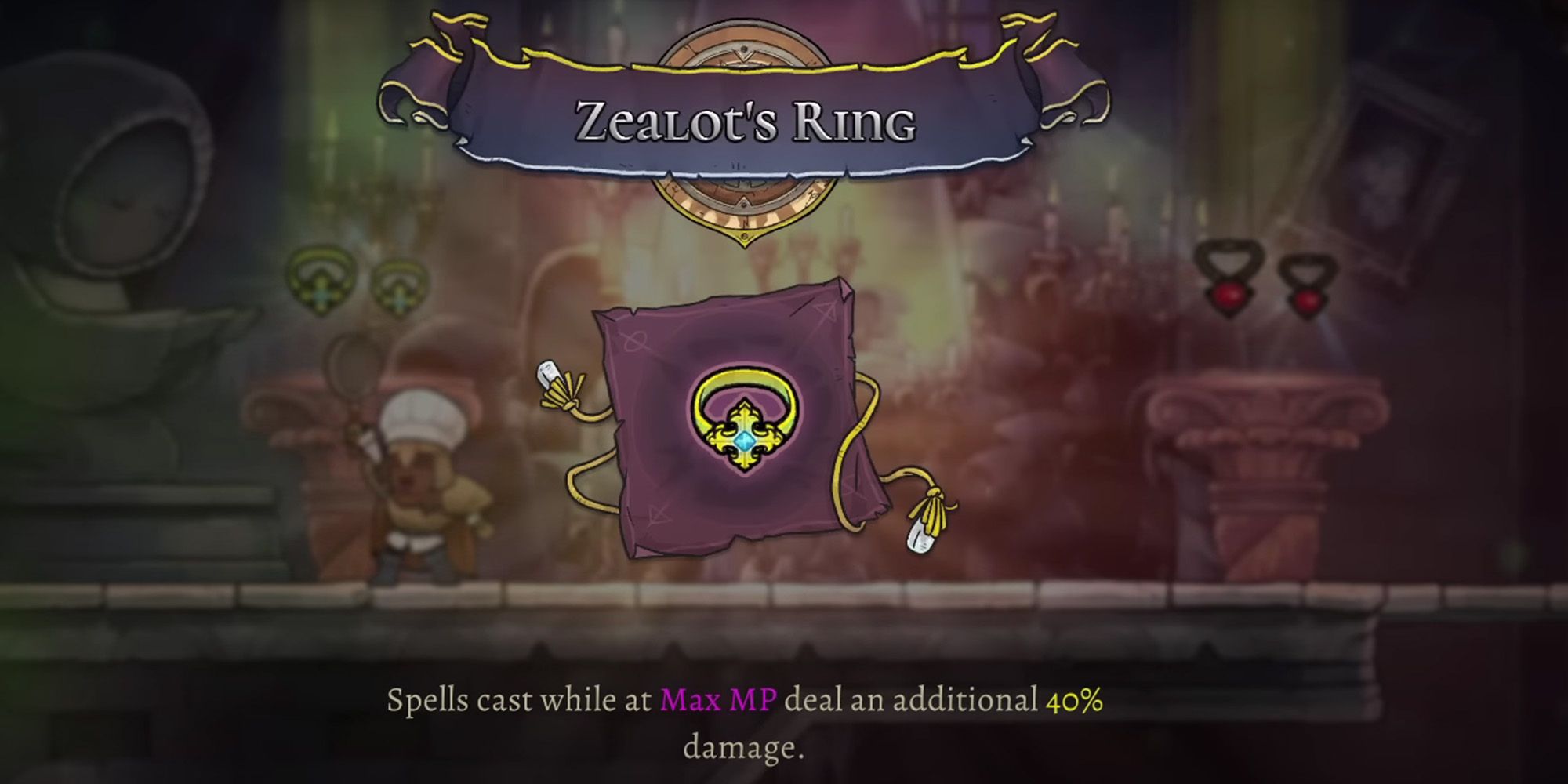 Zealot's Ring makes spells a lot more powerful. While holding this Relic, any spells you cast while at max mana deal 20% more damage. This can be incredible with the Mage and Astromancer classes since their improved mana regeneration lets them cast a lot more spells at max mana.

This Relic is best used with spells that cost a lot of mana and deal a lot of damage, like Gravity Beam and White Star. Because Zealot's Ring has a reasonable Resolve cost, it's almost always worth taking. 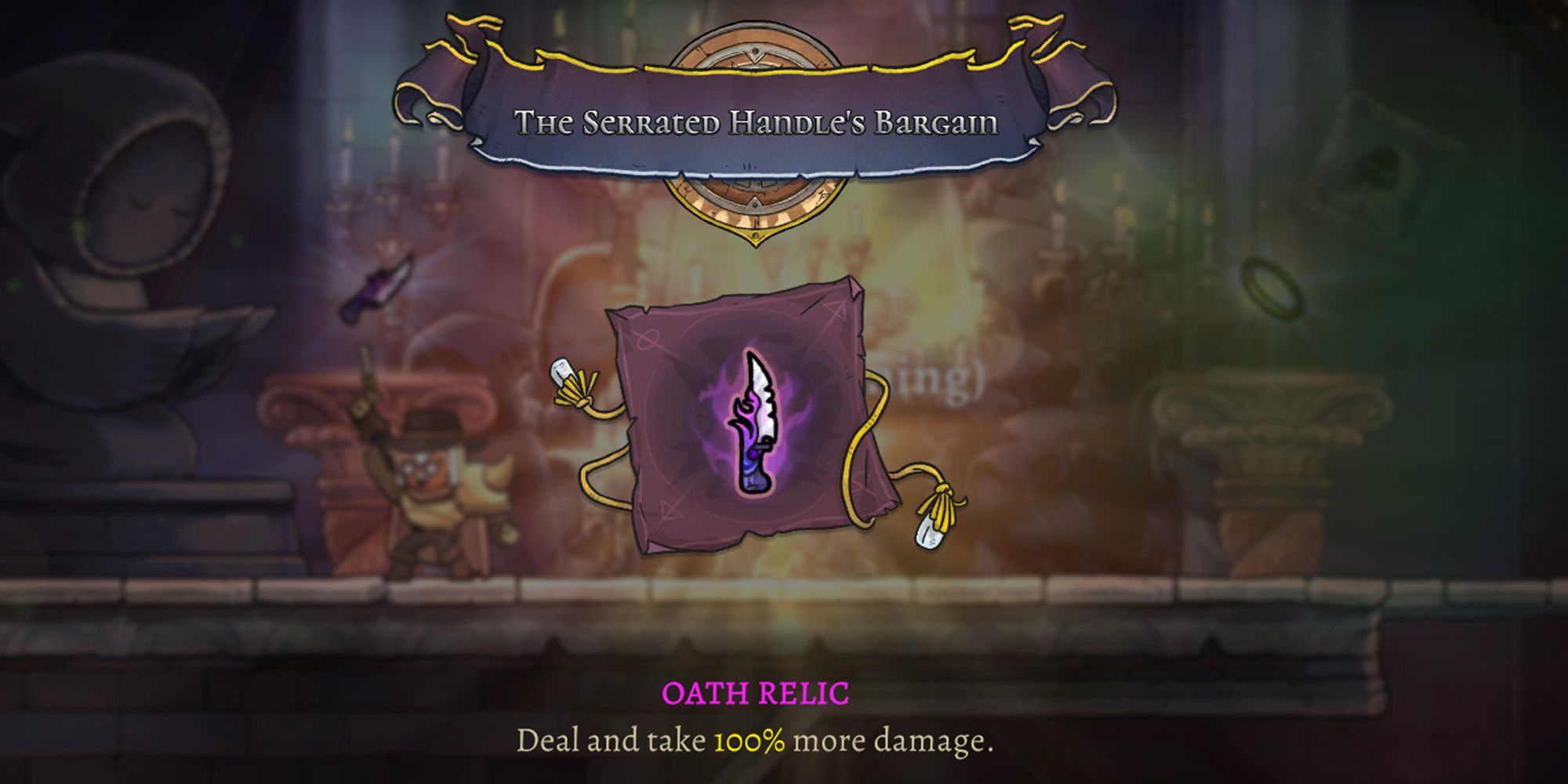 If you think the best defense is a good offense, The Serrated Handle's Bargain is for you. This Relic has a very low Resolve cost and doubles most of the damage you deal, including damage from weapons, spells, class skills, and spin kicks.

But The Serrated Handle's Bargain has a catch: for the rest of the run, you also take double damage from all sources. This Relic works best with classes that have good defensive options, like the Knight and the Valkyrie, or classes that can stay far away from enemies, like the Ranger or Gunslinger. It's extremely risky, but it also has a huge payoff if you play well enough. 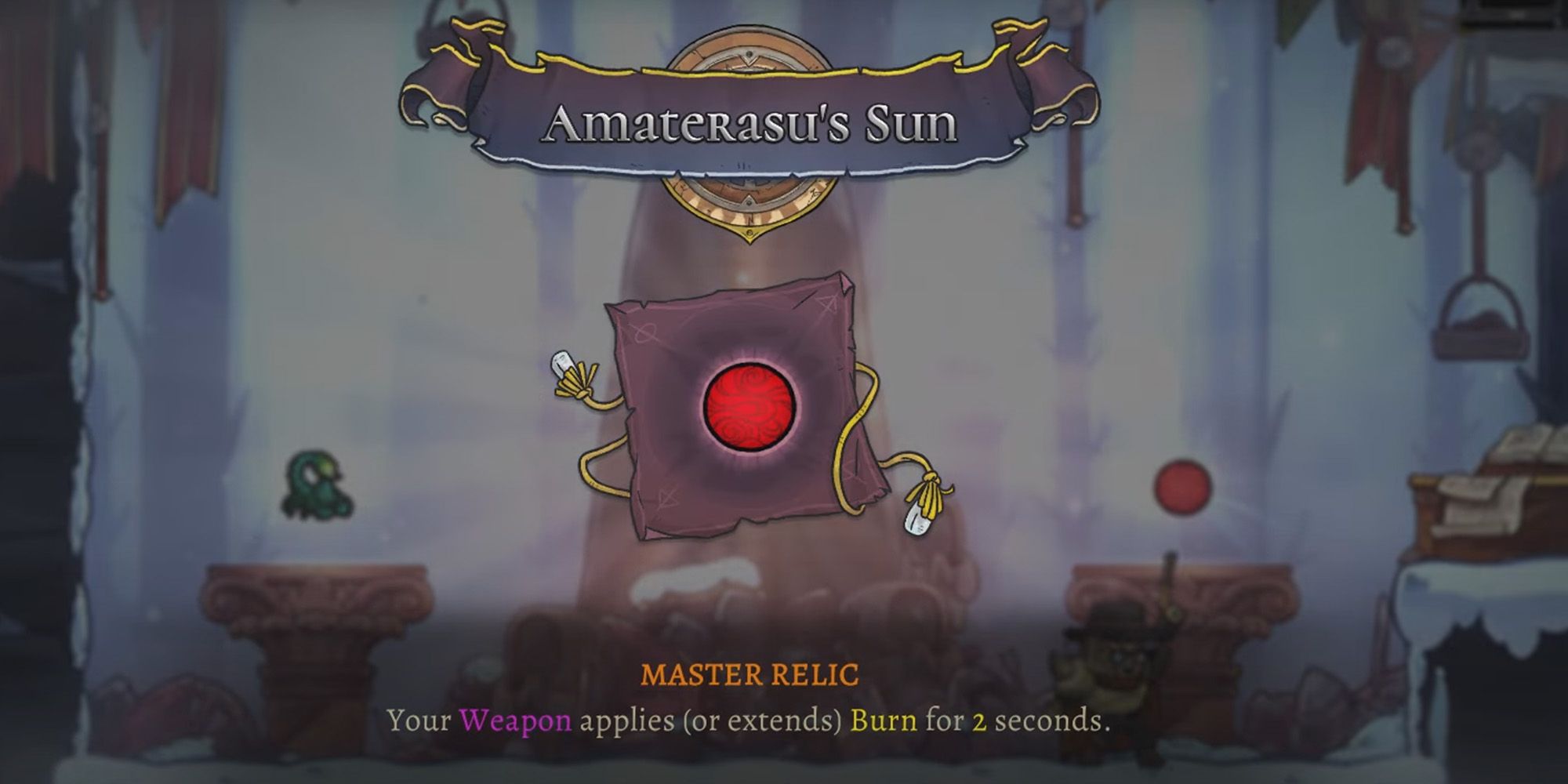 Amaterasu's Sun, whose name is based on the goddess of the sun in Japanese mythology, has one of the highest Resolve costs for a good reason. With this Relic, your weapon applies the Burn status effect to enemies, which deals additional damage to them for a few seconds. And when the status effect ends, it deals a few hits of critical damage to the enemy. This means classes with slow, single-hit weapons, like the Ronin or the Ranger, can get the most out of this Relic.

Applying Burn to an enemy that already has the effect doesn't do more Burn damage, but it does make you deal Burn damage for longer. This means Amaterasu's Sun item is still good with classes that attack faster, making it a versatile Relic. 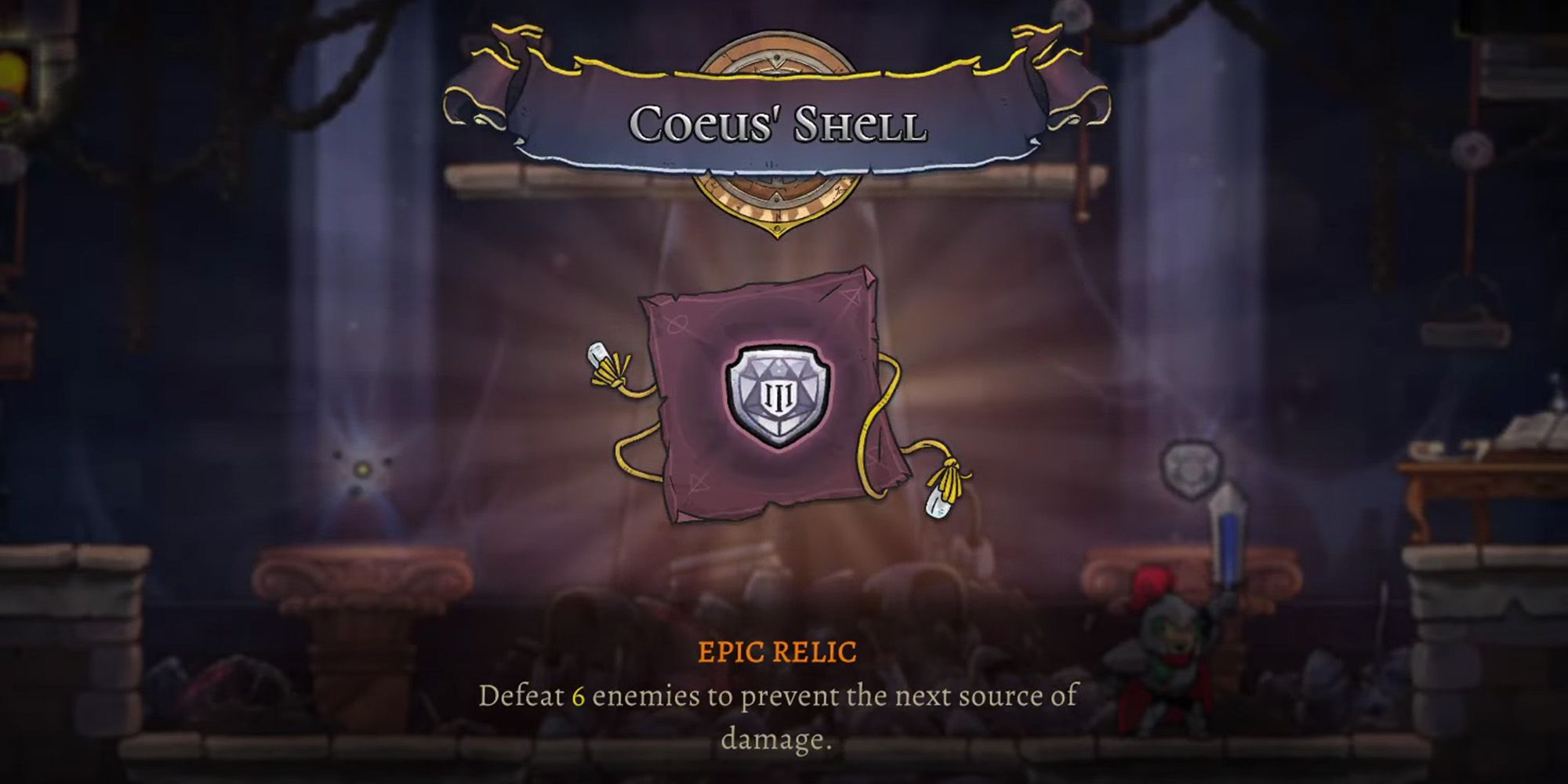 Coeus' Shell completely negates the next instance of damage you would take every time you kill six enemies. The protection doesn't stack, meaning you can only negate damage once during a boss fight, but the low recharge requirement means Coeus' Shell can consistently save your health in regular areas.

This Relic also lets you negate the damage you would take from the Blessing of Life, which can show up several times throughout the game and which increases your max health by a lot. This amazing use makes Coeus' Shell one of the best defensive Relics in the game.