Rogue Legacy 2's character system works in much the same way as the first game: every time you die, you choose an heir to inherit all your previous character's currency and upgrades. Choosing your heir in Rogue Legacy 2 depends on a few features that are all tied to their class, including their stats (health, mana, weapon damage, and spell damage), weapons, and special skills.

Rogue Legacy 2 introduces many new classes, and consequently, many different ways to traverse the castle. From the classic Knight to the new Gunslinger, the classes are all enjoyable and well-balanced in terms of combat capabilities. Although there are a few that can give you a slight advantage. 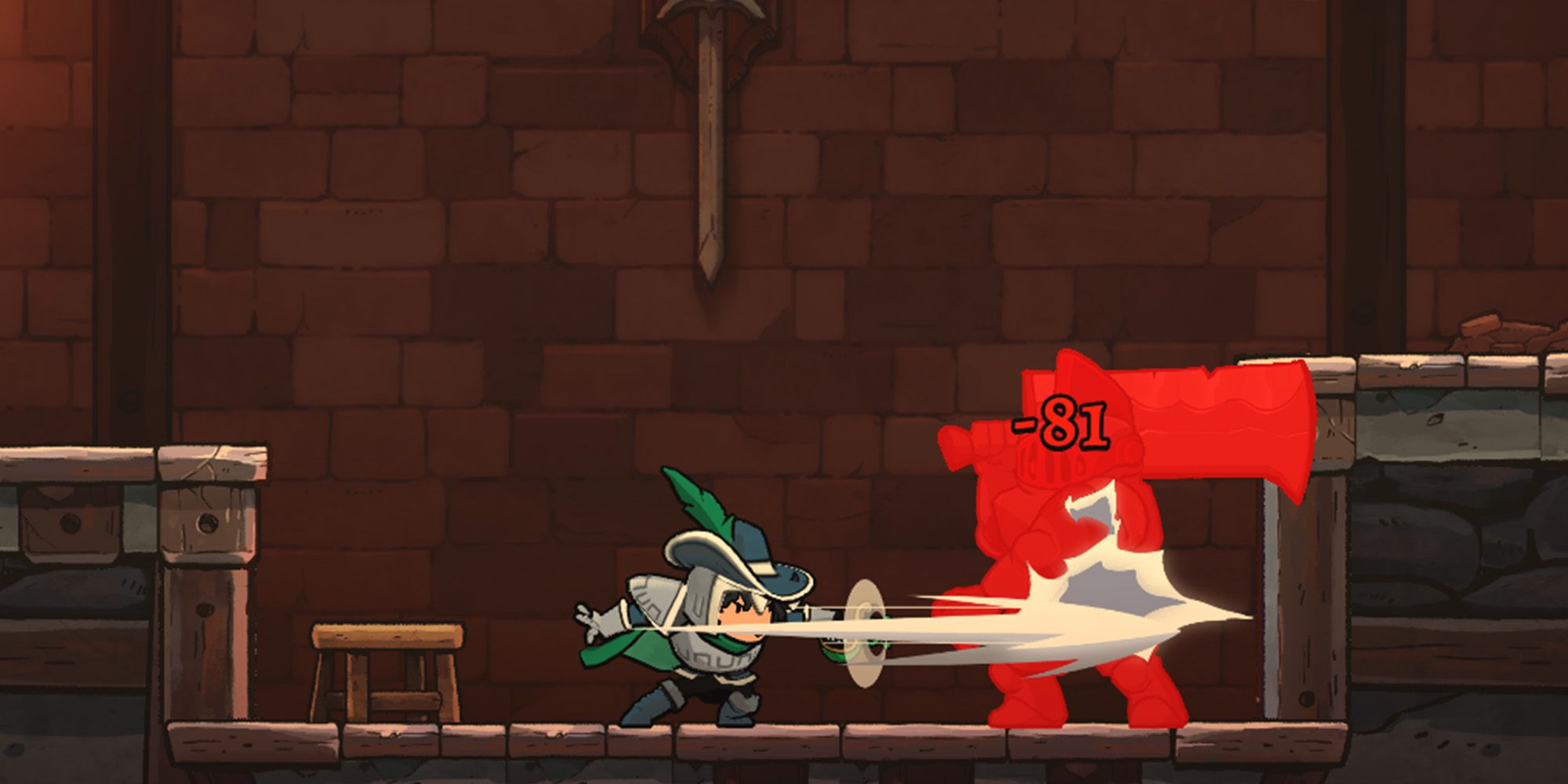 The Duelist is all about carefully timing a string of attacks. Rather than slashing in an arc around themselves, the Duelist strikes directly in front of themselves with a saber. Attacking when you're about to land will let you perform an additional grounded attack, meaning you can quickly perform a high damage two-hit combo.

Since you can cancel any attack into their class skill, Combat Roll, which can itself be canceled into an attack that is guaranteed to be a critical hit, you can even chain together three hits with enough practice. Combat Roll also makes you invulnerable, so don't be afraid to roll through an enemy in the middle of a combo!

9 Pirate: Melee And Ranged Combat At The Same Time 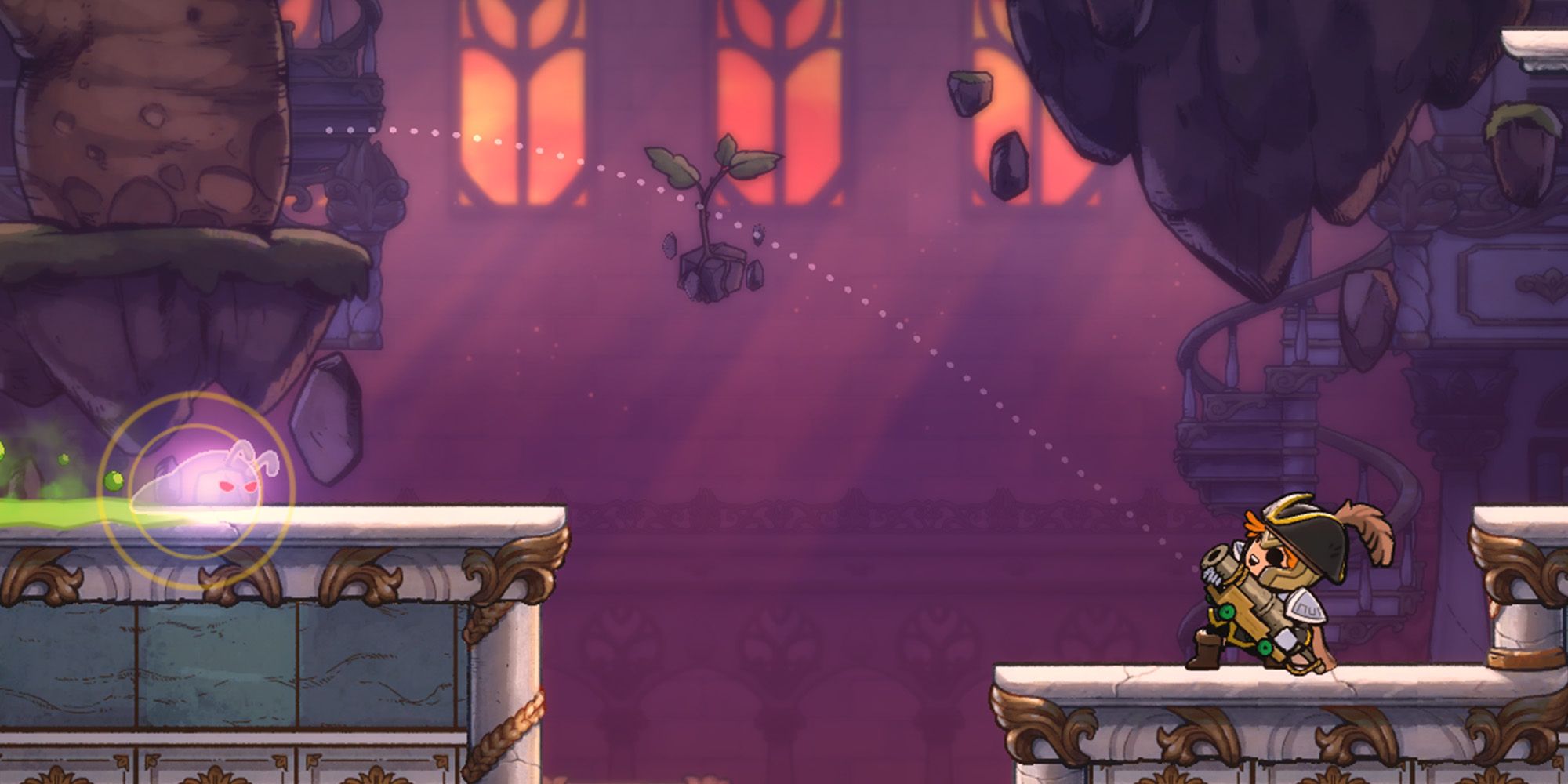 The Pirate offers a fascinating combination of melee and ranged combat. Attacking normally will make you swing a handheld cannon, which knocks enemies. It also sets up for your cannon ball shot, which can only be activated by holding the attack button after the swing ends. The swing has lower damage than the cannon ball, so relying on melee combat is inefficient, and the need to perform the swing first makes ranged combat inefficient.

You have to learn to use the attacks together, which is where their class skill, which summons a flying pirate ship, becomes useful. The ship's mobility can help you approach enemies for a swing, and its constant barrage of projectiles keeps other enemies away so you can safely follow up with a cannon ball shot. You can also abandon the ship to send it flying at enemies for high area-of-effect damage. 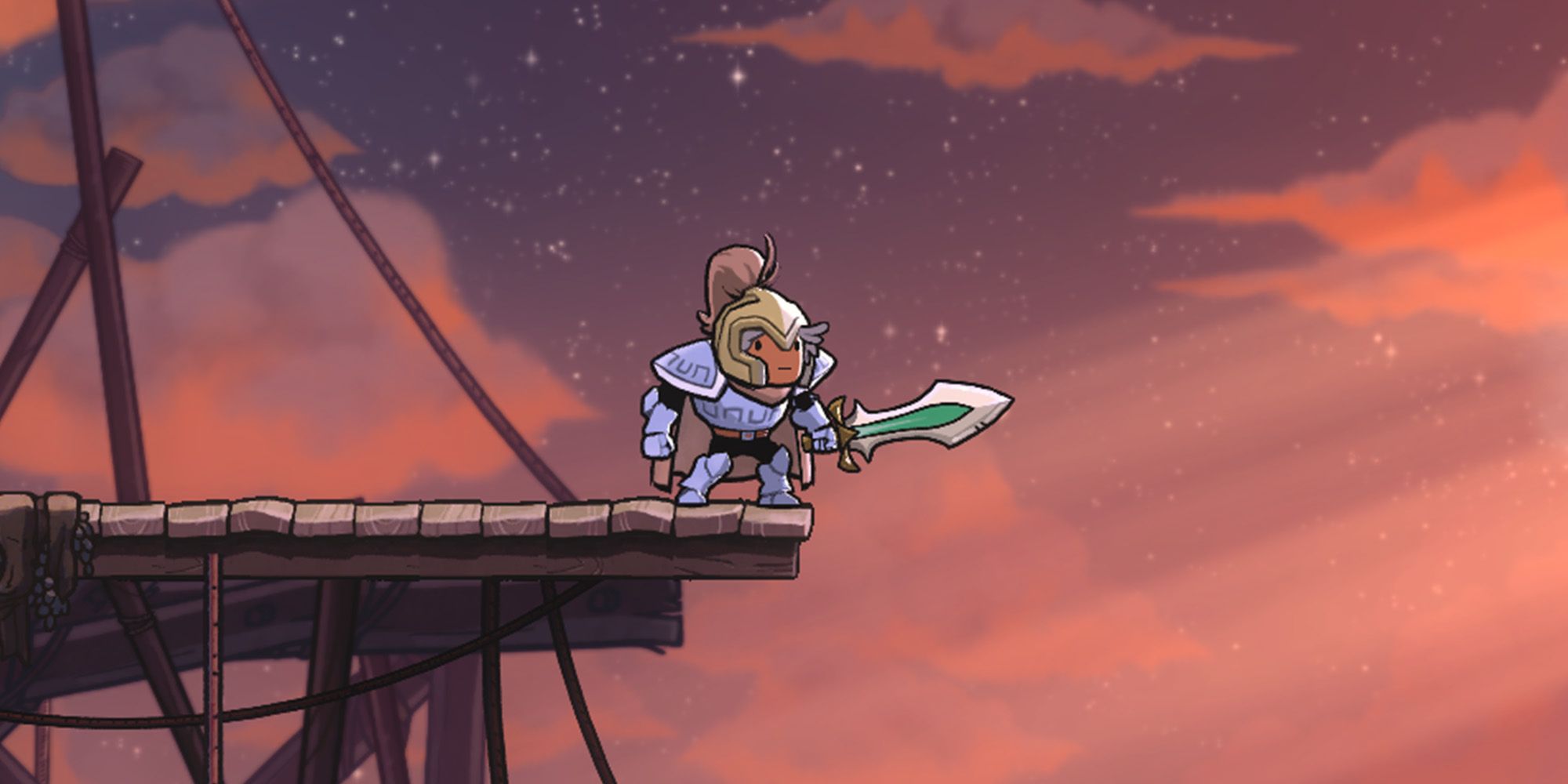 Equipped with the classic sword, the Knight is the same well-balanced fighter from the first game. Their health and mana are good, their weapon damage is above average, and they still have their trusty shield as their class skill. In Rogue Legacy 2, the shield has to be used a moment before you would get hit to prevent all incoming damage. Poor timing will only prevent half the damage you receive, and the shield has a ten-second cooldown, so you have to practice to use it well.

The Knight's good defensive and offensive abilities make them a fun, simple, and powerful class. Not to mention their alternate weapon is a pizza.

7 Mage: Spell-Slinging Is Now Much Easier 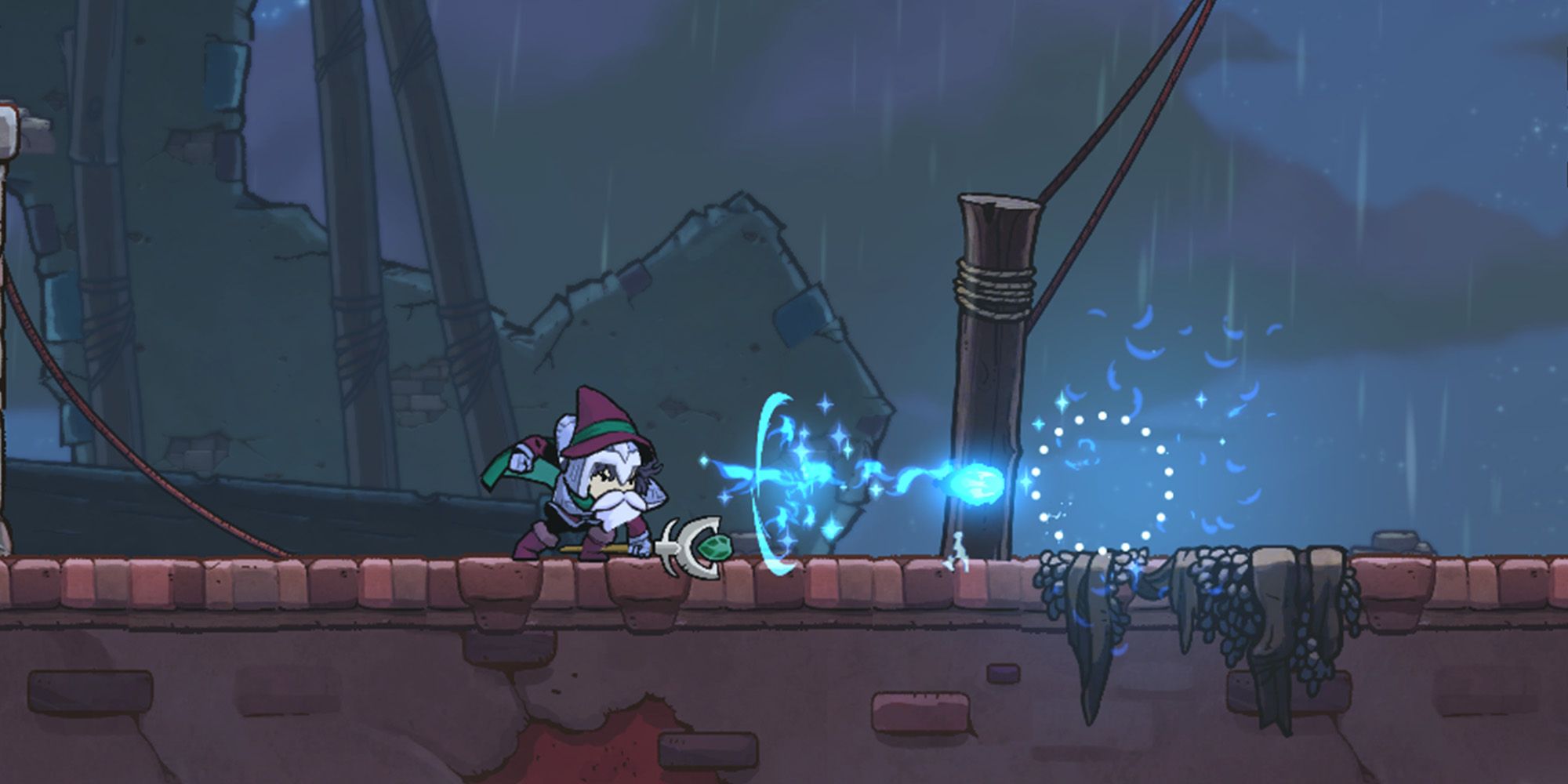 The Mage finally discovered that casting spells with a staff is much easier than with a sword. For their regular attack, the Mage shoots a small fireball that passes through walls and explodes at a fixed distance. Rogue Legacy 2 made it so that all classes can gain mana by hitting enemies, based on the original Rogue Legacy's Spellthief class, but the Mage's attacks drain a much greater amount of mana from enemies so you can cast even more spells.

Alongside their high spell damage and additional spell in the place of their class skill, the Mage is a much safer class to use than in the previous game. 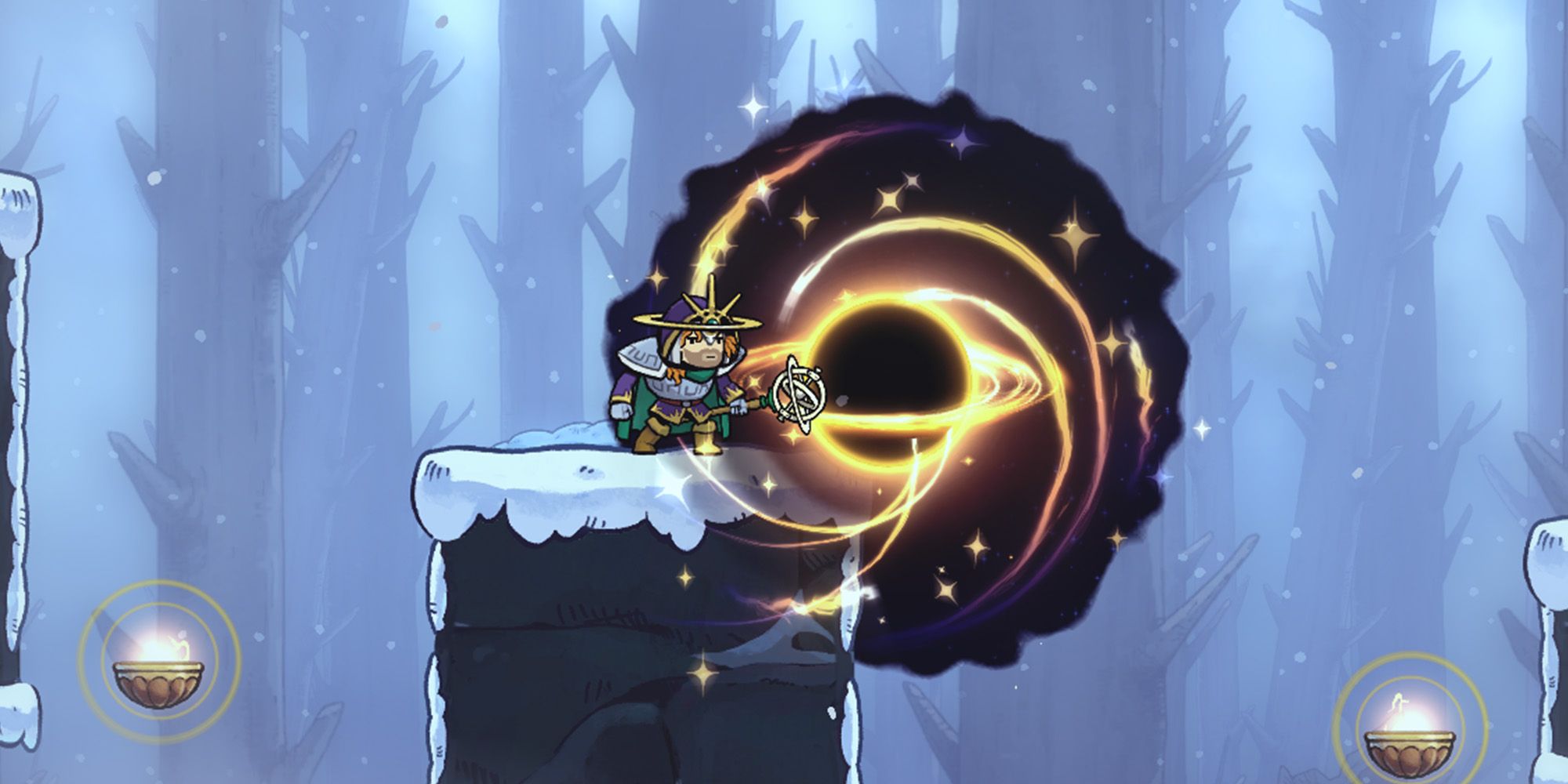 The Astromancer is one of the game's most fun classes. Their normal attack lets you summon a long-lasting black hole right in front of you, dealing continuous damage to all enemies in its range. You can only ever have one black hole (summoning a second one removes the first one), so you have to use them carefully. Luckily, the Astromancer's class skill, Comet Form, can help you find the right spot for your black hole by making you temporarily invulnerable, faster, and able to fly.

Comet Form is also a good offensive option because it deals damage to enemies you touch and has a quick cooldown. And since the Astromancer regenerates mana from all damage they deal (including Comet Form, status effect damage, and spells), you always have at least one way to kill enemies. 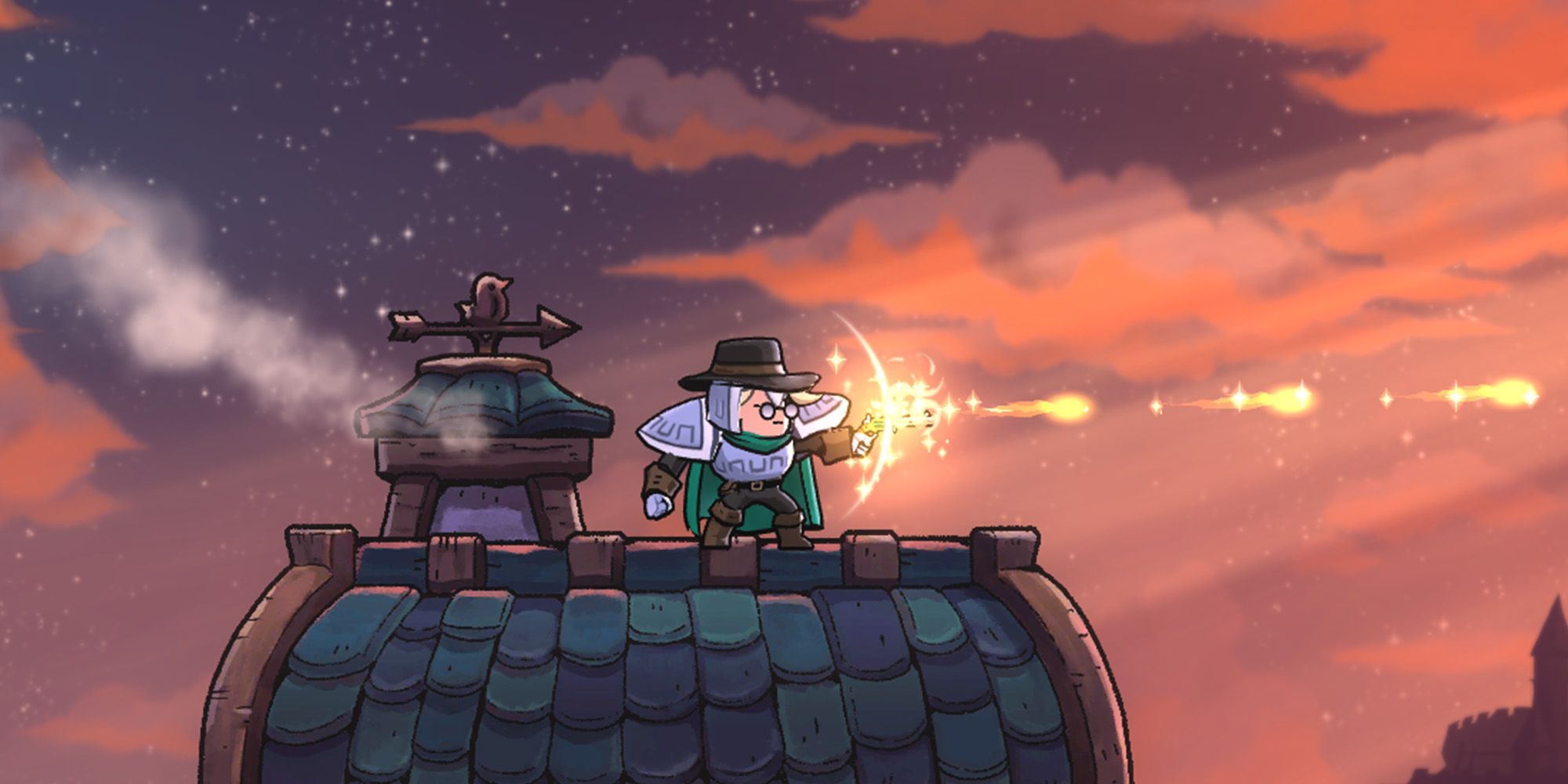 The Gunslinger has the visual and mechanical appeal of gaming's best cowboys. By holding down the attack button, the Gunslinger will rapidly unload all 20 bullets in their revolver, dealing a surprising amount of damage. If you attack in the air you will freeze in place until you stop shooting, which makes aiming easy.

The Gunslinger's class skill, Makeshift Explosive, is simple but effective. You perform a small leap and throw a stick of dynamite under yourself, detonating in a cross-shape that deals low damage. The skill's two charges and quick cooldown make it both a good offensive area-of-effect tool and a good additional movement option. 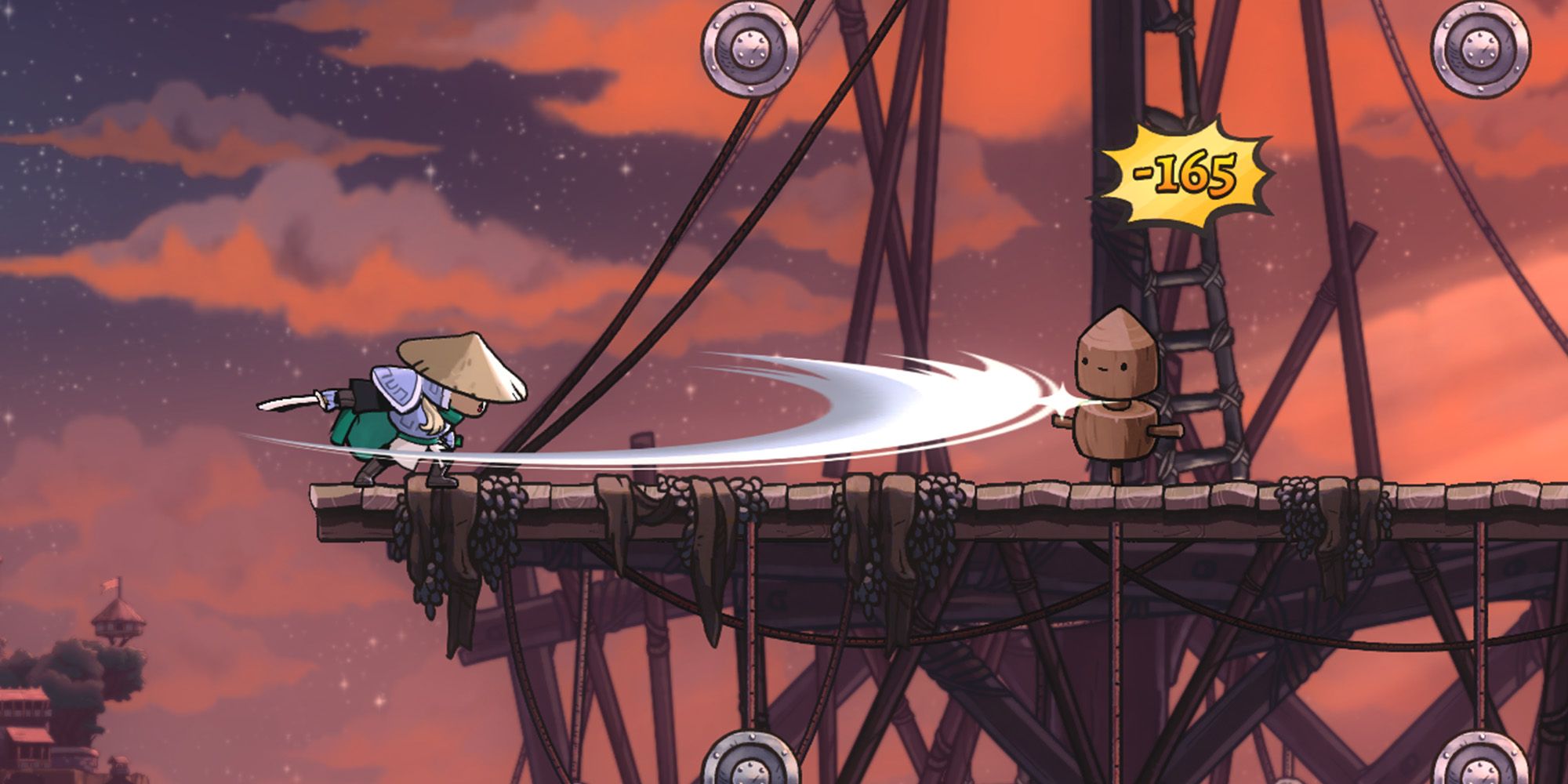 The Ronin, a spiritual successor to the original game's Shinobi class, has ditched their sword in favor of a katana. This weapon has the longest attack range of any weapon in the game, but the tip of the blade does high critical damage, so you're going to want to learn proper spacing to maximize your damage.

This samurai warrior can also use their class skill, Immortal Kotetsu, to teleport and slash through all enemies in their path. Killing an enemy with Immortal Kotetsu immediately recharges it, which lets you chain together many slashes if used properly. The katana's long reach and the teleport ability make Ronin an amazing high-damage and high-mobility class.

3 Valkyrie: The Spear Is More For Defense 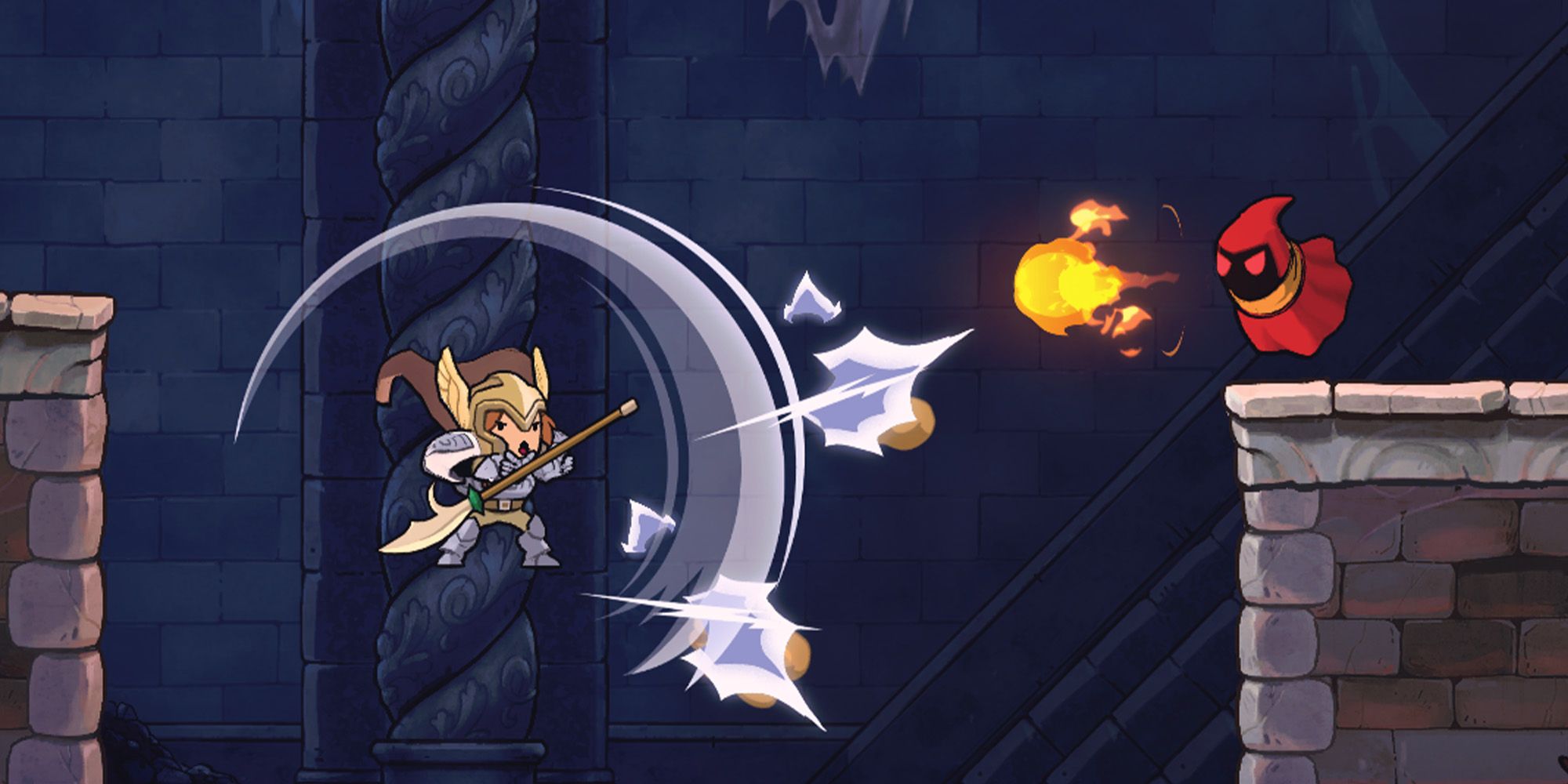 The Valkyrie is one of the most well-rounded and versatile classes in the game. They have strong stats all around and are able to keep enemies at a distance with their long-range spear. You can use the spear to attack in cardinal directions, which may feel familiar to fans of the hit metroidvania Hollow Knight.

Using their class skill, Deflect, you can also spin the Valkyrie's spear to block any nearby projectiles. You normally need to hit five enemies to recharge Deflect, but if you block at least one projectile, it will recharge immediately. The skill will also give you mana for each projectile you blocked, letting you cast spells more often. This combination of abilities makes the Valkyrie invaluable in later areas and in boss battles. 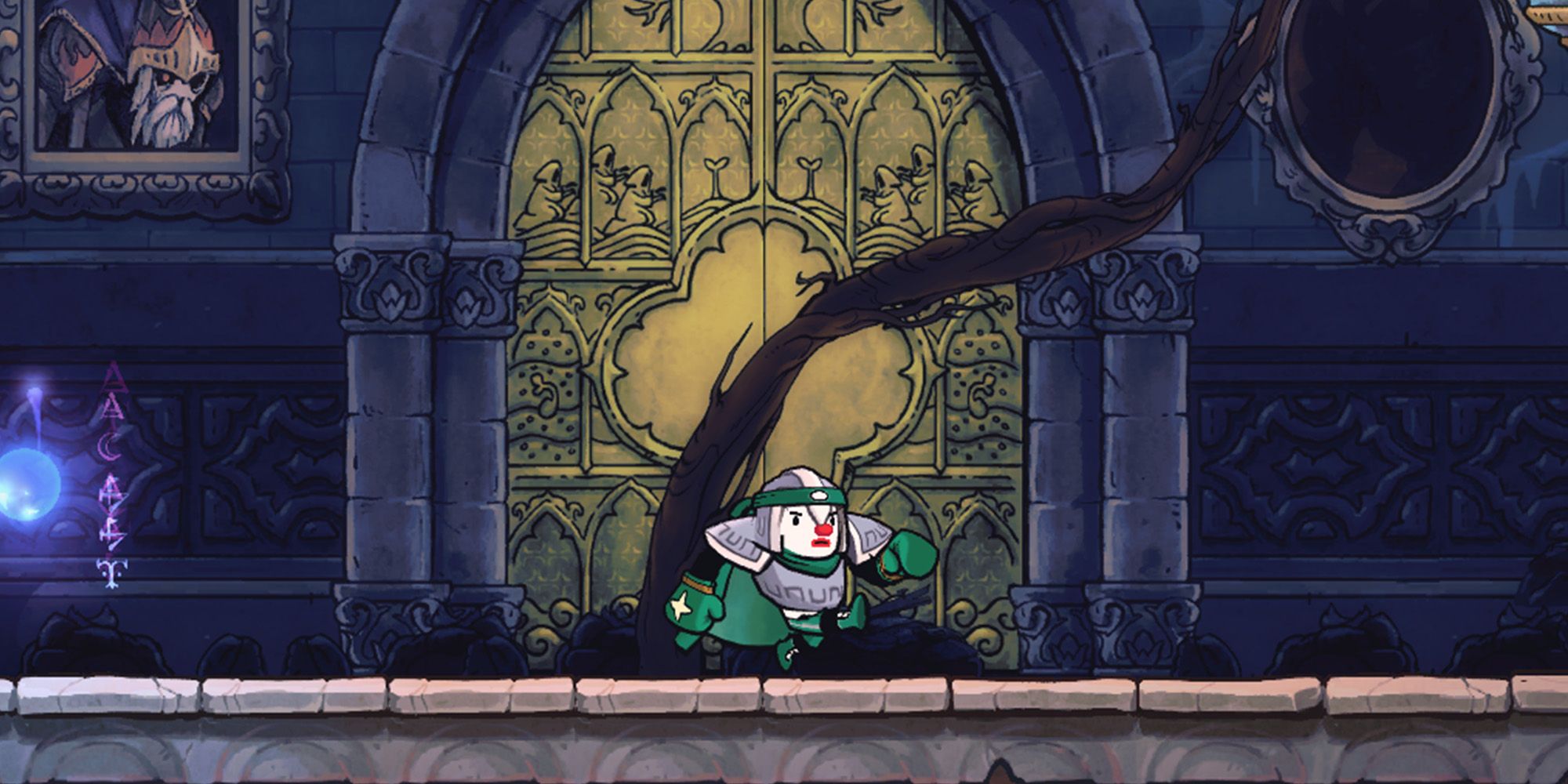 The Boxer harnesses the power of gloved fists to do away with enemies. Their main attack is a rapid flurry of punches that deal high damage and no knockback, which makes it easy to get lots of consecutive hits. This is especially important for Boxer because each punch will give you Combo, a status effect that can stack up to 30 times and that temporarily increases the damage of your attacks.

If that wasn't strong enough, Boxer's skill Knockout Punch lets you knock enemies into walls and into other enemies for massive damage. The skill consumes your Combo and deals additional damage based on how much Combo you had, but you will rarely need to stack up 30 for the full effect. Even just five Combo can make Knockout Punch instantly kill most enemies. 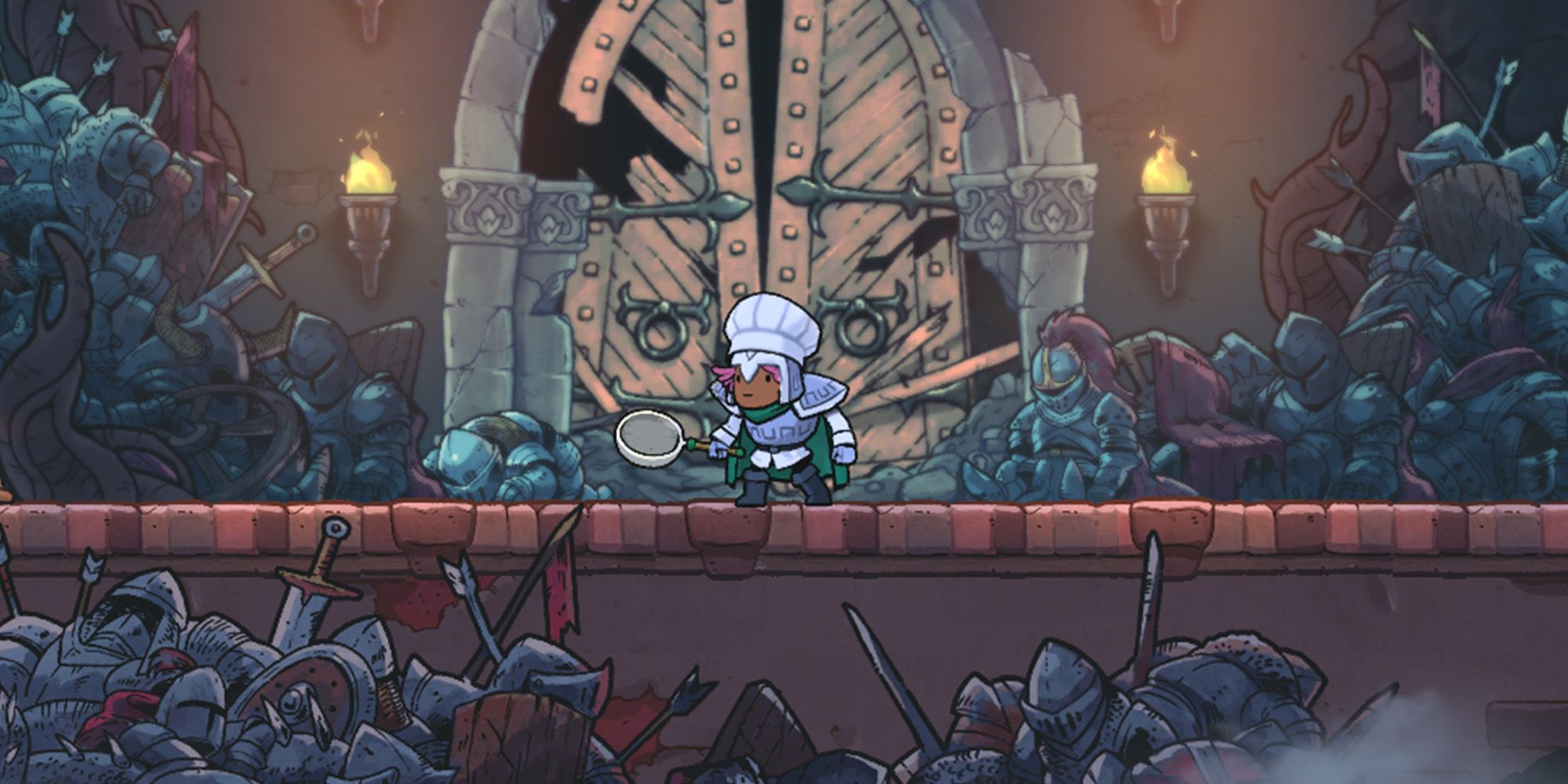 The Chef class is a perfect showcase of Rogue Legacy 2's marriage of wacky themes and fun mechanics. As the Chef, you whack enemies with a frying pan that applies damage over time. You can also use the frying pan to deflect most projectiles, including some boss projectiles.

On top of these amazing offensive and defensive abilities, the Chef's class skill Stew has three charges that regenerate high amounts of health and mana. One use of the skill is recharged any time you get a food drop, which gives you a reliable way to heal yourself in a game that has limited healing. This weapon and skill combination makes the Chef one of the best classes for surviving the dungeon and beating bosses.