Elaine Marley-Threepwood is a crucial part of the Monkey Island series. From the outset, she’s established as a powerful, capable woman with as much wit and intelligence as Guybrush, the supposed hero of the series. Initially, she is kidnapped by the undead pirate captain LeChuck, leading us to believe that she’s another damsel in distress that we must save. However when we valiantly rush to her aid, we end up messing up what turns out to be Elaine’s gambit to destroy him once and for all.

This is a running theme in the series – Guybrush’s swashbuckling adventures seem to run only parallel to Elaine’s. She’s the Governor of the entire Tri-Island area, and this is something the narrative takes seriously. In Curse, she’s present at the fight on Plunder Island, warding off LeChuck’s attack. In Escape, she dives headfirst into the more bureaucratic fight against Ozzie Mandrill and his hostile takeover of the Caribbean. When she finally lets go of the reins of office, she sets out to join Guybrush on his exciting adventures, craving the excitement. She’s a woman of action who knows how to survive danger and thrives in it when she lets the professional facade slip.

This is not the Elaine Marley-Threepwood we meet in Return to Monkey Island. Her personality has changed entirely – the outspoken deuteragonist who kept Guybrush grounded is gone. Replacing her is a simpering, almost misogynistic ideal of a wife who supports her husband unconditionally with no qualms about the dangers he puts himself in or the suspect motives for his quest. The old Elaine once broke up with Guybrush because he was too obsessed with his life of adventure; this new Elaine is content to let him chase a myth. It doesn’t make sense with what we’ve known about her for decades. 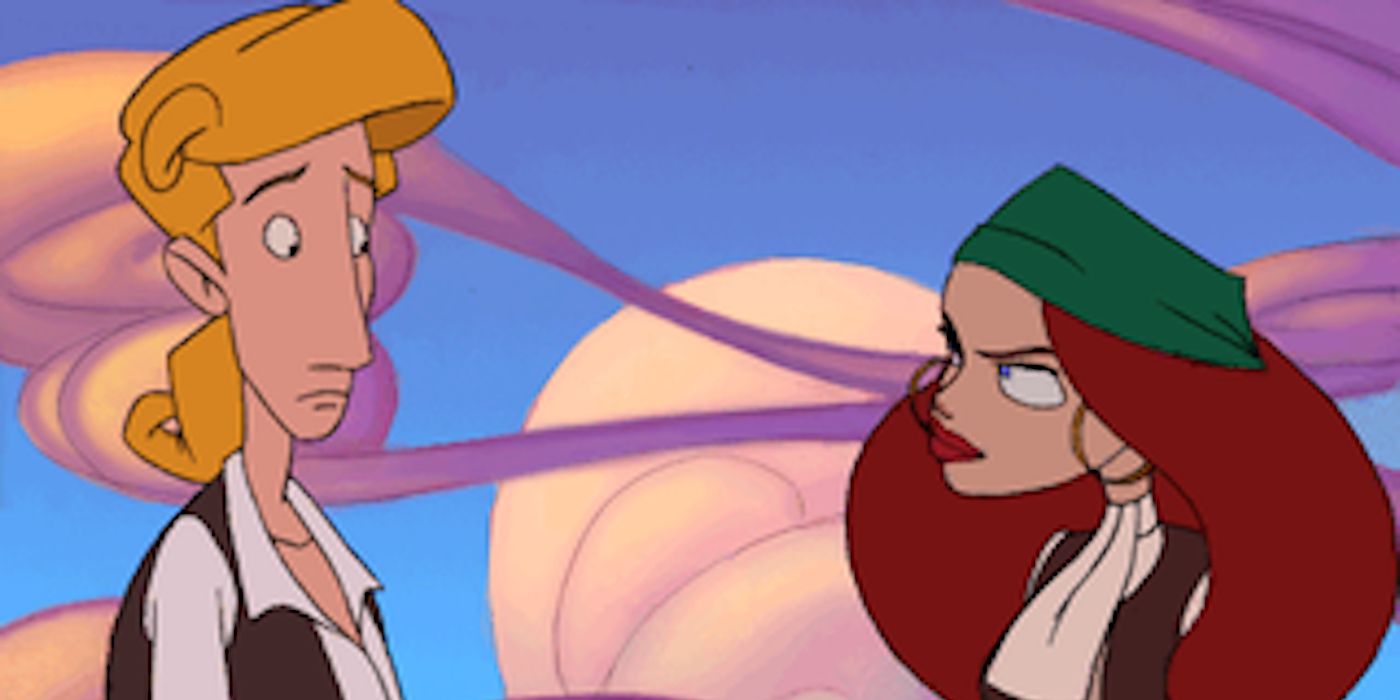 Indeed, Elaine spends most of her time working on her public health campaign against scurvy, which itself is a thinly veiled analogy for the Covid pandemic. When she does deign to take part in the narrative, it’s as an unsatisfying deus ex machina, springing Guybrush out of what should have been some actual peril. Elaine is a prop in Return. She is Elaine in name and appearance only, demoted to a background role when she should be at the fore.

Key to Return’s plot is its framing device has Guybrush telling his son a story. There’s an argument that, because Guybrush doesn’t want to affect his son’s opinion of Elaine, he changes certain aspects of the story as an unreliable narrator. To some, this serves to explain why Elaine’s personality is changed into this unrealistically positive, supportive person, when she was far more grounded in reality. But if this is true, I don’t think it serves the story. One of my favourite parts of Monkey Island was how Guybrush and Elaine’s relationship was written – loving and romantic, but with deep and real conflict. 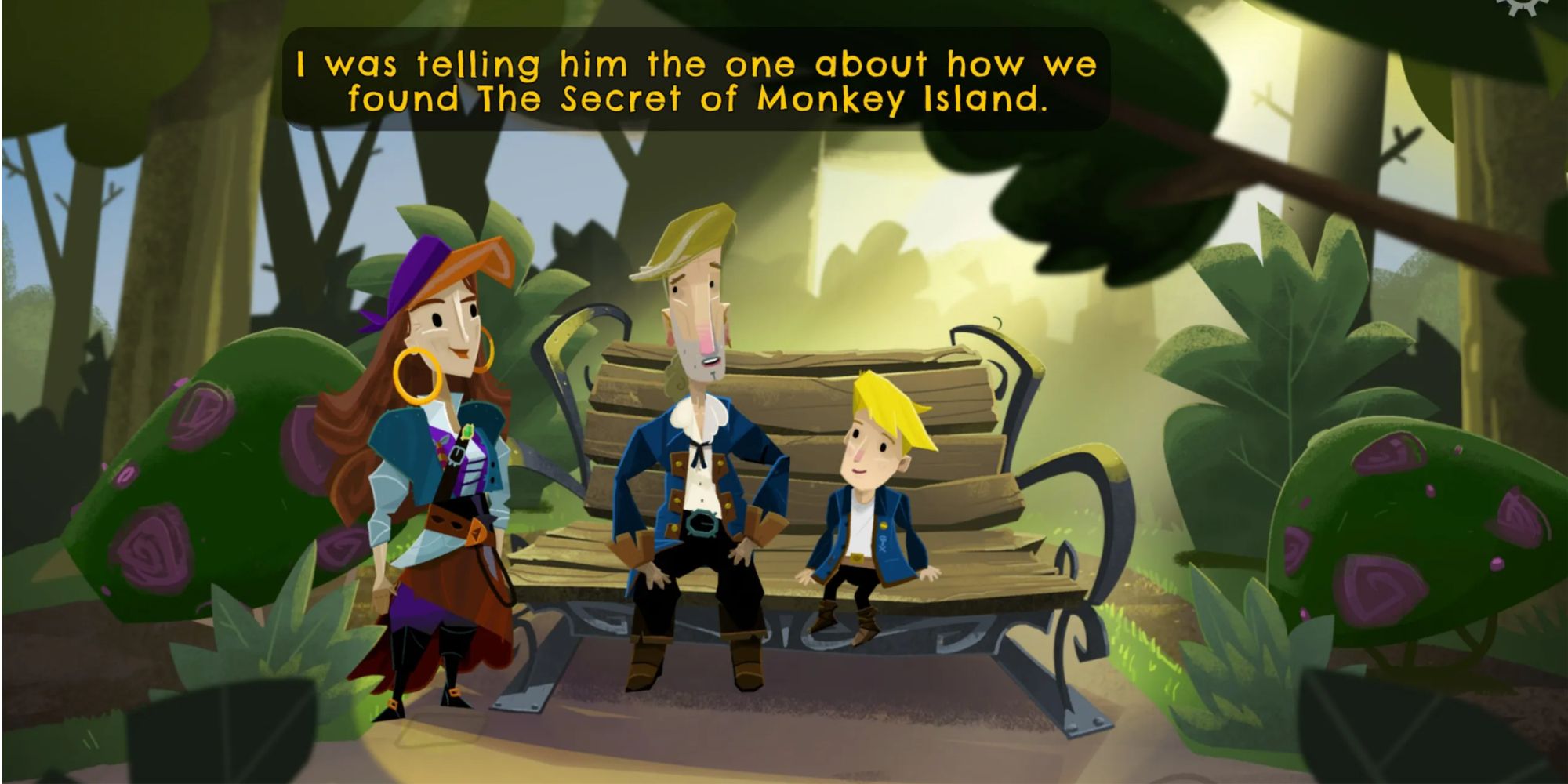 What makes it all the more frustrating is how the game drops hints to this conflict that never emerges. When we arrive at Elaine’s camp on Scurvy Island, we find a photo frame with a torn picture in it, Guybrush’s face ripped out. Scratched-out faces and ripped photos are classic tropes signifying marital discord, but instead of getting any payoff to the unsettling sight, we’re meant to believe that a seagull stole Guybrush’s half of the frame. It’s never brought up again.

In that same act, we see occasional cutscenes where Elaine follows Guybrush’s footsteps, witnessing the trail of destruction he leaves in his wake. We’re not given any insight into Elaine’s thought processes here, but the implication is obvious – she’s not happy. Otherwise, why would she keep retracing her husband’s steps to fix his messes? The opening of the final act finally has Elaine confronting Guybrush about the devastation he’s wreaked on his quest, but it has no resolution. Elaine is forgiveness personified, not requiring explanation or even an apology.

Is this Guybrush censoring heated arguments for his son’s storytime, or are we expected to believe that Elaine has mellowed out so much over the past decade that she simply doesn’t care anymore? We’ll likely never know, thanks to Ron Gilbert’s oft-frustrating ‘the truth is what you make of it’ method of storytelling.

The framing device may explain the change, but it certainly doesn’t forgive it – Elaine, as she is portrayed in Return, contributes almost nothing to the narrative, and it feels disrespectful to a character who stood out in a cast of parodies, tropes, and stereotypes. Elaine is a casualty of a lackluster attempt to be metatextual and to solve problems introduced by an unsatisfying ending to the second game in the series. The result is a narrative that lacks any interpersonal conflict and a character that feels lazily overlaid on top of a beloved fan favourite’s image. Return to Monkey Island sacrifices too much in the name of ‘clever’ storytelling devices – Elaine deserved better, and so did we.