You are here:
Home / Resident Evil Review: The Most Faithful Adaptation Yet

Resident Evil Review: The Most Faithful Adaptation Yet

Netflix’s Resident Evil deserves a lot of credit for telling such a bold story. You won’t find any fan favorite characters here like Chris Redfield or Leon Kennedy, and the only familiar face, Albert Wesker, is not only totally unrecognizable, but has also been dead for 13 years. The reaction to last month’s trailer was dire, and it's clear many have already written the show off for not being ‘authentic’ Resident Evil. And yet, despite how far it ventures away from the source material, it manages to be the most faithful live-action Resident Evil project we’ve ever seen. I can’t think of another adaptation that captures the heart of a game this well while simultaneously abandoning everything fans think they love about it. It’s far from perfect, and the dialogue will most likely turn off a lot of people, but in terms of its story and themes, this is the first Resident Evil show to get it right.

It’s not quite accurate to call Resident Evil an adaptation, since it’s a direct continuation of the storyline established by the games. Everything that happened in the series, from Project W to Ethan’s sacrifice at the Megamycete, happened in the show too. The history of Resident Evil barely comes into play until the back half of the season, and even then it doesn’t matter so much that not knowing the games will prevent you from understanding the show. But still, fans will appreciate its commitment to stay true to the original timeline. The lore conflicts it presents are extremely minor, and while it’s not technically canon since future games won’t take its events into account, it definitely feels like it exists authentically within the Resident Evil world.

The show centers twin sisters Jade and Billie, daughters of Albert Wesker, across two timelines. In 2022, the family has just moved to New Raccoon City, a company town ran by Umbrella in suburban South Africa. Wesker is developing a mood stabilizer called Joy that has the unfortunate side-effect of turning people into zombies, but Umbrella is keen to get the product to market as soon as possible. The teenage girls are struggling to adjust to life in a new city while growing increasingly suspicious of their father, who works strange hours and regularly collects samples of their blood.

Meanwhile, in the year 2036, Jade studies the cognitive function of zombies in a post-apocalyptic wasteland. She is looking for signs of higher brain function in the hopes that the zombies, called zeroes, can be controlled. After being attacked by a massive mutated caterpillar, Jade is rescued by scavengers and brought to a survivor stronghold where she learns her sister Billie is now calling the shots at Umbrella. When Umbrella forces show up and massacre the township to get to Jade, she makes a grand escape and spends the rest of the season in a cat-and-mouse game with Billie, whose intentions remain mysterious.

Discovering the events that connect these two timelines is the mystery at the core of the series, and for the most part it’s a compelling narrative trick. While the season ends with a lot more questions than answers, every event in the present gets us a step closer to understanding how this dark future came to be. In 2022, Jade and Billie’s world is turned upside down when Billie gets bitten by a zombie dog and Jade discovers an outbreak that Umbrella recently covered up in South America and starts investigating her father’s work. The twists and turns the show takes won’t be entirely surprising to Resident Evil fans, but that’s a good thing.

It never feels like it's using Resident Evil’s iconography as absent-minded fan service, the way the film series did. The concepts, names, and monsters that are familiar to Resident Evil fans are more than just jingling keys designed to elicit an “I know that reference!” reaction. Everything here that’s quintessential Resident Evil, from lickers, to chainsaw men, to Umbrella experiments gone wrong, is appropriately placed and essential to the story. Even the new monsters – there are a few – would fit into the games perfectly.

But what really makes this such a strong adaptation of the games is its thematic throughline about genetic destiny. At the heart of Netflix’s Resident Evil is a story about people trying to fix their parents’ mistakes while struggling to do right by their own children. Albert and his daughters, Jade and her daughter, and Umbrella CEO Evelyne Marcus and her son all face the same challenges but respond to them in dramatically different ways. The show’s dual timeline structure emphasizes the cyclical and inescapable reality that no matter how hard we fight against it, we’re more like our parents than we think. It’s an uncomfortable truth that the show explores well amidst all the chaos of a zombie apocalypse. Challenging family connections, even unconventional ones like Albert Wesker and Oswell Spencer, is as core to Resident Evil as headshots and dark hallways.

I am impressed with Resident Evil’s approach to the games and the structure and themes of its story, but the moment-to-moment execution is often a struggle to get through. While the performances are rock solid across the board, the dialogue verges on insufferable at times. Prior to this series, showrunner Andrew Dabb led Supernatural, and it seems those CW teen drama sensibilities stuck with him. While I can count at least three women with writing credits on the show, the unnatural way women talk to each other gave me the distinct impression that the dialogue was written by men, for men. 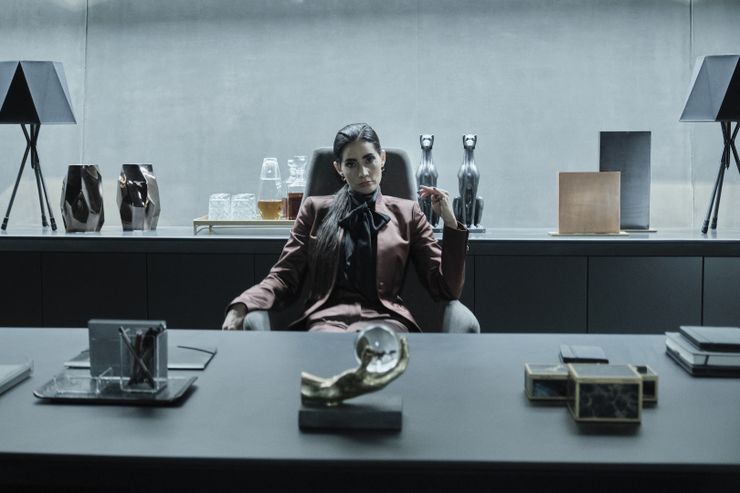 It's something I was able to get past and enjoy the show as a Resident Evil fan (though it's worth mentioning my non-gaming partner could not) because of how much it gets right. The plot is mysterious and intriguing, the characters are flawed and complex, the references and connection to the game are spot on, and the big set piece moments (though occasionally cheap looking) are a lot of fun to watch. I certainly wish the characters from the game were more present, and there’s indication in the finale that they will be in future, but if you’re concerned that the show won’t earn the Resident Evil name, I assure you it does.