You are here:
Home / Remnant: From The Ashes – 10 Best Rings

Remnant: From The Ashes – 10 Best Rings

There are a lot of rings in Remnant: From The Ashes. Each one has its own unique pros and cons of wearing them with some providing buffs or abilities to your character, whilst others could influence things like enemy damage or awareness level.

Some of the rings, if combined with the right build, can be absolutely game-changing and can turn a struggling doomed run into an unstoppable player pain train of damage output. But with so many to choose from it can be tricky figuring out which is the right one for you, so here are 10 of the best rings that you should consider. 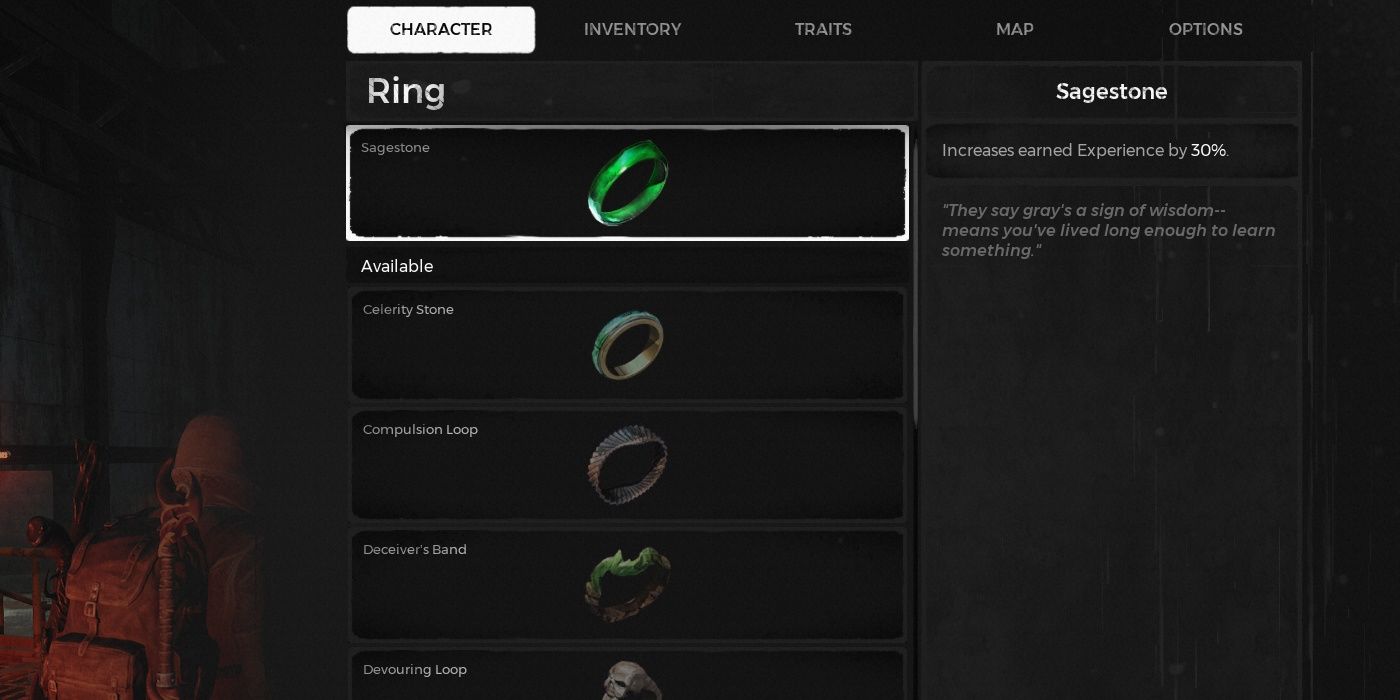 The Sagestone is arguably a must-have for new players. This luminous green band increases all earned experience by 30%, perfect for those looking to power-level early in the game or give a little bonus to their grinding efforts. Plus, it also shares the experience gained with party members if they’re within range.

The Sagestone ring isn’t craftable, unlike the boss weapons, instead you can pick it up in a random location on Earth. Because all the areas in Remnant: From the Ashes are procedural don’t worry if you can’t find it, there’s always a chance it might not have spawned. 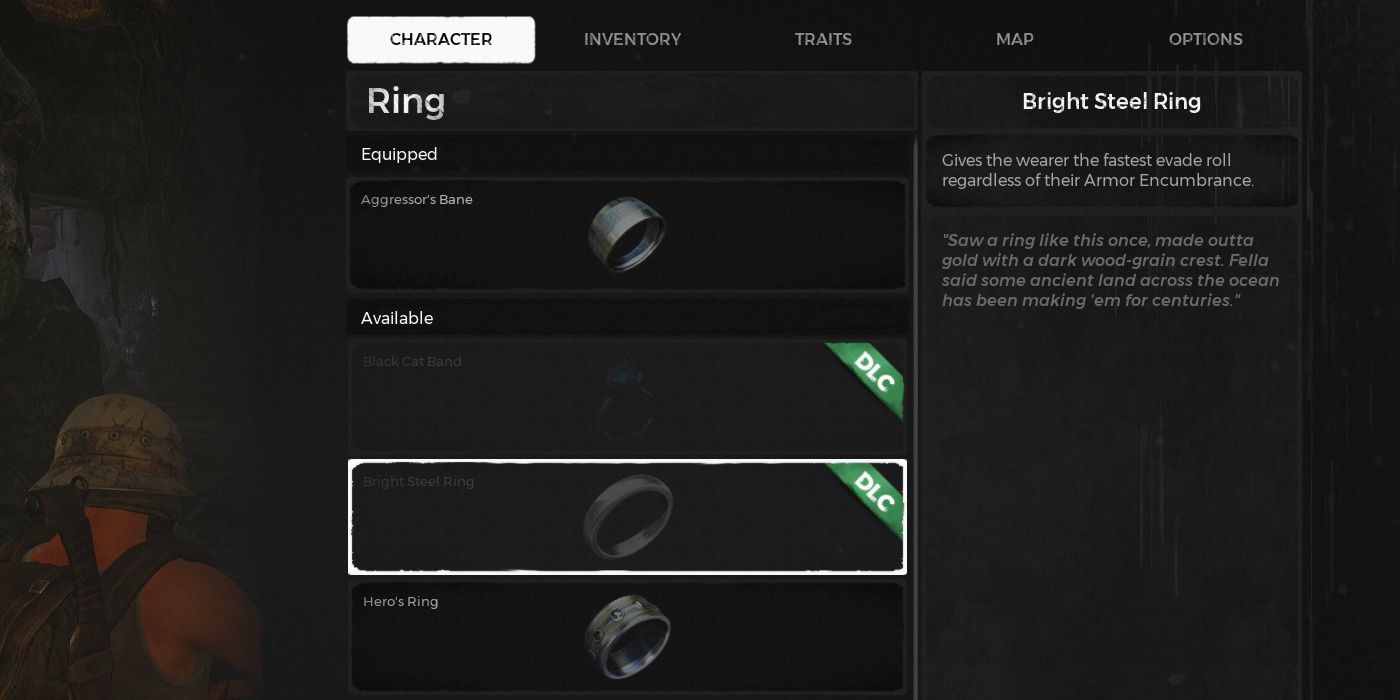 Armor encumbrance in Remnant: From The Ashes is something that’s not often mentioned, but it is there. Just like how equipping heavy armor in Dark Souls would cause you to ‘fat roll’, more weighty gear in Remnant will also get in the way of your ability to dodge.

One way around this is by using the Bright Steel Ring – an option that grants the player the quickest evade roll in the game with no encumbrance level hindrances. You can unlock it by defeating every world boss in survival mode twice and it’s also account bound, so it can be used across all of your characters. 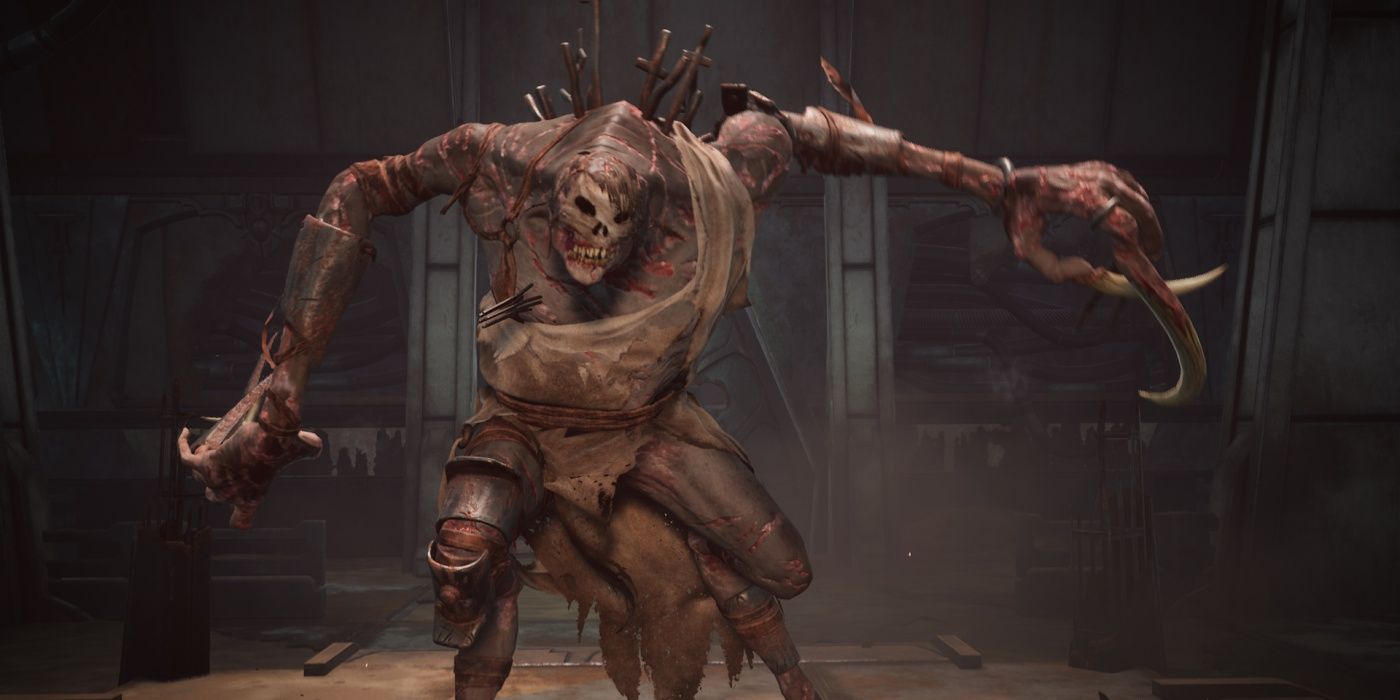 Remnant: From The Ashes is primarily firearm-focused since there are a lot of guns, but there are some fun melee weapons to swing around. So a big hitter build is possible with the right loadout and rings.

One item that’s perfect for those running a fast melee build is the Akari Warband. This ring increases both Crit Chance and Crit Damage by 15% for 20 seconds after a perfect dodge. So if you like to get up close and personal with mighty strikes then beat either The Harrow or Claviger on Hardcore Mode to earn it. Like the Bright Steel Ring, it’s also account bound. 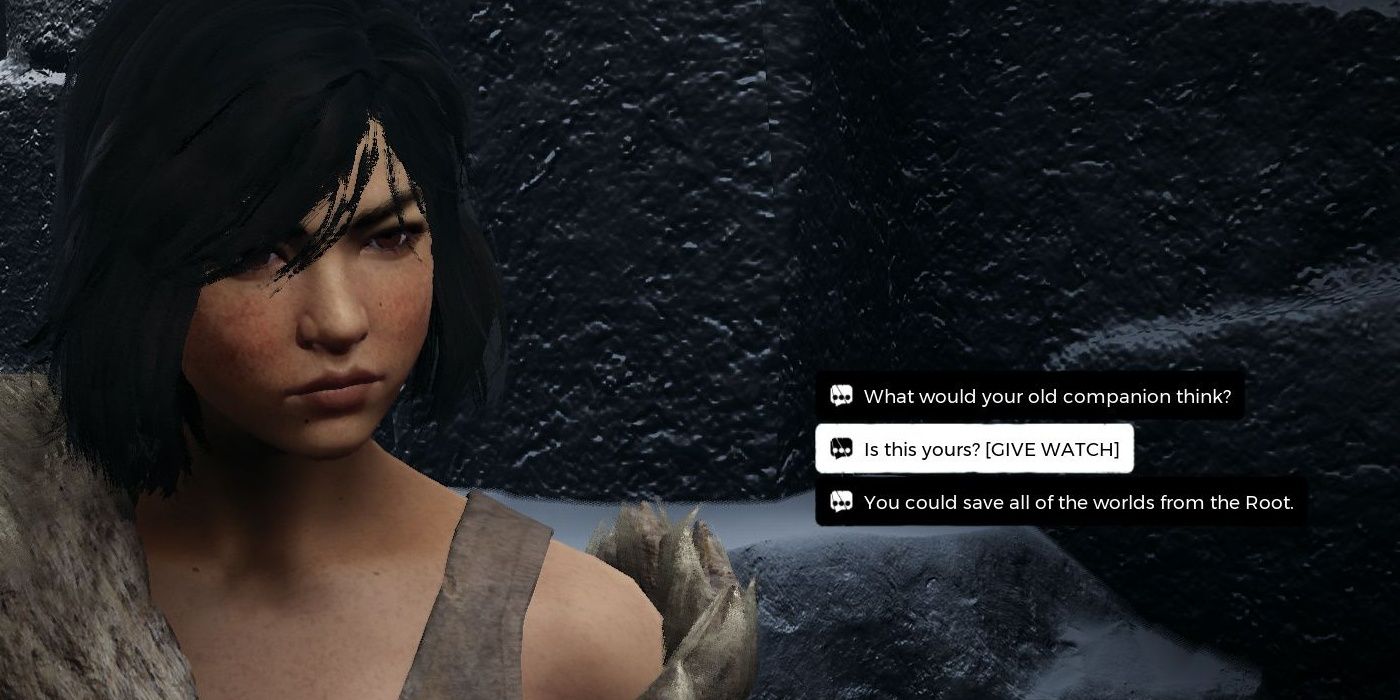 Unlike Dark Souls where you can hide from incoming damage behind a massive shield, Remnant takes the Bloodborne approach of focusing more on well-timed dodging. Although there’s going to be times when you’re mobbed with so many enemies at once that evading isn’t an option.

Rather than tanking the hits, equipping the Amber Moonstone might just get you out of any tough spot in a pinch. This sparkly little ring applies a 25% damage reduction and immunity to all status effects whenever your health drops below 25%. This little trinket is part of the Subject 2923 DLC and can be picked up from Clementine when you give her the Janitor’s watch. 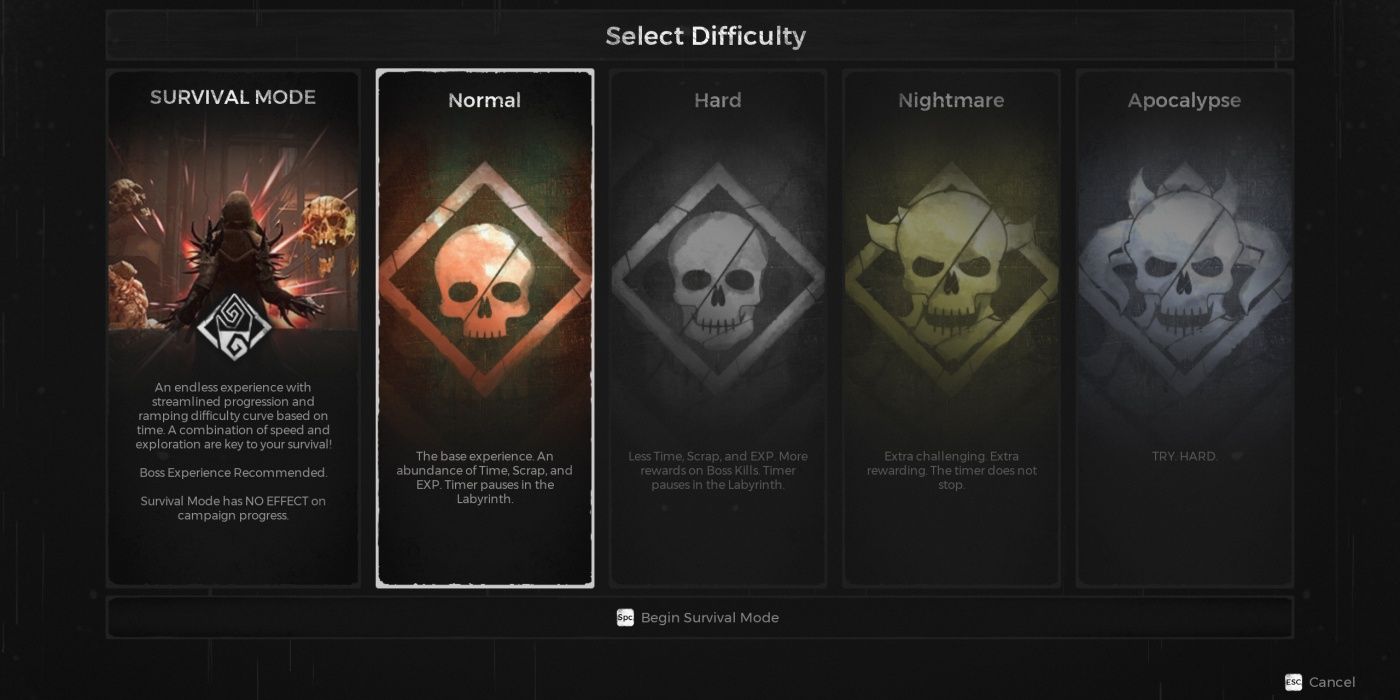 Another Subject 2923 DLC item, the Black Cat Band is potentially game-changing if you manage to get your hands on it. Available after beating every normal boss twice in Survival mode, this account-bound ring prevents death.

Instead of dying, when players take fatal damage their health will drop to 1, then 1.5 seconds of invulnerability is granted whilst movement speed is increased by 25% for 10 seconds to allow for a swift escape from danger. It also comes with a one-minute cooldown, making it quite the powerful asset for higher difficulty runs. 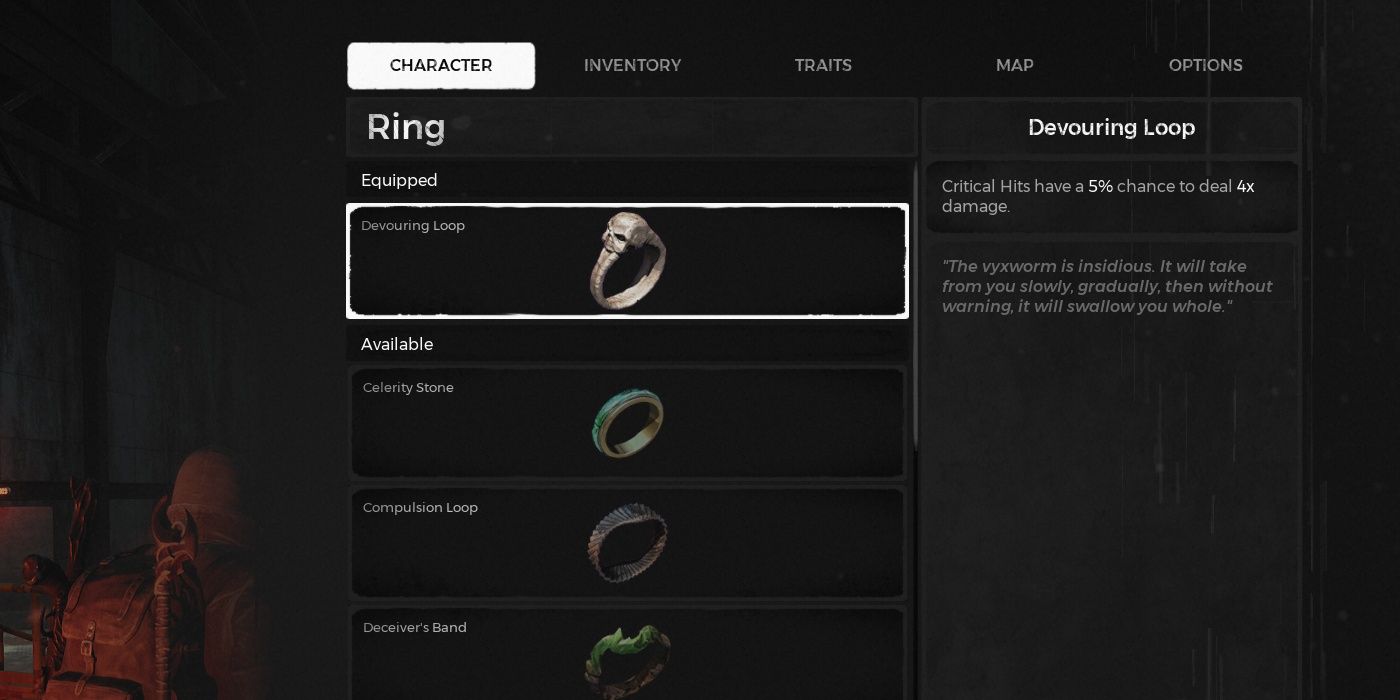 There are a lot of fun, weird, and overpowered builds you can make in Remnant: From The Ashes. From unkillable melee monsters to super healers, there’s a great degree of customization.

For those looking to do big number damage in a short amount of time, then the Devouring Loop is worth looking into. This skull-faced artifact sitting upon your finger grants the wearer a 5% chance to deal a massive 4x damage with Critical Hits. Although that may seem small, this only increases if you decide to spec your character into a build that increases the regularity in which Critical Hits occur. 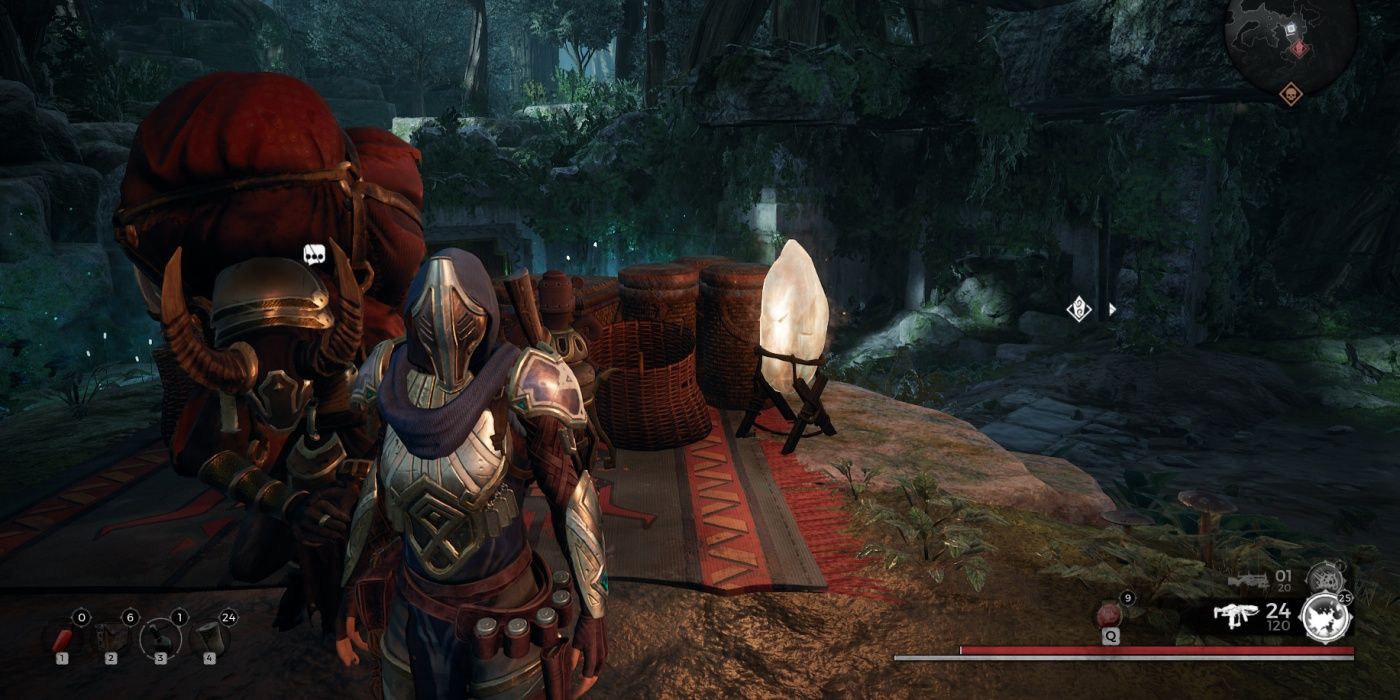 The majority of enemies you will be fighting in Remnant: From The Ashes are monsters who love to maliciously dash into melee range and take big meaty chunks out of your health bar.

Many runs have been brought to a screeching halt from hordes of little snappy critters swarming over a party like piranhas, or one big heavy hitter decimating players with their heavy swings. To give yourself an advantage, consider sticking on the Guardian’s Ring after picking it up from the Stuck Merchant on Yaesha. This teal gemstone band reduces all incoming melee damage by 20%, a considerable chunk of defense that could pull you through some tough encounters. 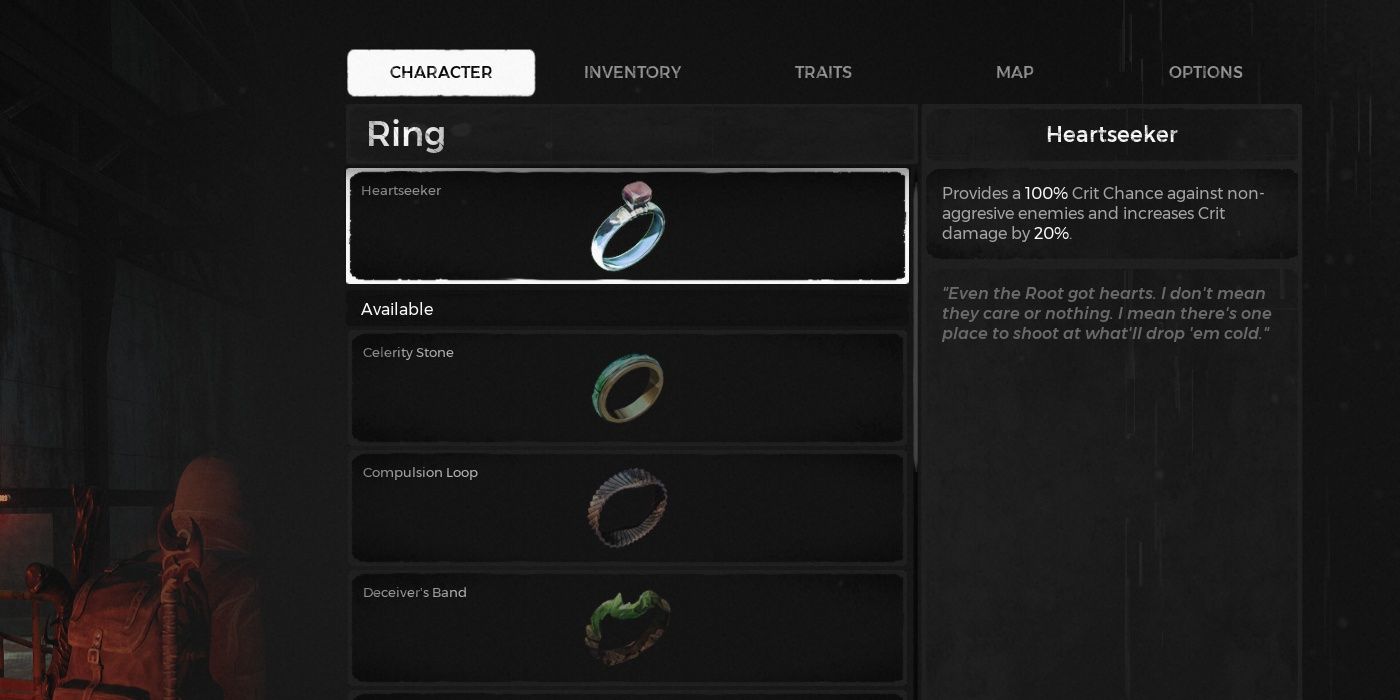 A sniper build in Remnant, whilst challenging for solo players, is completely viable in co-op with the ring. The Heartseeker is perfect for a party with a dedicated ranger in the back as it can provide a considerable damage buff.

Wearing the Heartseeker gives players a 100% Crit Chance against non-aggressive enemies as well as buffing Crit Damage by 20%. Perfect for that opening ambush shot. This item is found on earth in a random location. If it doesn’t spawn try re-rolling the level, revisit the area in NG+ after you beat the game, or play through another player’s world. 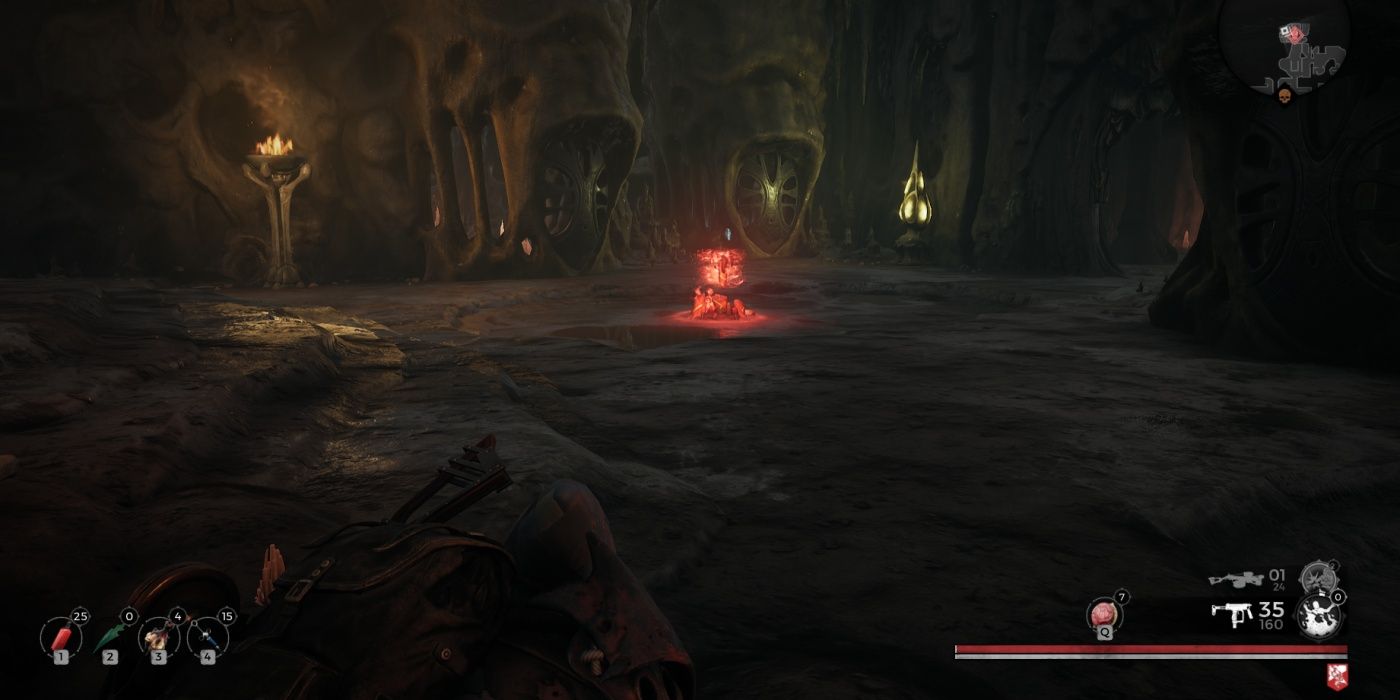 Every party needs a healer that can get in, get everyone up and get out before the next big hit downs anyone again. Remnant: From The Ashes has a great support class along with a few others, but if you want to be the best Medic for your team try wearing the Hero’s ring.

What makes this item special and ideal for those that prefer to support the team, is that it increases movement speed by 25% as you sprint toward an injured teammate. It also increases Revive Speed by 100%; plus: the player can’t be staggered whilst reviving. You can pick it up by completing the Fetid Pools Dungeon in the Swamps of Corsus. 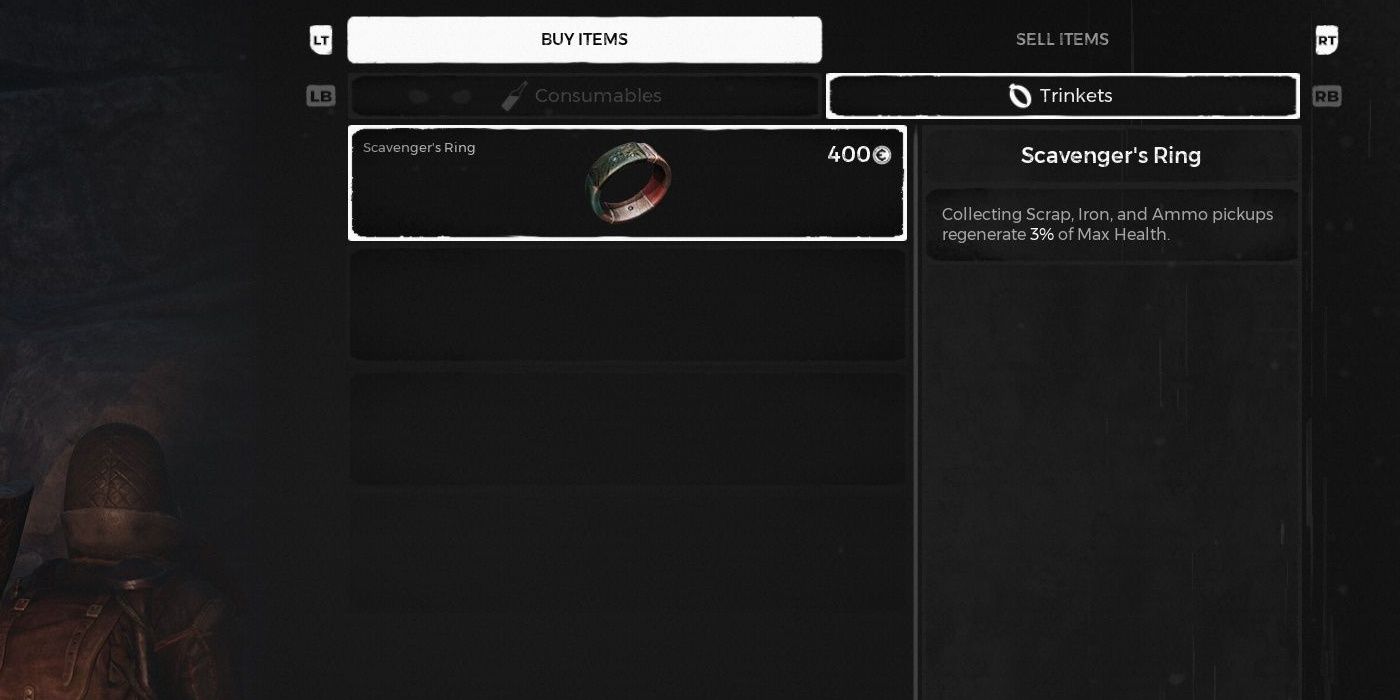 If you’re looking for another ring that’s pretty game-changing then the Scavenger’s Ring is worth picking up as this unique item turns dropped loot into helpful buffs.

Whenever scrap, iron, or ammo of any type is collected the Scavenger’s Ring will apply a regeneration status of 3% of your Max Health for 30 seconds. During this time ranged and melee damage is also buffed by 10%. With how often resources are found in Remnant, these buffs could essentially be constantly active when you’re out on an adventure. The ring can be bought from the Krall Mother in the Subject 2923 DLC.

NEXT: Remnant: From The Ashes: The 15 Most Powerful Weapons, Ranked 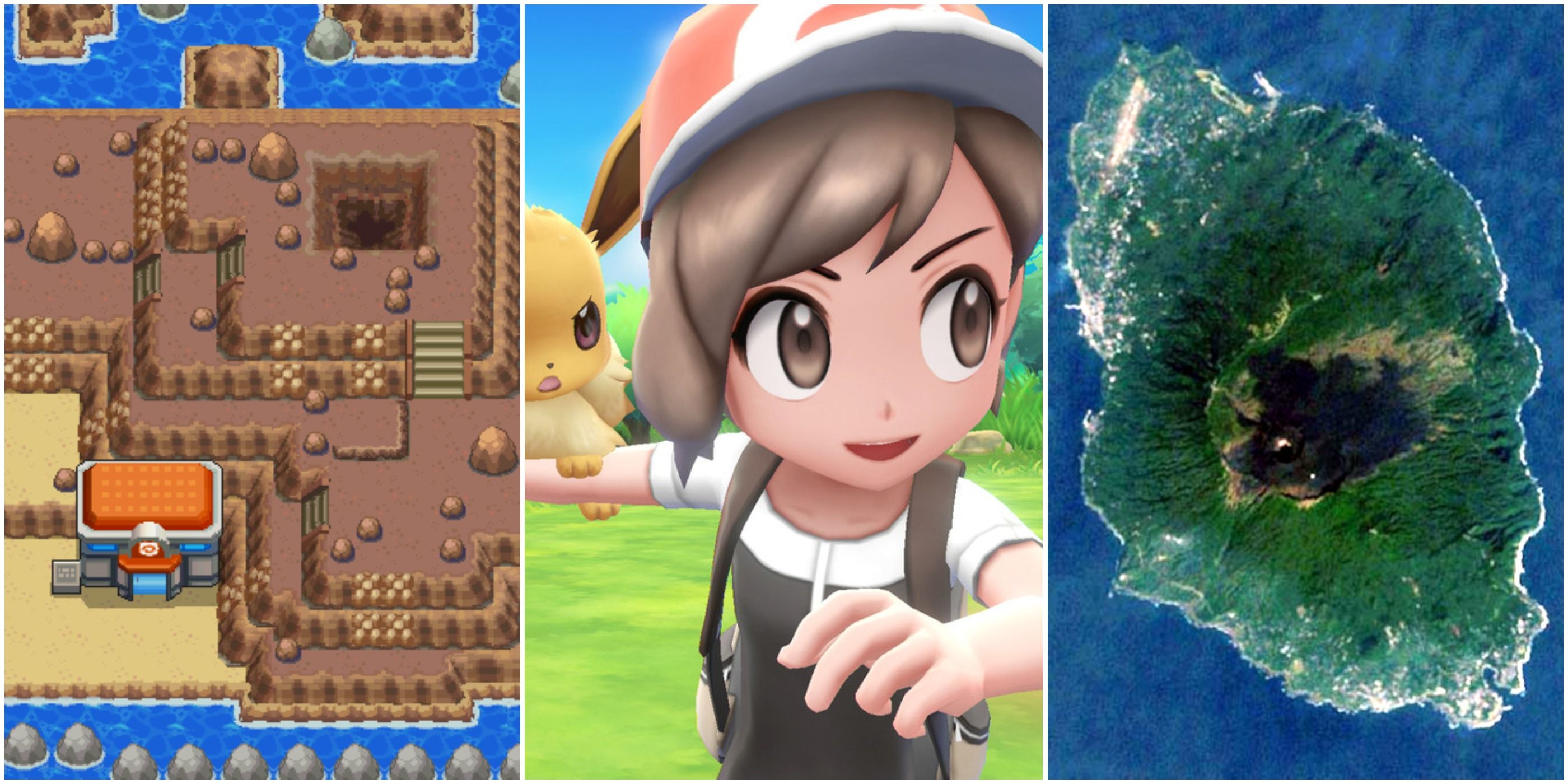 An experienced Freelancer whose worked on a number of gaming sites over the years. Matts’s passion for gaming covers a range of titles and topics, plus he streams regularly in his downtime with his friends on his own Twitch channel.