Cordelion has just one piece of armour, and again, it’s inside a Pocket Dimension. Inside the Rubion Forge, off to the left of the warp pad, and in the destroyed dimension, right next to the Crystal. Inside, you need to shoot the bouncing pads to expand them, then jump across them.Cordelion in Ratchet & Clank: Rift Apart is Ratchet’s turn at playing through two levels in one, after Rivet had the chance on Blizar Prime. It involves a strange, angry monster, and a mysterious source of electricity, as well as a helpful drone that’s desperate to be your friend. Here, we’ll guide you through the level’s plot and combat, while sweeping up all of the collectibles like three Golden Bolts, one Spybot, and one Pocket Dimension too.

Get inside the Rubion Forge

When you arrive on Cordelion, all there is for you to do is to step on the platform over to the main forge. However, it’s currently locked. Go up to the top of the forge via the staircase and hit the crystal to transport yourself to the destroyed dimension, which is very frosty. Fight off the enemies and slide down the ramp where the staircase was. The elevator, previously locked, will now be open. When you return to Cordelion later on to sweep for collectibles, there’s a warp pad that takes you inside. However, before you go in the elevator, you should hover jump and rift across to the small platform stood all by itself with a crystal In the living dimension, this platform is home to the first Golden Bolt. 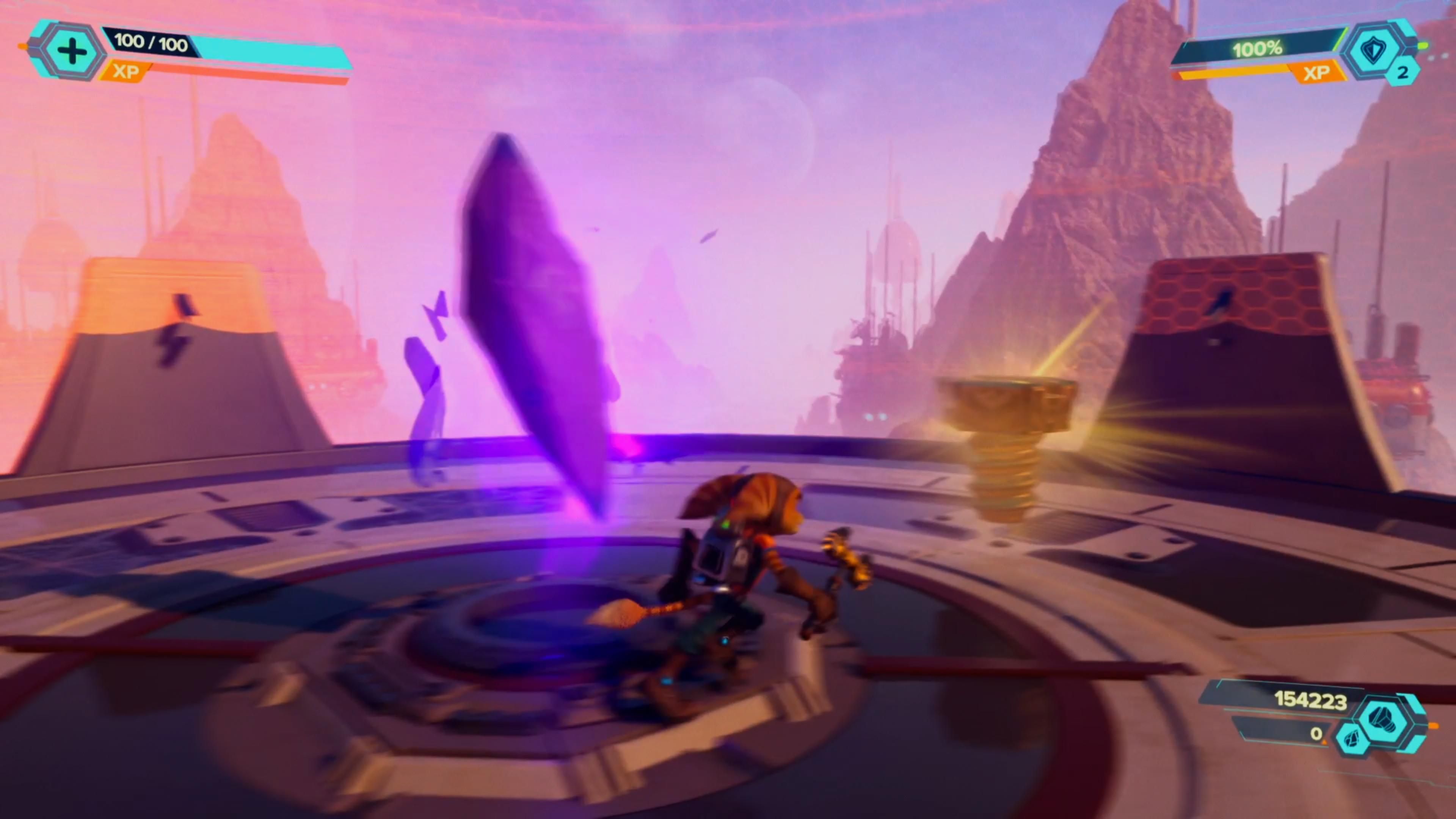 Inside, head left and follow the linear path of corridors around until you hit a locked door. Slightly back from that locked door, on your left, is an opening. Go through it. Here, you’ll meet the friendly droid, Junkbot, and will need to bounce on the pads across the water before wallrunning up to the platform.

Keep wallrunning and swing across to the controls, which will drain the room. Now return to Junkbot by the door and follow it through the facility. It will open the locked door, then lead you through the corridors. Soon, you’ll meet Juice in a cutscene, but you won’t need to worry about him until later. 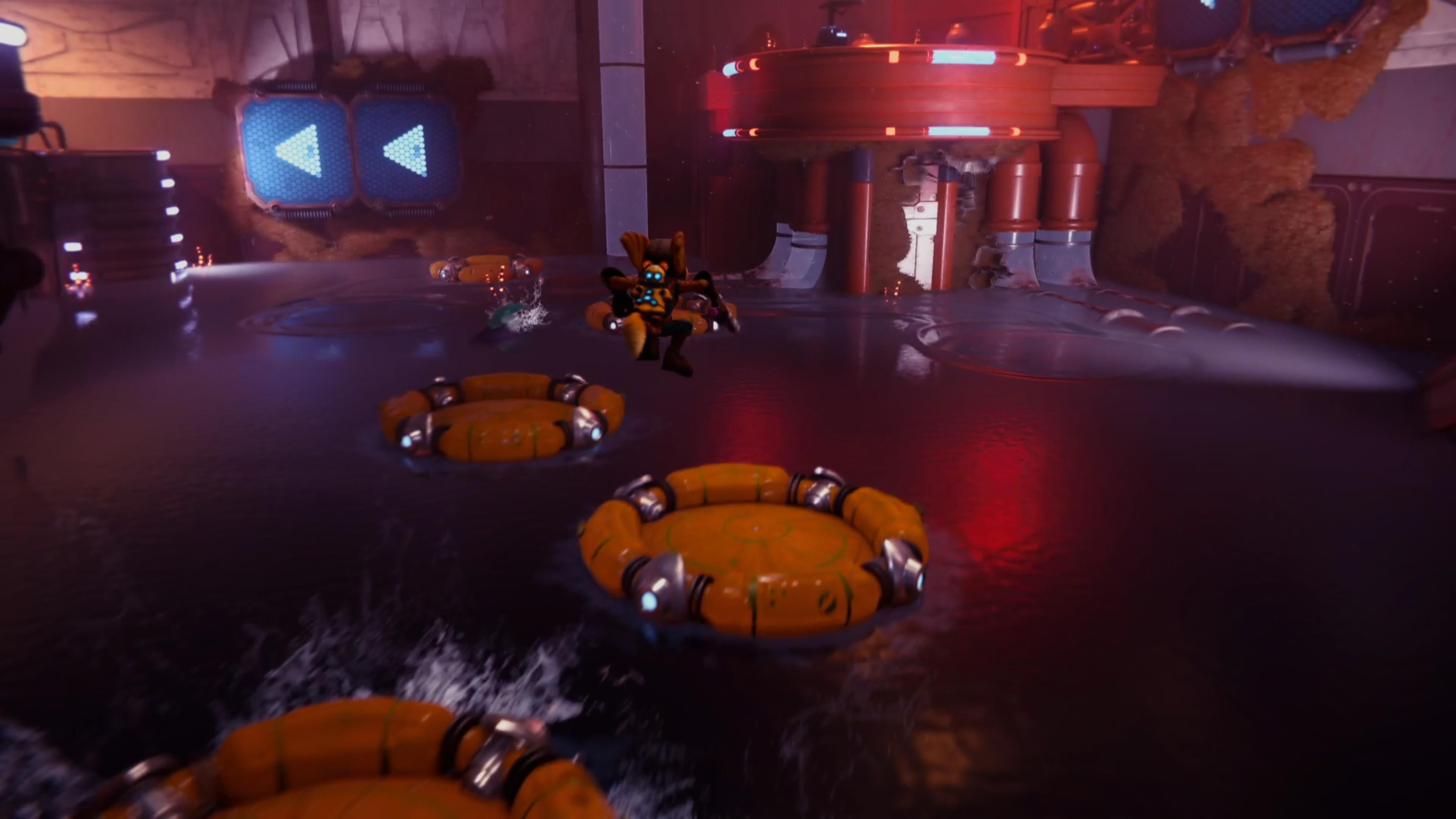 Power up the elevator

Junkbot will lead you to an elevator to the Forge, but it’s currently broken. You’ll need to climb up the platforms in the room to hop to the top of the area, but Ameboids will attack you as you go. The bigger ones split into smaller ones, so focus on area weapons rather than heavies. 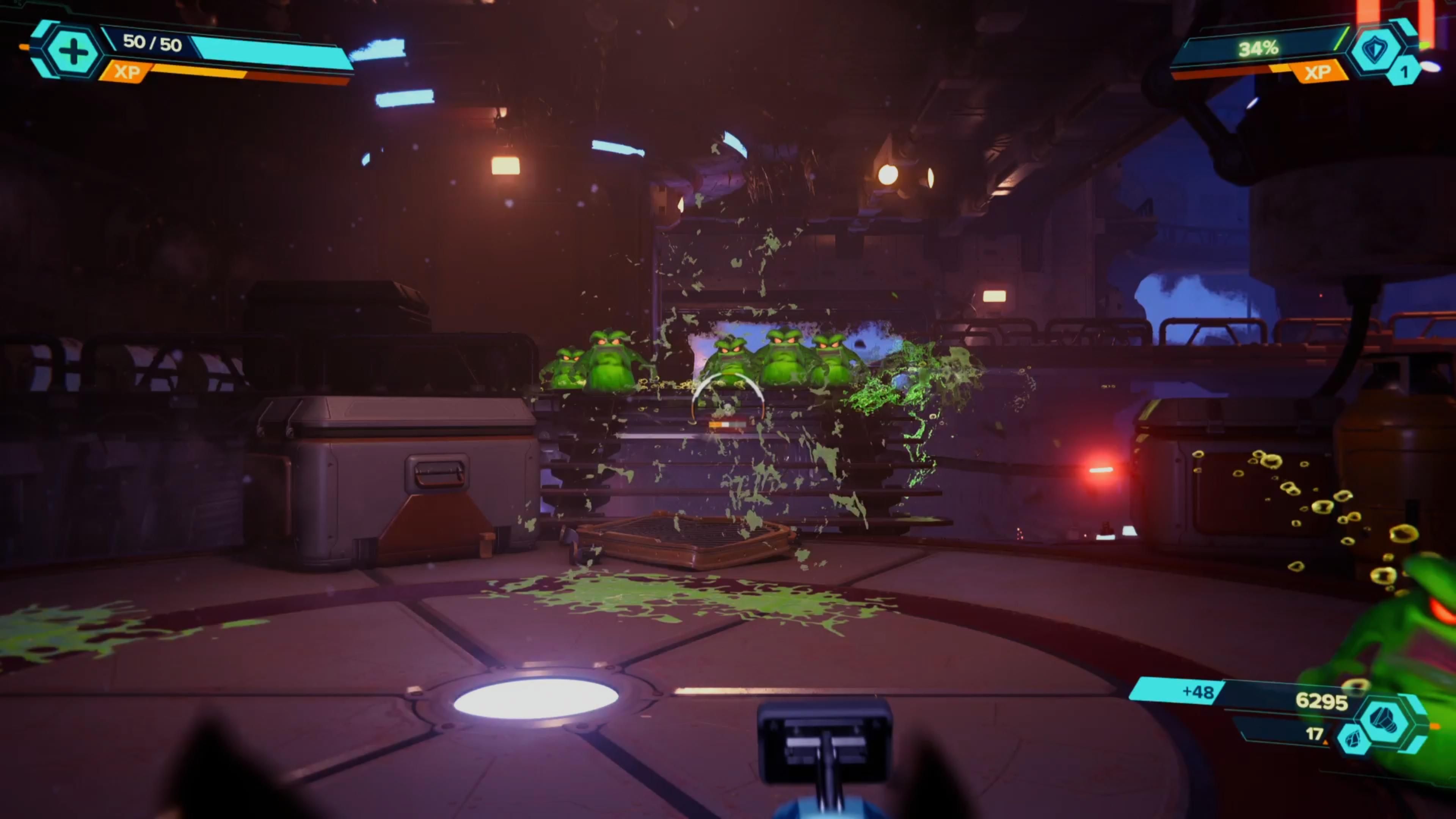 Once they have been defeated, swing across to the terminal and activate it to power up the elevator. Return to Junkbot and get in the elevator to meet Juice again. Don’t worry, he’s behind glass right now.

Once you get out of the elevator, you’ll be in a room with a crystal. Jump across to it and hit it to return to the living dimension. From here, go through to the next room and meet Junkbot, again. He won’t remember you, and Kit will convince him to let you stay. 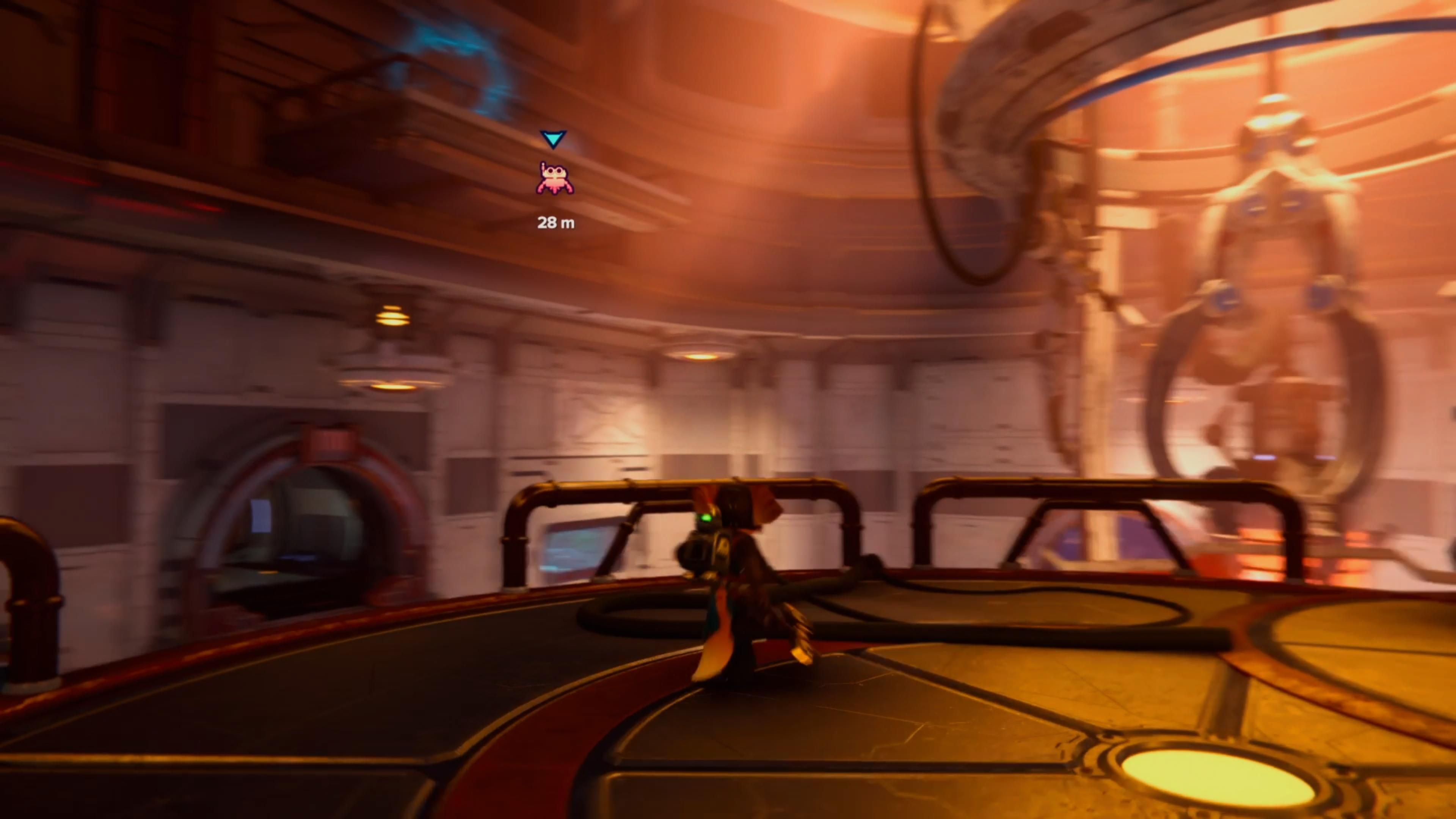 You need to reach the Forge controls on the raised platform, but luckily there is a bounce pad nearby. Jump on it, but before ding anything else, rift up to the high platform behind you and grab the Cordelion Spybot. Return and activate the Forge. Unfortunately, you don’t know what you’re doing, so it explodes. You’ll have to fight off a bunch of robots here as you run to the crystal to escape to the other dimension. However, with the doors locked, you can’t go back to the last one, and instead must press forwards. Eventually, you’ll come to a room with a crystal in a glass chamber – fight off the robots here using heavy weapons, and spin the bolt to raise the chamber, then hit the glass.

As you hit the crystal for the destroyed dimension, you’ll emerge right next to a Pocket Dimension. Inside, you need to shoot the bouncing pads to expand them, then jump across them. In here, you’ll find Cordelion’s only piece of armour. 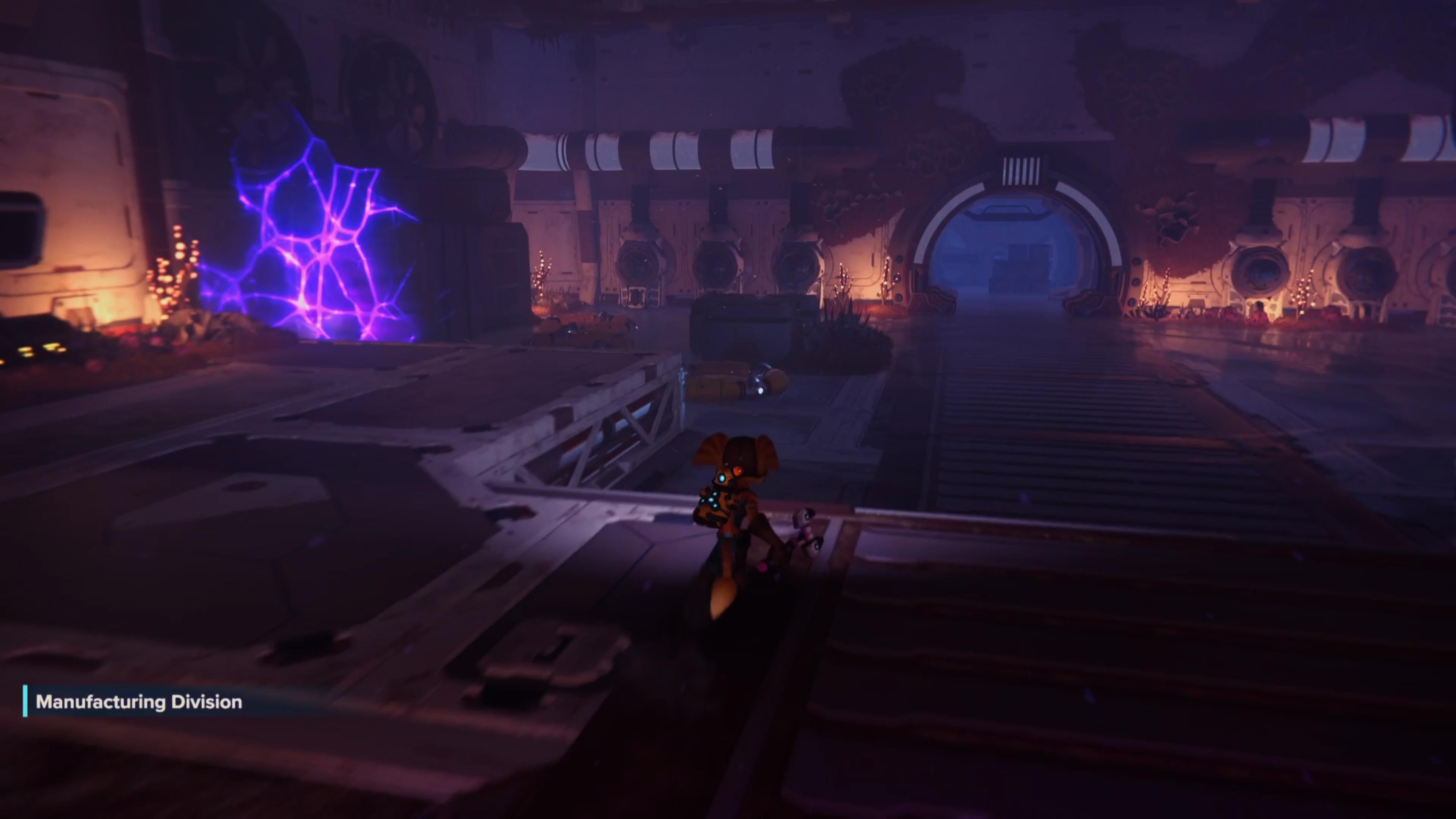 Once you’ve done the Pocket Dimension, you can press forward, but will soon find progress barred by a virus. Use Glitch to destroy it.

Head forwards, grab the pulse upgrade, and make your way down the curved path. Use the shield switch on the raised platform and on the floor to kill the virus on the wall. The next area has four viruses – one of the central column, one right in front of you with a switch nearby, one off to the left with a switch next to it, and one in a larger shield to the right with a switch around the corner. With these taken out,  there’s just one virus left. 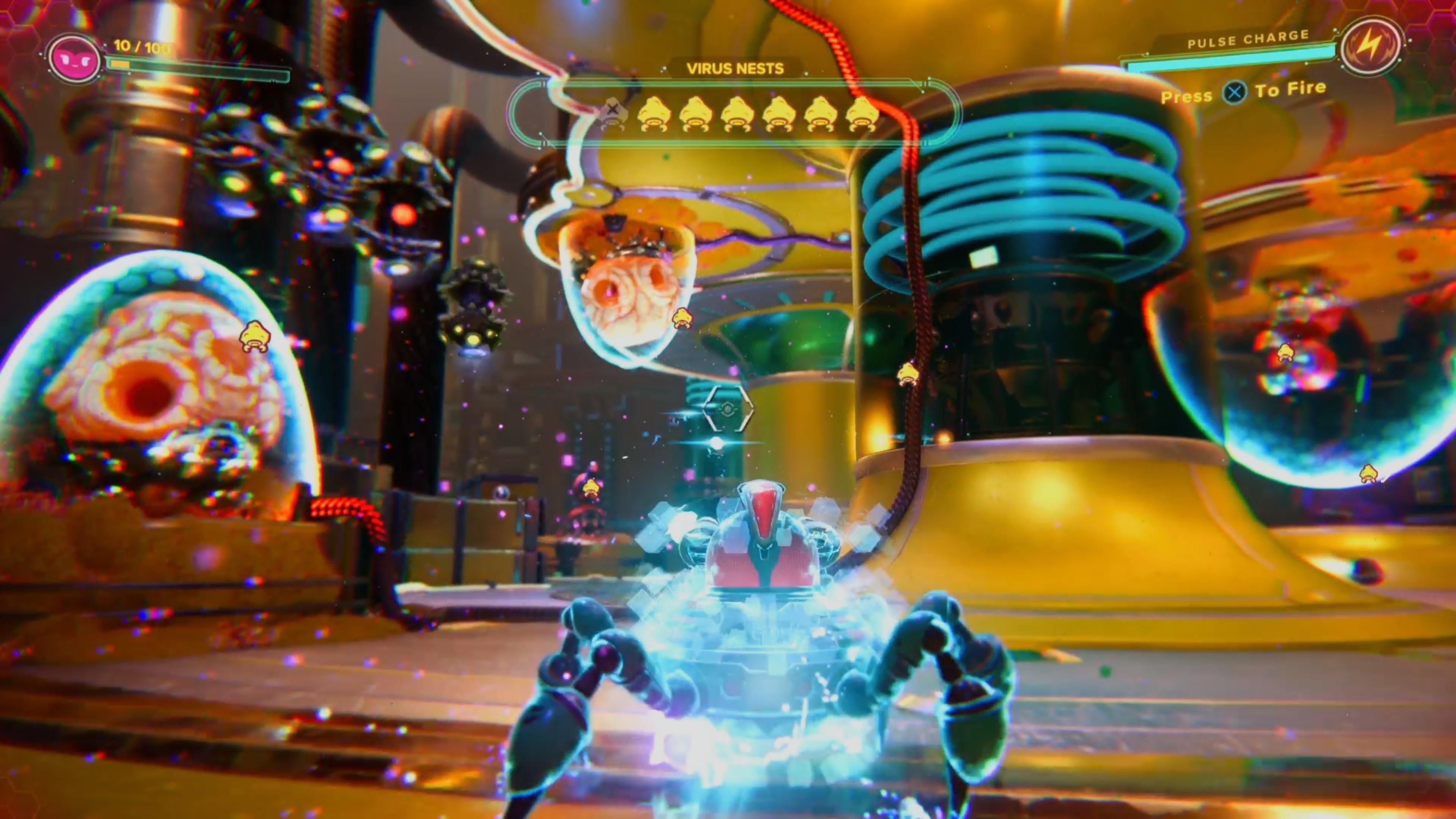 Climb up to the ceiling and head through the tunnel to reach the final virus, which lives in a big shield with a switch right next to it. Take it out, but get ready to be swarmed – that was a trap. Lots of smaller viruses will attack you – try not to let them surround you, and use your Pulse Charge when you can. There are two virus nests around the outside, and taking these out is what’s needed to clear the virus. 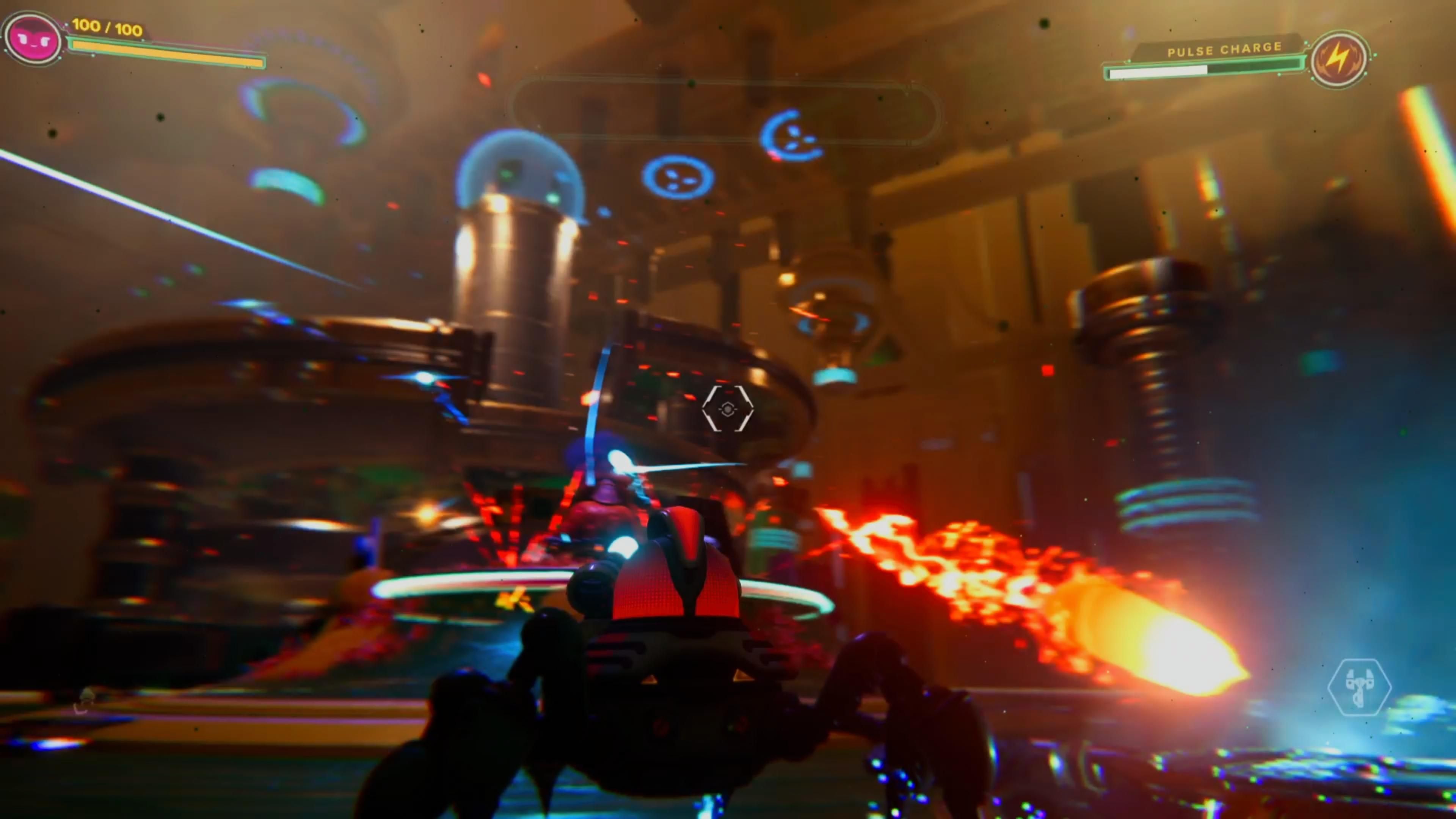 After this, you’ll find the working Forge in the destroyed dimension. As usual, there’s a bit of traversal to get there, but nothing too tricky. However, there’s no power source, so you need to return to the living dimension to grab theirs. Head out the door where the quest marker and sneak past Juice. Unfortunately, you need to open the door by stepping on a switch, which is very loud and will draw Juice’s attention. You need to break the Jelly Cannister to distract him – alternatively you can phantom dash off the switch so Juice stands on it, then dash through the opening door. 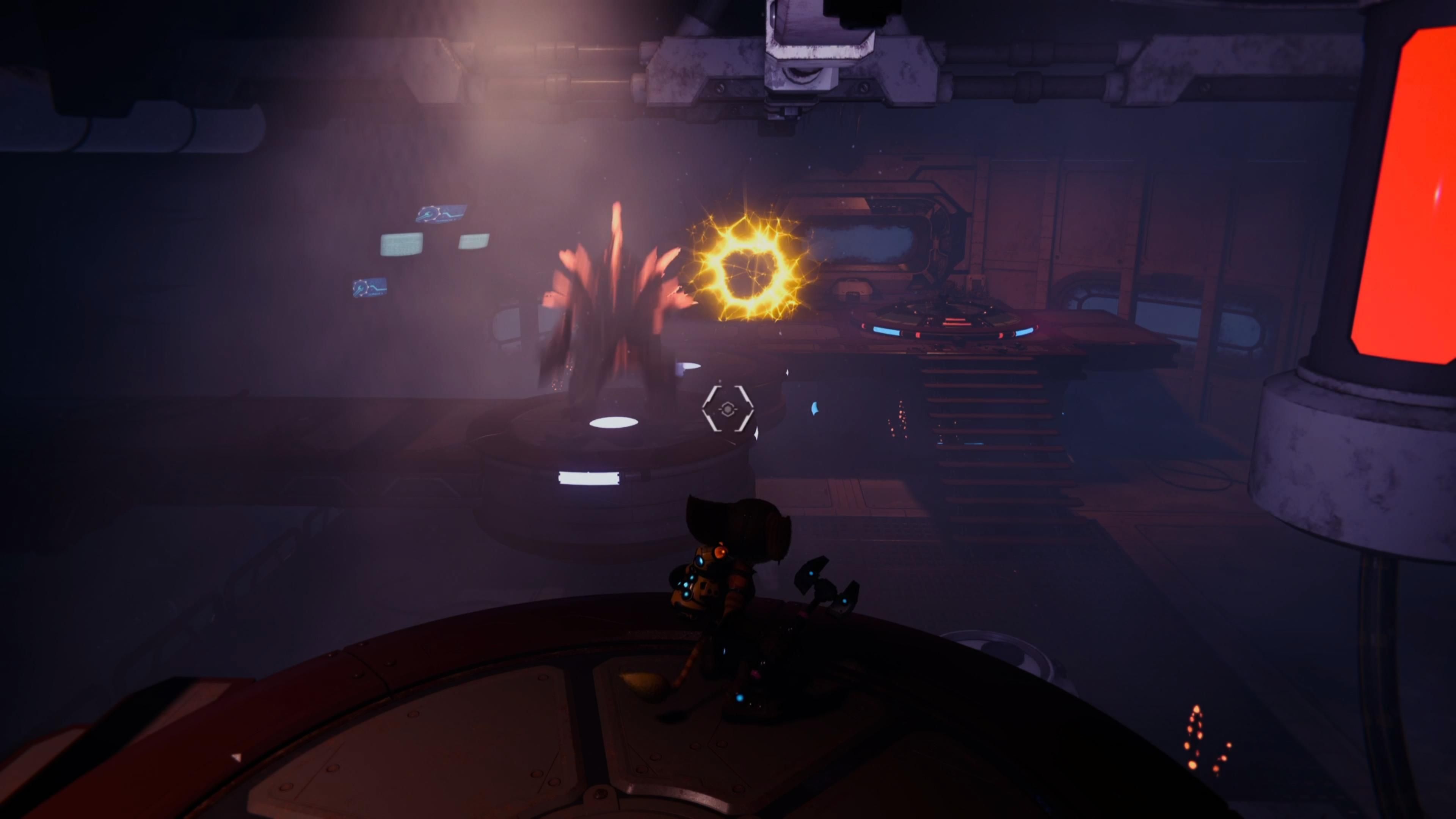 Next, you’ll come to another locked door, with two cables attached to it. One goes left, and one goes right. You’ll need to deal with both before the door opens – we’re going right. In this room, there is a bolt crank to open, but as soon as you twist it, Juice will chase you. Turn it as much as you can before he arrives, then rift away. As he pursues you, rift back and finish turning the bolt. Now head back to the main room and deal with the switch on  the left. You’ll need to use the same Jelly tactics to open the door, then inside the room, activate the terminal. Once you do, you’ll need to fight off more Ameboids, then can activate the terminal again. You’ll have to listen to a cryptic message where Junkbot is upset that Juice is being hurt, before you can leave and head back to the main room. Be warned, Juice will chase you.

Once you go through this door, there will bad a pad to step on, which will cause water to flow into the facility. Use the Mag Surface boots to jump across the gap, then continue on the linear path. It’s tricky to line this jump up, but if you move around the edge, the option will appear eventually. 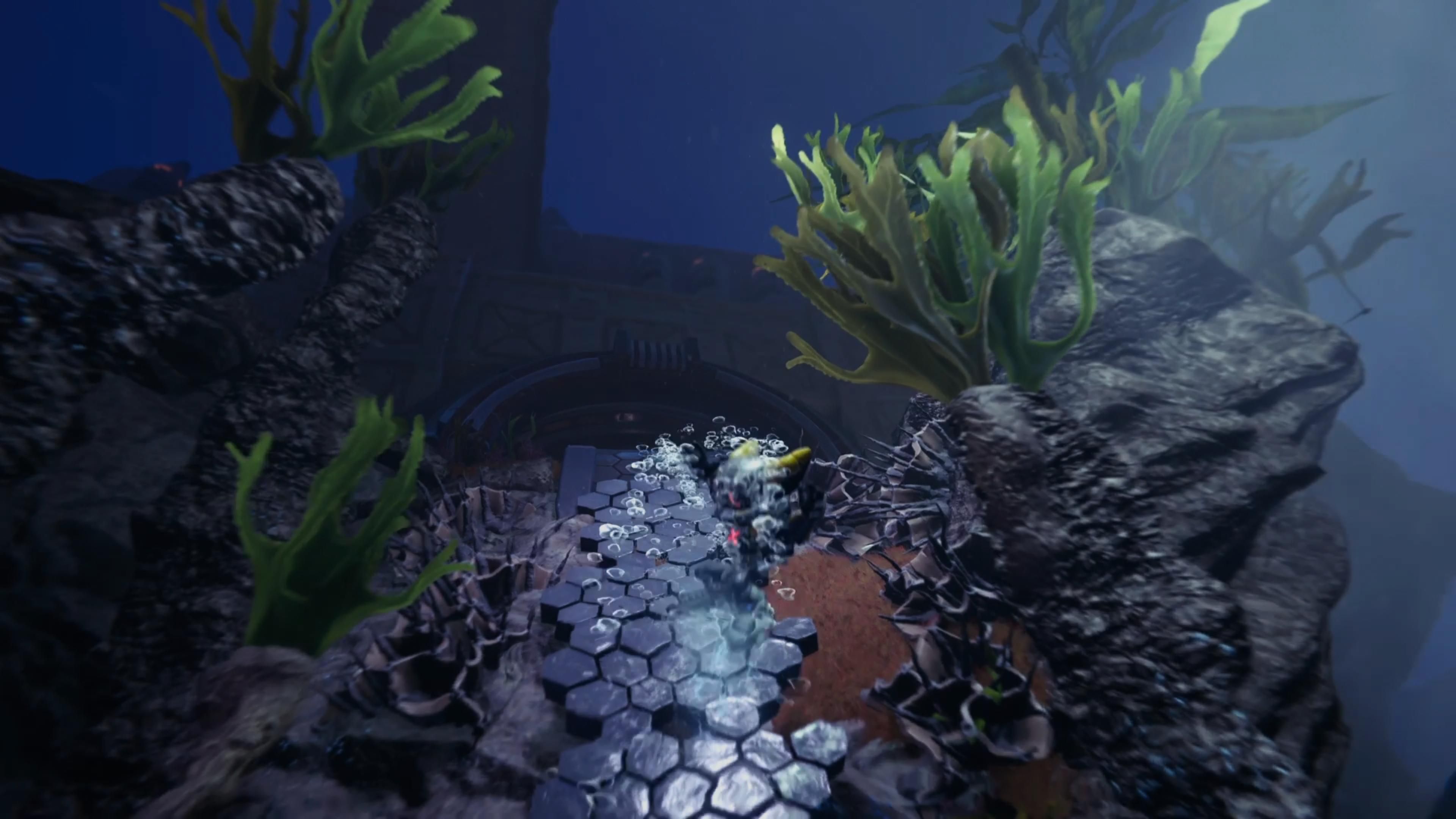 Once you have gone through the tunnel, take the fork to right and jump across the gap then climb the wall to reach the second Golden Bolt.

As you reach the other end, you’ll be back on dry land and will be able to hit a crystal to return to the living dimension.

Here, you’ll need to go through the next room and fight off a bunch of robots to activate a bolt crank at the end, which will reveal that the true power source is Juice. We had to reload this checkpoint to get the crank to work, it seems like one of the bots got trapped in a room and couldn’t be killed. 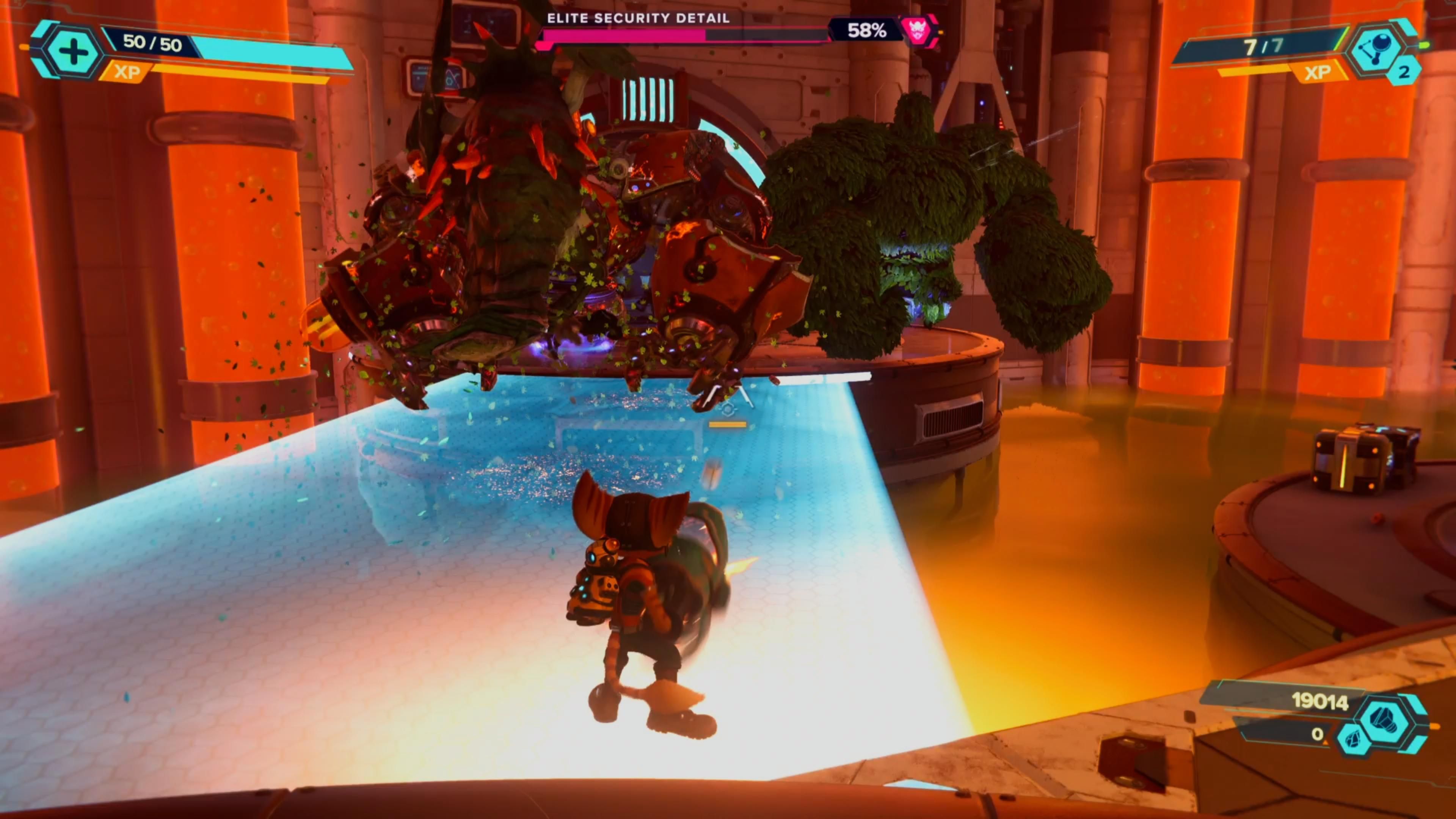 Once this wave is done, jump over to Juice as new bots emerge. Around halfway through the fight, two Nefarious Juggernauts will appear as the Elite Security Detail – Juice will help fight them, but you should still use heavy weapons to wear them down.

Once they have been defeated, follow Juice. He’ll lead you to a crystal, and when you hit it, he will stay will you. Follow him upstairs to the Forge, where this dimension’s Juice is about to attack Junkbot. In a cutscene, the two Juices become friends, Junkbot is safe, the Forge is powered up, and you get the Dimensionator. Your work on Cordelion is now done. 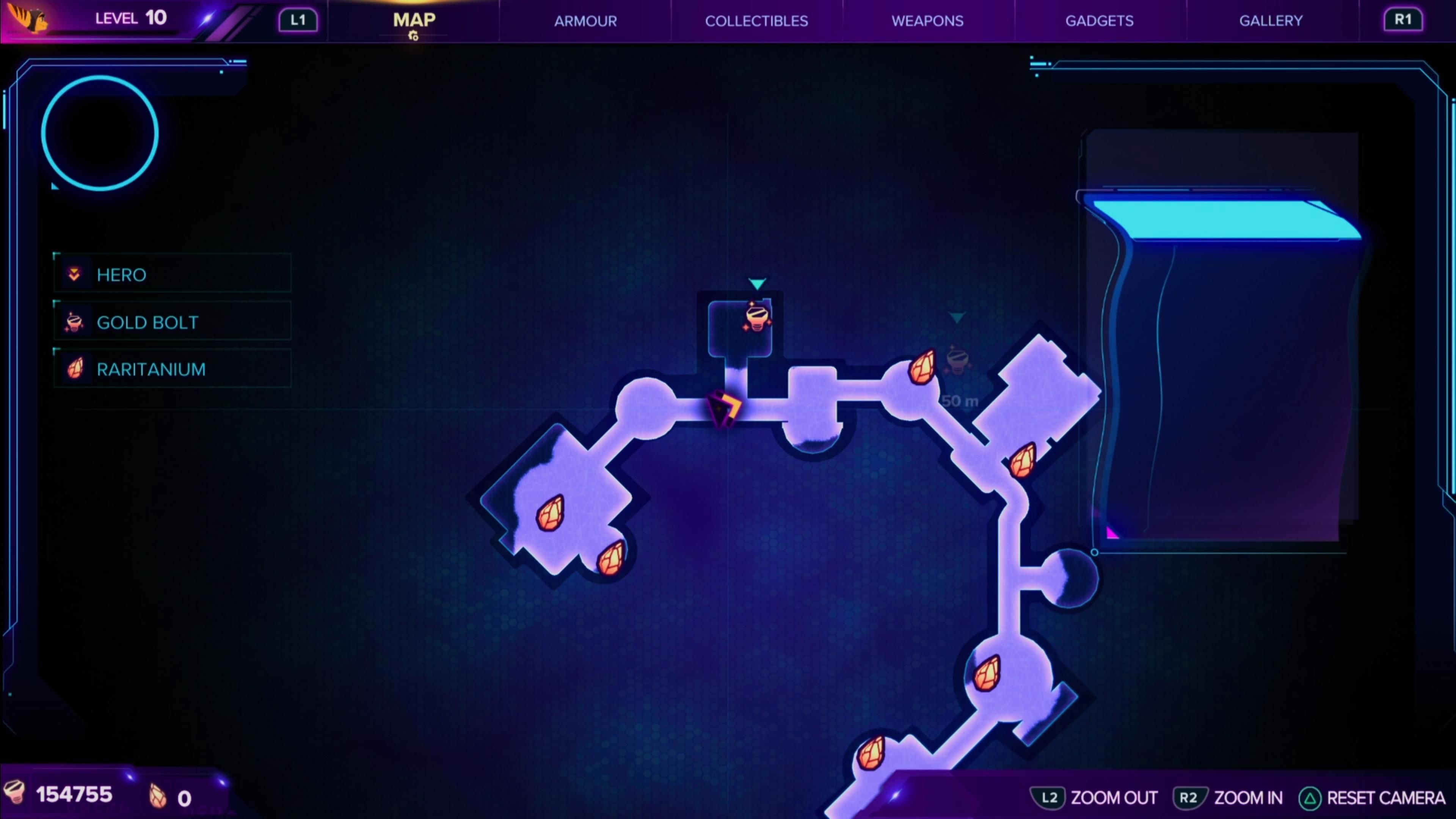 The third Golden Bolt is in a room with a broken door at this point on the map. You’ll need to rift through the door, grab the Golden Bolt, then blast it open.