You are here:
Home / Press X To Win: Video Game Boss Fights That Are Quick-Time Events

In the modern era, quick-time events (or QTEs for short) have developed a bit of a stigma. There are, of course, reasons for that. During the seventh generation of consoles, some felt that this mechanic was being leaned on a little too heavily. This sentiment was especially strong when it came to boss fights that were composed exclusively of QTEs.

However, while many of these failed to hit the mark, there were absolutely examples of quick-time event boss fights that proved to be exciting and enjoyable. No matter what your opinion, it is interesting to look back at some of the most notable boss fights that utilized this technology.

Yakuza 5's villain, Aizawa, is a pretty off-the-rails choice to begin with. The events that lead him to being the final fight in the game are convoluted and stretch the fabric of believability. Even more so than most Yakuza games (which is saying something). It is only suitable, then, that Aizawa also be a boss fight that is more QTE than real-time.

Of course, Yakuza is famous for incorporating a few quick-time event interludes in the middle of a fight. However, there are over half-a-dozen unique QTE segments during this fight. It is a lot. That isn't including any of the QTEs wedged in the middle of the heat actions you will almost certainly perform mid-combat, either. Some of the quick-time sequences are shockingly long, too.

Ultimately, it isn't an awful use of QTEs, there is one clever use that helps you transition to a new arena, but it does feel a little excessive. This fight may not be composed solely of quick-time events, but it is such an outlier in the series that it needs to be mentioned.

It would be unfair to say that the entire Arkham Origins fight is nothing but quick-time events. That isn't true. Only about three-quarters of it is. When you confront Slade you have an epic one-on-one showdown. Or at least that is what the screen shows – you just hit him with a few attacks and then press mash the button that flashes on the screen. The amount of time you see the word "counter" pop up during this fight is legitimately embarrassing.

This was a tactic that developers would use to try to depict a more cinematic fight, but gamers were already starting to voice their annoyance at this kind of encounter. Unfortunately, that cinematic element comes at the cost of enjoyable gameplay. Or at least it did here. 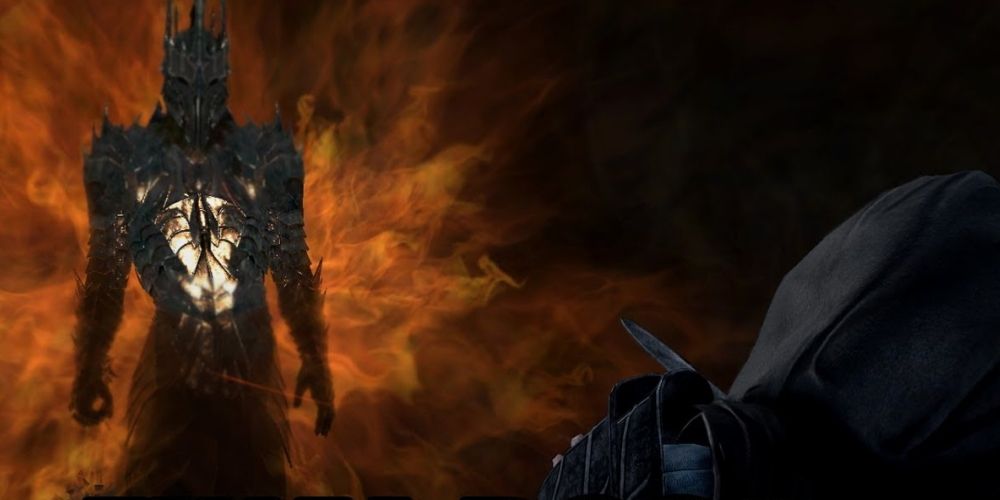 The fight against Sauron in Shadow of Mordor is underwhelming. It's almost as if this final battle was an afterthought. There are a grand total of five button prompts that require pressing (okay, two of them require dragging the analog stick across a line).

The scene itself only takes a half minute or so to complete and it all just feels a little rushed. This final encounter would have been better off with a simple cutscene in its place. Ultimately, this is not the conclusion that most gamers were likely looking for in an otherwise excellent game.

There are varying opinions on the Crocodile encounter redesign for the Resident Evil 2 Remake. However, if fans of the original are being honest with themselves, the original fight wasn't particularly interesting. It isn't hard to understand why the development team decided to punch it up a little. As far as quick-time event boss encounters go, this isn't a bad one.

The Crocodile telegraphs what they are about to do, which helps you accurately anticipate which side of the screen to be on. It is more involved than a number of traditional quick-time events and it doesn't feel random or unfair.

Since there are no button prompts, some will say that this is not a QTE. However, you need to be on the correct side of the screen or the crocodile will instantly kill you. It is fundamentally just a quick-time event where the prompts aren't on screen, you just need to read the Crocodile's movements accurately and mvoe left or right. It feels like a very intelligent repurposing of the QTE format.

One of the primary issues with the quick-time event boss battle is that they remove the player's ability to interact with the game in a meaningful manner. It feels cheap to rip all of a game's mechanics away during a climactic battle. Asura's Wrath sidestepped this issue by basing the entire game around QTEs. The direct result was a game that was consistently, and stunningly, cinematic.

Fights like the one with Gongen Wyzen show how a QTE can be an effective means for conveying something that would be extraordinarily difficult, if not impossible, to convey with traditional styles of gameplay. There are people who will not take to Asura's Wrath, but it does a good job arguing for the legitimacy of its own existence.

It's hard not to be excited about the final confrontation with The Didact. He looks cool, and in a game that is about being a badass space marine, cool villains are only going to add to the experience. However, at the end of Halo 4, you don't get a fun confrontation with The Didact, you get a series of strung-together cutscenes that have button prompts associated with them.

But, even if we weren't completely in control, it is probably a visual spectacle, right? Well, unless you are thrilled to be prompted to "use L to crawl" then we have some bad news for you…

This is another example of the idea in the developer’s head not being able to match the innate gameplay systems in the game itself. Here the finale of the game is a (not so) thrilling duel between Sly and Cyrille where the user's only task is to press the button that corresponds to the prompts which appear on the screen.

Worse yet, the prompts are extraordinarily forgiving and the sequence loops three times: making it both visually tedious and mechanically uninteresting. It is a shame that the last Sly Cooper game we received had to end on such a disappointing note.

If you want to know why cinematic QTE boss battles became so big, there is a good chance that the knife fight with Krauser is the answer you're searching for. This fight is awesome.

Are the prompts brilliantly synced to the action on the screen? Not really. Is the timing brutal and will you have to repeat this sequence multiple times? Absolutely. Is it still really cool? It most certainly is. Resident Evil 4 doesn't have a combat engine like Devil May Cry's, so it had no other way to depict this epic knife duel. This is a sharp scene that has a point.

In all the ways that the beautifully choreographed knife fight in Resident Evil 4 argues for the legitimacy of QTEs, the awkward machete fight finale in Dying Light argues that we are better off without them. Once again, a game that champions the idea of player freedom chose to strip it away, and to disastrous effect.

It is hard to understand why the developers thought this was the way they should conclude their game, but it is safe to say that whatever their motivations, they were mistaken.

There are many things that were done wrong in The Order 1886. However, one thing it got shockingly right is the QTE battle against Alastair. This is one of the best, most interesting, cinematic quick-time event finales found in a game.

The way the prompts seamlessly match the action happening on screen makes it feel more responsive and immediate than your typical example of this implementation. This type of cinematic, prompt-based encounter has largely been rejected by gamers. And for good reason. However, if there was ever an argument for their viability, it was here: the Alastair fight in The Order 1886.