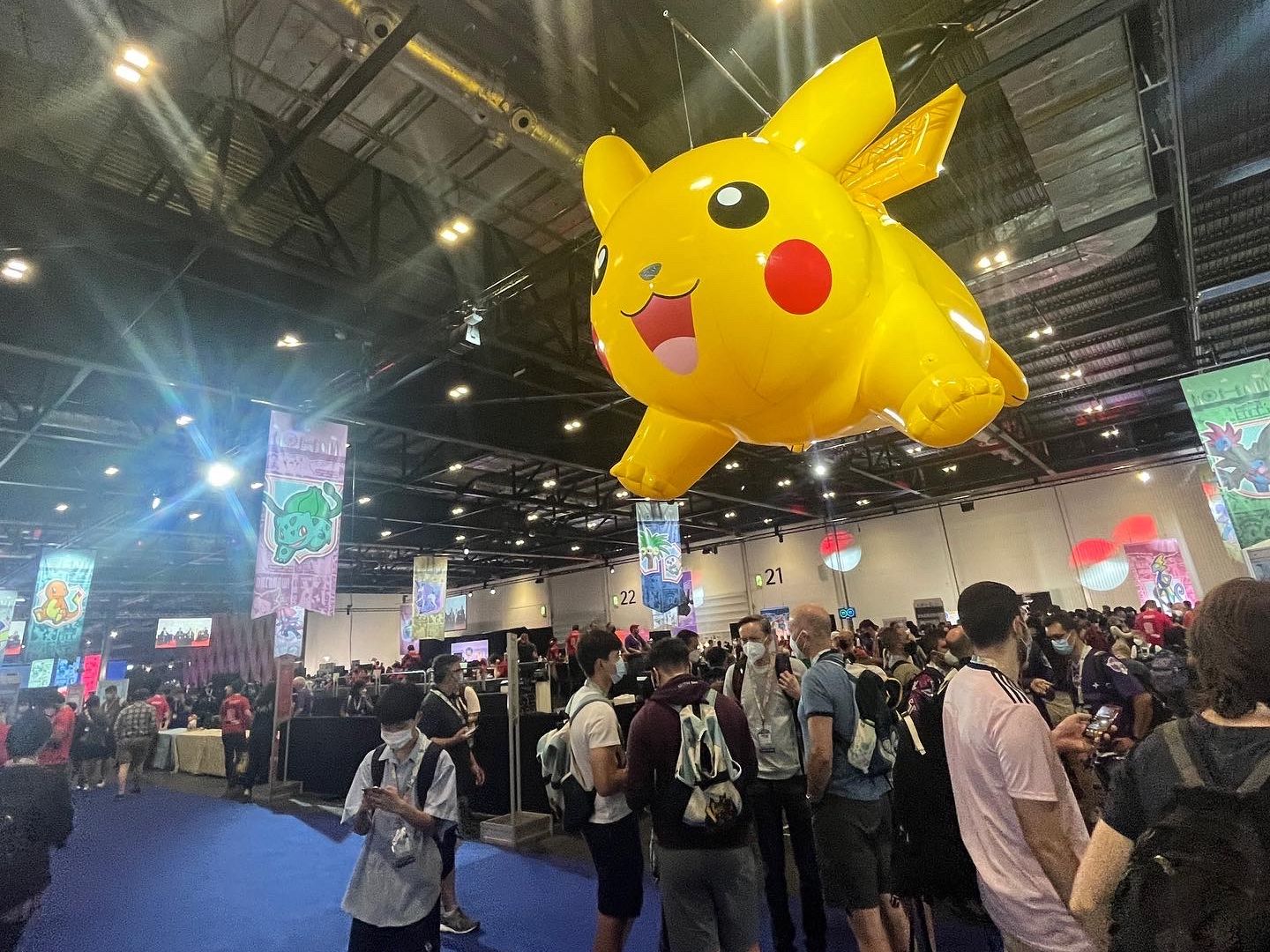 GameCentral reports back from the Pokémon World Championships 2022 in London and a weekend of intense shopping and fan celebration.

This weekend the buzz in the ExCel Arena was strong enough to power an electric pokémon. The Pokémon World Championships first began in 2004 and focused primarily on the Pokémon Trading Card Game, but it has since grown to include dedicated competitions for the mainline video games of the franchise. After three years on hold, this year finally saw players compete face-to-face again, in the first Pokémon World Championships event ever to be held in Europe.

Pokémon not only enveloped the whole of ExCel London but swathes of the surrounding area, as Transport for London fully embraced the franchise with Emirates Royal Docks Pokémon cable cars spotlighting 18 types of pokémon, as well as themed advertising posters and lifts in the connecting stations. Watching Ghastly swoop past the O2 and over the Thames was a sight to see.

Wednesday saw huge crowds in ExCel but they weren’t there for the Championships, which hadn’t even started yet, they were queueing for a coveted slot at the Pokémon Centre pop-up store. The biggest store of its kind so far, it was full to the brim with exclusive Pokémon World Championships merchandise – including the Pikachu and Roserade 2022 Pokémon World Championships plush dolls dressed in a Beefeater outfits and two exclusive London themed coin sets. I couldn’t resist and ended up with a Beefeater Pikachu Bear Walker skateboard and an oversized plush version of Farfetch’d’s leek.

During the opening ceremony on Thursday morning, President and CEO of The Pokémon Company, Tsunekazu Ishihara, welcomed players and shared special news about mobile games Pokémon Masters EX and Pokémon Unite, fans whooped and cheered in a hall awash with the red glow of a life-size, light up double decker bus.

Then it was time for pairings, as top Pokémon players got set to play the Pokémon Sword and Shield video games, the Pokémon Trading Card Game (TCG), Pokkén Tournament DX, Pokémon Unite, and Pokémon Go for the title of World Champion and a prize pool of more than £1,000,000.

In order to qualify for the Pokémon TCG World Championships, a player had to earn an invitation by gaining enough Championship Points by the end of the competitive season from playing local Pokémon tournaments. Hundreds of players, who had no doubt spent the last few months perfecting their decks, competed during the first day and players who finished with six wins, by playing best two out of three games, moved on to the second day of the Championships.

I spoke to Asha Cherian, 11, who had travelled all the way from Los Angeles to play in the junior TCG Championships: ‘The toughest part was probably playing against Japanese players. You have to call the translator a lot, which can take a long time, but it didn’t get boring. It was very interesting. I had a match where I lost but the other player came back with a business card afterwards and it had his online username for if I ever wanted to practice, I think that was really interesting. When I lost to another player, he gave me an origami crane which was very respectful.

It’s great that they have side events that are for if you don’t make it into the next day, so you can still get tickets to get prizes. There’s also Video Game Championship stuff, which is like Nintendo Switch games or Pokémon Sword and Shield, which I played where you level up as team in 30 minutes and then you play against everyone on your table. I did pretty well and tied in first place.’

After playing a preview of the new Pokémon TCG expansion, Sword & Shield – Lost Origin, based on the video game Pokémon Legends: Arceus, I was excited to pull out a Radiant (shiny) Steelix from a booster pack, which no doubt helped secure my win during a press match – sorry LADbible! Sunday saw the final play out in grand style and Bidoof, the cute beaver pokémon, finally coming into his own to help Ondrej Skubal from the Czech Republic take home the TCG Championship prize of $25,000.

For those unable to get a spectator pass, and for who watching furious card shuffling and placement might not be a priority, there was plenty of other events to keep would-be Pokémon masters busy. ExCel was full of dedicated Pokémon Go stops, including Throne of Champions, Krabby Road, Flying Pikachu, and, of course, the Pokémon Centre had its own dedicated stop.

In the mobile game you could spin these stops for special Field Research tasks, that give players the chance to catch a shiny Beefeater Pikachu, and in-game gifts such as an event T-shirt and unique Championship postcards that can be sent to friends or stored in a virtual album.

If you brought along your Nintendo Switch with a copy of Pokémon Sword or Pokémon Shield you could visit a booth to receive a special Sinistea teacup pokémon holding a Moomoo Milk, which could also use the unique event exclusive move Celebrate move.

Even if you couldn’t make it down to London there was still the chance for online viewers to receive the fiery Mythical Victory pokémon, Victini, by catching the livestream on Twitch. Eduardo ‘EmbC’ Cunha, a Portuguese Pokémon player, became the new Masters Division Champion, playing what will be Sword and Shield’s only appearance in the Video Game Championships and took home a nifty $10,000 in prize money.

Pokémon free-to-play MOBA Unite celebrated its first anniversary with a bang during the Championships, with the esports final for the game taking place on Saturday night. In the end, New York based team, BLVKHVND (Blackhand) had the honour of being the first team ever to hold the Pokémon Unite World Champions Pikachu trophy.

The impressive scale of the 2022 Pokémon World Championships seemed fitting for a franchise that continues to go from strength to strength, especially as a few years ago an event such as this might only have appealed to those committed to playing the card game competitively. This year though The Pokémon Company made sure everyone was a winner, at this inclusive and accessible event.

As the new champions left the stage at ExCel, details of the 2023 Pokémon World Championships, to be held in Yokohama, Japan, were confirmed, which will see the Pokémon Video Game Championships (VGC) events shifting from Sword and Shield to the new games Pokémon Scarlet and Pokémon Violet, to be released in November this year.

After five days of non-stop Pokémon action (and shopping) the world’s obsessive relationship with the Pocket Monsters has clearly never been stronger. Keep training and who knows, Special Delivery Charizard might drop out of the sky with an invitation for you, to next year’s Championship.