You are here:
Home / PlateUp! Does The Restraunt Party Game Better Than Overcooked

PlateUp! Does The Restraunt Party Game Better Than Overcooked

As far as party games go, Overcooked always seems like a better idea than it actually is. It certainly has party game vibes. The controls are simple and intuitive, there are no cutscenes or story for people to follow, and it has great, chaotic energy. I’ve busted out Overcooked at a number of parties, and unfortunately, I always have the same, disastrous result. Everyone gets excited to play, we load up the first level, and then all the non-gamers totally bomb, get mad, and quit playing.

Overcooked is a silly little game about operating a restaurant on a moving truck, a pirate ship, and a sinking iceberg, but it’s not as playful and casual as it appears. It takes no time at all for Overcooked to become a technically demanding and extremely punishing game. Every time I’ve tried to introduce it to casual gamers or friends and family that don’t play games, they’ve had a miserable time. It’s funny when the oven gets set on fire and everyone is running around like mad, but that’s only good for a quick laugh. Even people who don’t typically game want to feel skillful and celebrate a win, and Overcooked is a bit too hardcore for its own good.

Earlier this year, Yogscast Games took a stab at the action-cooking genre with PlateUp! and managed to overcome many of Overcooked’s critical flaws. PlateUp! tones down a lot of the chaos of Overcooked in favor of a more management-sim approach, but still maintains the energy and excitement of surviving a dinner rush that Overcooked is known for.

The layout and controls are identical – a smart choice for PlateUp!, which doesn’t try to reinvent the things that work about Overcooked. Up to four players run around a kitchen and dining room, making food, serving patrons, and cleaning up after them. There’s no wacky settings like volcanos or waterfalls though. It’s just a normal restaurant – but it’s your restaurant. 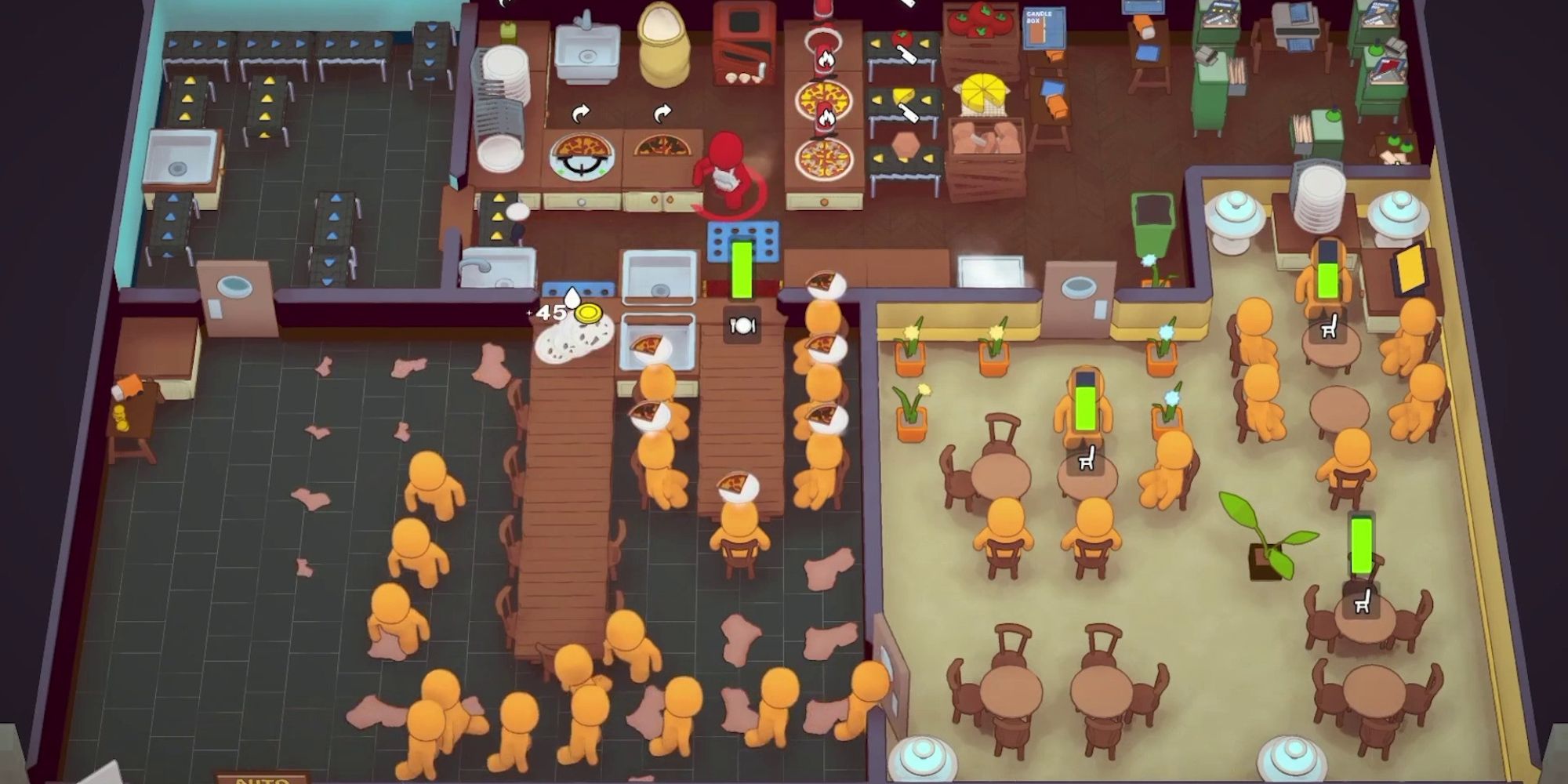 PlateUp! takes a roguelike approach that has you designing and upgrading your restaurant between rounds. If you ever fail to serve just a single guest their meal you will be forced to start over at the beginning (though there are many different kinds of restaurants, so starting over never feels repetitive) but as long as you’re keeping up with orders, you can continue to grow and improve your restaurant forever.

After every round, your party has the opportunity to change the layout, buy new restaurant equipment, and expand the menu to make gameplay more challenging, but more rewarding. As you progress, you’ll have opportunities to make important decisions about your restaurant. Is it a casual diner, or an upscale eatery? Is it an exclusive place that people will wait a long time to get into, or will you try to fit as many tables as possible inside to maximize profit? The kind of restaurant you choose to make impacts your menu items and decor, and can affect how your customers behave too. Making these decisions together with your group and seeing the effects immediately gives everyone a lot more investment in the success of the restaurant. It’s fun to have a sense of ownership because it makes winning feel so much more important.

PlateUp! is also more role-focused than Overcooked. Since you’re only dealing with one space that changes gradually, it’s easier to assign everyone to a specific role that they can learn to master over time. Whether you're the waiter, the cook, the dishwasher, or some combination of the three, you’ll have opportunities to invest in upgrades and make decisions about the way your restaurant changes every round. Everyone gets to have a say, thanks to a voting system, meaning there’s very little room for quarterbacking – unlike Overcooked, which practically requires someone to take the lead.

The response to PlateUp! from my friends has been night-and-day compared to Overcooked. People only want to play a few rounds of Overcooked before they get frustrated or bored, but in PlateUp! they want to keep going to see how long they can keep the restaurant alive. The investment that comes from upgrading and improving a single restaurant overtime makes PlateUp! a far more rewarding experience, even in a casual party setting. Things can still get chaotic and out of control at times, but if you’re in mixed company and want to keep people engaged, I’d choose PlateUp! over Overcooked every time.