You are here:
Home / Persona 4 Golden: 10 Things We Wished We Knew Before Starting

Persona 4 Golden: 10 Things We Wished We Knew Before Starting

Launching four years after the original game to add some polish and pizzazz, Persona 4 Golden introduced a lot of interesting content to the already captivating fourth installment in the Persona series. If you played the original, then you know exactly what’s different, but for those players experiencing the story of Persona 4 for the first time with Golden as Atlus broadens the list of platforms on which you can play it, they might not be so readily equipped for their time in Inaba.

If this is your first time following Yu as he makes friends, boosts his skills, and solves murders by diving into televisions, there are a few pro-tips you should know ahead of time. With the campaigns in Shin Megami Tensei games spanning dozens of hours, we’d like to give you a couple of ways to make sure you’re doing the most with this expanded catalog of characters, locations, and bonus content. 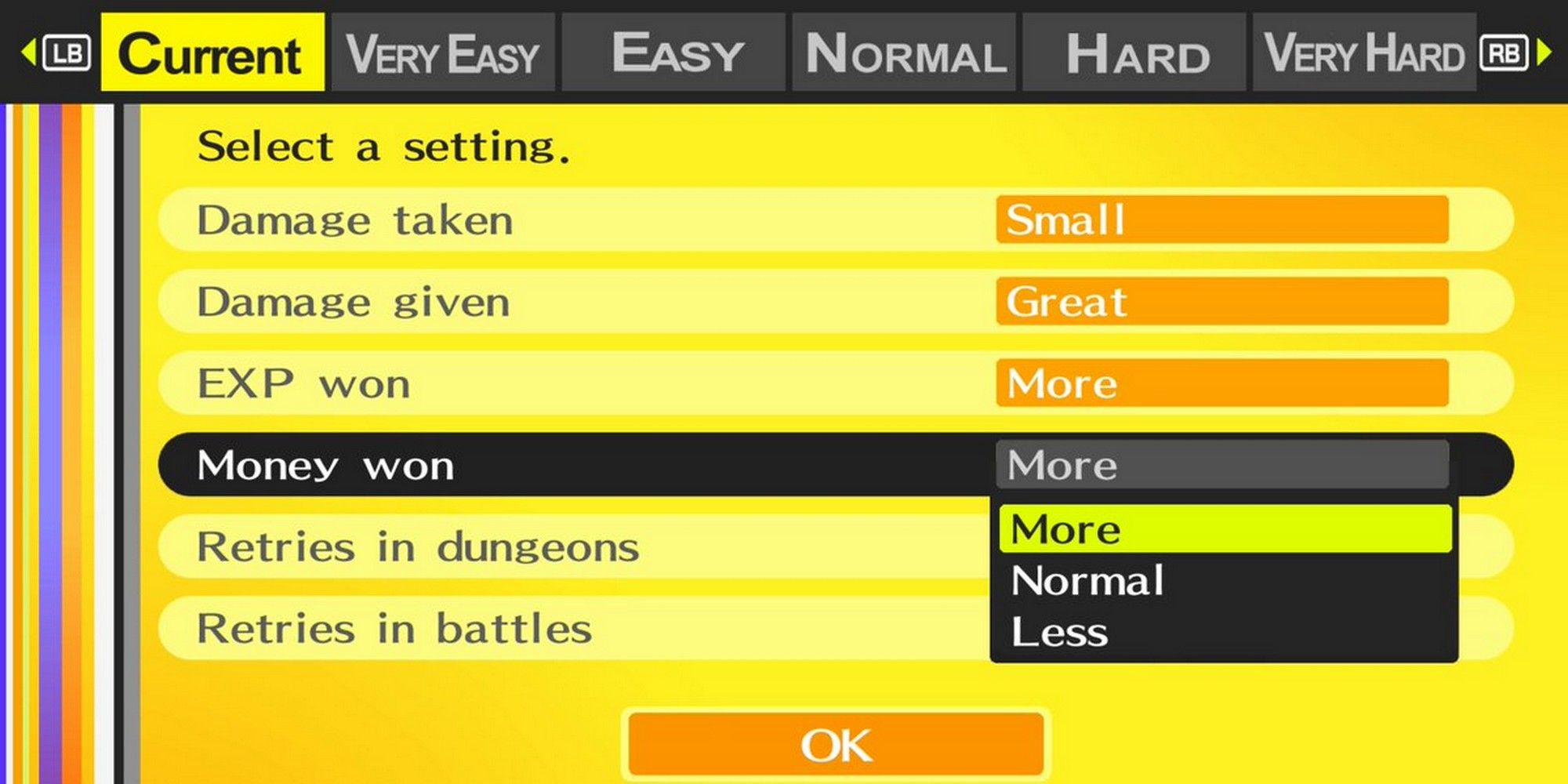 If this is your first time playing a Persona game, then you might not know just how much more complicated the battling mechanics get from the start. The game will ease you in, of course, but by the final dungeon, specialized enemies are going to be hitting harder than you expect.

And there’s no shame in simply enjoying the game for its story. The narrative is interesting and the characters are fun, so if playing on an easier mode is the best way for you to enjoy them, feel free. After all, you won’t make much progress if you’re constantly getting your ass kicked.

9 Guides: A Little Help From An Internet Friend 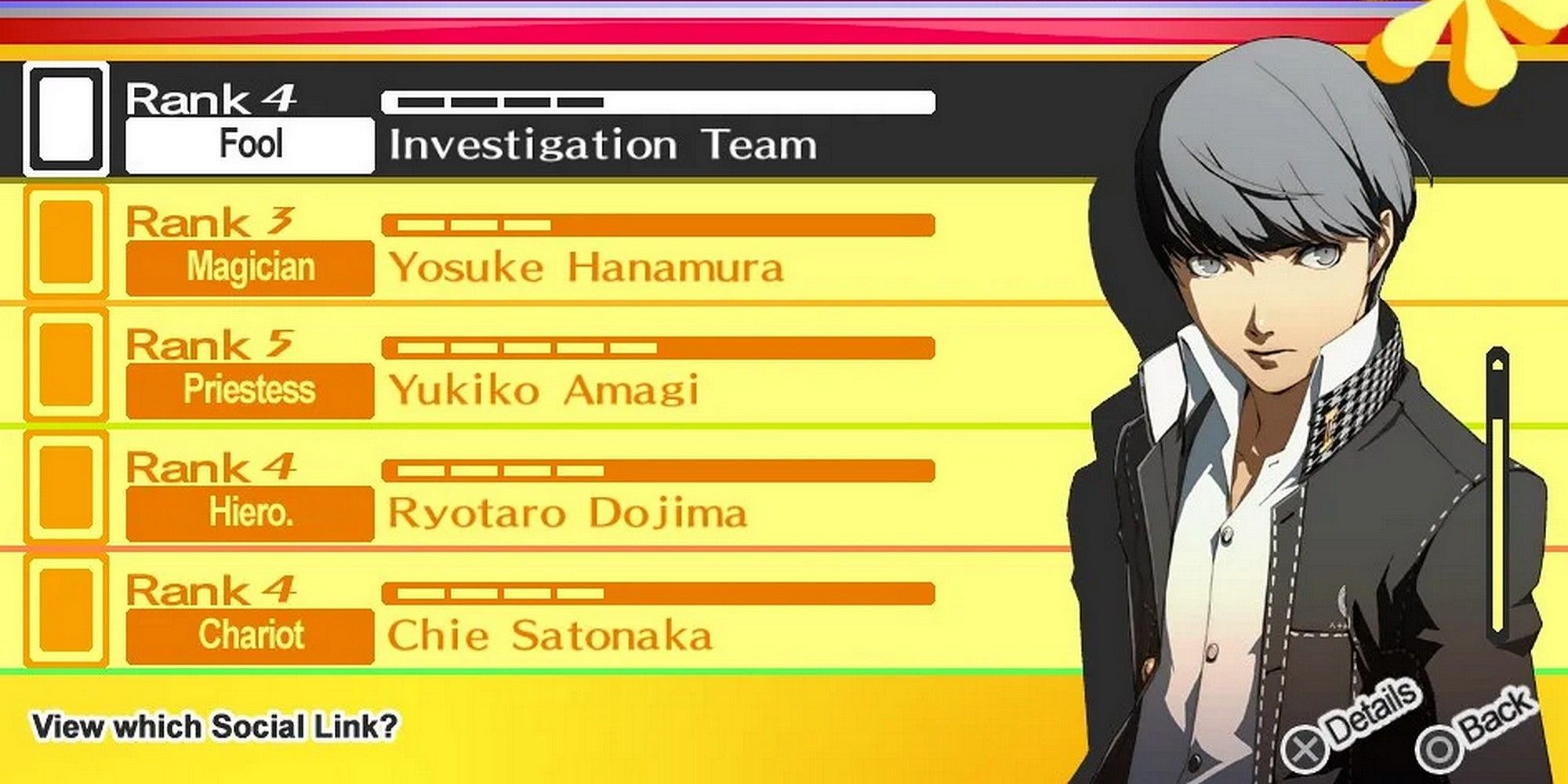 Make no mistake about it: there is a LOT to see, do, and experience in a Persona game. And if it’s the first time you’re playing, you might be overestimating exactly how much you can do each day.

With a story this long and full of winding paths that lead to different endings, there’s no shame in checking a guide every now and then. Certain characters have certain deadlines after which they become unavailable, and some abilities are better worked on during certain weathers. If you’re trying to make the most of your time in Inaba your first time through, it might make things easier on you to peek ahead to make sure you’re on schedule. 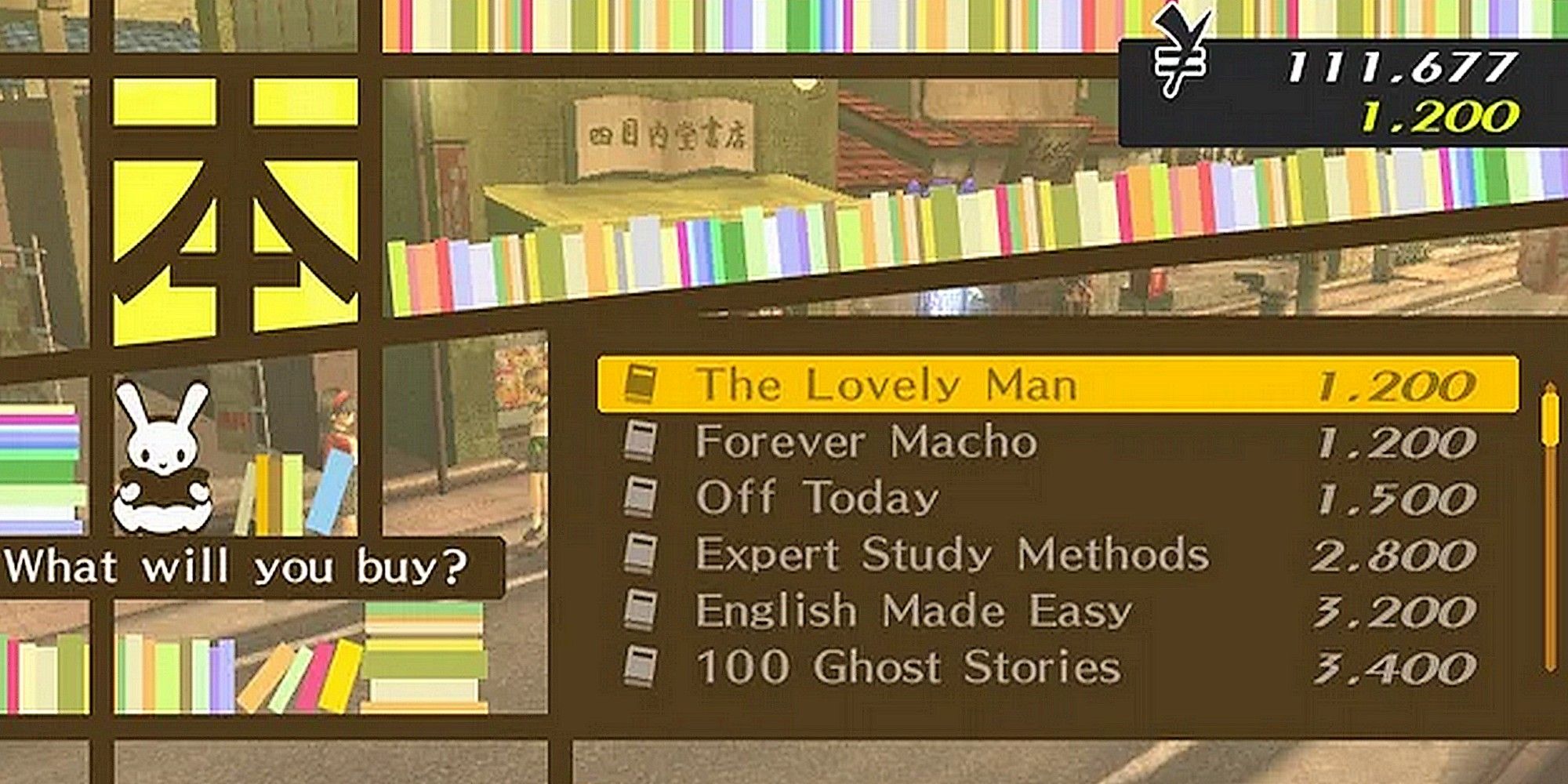 There are several books Yu can read, and the very first one we recommend is called “Expert Study Methods.” You can buy it on April 20th from the bookstore in the southern shopping district, and while you’ll have to read it three times to gain the full benefit, trust us – it’s worth it.

Finishing “Expert Study Methods” will increase the amount of knowledge you’ll earn each time you study. And given that you’ll be doing an awful lot of studying until the game starts to open into more free time options, it doesn’t hurt to get a boost.

7 Max Out The Fox's Social Link 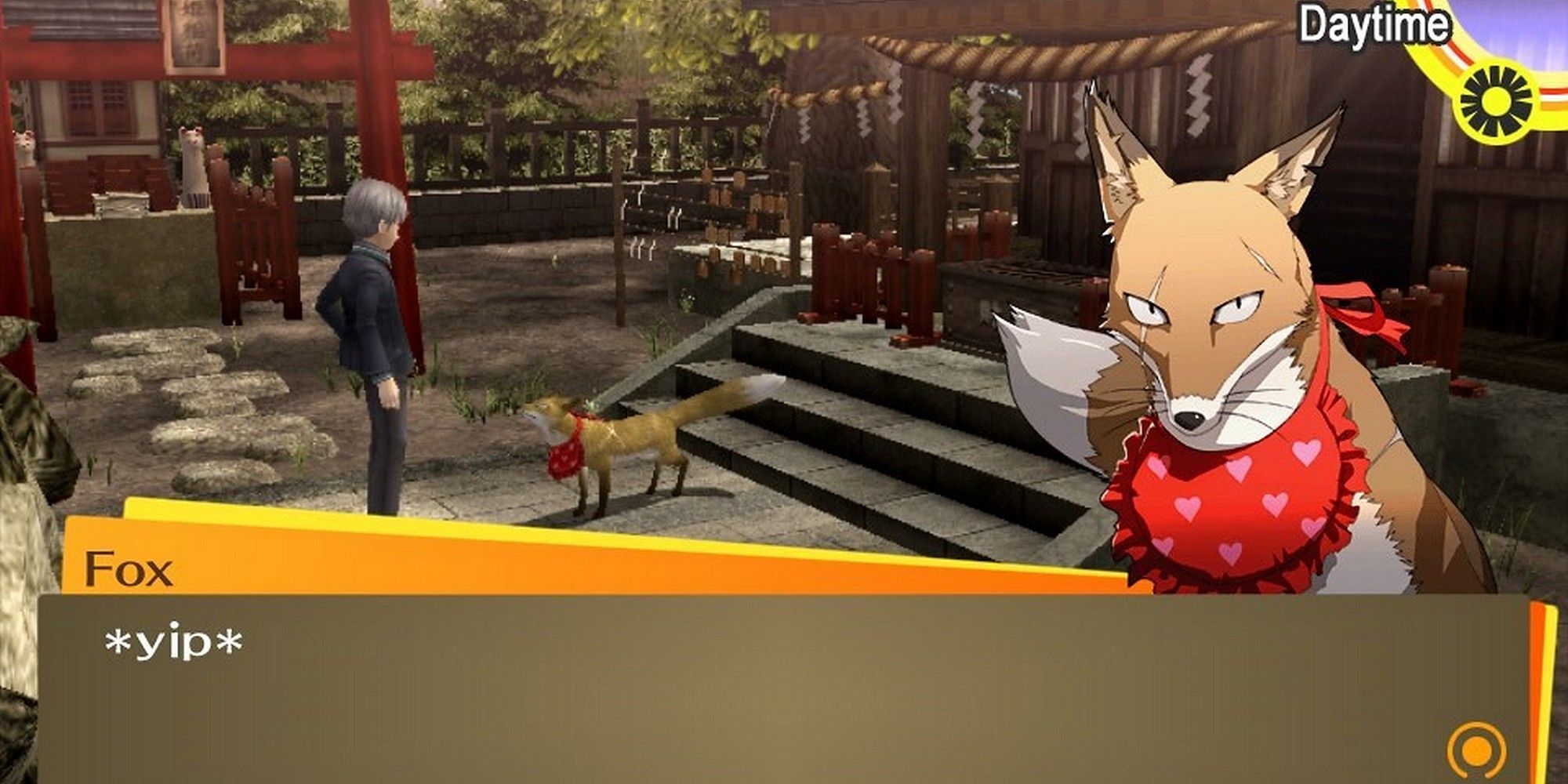 There are an awful lot of social links to pursue in this game, and we understand that the fox that gives you quests at the Tatsuhime Shrine in the Central Shopping District might not seem like the most exciting.

But it’s a rather worthwhile friend. It becomes an ally of sorts, able to heal your team’s SP, for a price. And for every level you increase its social link, the price decreases a bit. And by the final dungeon, when the going is tough and the enemies are tougher, you’ll be glad it’s on your side. 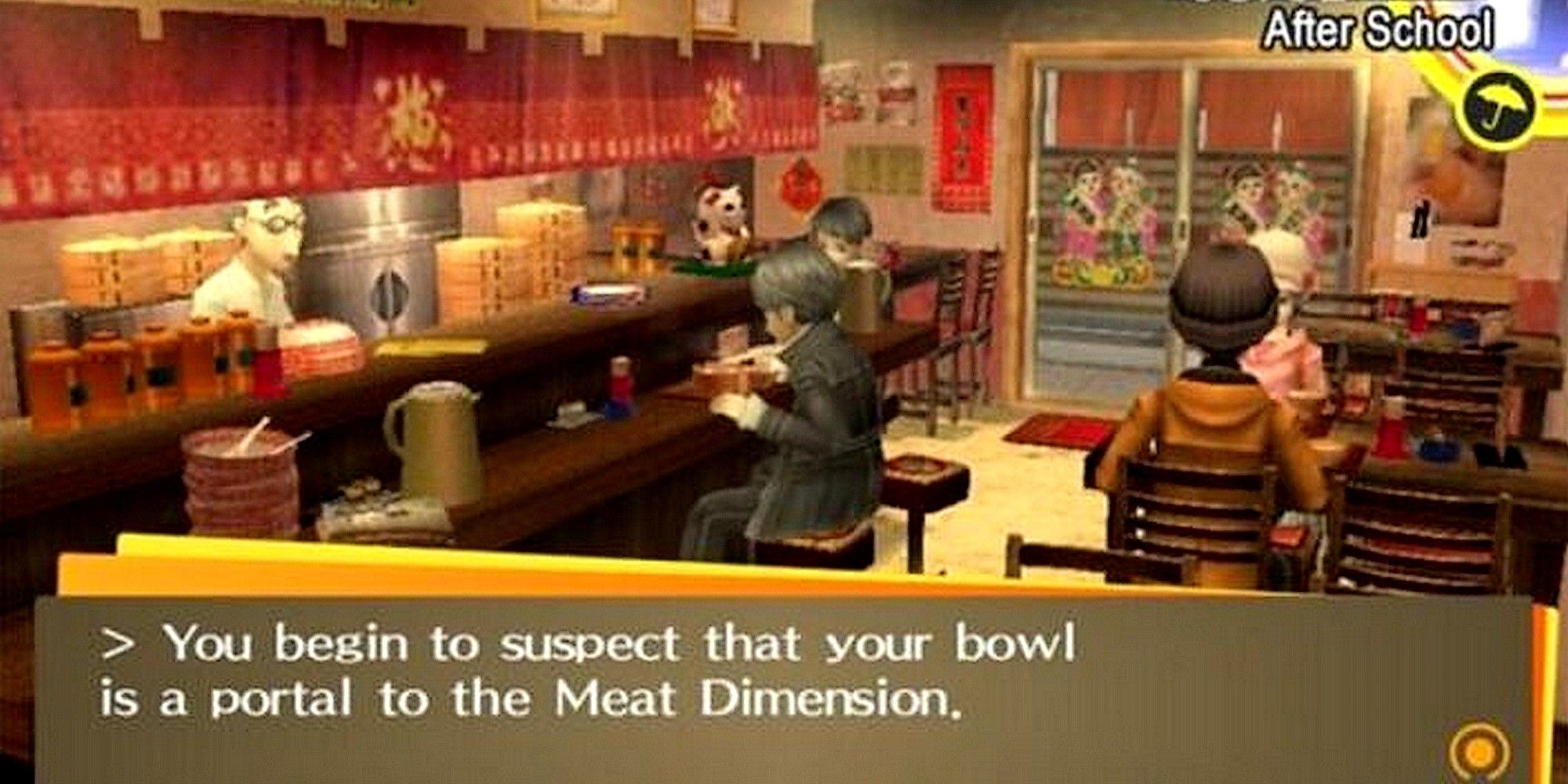 There are a lot of ways to increase your skills in this game that you might not expect your first time through, but the Mega Beef Bowl Challenge at Chinese Diner Aiya is a solid boost to several of them. It does cost ¥3,000 to even attempt, but you’ll get a boost to three random stats just for trying.

Another good thing to do on rainy days is going shopping. Most everything you’ve got stockpiled from dungeons can be sold, and certain shops like the Shiroku Store or Souzai Daigaku have discounts or limited-time items on rainy days. 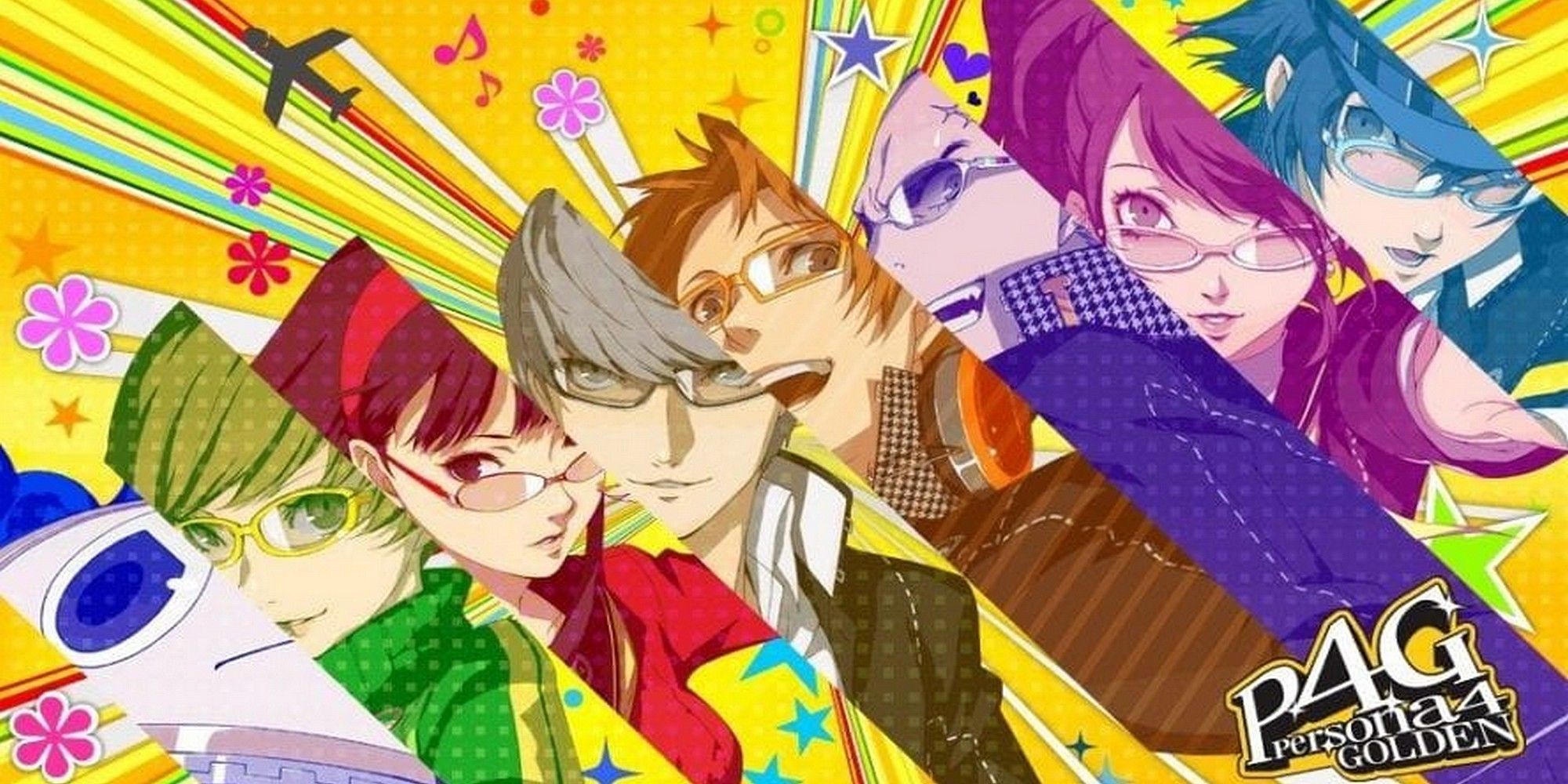 Not only are your party members some of the most fleshed-out of the social links, but giving them priority is a fantastic way for your friends to learn new skills for battle. Their Personas can even level into a final form if you max out their social link, becoming even more powerful than before.

The social links around town are fine, but they can’t offer direct support like the members of the Investigation Team. They can give items, sure, but the best way to help yourself in dungeons is making sure you’re close with your friends.

4 Fill Out Your Registry 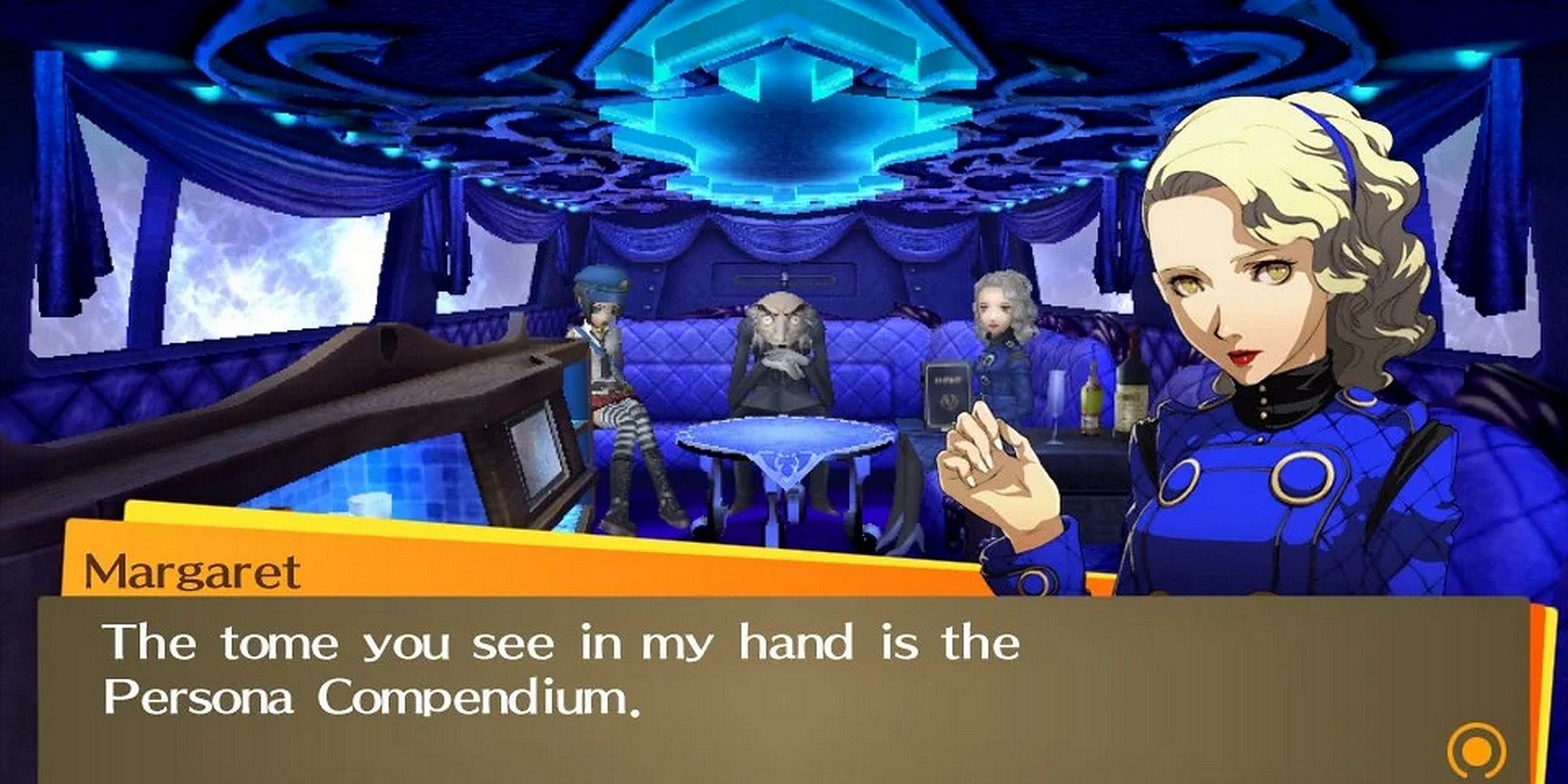 Registering new ones adds them to your compendium, and registering old ones whose moves or skills have changed will update their entry. When you get farther in the game and start fusing higher-level Personas, you’ll be glad to be able to purchase them instead of having to hunt them down a second time. 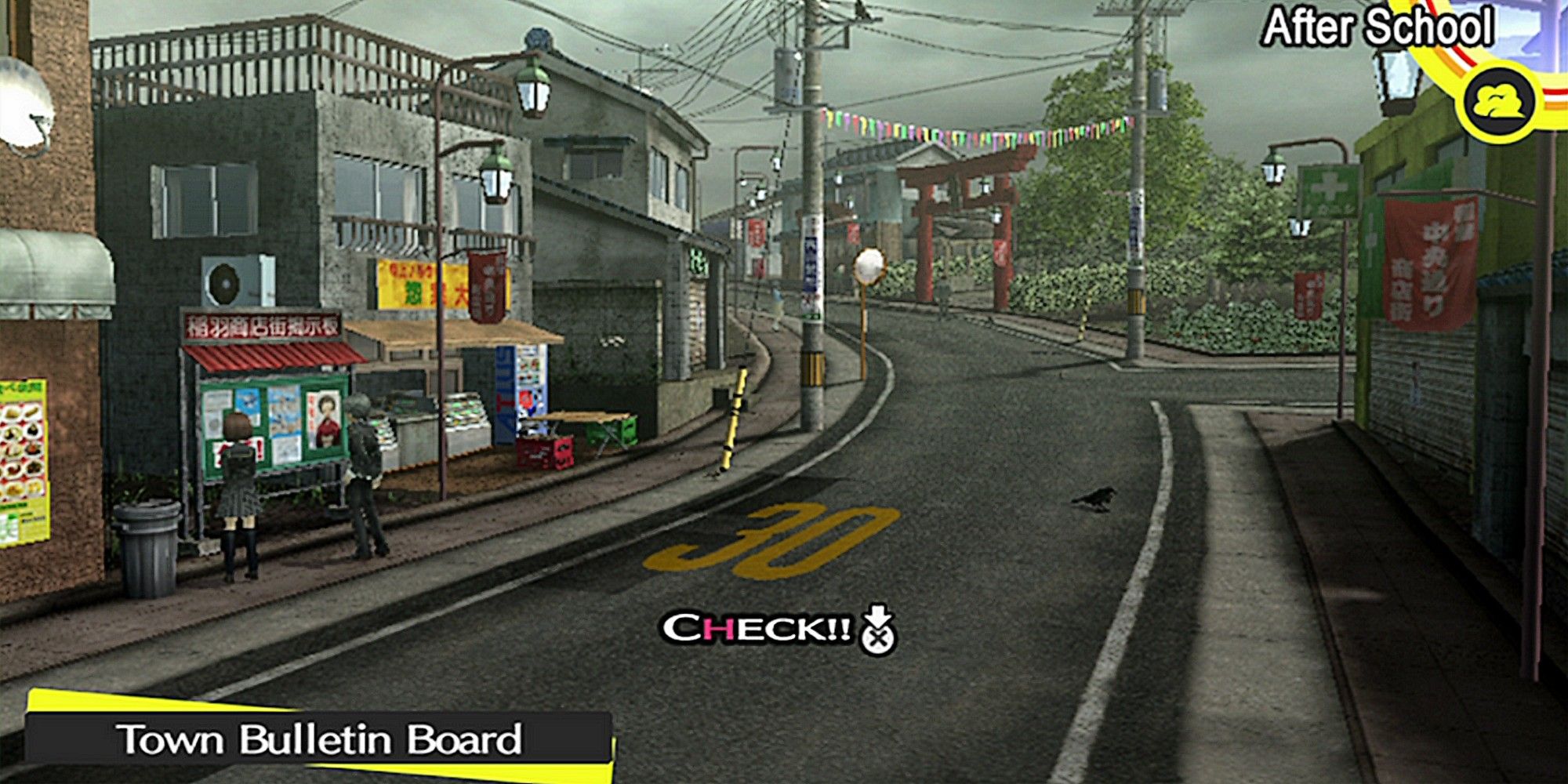 While the same can’t be said for all Persona games, in Persona 4 Golden, the part-time jobs you can find on the Town Bulletin Board really matter. Not only are they a great way to earn cash and skills, but they’re also the only time you’ll be able to interact with certain social links, too.

Three are locked behind the progression of your part-time work. If you’re looking for Temperance, you’ll find her at the Day Care. The nurse serving as the Devil link works at the hospital. Finally, your Tower link for this game is the boy that you can tutor.

2 Do Every Dungeon As Soon As You Can… 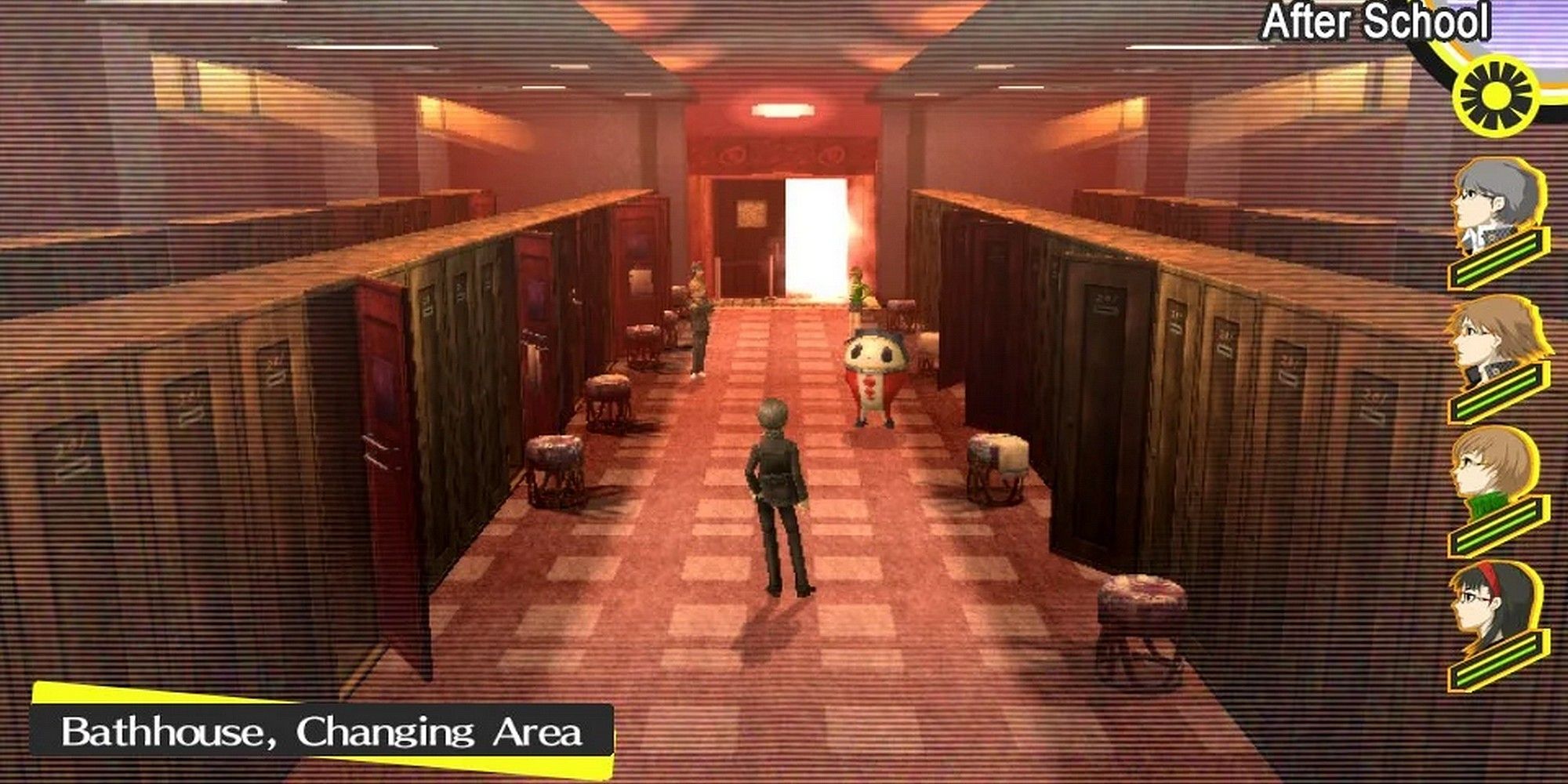 We’ve already mentioned the importance of becoming friends with the Investigation Team, but an excellent way to make sure you can do this is to beat each dungeon as soon as you can. The party members you’ve unlocked to that point will have extremely limited availability, what with the pressures of their upcoming task heavy on their minds. Because of this, they’re kind of tough to hang out with until you’ve finished the mission.

Doing dungeons early also means you’ve got ample time to work on other social links, skills, jobs, and hobbies before the story progresses. Life will be slow, for the most part, during an active mission, so finishing it sooner gives you that much more time to be a regular teen.

1 … All Of Them Except December's 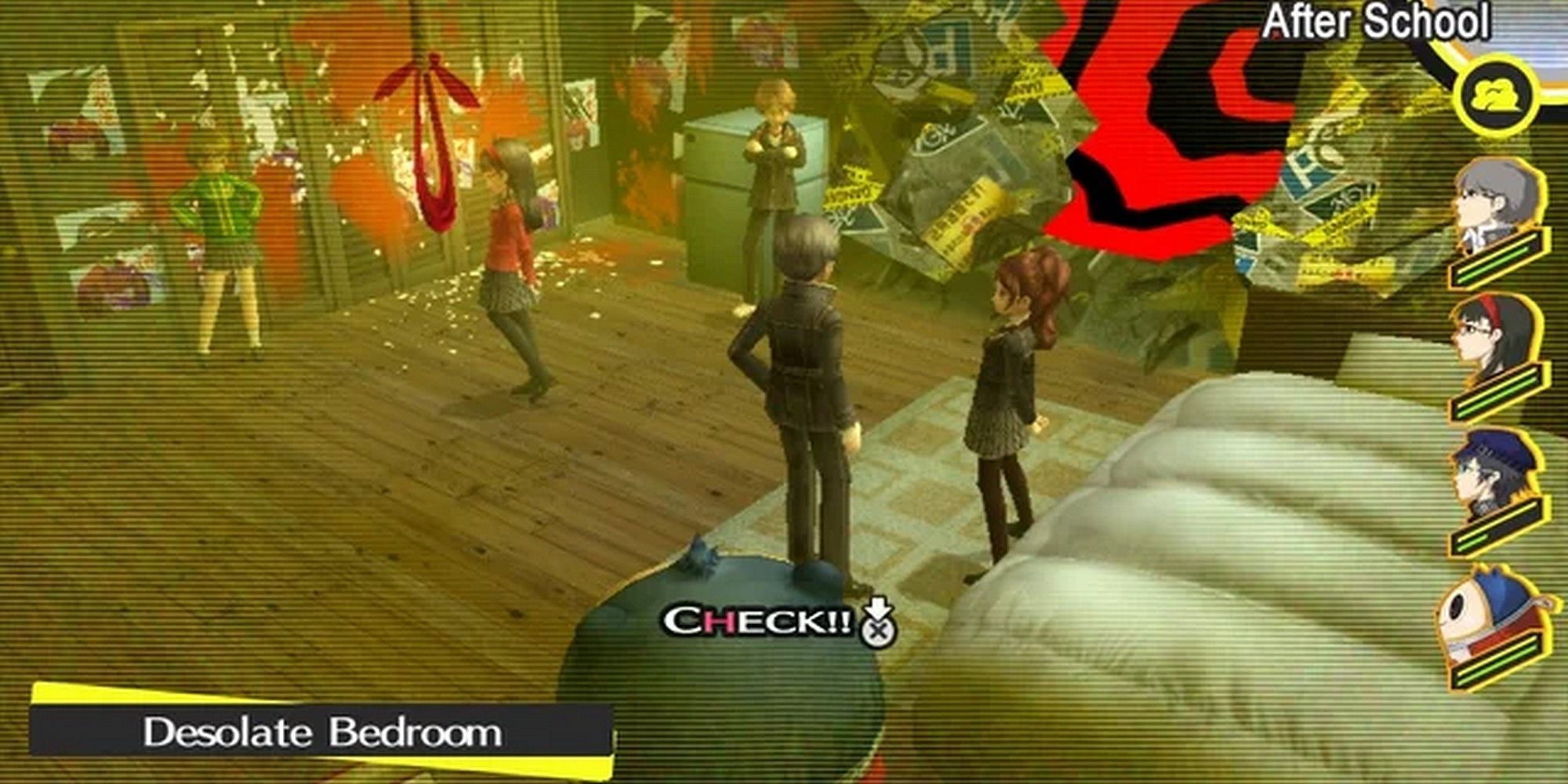 Okay, our last piece of advice does come with an asterisk at the end, because as soon as you finish beating the boss in the dungeon you’ll enter in December, the game fast-tracks you to the next story progression moment, which happens on December 23rd. From there, unless you’ve done everything required for the bonus content, your game is pretty much over.

As long as you finish the last dungeon by December 22nd, you’ll still be hitting the deadline, and that way, Yu only loses one single day. And with your access to all the bonus content added in Golden locked firmly behind the finishing of one of the social links, you’ll want the time you can get to make sure you’re on track for the ending you want. Don't get locked out of tying up your loose ends because you were eager to finish the dungeon.