You are here:
Home / Park Beyond Preview: Going Up And Up

Park Beyond Preview: Going Up And Up

Park Beyond is the latest game to tackle the theme park sim genre, blending classic construction and management elements with a new concept, Impossification. You’ll still be laying paths, building shops, designing rides, and appealing to visitors, but your park will go beyond what you’ve ever seen before.

At a recent event, held at Europa Park in Germany, I played the latest version of Park Beyond, which includes two full missions and a more developed sandbox, while speaking with Johannes Reithmann, creative director at Limbic.

The first thing that’s noticeable about this new build is that the intro has changed. Gone is the functional but bland corporate overview designed for the Gamescom demo, and in its place is a more vibrant and engaging opener that includes a chaotic introduction to Blaize, a fellow coaster designer. The rest of this first mission is the same, but it’s now followed by another that leads you to making your first management decisions. 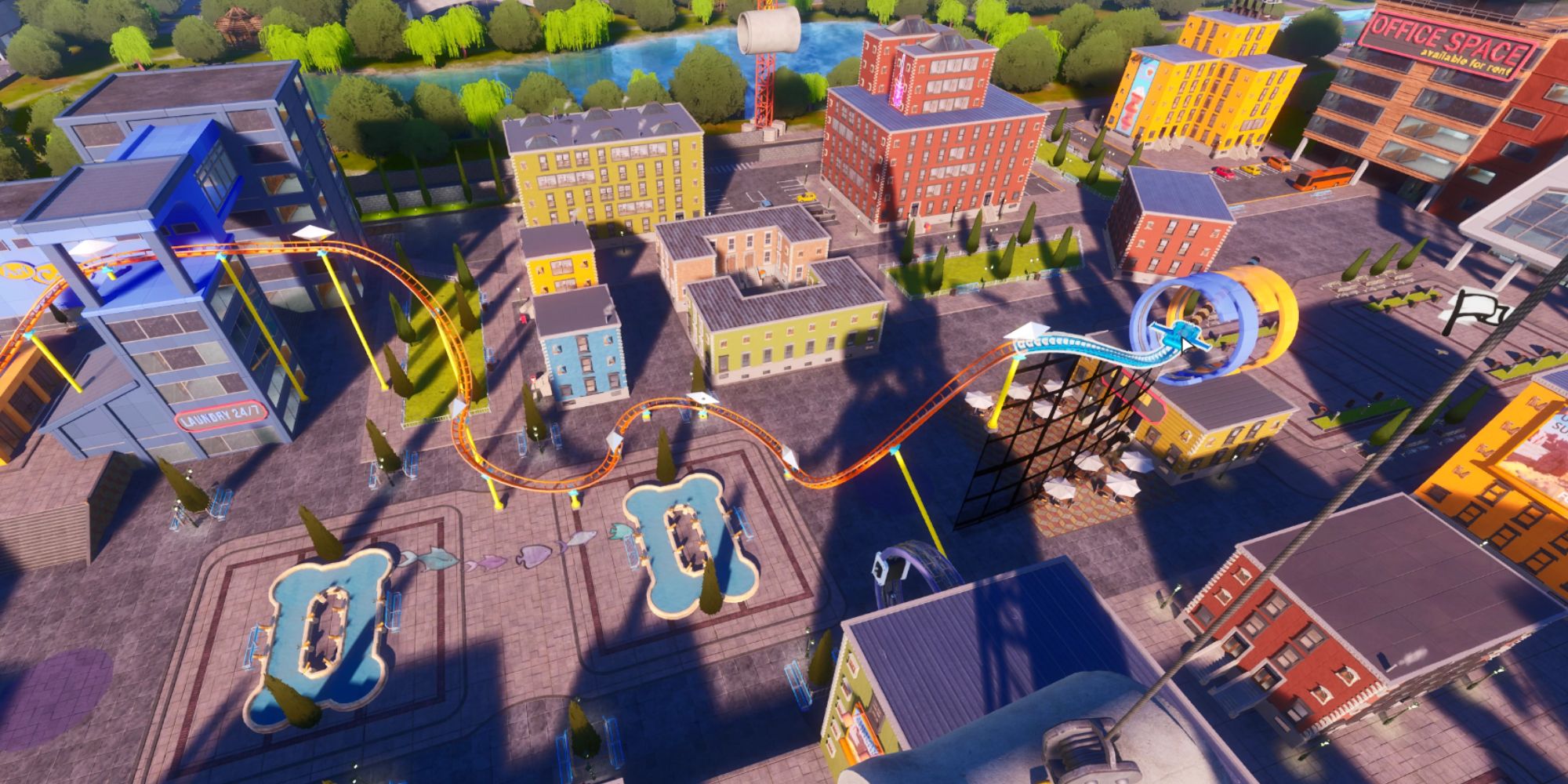 Something I’d not considered before is that Park Beyond throws you straight in at the deep end, although you won’t realise it at first. Instead of starting with the basics; like laying paths, placing some simple flat rides, and adding shops and toilets, you’ll be building a coaster. Not just any coaster either but one that throws cars over a ramp or shoots them out of a cannon, before burrowing through mountains that get in the way. This coaster will need to hit a number of set points, but how it gets there is entirely up to you.

Reithamn explains the design ideas behind the easy-to-use building tools, “We were very focused on being able to use the ride editor like a drawing board. You can place your nodes freely in the map with as few limitations as possible, giving players the maximum freedom to build their coaster the way they want to.”

This was very much the case, as once you’ve built the basic rollercoaster track, editing it is easy. Each piece you place can be changed individually, without needing to worry about it breaking anything else. The clickable nodes allow you to adjust the height, curvature, and type of track on each section independently. You can make larger adjustments, although you’ll most likely want to delete a couple of sections to do this, since neighbouring nodes can cause restrictions.

The only problem with this exciting intro is that the next mission falls a little flat. After building a coaster that swerves around your neighbourhood, looping through small gaps and climbing to the top of roofs, being asked to place a couple of flat rides and some shops feels like a bump back down to earth. So much so that I went back to the first mission, just to build another coaster around all those delicious obstacles. 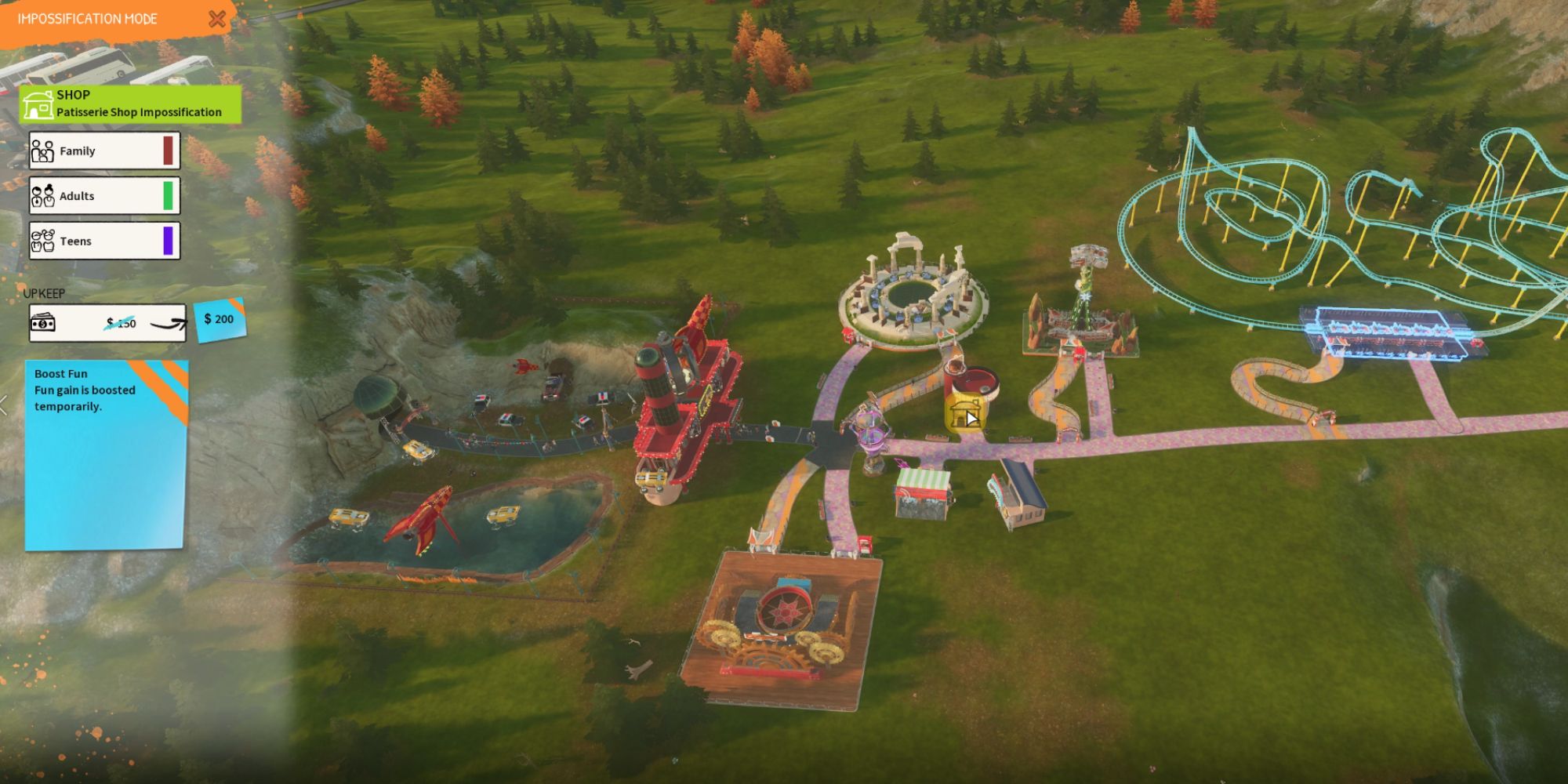 However, my coaster-building desires were somewhat sated again when entering sandbox mode. There are some notable improvements here and the research tree is also unlocked, allowing you to develop new ride ideas. Mostly it functions as you’d expect, and Reithmann assures us that this is just the beginning. “The sandbox mode is going to give players a bunch of maps, not just in one biome, but multiple biomes that they can build their park in. All of them coming with their unique foliage and unique terrain. All of the maps that we give to players are handcrafted. And of course, the player is also free to change them as they want with the tools that we give them.”

Theme park sim veterans will soon be able to tick off all the essentials. A range of rides – check. Paths with so many swatches you’ll never use them – check. Shops to part your guests from their cash – check. These are complemented by the usual range of scenery items you can’t quite identify, vending machines you’ll constantly have to restock, bins you’ll place everywhere, and benches you’ll forget to place entirely. However, they also come with the aforementioned Impossification factor.

At first glance, Impossification looks like a cheap gimmick. It takes a ride and makes it ‘extra’. You’ll increase the size of your rides, adding pizzazz, and some death-defying extras. Impossified rides are full of spectacle and sure to draw in a crowd. However, they also come with a challenge aspect that’s unexpected. 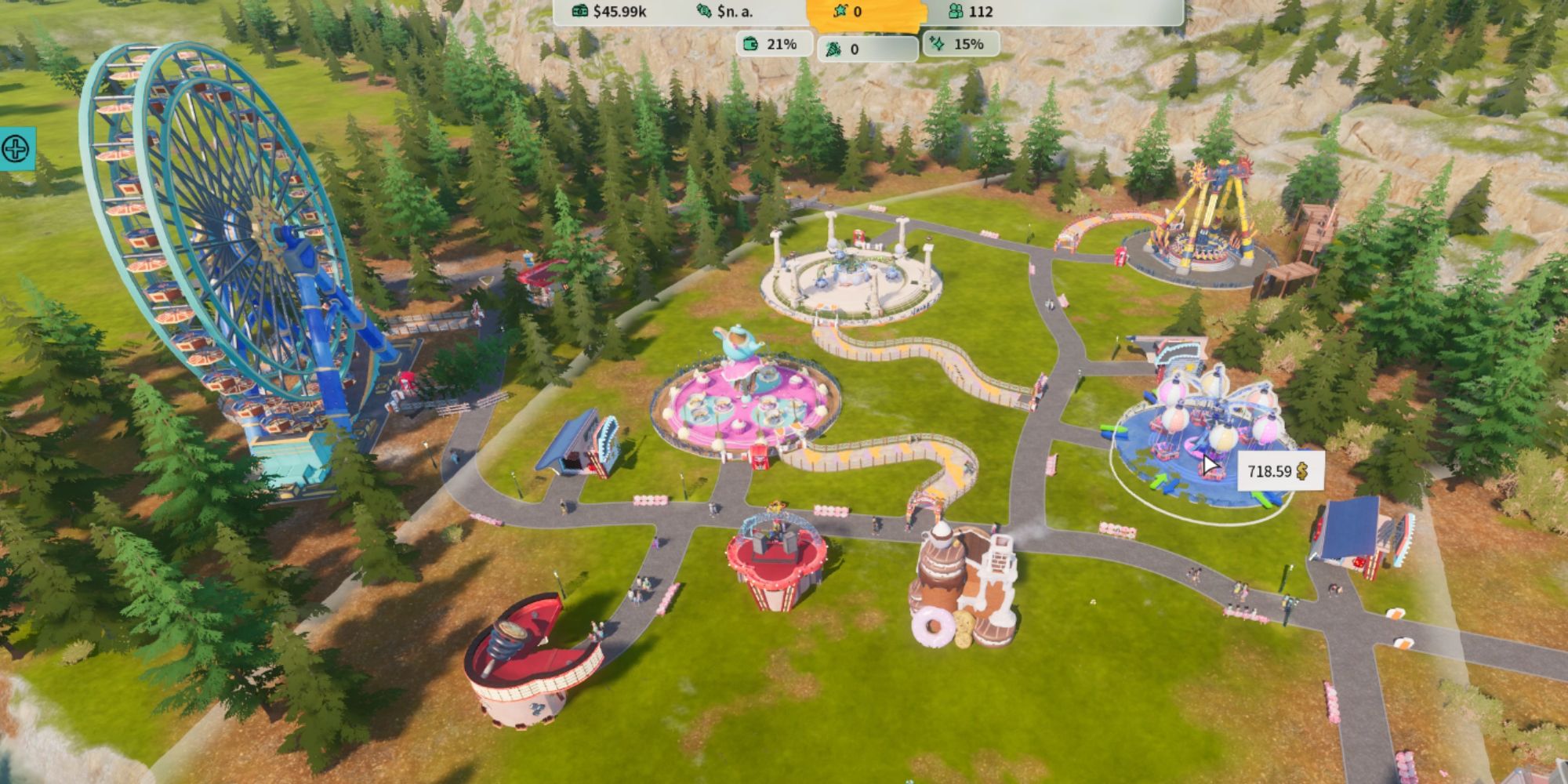 “Impossifying your park also comes with new management challenges,” Reithmann explains, “Your visitors will get euphoria, which is basically a sickness of being on Impossified rides too much, and you need to treat this. Your Impossified rides also have a bigger ride decline. But on the other hand, they also provide more amazement for your park, which lets you Impossify your park even further. So, there is a lot going into the management aspect of the game.”

In the brief time I explored Park Beyond, I was thankful that I didn’t have to go too deep into the micro-management and could focus on exploring the unique features and building tools, which are far more interesting to me, without having to worry about the price of ice cream. You can of course micro-manage everything, but going deep into the financials is entirely optional. I was able to build up a small park and turn a modest profit mostly from building, with just some simple adjustments to ride costs and staff. Micro-management does make you become more efficient but thankfully it’s not necessary.

I can see that Park Beyond still has a way to go, but it’s encouraging to see positive changes since the last time I got my hands on it. The coaster designer remains one of the easiest I’ve ever used, and there are some new and interesting ideas starting to appear in the gameplay. We may be waiting a little longer to jump into that coaster cam, but it looks set to be worth the wait.