Oxenfree 2: Lost Signals has been on my radar for a while now. I've played most of the Tribeca Games 2022 selection over the past few days, and Oxenfree (along with Cuphead, which is DLC to a game I've already beaten) was the game I went in knowing the most about. It's a sequel, sure, but it's more of a spiritual/thematic sequel than a direct continuation. I knew Oxenfree 2 well enough because a couple of months back I had a hands-off preview of the sequel that went through the same section I was able to go hands-on with here. At the time, I was intrigued but left wanting. It was missing something, even if I couldn't quite put my finger on it. At Tribeca, Oxenfree 2 found what it was searching for.

On a raw gameplay level, Oxenfree 2 doesn't have all that much going on. I wandered through a section of caves that felt either at or very near the start of the game, with simple tasks like 'climb a rope' or 'jump a ledge'. This was clearly a bit of a tutorial, and there was a puzzle to figure out at the end of the demo, but I'm not sure it will get that much more sophisticated. I don't think gameplay is really the point here though, so much as it is the vehicle for the story. It's on the narratives and characters that the game will live and die, and on that level Oxenfree's preview showed me a strong foundation, but also a couple of potential cracks.

Oxenfree is incredibly dialogue heavy. If you've played the first one, you'll know what I mean. You aren't just choosing responses, the way you might in a Telltale game or Life is Strange, you will select every single word protagonist Riley says. You're choosing the actual words too, not vague descriptions like 'be positive', so you feel in control of everything. This gives you a much more intimate connection to Riley than you might feel for other protagonists whose skin you merely inhabit to swing axes or shoot guns. However, it also means your enjoyment of the game is a lot more reliant on Riley herself. I liked my time with her, but she doesn't feel yet like a character for the history books, and it remains to be seen if she can carry the weight of the entire game, not just a 20 minute demo. 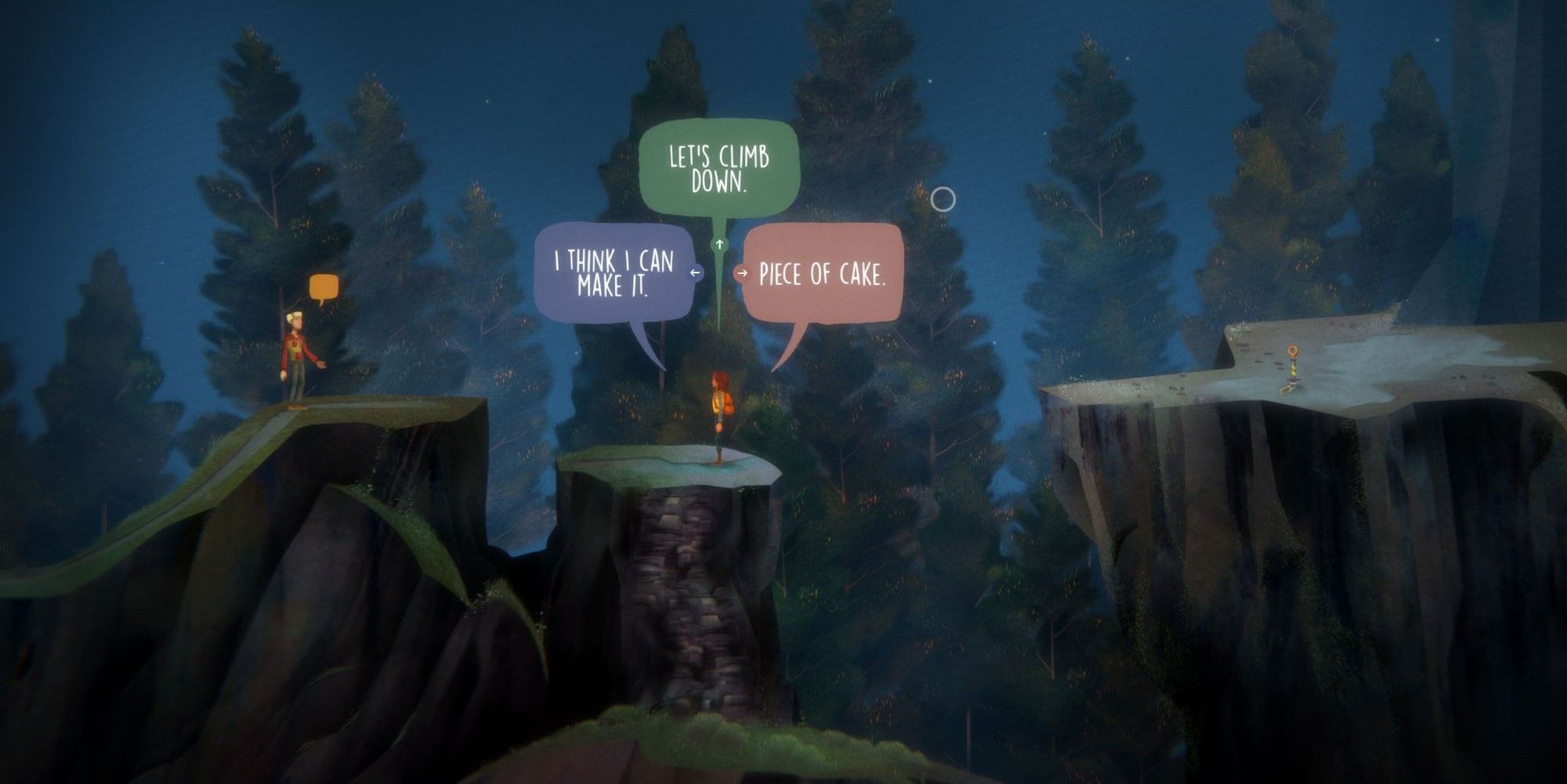 With Oxenfree's dark yet occasionally neon colour palette, magic realism, and foreboding synth-heavy tones, it conjures up a connection to Stranger Things. That makes the red-haired, smart, often sarcastic (at least in my hands), occasionally playful Riley our Max, with our weird, nerdy, awkward friend Jacob the Jonathan. Max and Jonathan make for an odd team-up, and even without me hearing darker '80s music and pointing at the screen like the Leo meme, Riley and Jacob occasionally jar. I completely understand why the writers would sit down and create a character like Jacob – he's talkative enough to sustain the game for quieter players, hesitant enough to let Riley be the leader, he's kind and sweet and gentle… but he's also a huge wet blanket. I just can't imagine enjoying spending a whole game with him. If I was Nancy, I would have chosen Steve, believe me. But who am I kidding, if I was Nancy Billy's mullet would have had me acting up.

The point I sort of wandered away from there is if you like the brooding tones of Stranger Things, you will feel right at home in the caves of Oxenfree. And if Max is your favourite character, all the better. PS have a bonus point for being extremely correct. As for my slight distaste for Jacob, I might just be in luck. A strange flashback (forward? Sideways? Unclear) shows Jacob dead in the water. Then Riley dead in the water. Then disappears. Even with me controlling her, Riley's reaction to this was far too understated, but the mystery of it all is still compelling. We also hear a gruff, unknown voice on the radio who hints – Riley and Jacob miss this, so I may be wrong – that he is from another timeline, and that he knows Riley, and has even met her in her future, his past. 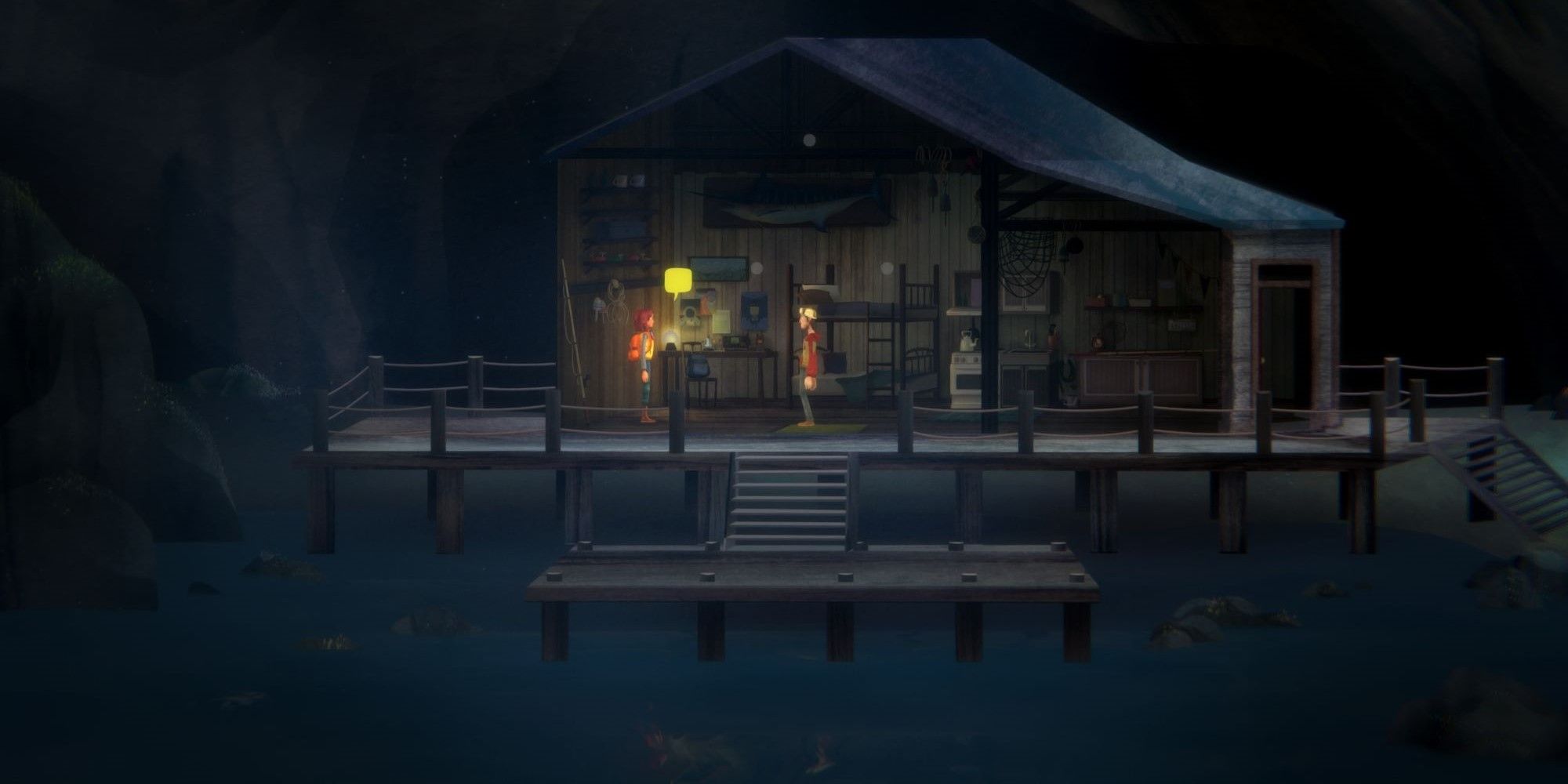 Time travel is a significant part of the game, tying it into the first Oxenfree. We encounter a time rift, a portal which takes you back in time only in the exact location of the rift itself, and both characters have clearly seen and used these before. Possibly earlier in the game, possibly earlier in their lives. It doesn't seem as if it will go all Tenet with its 'not where, when' bullshit, but I'm curious to see how the game uses it long-term. In the demo, it was merely a tool to a puzzle to climb to the next level in the cave, which is a little uninspired. Still, the extra filigree around the puzzle hints that there is more than meets the eye to everything I've seen so far.

Oxenfree 2: Lost Signals was near the top of my most anticipated games list after the initial preview, but with a few unanswered questions. My hands-on time with the game shores up its position, and offers a few answers, but throws even more questions into the mix. We'll have to wait until later this year to find out when Oxenfree 2: Lost Signals launches on PS4, PS5, Nintendo Switch, and PC.