For a game that's primarily focused on multiplayer matches, the Overwatch series is surprisingly heavy on lore. Every member of the heroic Overwatch organization or the villainous Talon has a huge personality, rich history and deep connections to one another. The game doesn't make such connections and plot points obvious just yet, instead giving players small teases and Easter eggs that allude to its larger story.

One such way that Overwatch 2 hints at its broader narrative is through the voice lines that characters exchange at the start of online matches. The original Overwatch contained a host of these fun voice lines, but Overwatch 2 expands on this collection with new conversations ranging from serious to surprisingly silly. Here are some of our favorite new voice lines so far. 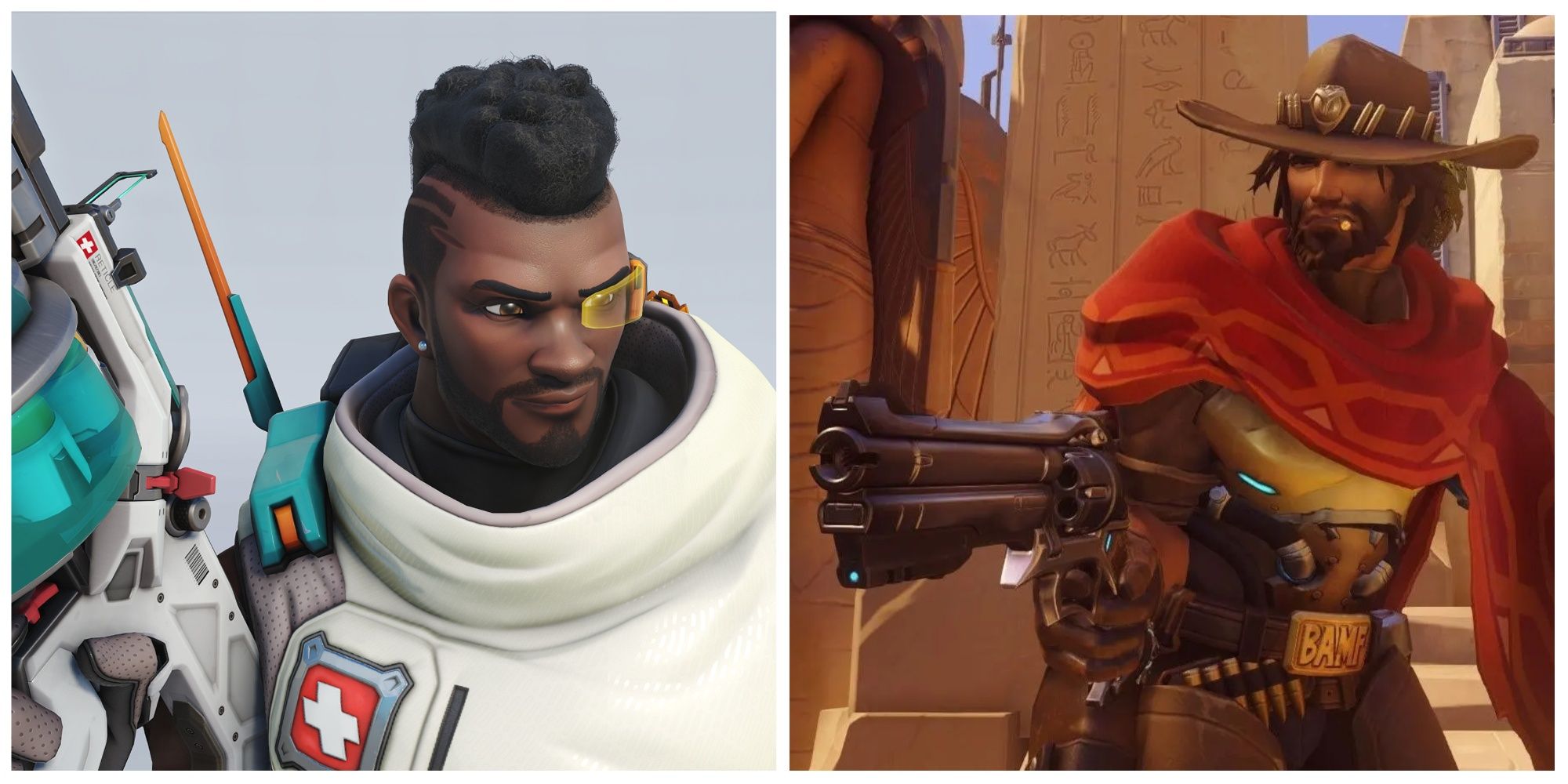 When it comes to heroic characters with spotty backstories, Baptiste and Cole Cassidy are among the most notorious. Baptiste's time with the nefarious Talon leads to an interesting exchange with former mercenary Cassidy, as he asks, "Want to know the bounty Talon had on you?"

Cassidy's only concern, however, is knowing whether the price on his head was higher than the one on Ana Amari, and Baptiste quickly reveals this isn't the case. The exchange is genuinely funny, and it also helps to flesh out the backgrounds of two interesting former villains. 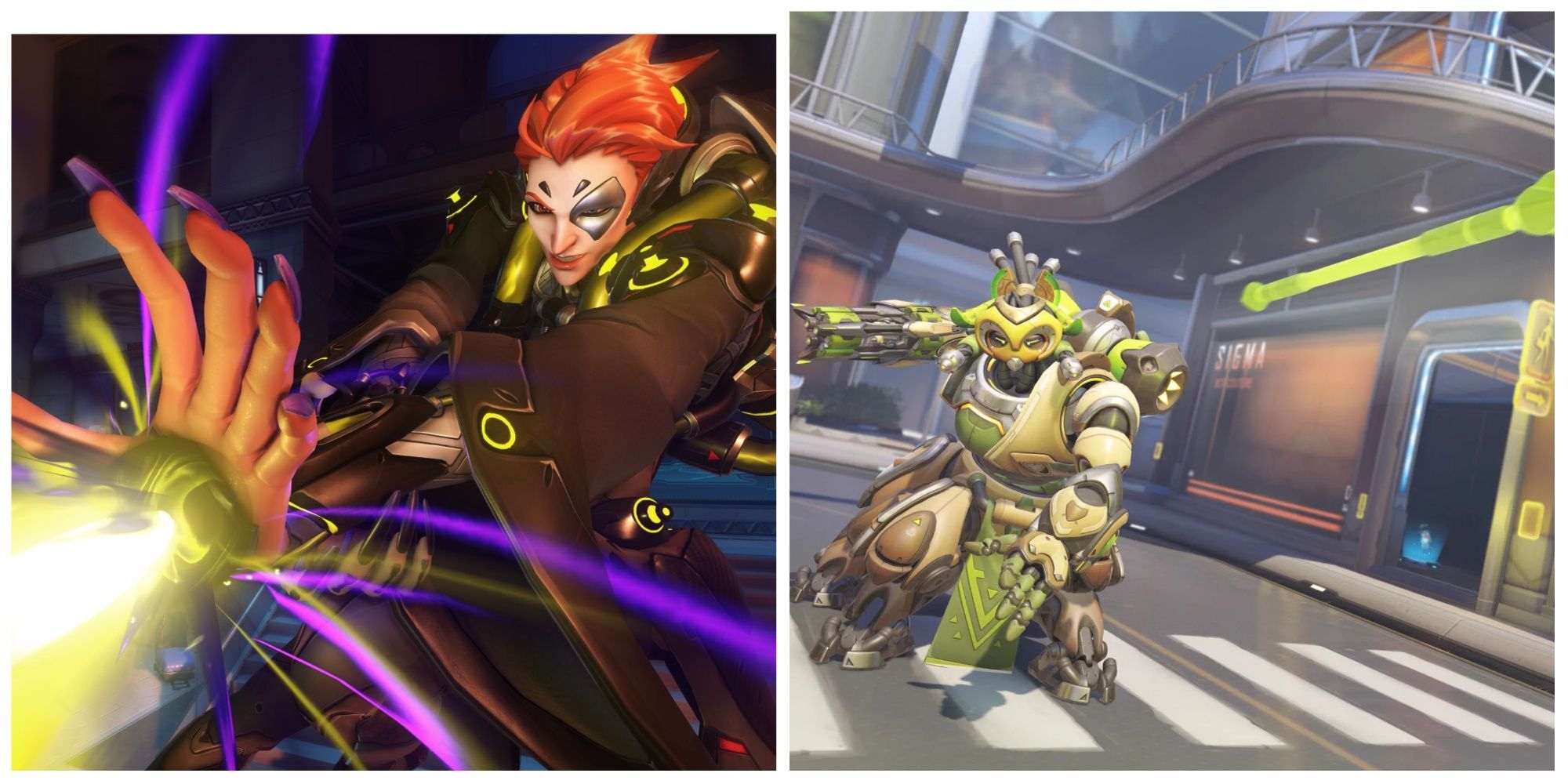 One of the most noticeable personality shifts in Overwatch 2 is that of Orisa, matching her radically altered moveset. No longer is this robotic warrior a sweet and innocent soul — while she still radiates kindness, Orisa has a much more threatening presence this time around.

Moira directly references the shift in Orisa's personality, remarking that "sweet Idina has become a domineering beast". The name "Idina" refers to the model number of Orisa's OR14 model of security bots, but Orisa was renamed by Efi, the young girl who reprogrammed her abilities and personality. She reminds Moira that her name is Orisa, and ominously cautions that she "would be wise to remember it". 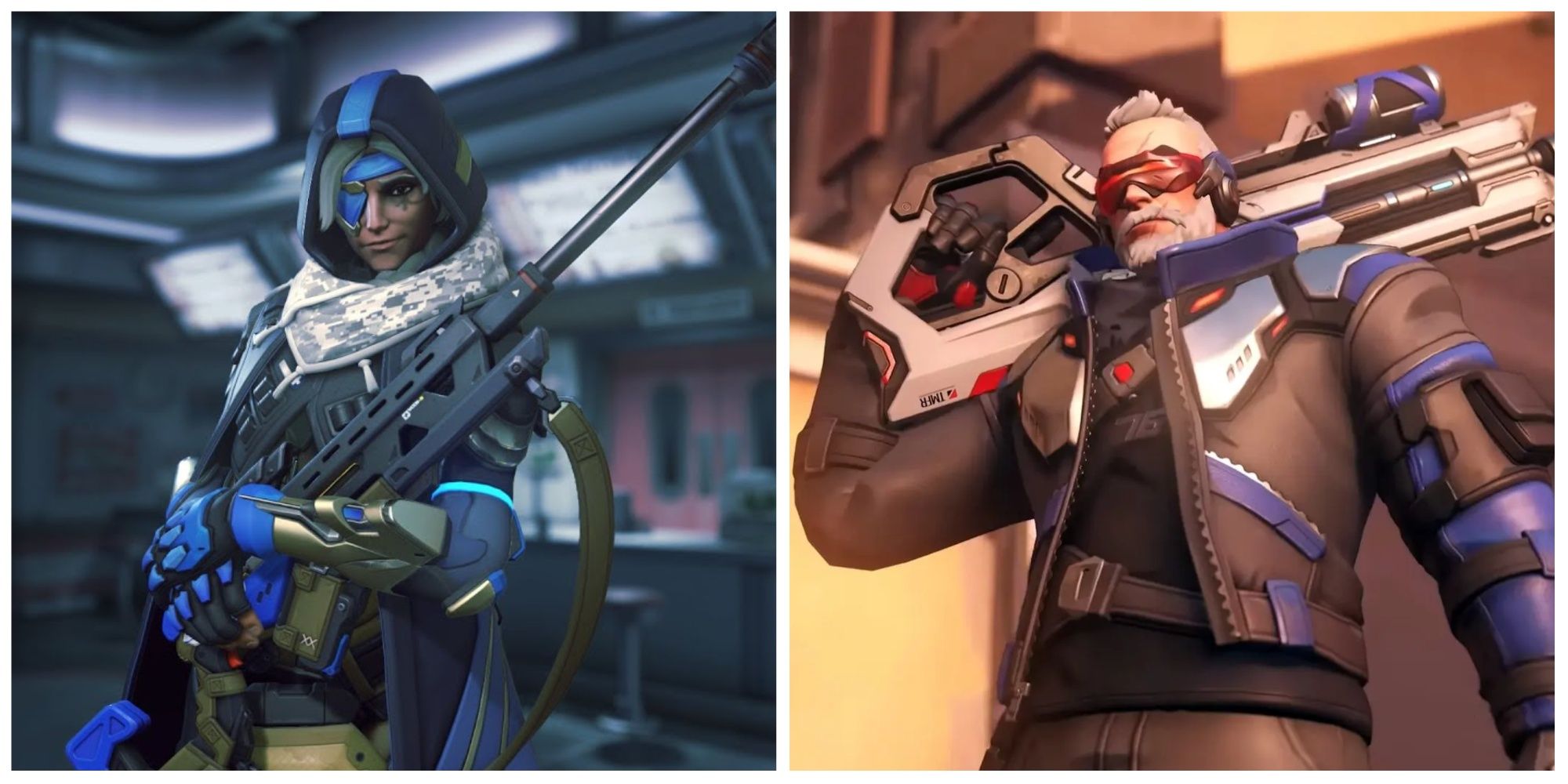 There is a great deal of history between the legendary sniper Ana Amari and the vigilante known as Soldier 76. Having served as two of the founding members of Overwatch at its inception, both soldiers' careers were marred in tragedy and vigilantism, with 76 continuing his rampage well into old age.

Ana comments on 76's one-man-army attitude, telling him that he "can't take Talon down by himself". 76 replies that she may be right, but that he's "always liked being the underdog". While we knew much of the history and relationship shared by these original Overwatch members already, watching it play out in real time gives their situation a new weight.

7/10 Winston's Terrible Jokes And Everyone 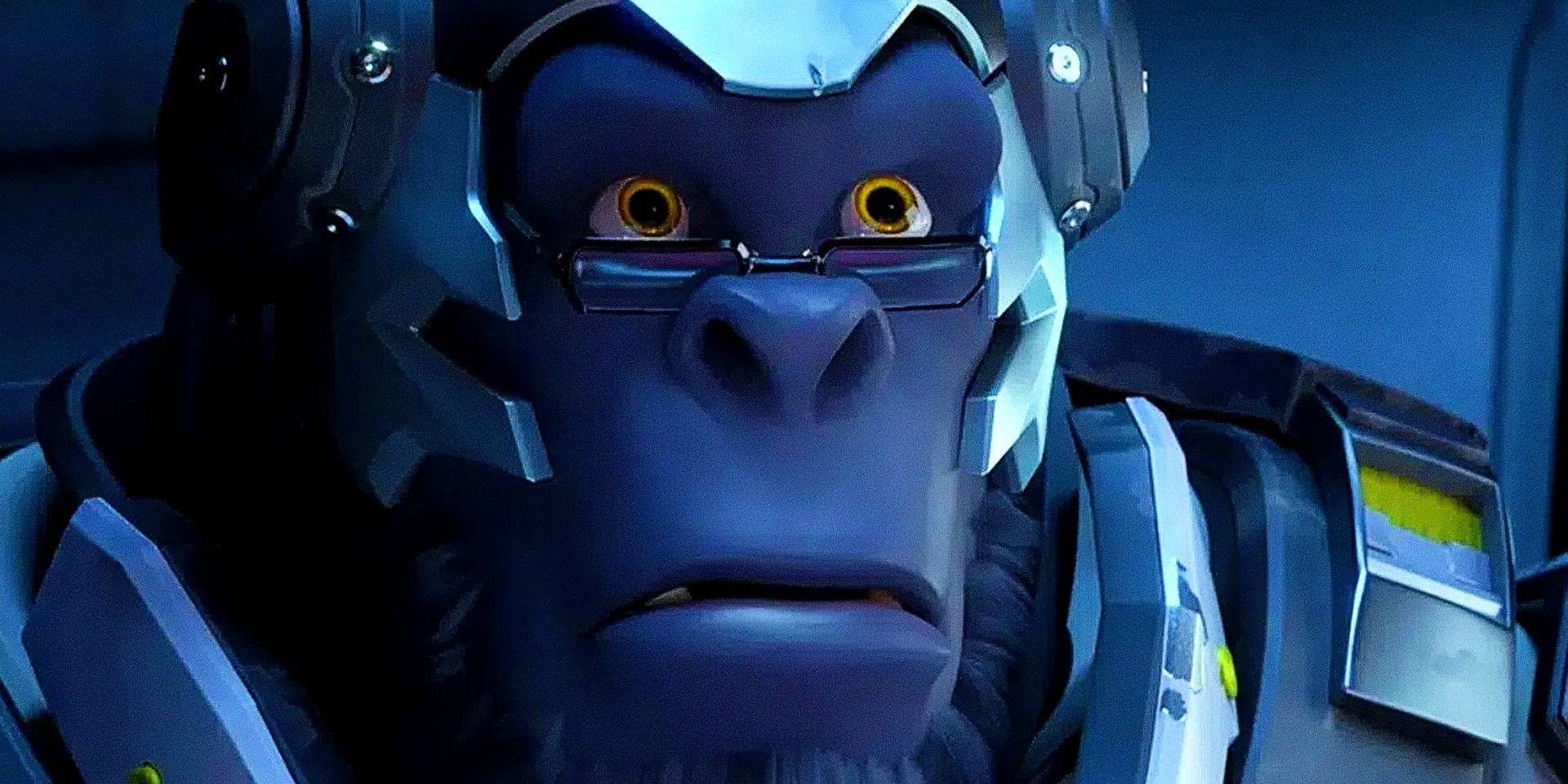 Some of the best dialogue in Overwatch doesn't revolve around major plot beats, but rather enjoying this colorful cast of characters interact with one another in goofy and unexpected ways. Such is the case with everyone's favorite talking ape, Winston, who will seemingly ask anyone available if they want to hear his "favorite Periodic Table joke".

Unfortunately, the list of those willing to listen is short. Pretty much anyone he asks will turn him down, usually in comedic fashion. Notable examples include Genji's extremely dry "I do not", Cassidy's "I'm still puzzling over the last one", and the only two good sports in the game, Moira and D.Va, both of whom respond with the same "Na/nah" pun ("Na" being the periodic symbol for sodium) which gets a chuckle out of Winston. 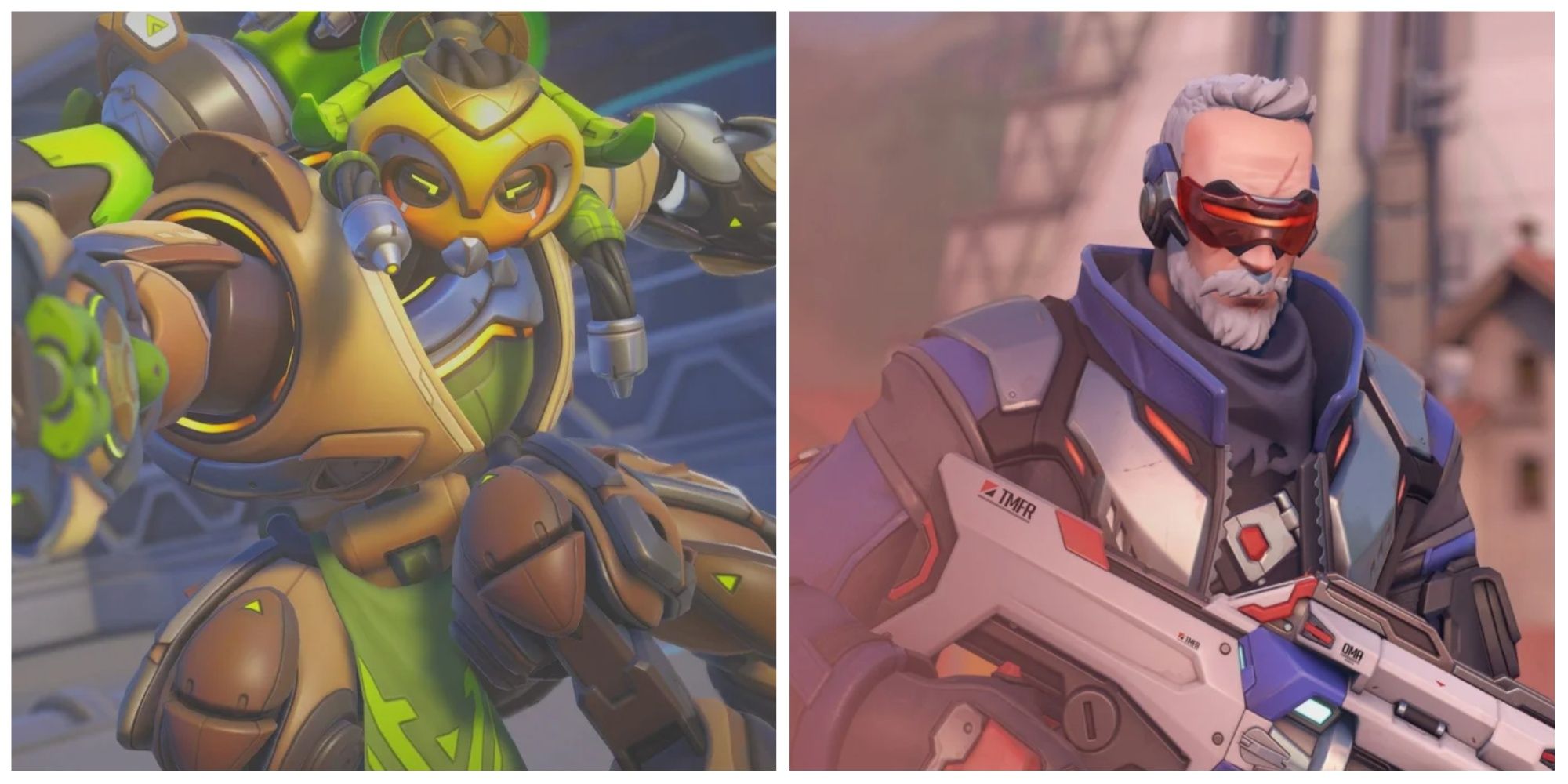 Another example of Orisa's scathing new personality traits occurs when Soldier 76 asks her about her experience "chasing Doomfist out of Numbani". Orisa replies, "Making a coward run is no challenge", which is a line with enough force to completely wipe Doomfist off of the map out of sheer embarrassment.

Thankfully for him, she only says it before the match begins, but seriously. Ouch. 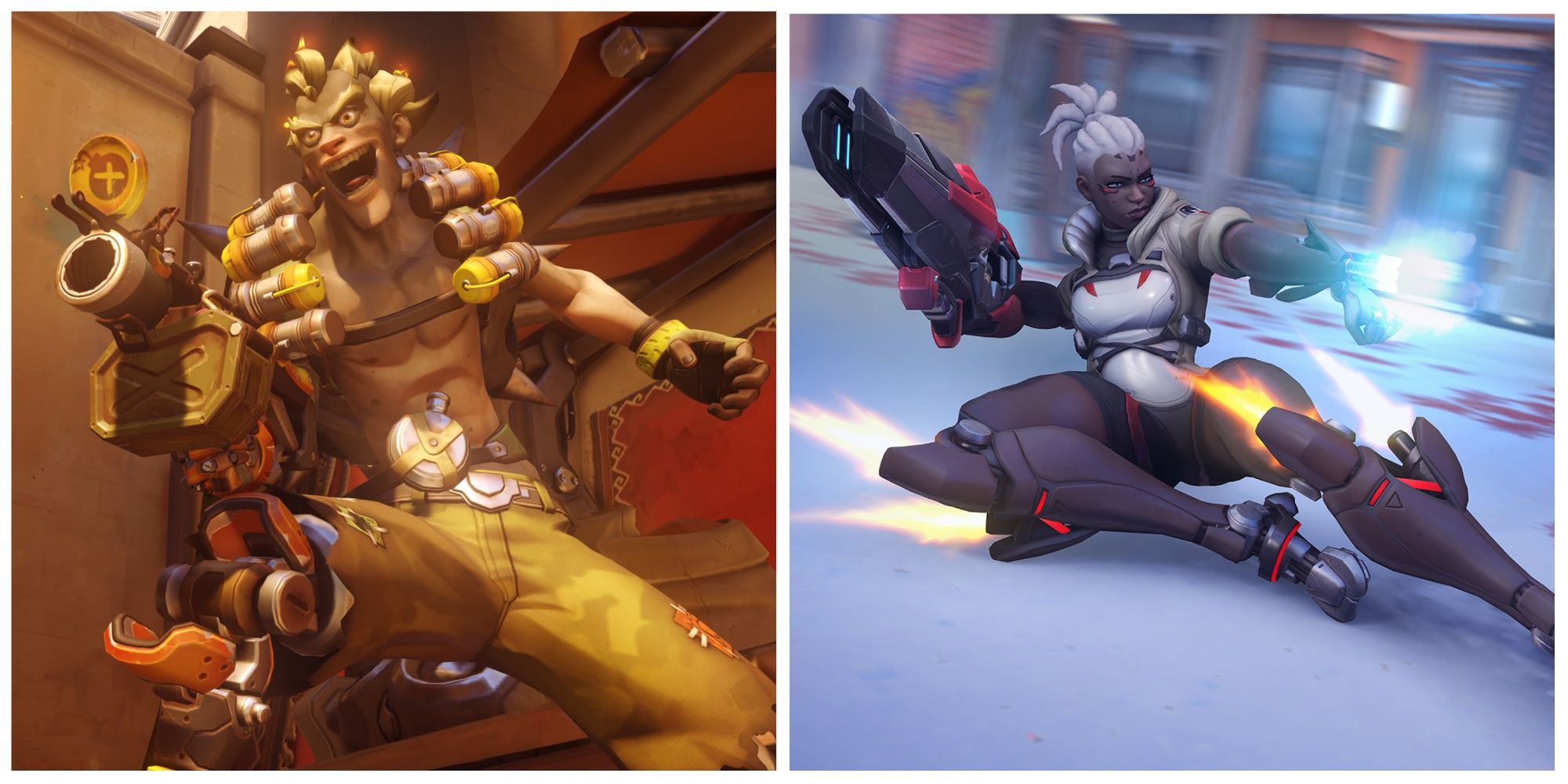 Junkrat has a lot to say in Overwatch 2, and a few of his conversations involve characters you might not expect. Though no one seems to enjoy the chaotic explosives expert's company much, he's extremely enthusiastic to be here, and some of his dialogue alludes to him being brought in as a proper member of the team.

When Junkrat and new hero Sojourn are in a party together, Junkrat replies that "the Overwatch strike team prepares for action!" After Sojourn tells Junkrat to keep the comms clear, he remarks that this is "the discipline the commander is known for", implying that he's a proper member of the Overwatch task force despite his criminal history. Sojourn, who replies that she's about to be known for kicking Junkrat's butt, seems less than enthused. 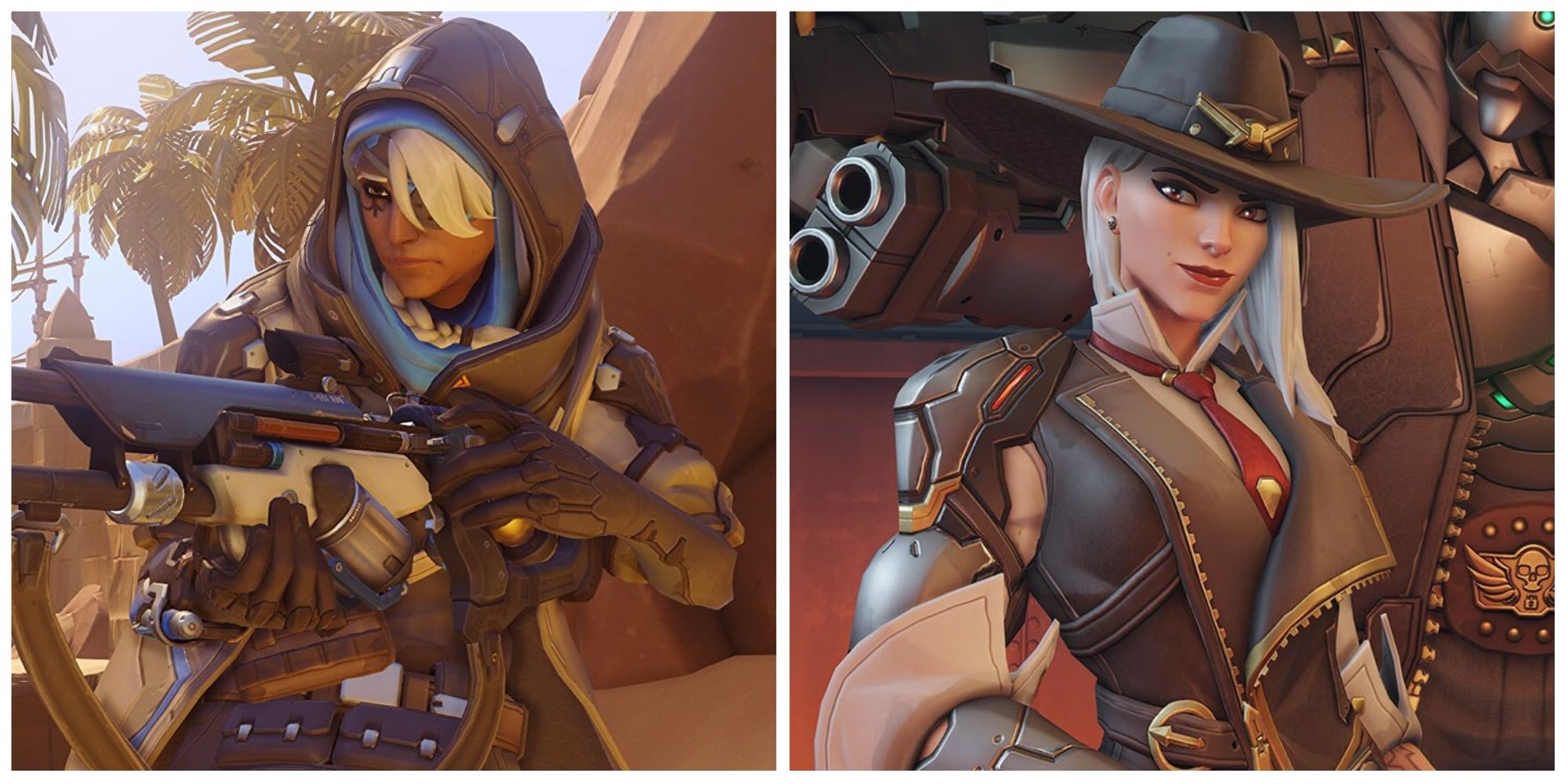 Overwatch is a game about friendly competition, and this sometimes extends into the game's dialogue. One such exchange happens between Ana and Ashe, after Ashe remarks that she's heard that Ana is a good shot. She then adds, "hope you don't mind that I'm better".

Ironically, Ana's immediate response will be noted in the history books as her greatest shot ever. "I know better than anyone," she slings back at Ashe, "that a head that big is an easy target." Between Ana and Orisa, Overwatch 2's pre-match spawn rooms are feeling decidedly less safe from burns. 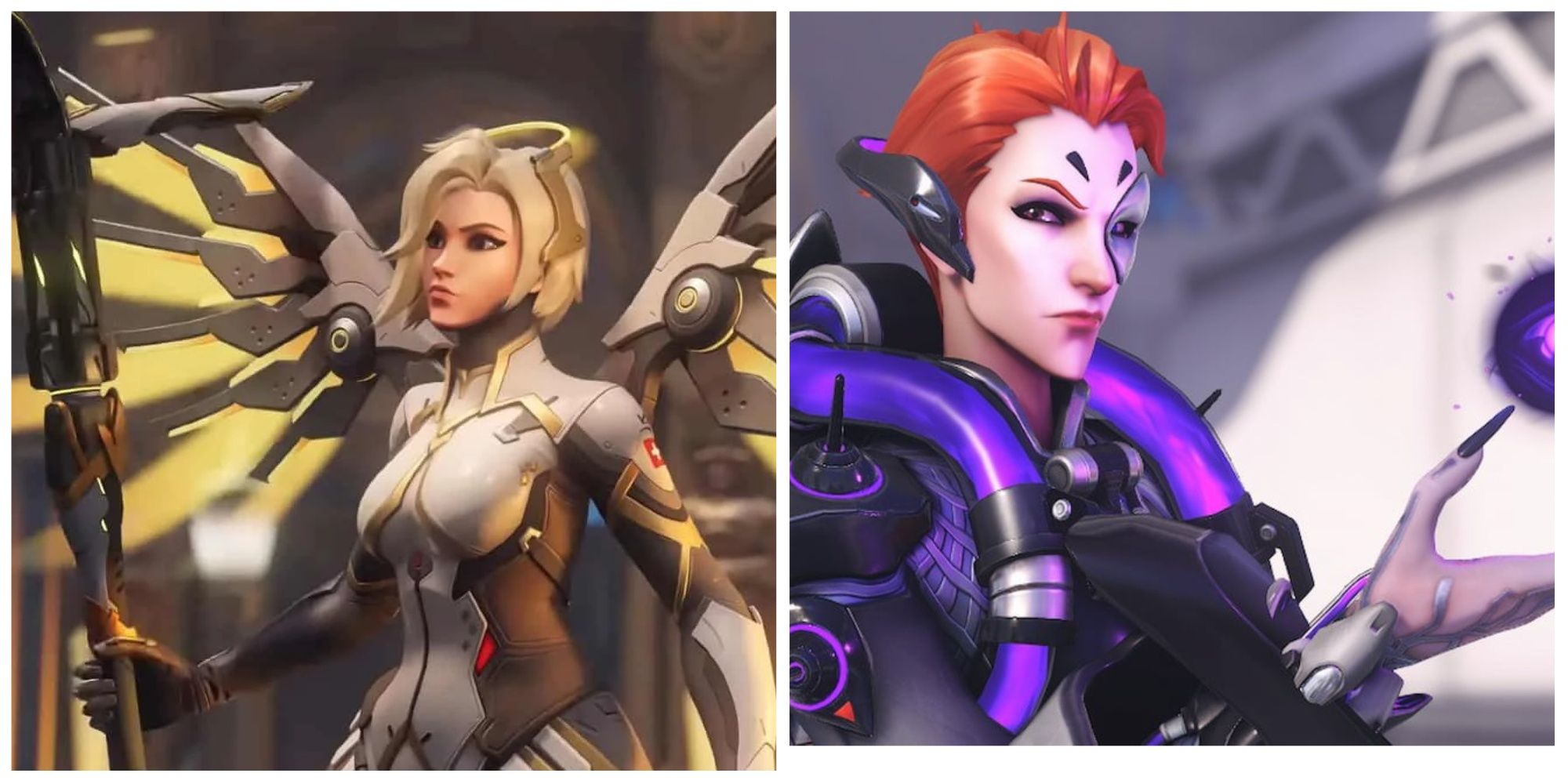 A new, short exchange between Moira and Mercy manages to encapsulate the differences between the two scientific healers. Mercy, usually one of the more kindhearted and supportive heroes, expresses to Moira that she would rather wait "a century for progress" than cause the damage and destruction that Moira's experiments have left in her wake.

Moira coldly replies that it must be nice "to feel entitled to patience", demonstrating that the scientist feels that she has no choice in the matter. It's a rare bit of transparency from the outwardly distant Moira. 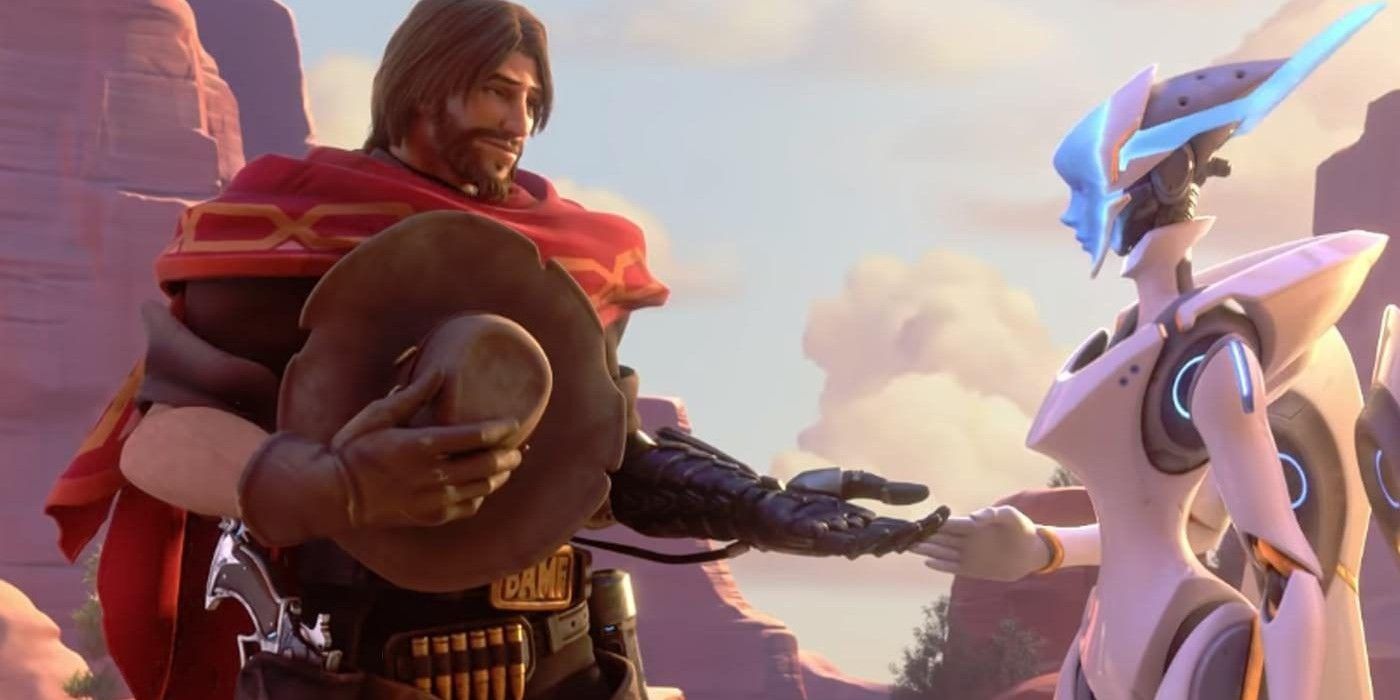 Echo was the last hero added to the original Overwatch, which limited her interactions with many of the other heroes in that game. Overwatch 2 has the chance to remedy this, and it takes advantage, particularly when it comes to her unique relationship with Cole Cassidy.

In the overarching lore of Overwatch, Cassidy spent a great deal of time with the scientist responsible for Echo's abilities and personality, Mina Liao. As such, he is now extremely close to Echo, as evidenced by their numerous exchanges. One has Cassidy offering to buy Echo a cowboy hat after she comments on his, and another has Echo repeating Cassidy's name, stating that she simply loves to say it. It doesn't get much more adorable than that. 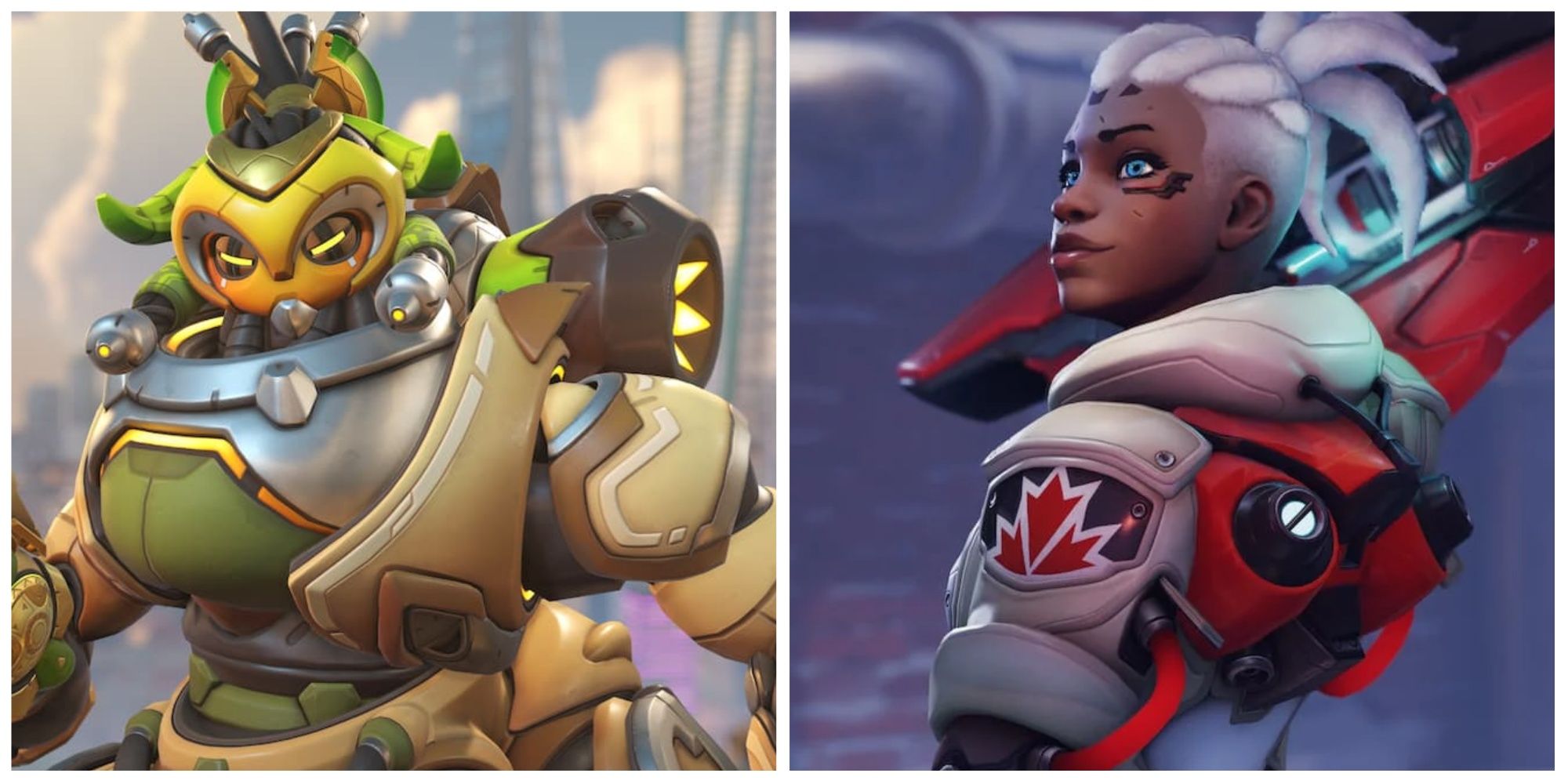 Overwatch 2 examines the role that heroism plays in the lives of the rest of the world, with the actions of its characters having heavy and prolonged effects on the lives of the planet's citizens. This is often framed in a negative light, but Orisa and Sojourn's more jovial conversation revolving around the in-universe Overwatch cartoon is both lighthearted and touching.

It seems that, for Orisa's original creator Efi, Sojourn was her favorite character. Sojourn responds humbly, telling Orisa that the cartoon portrayed her as though she were a superhero. As she tells Orisa, "the reality was not as inspiring". Orisa replies that she is grateful to Sojourn for providing Efi with "courage when she needed it the most", a remark that Sojourn is sincerely appreciative of. The wholesome exchange is a perfect example of the heart and character that Overwatch 2 brings to its characters.