We are excited to bring Transform 2022 back in-person July 19 and virtually July 20 – 28. Join AI and data leaders for insightful talks and exciting networking opportunities. Register today!

The final numbers from the Pitchbook-NVCA Venture Monitor show that the second quarter was a mixed bag for the U.S. startup ecosystem.

While deal count and fundraising by VC funds remained strong in Q2, economic worries and the war in Ukraine made everyone more cautious. Deal values across all stages and VC-backed public listings were hit harder by the economic downturn, the report said.

The quarterly report is jointly produced by PitchBook and the National Venture Capital Association (NVCA) with support from Insperity and J.P. Morgan.

While deal count remained strong, when compared with the highs of 2021, deal value declined significantly across all stages. The mega-deals that defined 2021 slowed in the first half of 2022 as investors took a more cautious approach. With more than $230 billion in dry powder, and nearly 3,000 funds closed since the beginning of 2019, the VC industry is likely to see the trends of steady deal count but readjusted pricing continue until certainty returns to the market.

Join us at the leading event on applied AI for enterprise business and technology decision makers in-person July 19 and virtually from July 20-28.

SPAC mergers (special purpose acquisition companies, which bypass IPO procedures) also declined in Q2, bringing the total number of public listings (for IPOs and SPACs) in the first half of 2022 to 42. This decline is most concerning for the potential for billion-dollar exits, as IPOs have historically been the main source of liquidity for private companies operating at that scale. This decline is also concerning because VC-backed IPOs have traditionally had an outsized positive impact on the U.S. public markets.

“The second quarter of 2022 brought an expected continuation of market tightening in some parts of the U.S. venture ecosystem,” said NVCA president and CEO Bobby Franklin, in a statement. “However, the industry’s record dry powder continues to fuel critical innovation that is addressing the country’s important needs. The venture industry’s long-term view of investing, even during uncertain fiscal times, is further proof it is a reliable economic engine with an eye toward funding the next generation of great American companies.”

“As the market continues to react to volatility over the past six months, the venture ecosystem demonstrates strength as dry powder reaches new heights and fundraising levels surpass more than $100 billion for the second consecutive year,” said John Gabbert, founder and CEO of PitchBook, in a statement. “Exits remain extremely low while late-stage companies act with caution as a result of bearish public market activity. There are still uncertainties as to what to expect in the second half of the year; however, market indicators show resilience to weathering the potential economic downtown.”

Seed-stage investments are generally furthest from the public market and have been relatively insulated more than the rest of the industry from economic volatility. The Q2 estimated total seed deal count is near the highest figure to date.

A substantial decline in late-stage deal count has yet to surface in the data, but average deal size and valuation have fallen significantly from recent highs.

U.S. VC fundraising has exceeded $100 billion for the second consecutive year. A strong showing from established managers in the first half of the year has pushed capital raised to a near record.

Through six months, the report tracked $121.5 billion closed across 415 funds, making 2022 already the second-highest year on record for U.S. VC fundraising and the second consecutive year this total has exceeded $100 billion.

First-time fundraising has had a more difficult start to the year, raising just $7.6 billion after a record $16.8 billion was raised by new managers in 2021. 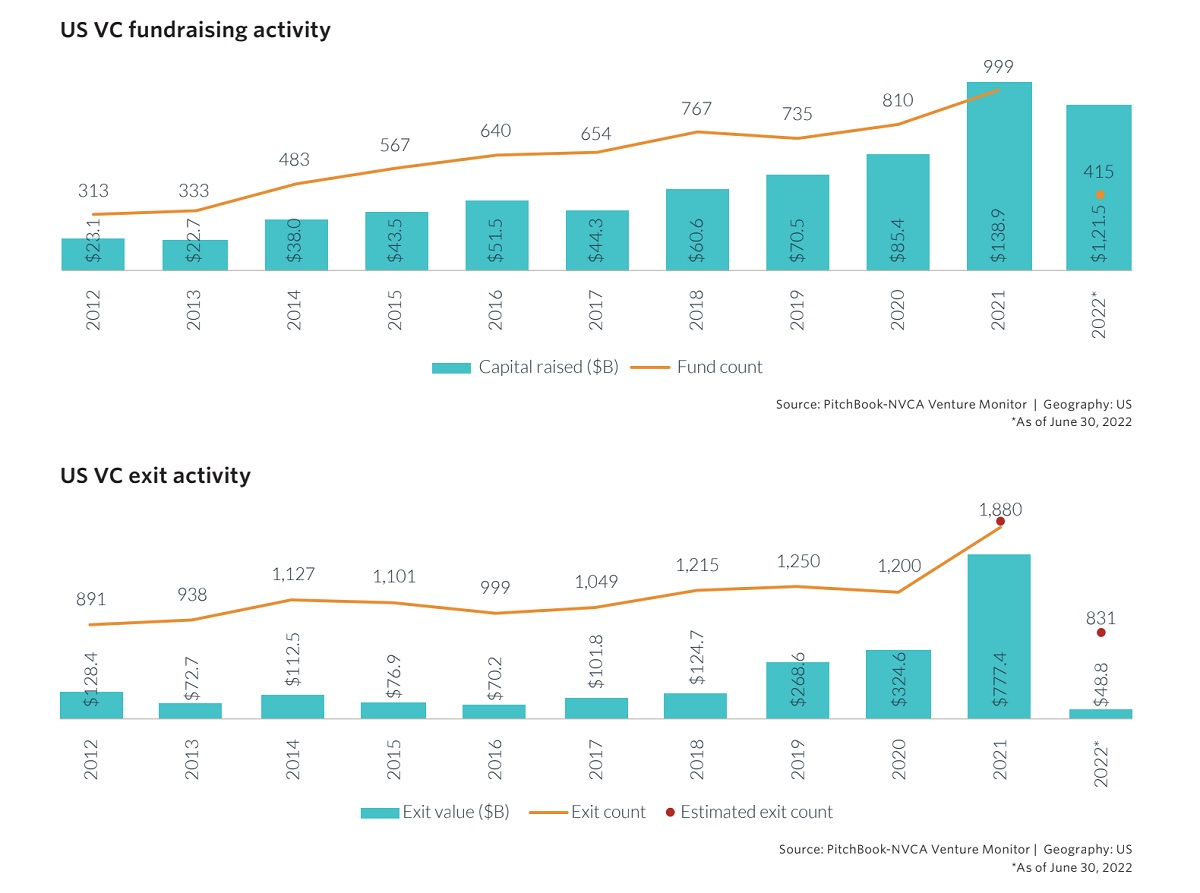 Q2 2022 saw very similar exit activity to Q1 as counts tracked to the historical pace of 1,100 annual exits that the NVCA saw from 2014-2020, with exit value lagging the last three years.

Corporate M&A exit count remained steady with more than 200 deals closed in Q2. With public listings halted, private companies may be looking to strategic acquirers as a more viable liquidity option, albeit with exit value expectations readjusted to align with overall repricing happening across the ecosystem.

“Over the last quarter, the pace of fundraising has slowed sharply and valuations (mostly in the later stages) are beginning to correct,” said Pamela Aldsworth, head of venture capital coverage at J.P. Morgan Commercial Banking, in a statement. “We expect valuations will come down across all investment stages as this cycle plays out – and in our view, this is a healthy resetting of the bar. But if the next few months are as quiet as we anticipate, founders will need to make some tough choices to preserve runway. Meanwhile, with IPO markets currently unavailable, a consolidation wave could be just around the corner.”

VentureBeat’s mission is to be a digital town square for technical decision-makers to gain knowledge about transformative enterprise technology and transact. Learn more about membership.