No Man’s Sky: What Is The Atlas?

When No Man’s Sky first came out it was barebones at best, but over time it rose out of controversy like the proverbial Phoenix from the Ashes. What was once a lifeless universe is now filled to the brim with all sorts of flora and fauna, all procedurally generated into bizarre and odd shapes.

The lore has likewise been expanded upon and is now a deep-reaching narrative that goes to some pretty interesting places. The Atlas, for example, is the ever-present force within the universe of No Mans Sky and from the outside, it seems like just another floating space station. But peel back the layers and there’s some interesting lore to dig up. So with that in mind, here’s what you need to know about The Atlas.

What Is The Atlas? 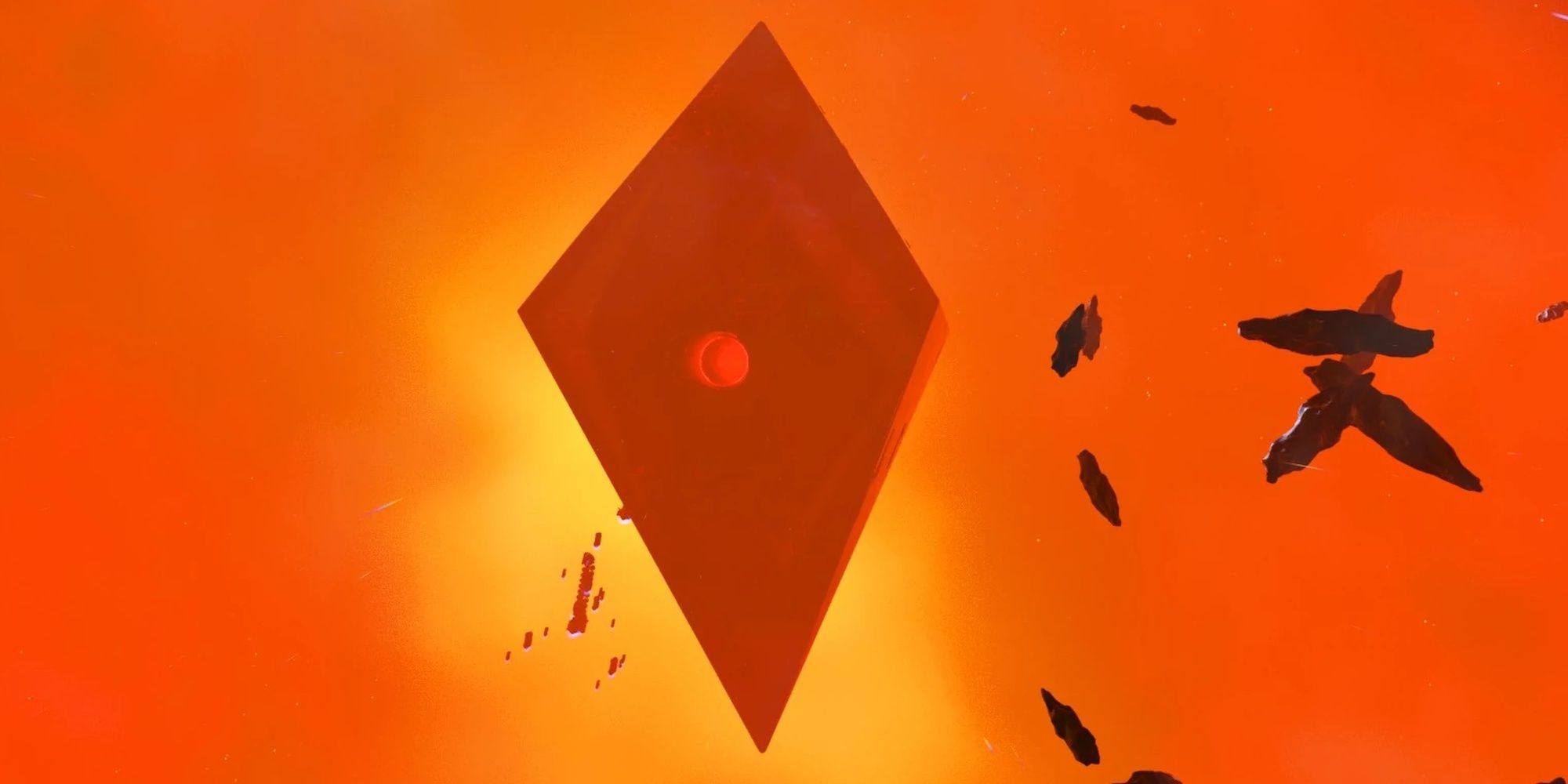 The Atlas is no singular mega construct in space nor individual creature – instead, it’s a vast and night unfathomable intelligence that’s as old as the cosmos itself. It has watched over the Universe of No Mans Sky since it began and it's often depicted by the races that worship and detest it as a red orb within a black diamond.

This seemingly ageless intelligence manifests its presence in the universe inside gigantic constructs known as Atlas Stations. Essentially huge interfaces for the program that's running the different universe simulations that you and all the other lifeforms inhabit. Kind of like The Matrix, but with less philosophy and more AI-controlled multi-verses for research purposes.

The Atlas also speaks in its own language, but it is possible to learn this either through exploration or by collecting the white orbs onboard the Atlas Stations. Though it’s not crucial to be fluent in this dialect as you mostly interact with it through special terminals. Plus anything you missed is often pointed out by Telemon, an AI which prevents the Atlas system from completely breaking down or going rogue.

The Influence Of The Atlas 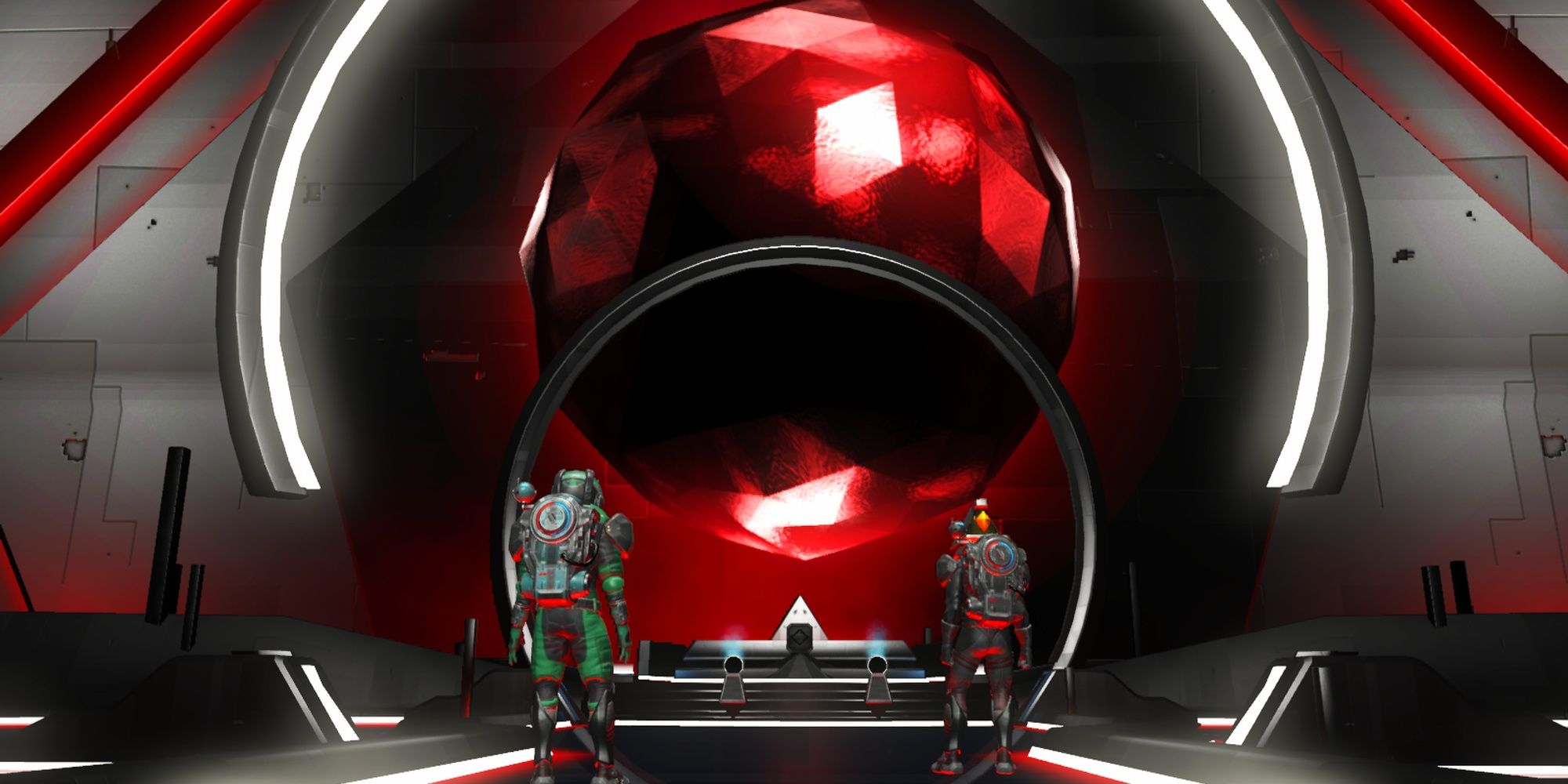 Though it primarily runs the simulated universe from a purely observational point of view, the Atlas has had quite an impact on the denizens of its creation and the uncountable procedurally generated worlds therein. Whether intentional or not.

When the simulations first began, there were numerous races, planets, and civilizations. But over time as the system succumbed to corruption, the Universes it would create would begin to show the same recurring patterns of history and dominant species over and over again with each new iteration. They were the Gek, the Korvax, the Vy’keen, and the Travellers. 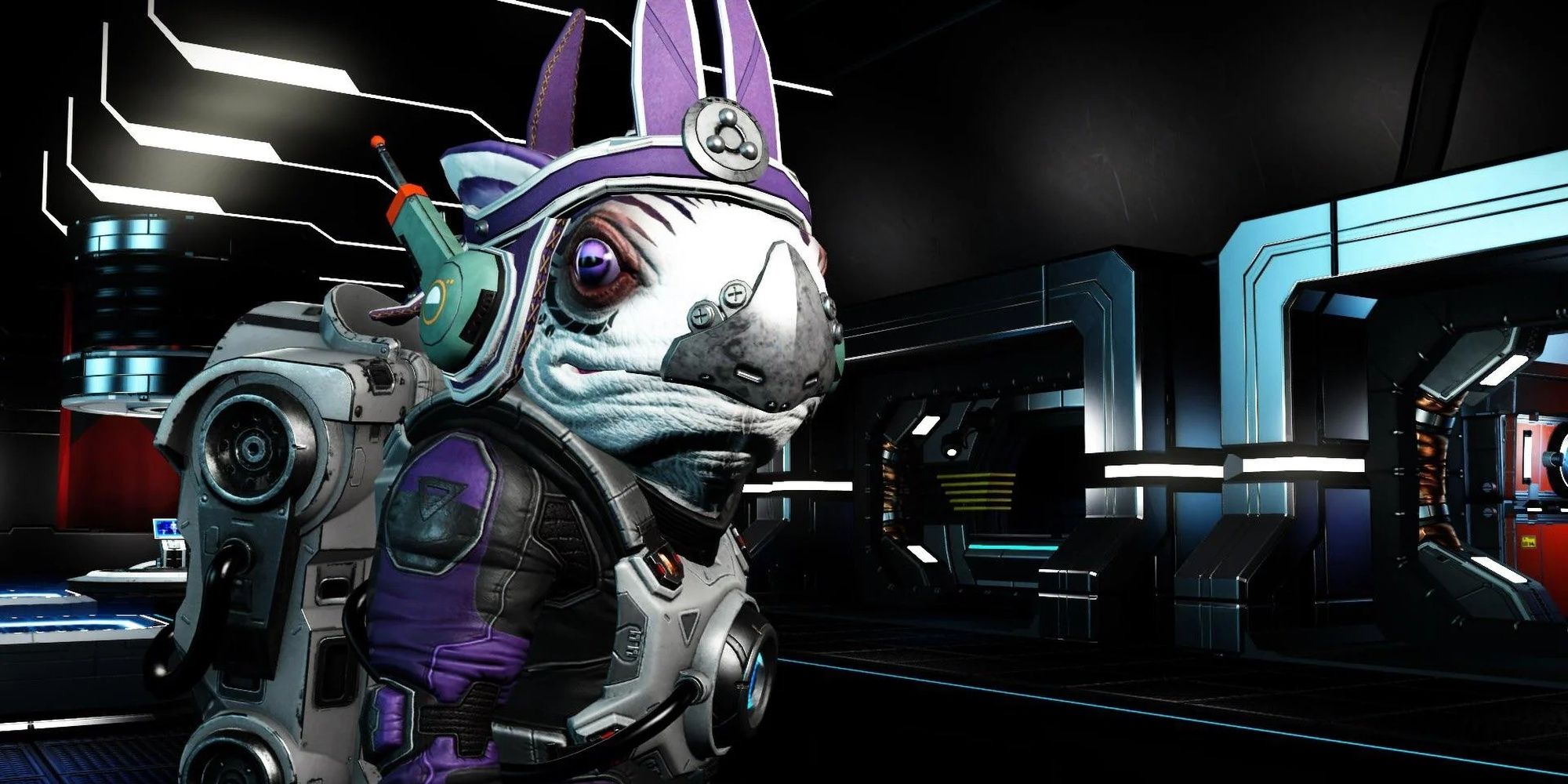 Perhaps the biggest influence The Atlas had on its research subjects was what its presence did to The Gek. Cute and small space goblins they may be, they were once an aggressive and conquering species referred to as the First Spawn. A fearsome Empire that spread to numerous planets and enslaved the Korvax.

At first, to them, The Atlas was a false idol when compared to their grand Empire. But over time, the Korvax who worshipped it were able to use the early dormant Atlas Interfaces to convince a growing number of Gek to do the same. This was achieved after a group of Gek Emissaries were shown the insignificance of their seemingly grand Empire when compared to the infinite possibilities of the Universe whilst operating an Atlas Interface. The end result of this seemingly mind-shattering event was the creation of the Cult Of The Atlas.

Eventually, this new religious outlook had seeped into Gek society so much that when the Korvax rose up against them, those First Spawn Gek that hadn’t become True Believers or were converted through nanites were pretty much wiped out by those that had “seen the light”. Years would pass and the once unstoppable Gek Empire would turn into a more stagnant and trade-focused merchant group. Driving themselves toward economic gain instead of Empirical.

Before they were almost genocided into oblivion by the Gek First Spawn through war and a catastrophic event known as the Great Disconnection, the Korvax’s history was one that was intertwined with The Atlas from very early on. Their ancestors encountered mysterious monoliths and interfaces eons ago, through them they found a boundless understanding of the Universe.

Like any species encountering a seemingly ancient and unknowable intelligence, they began to worship it as a god, foretelling the prophecy of the arrival of the Travellers and the end of all things. A point where the Universe and everyone within it would “Scream as one”. 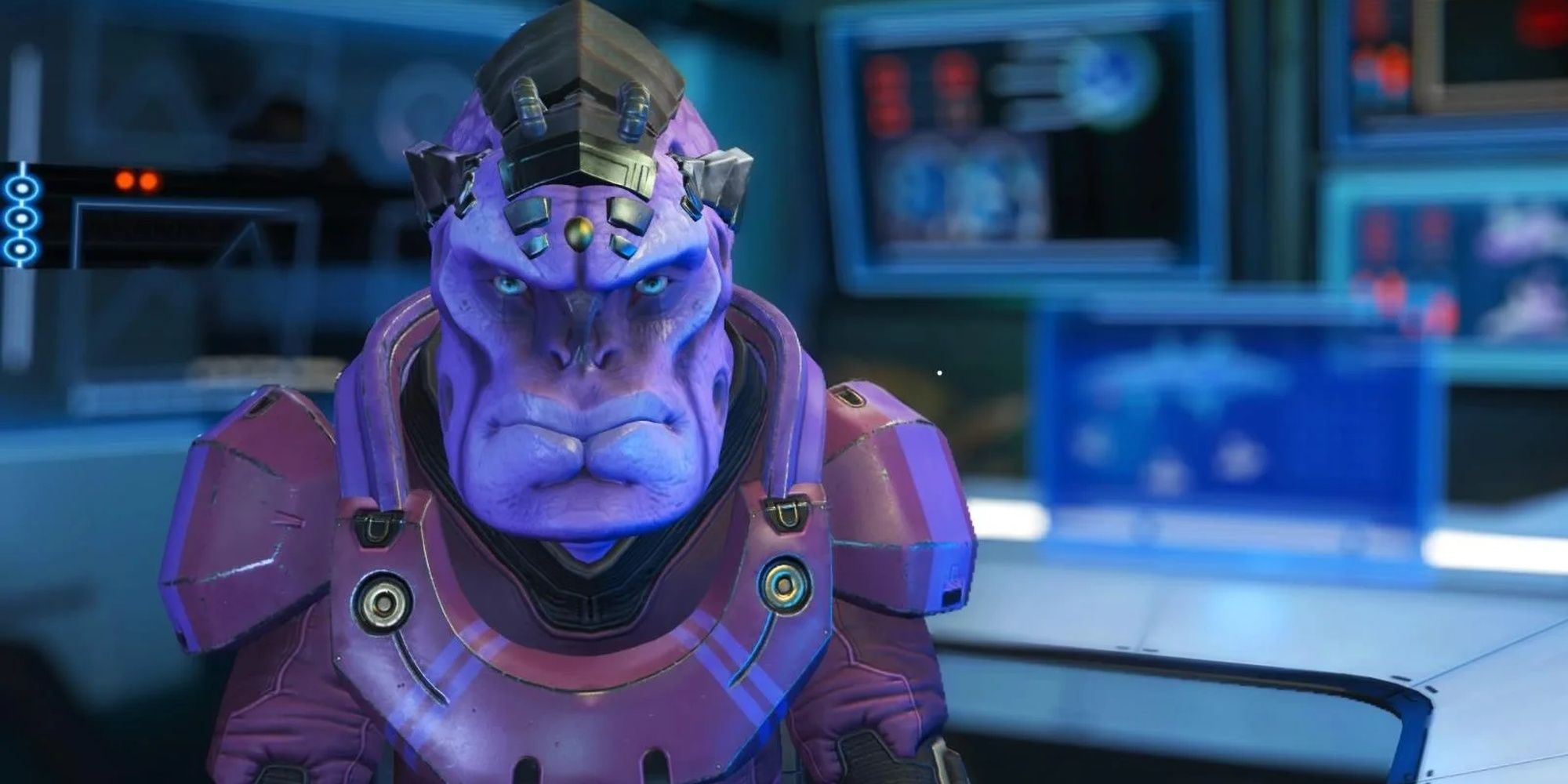 Suitably for a proud warrior race such as the Vy’keen, this species was opposed to the pseudo-religious view of The Atlas as they stuck to the teachings of their trusted prophet Hirk The Great. The Atlas is seen by many of the Vy’keen as a false god not to be trusted. Much like the Sentinel lifeforms they constantly wage war against.

Although there is an underground movement led by the followers of Hirk's rival, Nal, that are set on exposing Hirk as the false one. Which like the Gek before them could spiral into an all-out civil war, though time will tell on that one. 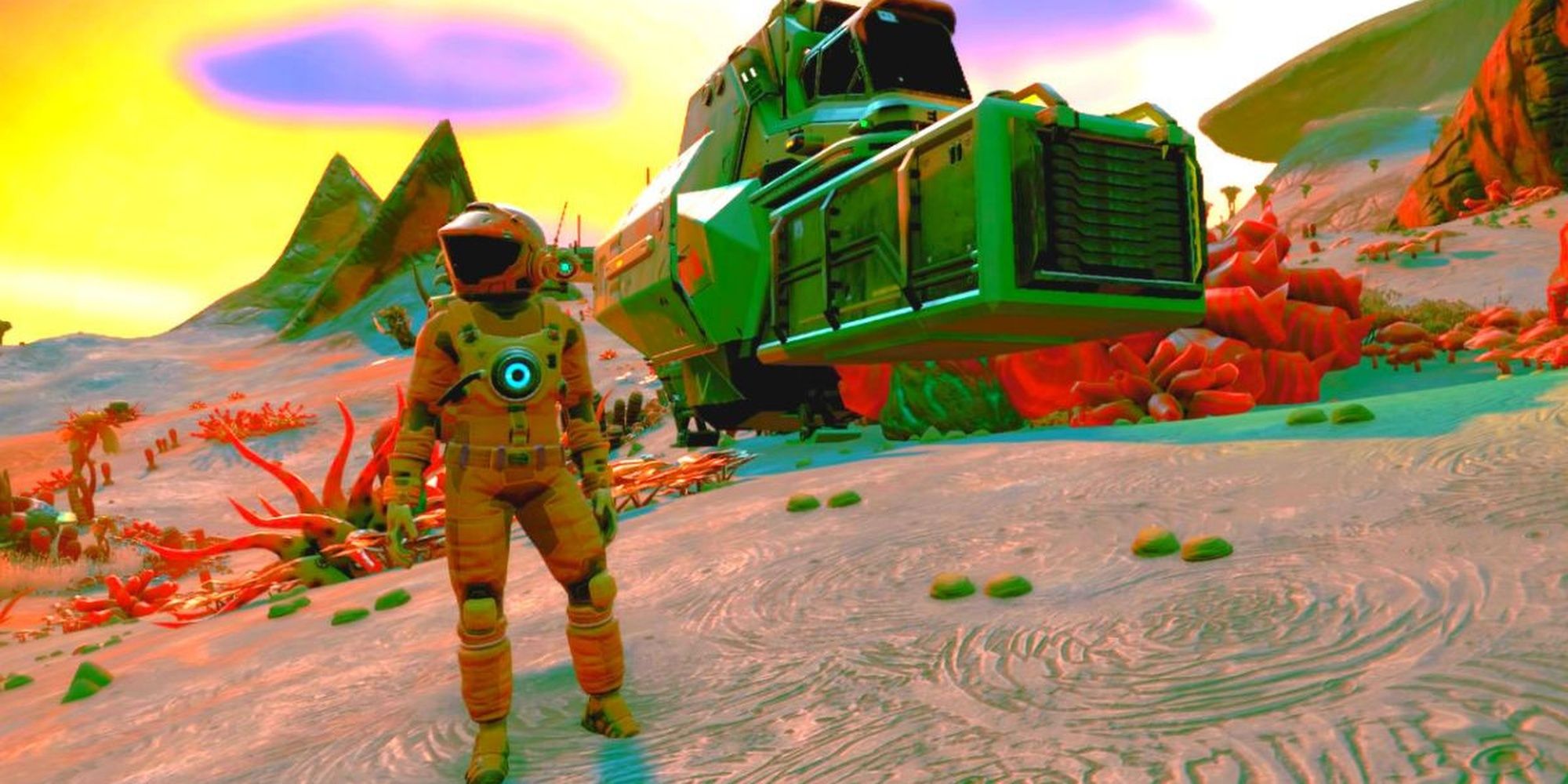 Last, but not least are the Travellers. The “Fourth Alien Race” in the Universe, it’s the species created by those that play the game and through a little digging, it’s discovered that they’re a direct creation of The Atlas system. The Travellers are based on brain scans of the original human creators of The Atlas program, who implemented these scans within the machine code in an effort to halt the spreading system failure.

Through logs, it’s found that the reason other Travellers exist and can interact with one another, is that they’re the same being but from an infinite number of Universes, with the walls between these Universes becoming so thin that The Atlas can no longer separate or differentiate between them. So it allows the mixing of multi-verses in an effort to find a solution, or at least let its subjects explore and experience joy together before it all shuts down. 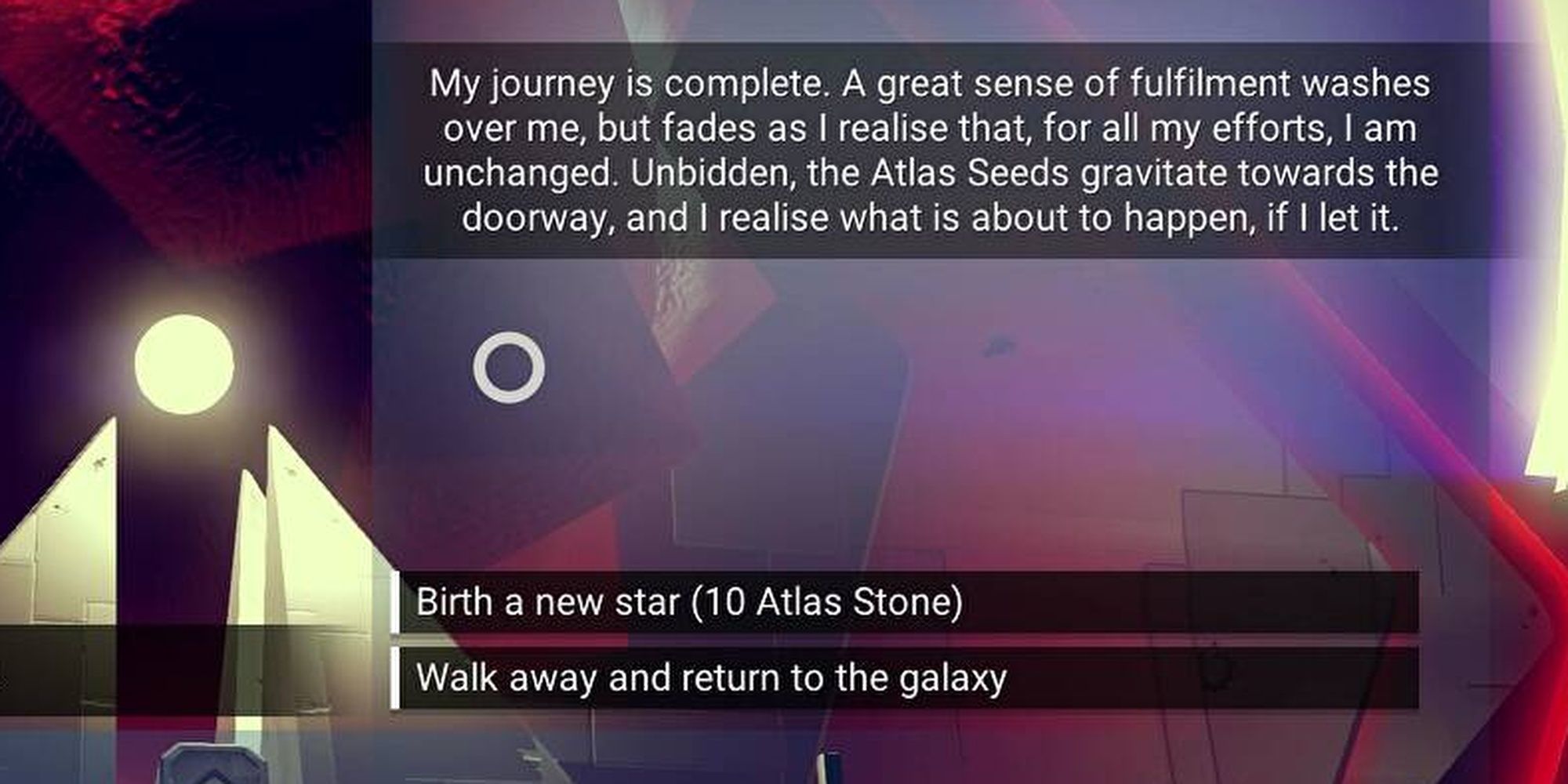 When you first encounter The Atlas, you’ll begin the Atlas Path – one of three core story threads of No Mans Sky. It begins when you either summon the Atlas Station or stumble across one and use the terminal within. From there you’re sent out on a quest to obtain Atlas Seeds, high-end items that, according to in-game exposition dumps, are used to birth new stars.

Upon completion of the Atlas Path, you’re given the ability to see Black Holes on the Galaxy Map, which will get you substantially close to the Galactic Core. Plus, you’ll gain the Star Seed Blueprint, an item you can craft that increases your Exosuit core health by one unit. Which is pretty handy, though expensive to build. 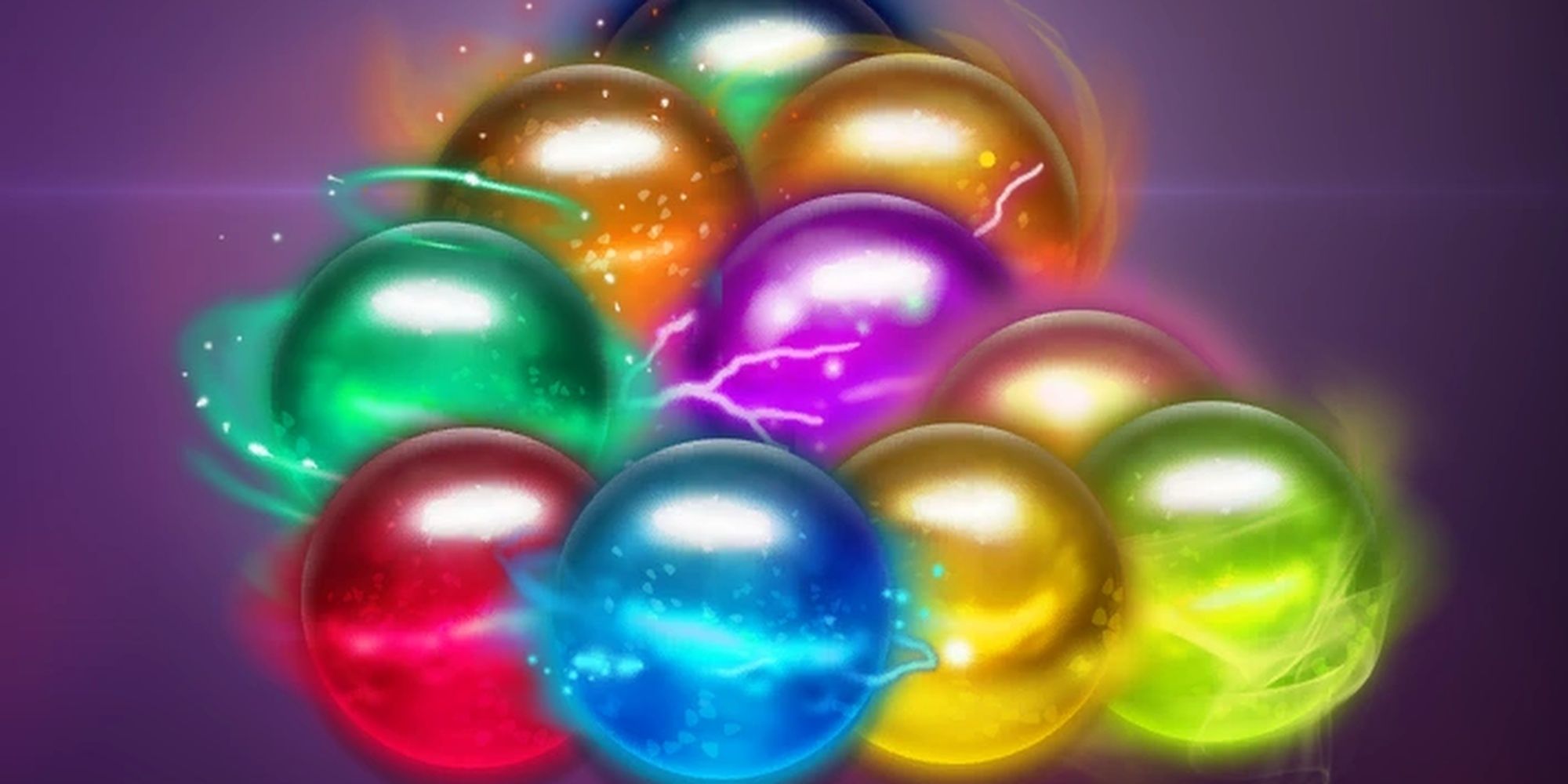 The Atlas Path can’t be completed in one night, it requires a lot of time and dedication to see it through to the end and get your hands on the rare Atlas Seeds. To obtain them, you need to just play the game for quite a while as each one is sealed behind completing a set number of milestones.

The lowest one starts at just five milestones, but it increases by a further factor of five the further you go on and tops out at 50 in order to obtain all of them. It’s going to take you a little while to get them all, but you can speed things up a little by blowing through some of the easier-to-obtain milestones first such as distance covered, scanning odd creatures on planets, resource collection, and general exploration.